After the pandemic hit, we cashed in on our house and moved into a camper van

After the pandemic hit, we cashed in on our house and moved into a camper van 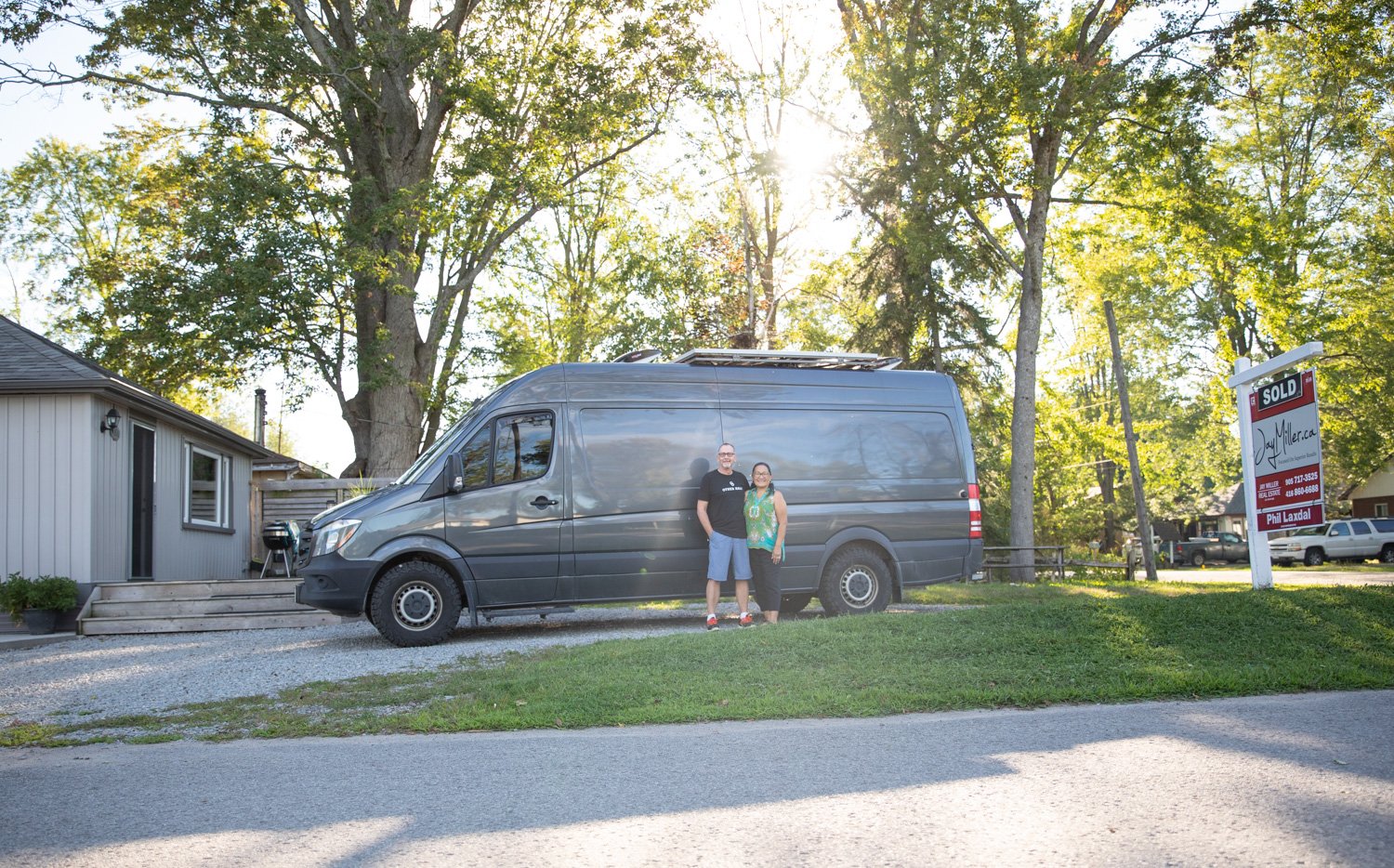 Who they are: Jamie Forret, a 59-year-old letter carrier for Canada Post, and Lisa Forret, a 58-year-old finance administrator (both are semi-retired)

Jamie: “We met at McDonald’s in Scarborough in April 1978. I was flipping burgers, and Lisa worked at the service counter. We started dating that year in December and got married in 1982. In 1990, we had twin boys, Addison and Dillon. We were living at Queen and Broadview at the time, but we wanted to raise the boys in a quiet, rural area and so we moved to Sharon, Ontario.

“We love music in this family. It’s a common bond. The twins were in several bands together growing up, and we’ve been in every dive bar in Toronto that they’ve played, sticky floors and all. We’ve always been the roadie parents. We would take the boys on road trips when they were growing up, and as they got older, we’d take them to see bands that they liked in Philadelphia and Florida. We even flew down to Atlanta to see Dillon audition for a band he wanted to play with. Around 2013, after the boys moved out, we downsized to a 900-square-foot bungalow by the lake in Gilford, Ontario. 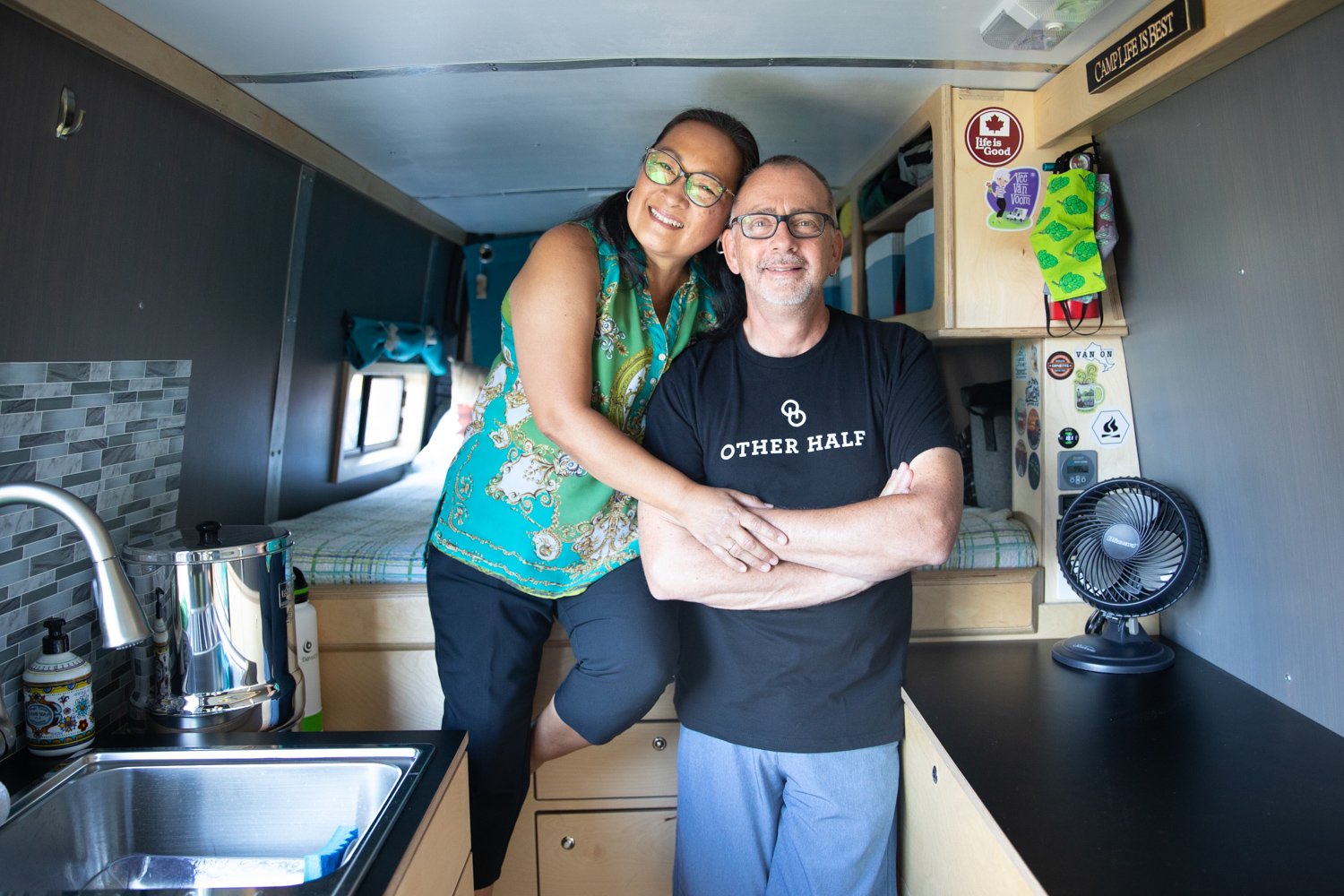 “In 2016, I went on tour with Dillon and his band as part of the Vans Warped Tour. I drove the truck, the band and all the equipment. We travelled 30,000 kilometres in nine weeks—they played 60 shows in 47 states. I lived out of a suitcase and thought, Well, this is easy. It made me realize how little I needed to function. I didn’t miss anything at the house; I only missed Lisa and Addison. We would do a daily FaceTime when Dillon’s band played their set.

“I would drive all night to the next show while the band was sleeping. Then I would sleep in the daytime and watch them play their set. Sometimes Dillon would get up and sit in the cab with me while I was driving, just so we could watch the sunrise together. That was my favourite time of day.

“During the tour, we wanted to make the most of being in cities on our days off. We would visit the local coffee shops and breweries. And when we were in closer cities, like Chicago and Detroit, Lisa would come visit with Addison and his girlfriend. 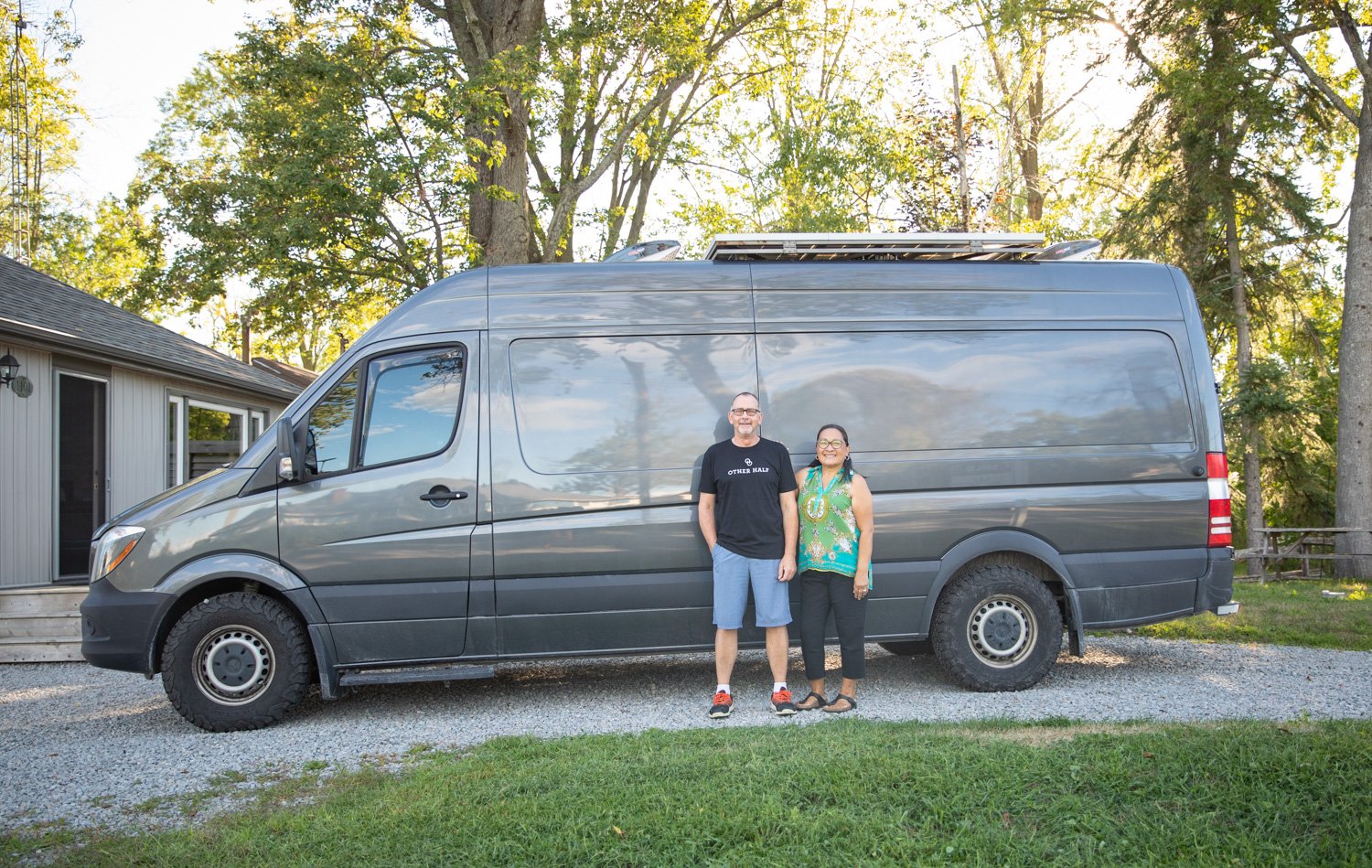 “I realized how much fun it was being on the road and seeing a different city every day. When I got back, I was overwhelmed by the size of the house and all the stuff in it. Once, I went into the garage and I couldn’t believe all this stuff we had hoarded. I didn’t even know what was in the boxes, and we kept moving them from house to house. I couldn’t understand why we needed all of it.

“I became obsessed with tiny homes and small-space living. On a trip to Napa in June 2017 for the Bottlerock Music Festival, we rented a camper van. We went to the festival, slept in the van and then drove to the Pacific Coast afterwards and thoroughly enjoyed it.

“And so in 2018, we decided to buy a van. We named it Gertie and took 18 months to upfit. We had ideas for what we wanted, and we found independent contractors to help us. We have a sink, fridge, toilet and space in the back to store our bikes. We made sure the electrical system we had installed could support our needs because Lisa enjoys baking bread in our Breville oven and also cooks with the InstantPot and an induction cooktop. At a van meet-up in San Diego with over 300 vans, Lisa made brownies for everyone. 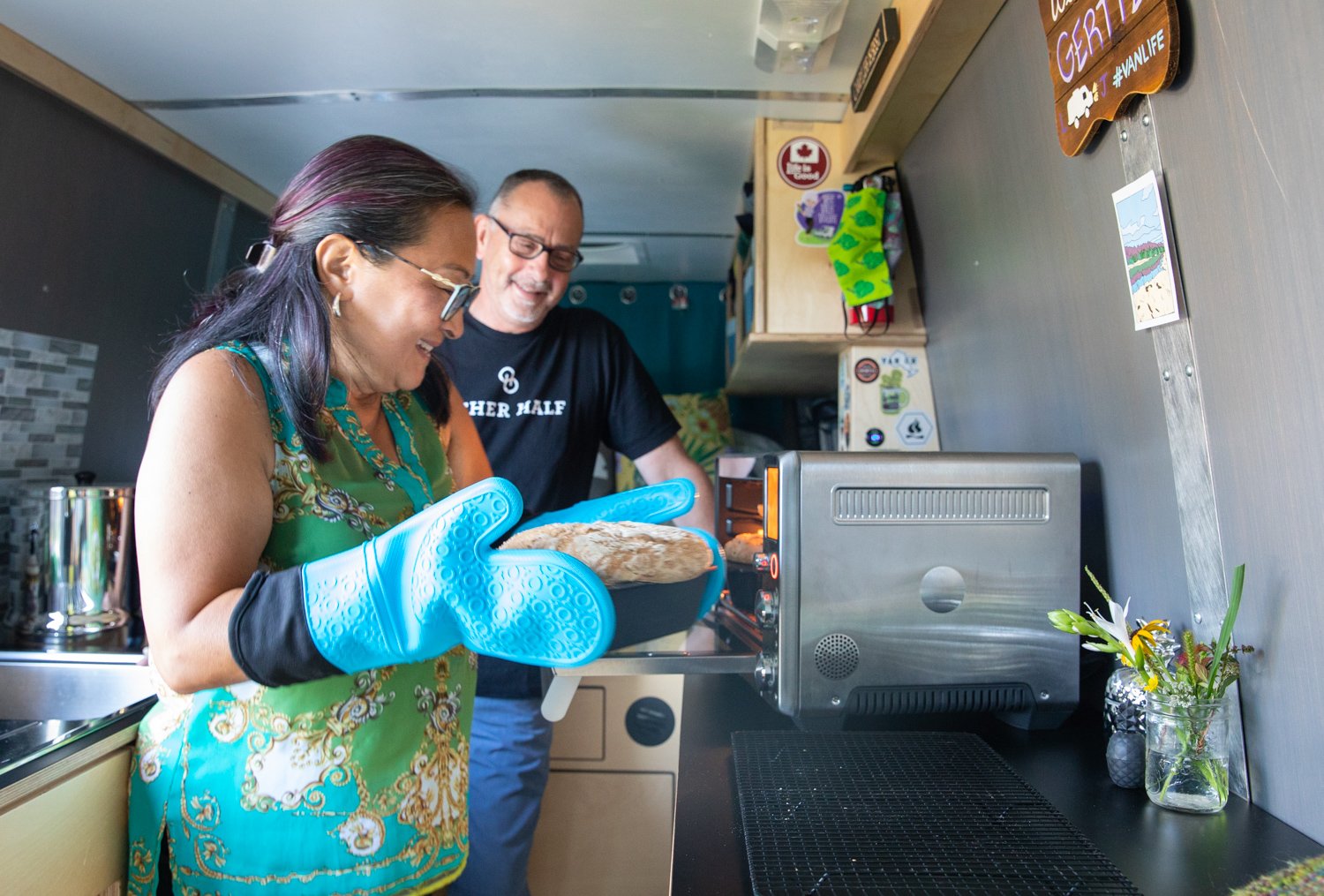 “Last December, we took our first big trip across North America in the van. We headed west to British Columbia and then down the coast to California, through Texas, and all the way back up the east coast to New York before coming back home in February. The views were spectacular. Our favourite experience was winter camping in Banff. It was -20 degrees out, but we were warm and toasty in the van. It was breathtaking. I’d only seen glimpses of the Rockies when I drove through them in 2016 for the Warped Tour. This time, I got to enjoy them.

“We’d been toying with selling our house for a few years, especially now that the boys—who live in the city—are grown. At one point, we offered our sons the house but they said they weren’t done living in Toronto. We were raised old-school and were taught to always leave something for your children. Meanwhile, the boys said, ‘We don’t want anything. Can you just go enjoy yourselves?’ 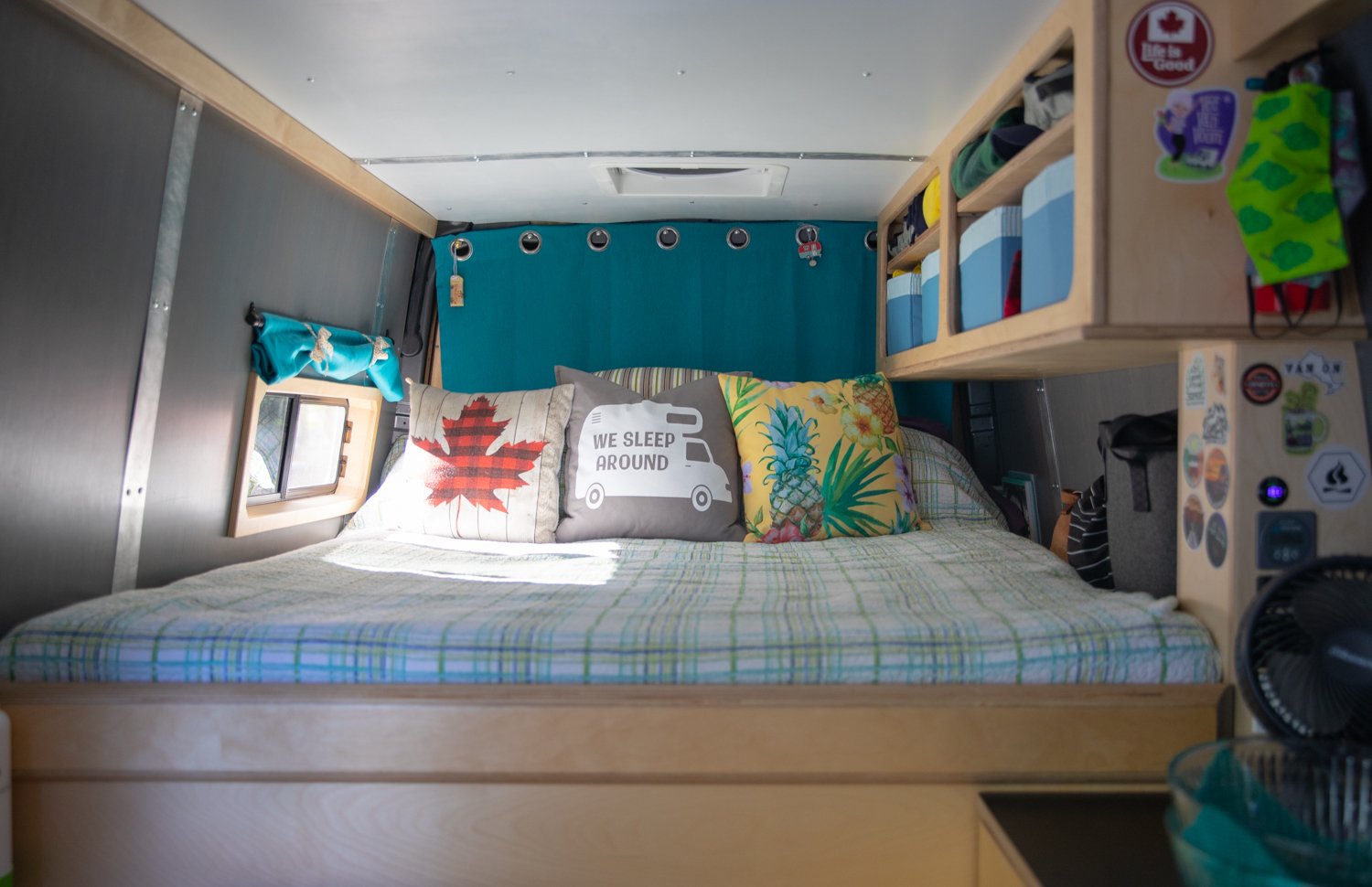 “We tried to sell our home last year but the market was flat in our area. Then, when the pandemic hit, the real estate prices in our area shot up at least 10 per cent. The market is good because people are trying to get out of Toronto, and lots of people wanted a cottage-like home by a lake like ours. We put the house on the market on July 15, and 13 days later we had four offers. The one we took was about $51,000 over asking. When we accepted the offer, I thought, What did we just do?

“I went into panic mode after the sale. I was freaking out. But now we’re completely debt-free. We’ll be able to save some money and help the boys out if they need it, and we can get a few more things for the van. With my pension from Canada Post, we’ll be able to live comfortably without touching any of the money from the house. 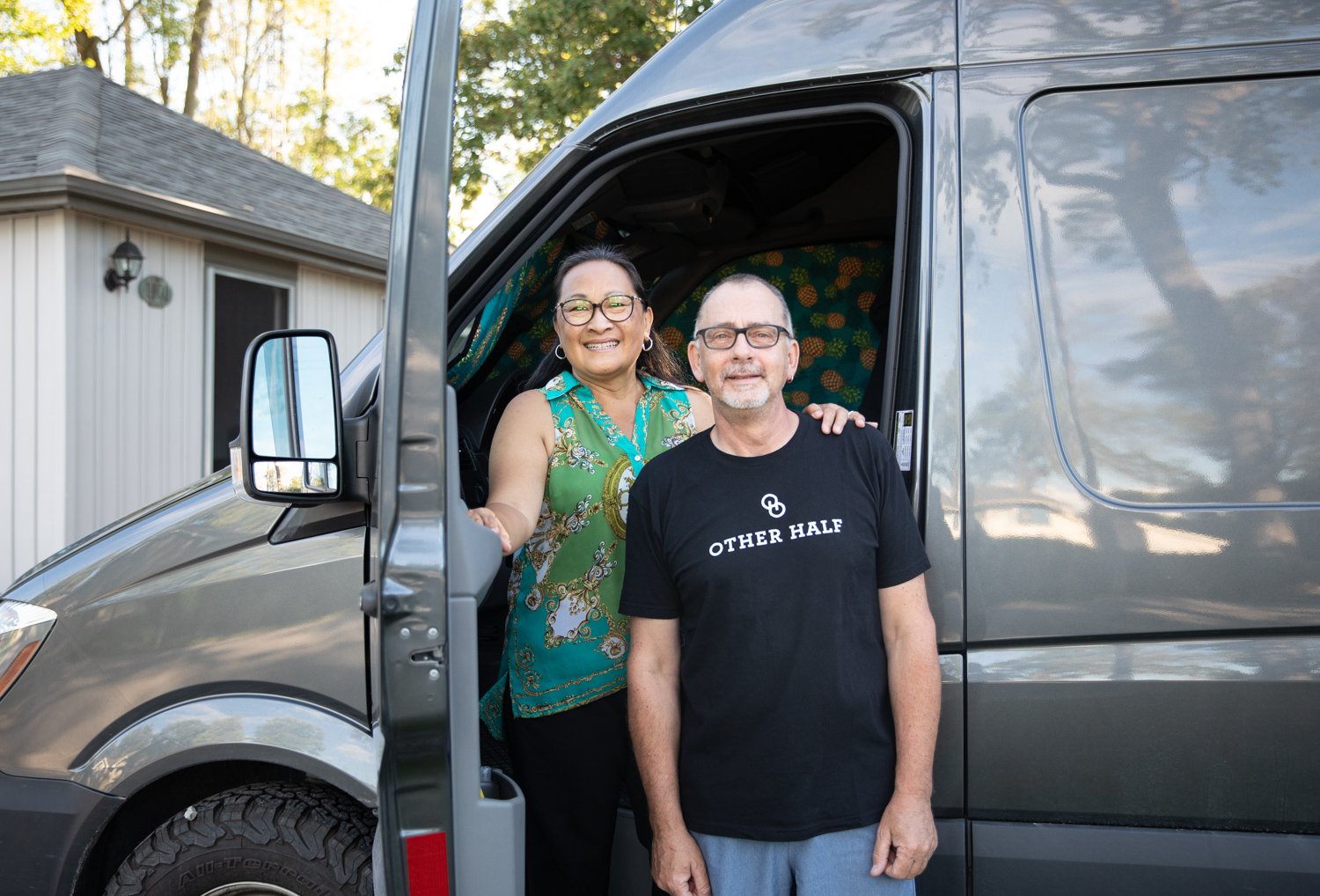 “We plan on travelling around Canada and seeing as many music festivals and craft breweries as possible. Our home sale closes on October 1, and then we’ll head west. My mom is in Mission, B.C., and Lisa has family out there as well. We have friends scattered across Canada, and we plan to see as many of them as we can. We plan to spend the coldest months, from January to March, in the Okanagan area where it’s not as cold. Our van is also insulated with sheep wool, which we chose because it’s all-natural product and won’t mould if it gets wet. If it does get too cold, we’ll rent an Airbnb.

“Even with Covid, we’re not putting anyone at risk because we’re so self-contained in our van. We do all of our food shopping before we leave so we don’t have to go out to grocery stores in the places we visit. 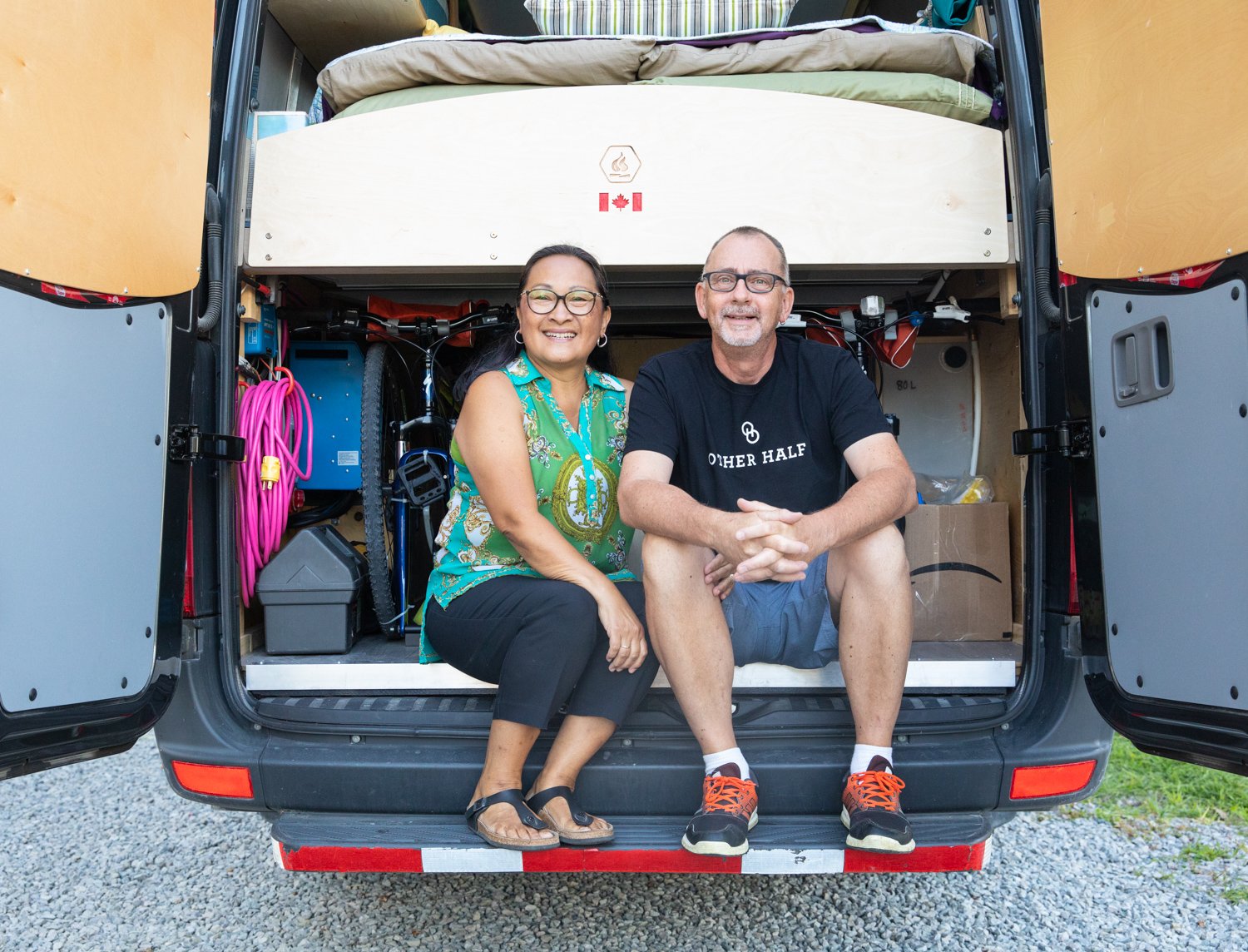 “If things start shutting down again, we’ll either come back to Ontario and stay in the van, or we’ll stay with family out west. We’ve used the showers at truck stops on our previous trips in Gertie, and hopefully those will still be open. One of our neighbours offered us their driveway if we ever need it.

“Our ultimate goal is to buy a small plot of land. We’re planning to build a shipping container home. We want two stacked 40- and 20-foot containers so we can have a patio and deck on the second level. Everything will be modular. New shipping containers could cost $5,000 to $6,000, and we can probably do the build for under $100,000. We’d put in a bedroom, dining area, kitchen, shower and composting toilet. We’ll also have a shipping container bunkie for guests. Once we close out on this house, we’ll be nomadic for four to five months to see the country and to look at land. We’d like to find it in Ontario, but we’re open to anywhere in Canada. When we find a piece of land that pulls at our heartstrings, we’ll build our home there.

“A shipping container home sounds strange to most people, but we’re drawn to the versatility and minimalism, and we don’t need that much space. We’re just looking for a place to come home to after our travels. With a shipping container home, if you get tired of your surroundings, you can put it on a transport truck and go to the next place you want to live.

“At first, our friends were confused when we said we were selling the house and moving into our van. But then they saw the photos that we posted on social media and started to understand why we did it. Ever since we began our nomadic transition, we’ve had a few friends who sold their properties and are travelling around in an RV, too.

“In the van life community, you’ll get a lot of friends who say, ‘I really want to do van life, but my spouse doesn’t want to do it.’ For it to work, both parties have to want to do it. You’re living in 100 square feet and you’re on top of each other all the time. Sometimes you’ll be stuck in the van when it’s raining and you have to figure out what to do. If you say, ‘It would drive me crazy to be in a small space with my husband,’ well, obviously, you need to think twice about taking this journey. I’m glad that after 42 years being together, Lisa and I still make each other laugh. We joke around a lot.”