A murder at Gibraltar Point Lighthouse, a battle at Yonge and Eglinton and seven other fascinating stories from Toronto’s long-forgotten past

A murder at Gibraltar Point Lighthouse, a battle at Yonge and Eglinton and seven other fascinating stories from Toronto’s long-forgotten past

In 2010, author and historian Adam Bunch created the Toronto Dreams Project: he wrote stories about forgotten figures from the city’s past, and then hid the notes in public places for people to discover. Now, he has collected many of those anecdotes in The Toronto Book of the Dead, a deeply researched book that documents how much of Toronto has been built on the backs of those who are now long gone—alongside accounts of the strange and sometimes gruesome ways these characters died. “People think the history of Toronto is boring and unimportant,” he says, “but the deaths recorded here are some of the most engaging moments in our story.” Here, some of the book’s most fascinating battles, murders and ghost stories.

Huron Feast of the Dead

Tabor Hill—a raised mound near Bellamy and Lawrence in Scarborough—is an ancient Wendat burial ground thought to have been created during a Feast of the Dead ceremony sometime between 1250 and 1300. The Wendat interred their dead in bulk coffins near the edge of their villages and, 10 or 15 years later, when they’d depleted the local resources, they would move villages. “Then they would have a reburial ceremony,” Bunch says, “where all their loved ones would finally be buried in a communal grave.” At least 20 other burial grounds of this sort have been discovered in Toronto, but these locations are kept private so as to better protect them. 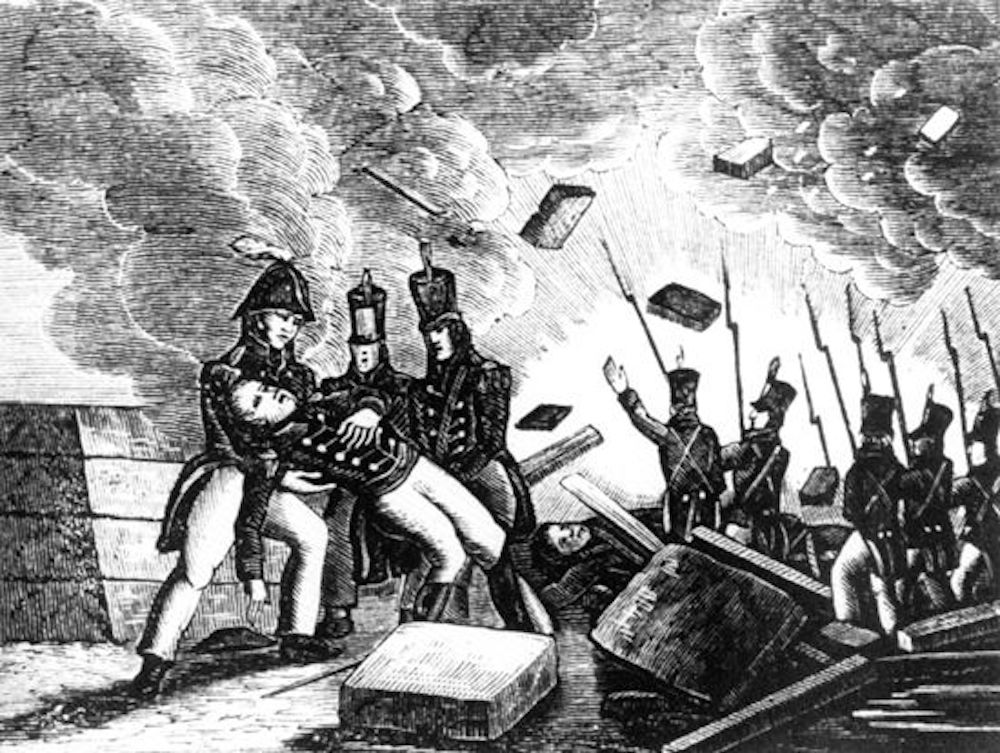 The Death of General Pike

By April 1813, York was the capital of Upper Canada, and the Americans decided to launch an invasion, entering the city through what is now Exhibition Place. The British commander leading the defence ordered his men to set fire to the grand magazine of Fort York, where all the gunpowder and weapons were stored, and the explosion killed the acclaimed American General Zebulon Pike, which cemented the divide between the two nations. “Previously, it was unclear how different Upper Canadians really were from Americans, since many of them had actually immigrated from the United States,” Bunch says. “But it’s hard to see each other as family and friends when you’re burning each other’s houses. This certainly led to more people feeling a sense of being Canadian.” 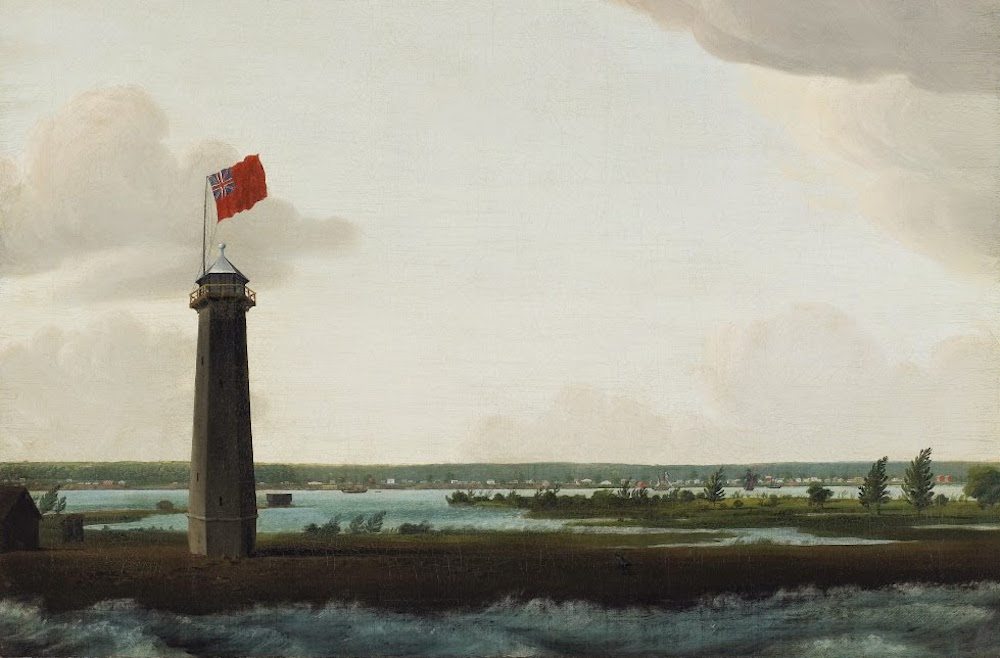 Toronto’s first lightkeeper, John Paul Radelmüller, was murdered at the Gibraltar Point Lighthouse on the Toronto Islands, one of the oldest buildings in Toronto. There are contradictory accounts of what happened, but the most common version is that Radelmüller brewed German-style beer at the lighthouse for the soldiers at Fort York and, one winter night in 1815, when he cut them off, they got upset and pushed him off the top of the lighthouse. “Scared of retribution, the soldiers chopped him up and tried to bury him in the frozen ground,” Bunch says. “Some people say on misty nights, you can hear him calling in the distance, or that you can see his figure wandering through the mist without arms, because they’d been hacked off.” 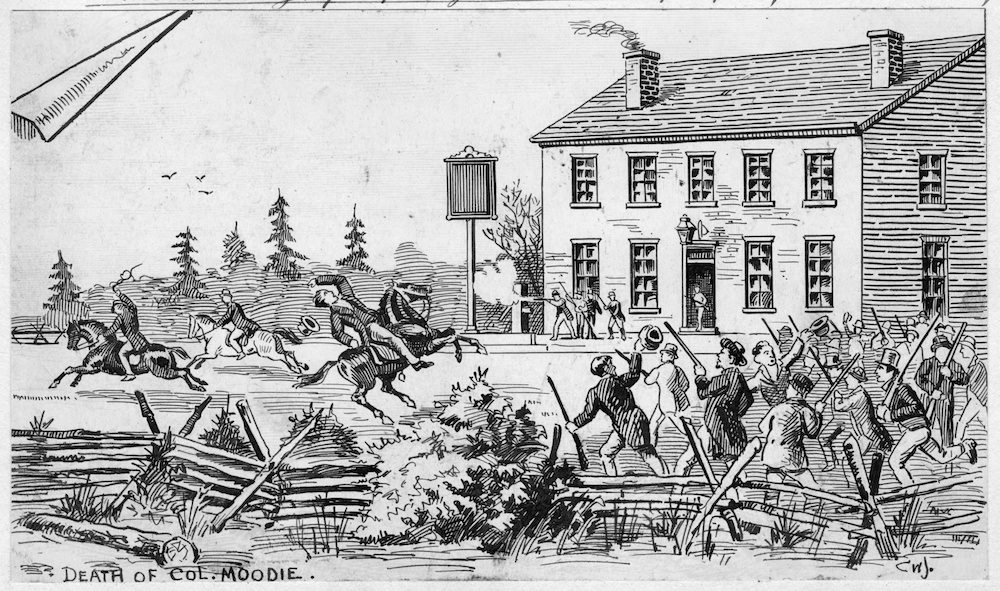 In 1837, Toronto’s rebel mayor William Lyon Mackenzie led a small army down Yonge Street in the name of independence from Britain. Colonel Robert Moodie, a war veteran and a loyalist who lived in Richmond Hill, took it upon himself to set off with his aides to warn the governor about the incoming rebels. “They made it to Montgomery’s Tavern, somewhere near what we now call Yonge and Eglinton, where the rebels were gathering and barricades had been set up,” Bunch says. “Moodie made it past the first barricade. At the second, he tried to fire a warning shot over the rebels’ heads to scare them off, but they fired back. He was the first person who got shot, and he bled to death at the tavern soon after.” 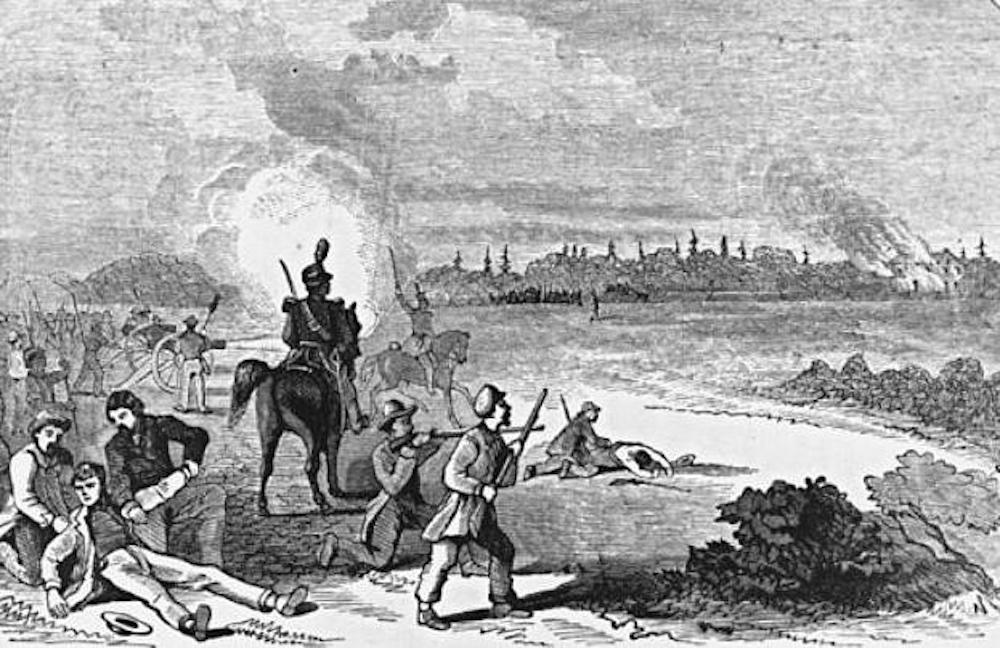 The day after Moodie’s death, Mackenzie’s army marched south to modern-day College Street and fought the government in a skirmish. Two days later, the British retaliated. The battle itself lasted just 15 minutes thanks to the Loyalists’ successful use of the cannon. 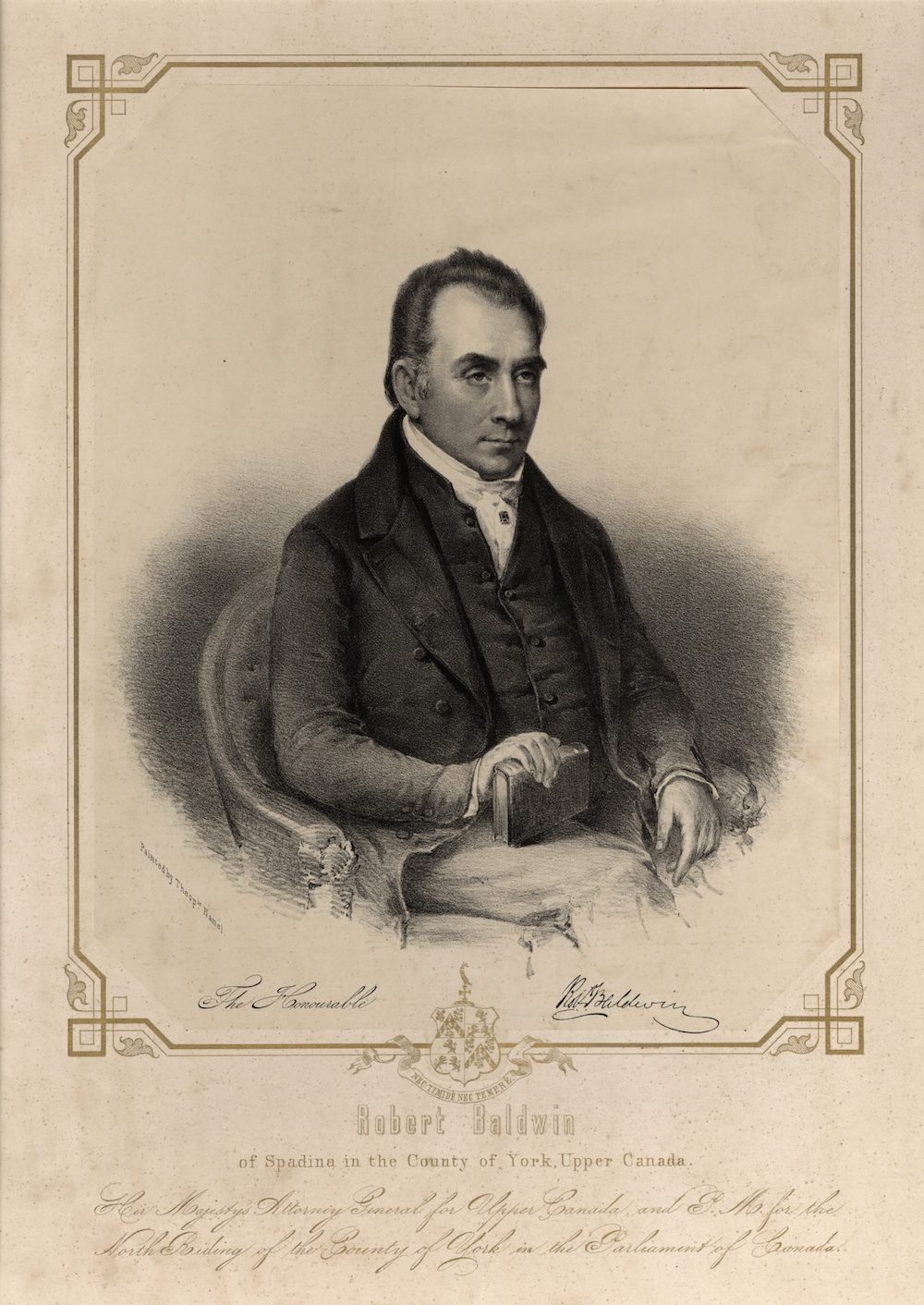 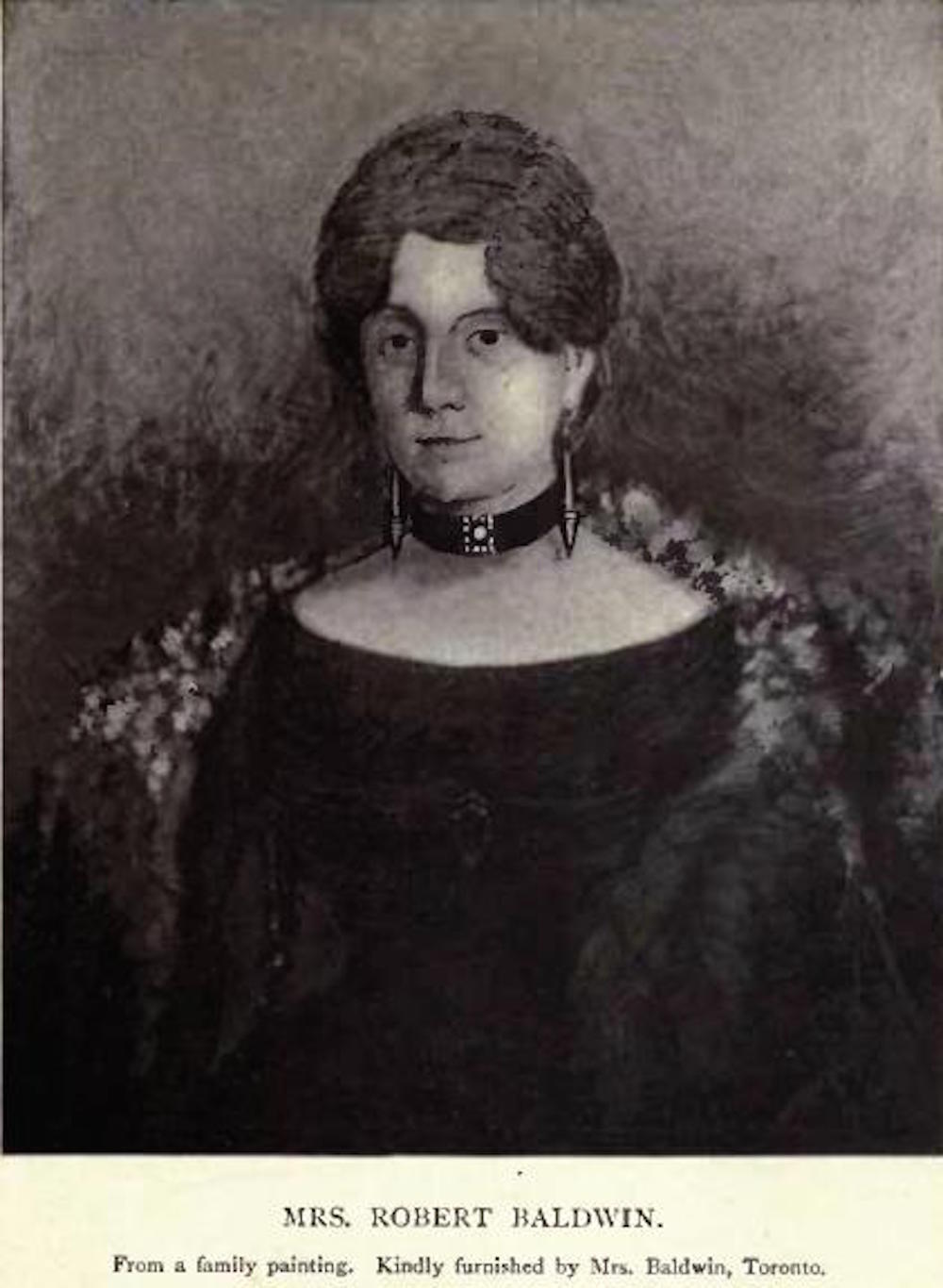 Robert Baldwin, a politician who championed Responsible Government, was deeply depressed. His family disapproved of his love for his cousin Augusta, but he married her nonetheless and was shattered by her death nine years later, in 1836; she was just 26 when an infection from a C-section took her life, though the baby survived. “He’d break down in tears in Parliament, he carried her letters in his pocket constantly, and he kept her room untouched as a shrine to her,” Bunch says. Twenty-two years after Augusta’s death, Robert died and was buried in his family tomb in Spadina House. “A few days later, in one his old jackets, they discovered his final instructions: he wanted to be buried with her locket, he wanted their coffins chained together, and he wanted to be given the same abdominal Cesarean section wound that took Augusta’s life.” His relatives dutifully reopened his coffin and saw to his wishes as specified. 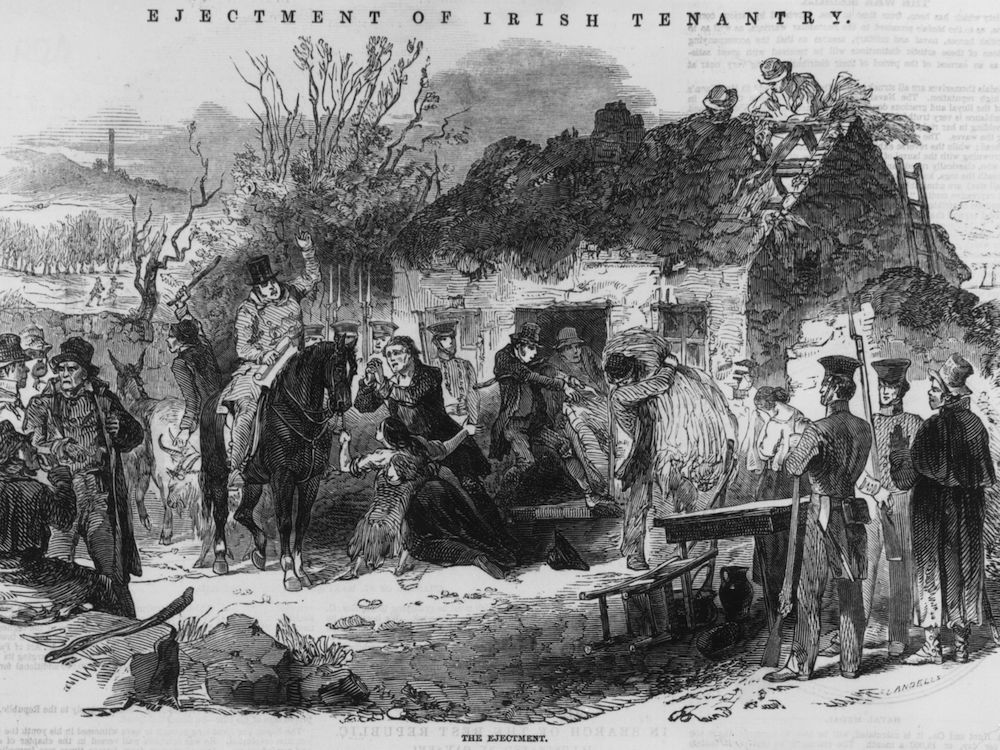 In the summer of 1848, the Great Famine was at its peak, and 38,000 Irish refugees flooded into Toronto, which had a population of only 20,000 at the time. Many of the Irish migrants succumbed to typhoid soon after their arrival, and anti-Irish racism started mounting. British landowners evicted many of their Irish tenants, and ill people were sent to “fever sheds,” which were set up near King and John. “If you were well, you were not allowed to settle in Toronto,” Bunch says. “You were forced to keep travelling until you reached parts of the countryside like Hamilton or London.” Today, Ireland Park, at the foot of Bathurst, serves as a monument to the lives lost.

Around the end of WWI, Louis Benjamin, a medium who lived on Euclid Avenue, said he was able to speak with the dead. “With the huge number of people dying, the occult became popular again,” Bunch says. “People liked the idea that they could talk to their father, brother, sister or friend who they thought was gone forever.” A.D. Watson, a well respected doctor, published a book, The Twentieth Plane, backing Benjamin’s claims, which caused an international furor. Lucy Maud Montgomery bought the book and reportedly called it “poppycock” in her diary, while Sir Arthur Conan Doyle came to Toronto to attend a séance with Benjamin and Watson in person. He apparently wrote about the experience in his own papers about the occult. 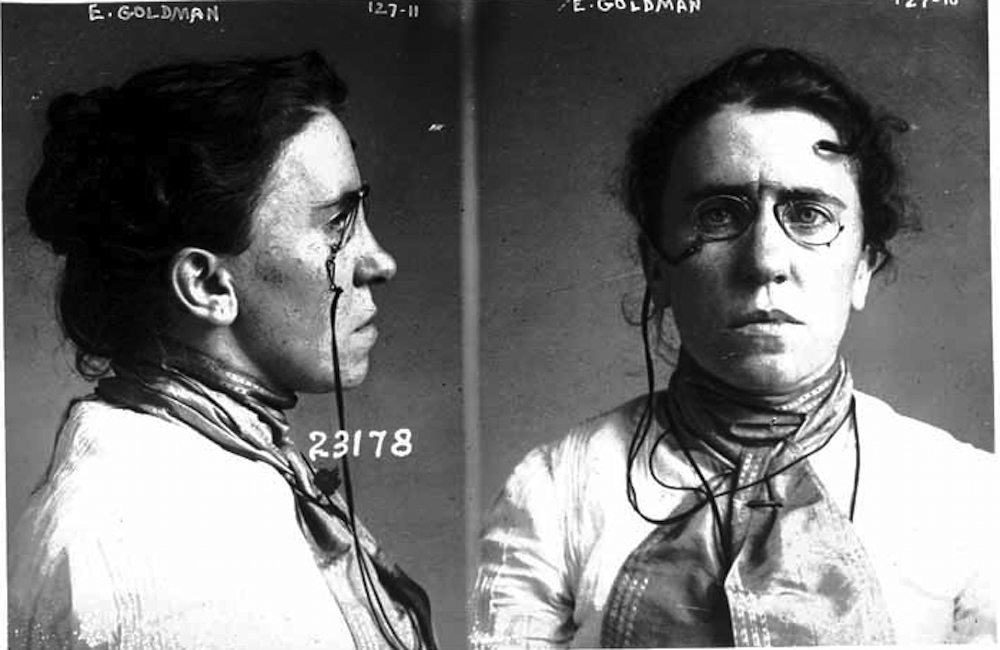 Emma Goldman was a notorious 20th-century anarchist: she gave illegal lectures about birth control, helped remove corporal punishment from schools, was arrested because President McKinley’s assassin said her speeches had inspired him. She was deported from the United States in the early 1900s. “They say she carried a book with her wherever she went, because she knew she could be arrested at any moment and she’d want something to read,” Bunch says. She spent her final days living in Toronto, where she won one last battle: saving the life of a local anarchist leader Attilio Bortolotti. He had been arrested on dubious charges and slated to be extradited to Italy, where Mussolini’s government would likely kill him, but Goldman’s speeches and media savvy pressured the government into letting him remain in Canada. A pair of strokes eventually took Goldman’s life during WWII.