Takeaway Tales: Is Kinton Ramen as good at home as in the restaurant?

Takeaway Tales: Is Kinton Ramen as good at home as in the restaurant?

Thanks to a flood of food delivery apps, it’s now easier than ever for the hungry and housebound to order just about any dish from just about any restaurant. But just because you can order something, should you? We’re taste-testing some of the most popular cravings in town to see how the entrees hold up, and if the at-home version compares to the experience of dining out. Along the way, we’re test-driving the apps that bring the dishes to your door. (Or, in this one case, prep for you to pick up.) 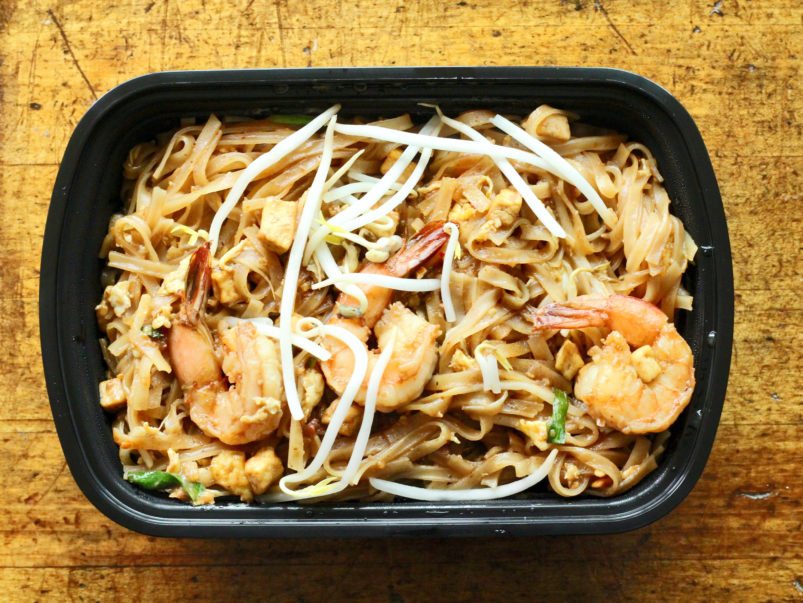 Takeaway Tales: Is Sukhothai’s shrimp pad Thai as good at home as in the restaurant? 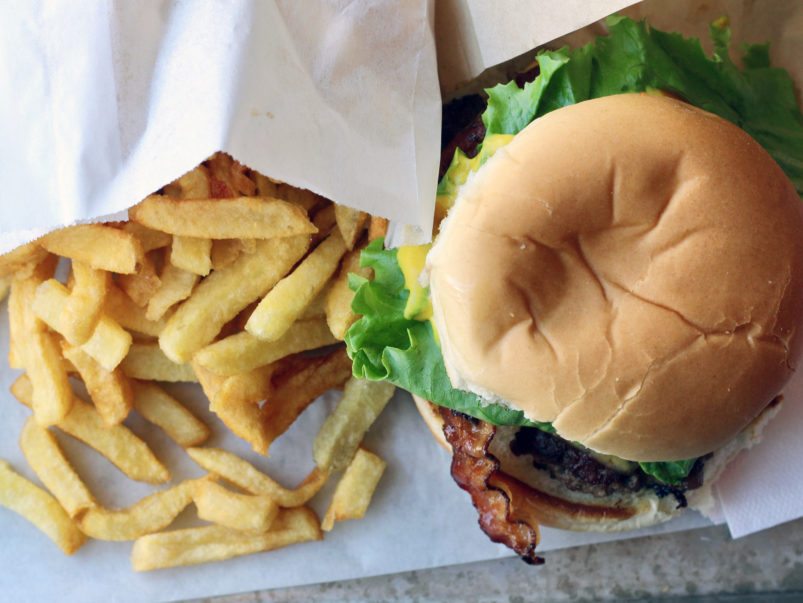 Takeaway Tales: Is the Burger’s Priest’s bacon double cheeseburger as good at home as in the restaurant?

What were we in the mood for?
A bowl of the original ramen from Kinton Ramen: noodles, pork and egg resting in an indulgent pork, chicken and fish broth that’s so fatty it’s almost spreadable.

What’s the food like at the restaurant?
A shimmer of fat skims the surface of the burning-hot broth. The pork—a wide slice of fatty belly and a thin slice of shoulder—has sear marks from a blowtorch used to finish the meat before serving. Nori pokes out of the soup, half soggy and half crisp. Underneath sit thick, springy noodles. It’s finished with an egg, its yolk creamy but not so loose that it leaks.

Sold. Now, how was the app’s selection and ordering process?
Ritual, which does not deliver, allows users to browse menus, place orders and have food ready for pick-up on arrival, circumventing the time-suck of searching restaurant websites, calling, interacting with staff, waiting for orders to be cooked, waiting in line or paying. Tipping is handled through the app. (Ritual also has a “piggyback” function that notifies users when people in their office are ordering, allowing them to take advantage of group pick-up.) It’s not quite as visual as UberEATS, but there’s a large selection of restaurants to choose from, and customizations are easy—extra pork $3, extra thick noodles $1.90, corn $1. I am also awarded points: 500 as a welcome bonus; 110 for my ramen and another 100 for it being my first order from Kinton. In addition to my 710 points, I’m apparently two-thirds of the way to Elite status. It’s unclear if I can use these points to fly somewhere warm, or contribute to my RRSP. 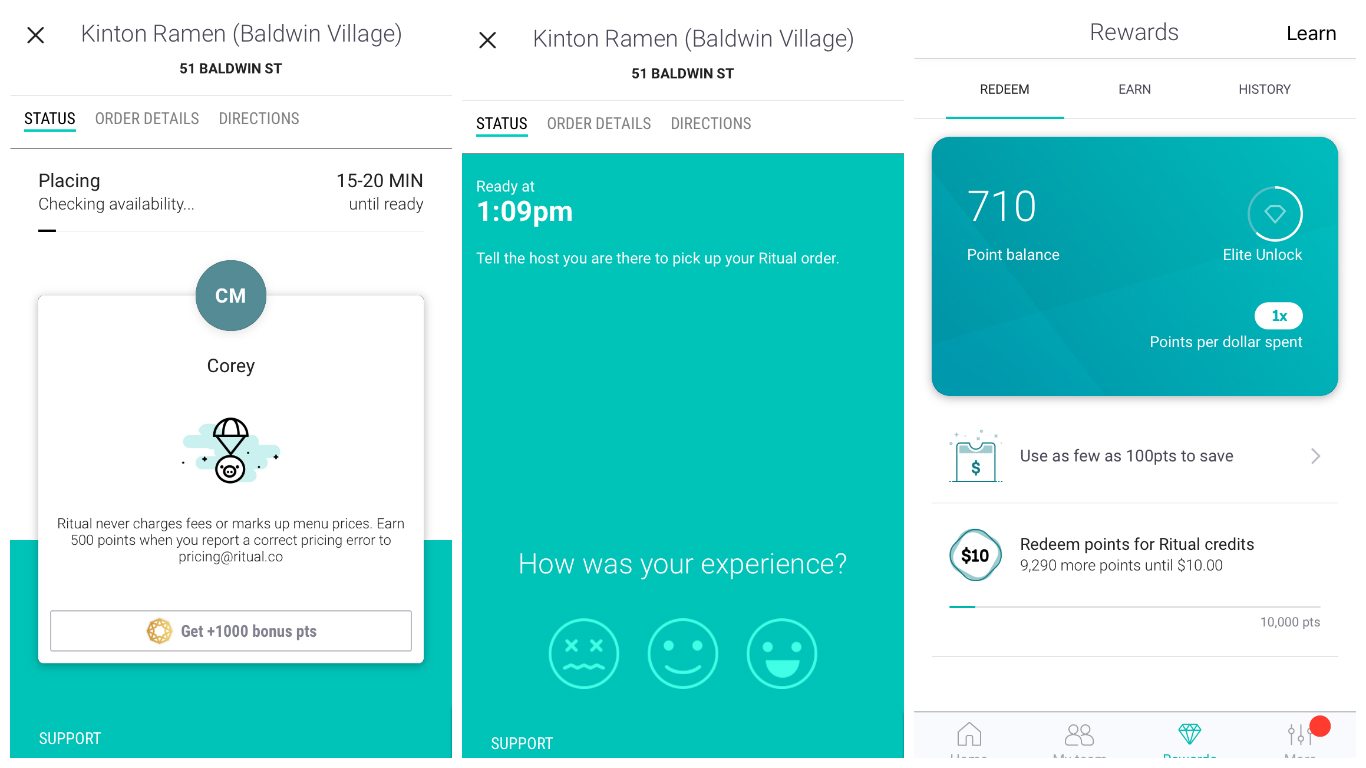 How long does  prep take?
My ramen was promised to be ready in 15-20 minutes; exactly 15 minutes later, during a busy lunch rush, the app informed me that my food was available for pick-up. It was waiting on the counter when I arrived. A server checked my name to make sure my order didn’t get mixed up with someone else’s.

So, how does the delivery version of the food compare?
In the restaurant, boiling hot soup is poured over the freshly cooked noodles, reanimating the braised pork and egg. For take-home purposes, because the whole thing would get soggy otherwise, the broth is packaged separately from the other ingredients. During the six-minute walk home, the noodles formed into a puck. Pouring the broth over them, it took the noodles another five minutes to untangle, by which time the hot soup lost its oopmh. The pork was warm enough but the egg was cold in the centre, which was also solidified, unlike the gooey version in the restaurant.

How much did it cost?
$14.90, with tax and tip—the same as it cost to eat in. Ritual doesn’t charge any extra fees to the customer.

The takeaway: is it worth ordering to eat at home or at work?
I can’t find fault with the Ritual service. The brisk, restorative walk felt better than the extra 15 minutes of productivity (which I would have spent hunched over my desk) that I could have wrangled out of having it delivered. Ramen, however, is just not ideal take-out or delivery food. In Japan, there’s a ramen shop on every corner. While the trend isn’t as ubiquitous here, the service at Kinton and other Toronto ramen shops often matches Japanese speed, making the meal so satisfying and efficient, that the convenience of eating at home does not feel worth the sacrifice in quality.

Kinton Ramen is available through Ritual, UberEats and Foodora.