Like many of us, chef Ben Heaton is confined to his home. We asked the social-distancing chef to whip us up a meal with ingredients he already had on hand. His recipe: a classic club sandwich, made with chicken grilled on his Big Green Egg. 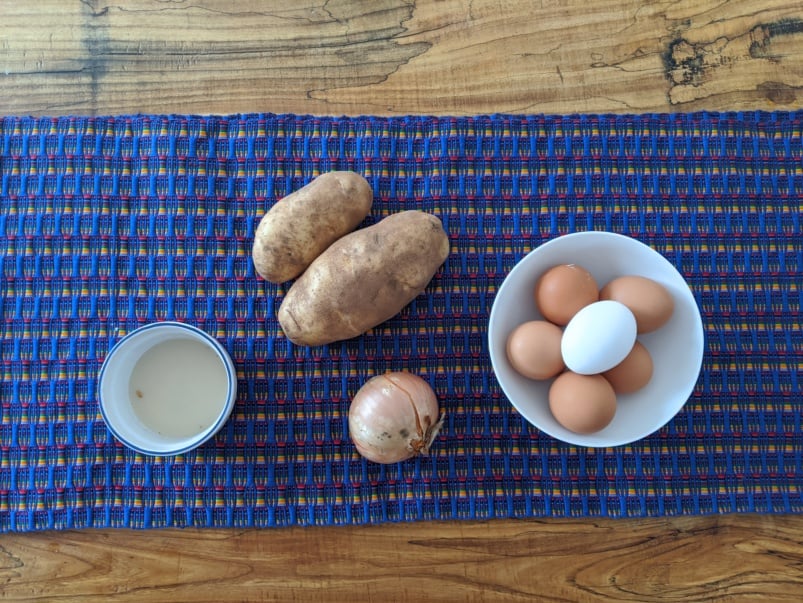 Pre-pandemic, Iconink’s corporate executive chef Ben Heaton spent his days (and nights) bouncing between Patria, Mira, Byblos, Figo and Weslodge. “The one positive thing to come out of all of this is that I get to spend time with my family,” says Heaton, who’s been cooking at home with his wife, Emily, and their two-year-old daughter, Olivia.

“During times like this, people don’t want to eat high-end French stuff—they want things like a club sandwich: simple, good, comforting food,” says Heaton. “And it’s always a good time for a club sandwich. I don’t think I’ve ever heard someone turn down a club—it’s a sandwich that puts a smile on your face.” Here’s how Heaton makes his zesty club sandwich.

The day before Heaton wants to make his club sandwich, he’ll marinate the chicken by salting the meat and rubbing it with some crushed canned chipotle (reserving about a teaspoon of chipotle to make the zesty mayo).

The next day, he’ll let the chicken come to room temperature before throwing it on the grill. Heaton has been all about barbecuing lately. “It gets me out of the house,” he says. “When you’re used to being cooped up in a restaurant, being outdoors is nice.” Although Heaton loves the flavour from his Big Green Egg, he says that if you don’t have an outdoor grill, you can sear your bird on the stovetop and finish it in the oven at 350°F.

Heaton says the secret to a tender chicken breast is cooking it low and slow until it reaches an internal temperature of 150°F. The chicken will continue cooking once you take it off the heat. Don’t rush the process—cooking this lean cut at too high a temperature will result in tough skin that will—according to Heaton—taste like chewing a puck of compressed wood.

While the meat is grilling, cook your bacon in the oven on a low broil, turning each strip a couple of times to ensure both sides get crispy. Heaton’s cooking with Seed to Sausage stuff here (it’s his favourite bacon brand), but he says any sliced bacon will work. Don’t use thick-cut bacon, though, as it won’t reach a satisfactory level of crispiness.

Heaton whips up a chipotle mayo by mixing a teaspoon of that reserved canned chipotle with a squeeze of lime juice, three tablespoons of mayo and a pinch of salt. If you’re a chili head, add more chipotle to crank up the heat.

Once the chicken is done (about 15 to 20 minutes depending on thickness), it’s time to throw the bread on the ’cue. “Grilled bread is one of the world’s greatest things, when it’s done right,” says Heaton, before noting that people don’t realize bread needs to be seasoned just like any other ingredient in a recipe. He brushes olive oil onto both sides of each bread slice and dusts them with salt and pepper before throwing them on the grill. (You can also use a frying pan for this step.) Once they’re lightly charred and golden brown, it’s time to assemble the stack.

Slather some of that chipotle mayo onto the bread and then pile on the bacon, chicken, lettuce and tomatoes.

Watch out, Ben, Olivia has her eyes on the prize.