Pawel Grezlikowski knows the precise window for frying a piece of chicken: between six minutes and 15 seconds, and six minutes and 45 seconds. The sign above his 192-square-foot Little Italy chicken shop simply reads “FRIED CHICKEN SANDWICHES,” and few diners know the proper name is P.G Clucks.

Fewer know what goes into the sandwich, that Grezlikowski buys whole chicken legs, deboning each in under a minute. That the leg meat is brined, then soaked in buttermilk and dipped in seasoned flour twice before frying. (The second dip, at the last minute, is what prevents the crispy shell from sliding off like a cheap onion ring.) That Grezlikowski ferments chilies for his own hot sauce, adding a bit of xanthan gum for an emulsified gloss. That the buns are custom-made for size and density. That ordering your sandwich spicy doesn’t just mean extra hot sauce, but a dip of the chicken in a house-made oil infused with cayenne, garlic, onion and brown sugar.

For $7, no one would expect that amount of labour. “Because of the small store and low overhead,” says Grezlikowski, who makes about 250 sandwiches a day, “I can keep my food cost low and sell this sandwich with a pop for under $10. I couldn’t do that with burgers.”

Chicken is cheaper than beef. Even ground beef. And that’s the simplest explanation for why the fried chicken sandwich has become the new burger. 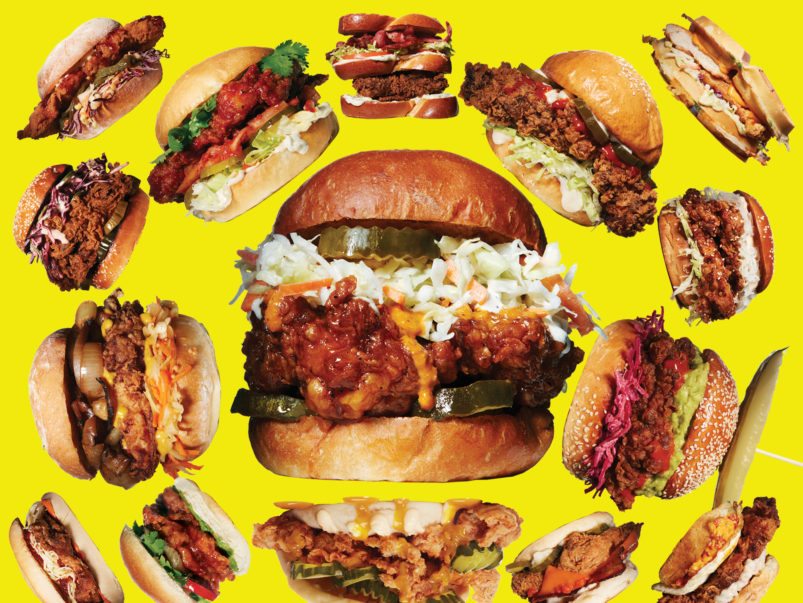 In the aftermath of the 2008 recession, a new fancy burger shop opened every week in Toronto. Shant Mardirosian emerged as the winner: his Burger’s Priest chain went national, with everyone else copying his four-ounce smash-griddled burger style. But since then, beef has gotten expensive. According to Statistics Canada, the price of ground beef and bacon has gone up 32 per cent since 2013. Even the non-prime cuts—the collections of chuck, neck, brisket, fat or other trimmings that might go into ground beef—have skyrocketed.

Chicken, meanwhile, has inched up a mere 2.4 per cent.

It’s no coincidence that so many seasoned restaurateurs have since gotten into the chicken game: Cory Vitiello (formerly of the Harbord Room) with Flock Rotisserie; Yannick Bigourdan (Nota Bene, Carbon Bar) with Union Chicken; Craig Wong (Patois) with Jackpot Chicken Rice; and David Adjey (of Restaurant Makeover) with the Chickery.

But chicken, with all due respect, does not have the same allure as some of its beefier, porkier protein counterparts. Not unless you fry it.

That’s how, over the past few years, fried chicken sandwiches have crept on to menus at the Gabardine, Bar Fancy, Electric Mud, Porchetta & Co., Indie Ale House, the County General, Rose and Sons, Cluck Clucks, Kitson and Co., Knuckle Sandwich, Kaboom, Beast, Pray Tell, LBS, the Federal, the Wren, and so on. Even Burger’s Priest now offers a fried chicken sandwich. They’re as ubiquitous in Toronto as delivery vehicles parked in bike lanes, and there’s an unending poultry-based arms race to slather them with sauces, slaws and cheeses.

But it wasn’t too long ago that they were strictly the domain of fast food restaurants.

Like vampires, these sandwiches have always lived among us. The popular U.S. chain Chick-fil-A has been around since the 1940s, and McDonald’s has offered its “McChicken” sandwich in some form since the 1980s. Even before the recession, foods of the American south were becoming fashionable: smoked brisket, corn grits and collard greens, all kicking the sawdust off their boots to join the rarefied upper echelons of dining. In 2009, restaurateur David Chang made fried chicken chic, serving it on family-style platters in one of his Momofuku restaurants. By 2015, Chang had distilled the fried chicken delivery mechanism into a sandwich business, Fuku. The following year, hamburger juggernaut Shake Shack introduced their own “Chick’n Shack” sandwich.

Kensington Market butcher Peter Sanagan had been operating a retail business since 2009, but hadn’t noticed a surge in chicken’s popularity until he began supplying restaurants. “I started wholesale in 2014. It was around then that I started seeing the spike in chicken thigh purchases,” says Sanagan. “Boneless chicken thigh was, by far, our number one seller in terms of volume. It was crazy.”

Based on his wholesale prices of $3 to $3.50 a pound, Sanagan estimates a cost of 80 cents for a chicken thigh. “And then you put in the labour. If you’re doing a buttermilk soak, and the batter and bun and everything. You can still get away with a decently-costed item, under $2.”

Burger meat, he estimates, wholesales between $5 to $8 per pound.

“Ground beef is more expensive now, per pound, than boneless chicken meat,” Sanagan says. “You’re putting the same bun and toppings and stuff, but you’re adding to your food costs, just based on that protein.” He adds: “You can only sell a burger for so much money.”

But just because the meat is cheaper doesn’t mean you can’t mark up a fried chicken sandwich. At the Gabardine, a proper restaurant in the stratospherically high-rent Bay Street district, the twice-fried battered chicken thigh with a sesame-gochujang sauce, iceberg lettuce and a sweetened mayo on a sesame egg bun from Jules Café Patisserie runs $20.

“One of the main reasons we put it on our menu was because it is cost effective and is a guaranteed local Ontario product,” says Kate Rodrigues, owner of the Gabardine. “Beef will sometimes come from P.E.I. or Alberta. Another reason is that chicken offsets the cost of beef so we can keep our burger at an affordable price.” (Despite the higher cost of beef, the Gabardine’s burger is just $21.)

At P.G Clucks, the chicken (which includes the thigh and leg) weighs between six and eight ounces, with the food costs ranging from about $1.50 to $1.75 a piece. And yet the sandwich is among the cheapest in Toronto.

Sanagan, however, doesn’t believe the relatively cheaper price is the only reason for the trend.

“I think people like fried chicken. And putting it in a sandwich makes it that much easier to consume.”