The Hockey Hall of Fame in downtown Toronto overflows with historic sticks, masks and jerseys, but some of the most fascinating items in its collection are a half-hour drive away. Etobicoke’s MasterCard Centre for Hockey Excellence is home to the Hall of Fame’s sprawling, climate-controlled archive of 3 million print photos, digital images, negatives, glass slides and videos of the good old hockey game. 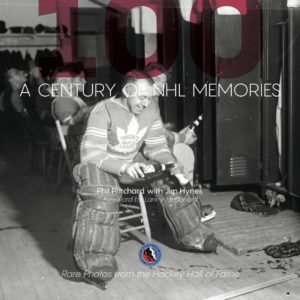 For the NHL’s 100th anniversary, the Hall of Fame asked Stanley Cup keeper Phil Pritchard and hockey writer Jim Hynes to help package some of the archives’ best photos into a coffee table book called A Century of NHL Memories. For Hynes, a Montreal native now based in Ithaca, New York, it was a tough job to whittle the collection down to just 130 photos and uncover the stories behind the never-before-seen shots. He wanted to represent every era, team and star of the sport, rather than stick to hockey’s most famous moments. “In hockey books, people tend to publish the same 20 great photos over and over again—you know, Bobby Orr flying through the air,” he says. We asked Hynes to tell us about five of the book’s best shots of the Maple Leafs.

Port Elgin • 1928
Toronto’s hockey team—previously known as the Arenas and St. Patricks—became the Maple Leafs in 1927. When the newly named squad failed to make the playoffs in their first season, owner Conn Smythe hired an RCMP corporal (in black) to train the boys in Port Elgin, Ontario. The regimen included golf, tennis, softball, fishing, running and calisthenics.

Maple Leaf Gardens • 1948
A photographer perched behind the Leafs’ net snapped this shot just after goaltender Harry Lumley deflected the puck above the back boards. While researching the book, Hynes discovered photographers would often jump onto the ice to get shots in between plays. Oakville photographer Harold Barkley was the first to bring his own strobe lights to the arena, allowing him to capture dramatically lit colour photos. “But he was this poor guy hauling 10 suitcases of gear into the arena by himself,” Hynes says.

Maple Leaf Gardens • Early 1950s
Hynes often felt like a detective, trying to uncover the identities of certain players and learn the stories behind the shots. He’d write down their numbers, check old rosters and write to hockey historians. He loved this photo, but had no idea who the player was. “We were days away from captioning this photo ‘Mystery Leaf,'” he says. “But I sent it to some hockey writers, who sent it to [retired Leaf] Dave Keon and other people in the know.” Eventually, someone recognized the player as John McCormack, who played a few seasons with the Leafs in the early 1950s.

Maple Leaf Gardens • 1951
Bill Barilko is the central character in an infamous Leafs myth, famously retold in the Tragically Hip song “Fifty Mission Cap.” After scoring the Stanley Cup–winning goal in 1951, Barilko disappeared in a plane crash; the Leafs didn’t win another cup until 1962, the year his body was found. It’s a bit of a sore point for Hynes, a die-hard Habs fan, that Barilko’s story ends the book. “There’s a Leaf on the cover of this book and a Bruin on the cover my other book,” he says. “They’re the two teams I hate most in the world. But I sucked it up in the name of selling books.”

Maple Leaf Gardens • 1960
This unfortunately inverted skater is Gerry James, the rare athlete who played in both the NHL and CFL, as a forward for the Leafs and running back for the Blue Bombers and Roughriders. For reasons unrelated to his tumble, this was one of James’s final games in the NHL.