A laser spider, a pyramid made from 200,000 gummy bears and all the other gorgeous glowing attractions at the Toronto Light Festival

A laser spider, a pyramid made from 200,000 gummy bears and all the other gorgeous glowing attractions at the Toronto Light Festival

A little razzle dazzle is crucial to surviving winter in the city, and few things deliver dazzle like the Toronto Light Festival. Running until March 4, the exhibition will adorn the Distillery District with more than 25 light installations from both local and international artists. Here, some of the most mesmerizing pieces on display. 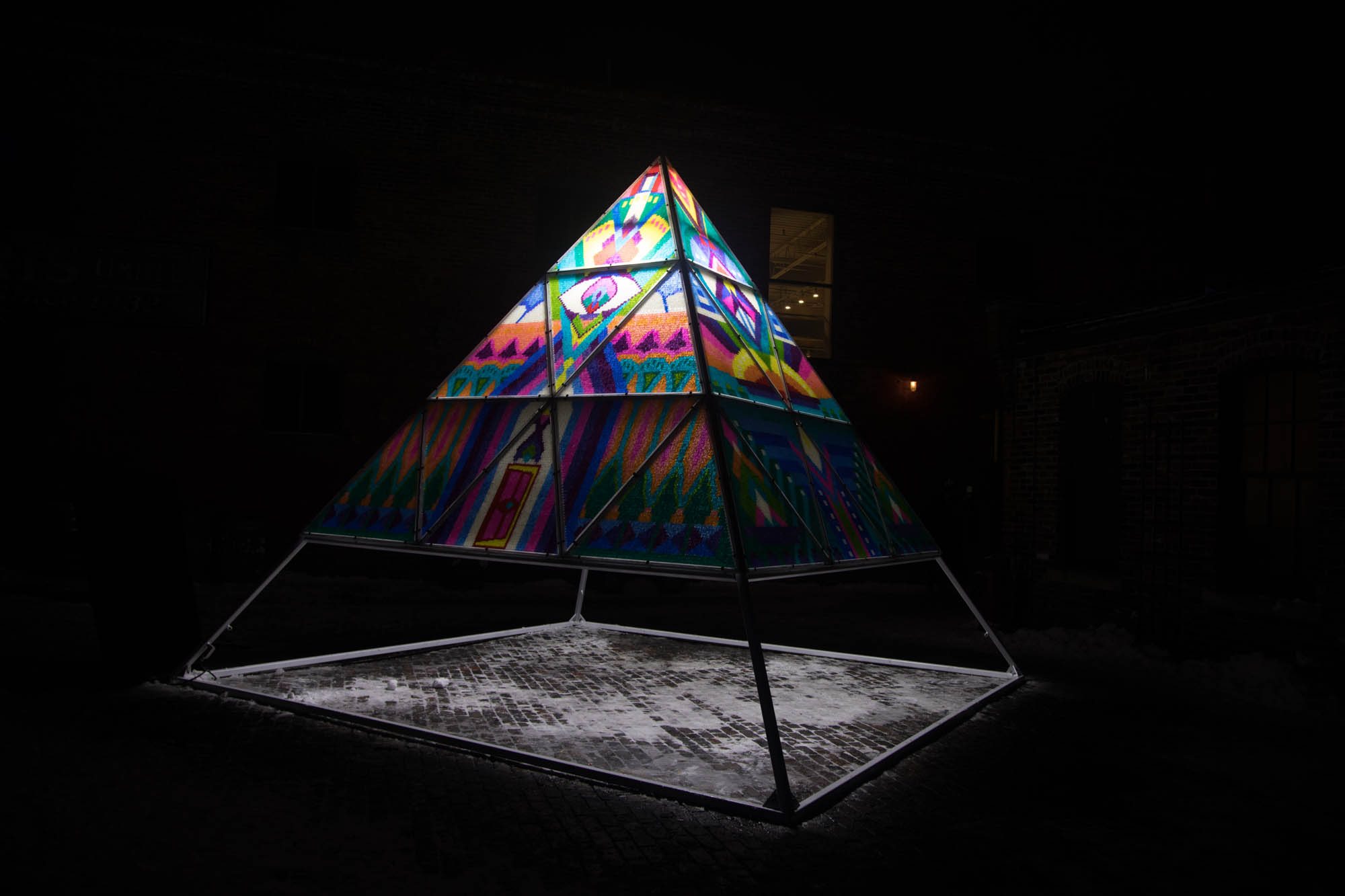 By Dicapria
This kaleidoscopic pyramid is comprised of a whopping 200,000 gummy bears. The artist created her own mold and produced the bears herself. 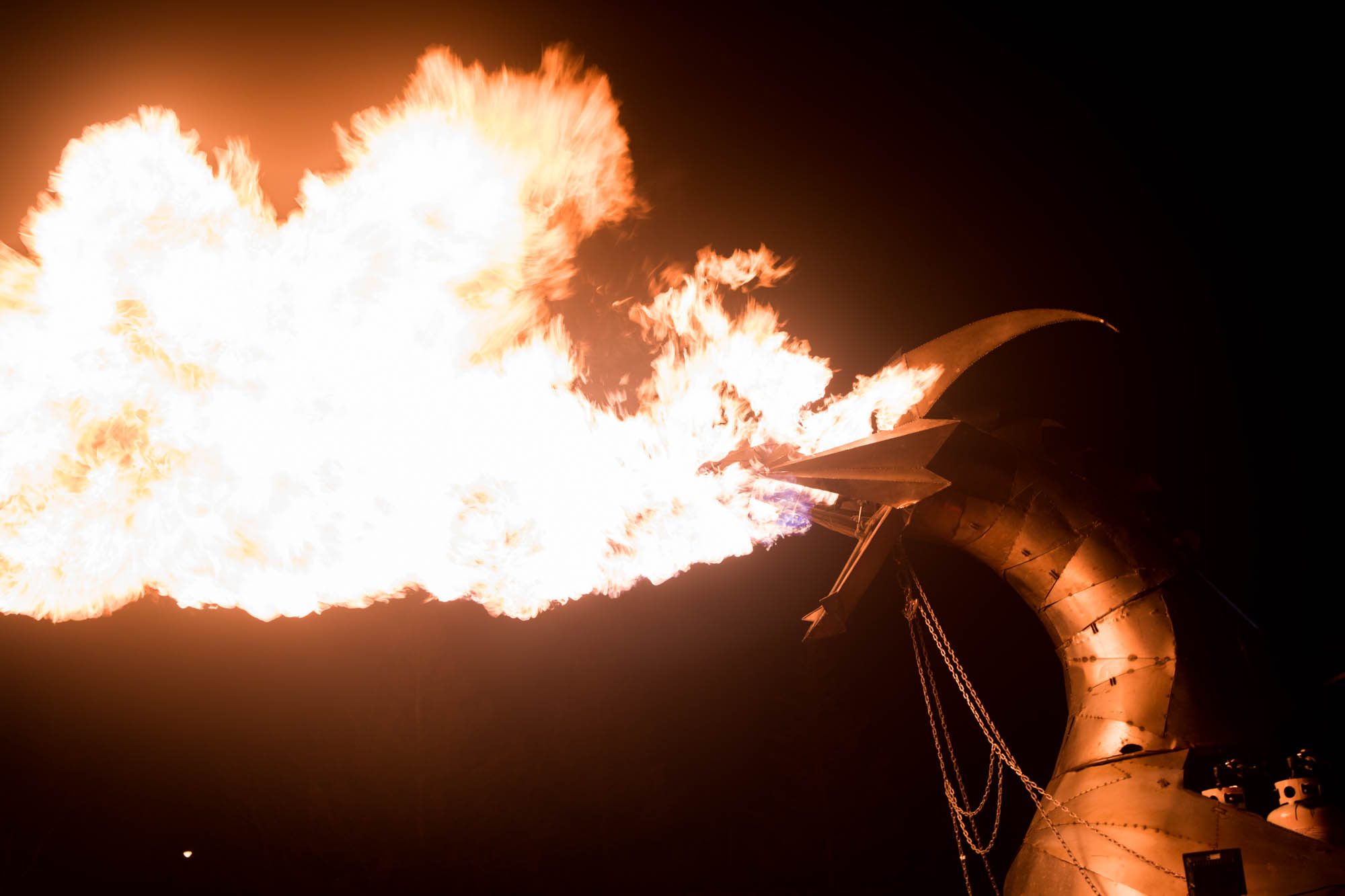 By the Heavy Meta Collective
On especially wintry nights, visitors would be wise to stay close to this 19-foot-tall, Mad Max–esque metal dragon, which spews fire from both its tail and mouth. 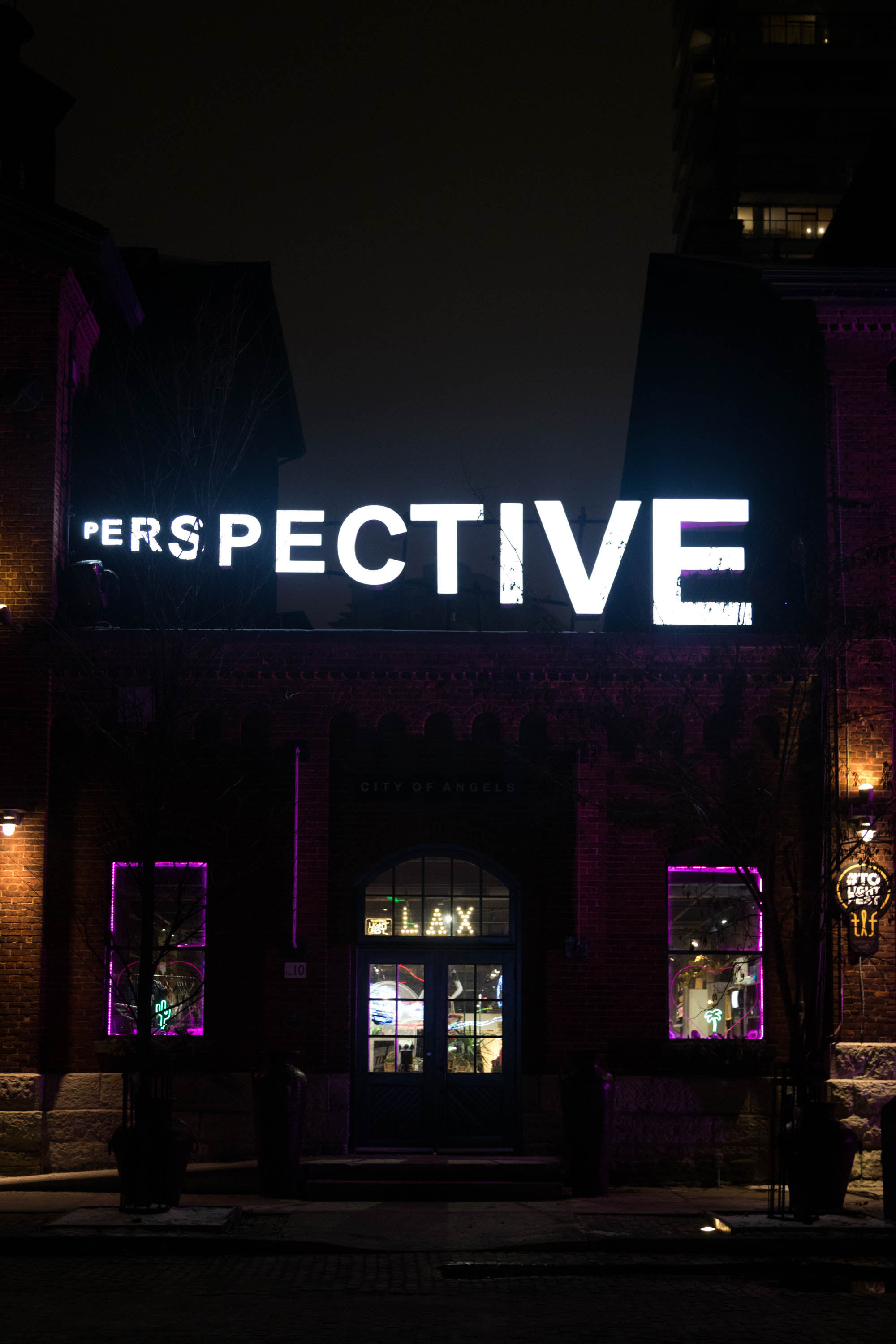 By Studio Rosenblatt
The exhibition showcases a few pieces by festival director Matthew Rosenblatt, whose focus as curator was to choose pieces that visitors could interact with. 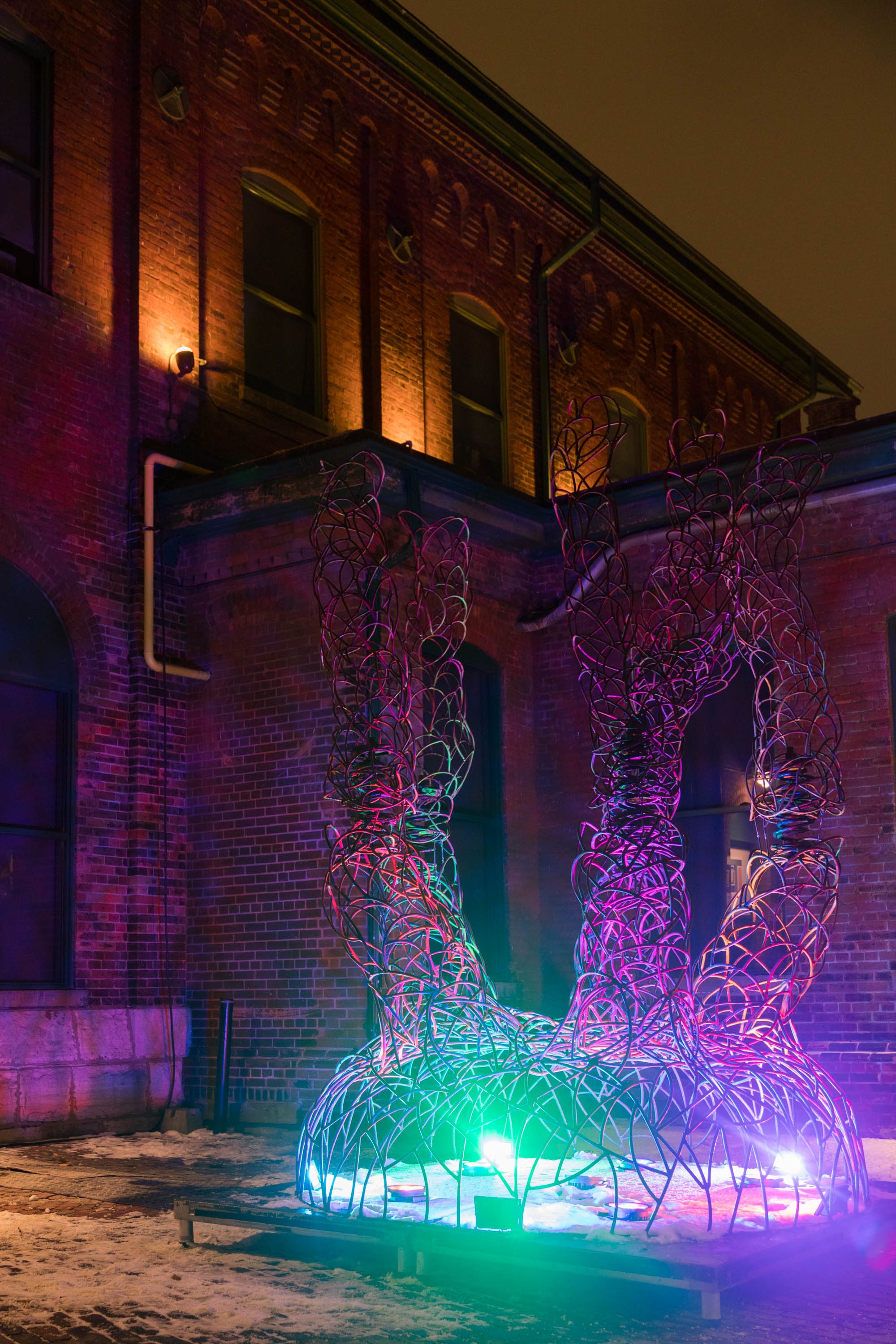 By Jessica Levine
The twisted steel mimics coral; the columns are supported by springs that allow them to sway gently in the wind. 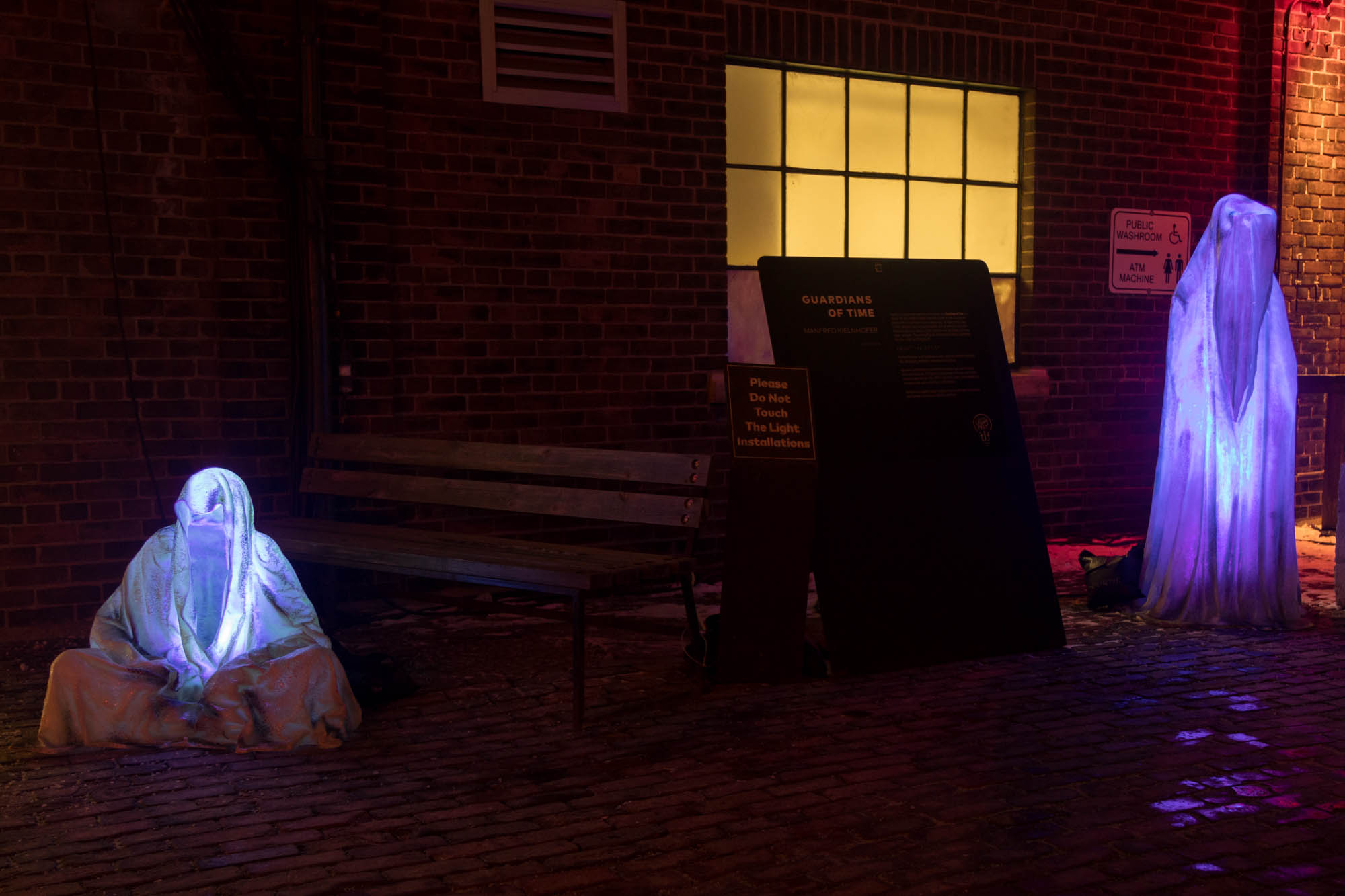 By Manfred Kielnhofer
These Dementor-like creatures are tucked in alleyways and nooks all over the Distillery District. They’re somehow both eerie and comforting at the same time. 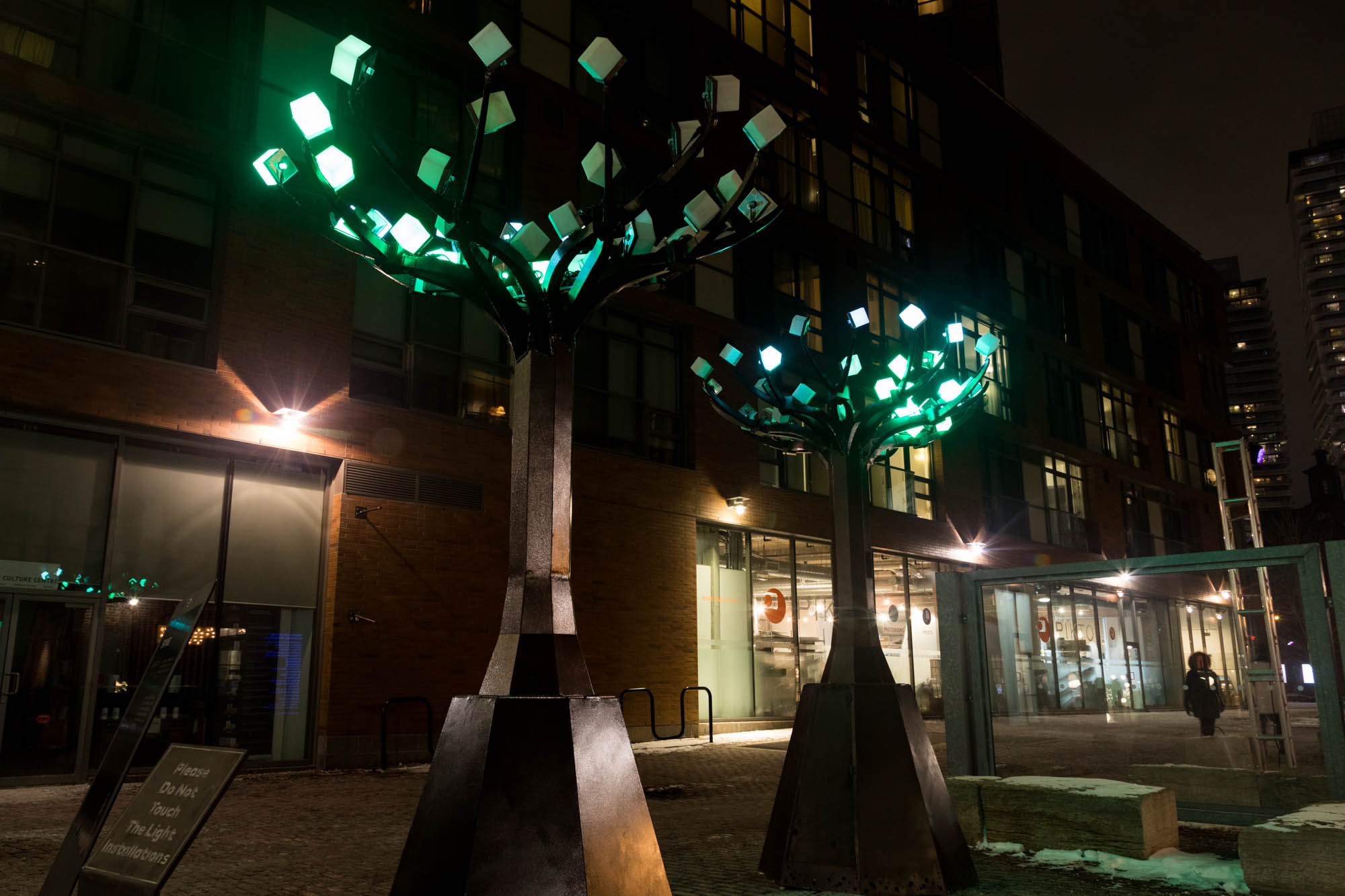 By Charles Gadeken
These tree/street-lamp hybrids are meant to blur the boundary between the organic and manmade. 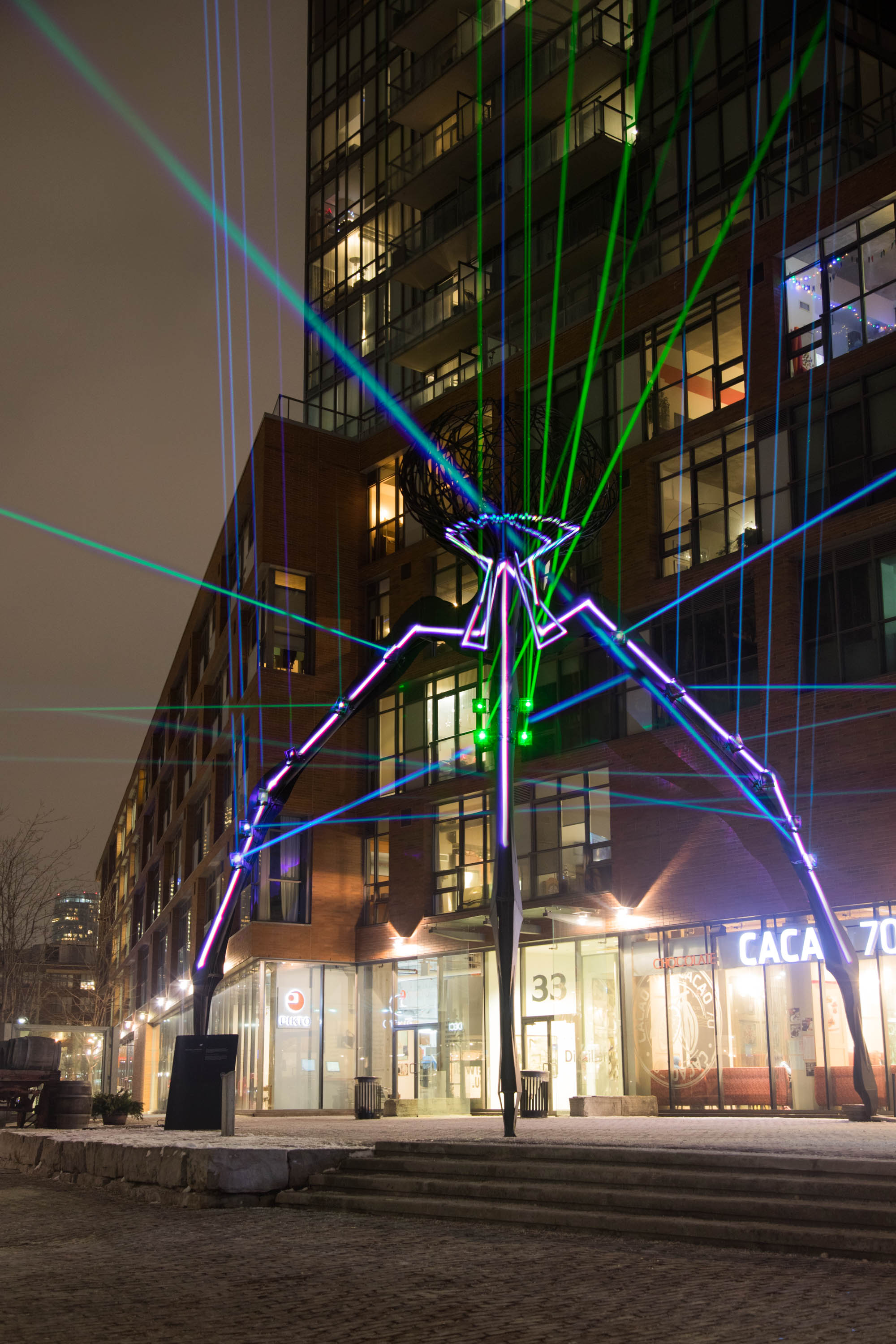 By Michael Christian, lasers by PDIFX
The District’s permanent spider sculpture along Gristmill Lane will be dressed up in lasers for the duration of the 45-day festival. 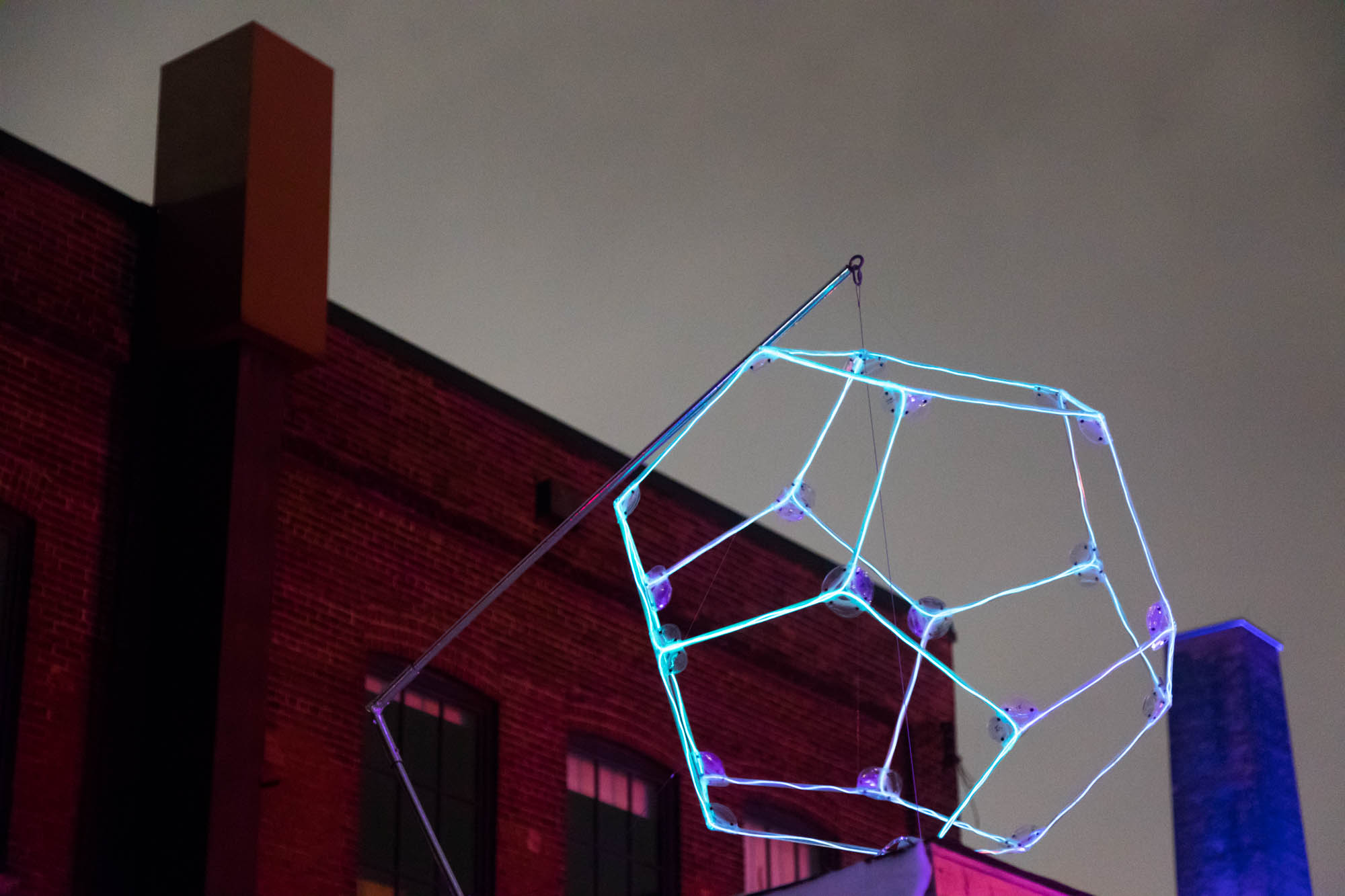 By Martin Taylor
This neon polyhedron is suspended above the hot chocolate vendor in the square with the food stalls. 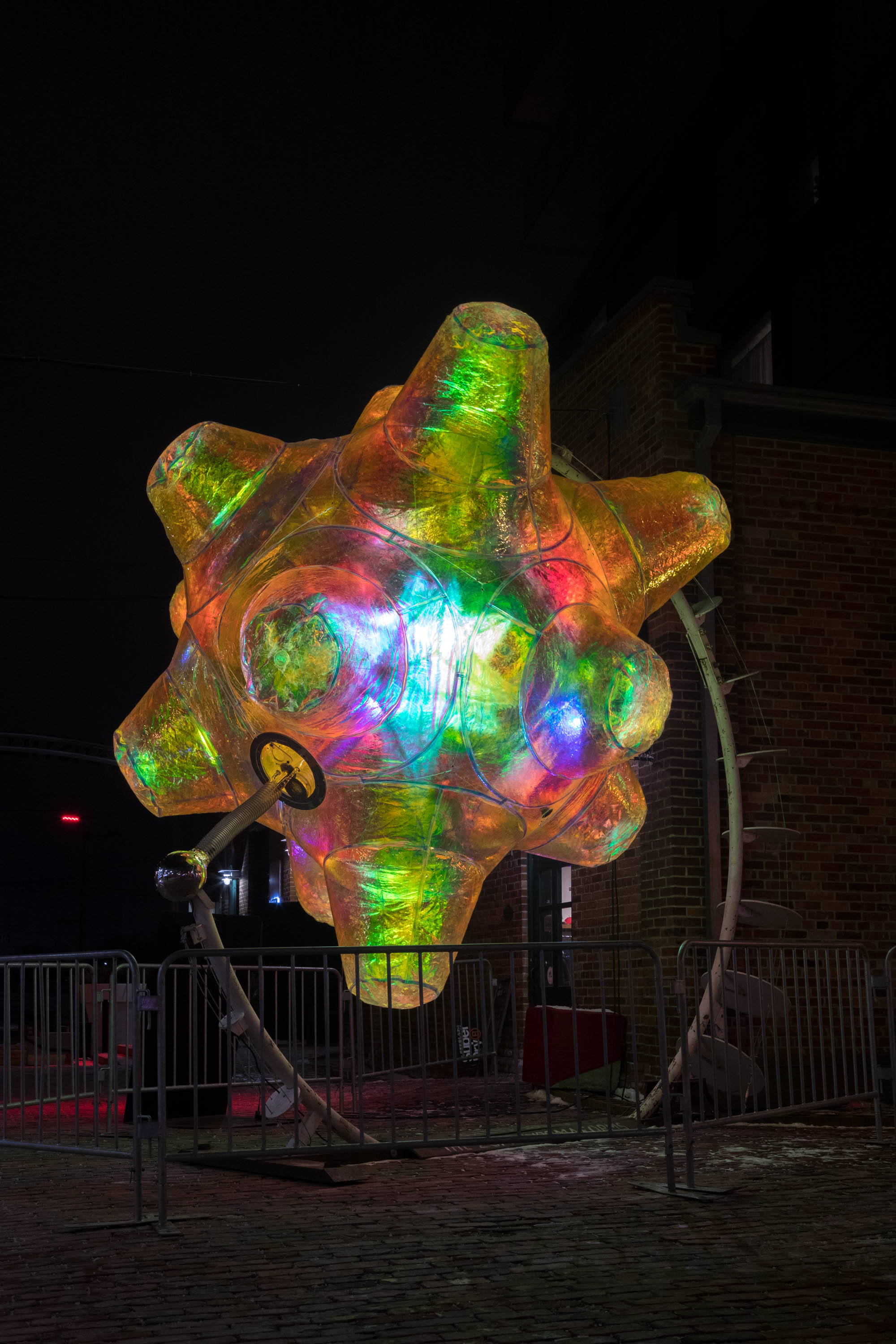 By Davis McCarty
At the end of Tank House Lane, light pulsates gently from within this sculpture, a glowing shape reminiscent of Minesweeper. 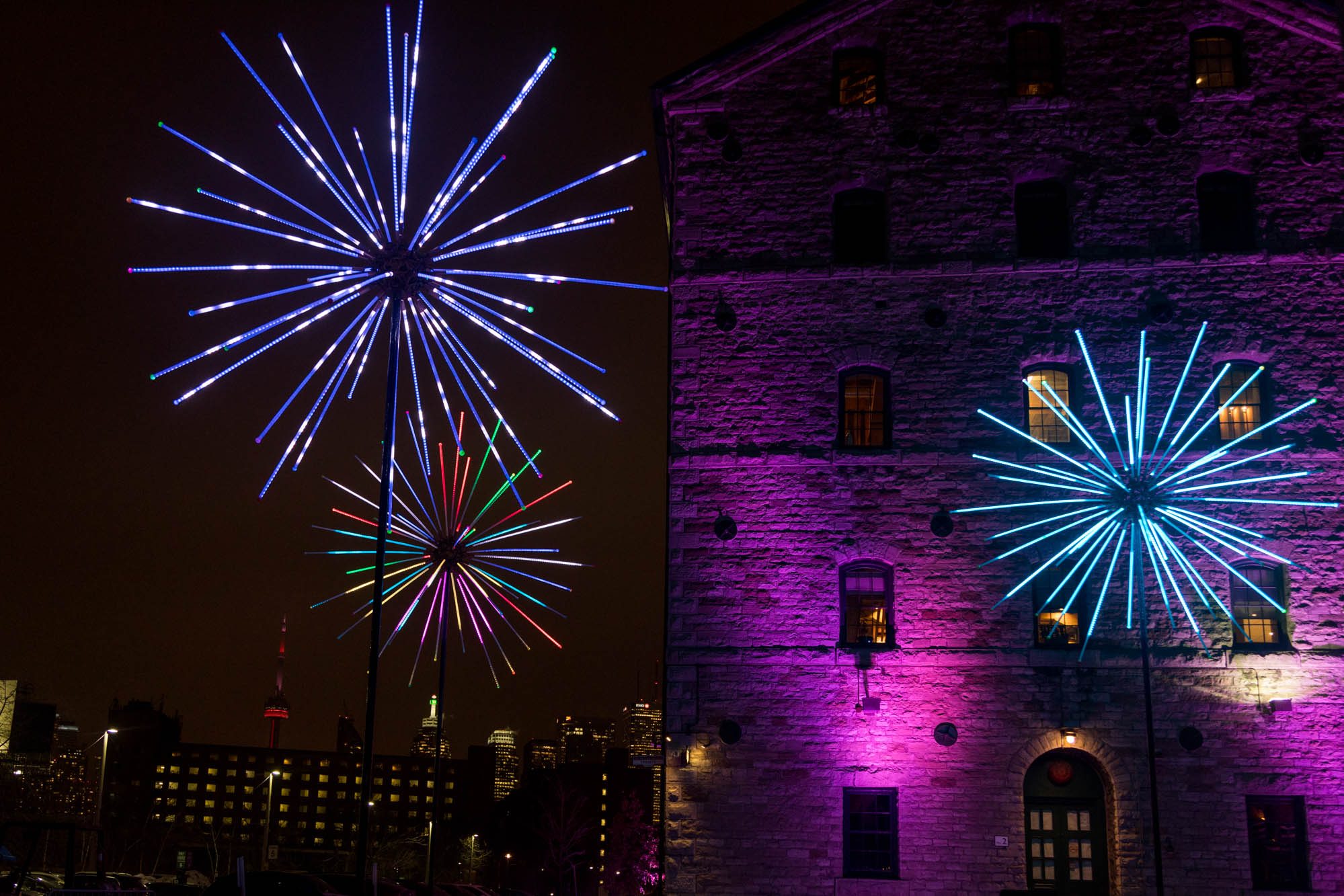 By Abram Santa Cruz
Three 27-foot-tall neon dandelions have sprung up at the base of Trinity Street, displaying a psychedelic LED light rhythm. 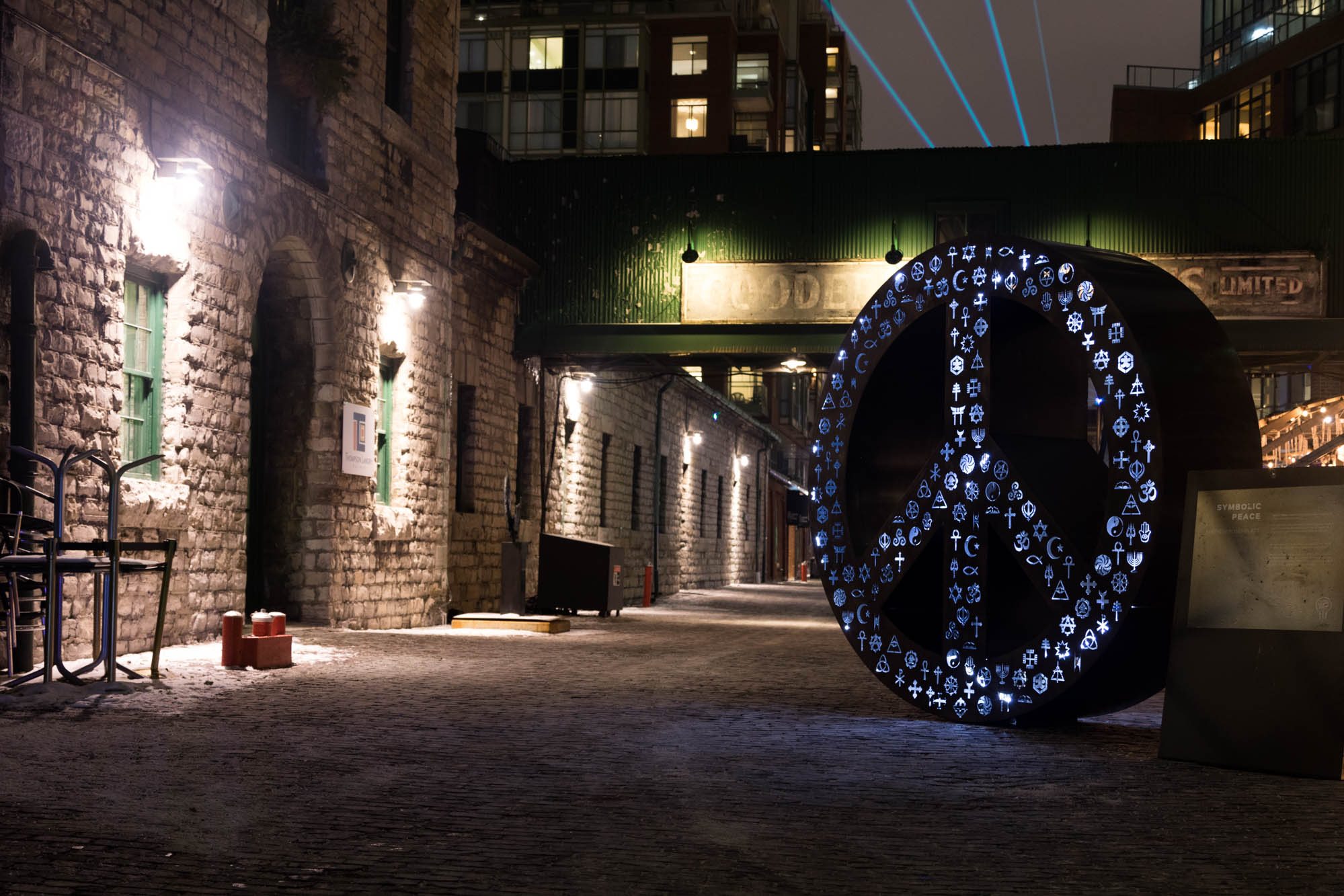 By Studio Rosenblatt
Another piece from festival director Rosenblatt is an optimistic riff on peace, a common value between cultures and religions. 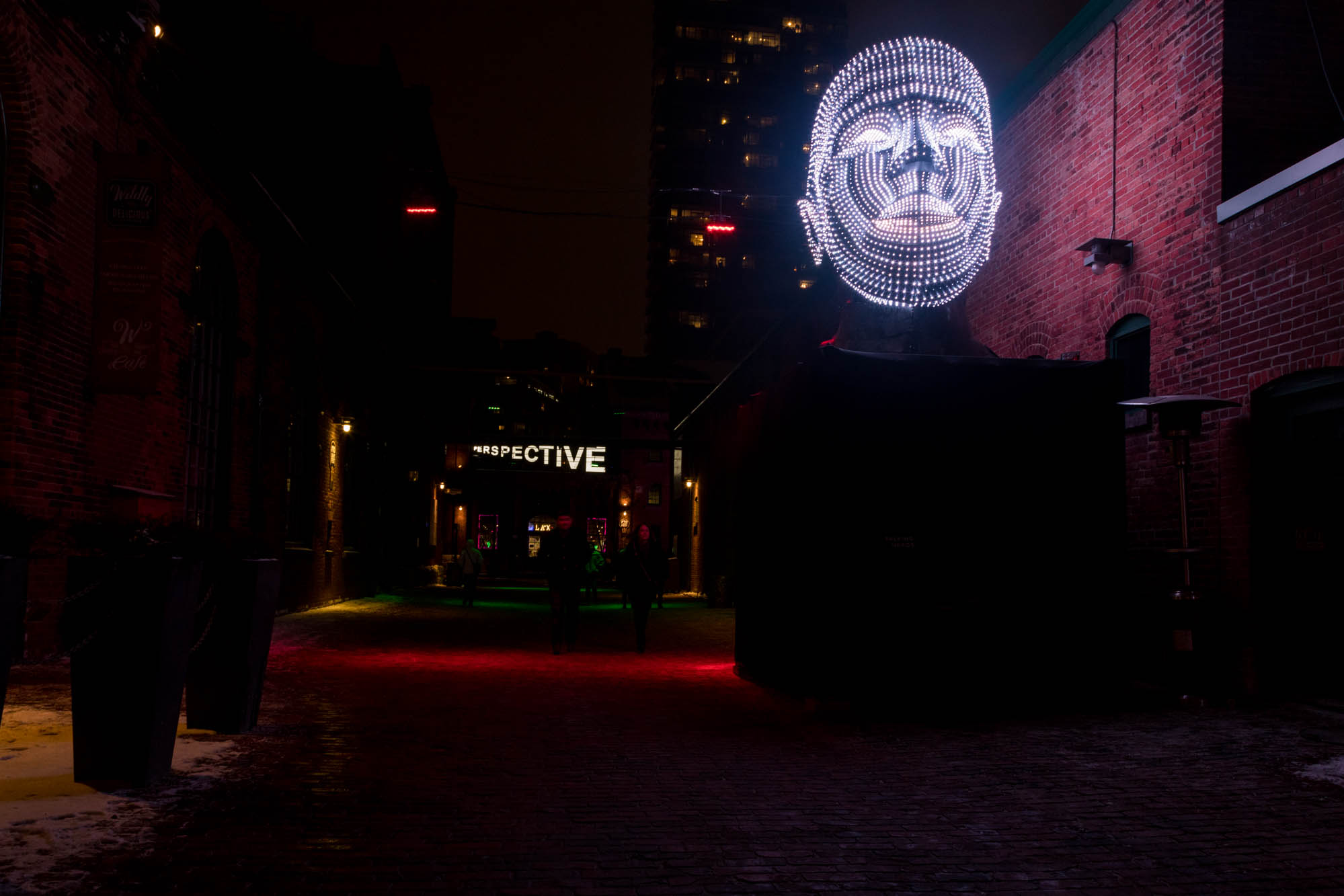 By Victor Vicsek
Two larger-than-life talking heads face each other along Tank House Lane. Don’t be alarmed if they seem to pick up on your movements. 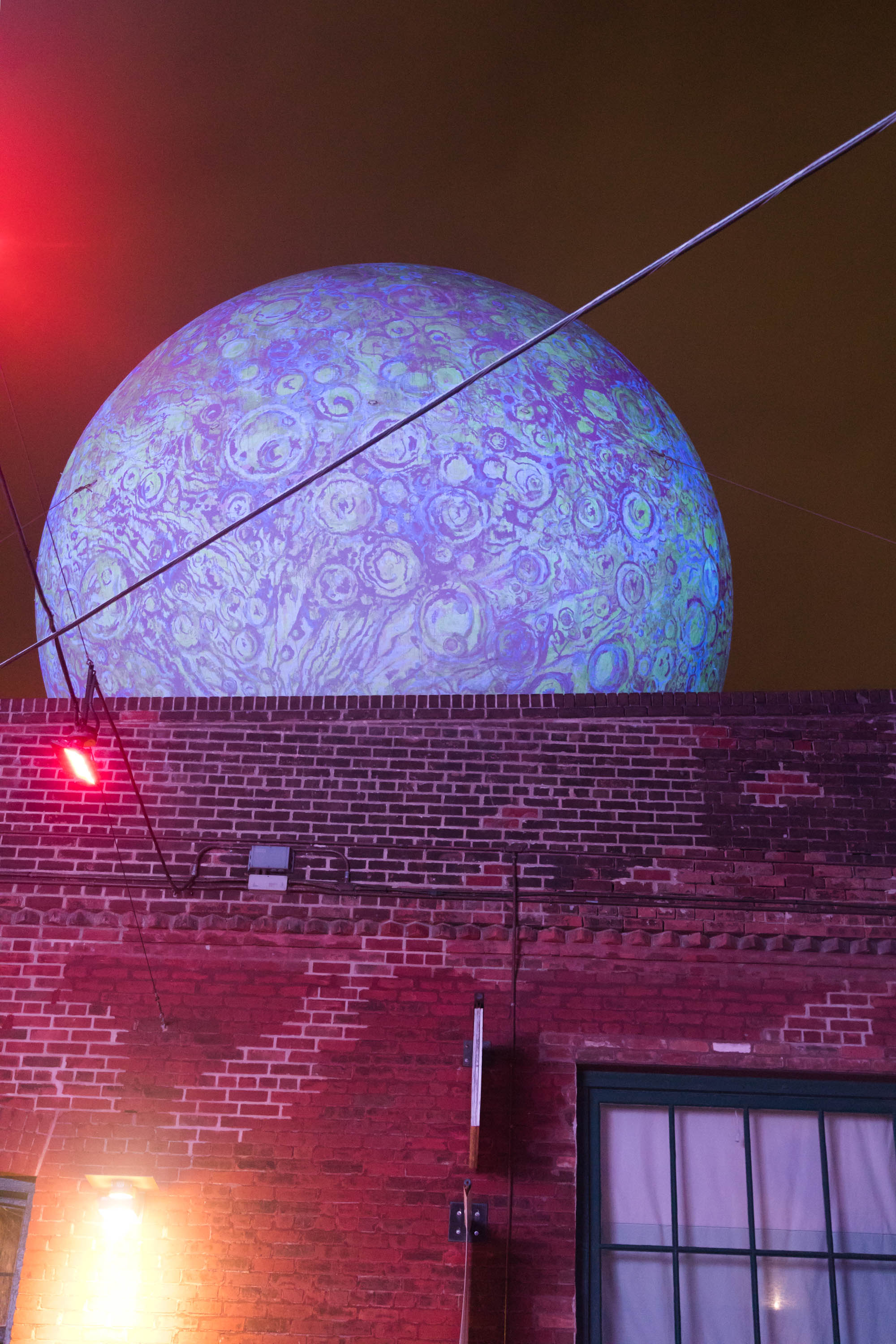 By Stichting Barstow
A giant watercolour swirl of a moon sits serenely at the heart of the neighbourhood.