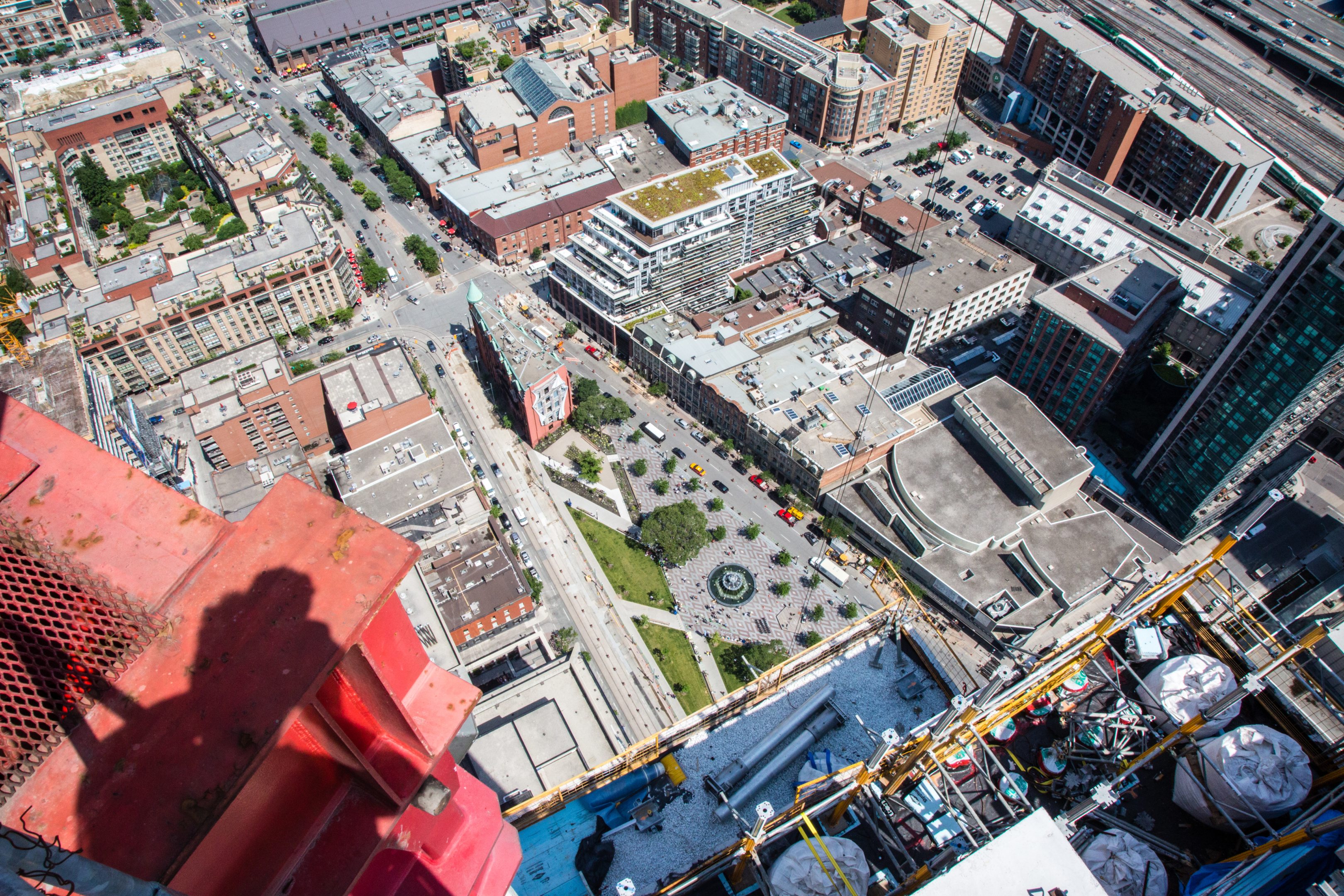 Toronto photographer Tony Cicero has travelled the world, capturing a gold-mining expedition in Patagonia, the Tour de France in the Pyrenees mountains and a music festival in the Swiss Alps. He shot his latest project, Cranes in the City, right here in his hometown—atop a crane platform 700 feet high.

In May, Cicero met George Petrantonakis, “the Wayne Gretzky of crane operators,” and asked if he could photograph him on the job to capture the city’s massive growth (in July, Toronto had 72 cranes in the sky, more than any other North American city). This past summer, Cicero shadowed Petrantonakis during the construction of 88 Scott Street, a 58-storey condo in the Financial District. We asked Cicero to share the stories behind some of his most striking images, on display now until November 11 at the Manulife Centre Residences’ event room. 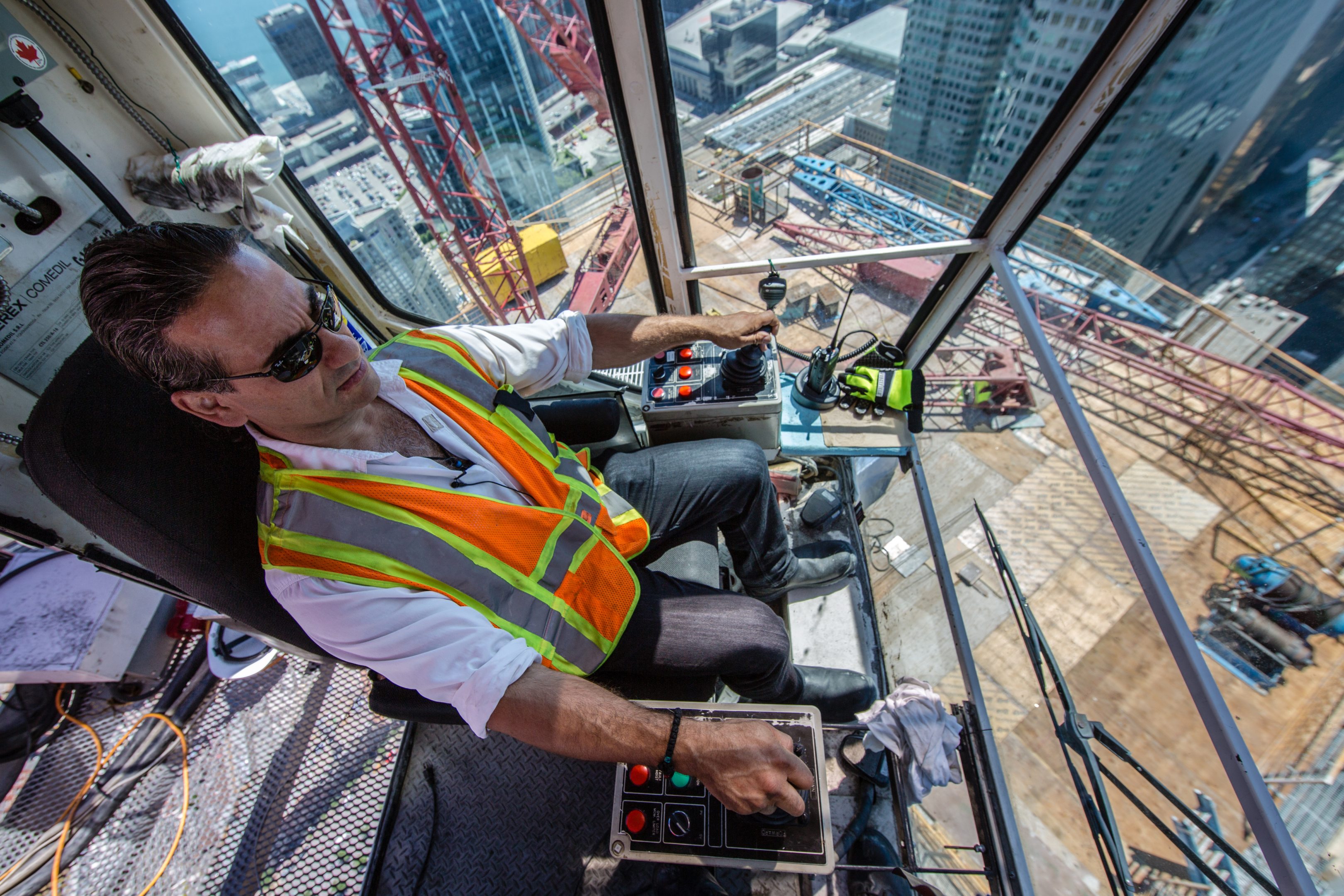 Petrantonakis, who moved to Toronto in 2002, needs to be able to read the weather and deal with unique challenges—wind tunnels and vortexes—while dropping loads safely in tight quarters. “If you are building Trump Tower right beside First Canadian Place and Scotia Plaza, you better not bump into anything beside you,” Cicero says. The ideal conditions for lifting heavy objects: a hot summer day, when the air is thick and humid and there is no wind. On most shifts, Petrantonakis strips down to his shorts or boxers because of how hot it gets in the cabin—even in the winter. Once, he was still sweating while enjoying an ice cream sundae in -30-degree weather. 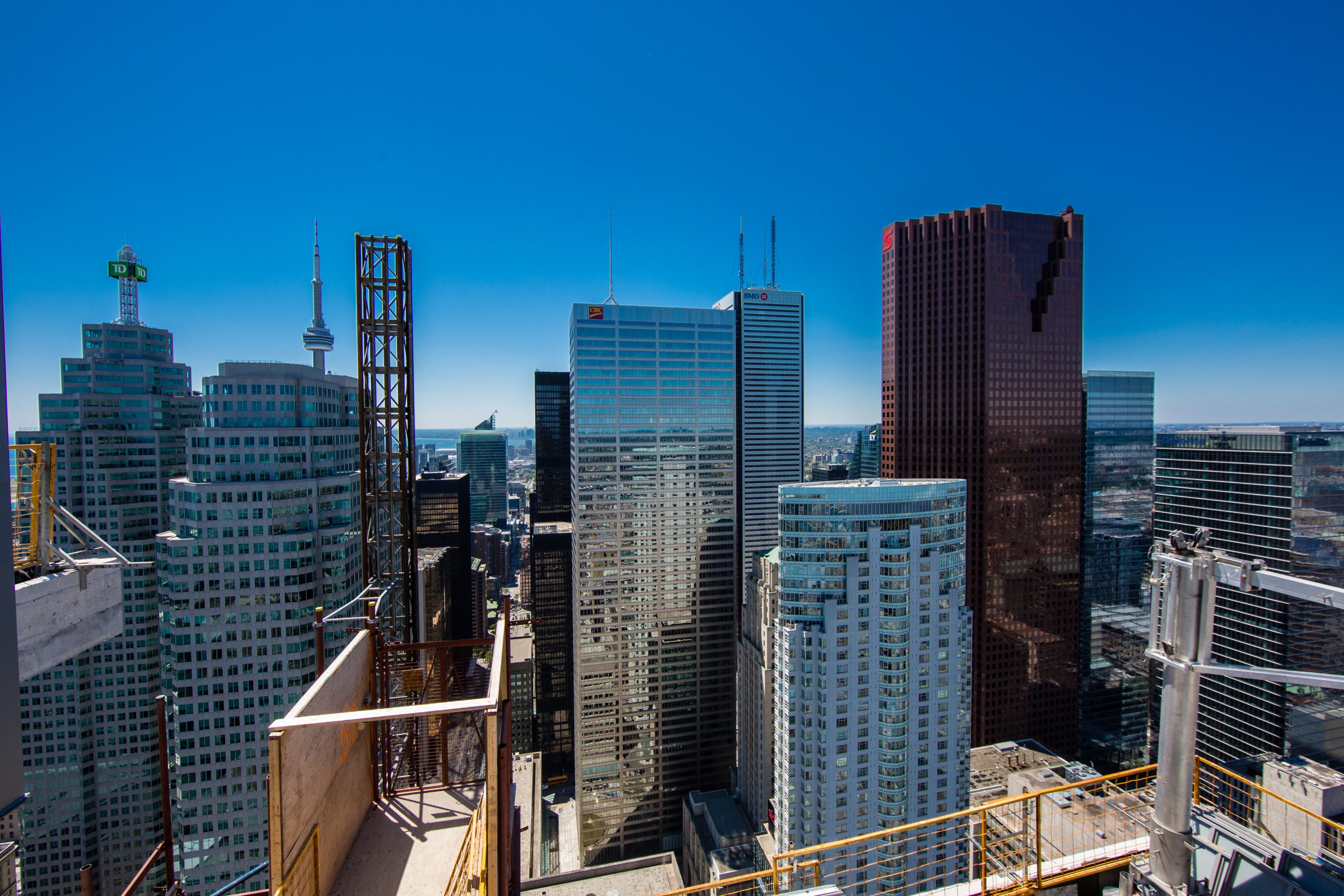 Petrantonakis has worked on about 12 buildings, including some of the tallest skyscrapers in the city: Trump Tower, the Four Seasons, the Ritz-Carlton, RBC Centre and the Residences of Maple Leaf Square. “When he sees buildings he has worked on in the skyline, it’s satisfying,” Cicero says. “The scale of the projects is mesmerizing.” 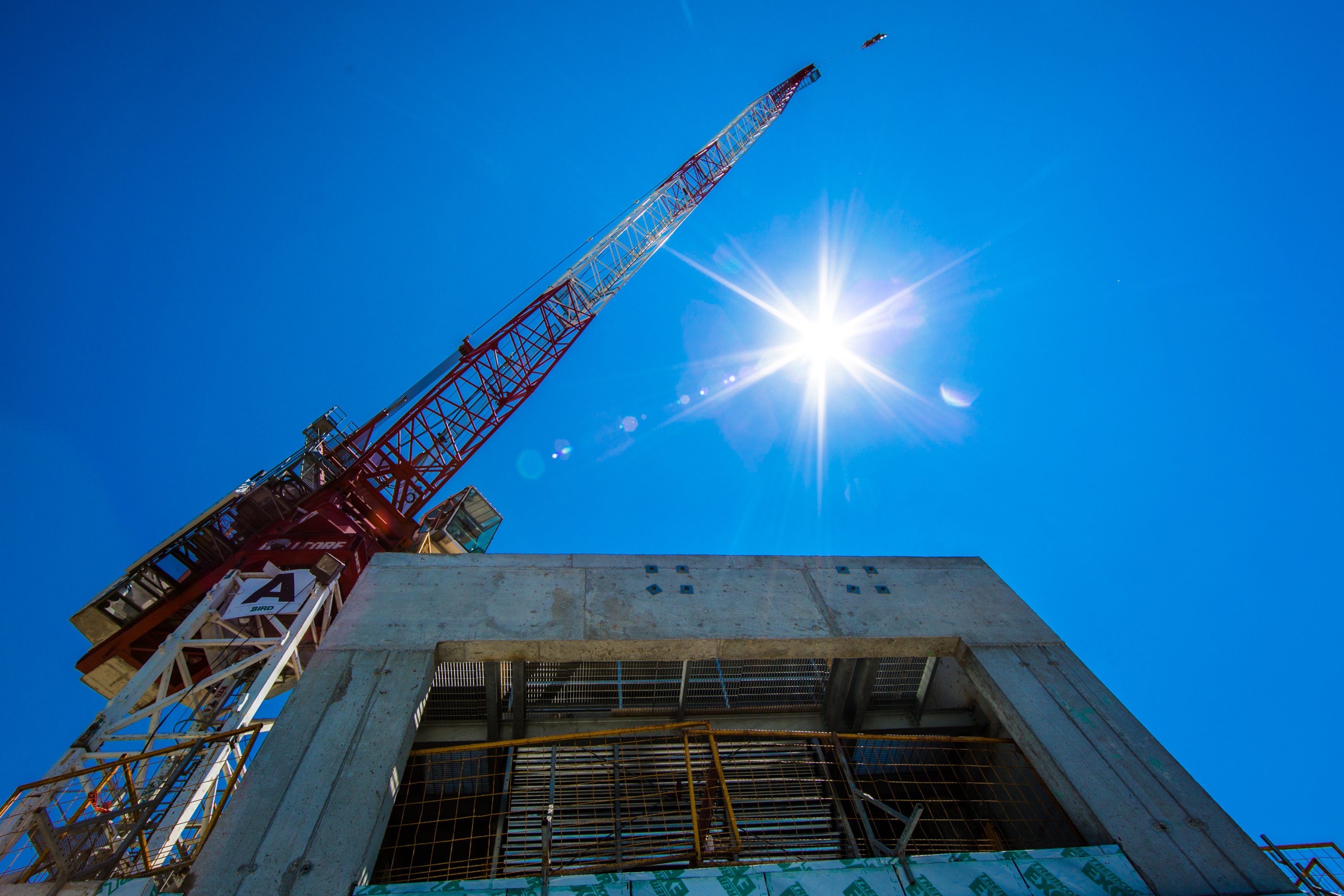 On a regular day of construction, Petrantonakis arrives around 6 a.m. and takes the freight elevator up to the roof of the condo. 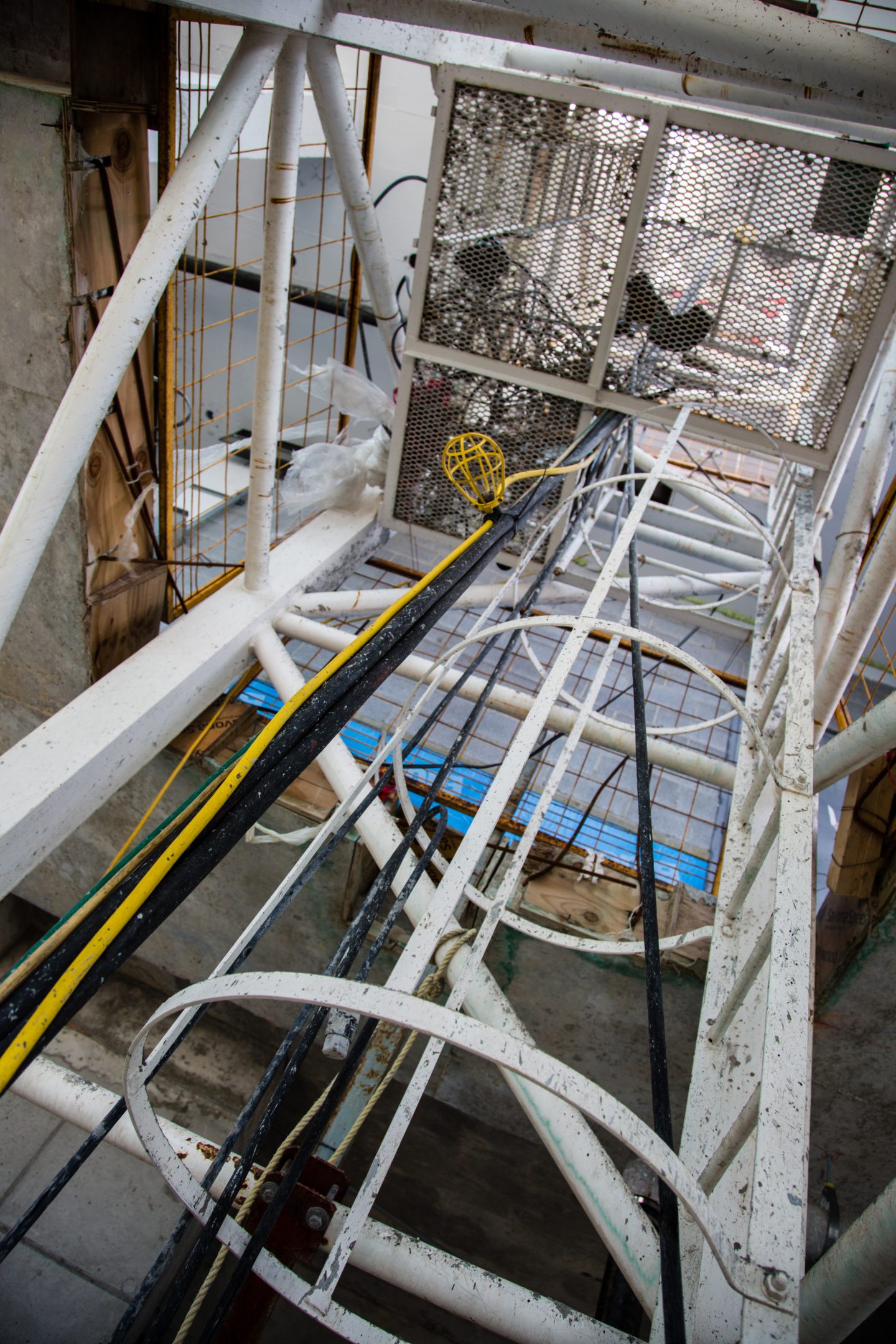 From there, he climbs the crane shaft to reach the cabin, 10 storeys above the roof of the condo. It takes him up to a half-hour to get up there, which is why he doesn’t go back down—not even to use the washroom (he uses a water bottle). He works as long as 14 hours at a time (some crane operators have kettles and toaster ovens in their cabins). “He’s always the first guy there and the last to leave,” Cicero says. Petrantonakis regularly treats his team with doughnuts, muffins, chocolate bars and coffee. 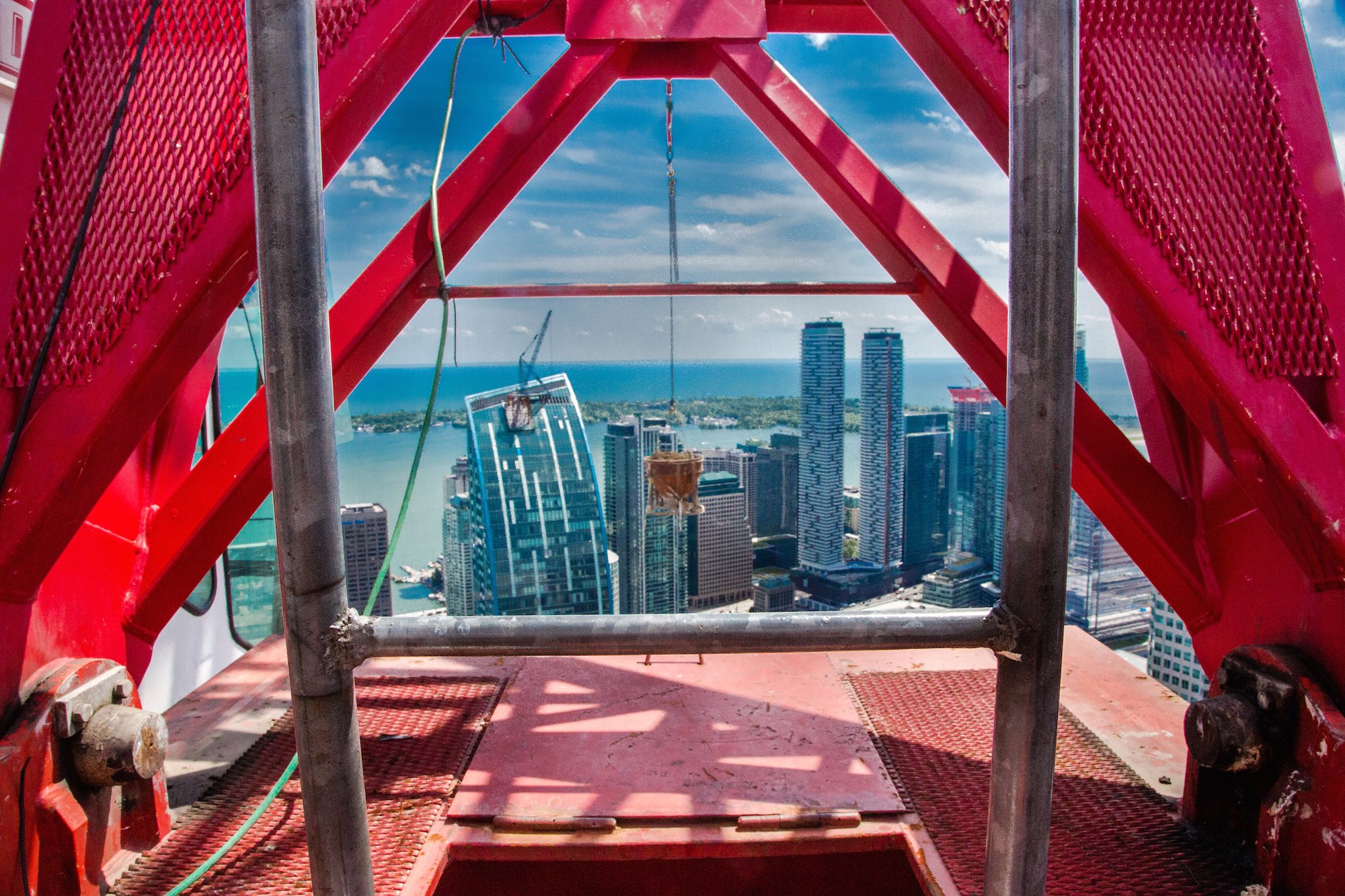 The best part of the job is the amazing view. “It’s peaceful and quiet, like you are on top of a mountain,” Cicero says. “George was calm and relaxed, even though it’s a high-stress job.” 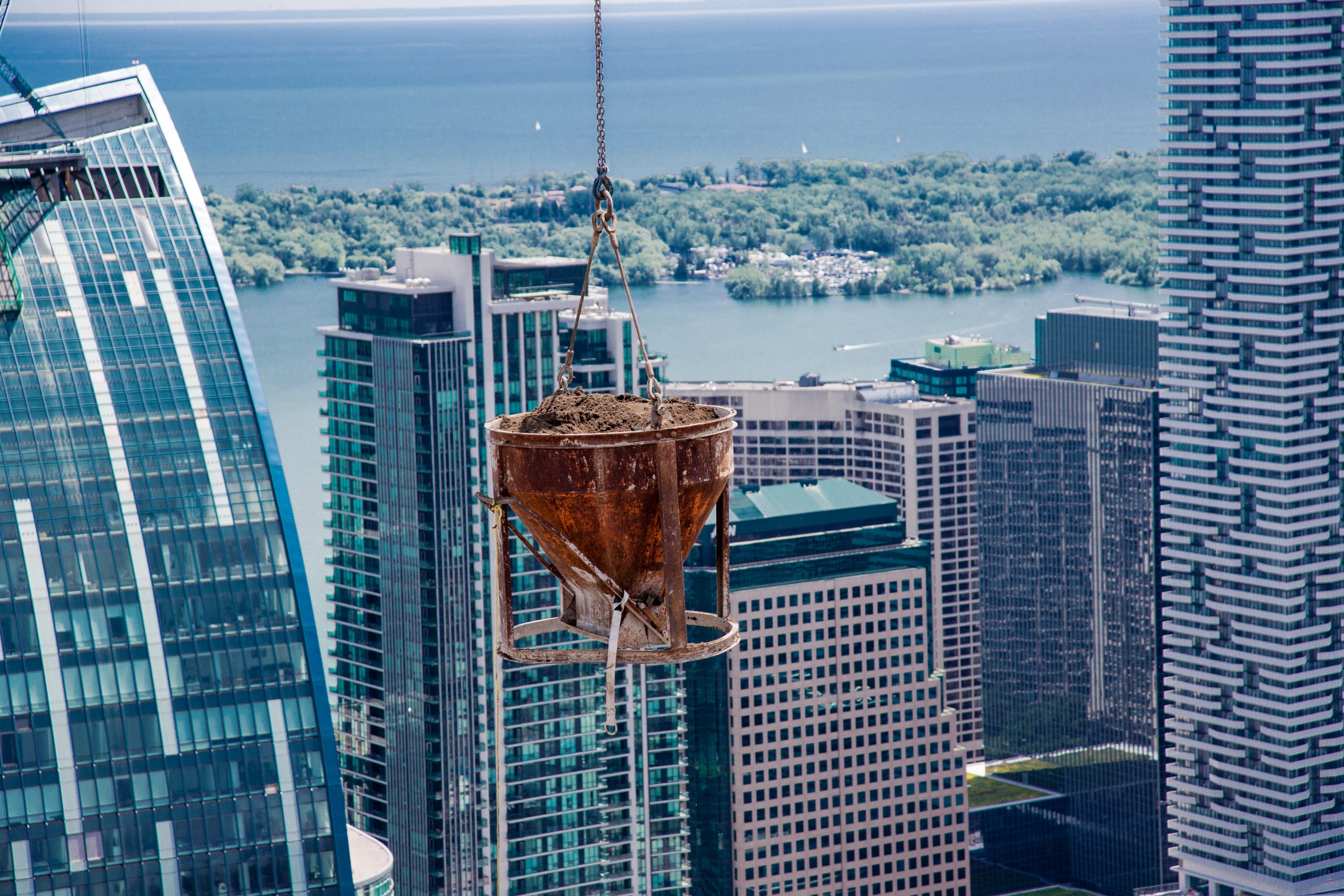 During construction of 88 Scott, Petrantonakis lifted 15 12,000-pound buckets of dirt 590 feet high for the condo’s rooftop garden. “An empty bucket is a lot more difficult to handle because it has no weight and the wind will toss it around like a balloon,” Cicero says. “A full bucket is a deadweight and just goes straight up or down.” He also hauled up each of the building’s window panes; they weighed up to 2,000 pounds and took up to 15 minutes apiece. The trick? Go slow and steady. “It’s like flying a kite,” Cicero says. “The window will pick up wind so easily that the crane operator has to know how to ride the wind.” 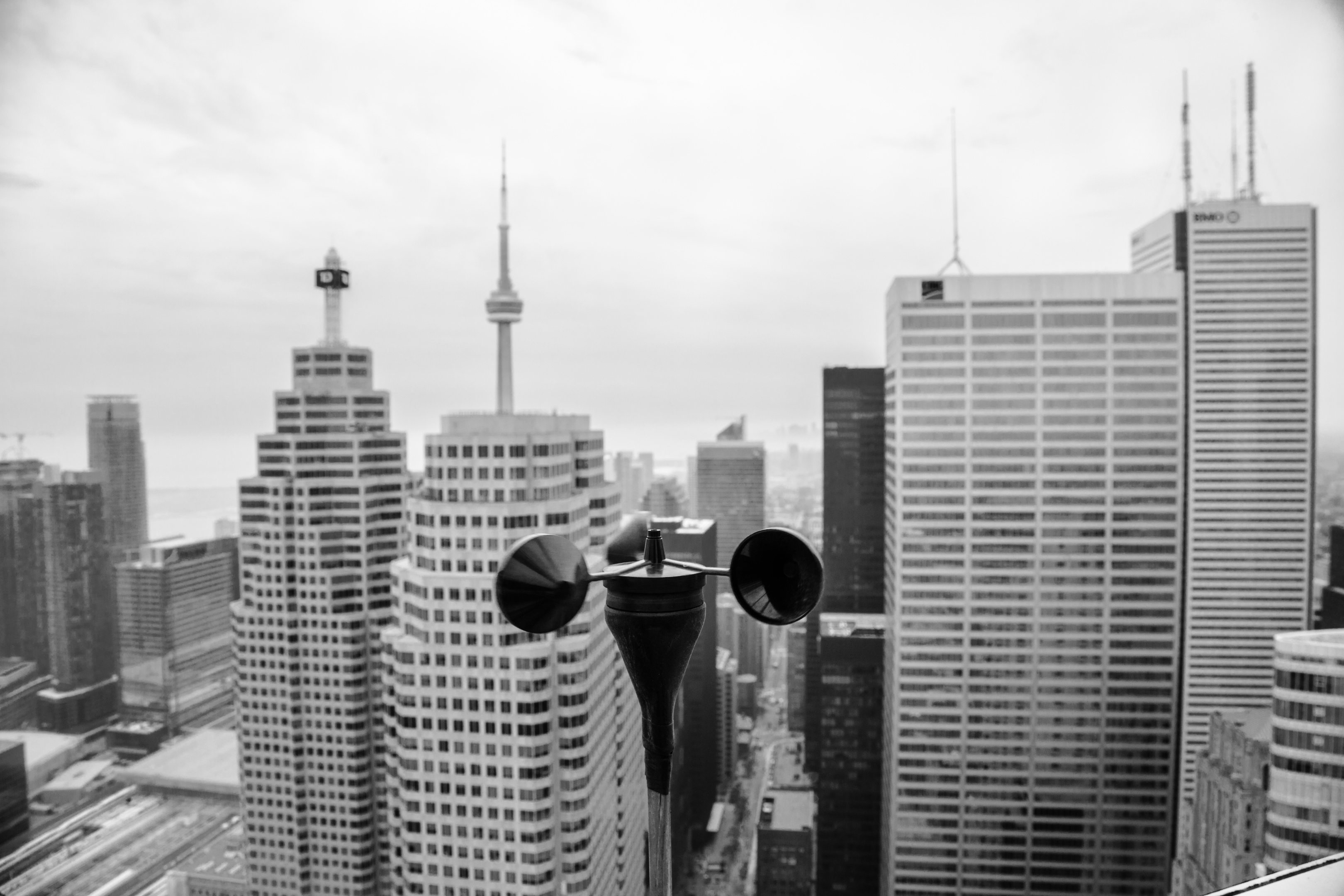 Sitting on the outside wall of the cabin, this anemometer measures wind speed. When it’s greater than 50 kilometres per hour, Petrantonakis isn’t allowed to operate a crane for safety reasons. Thunderstorms can also pose a threat. In summer 2010, when Petrantonakis was working on the Trump Tower, a thunderstorm caused an electrical fire in the heart of the crane around midnight, and it began spinning around like a propeller. Petrantonakis and a mechanic climbed the outside of the moving crane in the storm to untangle some wires and cut a rope that was causing the spinning. Later, Petrantonakis ran into Ivanka Trump in the building’s freight elevator. She had heard about the incident, thanked him and took a photo with him. 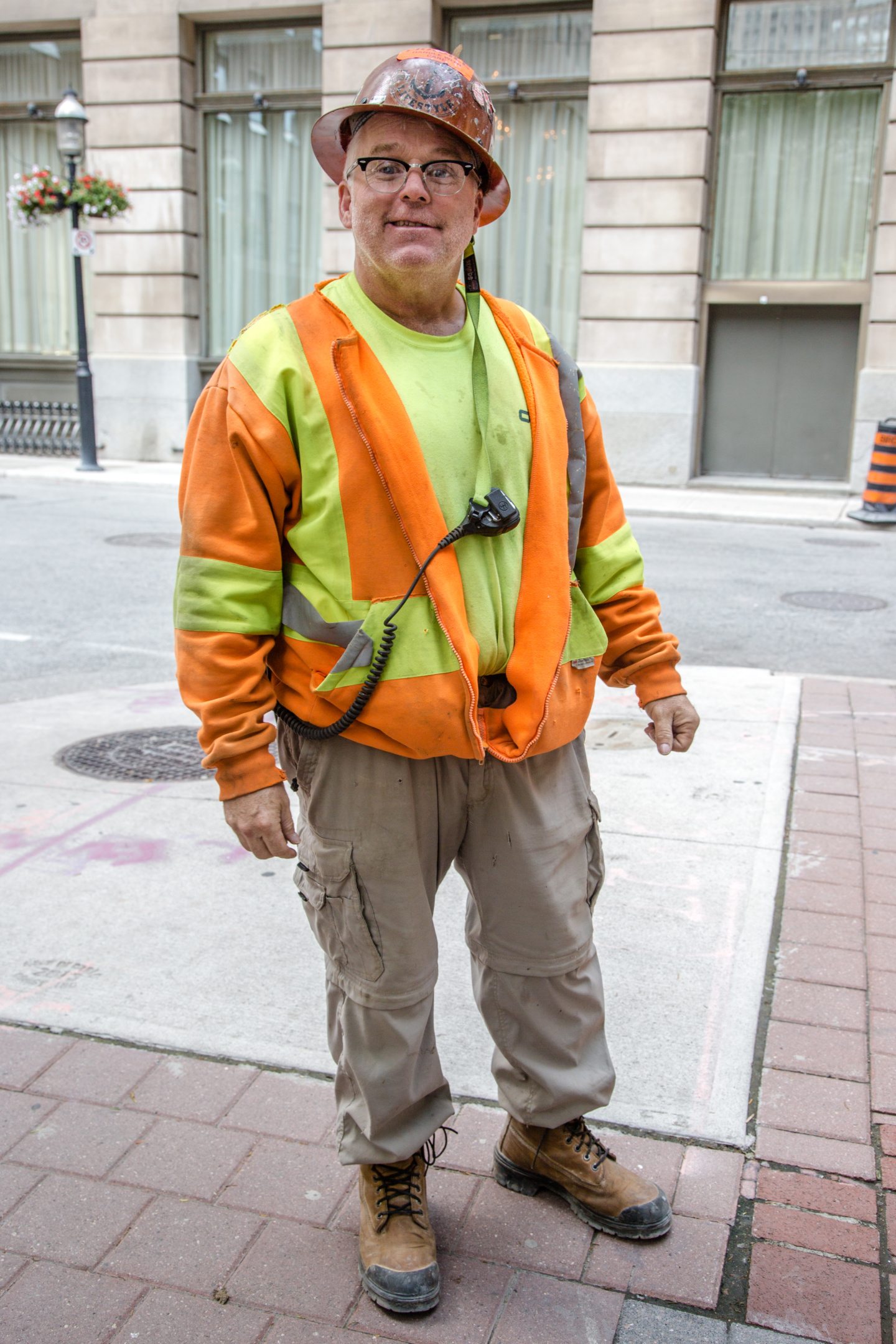 Most jobs require just one crane operator. They need two “swampers,” like Richard Harris, to be their eyes and ears and provide precise instruction via walkie-talkie from the roof of the building or the pit of the construction site. Cicero says Harris is an old-school construction worker: tough but humble and quiet. “Most swampers have neck problems by the end of their career because they are always looking up,” he says. 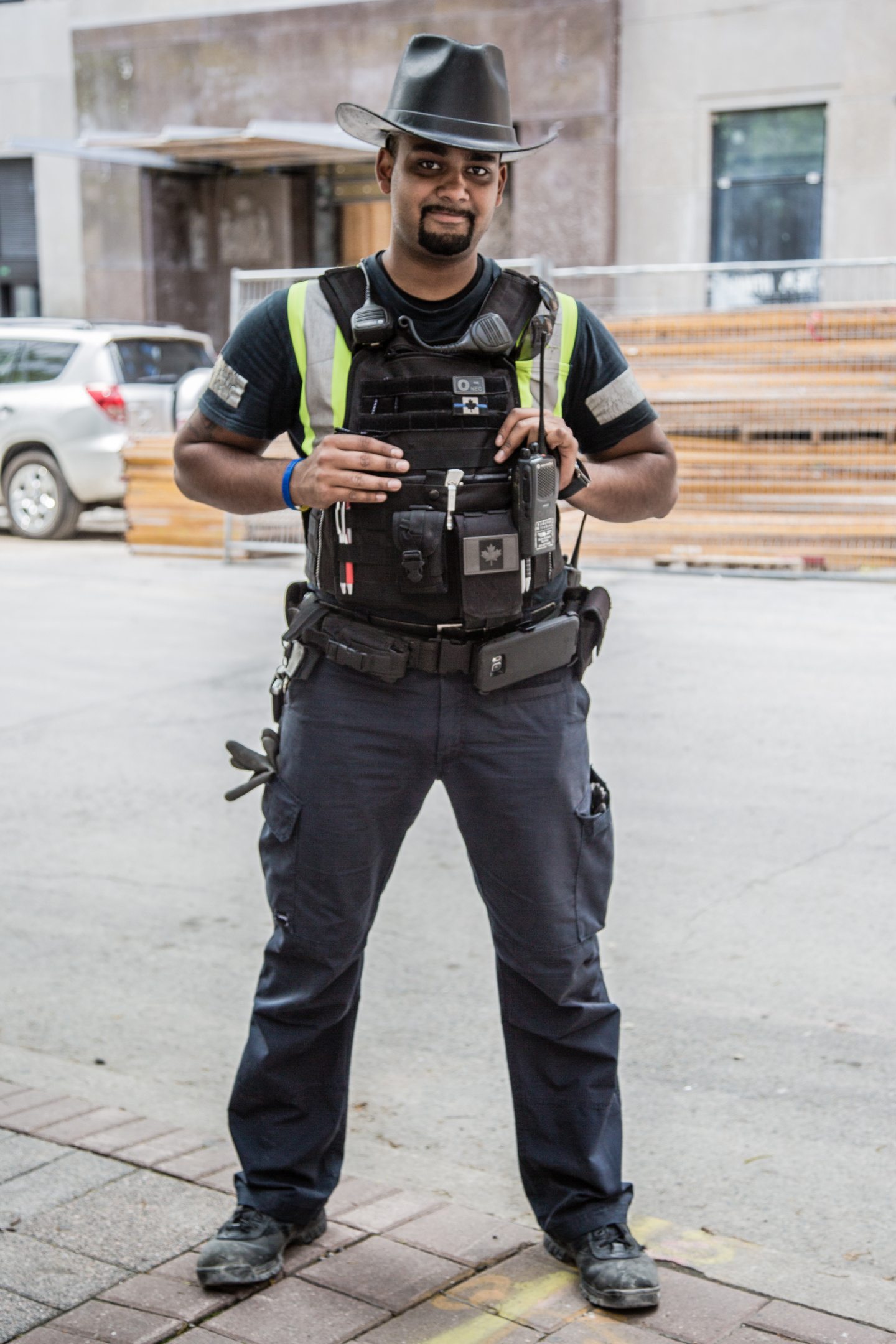 Petrantonakis’ other wingman is traffic and safety officer Khalil Mohamed, whose nickname is Robocop because of his outfit. “Like on any construction site, they joke around with each other,” Cicero says. “But they are serious about their work—because it’s very dangerous.” Mohamed is responsible for stopping cars and pedestrians when there’s danger overhead, and he’s used to being yelled at by impatient businessmen. He has been hit by cars twice. 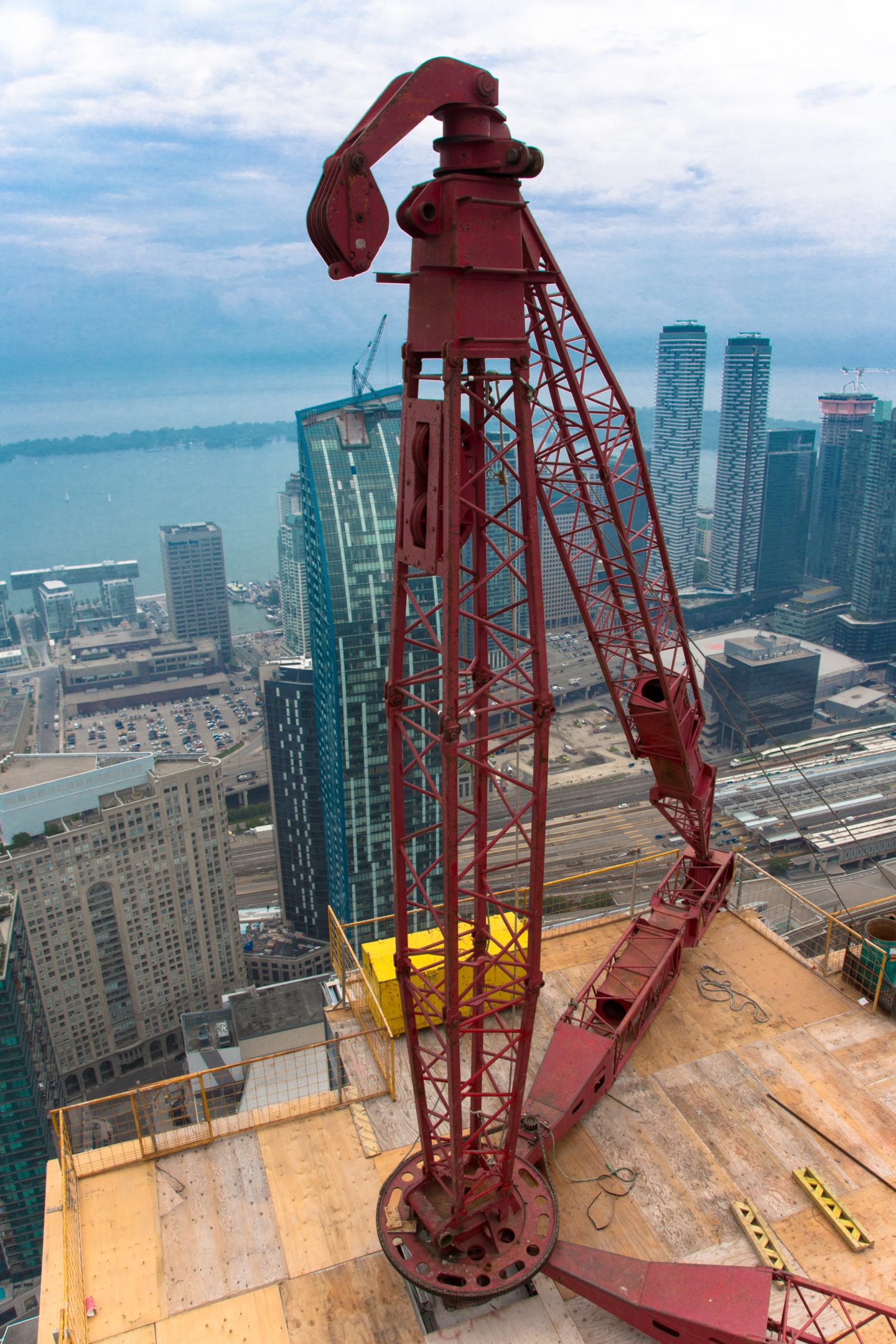 In July, when construction was mostly complete, builders installed this derrick on the condo’s roof and used it to deconstruct the crane. When that was done, a smaller derrick took down this derrick, at which point all the pieces were small enough to fit in the freight elevator. 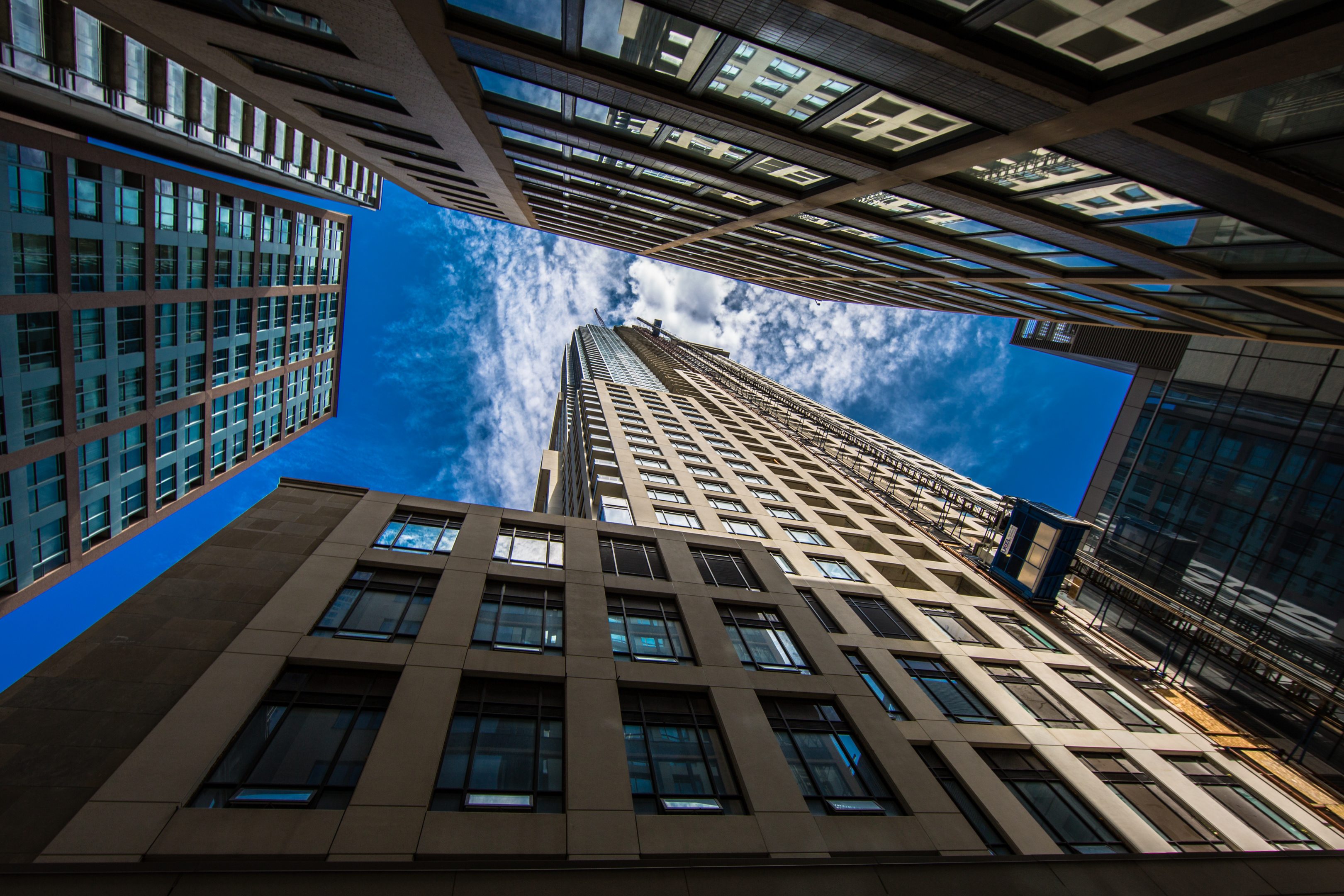 Petrantonakis has been working on 88 Scott since 2014. It is scheduled to be complete by the end of the year. “It is a significant part of the skyline now—a new player in the big buildings club,” Cicero says. “We are in the construction phase that New York was in back in the 1930s, when all their skyscrapers like the Rockefeller Center were being built. And this isn’t going to stop for another 20 or 30 years.”

An earlier version of this post incorrectly stated that Petrantonakis is one of five crane operators in the city allowed to work on buildings more than 30 storeys high. The number of such operators is in fact higher.