As a photographer who specializes in portraits of women, Natalia Dolan has a strong appreciation of female friendships.“They allow us to be vulnerable, to be stupid, to cry,” says Dolan, who runs the photo studio One Two Many. “As females, we tap into friendships much differently from men—we use them as strength builders.”

This past January, she launched the Girl Friends photo series to celebrate those friendships. She sent a call out to clients and colleagues, reached out to the people behind female-focused blogs and webcasts, and contacted organizations like Girls in STEM and Big Brothers Big Sisters. Groups of friends responded in droves, and Dolan invited them into her studio, where they get the chance to act silly with their besties. Here, the stories behind 10 of our favourite photos from the series. 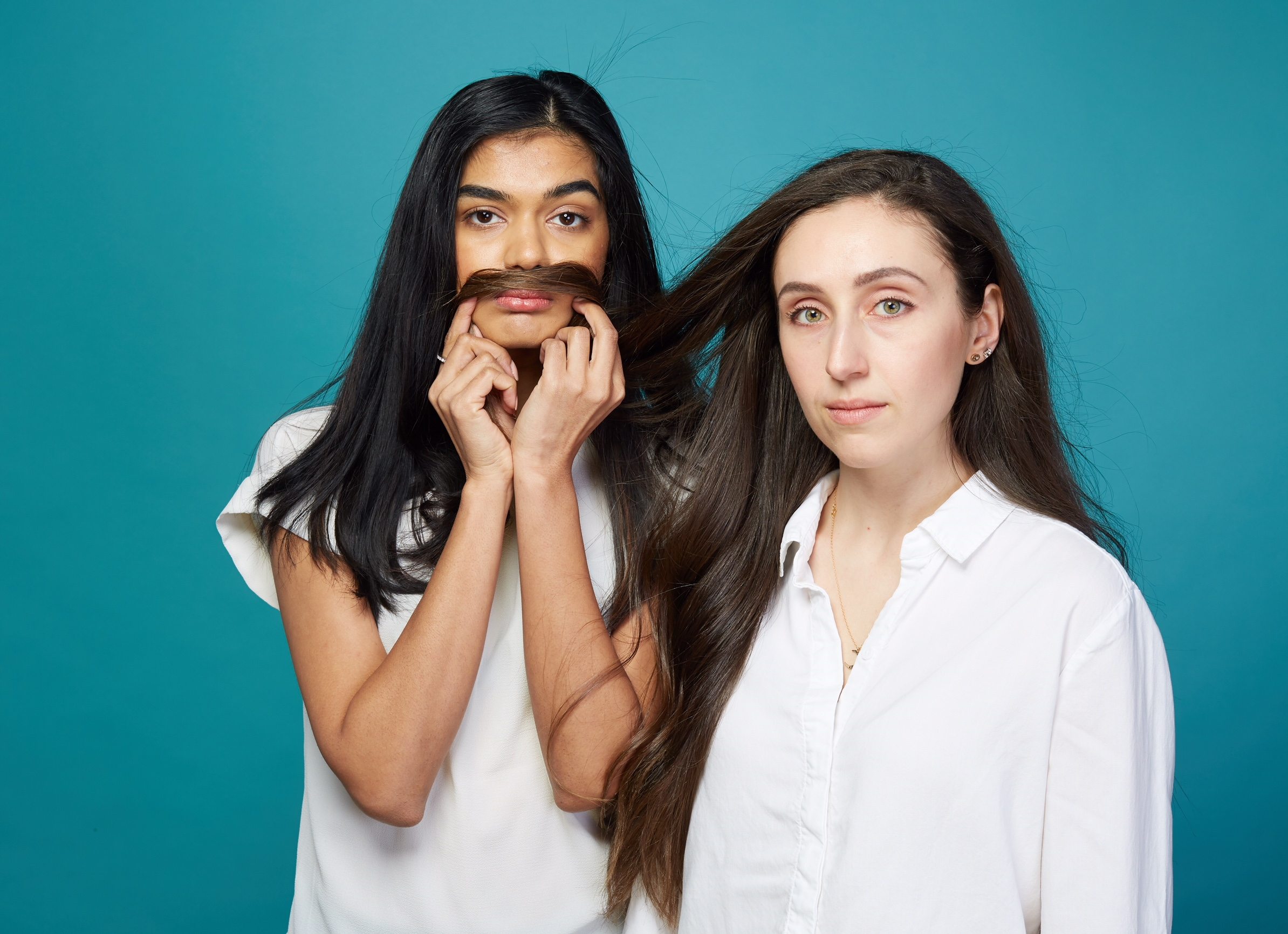 “I direct my subjects a lot, but it’s the moments in between, when they are getting into position, that I capture,” says Dolan. Joelle and Amanda met in residence at university. Amanda had a whole whack of allergies, and Joella made it her mission to make sure they didn’t stop her from participating in events and nights out. Ten years later, they formed a lifestyle site together called Everyday Allergen-Free, which helps educate teens with food allergies. 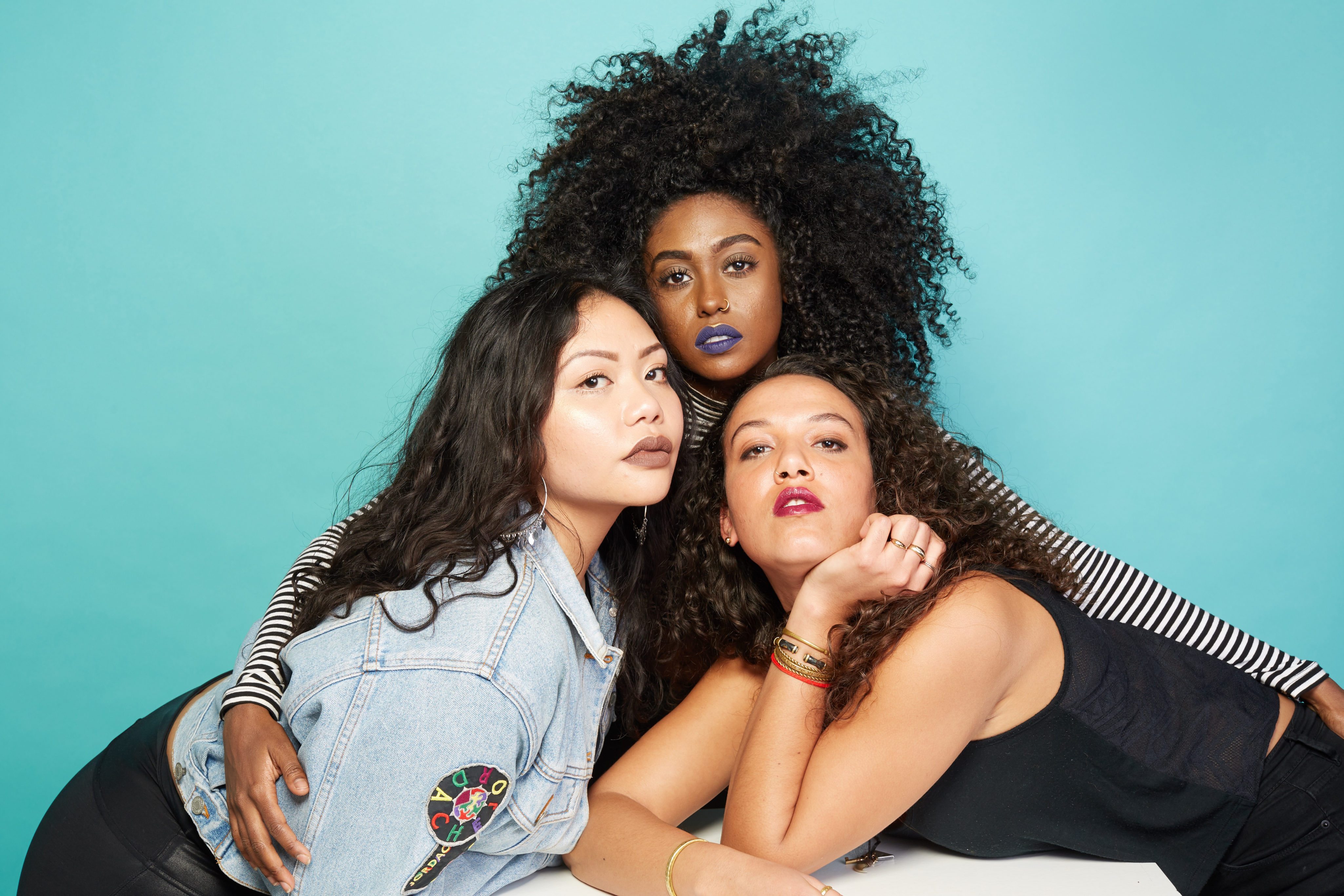 These three friends introduced themselves as a “chosen family” at the photo shoot. Jenille (centre) met Nicole (left) through a cousin, and met Mezz in Bellevue Square Park, then introduced them at her birthday party. Since the first time they all hung out, they haven’t left each other’s sides. “They treat each other like sisters and have a strong sense of respect,” says Dolan. They got ready in the washroom of the studio together, coordinating their clothes and encouraging one another to try new shades of makeup. 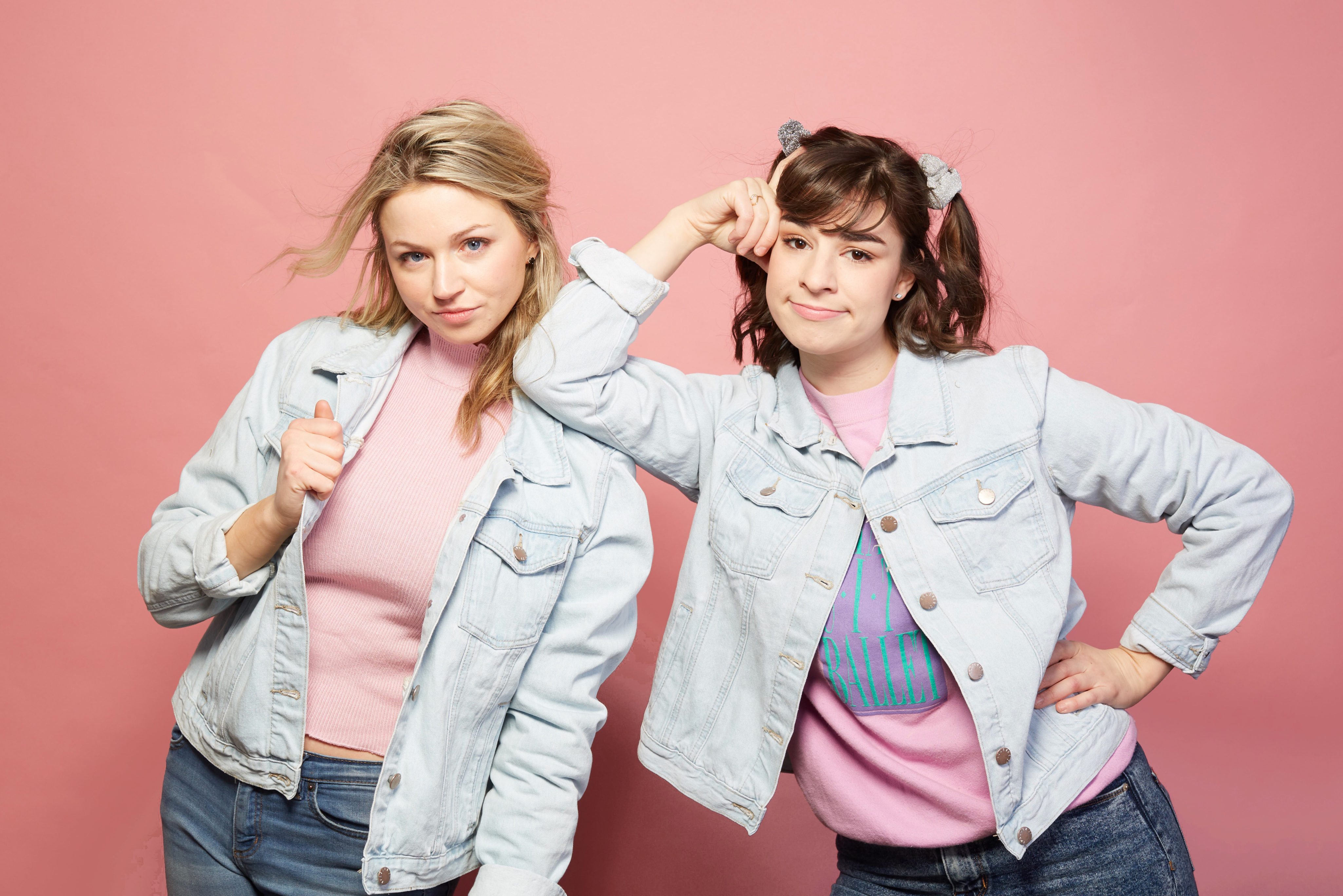 Sarah and Laura met while studying theatre at York University. A few years later, in their final year of school, they worked on a project together and have been best friends since. They now run a comedy web series together called Cool Girls, and they support each other on their career paths. “As emerging female creators in the comedy and film industry, it is so important they have each other’s backs.” 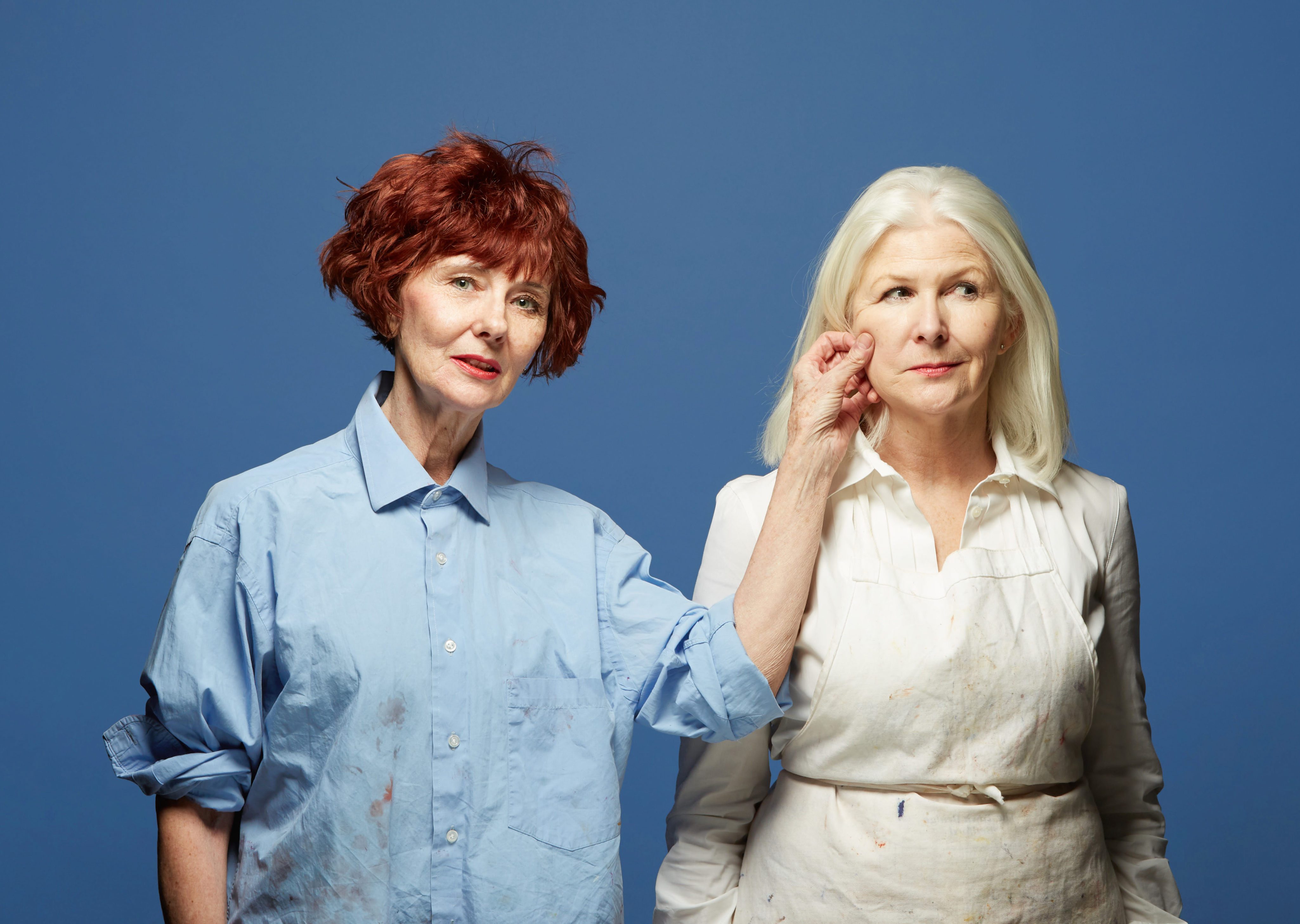 Lorraine and Win first met in high school art class in 1974. Forty years later, they reconnected at a Christmas party and picked right up where they started. At the shoot, they behaved like their childhood selves, goofily covering each other eyes, making gestures behind each other’s backs and playing with each other’s hair. 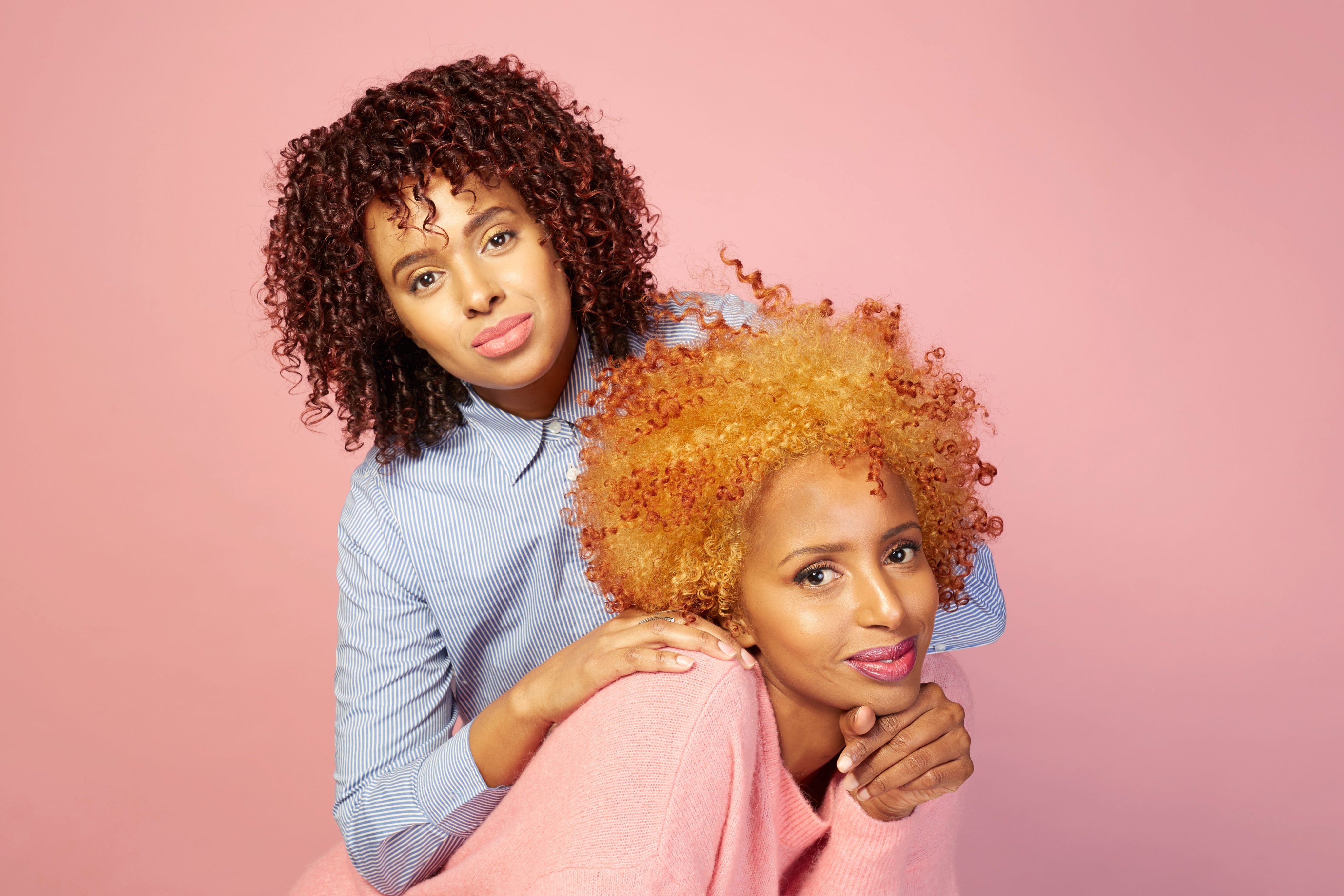 These two met on Ayat’s wedding day, when Deqa came as her cousin’s plus one. Now, people often mistake them for sisters, or even one another. Ayat’s neighbours often ask Deqa how her kids are doing, thinking she’s Ayat. “Their constant playfulness and teasing is something you’d usually only get from a family member.” 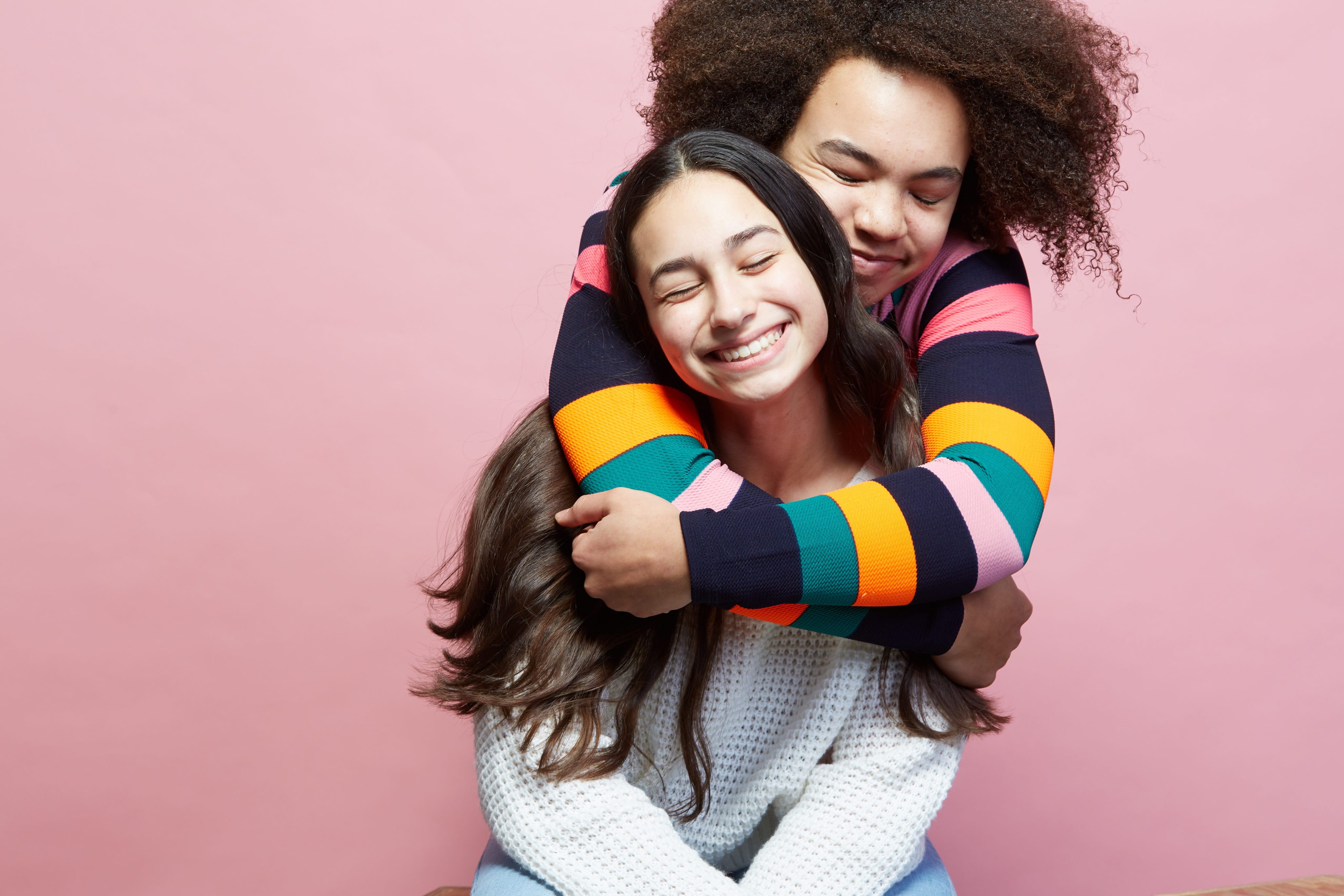 Lola and Annelle met when they were five years old during competitive gymnastics classes. They were lucky to have each other, since they didn’t have much time to make friends outside of practice. When they were nine, Lola suffered a bad back injury and couldn’t compete anymore, so they lost touch. Five years later, Lola transferred to a French immersion school and got a surprise reunion: Annelle was her new classmate. 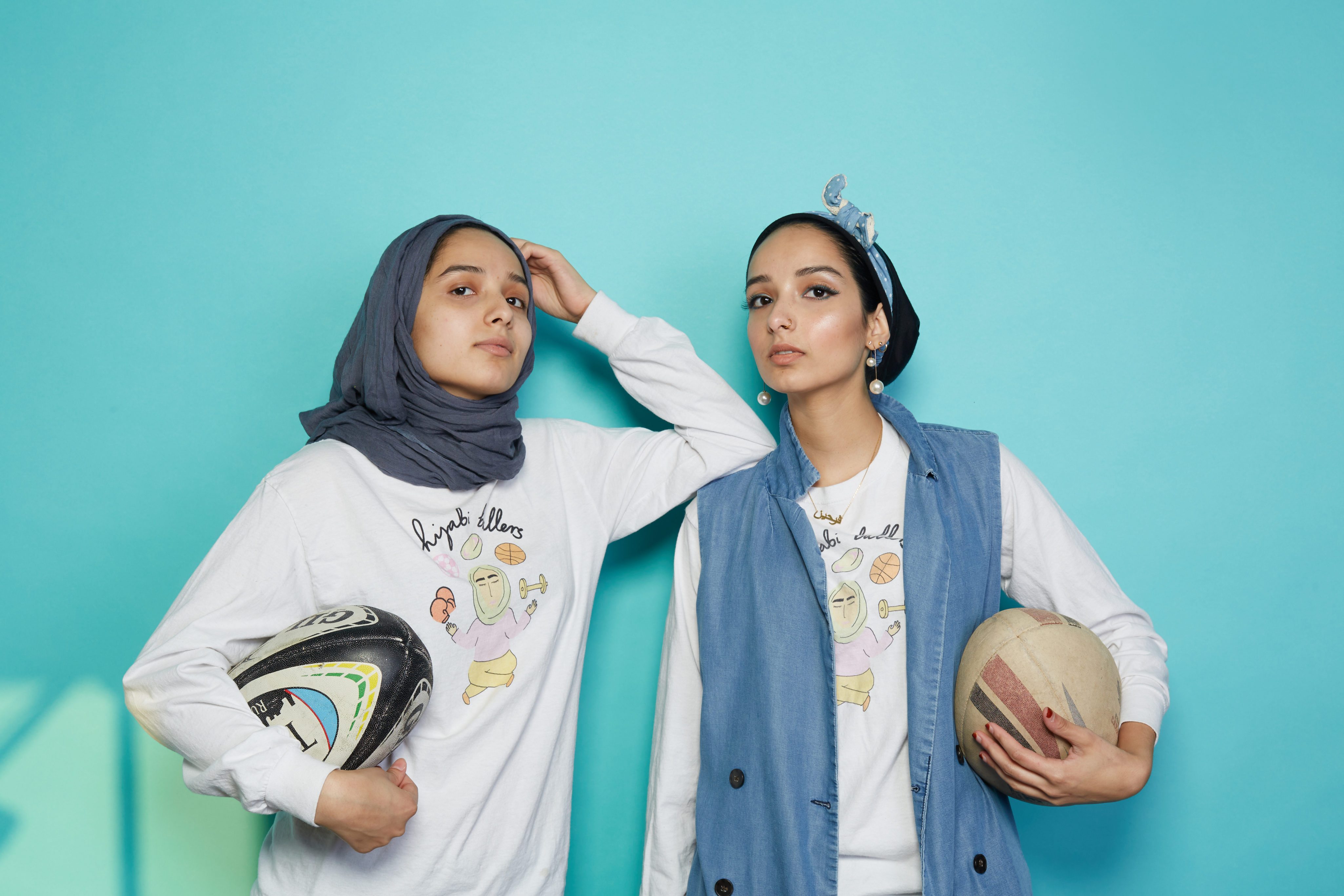 Amreen and Farheen are sisters and best friends. “There is a special relationship between sisters—you can get away with things you couldn’t with friends,” she says. Both athletes, they created the Hijabi Ballers to encourage and empower young female Muslim athletes to pursue sports. They’ve worked with about 500 women to date. 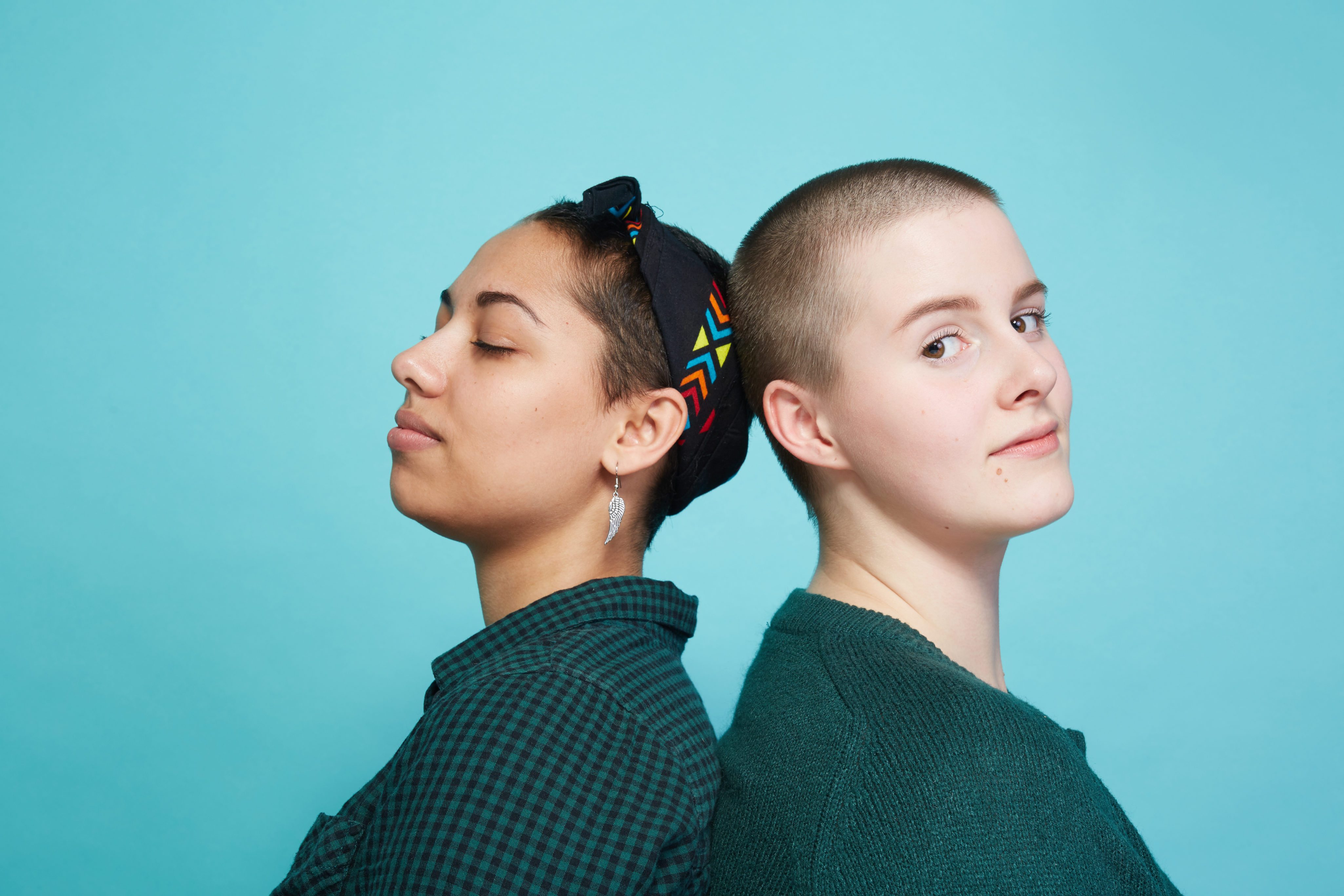 For their last six months of theatre school, Maïna and Ze fantasized about shaving their heads. One day, after graduation, Ze did it, and two days later, Maïna followed suit, filming the whole thing. They sat on the roof together, realizing they’d never felt the wind on their heads before. 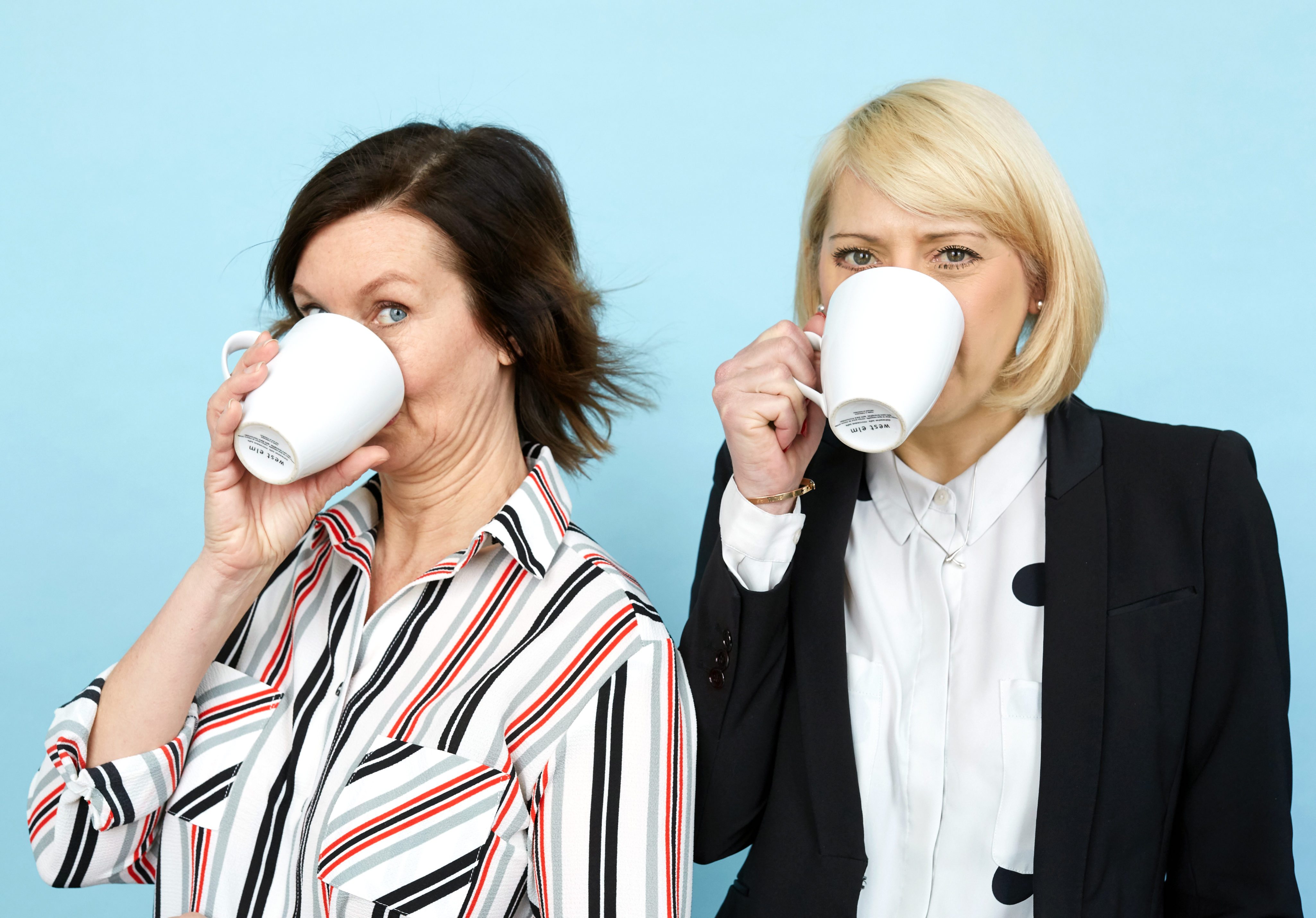 This photo was taken the morning after the daylight savings time change, so Rebecca and Joanna needed their coffee. When Dolan noticed they were drinking from their mugs at the same time on set, she got their attention and took the shot. Rebecca and Joanna met each other through their jobs in the energy industry, and founded WiRE: Women in Renewable Energy to encourage women to work in the sector. “They are super-confident business ladies, but on set they brought out a really fun side of their friendship,” says Dolan. 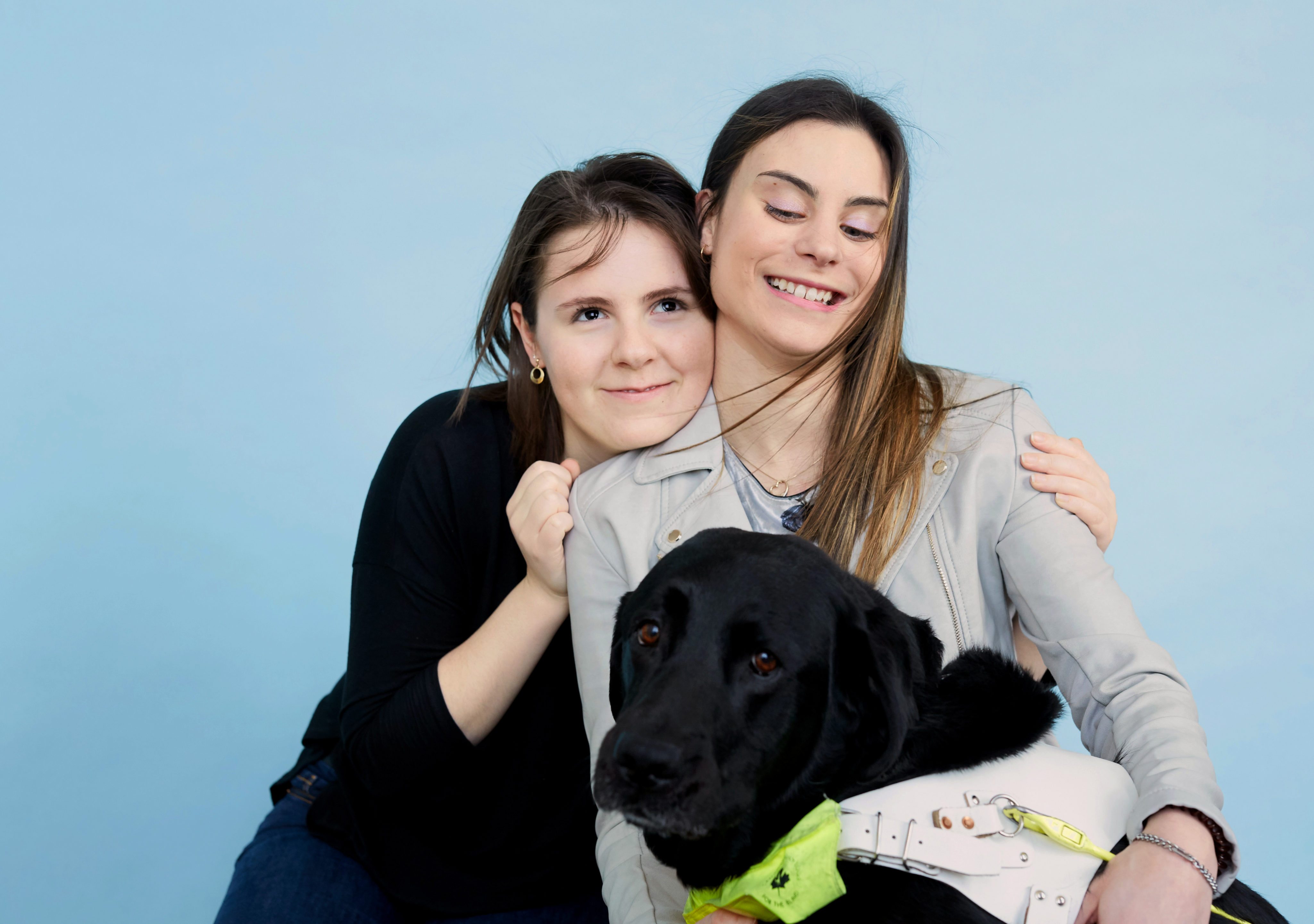 Dayna and Danika (and Ullie)

Dayna and Danika met through the CNIB National Youth Council, a group that advocates for youth with sight loss. “We talk on the phone weekly, usually on our commutes home,” says Danika, pictured here with her guide dog, Ullie, whom Dayna adores. “That sometimes includes loud car horns in the background as Dayna walks home, and I jokingly ask her if she is still alive.”

An earlier version of this post contained the incorrect photo for Lola and Annelle.