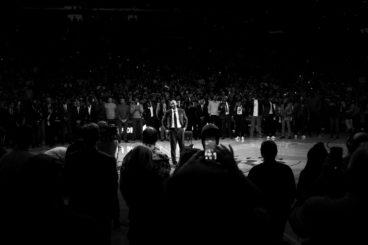 Ten amazing pictures by Jamal Burger, the Toronto photographer who shot DeMar DeRozan for the cover of Slam magazine

In 2014, Jamal Burger was a third-year kinesiology student at U of T St. George with plans to become a sports doctor. When he started posting some of his smartphone photos on Instagram, his friends suggested he buy a proper camera, so he sold a chunk of his sneaker collection to purchase a small Fuji.

Eighteen months later, when Burger’s best friend offered him his first paid photography assignment, a Nike shoot in Cleveland, he broke down in tears. “I was so happy. It was an opportunity to work in sport with a camera, which was just a hobby I had,” says Burger. He quit his day job, shining shoes for businessmen at Holt Renfrew. “I didn’t want to go back to work. I decided I was going to chase this. The worst that could happen would be I’d be broke at home with my mom.”

Eager to upgrade his gear, Burger struck a deal with the owner of Livestock, the Vancouver shoe boutique: he’d shoot product for them at no cost for a year if the company bought him a $6,000 Canon 5D Mark III and lens. “Asking for that camera was kinda scary, but he messaged me back and said, ‘Yeah, I’m down,’” says Burger. “It made me believe in myself.”

Today, Burger is better known in the photography world as Jayscale, a 24-year-old rising star who posts distinctive black-and-white photos for 193,000-plus Instagram fans. “Colour is definitive of time,” Burger says. “I’m trying to make something like the photos that inspired me: whether you look at it today or 30 years from now, it still has the same impact. It still resonates the same way.” He specializes in shooting basketball, often with amazing access to NBA players—he and his two best friends shot DeMar DeRozan for the most recent cover of Slam magazine. Here, Burger shares the stories behind 10 of his photos. 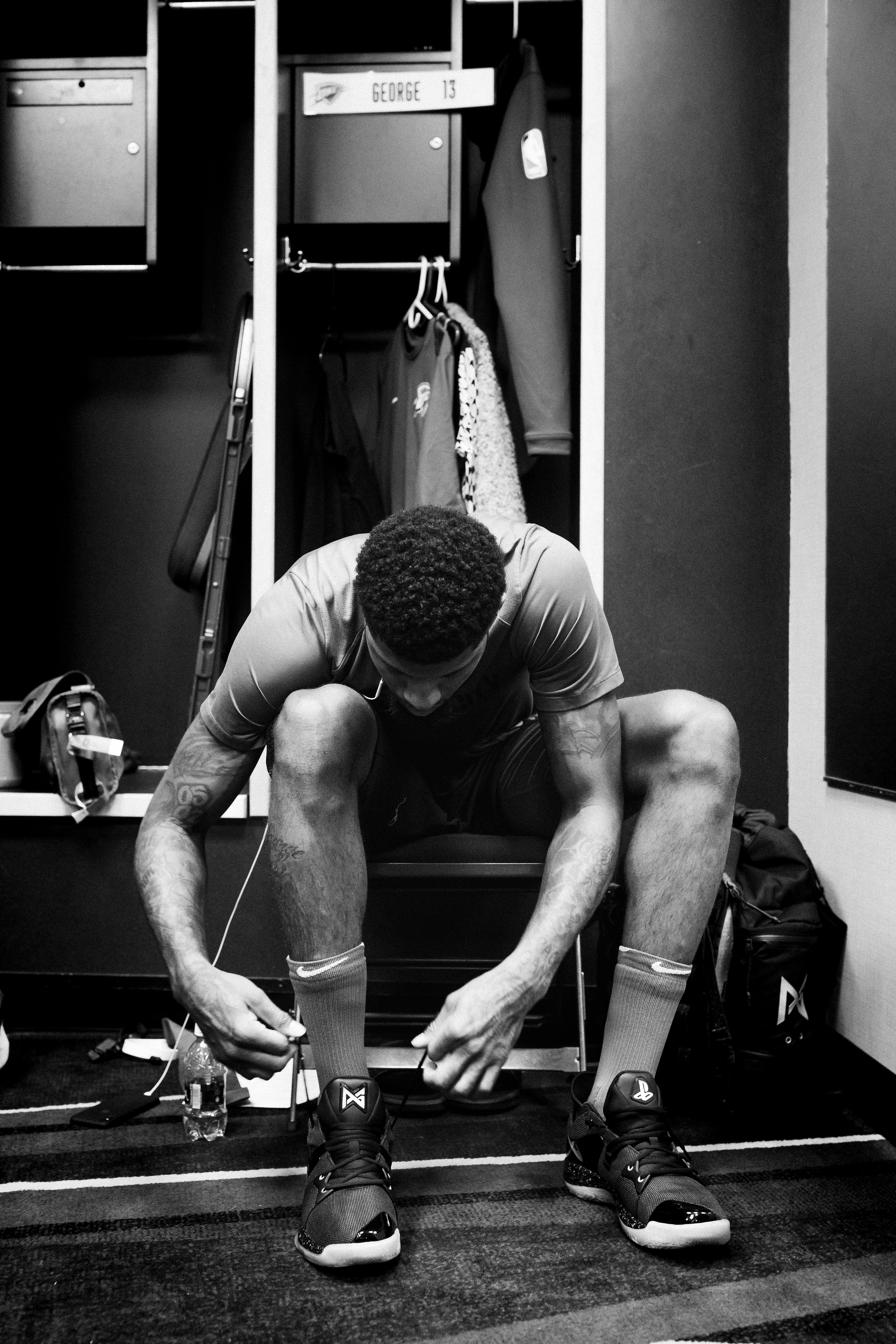 “Before anything, I knew I loved sports. I wanted to work in it. I watched every Raptors game and I loved playing basketball, but I knew early on I wouldn’t make the NBA. I thought about getting into sport media or being a sport doctor. I tried making clothes, selling product and a bunch of random things [before my photography took off]. I took these when my friend and I were assigned to document Paul George’s sneaker collaboration with PlayStation. We went to Phoenix to take an initial round of photos and then shot this one the day he wore them in-game against the Cleveland Cavaliers.” 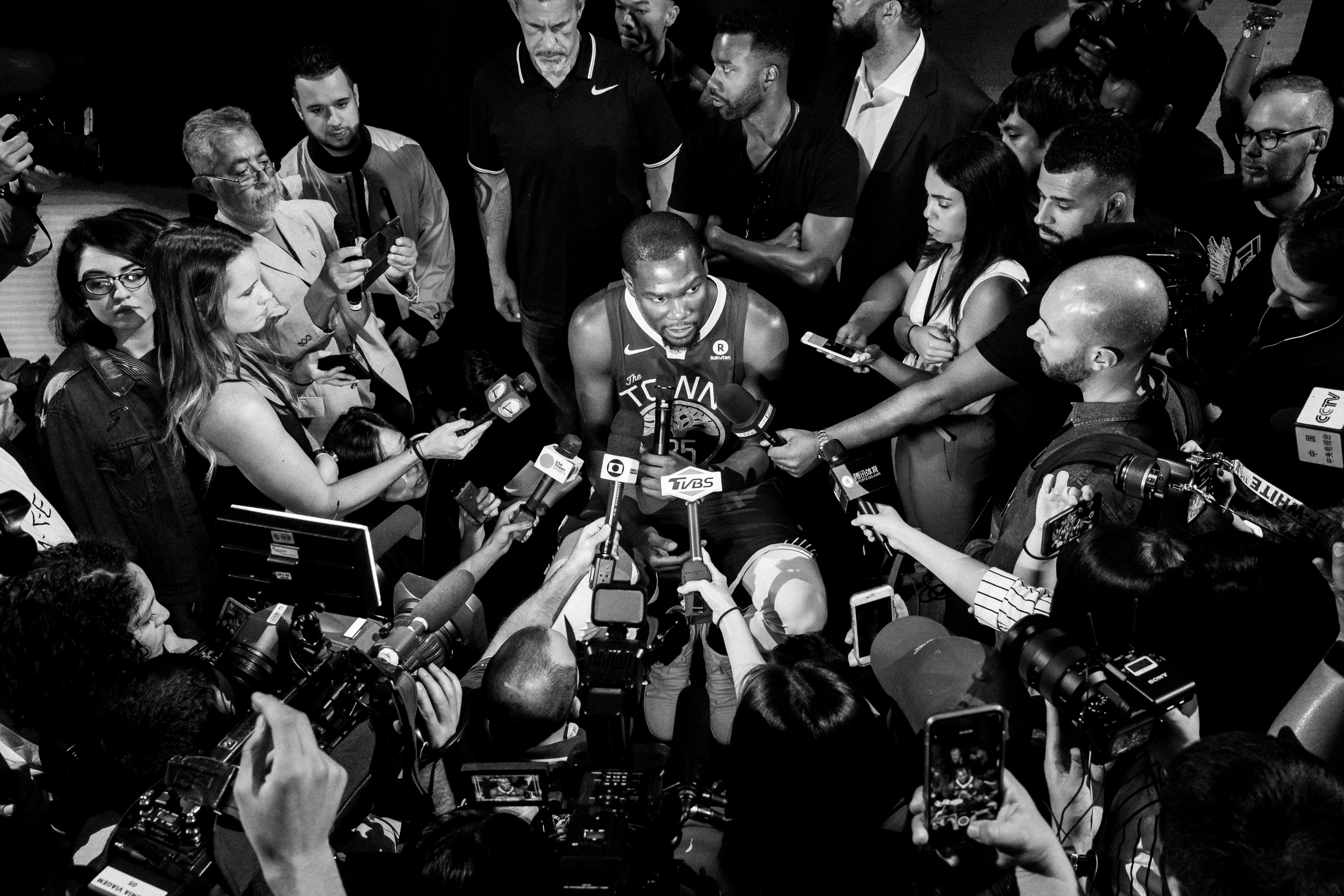 “Nike asked me to go to their NBA jersey launch in Los Angeles this past September. When everyone was trying to talk to Kevin Durant, I jumped up on a stool and starting taking pictures. It was over pretty quickly, but I was super stoked about this picture. It’s one of my favourites I’ve taken. It reminds me of old NBA photos I’ve seen in the past.” 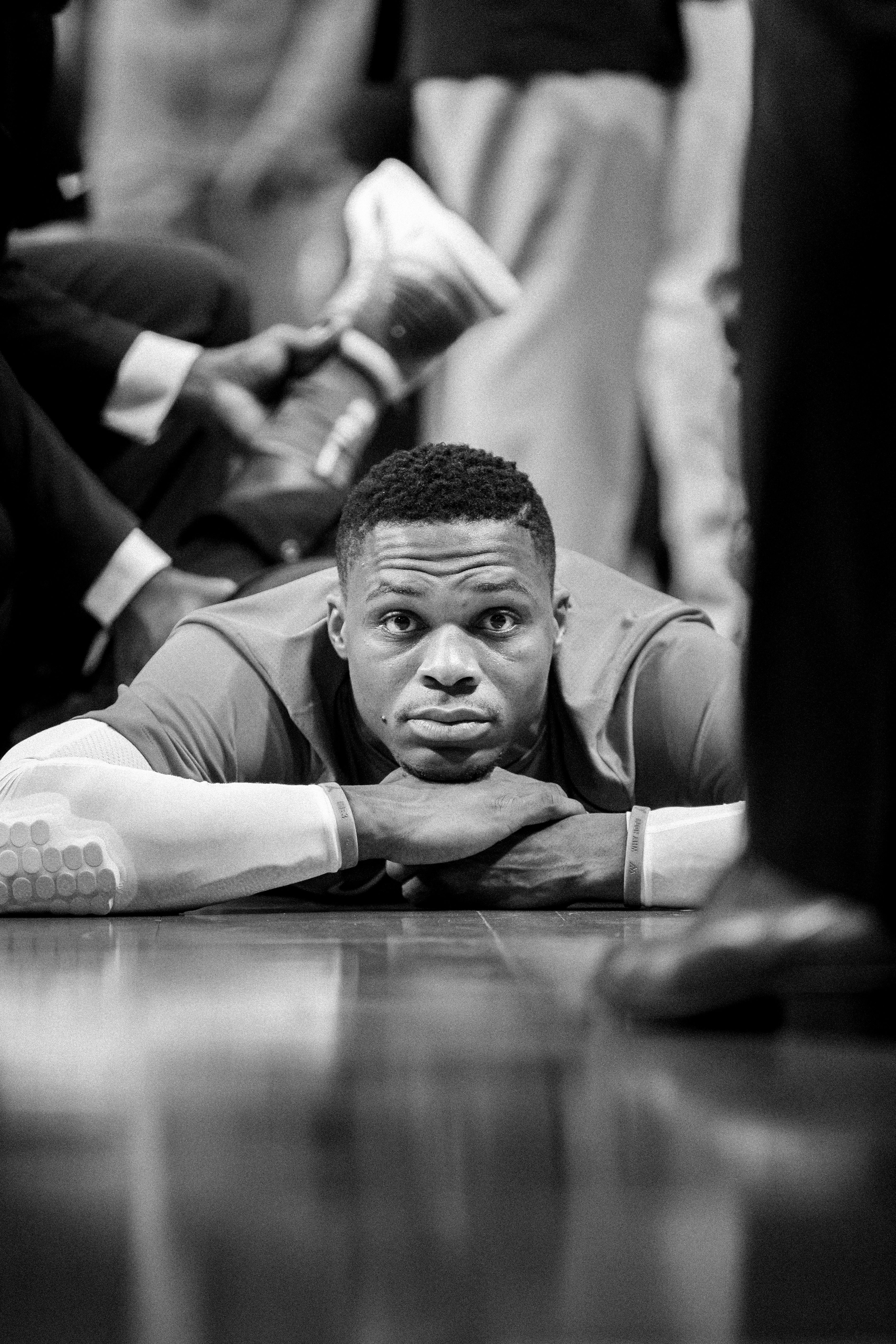 “I was shooting for Jordan brand at the Oklahoma City home opener. Russell Westbrook was going through his regular stretch—he literally does the same routine for every game. I was around the corner from him, and I started snapping. He noticed me and started looking at me, and I got this shot.” 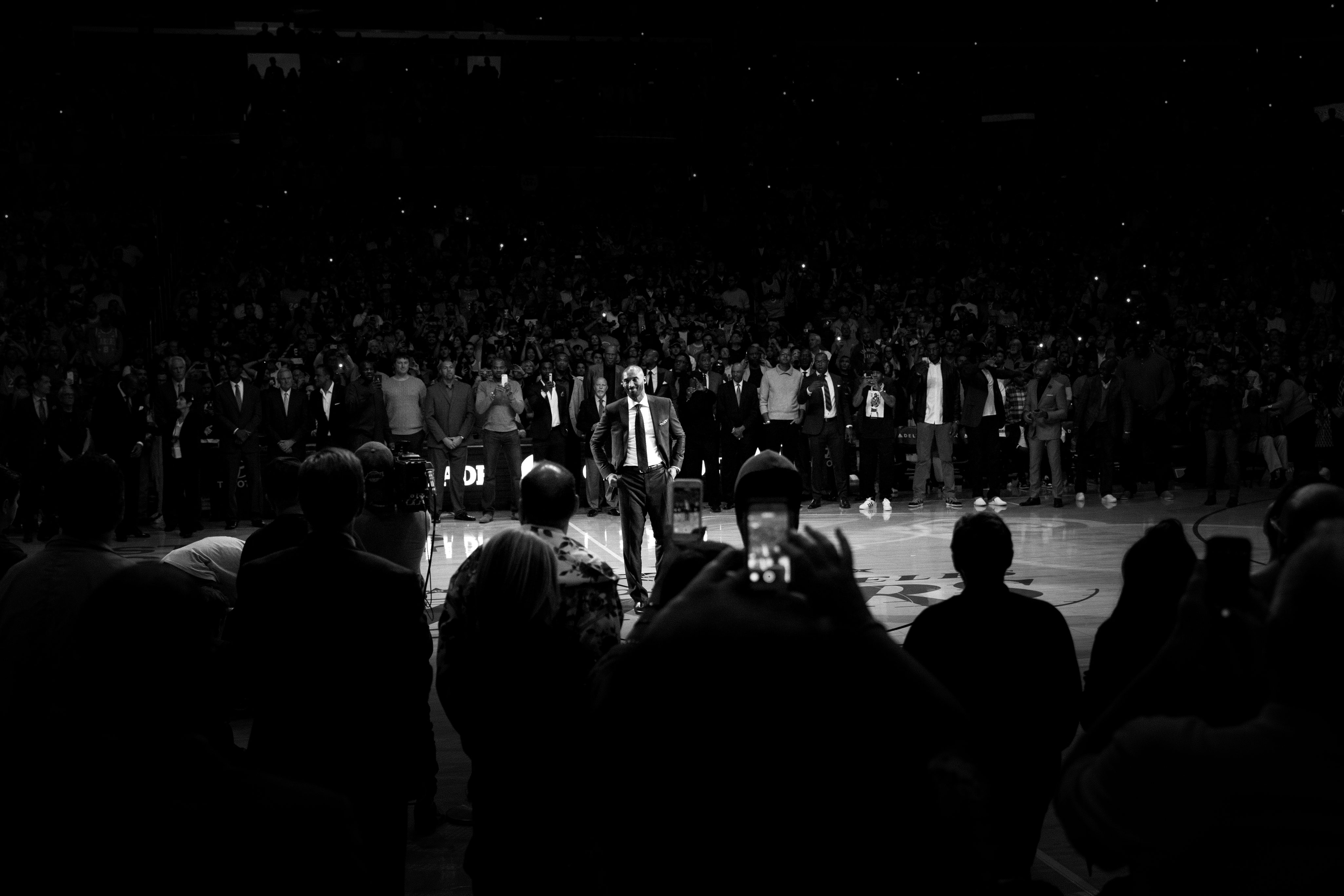 “I got the opportunity to shoot Kobe Bryant’s retirement through Slam magazine. He is a living, breathing example of what greatness looks like. He spoke about how he takes a day-to-day approach to life—how can I make this day better?—instead of trying to macro-manage life. That really stuck with me, because I’m always trying to plan ahead.” 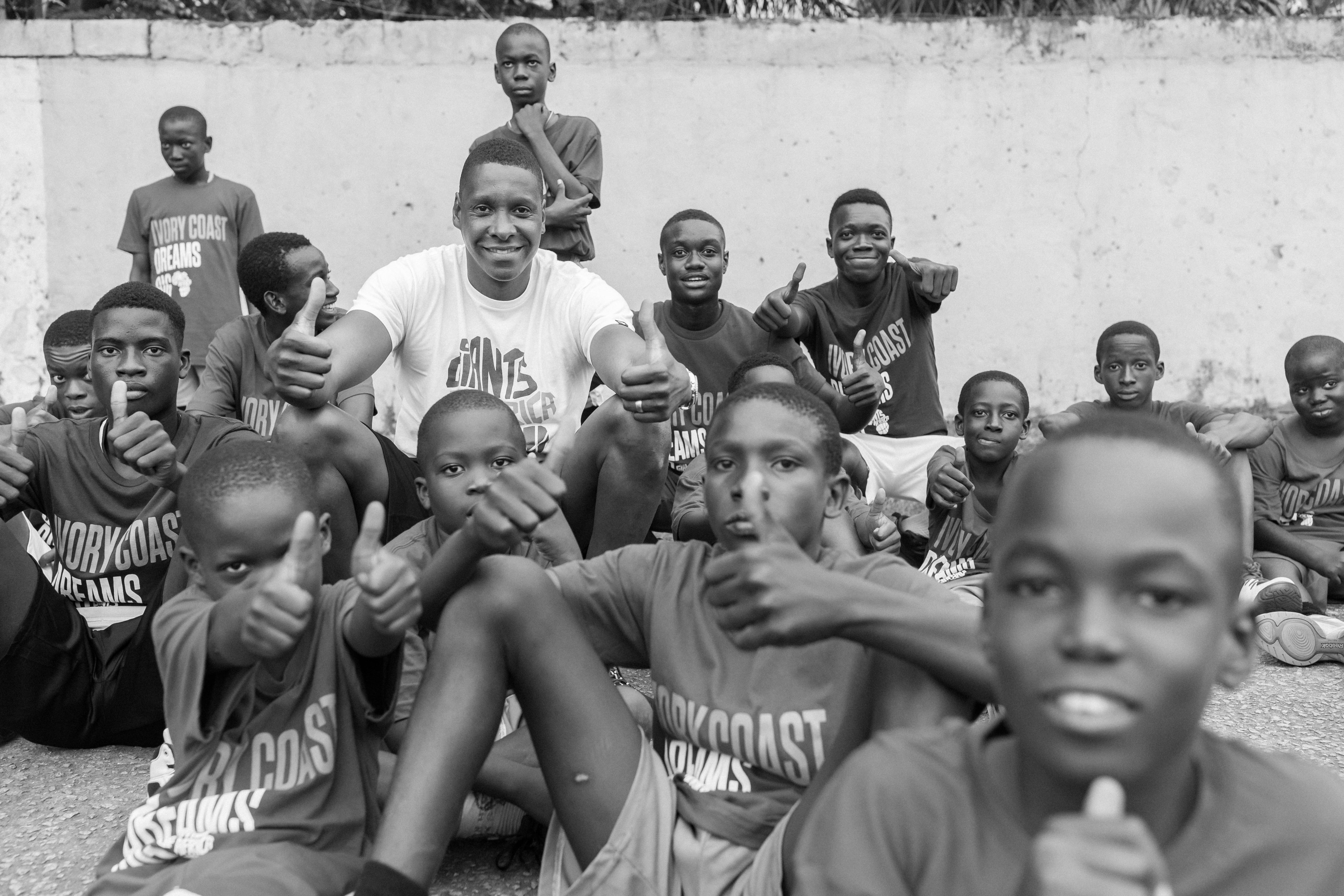 “Last year, I spent a month at Giants of Africa, Masai Ujiri’s basketball camp. Through basketball, he inspires the young men and women of Africa to really dream big, to push themselves to be as great as they can be. I really like this photo because it captures Masai and the kids and how comfortable they are around him. It encompasses what I believe in, what matters to me.” 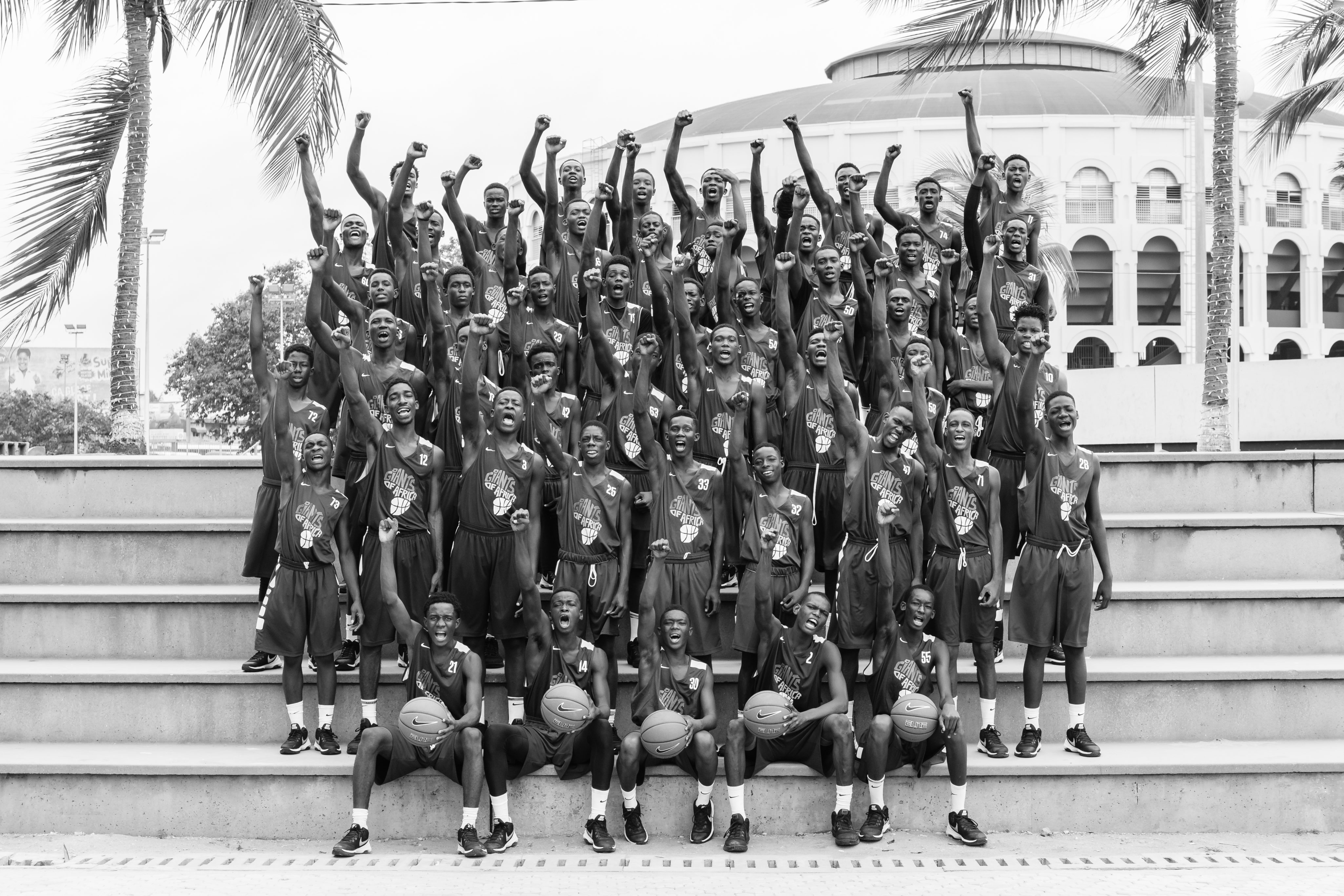 “The raised fist is a Giants of Africa staple. That’s them showing their pride in their country, their city, their community. I learned so much from Masai about dedication, about commitment to what you believe in and about being the change you want to see. Also, it was inspiring to see NBA players sacrifice their off-season to make the world a better place—they work so hard the whole year and barely see their families, yet when they do have time off, they try to change the world. I came back from that experience inspired to be greater than I’ve been before.” 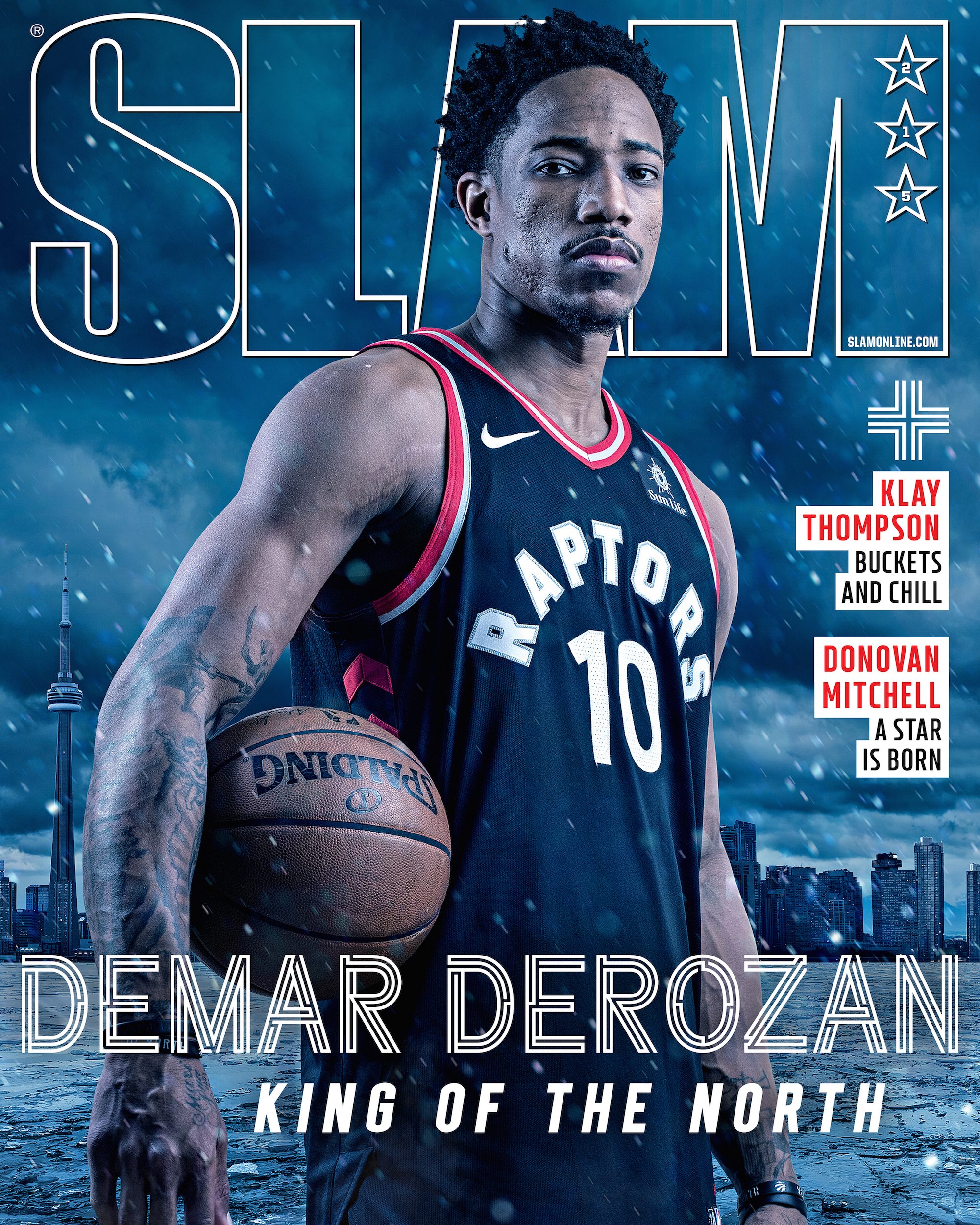 “My friends and I have worked with DeMar a few times. He’s always been polite and down to earth, easy to get along with and honest. It’s always been a positive experience, and it was cool this time around because we have the familiarity of shooting together. If you told the 12-year-old me that my best friends and I would shoot the cover of Slam, I never would have believed you. I use this as proof when I tell kids that anything is possible, that there are lots of ways to become successful. You can go to school to go to another school to end up with a bunch of debt and work in a place you don’t want to be. Or you can do whatever you want if you put your mind to it and invest in yourself.” 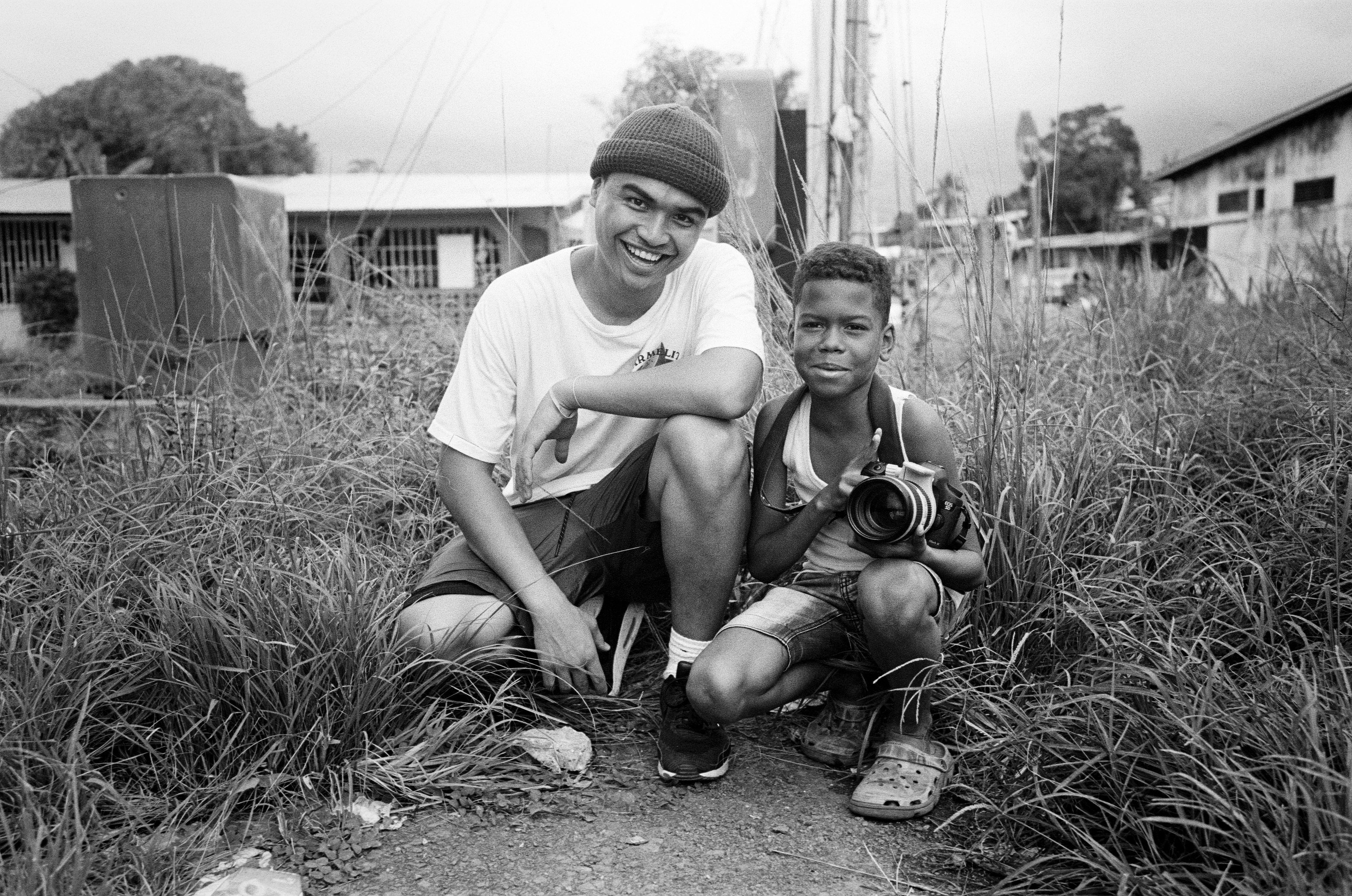 “That’s Due Pinlac. He is my best friend, mentor and business partner. He put all the initial opportunities in front of me. Without him, I would not be here. We went to La Chorrera, Panama, in December with this initiative I created with my friends called The Kick Back, which uses footwear as a vehicle to enable change socially, culturally and physically. Through GoFundMe, we got 150 pairs of sneakers, and we brought school supplies and uniforms. We set up a basketball tournament, we played soccer and we talked with the kids. It was super fun, super rewarding.” 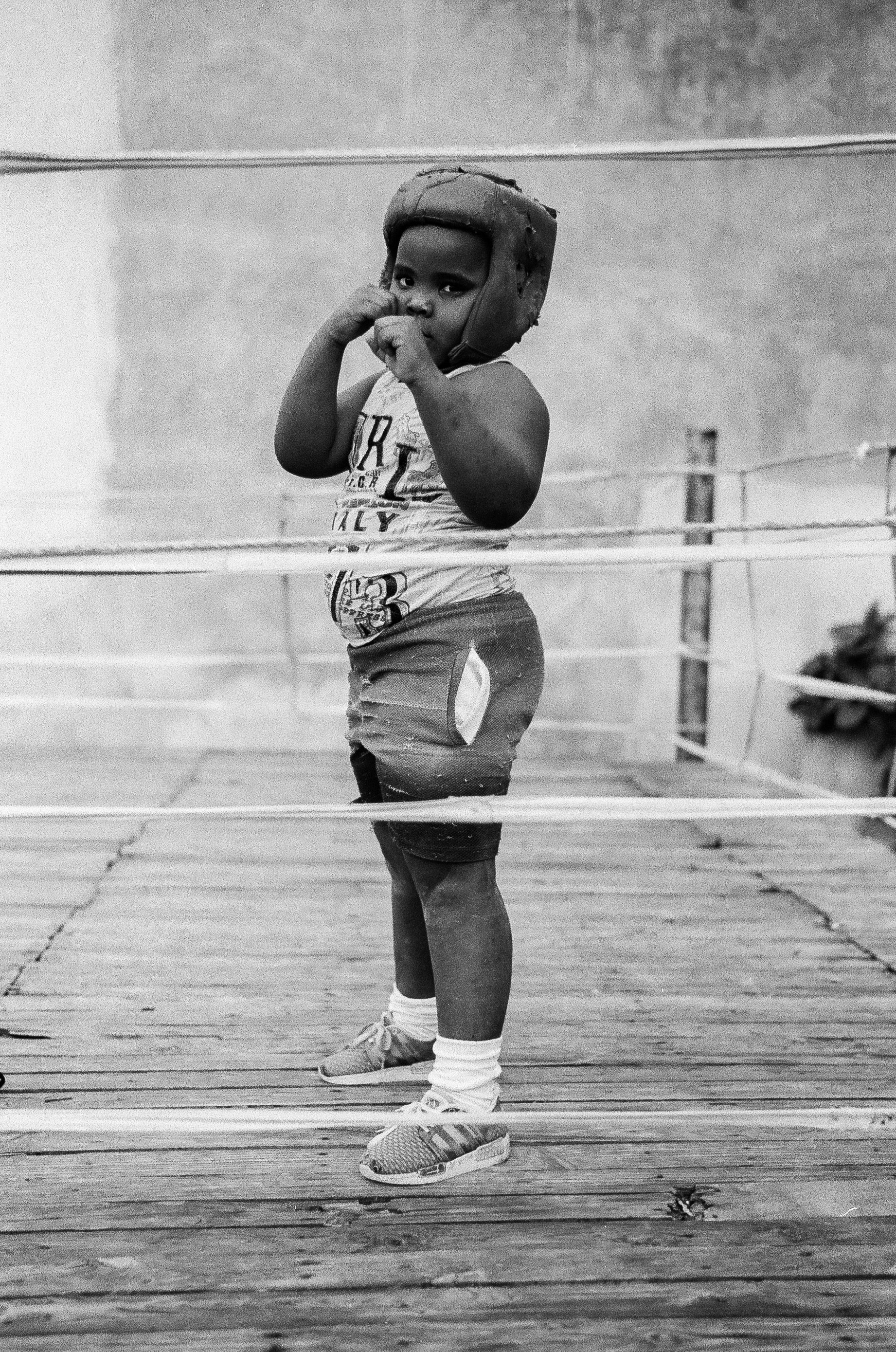 “Cuba is one of my favourite places in the world. It’s where I go to disconnect. There’s very limited Internet there. It’s one of the few places that reminds me of the first black-and-white photos I fell in love with, like the work of Jason M. Peterson. Now, people are on their phones, cars look different. It doesn’t look like the old days. Cuba still looks like it did in the 1970s and ’80s. I was roaming Old Havana and popped up on a gym I hadn’t seen in past travels. So I went in, met the owner and talked to the kids. I took this picture because I wanted to remember him and have his picture for future reference in case we go back and do a shoe drive. I wanted to be able to provide context on where the shoes will go once that time comes—which it will.” 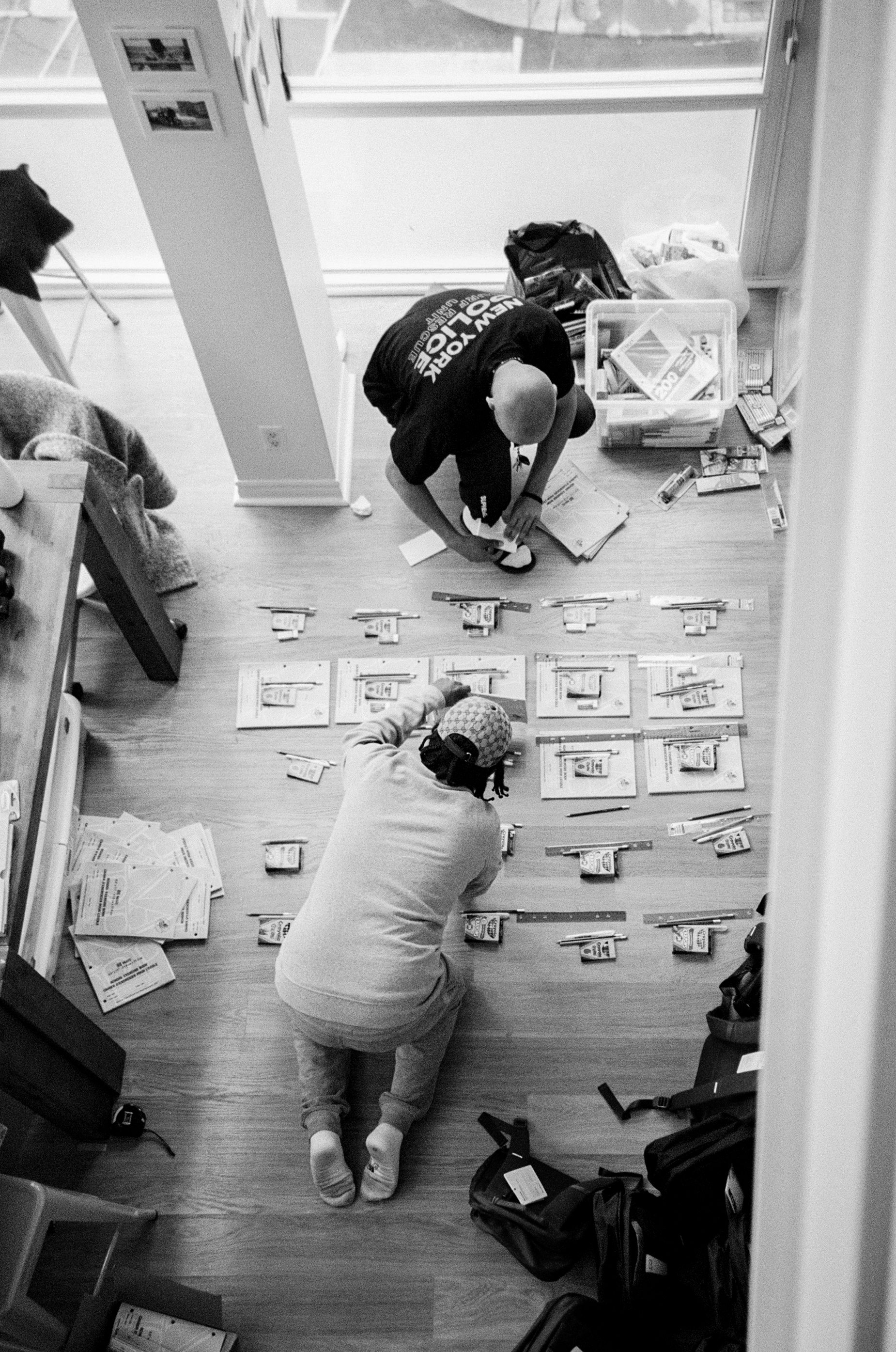 “Growing up, a local non-profit called Pathways to Education provided me with bus tickets, tutoring and mentorship. My mentor, Jermyn, was my male role model growing up. So when Incase, one my long-term partners, offered me product, I said, ‘Instead of giving me all this product, how about we give it to the kids?’ In this photo, we’re setting up the supplies. I think of the supplies as symbols of the life skills and messages we’re trying to get across. The eraser is to say it’s okay to make mistakes. The crayons are to remind them to stay creative. The notebooks had personal questions in them to get the kids thinking about what they want to accomplish in life.”