“When I return to work, I won’t be able to touch my family for a long time”: This ER doctor became a new dad in the middle of the pandemic

“When I return to work, I won’t be able to touch my family for a long time”: This ER doctor became a new dad in the middle of the pandemic 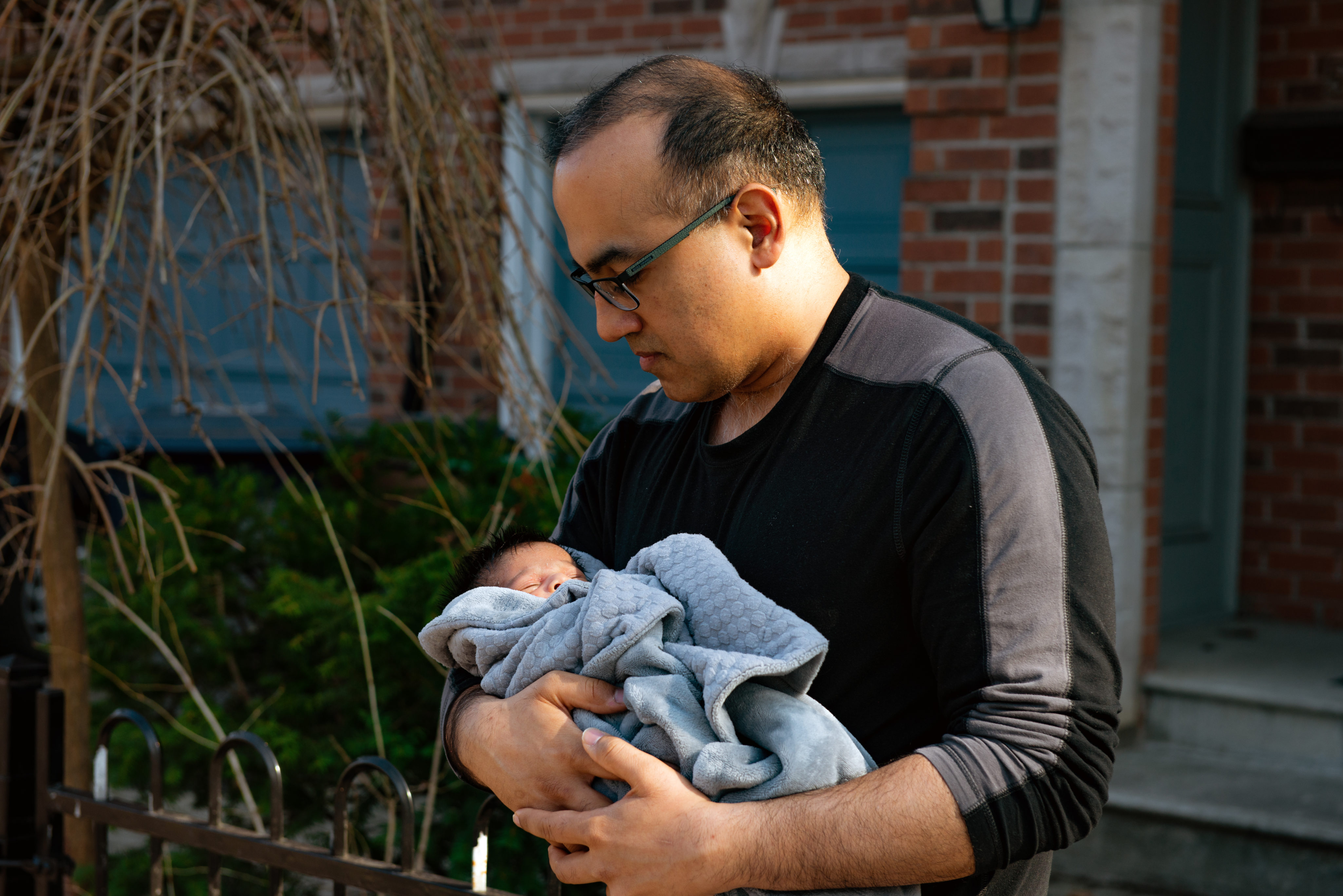 I’ve been an ER doctor for 12 years, and I currently work at a large community hospital in the GTA. But I didn’t learn how serious the Covid-19 threat was from my hospital, or from the media. I found out from medical Twitter. In late December and early January, we started hearing that there was a new virus in China. But it didn’t become real to us until the pandemic spread to Italy. It was extraordinary how Italian doctors started spreading their message on social media, getting on YouTube, posting on Twitter, describing the sheer horror of dealing with surging cases. Among the scariest was a pair of recorded WhatsApp voicemails from two doctors talking about how their hospitals had run out of equipment, and how devious the virus is. The hospital where I work and the authorities have been one to two weeks behind, so if it wasn’t for the Italian doctors on Twitter, I wouldn’t have known what was bearing down on us.

To make matters worse, my wife was scheduled to give birth to our second child in March. (She’s a private person and asked that I not name her in this story.) I started expressing my concerns to her in January. She didn’t believe me at first. She was still with the general public: it was hard to imagine anything serious happening. As her due date approached, I showed her some social media accounts from Italy, and she started to get nervous. On March 12, the day before her scheduled C-section, everything changed. Ontario closed the schools. Disneyland shuttered and Broadway went dark. All three major sports leagues cancelled their seasons. And the next day, we were going to deliver our son into the world, putting our lives in the hospital’s hands.

My wife was being encouraged by her ob-gyn to try a natural birth, but as the coronavirus closed in, we  decided we couldn’t wait. A natural birth might come days or a week after our planned C-section, and we didn’t know what might be lying in wait on a button in the elevator, or on her armchair in the waiting room. We decided to get our family in and out of the hospital as fast as we could. We felt like we were living in one of those disaster movies, where a meteor is coming. You don’t know when or where it will strike, or how it will affect you. But you know it’s coming. Even some of my colleagues would say, “You know, this could never really happen to us. We went through SARS—we’re prepared for this.” But Italy was prepared, and they’re on fire.

On Friday the 13th, we drove to the hospital at 6 a.m. The city was deserted, far more than it usually is. Everyone was gone—it was like a zombie movie. When we arrived at the hospital, you could see they were making preparations for social distancing. They had started spacing out chairs in the lobby. Hand sanitizer started appearing everywhere. But in the food court, people—health care workers, hospital visitors and civilians—were laughing and joking, clustered around each other. Elderly people, who are most at risk, were sitting in groups. Did these folks have any idea what’s coming?

When we arrived on the maternity floor, everything looked pretty much the same as it always does.  There was another couple waiting there, so we kept our distance, and we remained standing in case the virus was lingering on the chairs. Our parents and grandparents came from India and Pakistan—for the first time, I was beginning to understand the uncertainty they lived through. Then we met our excellent team. You could tell by the way they interacted that they were well-practised, in lock-step. It was incredibly reassuring. They were like an orchestra.

I sat behind the operating curtain, so I couldn’t see what was happening. And then suddenly I heard my son’s voice. It was extraordinary. When they lifted him over the curtain, I saw his face for the first time—and he looked pretty pissed, actually. He had this frown on his face when he was born, all his wrinkles furled up. He looked angry at us for taking him out of a nice situation. He was small—six pounds, six ounces. The first thing I said to him was, “You know, kiddo, we had to get you out of there. I’m sorry we brought you out. I’m sorry you’re pissed. But you’ll like life on the outside.”

They wrapped him up in swaddle, like a little bun, and gave him to me. I carried him back to my wife. Because of Covid-19, we were socially isolating as much as we could, and hunkered down in our little hospital room over the weekend. I Lysol-wiped every surface in the room. When food services delivered our meals, I wiped down every inch of every container. The world outside that little room scared me—sometimes I thought: Shit, we’re still in it. But then I’d look at my son, and he’d bring light in a dark time. On Saturday, we named our son: Rayaan. In Urdu and Persian, it means “door to heaven.”

We were discharged on Sunday. We didn’t bring the stroller to the hospital, because we didn’t want to have to disinfect it and potentially miss something, so we just carried him out in our arms. Now we are at home together, and we’ll stay here for at least a month. The last few days have been unreal. My mother-in-law is locked down with us, but my parents, who live in Richmond Hill, can’t visit. They had to meet their newest grandson over Zoom. It’s hard for them. At the same time, our grocer of over 30 years, Mubarak Popat, who had a store in Little India, became the first Torontonian to die of Covid-19, on March 21, just a few days after Rayaan was born. This was a man we grew up with. His tragedy made my parents understand how serious a foe we’re facing.

In a month, I go back to work in the emergency room. As long as the masks and personal protective equipment hold out so that health care workers don’t get sick, we’ll get through this, especially if we can get industry on board. But I have to worry about protecting my family. Covid-19 is not nice to children less than a year old, and I’m going to do everything I can to make sure Rayaan is not exposed to it. I have a routine planned. I’ll go into the hospital with my ID badge, a pen and the key to my car. I’ll change into my scrubs. Then I’ll put a surgical mask on, and wear the same mask through my entire shift. I’ll wash my hands before and after every patient, before and after touching anything. I’ll treat every surface as if it’s contaminated. I’ll sterilize my workspace—the keyboards and the screens and the counters. Many of us have stopped eating at work, or even drinking coffee. A droplet could land on your coffee mug, then you’re done. When I’m finished my shift, I’ll wash my hands and arms again, up to my sleeve. I’ll change back into my clothes, go back to the car, wipe down my ID badge, my pen and my car key with bleach wipes, then go home. In the garage, I’ll change out of those clothes, put them in a bag, bleach wipe my key again, then take a shower.

Even those precautions aren’t enough for me. In a month, when I go back to the ER, I’m going to live in the basement. It has its own bathroom and a separate door in the garage, where my wife will leave my food. And I won’t touch my family—no touching for I don’t know how long. My next shift is April 14. On April 13, I’m going to kiss and hug my family for the last time. And then I will go to work.