“We’ve spent 260 days together and haven’t had a disagreement”: When Covid hit, this long-distance couple found love in Toronto

“We’ve spent 260 days together and haven’t had a disagreement”: When Covid hit, this long-distance couple found love in Toronto 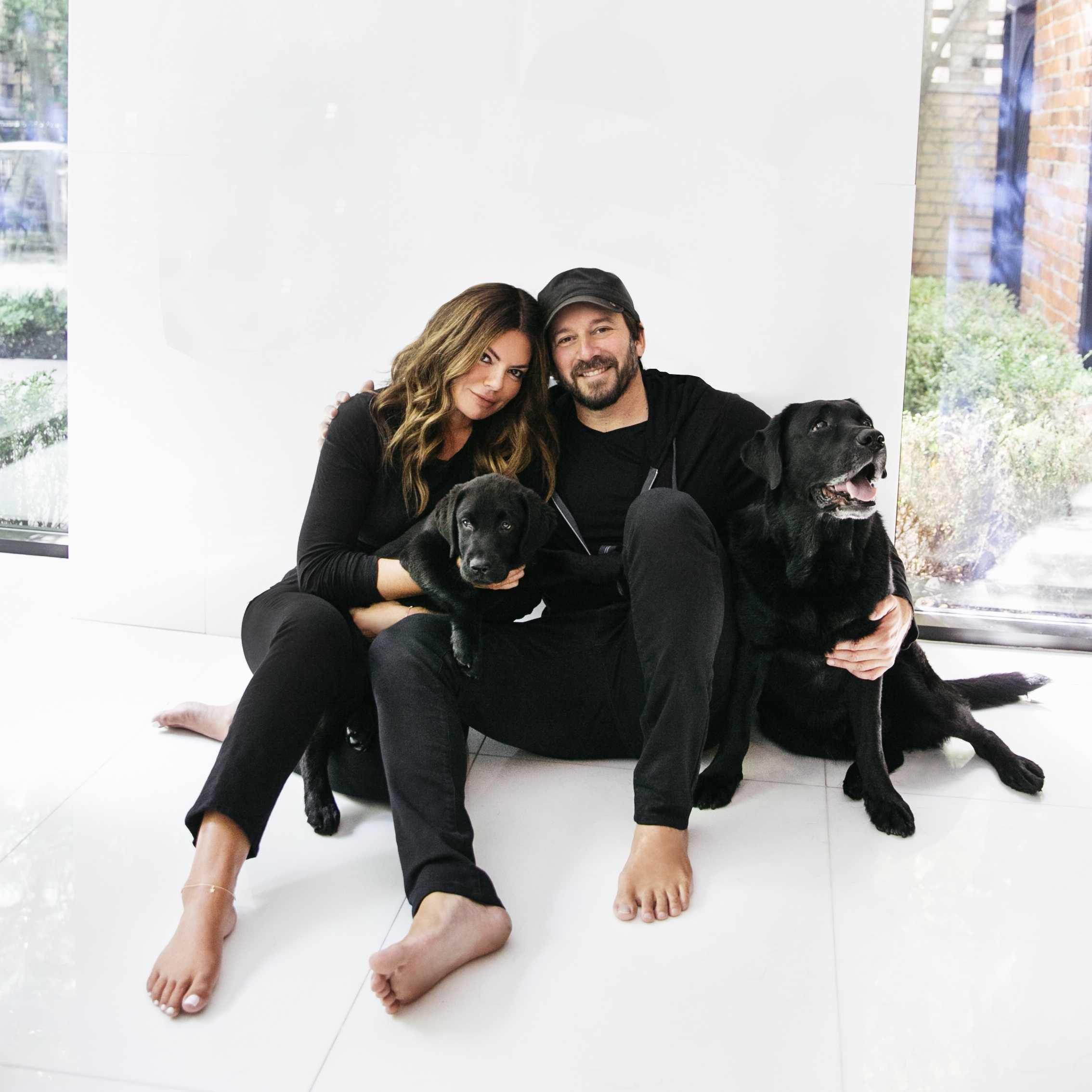 PR pro Natasha Koifman met the California-based journalist Eric Hendrikx on the dating app Raya at the end of 2019, and they quickly embarked on a long-distance romance. He was in Toronto when the pandemic hit—so they decided to move in together. Here’s how they made it work when the borders closed.

Natasha: When Eric and I met, we’d both recently gone through breakups, so we knew what we didn’t want in a relationship. I wanted to be with someone who had depth and who shared the same values. I’d never been on any of the apps before, but I liked the idea of getting to know somebody from the inside out. We both joined Raya—a dating app for entrepreneurs and creatives—on December 26. Once we matched, I woke up to a beautiful and intense message from him.

Eric: I was looking through Natasha’s pictures and saw one of her onstage doing a TED Talk. I watched the talk, in which she speaks about the challenges she faced as a young single mother. It seemed like we had parallel lives—I had also been a young, single father. So I sent her a message about how valuable and inspiring her TED Talk was. That was how the conversation started for the two of us.

Natasha: We messaged a bit for the next few days, and on New Year’s Eve, we got on the phone and ended up talking for eight hours. We rang in the new year while I was on the east coast; then, three hours later, we rang in the new year for him on the west coast. I felt like I’d known this person for a long time. I felt so connected to him.

Eric: We talked about everything: our families, our kids, our aspirations. We briefly talked about past relationships. That’s when I realized we were truly aligned. And then we talked about what we we wanted to do from that point onward. We talked about how we both wanted a ranch-style home in Southern California with backyard chickens and llamas (we’re still deciding about a goat). It was like we were at this universal crossroads, and we both happened to cross the street at the same time.

Natasha: I got off the phone feeling like, “This is definitely my human.” I woke up the next morning and sent him the song “Do Ya” by Neil Nathan. Soon after, he set up a Spotify playlist that we still listen to today. I think we have, like, 53 songs on our playlist now.

Eric: We knew we wanted to meet in person, so we checked our calendars and planned to get away for a few days in early January. We wanted to meet somewhere that wasn’t Toronto or California, so we settled on New York City.

Natasha: It was a bit nerve-racking because there was this huge buildup to meeting in person. We’d had movie dates and read books together over FaceTime, and we’d so many thoughtful and heartfelt conversations. So when he texted me he had just gotten off the plane at JFK, I thought I was going to throw up from the anticipation. But when we met up at the Mercer Hotel, we hugged and kissed and I instantly felt at ease.

Eric: We went to this hidden late-night fondue restaurant for dinner, and we were just staring at each other the whole time, leaning into the table. We were so happy. The waiter brought us two glasses of Prosecco and said, “Hey, you guys just won the cutest couple award for the night.” He said, ‘I just want to be one of you, the way you’re staring at each other right now. You’re so in love and the whole place can feel it, so thank you for that.”

Natasha: I always thought that love was supposed to be like that, but it had never happened to me before. My dad always used to say that as soon as he met my mom, he said, ‘That’s my girl.’ Two days later he proposed, and 50-odd years later they’re still married. When I met Eric, I experienced something very, very similar to that. I was like, ‘Wow, this is real.’

Eric: We wanted to stay off the grid in New York, so we took long walks along the Hudson River, and spent half a day in Central Park. It was more about getting to know each other than going out. We didn’t go to a single bar. One night we were walking through Washington Square Park holding hands, and I just got overwhelmed with the feeling that I’d met the person I was going to spend the rest of my life with.

Natasha: I was devastated when the weekend was over. We had already decided Eric was going to visit Toronto a few weeks later for my birthday on January 23. But when I was back in my office in Toronto on Monday morning, I called him and said I was ready to plan my next two trips to Newport Beach, where he lived.

Eric: Initially, we decided that we would never spend more than two weeks apart, but we just kept shrinking that time so we were barely apart for more than three days. Our mantra eventually became, “No days apart.”

Natasha: Right before Covid hit, Eric and I were in Toronto. He was going to stay for five days, and our return trip to Newport Beach was going to be our first flight together. We’d leased a house there and we were just in the beginning of setting everything up. That’s when we started learning how serious everything was getting with the pandemic. The day before we were supposed to fly out, Trudeau and Trump closed the borders.

Eric: I knew I could get back to the U.S., but it wasn’t clear if I’d be able to get back into Canada anytime soon. So we decided that the smartest thing for us to do was stay together in Toronto and remain at Natasha’s home in South Hill.

Natasha: Under normal circumstances, we’d have the opportunity to just date and get to know each other, and there wouldn’t be all of this pressure to choose a country. But we literally had to decide between the U.S. or Canada because we didn’t want to get separated like many other couples were.

Eric: There were a few challenges. In April, I lost my mother—not due to Covid—and I had to support my family from Toronto. It was really tough not being able to travel to California to see her in the hospital and to be away from my family during a difficult time. At the same time, staying together was a gift. Natasha was so supportive through my family’s loss, which made me love her even more.

Natasha: So far we’ve spent 260 days together and haven’t had a single disagreement. We made our home feel cozy by baking and cooking. We challenged ourselves to recreate a lot of recipes from Anthony Bourdain’s Appetites, which Eric wrote about. Bourdain’s spicy macaroni and cheese has become a household favourite.

Eric: Four or five times a week, we’d go on long walks together, and Natasha would show me a new neighbourhood in Toronto.

Natasha: We walked to the Danforth, Rosedale, Forest Hill, Little Italy, the Annex, Casa Loma. Eric fell in love with Palmerston Street. Seeing Toronto through his eyes gave me a whole new appreciation for it. We ended up finding all these incredible little shops, like Alex Farm Products cheese shop on the Danforth. All these places and neighbourhoods I never got to really explore because I was always working 15 hours a day.

Eric: I’ve since become a Toronto resource for a lot of people—even those who’ve lived their entire lives here—because I’ve walked every street downtown. You want the best bagels? Freshest fish and caviar? Best selection of delicatessen meats and cheeses? I’ll tell you where to go.

Natasha: Eric writes for Rolling Stone, Men’s Journal, Revolver and a number of other publications. Along with copywriting, he specializes in luxury automotive, motorcycles, and real estate development. From a PR perspective, I could see the opportunities. So my firm, NKPR, hired Eric as our executive creative director. Now we have the chance to work together and live together. I feel this huge sense of relief now, knowing that we won’t be separated by border restrictions or contrasting careers.

Eric: Based on my education and journalism career, I was approved for a professional work visa that allows me to stay in Canada for up to three years. Putting together the application was a lot of work, but now we’re able to stay together—the one thing that we knew we wanted at the beginning of our relationship.

Natasha: Before the pandemic, we figured we’d be going back and forth between California and Toronto frequently, spending a lot of time on planes. After spending several months here in Toronto, we’ve decided we’re not going to do that, even after Covid’s over. We’ll maintain residences in both places, but we are going to travel less and spend more quality time in each place. Right now, we’re planning on spending half our time, if not more, in Canada.

Eric: We’d been planning on going back to Newport Beach since March, but kept getting delayed because of travel restrictions. We had half our stuff in the new house unpacked, so we were hoping to get back to to finish setting up. We were finally able to travel back to California in July for six weeks before coming back to Toronto.

Natasha: Eric fell in love with my dog, Kody, and we decided we couldn’t leave him when we went to California, so we got all the paperwork done so Kody could travel with us. It was so nice to get settled and finally meet Eric’s dad and brother. We stayed for six weeks, and now we’re back in Toronto, quarantining for two weeks. We just adopted a new puppy, Poe. He’s a black Lab, just like Kody, from the same breeder here in Ontario.

Eric: One day, before the pandemic, we were wrapping up a phone call and I said, “Okay, it’s time to say goodbye.” Natasha said, “I don’t ever want to say goodbye,” so I suggested, “Let’s delete that word from our vocabulary and say “I love you forever.” That became our replacement for “goodbye.”

Natasha: I didn’t like saying goodbye or goodnight because they felt so final. It was always unsettling for me. Once his visa was approved, and we knew we wouldn’t be separated by borders, it was the first time in eight months I felt comfortable enough to be able to say those words.