By Jennifer Cheng | Photography By William Notman, courtesy of the McCord Museum |  December 22, 2016

By Jennifer Cheng | Photography By William Notman, courtesy of the McCord Museum |  12/22/2016

William Notman was Canada’s most iconic 19th-century photographer. The Scottish-born artist documented the final moments of the Victoria Bridge’s construction, captured the country’s vast natural landscapes and took countless portraits of Canadians. People flocked to his studio on Bleury Street in Montreal, one of more than 20 such spaces he had across Canada and the United States in the 1880s. “It was the kind of place people gathered to look at others—and to be seen,” says Hélène Samson, curator of the Notman Photographic Archives at Montreal’s McCord Museum.

Notman, A Visionary Photographer, on now until March 26 at the McCord, is the first full retrospective on the photographic pioneer’s life and career. “The ideas we have of Montreal and Toronto come from his images,” Samson says. “Actually, we can say the same thing for the Canadian Pacific Railway, the Rockies and all of Canada. He contributed a great deal to our geographic imagination after Confederation.” We asked Samson to tell us about four very old photos of Toronto in the show.

Stereographs from the Queen’s Maple Box

When the Prince of Wales attended the opening of Montreal’s Victoria Bridge in 1860, Notman prepared a maple box, full of stereographs of Canada East (now Quebec) and Canada West (Ontario), as a gift for Queen Victoria. “The documentation of the bridge was his first important contract,” Samson says. “It put him on the map.” Notman made another copy of the box, which was displayed at the 1862 International Exhibition in London and at his Montreal studio in 1864. One of Notman’s great-grandsons donated it to the McCord in the 1960s. In 1868, Notman sent his colleague John A. Fraser to open a studio at 120 King St. E. “In those days, getting your portrait taken at his studio was not an ordinary event,” Samson says. “It was a way to define yourself and to be seen at your best. You would come in your best garments, like a big fur coat for his staged winter scenes.” Fraser closed the Toronto studio in 1883 to focus on his career as a landscape painter. Believe it or not, Toronto’s streetcars used to be pulled by horses. And the city’s tallest skyscraper—the Beard Building on King Street East—was just seven storeys high. The King Edward Hotel, visible in this shot, remains, but much of this scene of Yonge and King is now unrecognizable. One of Notman’s employees took this photo after Notman’s death. The shot looks east from the headquarters of Canada Life—the country’s first life insurance company—at Bay and King. It was the 12th and final day of Canada’s Great Victorian-Era Exposition and Industrial Fair, a bustling precursor to the CNE with themes like “The New Woman” and “Victorian-Era Exposition,” and prizes that included cows, bulls and oxen. 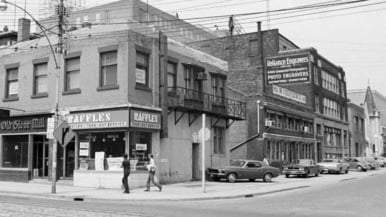