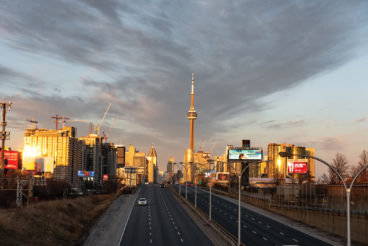 The gridlock, the subway squeeze, the lunch rush, the usual cacophony of life in the city have all been replaced by wide empty spaces and an eerie silence. Toronto as a ghost town

Early on in the pandemic, before the city went on lockdown, I was on my motorcycle, heading out for a few groceries, and it occurred to me that I was in boots, gloves and a full-face helmet—perfectly equipped to get around town while observing the prescribed social distance. As Toronto Life’s director of photography, I’m always on the lookout for big Toronto stories to tell—the protests, the celebrations, the stuff that brings people together and makes for iconic imagery. But this was a different kind of story. When Covid-19 descended on the city, there were no enraged citizens marching on Queen’s Park, no triumphant superstars riding down University in their double-decker chariot. Toronto didn’t shut down in a day, but it wasn’t open for business either, and I knew it was our job to document the transformation.

On March 19, I started making my rounds, hitting popular public places when they’re normally packed: Union Station at rush hour, the Eaton Centre at lunch and Yonge-Dundas Square whenever. The Eaton Centre was the first to empty out; the few who lingered among the closed shops looked like weary tourists on a deserted movie set. At Union Station, I paid my fare to get on the TTC, then wandered through the PATH. Over the course of the morning, I encountered one puzzled-looking security guard and a handful of other people who looked equally dazed and adrift. Otherwise, silence. Getting around was a breeze, and parking even easier, but riding through the city was disorienting. The rhythms of Toronto had been obliterated.

The warm, sunny days were the most disturbing, those early spring days when Toronto is usually at its best, the streets teeming with people coming out of their long hibernation. Those days turned in on themselves. Instead of lining up by the dozens for Sunday brunch, Torontonians were now queuing for canned goods and dried pasta. As the food lines grew and the streets and public spaces emptied, I set out to look for dramatic scenes but ended up shooting mostly nothing at all—normally busy streets, highways, malls, train stations, subways, parks, public squares, all eerily empty. Below is a selection of photographs from a city on pause.

The giant food court at the Eaton Centre is usually crammed at lunch. When I visited, it was cordoned off, with the tables and chairs removed—a visual cue that we were in uncharted territory.

Union Station, with its Beaux-Arts architecture, looks more like a European cathedral or museum after-hours than the central hub of a metropolis.

This was the first weekend of spring, and one of those Toronto evenings when the city would normally be alive and buzzing with eager restaurant-goers trying to beat the rush to get a table.

An eerie calm settled over the entire city. I’d never seen Lake Shore this devoid of traffic before.

In my travels, I noticed signage popping up around the city, messages of hope and caution. I wanted to capture how these small displays can lift our spirits.

This was the day the city declared a state of emergency, one day after Toronto’s first Covid-19 death, and the first full work week when businesses were officially asked to shut down, so I returned to Union and retraced my route to see how things had changed.

I wanted to make sure what I was seeing wasn’t a blip, so I rode the train to one station and then circled back. I felt like the last kid on the haunted house tram at the CNE.

Back at Union, there was a trickle of lonely figures, likely heading to one of the last few offices yet to shut down. I felt a certain camaraderie with them. Toronto Life’s offices had closed on March 13, and I’d been working alone since then.

Continuing my route through the PATH, I stopped at BCE place, often photographed and always beautiful, but rarely this deserted.

I popped back outside to see if there was any life on the streets. People were still out and many still had to work, but the mood was different and more masks started to appear.

The pedestrians walking downtown stayed in their own two-metre bubbles. Torontonians aren’t known for greeting each other on the street, but suddenly there was a greater sense of detachment, as if acknowledging another person would itself break the social-distancing rules.

At first, the rules of social distancing were unclear: the messaging from the various levels of government was inconsistent or changing daily. Closing the playgrounds left no room for interpretation.

There was something especially disturbing about seeing police tape around kids’ play structures—a necessary evil.

In the before times, an empty on-ramp to the westbound Gardiner was unheard of, especially at rush hour.

At first, mask-wearing seemed alarmist, then inconsiderate (when health care workers needed whatever PPE they could get their hands on), then, slowly, socially acceptable and finally a required outdoor accoutrement, sick or not.

Grocery stores were a locus of chaos in the early days, but Torontonians found civility in this time of uncertainty, dutifully lining up, six feet apart (though that’s hard to discern from the perspective in this image), and waiting their turn.

I visited Yonge and Dundas every day. At first, it was infuriatingly busy—there was a line down the block for EB Games and people were shooting music videos in the square. Then came the giant neon-green billboards that you could see from half a kilometre away. That seemed to do the trick.