“Some people do 25 kilometres at a time”: Why these Torontonians have embraced open-water swimming in the Beaches

“Some people do 25 kilometres at a time”: Why these Torontonians have embraced open-water swimming in the Beaches 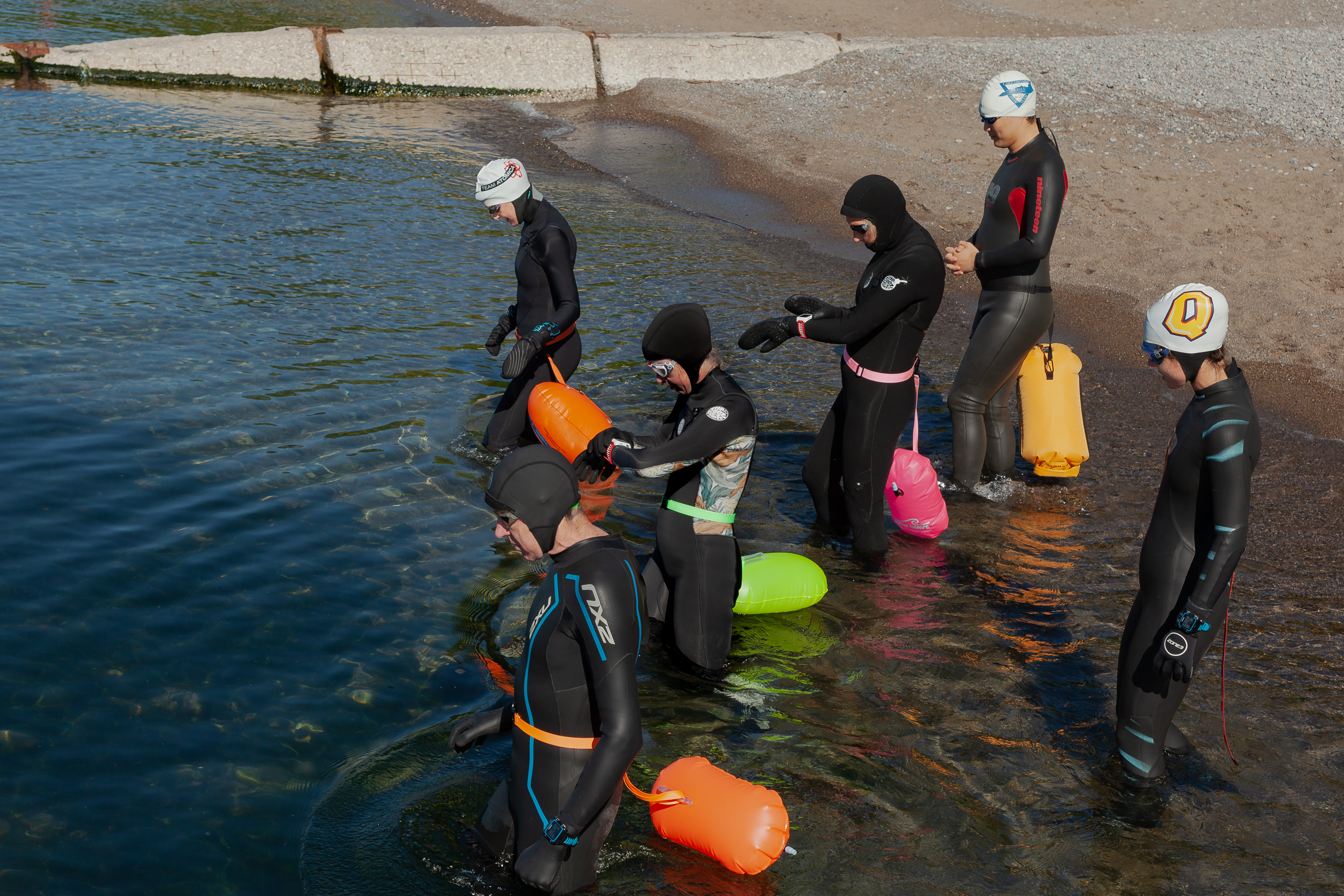 In 2016, Beach residents Jessica Campbell and Mitsy Layton started the Facebook group Toronto Beaches Open Water Swim Group, where people can arrange to swim together in the eastern Beaches. When Covid shut down city pools, the group swelled to over 640 members over the past year. We spoke with the two founders about the meditative power of open-water swimming.

Jessica: I live at the eastern end of the boardwalk in the Beaches, and I’ve been open-water swimming at the foot of Silver Birch Avenue for the last 15 years. In the summer I usually make it out there two or three times a week. There is absolutely no comparison between swimming in a big, beautiful lake and doing laps back and forth in a dark, chlorinated pool. There’s something so meditative about being out in the middle of the lake. There’s just you and your breath. There are no distractions. It clears your head. I love going on early morning swims and watching the sun come up. You see a bright pink and orange sun coming up over the water, and when it starts to reflect on the skyline, the whole city looks like a chandelier. After a swim, I feel refreshed and energized. It’s the endorphin rush: I feel like I could conquer the world.

Mitsy: Jessica and I are both triathletes, and we met back in 2014 through competitions.We live pretty close together in the Beaches and we started swimming together because it’s much safer to swim with a buddy than on your own. It helps to increase our visibility, and we’re able to check in with each other to make sure everyone is feeling strong. You can get lost in your own world while swimming in the lake. It’s so beautiful. I feel so connected to the water that it’s almost like I’m a fish.

Jessica: Five years ago, I was out on a swim with Mitsy and our friends Bob and Brian. I thought to myself, why aren’t there more people out here? I realized it was because they probably don’t realize that open-water swimming is something they’re allowed to do. Soon after, I started the Toronto Beaches Open Water Swim Group, or TBOW, on Facebook. It was about sharing that joy and letting people in on our little secret.

There’s a lot of misinformation about open-water swimming that we try to counter. People are like, ‘Isn’t it polluted?’ or ‘Won’t you get run over by a boat?’ I blame it on bad history and long memory. The city’s beaches used to be polluted—as a child I recall seeing dead fish wash ashore. But in the late 1970s and 1980s, industrial and sewage controls were put in place and the water quality rebounded. Eight of Toronto’s beaches are part of the internationally recognized Blue Flag Beach program; to earn that designation, the water has to not only be clean, but tested daily. You can download an app called the Swim Guide to check water quality each day. The flags at the lifeguard stations on the beach will be red if the water is not meeting the clean-water criteria.

In our group, any member can write a post letting everyone know when they’re going for a swim and inviting others to join. You make a date, you meet up, you go swimming. 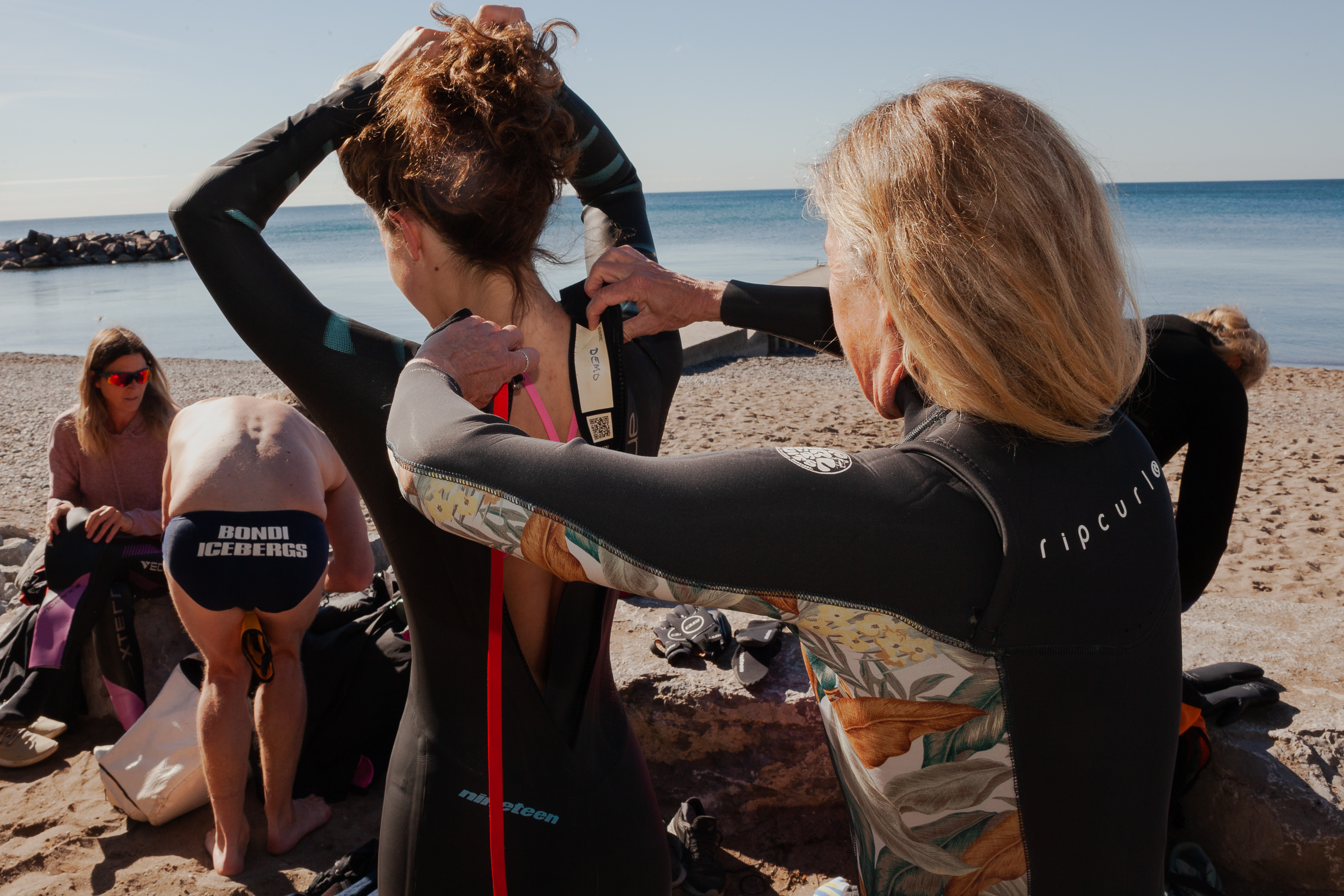 Mitsy: Open water swimming is incredibly challenging, both mentally and physically, but it’s also a nice way to be social with friends. When we started the group, we had six members. Before the pandemic, we were at around 400. Now we’re at 600-plus, because pools are closed and more people are taking up outdoor hobbies. I’ve met some of my best friends through the Facebook group. We’re friends outside of swimming now because we all really like each other.

Most years, we do a group swim from Silver Birch all the way over to Woodbine. The idea is that supporters and family members can walk the boardwalk alongside the swimmers. The first year we planned it, the waves were so huge that we had to postpone it. Not everyone in the group is experienced enough for that level of choppy water. But there were four of us who decided to going to go out and swim anyway. It was crazy. I’d get pulled under  for a while, and then I’d relax my body and wait for the water to push me back up. I felt like I could do anything after that swim.

Jessica: The group has people from all walks of life. There are doctors, lawyers, teachers, stay-at-home parents, university students. We have swimmers as young as 15 all the way up to 70. I’ve met some really inspirational people through the group. For example, Kim Lumsden has done two crossings in her life and was the second-youngest person to swim across Lake Ontario when she was 19, after Marilyn Bell. She’s in her 60s now and is currently training for her third crossing, and last summer she did an epic 25-kilometre swim at Cherry Beach. She is a living legend in the open-water swimming community.

Jessica: My scariest experience ever was during a swim with my sister. We had stopped to chat near the shore, and I saw a jet ski coming behind her. The driver was looking past us and into the horizon—I could tell he didn’t see us. I started screaming and splashing around and yelled at my sister to go underwater. The jet ski missed her head by about a metre. Ever since then, I’ve been adamant about using swim buoys, which strap to your waist and help make you visible in the water and provide some buoyancy in case you get tired. We also suggest people wear brightly coloured swim caps. Being an open water swimmer is a little bit like being a cyclist on the road—you need to do everything to make yourself seen. 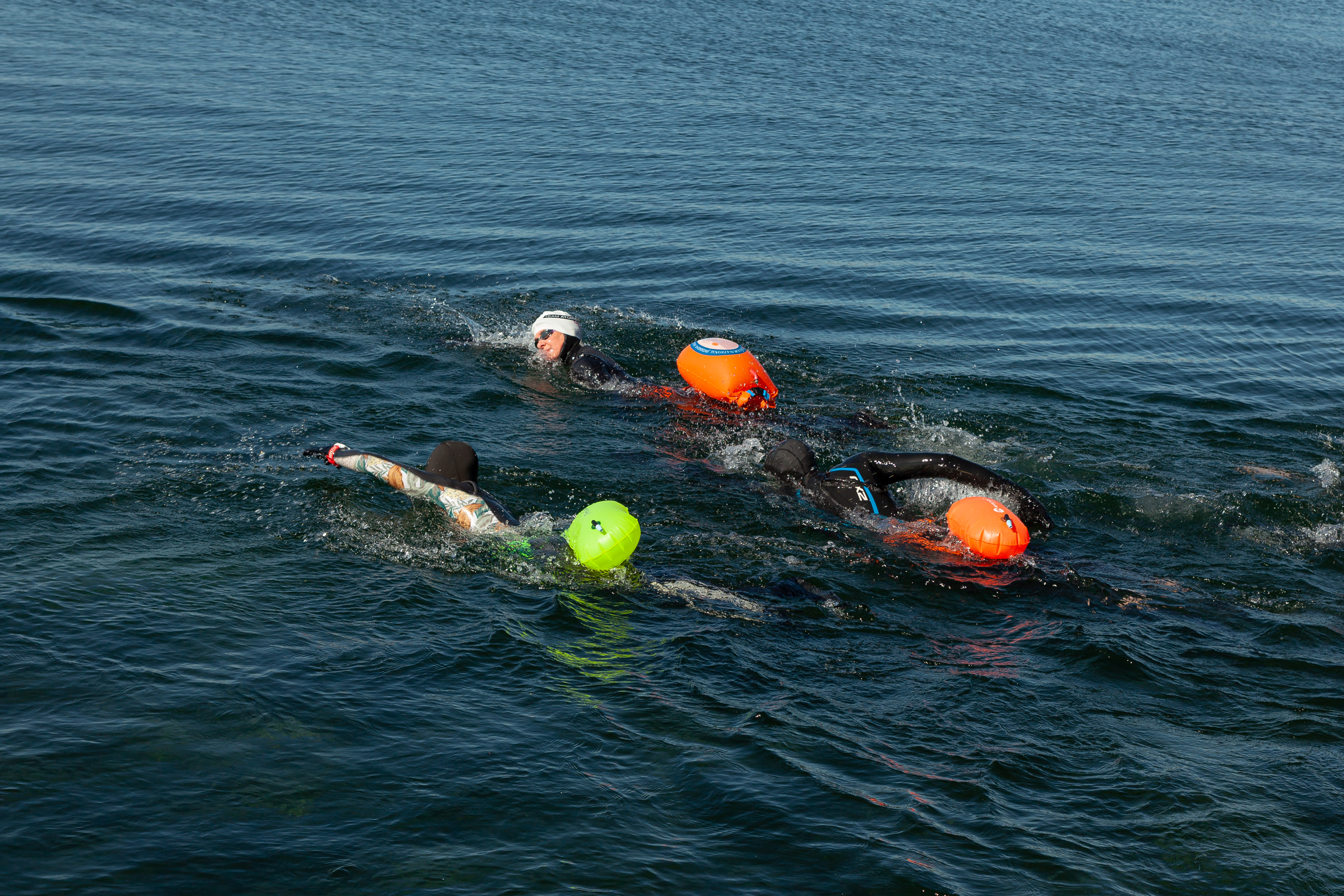 Mitsy: One time, when three of us were doing a really early sunrise swim from Silver Birch beach to Leuty lifeguard station, I saw something I’d never seen before. As we arrived at the station, I heard the soft tinkling sounds of classical music on a piano. I thought, am I imagining this? But lo and behold, there was a guy playing his piano on the beach. Apparently he has a rig with his bike and hauls his piano down to the beach to play sometimes. It was so surreal.

Jessica: In August 2019, I swam with six friends from Silver Birch east to Bluffers Park, which is about five kilometres—the longest swim I’ve ever done. The water was clear, flat and warm, and we even had a little tail current. We passed the R.C. Harris Water Treatment Plant, which looked magical from the water. Then we passed a number of little-known beaches and finally arrived at the spectacular white cliffs of the bluff. I felt like I was hours away from the city.

Mitsy: In 2019, I to do a week of sunrise swims. It was late September and the water was really warm. I didn’t think I’d get many takers in the Facebook group, but each day more people showed up. It’s so fulfilling when you realize you can initiate joy in somebody’s morning.

Jessica: We got a bump in membership because of Covid, and our seasons are longer now too. The demand for thermal gear and wetsuits has really taken off. Normally I swim from June until late September, but last year I invested in a really thick wetsuit, a hood and some booties and now I can swim from March to November.

We even have some members who swim every month of the year. I’m not that tough. But I started swimming in cold water because of Covid, and I’m going to keep doing it because I love it. It’s a little painful for the first five minutes in the water, but then you get used to it. It’s like climbing a mountain: once you finish you feel like you’ve done something pretty incredible. The water clarity when it’s cold is amazing. You can see the bottom of the lake, which at Woodbine Beach is so sandy it’s like you’re in the Caribbean. Covid has made me realize that I can tolerate much more than I thought I could.

Mitsy: It’s amazing to see how people get braver after being exposed to the water. We have one friend from triathlon who only ever swam in pools. Now he’s done swims all the way from Silver Birch to the Scarborough Bluffs and back, which is around 11 kilometres. 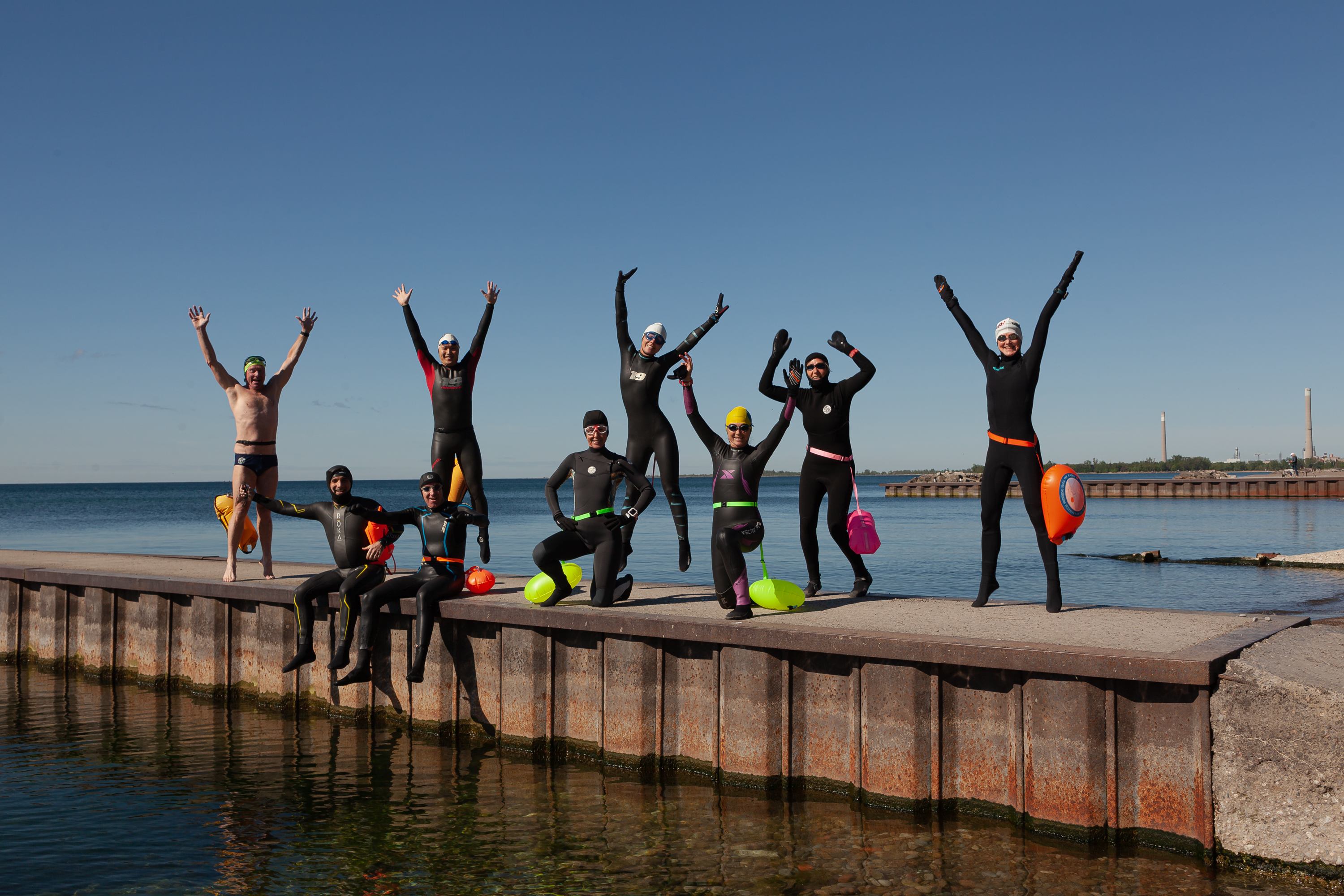 Jessica: We haven’t posted any new swims for the season yet because of the lockdown, but now that the stay-at-home order is lifted, we’re going to encourage newbies to come. That way we can look out for them, show them the ropes and help them get more comfortable in the water. We’ve  been strict about Covid protocols for the last year, making sure people keep their distance and don’t congregate to chit chat after a swim, and yet there’s still that feeling of community. For some people, experiencing this beauty in the presence of others has been instrumental in helping them get through the pandemic. One of our swimmers is a front-line health care worker, and she managed to swim all year long. Like so many of us, she finds swimming to be a form of therapy.

Mitsy: These swims bring a richness to my life. I find them fulfilling in a very philosophical way. Obviously you’re exercising, but there’s more to it than that. If you meet at Silver Birch at 6:45 a.m. with a couple of pals to watch the sunrise, it feeds your soul. We are living through a pandemic, which is very stressful, but just for a moment you can go swim in the lake and forget about everything that is happening in the world. It’s like meditation. Even if you’re going to be stressed out for the rest of the day, at least you’ve had a break.