Early Sunday morning, a car drove into the Queens Quay streetcar tunnel—again. Since the route reopened in 2014, 25 drivers have pulled up to the tunnel entrance, glanced at its wall of flashing red lights and do-not-enter signs, and thought to themselves, “Sure!” (Update: Make that 26 drivers. The TTC had to remove a blue BMW from the tunnel on St. Patrick’s Day. TTC communications director Brad Ross tweeted hours later that the commission will install a gate to keep cars out.)

I don't understand how this keeps happening… #toronto

Next month, you too can experience the thrill of getting your ride stuck in the city’s stickiest streetcar tracks, thanks to the local heroes who just created a Facebook event dedicated to “the activity Torontonians just can’t get enough of”: 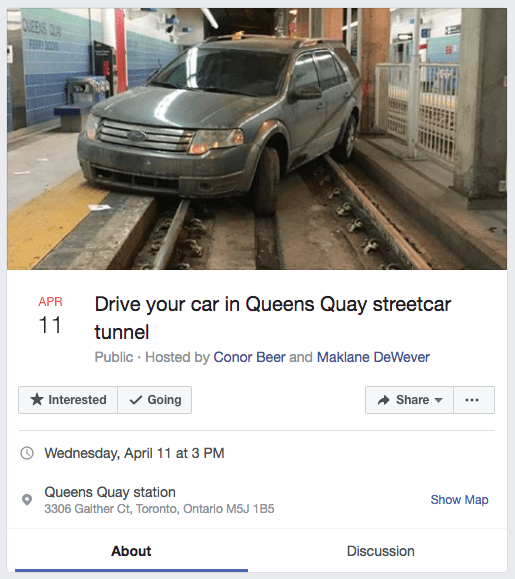 It’s all a joke, of course, but in the spirit of the big day, here’s a look back at some of the trailblazers who inspired the event.

STORY: Man in custody after he drove an SUV into streetcar tunnel on Queens Quay http://t.co/dB2YSGr8zM pic.twitter.com/KLO37nujuG

October 24, 2014
The first publicized tunneller was a doozy: the driver reportedly stole the car in Oshawa, smashed some windows along Queens Quay and then, for his encore, motored down the streetcar ramp. Police called a hazmat unit to investigate; it’s cute that the city actually got worked up about this sort of thing once upon a time.

November 22, 2014
Less than a month later, a copycat emerged, driving into the tunnel around 4 a.m. on a Saturday morning. According to the Star, “[the TTC is] now considering making the signs warning drivers not to enter the tunnel more obvious.”

July 31, 2015
Because driving in the right lane wasn’t rebellious enough…

April 25, 2016
This is one of the the more impressive ones: the driver somehow managed to make it all the way to Union Station before getting stuck.

An SUV was driven into a TTC streetcar tunnel on Queens Quay causing headaches for commuters Thursday morning. https://t.co/QYZcn9S9ir pic.twitter.com/wYsCKekPcy

October 18, 2017
The TTC added more signs and rumble strips to the tunnel entrance in spring 2017, but that didn’t stop this guy.

December 31, 2017
Our personal favourite: the plate-less SUV that showed up in Queens Quay station on New Year’s Eve.

March 11, 2018
After this incident, one tweeter asked, “Is this one of those drinking games where we all take a shot every time someone drives into the Queens Quay streetcar tunnel?”

The car has been removed from the Queens Quay tunnel and regular streetcar service has resumed. https://t.co/PjLvEkcRTb pic.twitter.com/ACIkz5jx7l

March 17, 2018
Police found this blue BMW on the tracks around 4 a.m. on St. Patrick’s Day and arrested a 24-year-old man for impaired driving. The TTC decided it was the final straw and vowed to install a gate—an incident that we will forever refer to as Gate-gate.

Despite bollards, signs, rumble strips, flashing lights and raised track, some still manage to drive their cars down the Queens Quay streetcar portal, though mostly on weekends and in the middle of the night. Enough. The TTC will now be installing a gate mechanism.