My liver shut down, so my co-worker gave me 70 per cent of his

My liver shut down, so my co-worker gave me 70 per cent of his

I was on the brink, and he saved my life 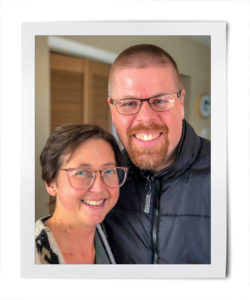 In 2005, fresh out of McMaster University with a degree in mechanical engineering, I applied for a job at ArcelorMittal Dofasco, the largest steel manufacturer in Hamilton. After two rounds of interviews, I was sent on a plant tour with two would-be colleagues to see how I’d fit in. Ian was humble—a natural teacher—and Vikas was a goof. I had no idea then that Vikas would become my husband and Ian would save my life.

I got the gig, and the three of us shared an office. Vikas and I had our first official date at Ian’s wedding to his wife, Carolyn, and by 2011, we, too, were married. The four of us would go to hockey games and to the pub, and we started our families around the same time. I got pregnant in 2013, and it was around then that I noticed some strange symptoms. My palms and feet itched so severely that I couldn’t stop rubbing my feet against the ground.

During routine blood work, doctors discovered I have a rare liver disease called primary sclerosing cholangitis, which causes the ducts that drain bile from the liver to shrink due to inflammation and scarring. If bile builds up, it can cause serious health complications like cirrhosis and organ failure. In my case, doctors warned premature birth was also likely. Just as they predicted, our daughter, Mila, arrived a month early. She was tiny but healthy, and so was I.

It wasn’t until after mat leave that my health took a turn. I was exhausted all the time and, due to cirrhosis, my abdomen filled with so much fluid my neighbour wondered if I was pregnant again. Unable to function, I went on medical leave, while Vikas took on most of the household duties, and his mom, who lives down the street, brought us food. Meanwhile, Mila was growing into an active toddler, and I couldn’t keep up. She would say heartbreaking things like, “It’s okay, Mommy. I’ll run and you can walk.” I was in the ER constantly, twice for ruptured blood vessels in my esophagus that left me vomiting blood and in need of transfusions. By late 2017, digesting food was difficult, and I’d dropped to 100 pounds. I had to have two to three litres of liquid drained through a tube in my stomach every three weeks. That’s when the doctors finally put me on the wait list for a liver transplant.

For medical reasons, I wasn’t an ideal candidate to receive a liver from a deceased donor—I’d need a living person to offer around 60 per cent of his or her organ. The liver is one of the few body parts that can regrow within weeks of partial removal, so living donations are a good way to shorten wait lists. They’re also harder to come by, accounting for less than a fifth of liver transplants in Ontario last year; it’s a major surgery for the donor, and recovery takes up to three months. My chances weren’t great.

My friends and family members applied to donate, but none met the rigorous criteria: they’d need to match my blood type, have a compatibly sized organ and be in excellent health. I realized I’d have to go public to find a donor. How do you even ask for that? I wondered. Who am I to deserve that kind of sacrifice? Nudged by friends, I started an Instagram feed and a Facebook page to get the word out. Friends organized a yoga night and a scavenger hunt where the public could participate and fill out donor applications.

In October 2018, I was called to an appointment at Toronto General, where the doctor told me they had a donor lined up for the following Monday, though she wouldn’t tell me who it was. I’d been ready for this moment for over a year—my hospital bag was packed and waiting by the door—but I was still shocked. The Friday before the surgery, Vikas and I went to Ian and Carolyn’s for dinner to share the good news. Before the chicken was even served, Carolyn burst out, “Oh, thank God we can finally tell you. Ian’s the donor!” He’d gone through the tests to see if he could help. He even cut out alcohol and went on a shake-based diet to get down to a qualifying weight.

Overjoyed, I looked at Ian. I’d worked with him for years. I’d known his kids since they were babies. Now he was willing to risk his health for mine. I asked him, “Are you sure?” He was.

On Monday morning, surgeons removed my withering organ and replaced it with 70 per cent of Ian’s thriving liver. Afterwards, I was groggy for days, but I remember waking up and seeing a note from Ian, who was recovering on a different floor of the hospital. It read “Hello. It’s your brother from another liver.” A few days after the surgery, Carolyn pushed his wheelchair into my room, and he took my hand. I cried and thanked him and cried some more.

This past fall, we celebrated the first anniversary of the surgery, both of us healthy, with fully regenerated livers. Our work lives don’t overlap much these days, but our families go camping together and we still have regular dinners. Mila is now five years old. I walk her to school, I tickle her and I dance with her. The other day, she squealed, “Mommy is jogging!” For the first time in her life, I’m not sick. Ian gave us that moment and so many others.

Sarah Jha is a mechanical engineer in Hamilton.