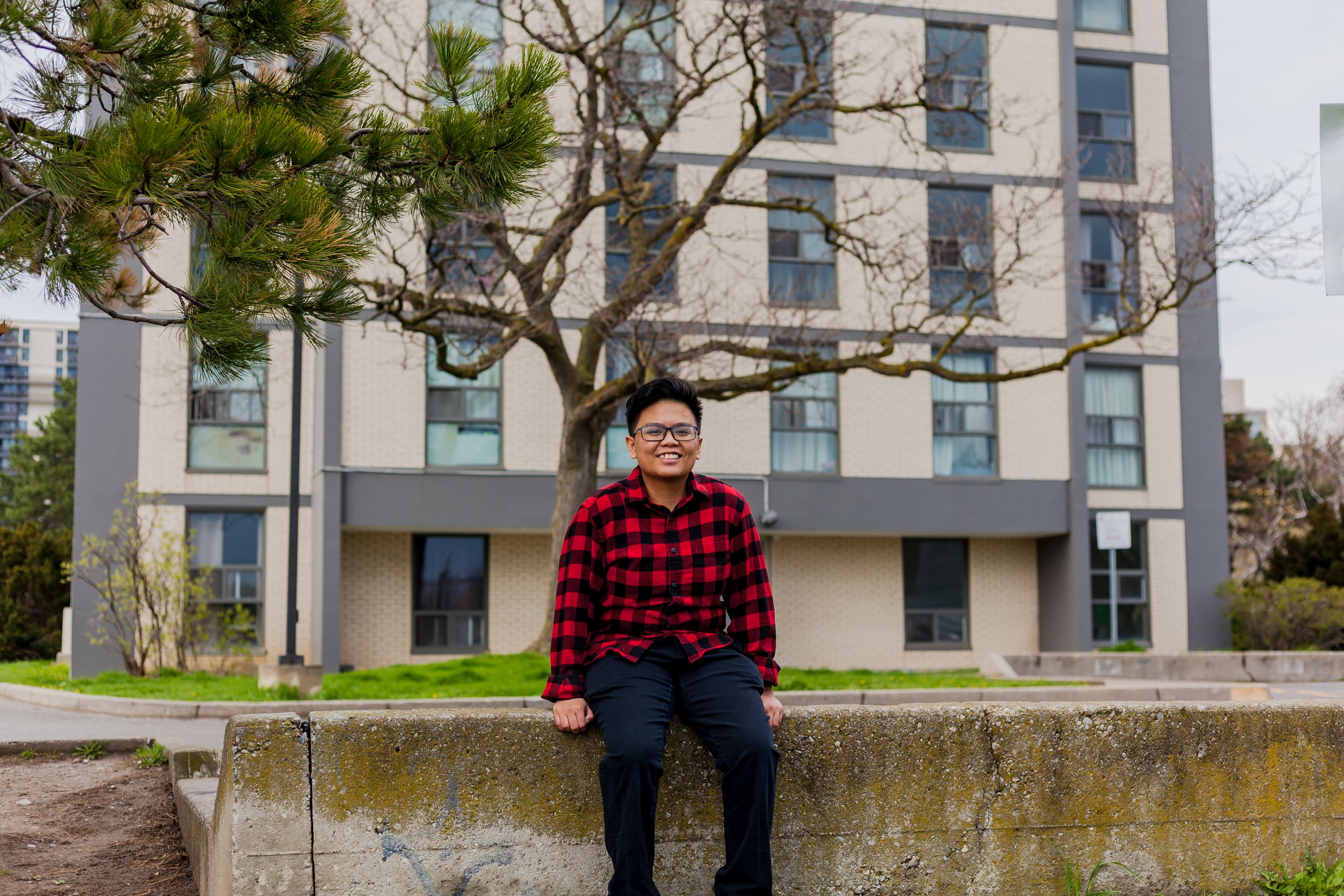 Like many Ontarians, 25-year-old student and research assistant Bea Serdon found the experience of booking a vaccine for her dad to be cruel and unusual. Unlike the rest of us, she decided to channel her frustration into something useful. Earlier this month, she posted on Facebook offering to help anyone having trouble with their quest for the shot. Since then, she has spent hours each day scouring the web for vax vacancies, booked 100-plus appointments (most for total strangers), and earned local superhero status among her fellow jab hunters. Here, Toronto’s vaccine “Batman” shares her story.

“I first found out about Vaccine Hunters Canada on a Reddit board a few weeks ago. I was trying to book my dad for a vaccine appointment as quickly as possible. He had some health issues last year, so I was really focused on getting him an appointment. Like everyone else, I found the system confusing, and wasn’t having any luck. I went on the Vaccine Hunters Canada Discord server, which is basically like a giant chat room with a bunch of small subgroups. I passed along my dad’s info and one of the founders, Andrew, got back to me with an appointment at North York General in less than half an hour. At the time it felt like magic. It was such a huge relief—and I wanted to pay it forward.

“I posted on Facebook telling people who needed help booking a vaccine to DM me, especially the titas, which is what Filipinos call aunties and older women in the community. This was the same day they opened up the rollout to high-risk postal codes for people over 55, including M2J in North York, where my family lives. I knew that a lot of older people in my community weren’t comfortable online or they were too busy working, so I thought I could help them navigate the process. And I had the time.

“I’m a third-year poli sci student at York. If I’m being honest, I’ve definitely watched Netflix or played video games while attending virtual lectures. So I figured, instead of doing that, I’ll try to help people. I started spending a lot of time on the Discord—I’m already a moderator of a similar group for Toronto Raptors fans, so that part was familiar. And then I learned on the job. I work in my bedroom at a wide desk with two monitors, so I’ll set up school on one screen and go vaccine hunting on the other one. It’s not as cool or mysterious as it sounds. First I’ll get a request, either from someone who has reached out to me on social media or from someone who has come to the Vaccine Hunters Discord, and then it’s just a matter of working the different websites: the provincial booking systems, the University Health Network, the individual hospitals, and now the pharmacies.

“It can be really monotonous. I’m checking the same sources every 15 minutes. Nothing, nothing, nothing, and then—finally!—there is a vacancy. It’s a rush, sort of like getting front-row seats for a K-pop concert. But when you find a slot there’s also a a panic that sets in because you only have a certain amount of time to confirm it. The other day I found an appointment, and I was in office hours with a prof at the time. I had to say, ‘I’m so sorry, but if I don’t send a text right now, someone is going to miss their chance to get vaccinated.’

“A lot of the people I’m helping are caregivers. My cousin is a student at Medix College, so she spread the word on her group chat. The first person I booked for was a PSW student named Arlene. Technically students don’t qualify as health care workers because they’re not employed, even though they’re in the same high-risk environment. Luckily Arlene was over 50, so I booked her that way. Another grey-area group are caregivers working in private homes rather than health care facilities. Plus, many of them can’t take time off even if they can get a booking. I will get requests like, ‘Can you help me book an appointment in this neighbourhood for Wednesday between 7 and 8 p.m.?’ Obviously the more parameters, the harder it is to book, but I don’t mind a challenge.

“At this point, I would say I have booked about 120 appointments. Maybe more. It’s a mix of complete strangers and people I have connections to, including people from the Raptors Discord. Earlier in the month, I was getting a couple of calls a day, but now it’s a lot more than that. Demand goes up every time there’s a new way to access vaccines or a new group becomes eligible. It’s not easy to keep up. The other day I looked out my window and saw a lineup for a pop-up at Parkway Forest Community Centre. I shared it on the Discord, and then I just started sending messages to everyone I knew in my building and in the neighbourhood. This one guy was holding back because he thought he might not get there on time. I was like, ‘Dude, just try!’ And then I was on the phone to him telling him, ‘You got this—now run!’ I have never met this guy before in my life. I don’t know anything about him except that he is vaccinated.

“I guess you could say it’s become an obsession. When I found some availability at North York Hospital, I sent a Facebook message to this guy I went to high school with: ‘I know we haven’t seen each other in five years, but if your mom is waiting to be vaccinated, you should sign her up here.’ I offered to drive a stranger to her appointment because her daughter, who first reached out to me, is pregnant. The furthest request was from someone who is living in Spain, but her mom is here—she was one of my titas. My record is four minutes: last week I got a request from a guy with a health condition at 1:41 p.m. and by 1:45 he had an appointment.

“Everyone on the server was pretty impressed with that one. They’re the ones who started calling me Batman. I guess the joke is that anyone who needs a vaccine can just put out the Bat signal and I’ll be able to find something. Of course I’m very flattered, even if I definitely don’t feel like a superhero. Being a vaccine hunter is more like being a detective: every case is different, and often you need to find the right clues to crack it. With the private caregivers, for example, it’s a good idea to bring along a pay stub and a letter from your employer. Or if you’re here on a travel visa, you want to make sure you have your passport and documentation. Sometimes this information can make the difference, and it empowers people to advocate for themselves. I’ve spent a lot of time on the phone with front-line workers—often people in marginalized communities or people who have English as a second language—just reassuring them that they qualify, they deserve this. The other day a private care worker called me from the pharmacy! I just stayed on the phone for moral support.

“I always tell people to text me when they’re done. Those messages are the best. I’ve gotten some vaccine selfies, and one person offered to take me for coffee when this is done. A lot of people assume that I work for the UHN or something, and then when they find out I’m just doing this as a side project they will offer to pay me. I have mostly said no, except the one tita who offered to pay for my Uber Eats. My parents were away and I didn’t want to waste time making dinner when I could be on the computer.

“My family is proud. They laugh about my alter ego. The other morning, I came to the table for breakfast and my mom said, ‘Oh, good morning, Batman.’ If I’m being honest, I’m really more of a Marvel fan, but more importantly, I don’t want to make this about me. Anyone can be a Batman, and that’s really the best part. I started this because of how grateful I was to Vaccine Hunters, and hopefully others will do the same. I shared a tip with one woman who reached out on Facebook; she messaged later to say that not only had I helped her get her vaccine, but also her two daughters and a friend. Another woman from the Discord told me that when she heard about my work, she was inspired to do something similar. She’s not as comfortable online, so instead she put up posters all over her building telling anyone who had questions to knock on her door. Hearing these stories is what keeps me going, even if I should probably be focusing on exams right now. I write my last one on Sunday, and after that, I will have even more time for my passion project.”