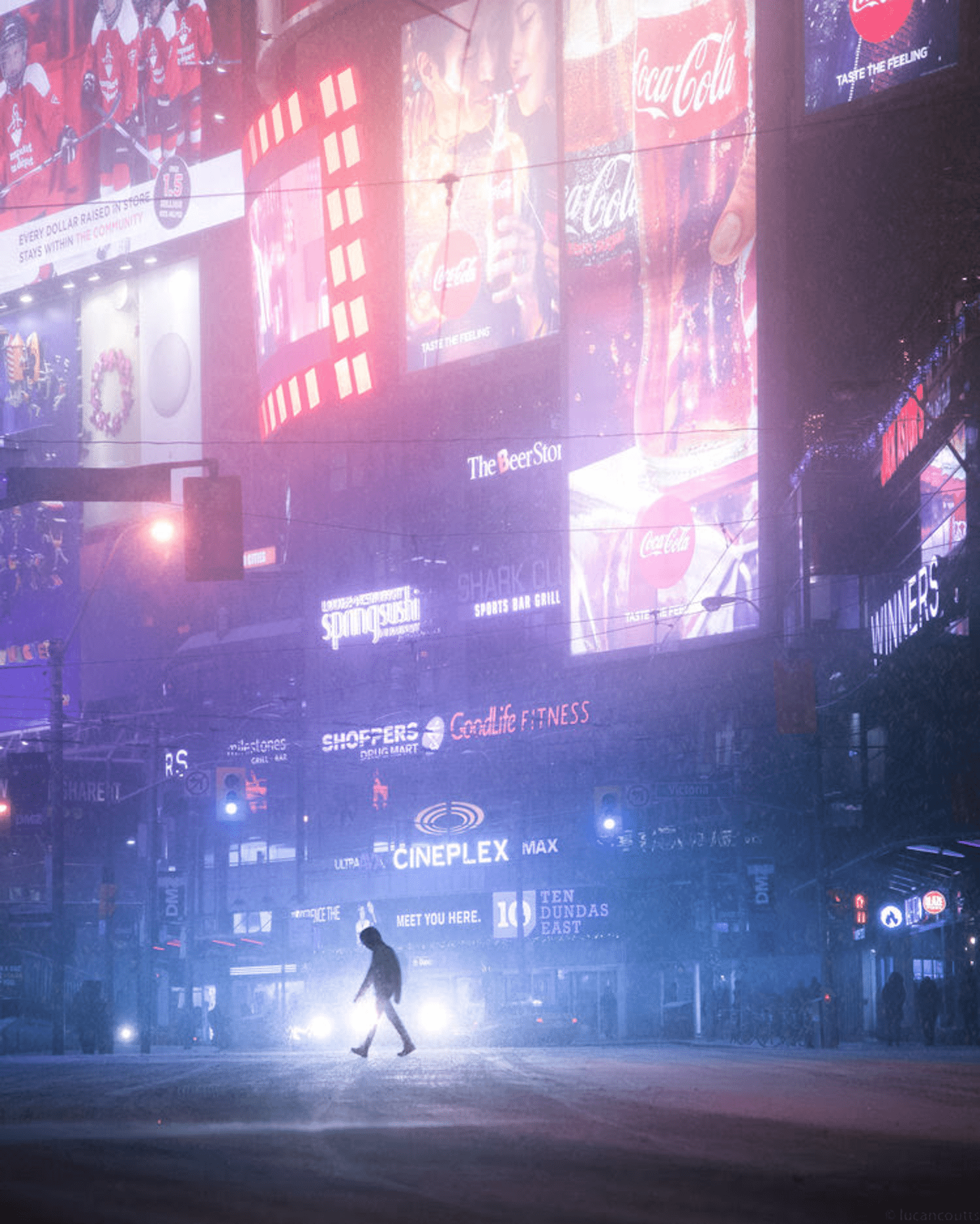 Photographer Lucan Coutts makes Toronto look like the setting of a sci-fi flick. The 20-year-old Ryerson student began taking his cyberpunk pictures three years ago. As a teenager from Whitby, he would board the GO train into Toronto as often as three times a week, camera in hand, to spend a night in the downtown core, trying to capture the energy, motion and bright lights of a place that bustles until dawn. Coutts says his shoots are inspired by one main question: what happens after the workday ends? He takes shots from rare perspectives—like atop a skyscraper or construction crane—in search of the answer.

Last week, one of his photos, shown above, exploded on Reddit and Twitter (a tweet with the image was liked nearly 150,000 times), where Toronto sci-fi nerds fawned over the fact that he’d made the city look like a scene out of Blade Runner. He gained 16,000 Instagram followers overnight. “That was pretty cool to see that reaction to my work,” he says. Coutts isn’t a movie buff, though. He instead relies on music for inspiration: electronic acts like Odesza, Illenium and Crywolf, and lesser-known chill-step artists like U.K.’s Miro. “Music conveys a mood to me that movies can’t,” he says, adding that he edits to tunes with a slower tempo. “Funny enough, I’ve never seen the Blade Runner movies.”

Here, the stories behind more of Coutts’ shots.

If there’s fog or a snowstorm in Toronto, there’s a good chance Coutts is downtown with his camera to get shots like this one. He spent about two hours climbing and navigating a construction site to perch himself on a crane on the then-under-construction Harbour Plaza to take it. “I like the fog in the image,” he says. “I love the lights on the ACC—they show you that the city is alive.” 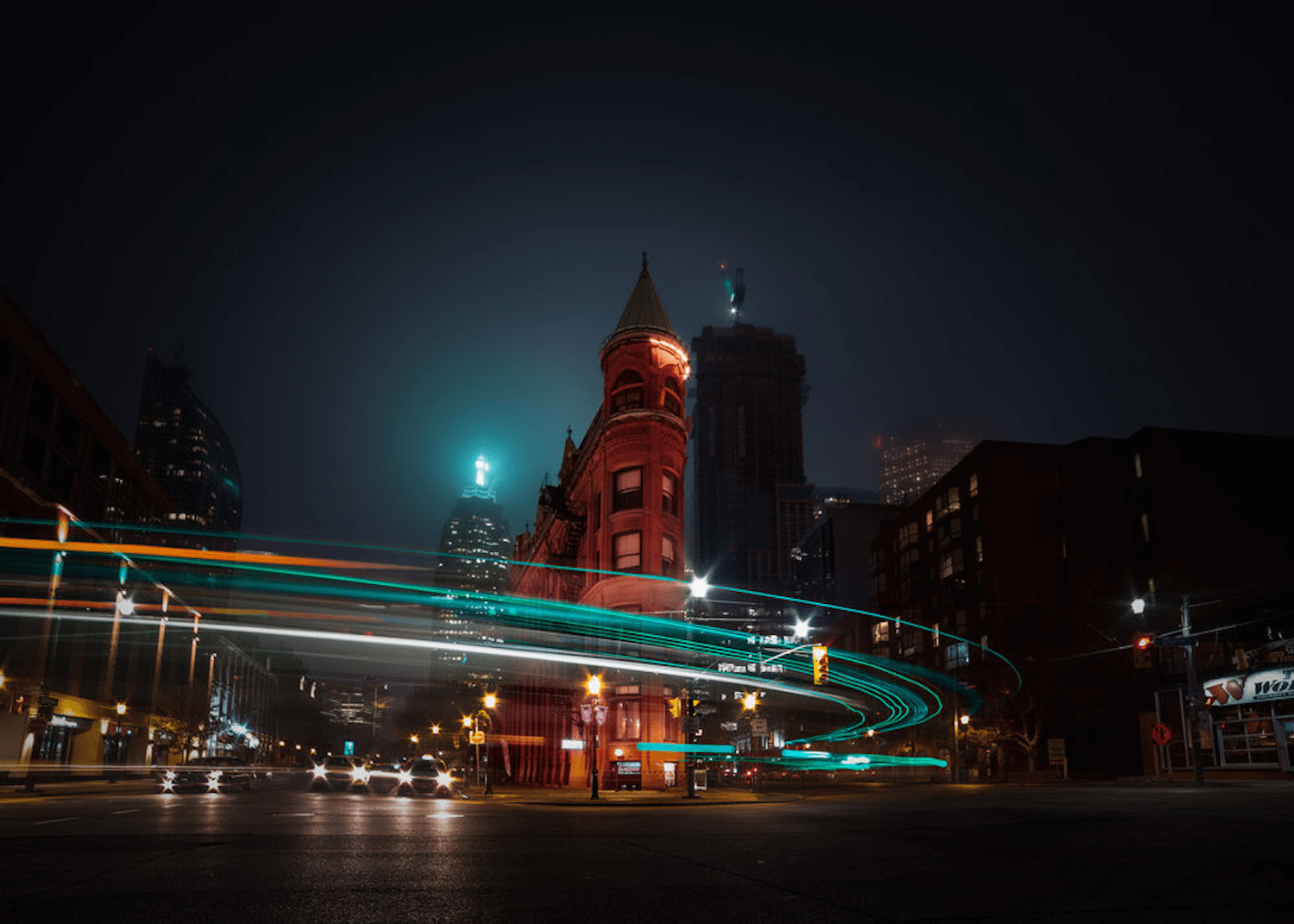 The Gooderham flatiron building has been shot time and time again, so getting an original photo is a challenge. On this particular day, Coutts was experimenting with a new lens. Coutts says neon signage, a 1980s vibe and Netflix’s Black Mirror are big inspirations. “I love that element of technology gone wrong,” he says. 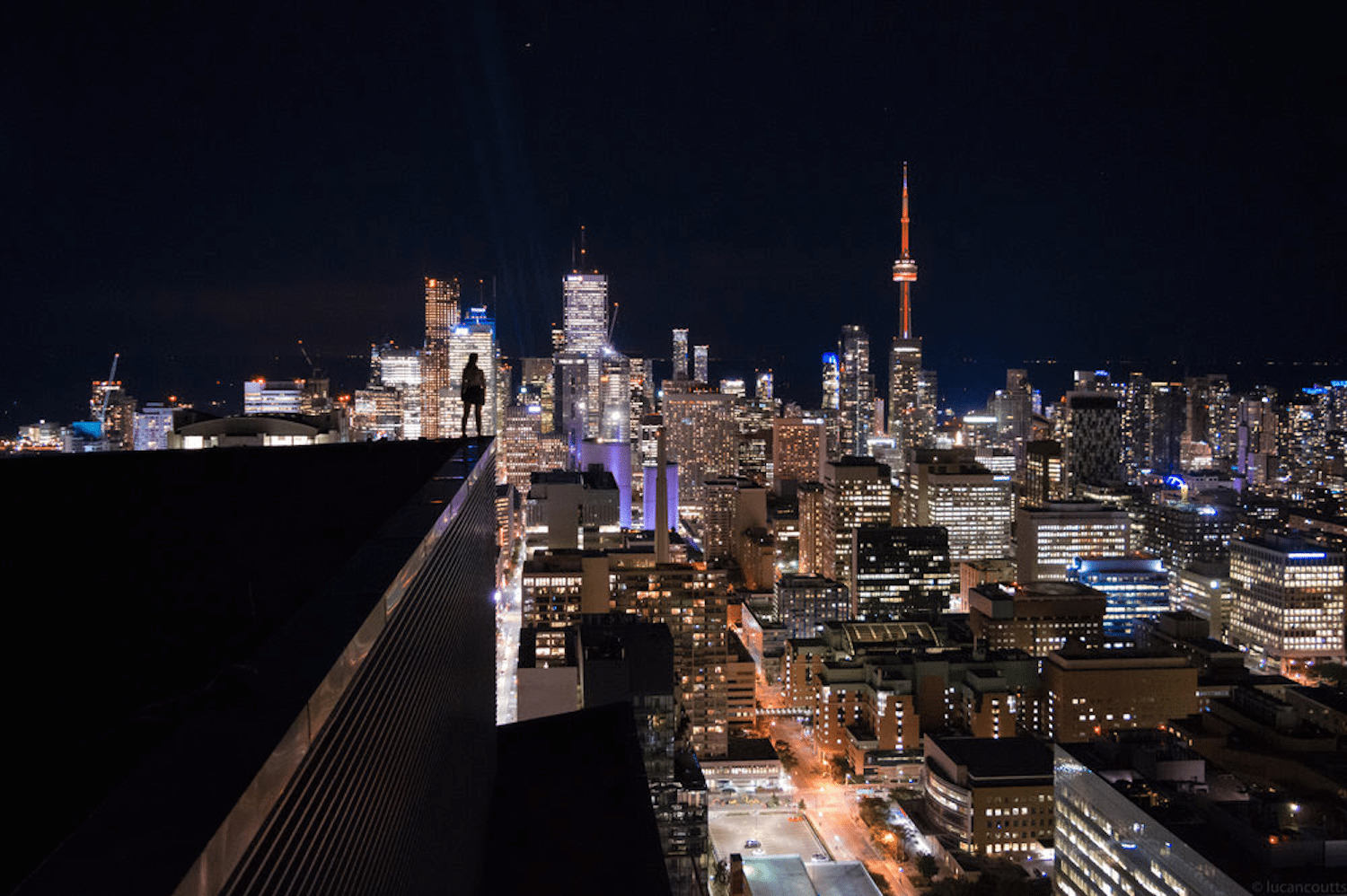 Coutts often shoots with the same group of friends, a network of people he’s met through photography and urban exploration who double as models on any given night. The woman in the shot is a friend he met through Instagram because they had a number of mutual photographer friends. He tries to tell a story with every one of his photos. “It looks like something out of an action movie,” he says. “She has an aggressive stance, she seems fearless and she’s got this sprawling city out before her.” 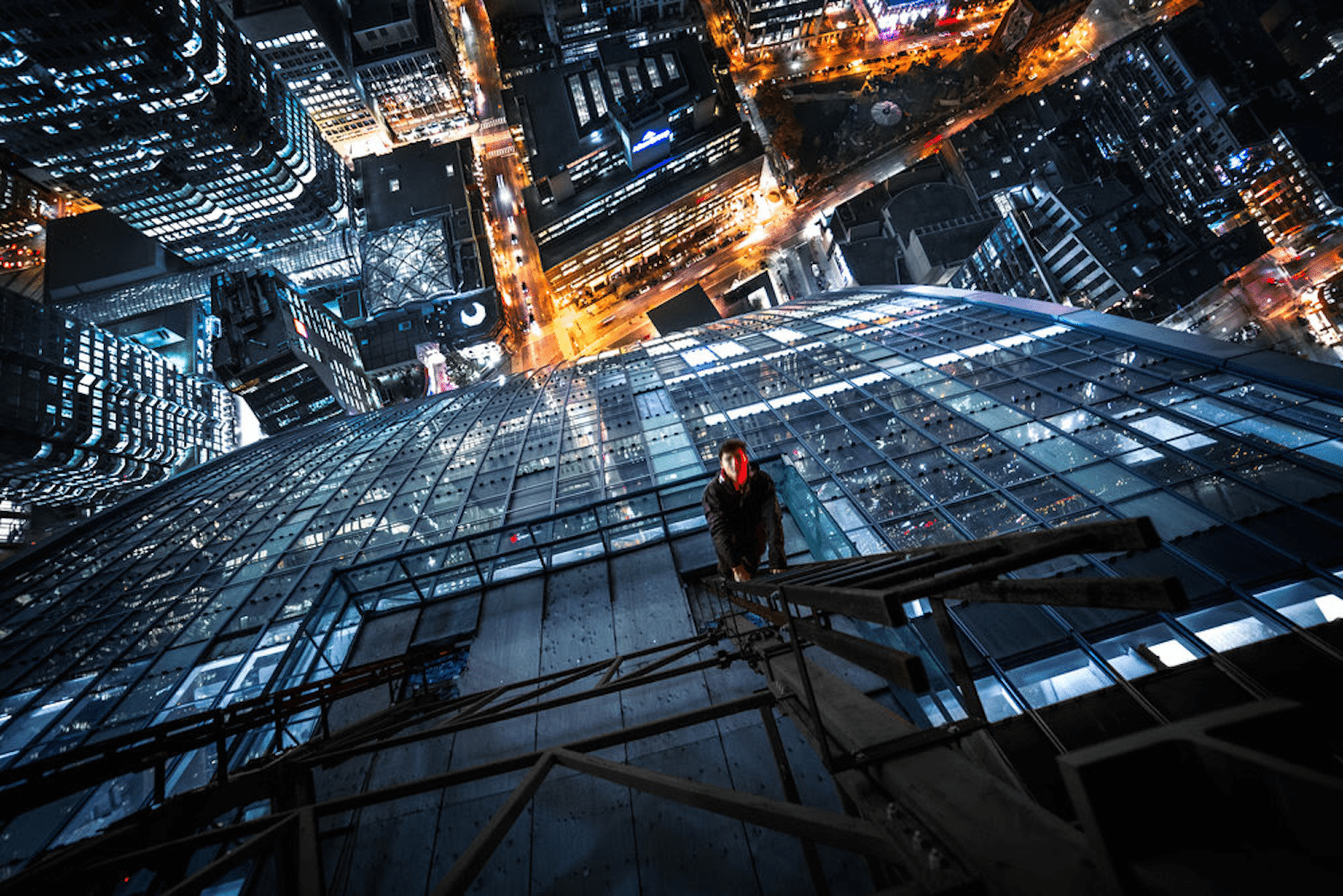 This sweat-inducing scene of Coutts’ friend at the top of the L Tower is a perspective few Torontonians will ever see firsthand, especially because the building is no longer under construction. “I’m a photographer, he’s an explorer,” says Coutts. “He’s curious about seeing the things that others can’t see.” Coutts decided not to join his friend on the ladder that night. 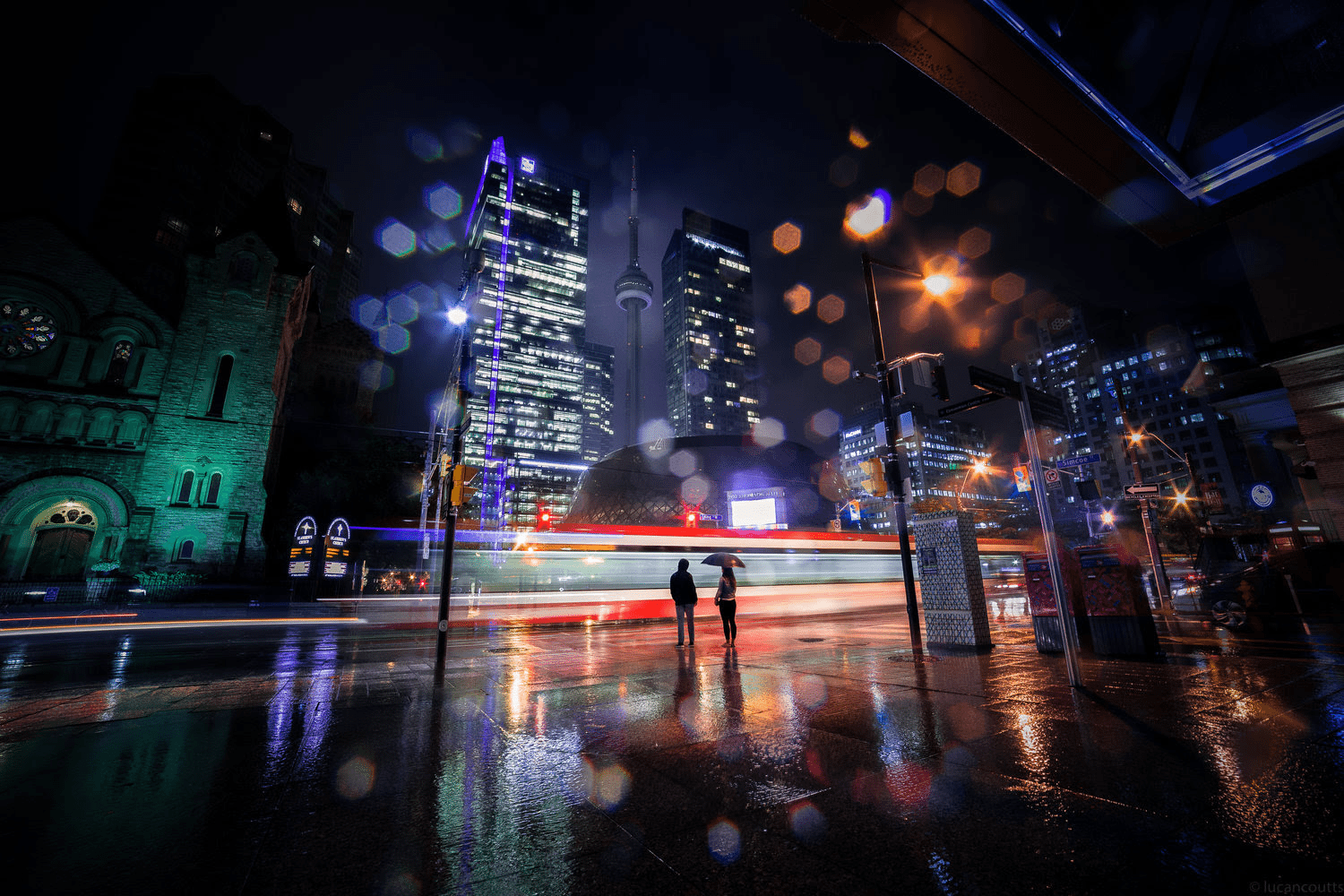 This image is a triple threat of Toronto landmarks: the CN Tower, Roy Thomson Hall and a TTC streetcar. “This will appeal to anyone who has ever lived in Toronto,” he says. “A lot of people tell me that my photos make them nostalgic.” 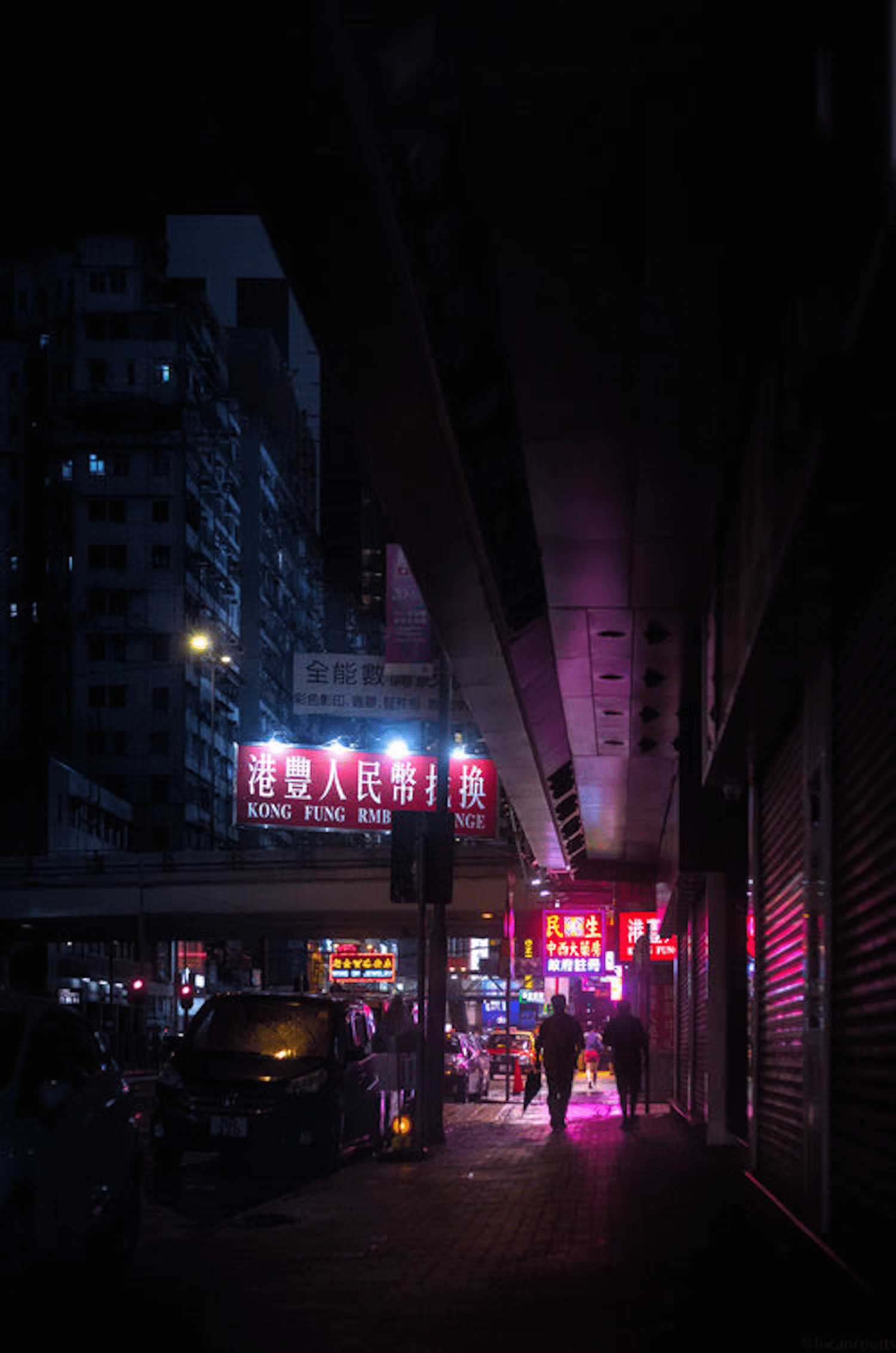 Coutts took this photo on a trip to Hong Kong, which is the only other city that he has shot so far. He wanted to capture pedestrians as small, silhouetted figures to reflect the way he feels when he’s surrounded by towering skyscrapers in a sprawling urban landscape.