Virtual roller coasters, fireside sessions with Neil Young and 10 other livestreams for self-isolation

Virtual roller coasters, fireside sessions with Neil Young and 10 other livestreams for self-isolation

More Toronto-bred artists and cultural fixtures are bringing their talents to your living room as physical distancing measures ramp up in Ontario. Here’s how to get your entertainment fix in self-isolation.

An acoustic set by the fire
1Neil Young, the legendary Toronto-born singer-songwriter, has launched a new online video series called “Fireside Sessions.” In the first video, released last week, Young moves around his Colorado property playing his classics and some deeper cuts. Filmed by his wife, Daryl Hannah, it’s an intimate and slightly bizarre 29 minutes that features a parody ad for water, “Earth’s finest product.” Weekly at NeilYoungArchives.com.

A pianist in his bathrobe
2On Tuesday, Rufus Wainwright, the iconic singer-songwriter-composer, announced the cancellation of six April and May concerts because of coronavirus concerns. But in lieu of the in-person shows, he’s launched a new Instagram Live series called Quarantunes. “Let this be part of the antidote to this situation that we’re in. Sending love,” he said during the first of now seven instalments. Daily on Instagram.

A folksy living room session
4Sarah Harmer, the Polaris-nominated singer-songwriter, cancelled a 22-date Canada-wide spring tour earlier this month. She’s now bringing part of that show to Instagram and Facebook this week. She’s keeping the set list flexible, taking requests (“or heckles,” she joked on Twitter), adding that they’ll figure out the format in real time. “I hope we can get together for some tunes and a few laughs in this surreal and tender time,” she wrote. The set begins March 26 at 8 p.m. on Instagram and Facebook.

Beats for the couch
5Canadian DJ and record producer Skratch Bastid recently postponed seven international shows. Now he’s set to be part of a growing crew of Toronto performers taking part in a crowdfunded livestream series called Urgnt Live. “I know the world’s in a real bad place… but I can make you dance (if you want me to),” he wrote on Instagram recently. Urgnt was originally meant to stream from empty venues around the city, but since Ontario announced the closure of non-essential businesses, the performances will stream from the artists’ own homes. Other performers include Mexican-Canadian songwriter Quique Escamilla, rapper Clairmont the Second, indie-rock duo Moscow Apartment and saxophonist Allison Au, all on Facebook or urgnt.ca.

A ballet lesson
6Learn to pirouette from the comfort of your living room with the National Ballet of Canada. Earlier this week, the company presented a class featuring principal dancers Heather Ogden and Guillaume Côté live from their home. This Wednesday, Nicholas Rose, who is part of the company’s corps de ballet, will be teaching beginner ballet live on social media this week. March 25 at 12 p.m. on Instagram.

Musicals in podcast form
7The Musical Stage Company has bumped up a planned summer initiative that turns a series of musicals into podcasts. Called “Reprint Rewind,” the theatre is releasing three 30-minute musicals produced through a 10-month residency program called Launch Pad. The first release is Fangirl, the story of an aspiring YouTube star who wants to meet her idol. The next two musicals will be released March 25 and April 1 on Soundcloud.

Actors face off online
8Monologue Slam Canada, a competition in which actors perform individually onstage before a panel of judges, moved online this month amid coronavirus concerns. Actors have been uploading short monologues, which will all receive feedback before three or four finalists are selected. The deadline for submissions is March 29 at noon. The videos are being posted on Instagram.

Thrill rides for the family room
9Canada’s Wonderland has resurfaced its collection of “POV” roller coaster rides online to help parents occupy their children during self-isolation. There are more than 30 different videos, from coasters to family rides. Are you a Leviathan thrill-seeker, or is the Fly more your speed? Pick your poison on YouTube. 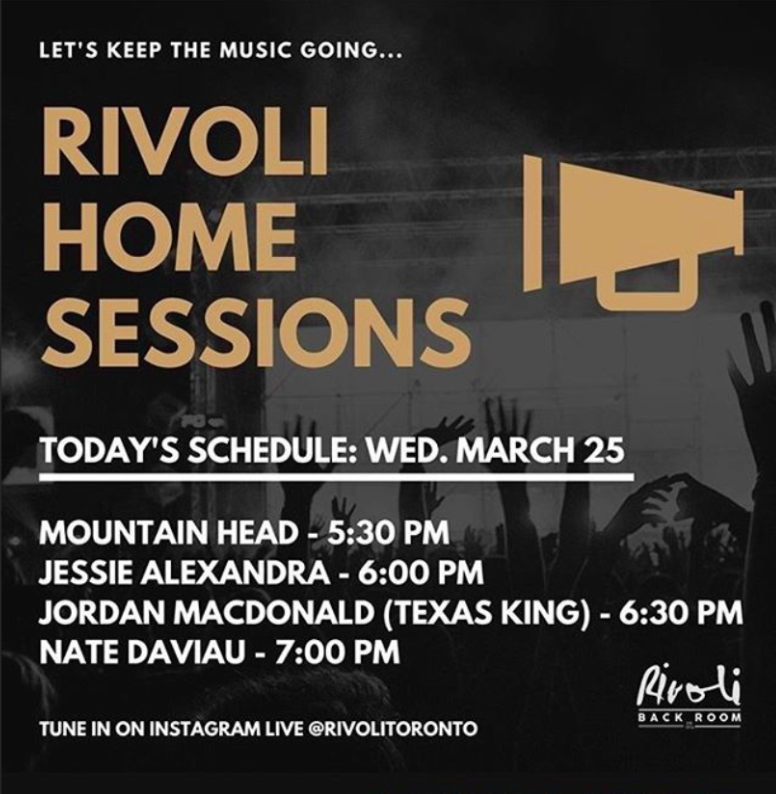 Back-room jams come to you
10The Rivoli, one of the city’s most iconic venues, has organized a new self-isolation series for the Rivoli Home Sessions. So far, the bar’s Instagram account has hosted seven days of music, sometimes featuring multiple artists a day. March 25 on Instagram: Mountain Head, Jessie Alexandra, Jordan Macdonald and Nate Daviau. 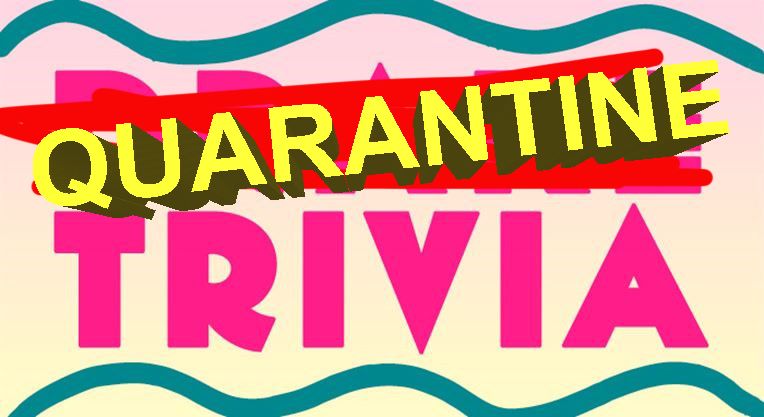 Trivia night at home
11Drake Hotel staples Megan Griffith-Greene and Jeromy Lloyd are bringing their hosting skills to the Internet with Quarantine Quizzo. “This will be online: three rounds, teams of four or fewer, we play for glory,” they wrote on Facebook. March 25 at 8 p.m. on Facebook.

Stages to living rooms
12TO Live has closed all three of its theatres in the city including the Meridian Hall, but they’re sharing the works of a variety of artists online with a new series called “Living Rooms.” So far, they’ve released five episodes, including concerts from Afro-Cuban duo OKAN, South Sudanese performer Emmanuel Jal and Salvadorian-Canadian dancer Irma Villafuerte, all available on YouTube.