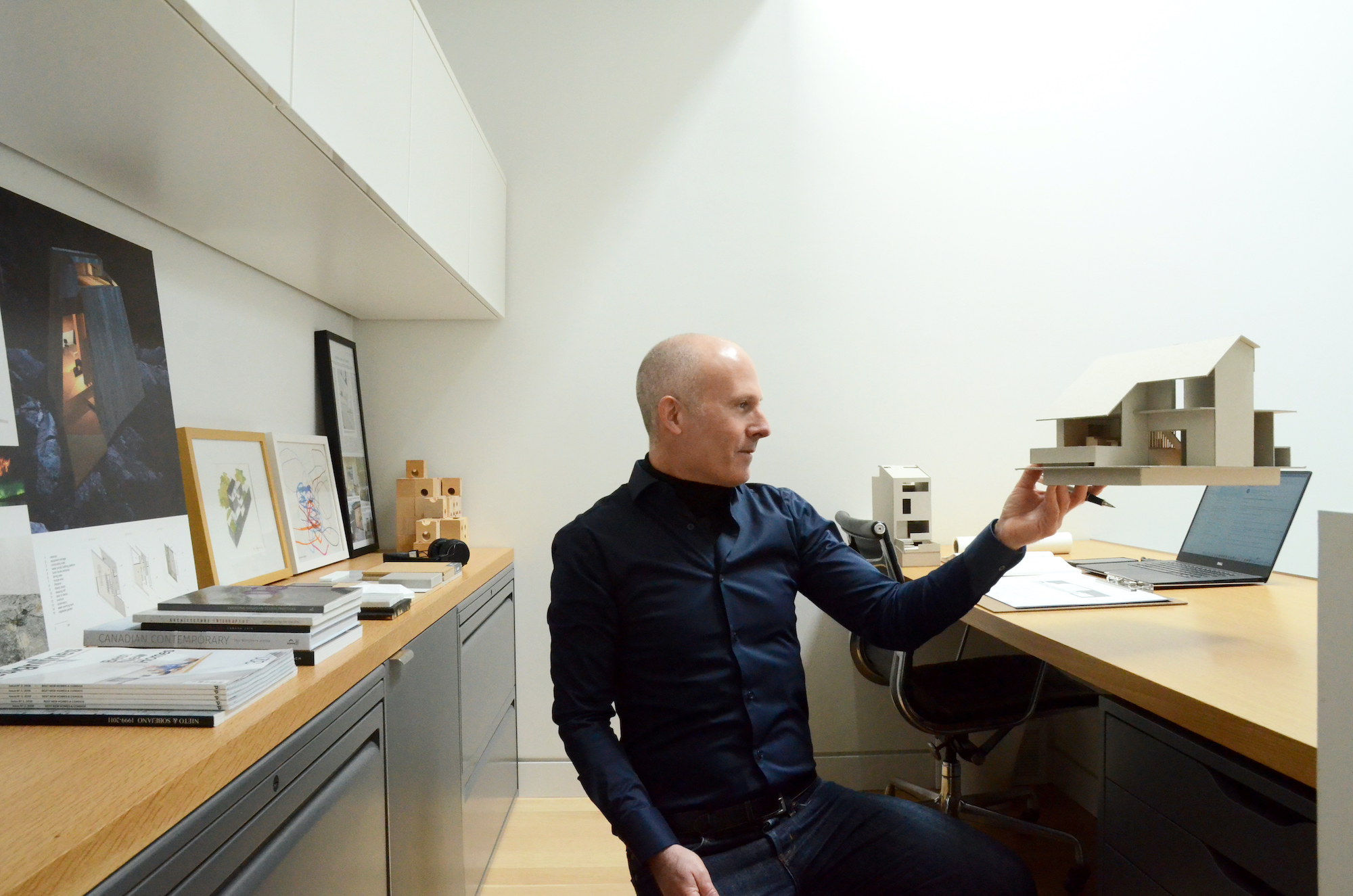 In 2003, Rick Galezowski and Maggie Bennedsen—he runs the architectural firm Great Lake Studio, she’s an architect with Kohn Shnier—set off on an epic bike trip, riding from Inuvik to Argentina while living in a tent for two and a half years. “It was fantastic,” says Galezowski. “Returning home was a strange experience. After spending so much time outdoors, interior spaces felt small and claustrophobic, but also luxurious beyond belief.”

They had their son, Levi, in 2013, and three years later, Galezowski and Bennedsen bought an 1,800-square-foot, two-bedroom Trinity Bellwoods semi. It was in a shambles, with a rotting exterior wall that was sinking and leaning away from the house. So they razed the structure and designed its replacement, constructed by Catalyst Design Build. Now, the three-storey vertical split-level house breaks the home into five areas, with the kitchen and library on the lowest level, a living space on the upper level and the office and bedrooms in the middle. 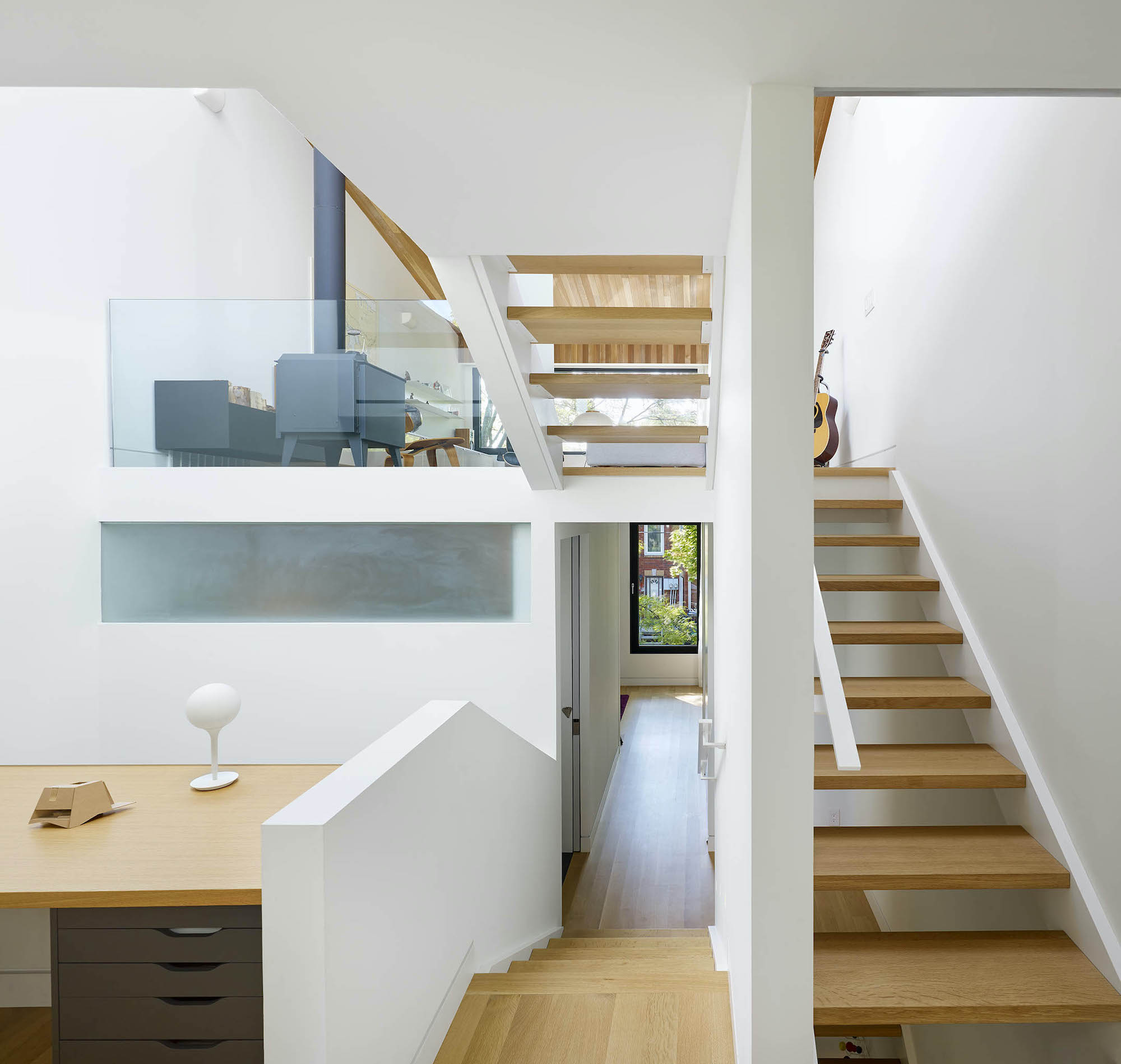 Home offices are often tucked away, but Galezowski’s studio is deliberately open, and he has worked from the space ever since they moved in. He likes that his family is never far away—you just have to call out to talk to someone. At eight feet wide, the small but efficient room has a desk that runs its full length, a credenza, and wall-mounted cupboards for reference books. Levi, who’s now seven, likes to colour discarded plans in his dad’s office, or he and his dad will fiddle with a marble run Galezowski keeps in his studio. Galezowski designed two metre-wide skylights to bathe the entire house in natural light without sacrificing privacy. “At twilight, the space fills with golden-pink light,” says Galezowski. “Rain has a whole other effect. It’s a lovely space to be in through the day.”

The eight-foot-long white oak desk was custom made by millworker Gibson Greenwood. If you peer over the table ledge, you can see what’s cooking for dinner in the kitchen below. “I’m often asked if I lose things over the edge, but I don’t,” Galezowski says. “The desk has an inset aluminum pencil trim that’s subtle but effective”: 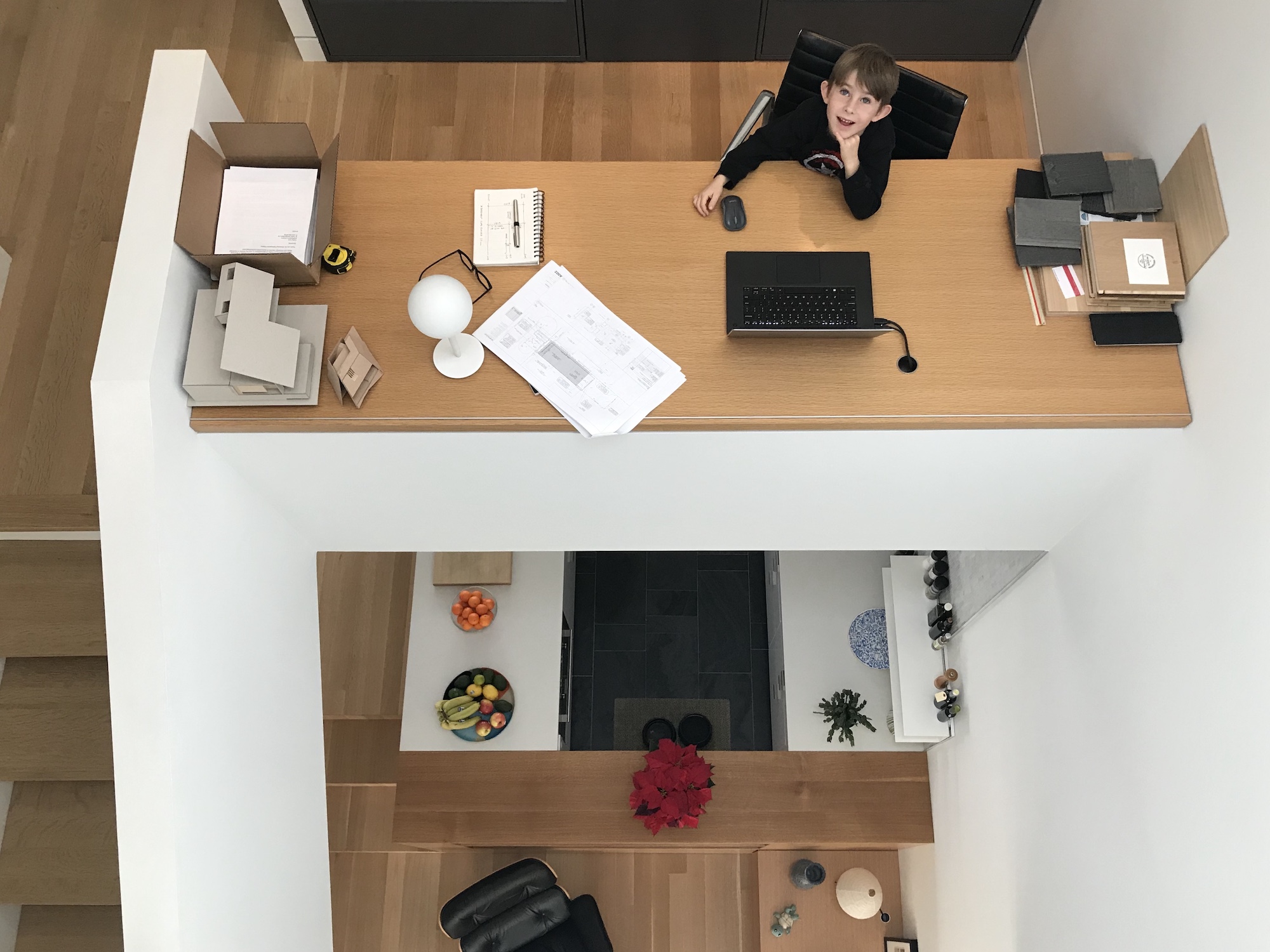 In the early stages of a project, Galezowski often sketches with watercolours. The framed one below, next to one of Levi’s masterpieces, is of his home: 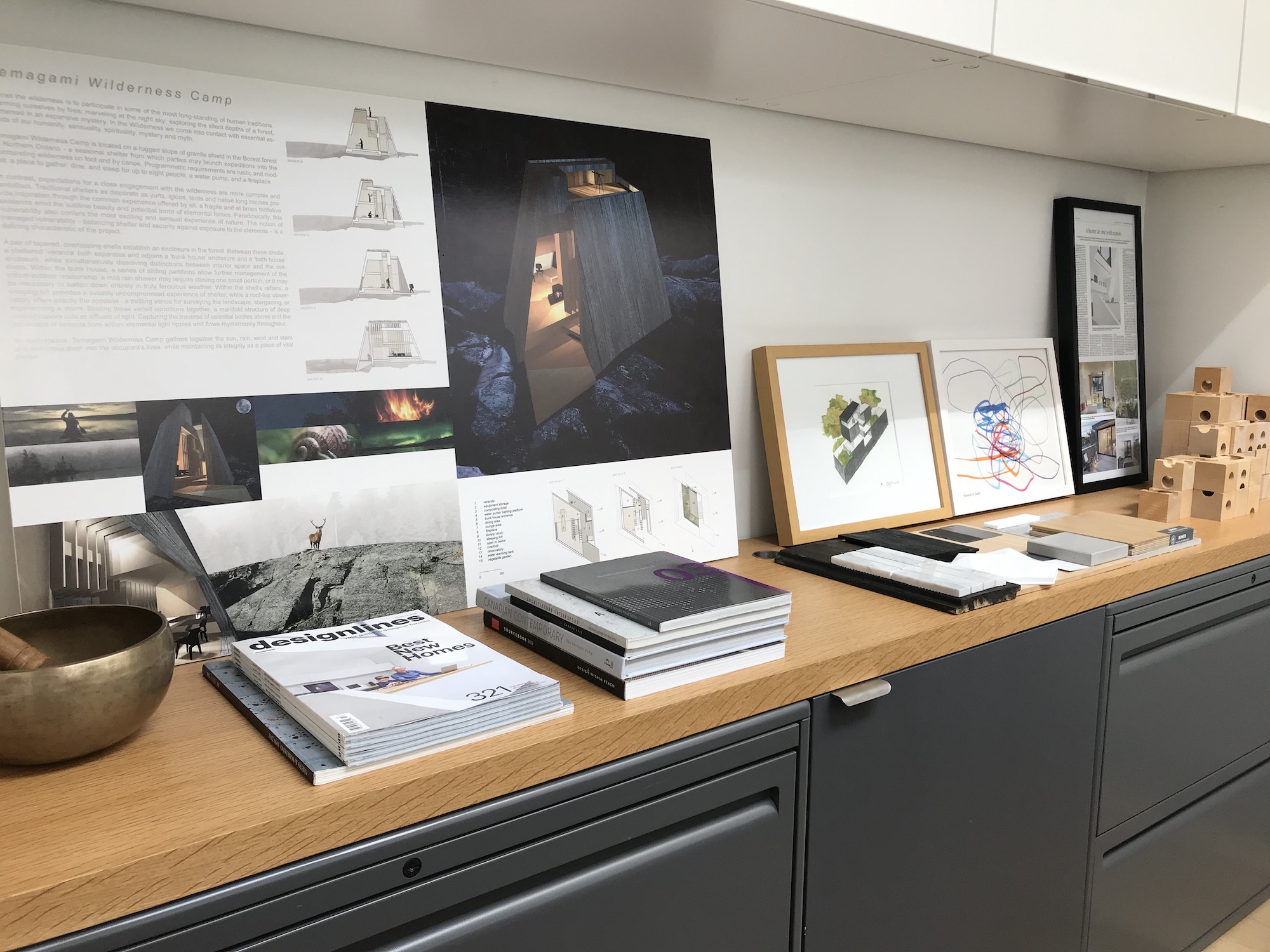 The bronze Tibetan singing bowl is a souvenir from the couple’s travels. And Galezowski liked the simple, quiet elegance of the Castore light so much, he bought two. “We have the large pendant version above our Saarinen dining table,” he says. “It’s just beautiful”: 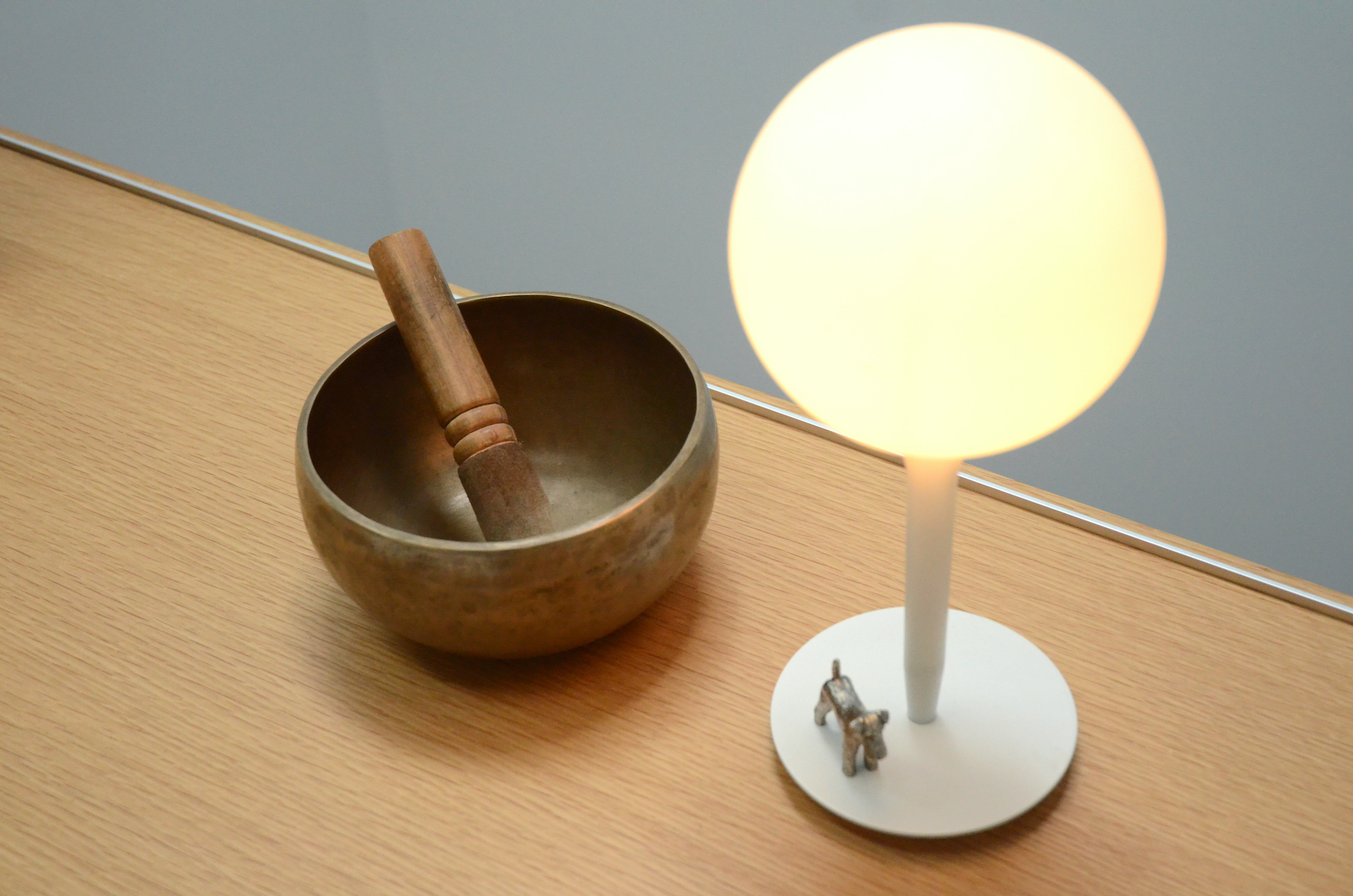 The skylights above his desk are mood-enhancers. “The area is insulated from street noise and distraction. It’s peaceful and meditative.” 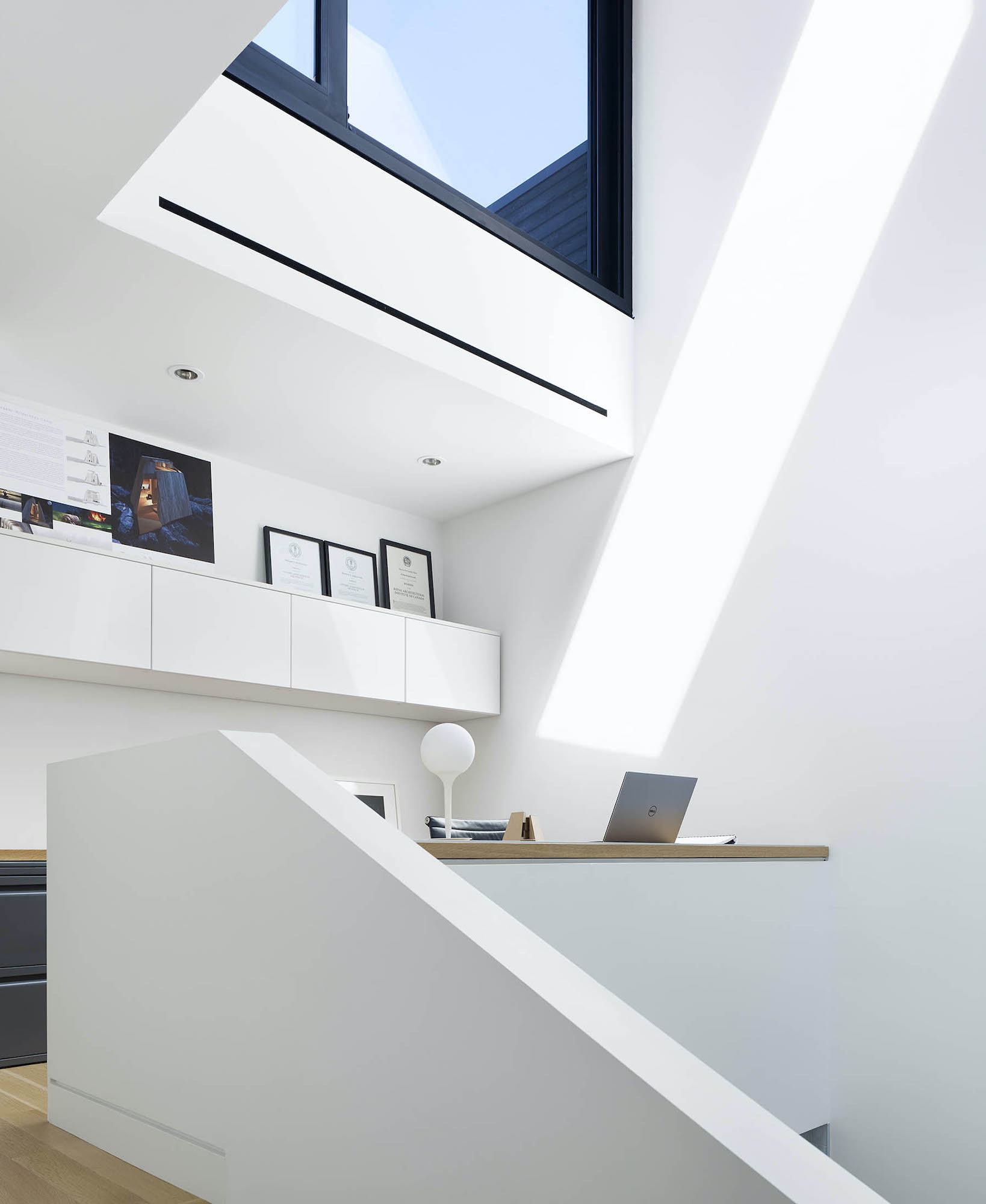