A corner unit in a 1903 building that was once a factory for train parts.

One distinctive feature of living in a former factory space: huge windows everywhere. The selling agent says the windows do have motorized blinds. The owners carved out a little office nook under the stairs: The kitchen countertops are quartz: There are two bedrooms on the second floor. The door to the left is decorative. The owners got it from Egypt: The four-poster bed in the master bedroom reaches almost all the way up to the exposed metal beams. The master bathroom has a soaker tub: After sitting empty for a quarter-century, this huge foundry warehouse was granted heritage status in 2004 and converted to 104 industrial loft apartments in 2006. A couple who lived in a smaller unit a few doors down bought this place in 2013, because they loved the building so much they didn’t want to leave.

Unlike most industrial lofts, this one actually has a patio. As beautiful as the unit is inside, the surrounding neighbourhood is mostly stacked townhouses, and there isn’t much retail in walking distance. The neighbourhood does have one definite redeeming quality, though: Earlscourt Park. 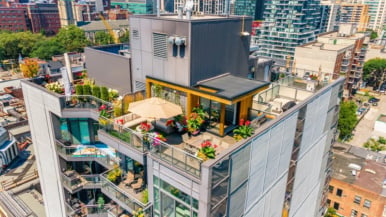 Featuring an 800-square-foot terrace, an outdoor kitchen and a custom spiral staircase