This couple wanted to upsize. But first, they needed to get creative and sell their condo

This couple wanted to upsize. But first, they needed to get creative and sell their condo

The history: Keith grew up in Scarborough, then moved to Pickering with his family after graduating from high school. He studied at Ontario Tech University (then called The University of Ontario Institute of Technology) while living at home with his parents.

Then, in 2011, he moved to Toronto to work as a software developer, renting a 900-square-foot, one-bedroom condo at Cityplace, for $1,750 a month. He loved entertaining and had a lot of parties. In 2014, he met Ruth-Anne and they began dating. At the time, she was living with her parents in Markham.

The couple continued dating while Keith moved between rentals in Etobicoke and at Bay and College. In 2017, Keith bought a 653-square-foot, one-bed condo at King and Sherbourne for $412,000. The condo was in an older building and hadn’t been renovated since the early 2000s. So over the years, Keith renovated the kitchen countertops, kitchen cabinets and bathroom, spending $20,000 in total.

In November 2019, Keith listed his condo with the goal of buying a larger place so that Ruth-Anne could move in. He was hoping to get $635,000, but the highest offer he received was $580,000. He figured he’d try relisting in the spring when the market was busier. But then the pandemic hit.

In March 2021, Keith decided to redesign his condo so that it could accommodate a couple living together.

He also figured that the design updates would help increase his sale price once he was ready to list again. At the time, both Keith and Ruth-Anne were working from home, so he’d need to create two workplaces where they could each take calls without disturbing each other.

His condo had a loft-style layout with an interior bedroom that was partially open to the living room. So he put glass in the opening, along with a glass door, to make it more soundproof. Keith also installed a murphy bed that could be raised during the day for Ruth-Anne to work. In the living room, Keith added built-in shelving to increase storage space, and a desk nook where he’d work during the day. 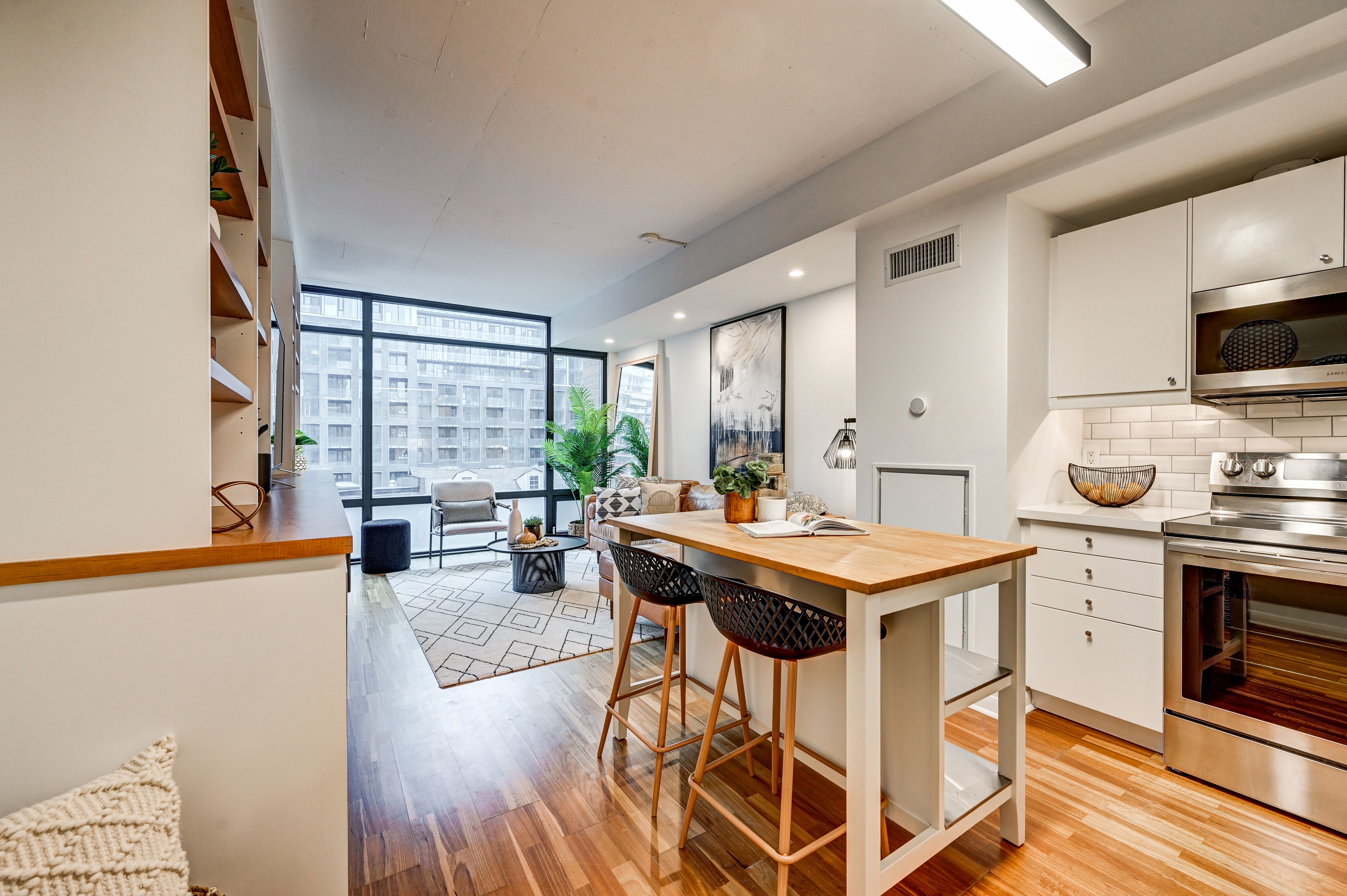 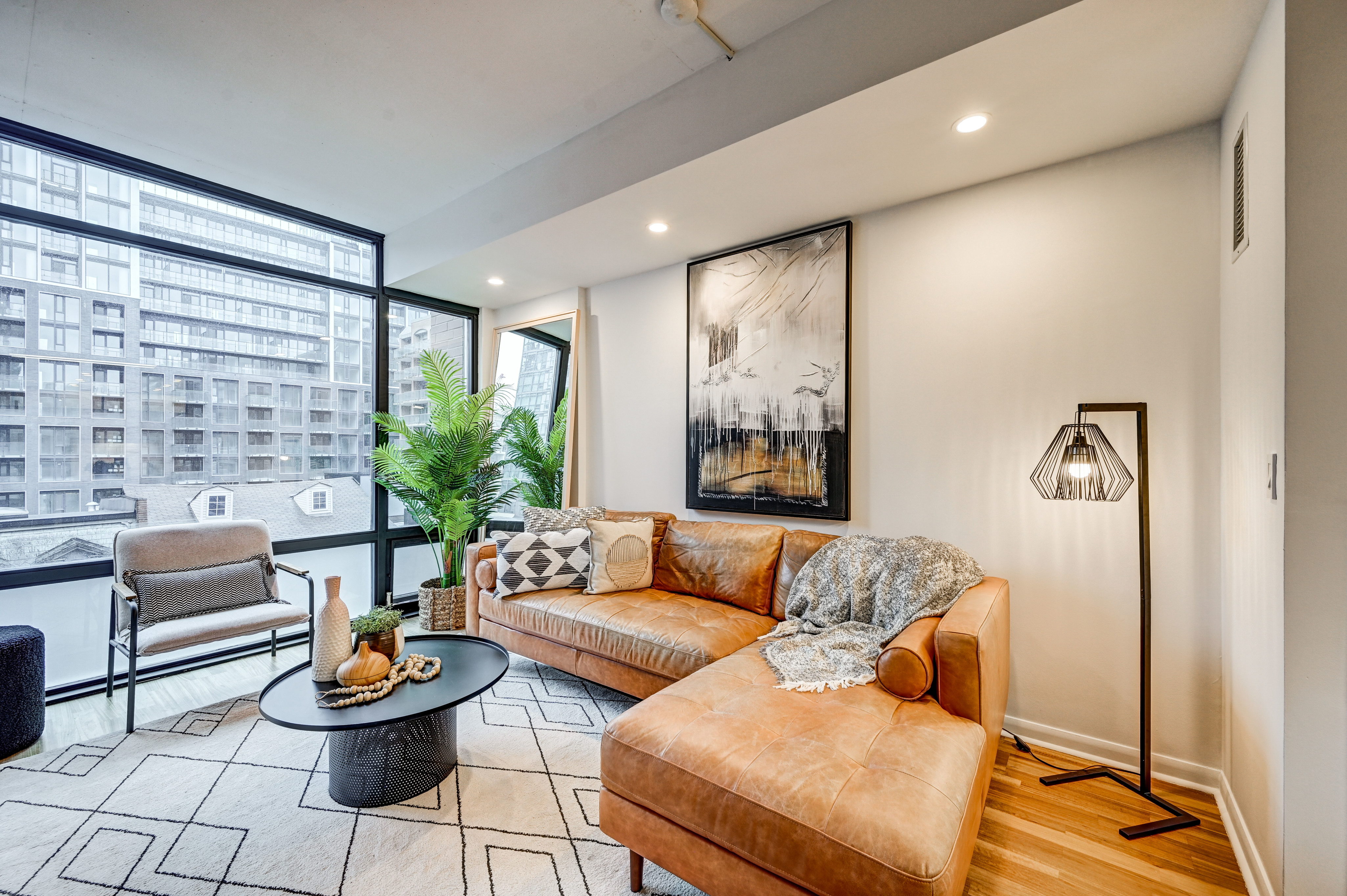 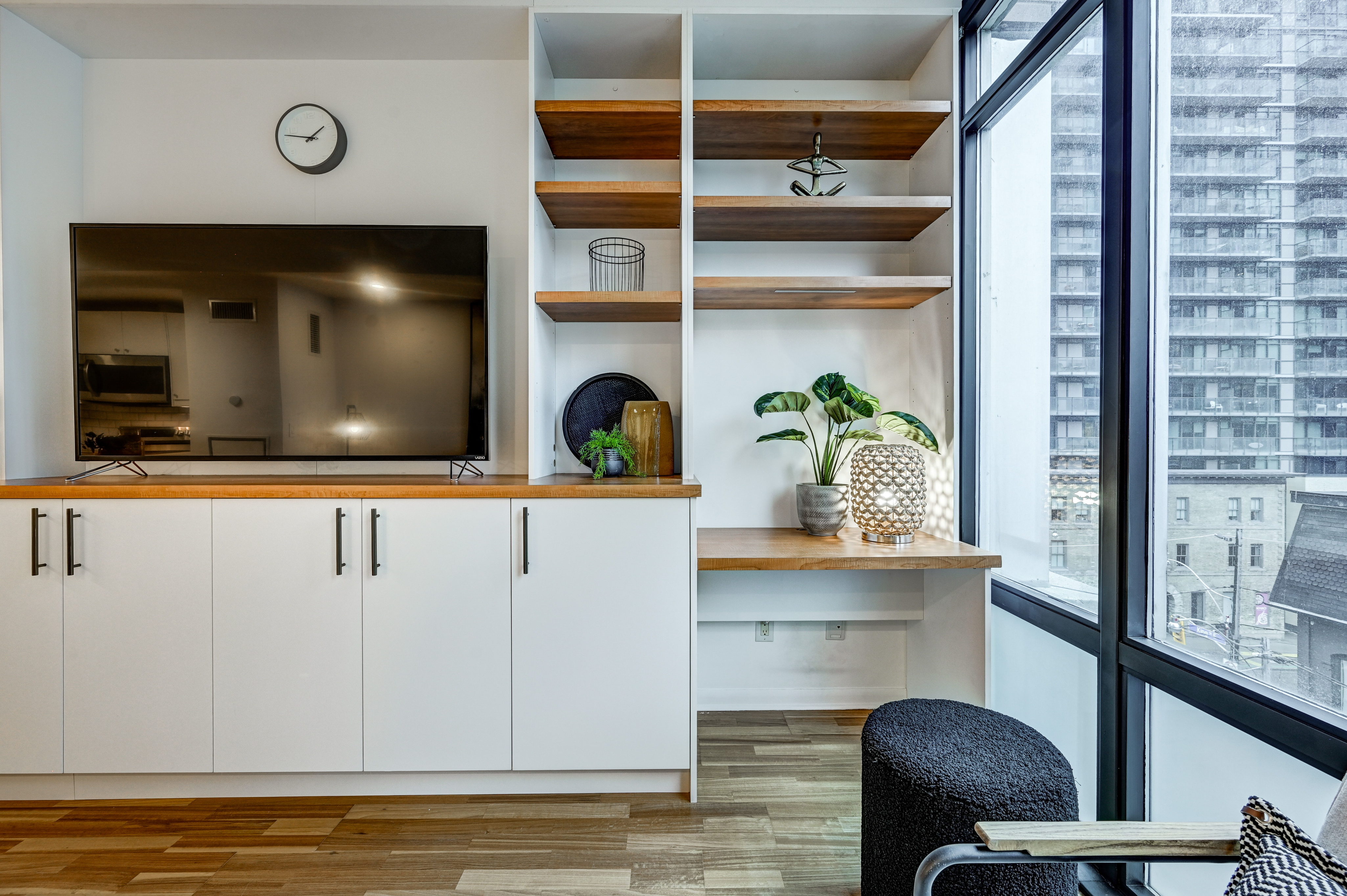 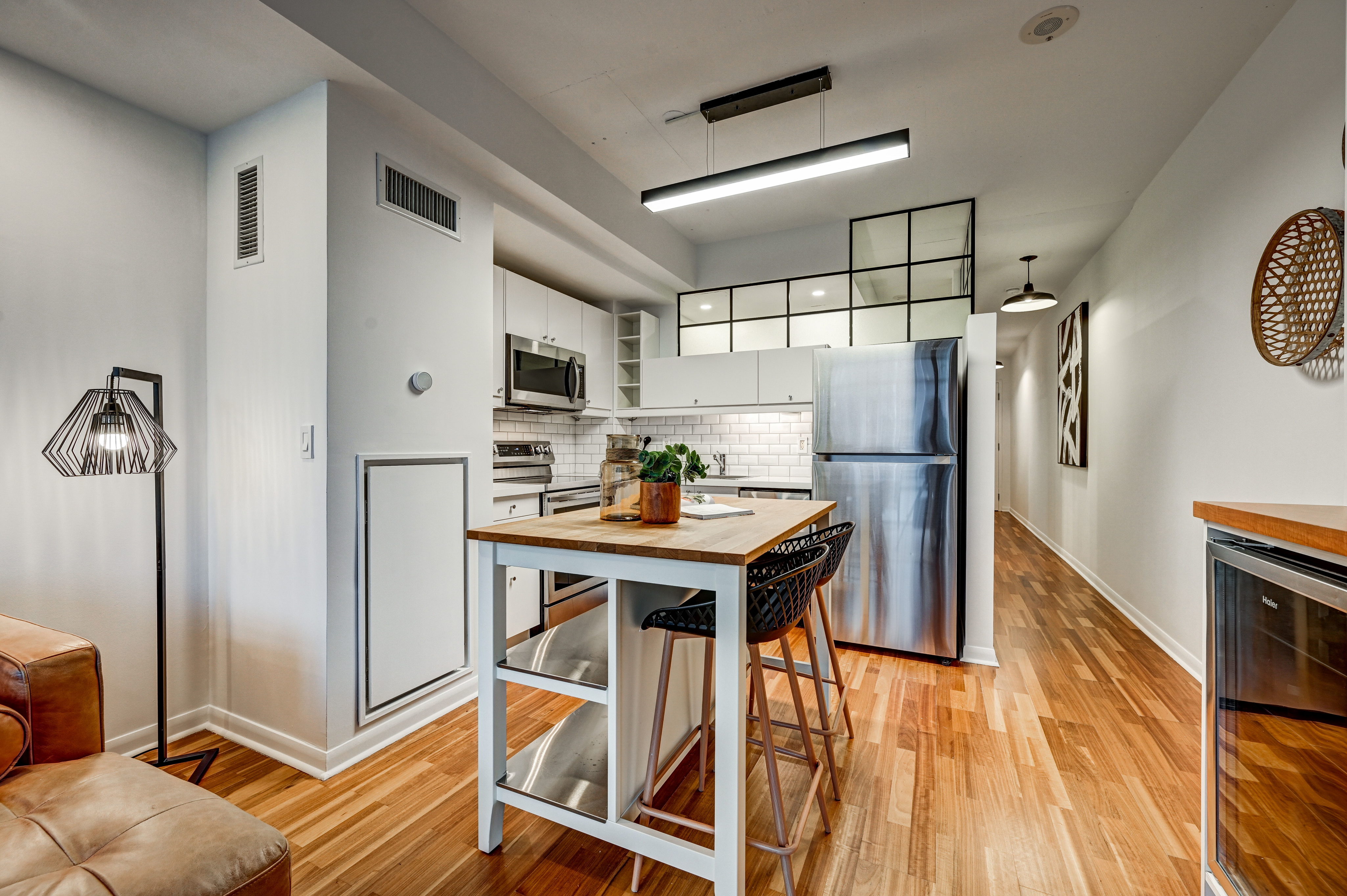 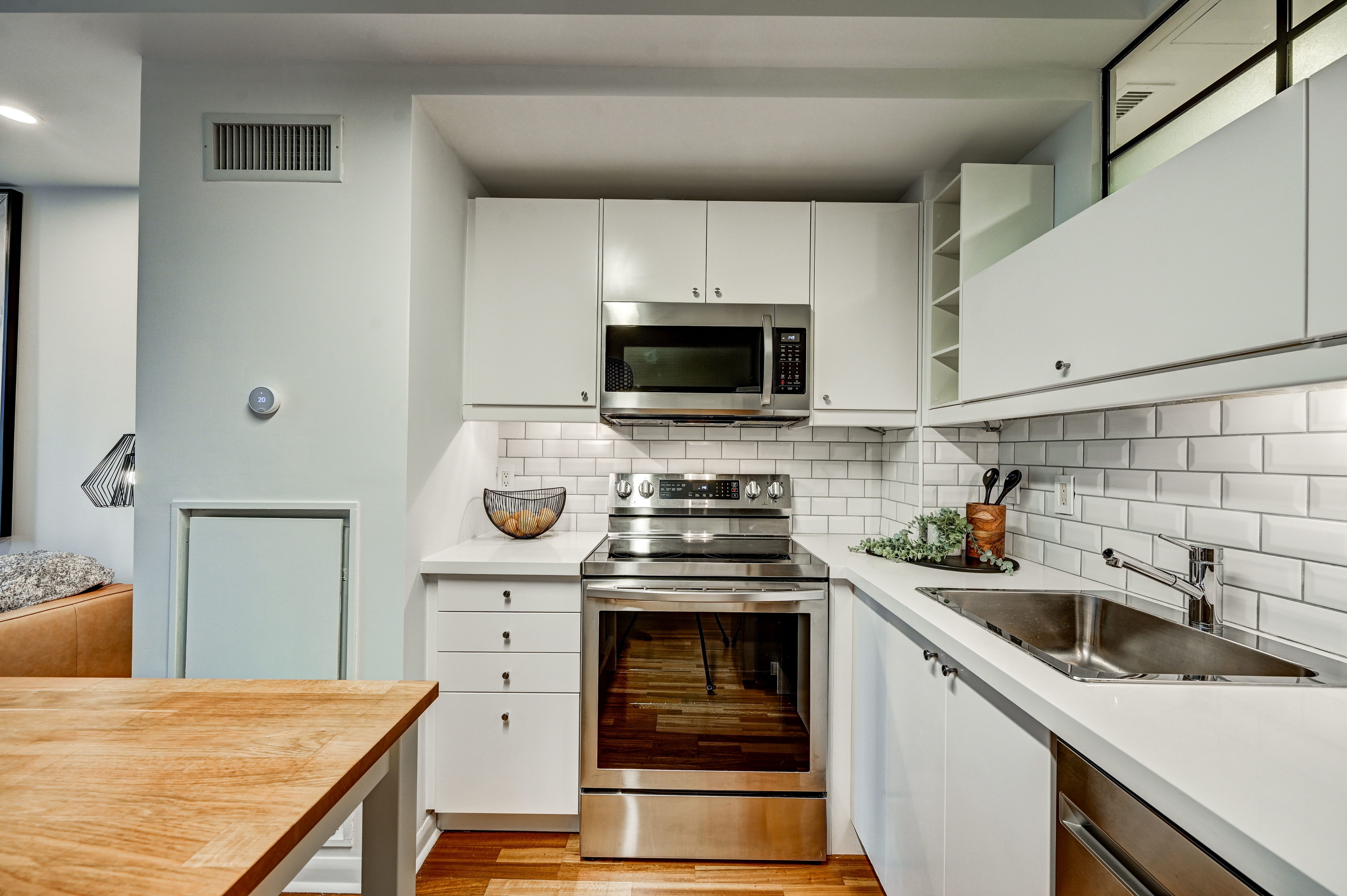 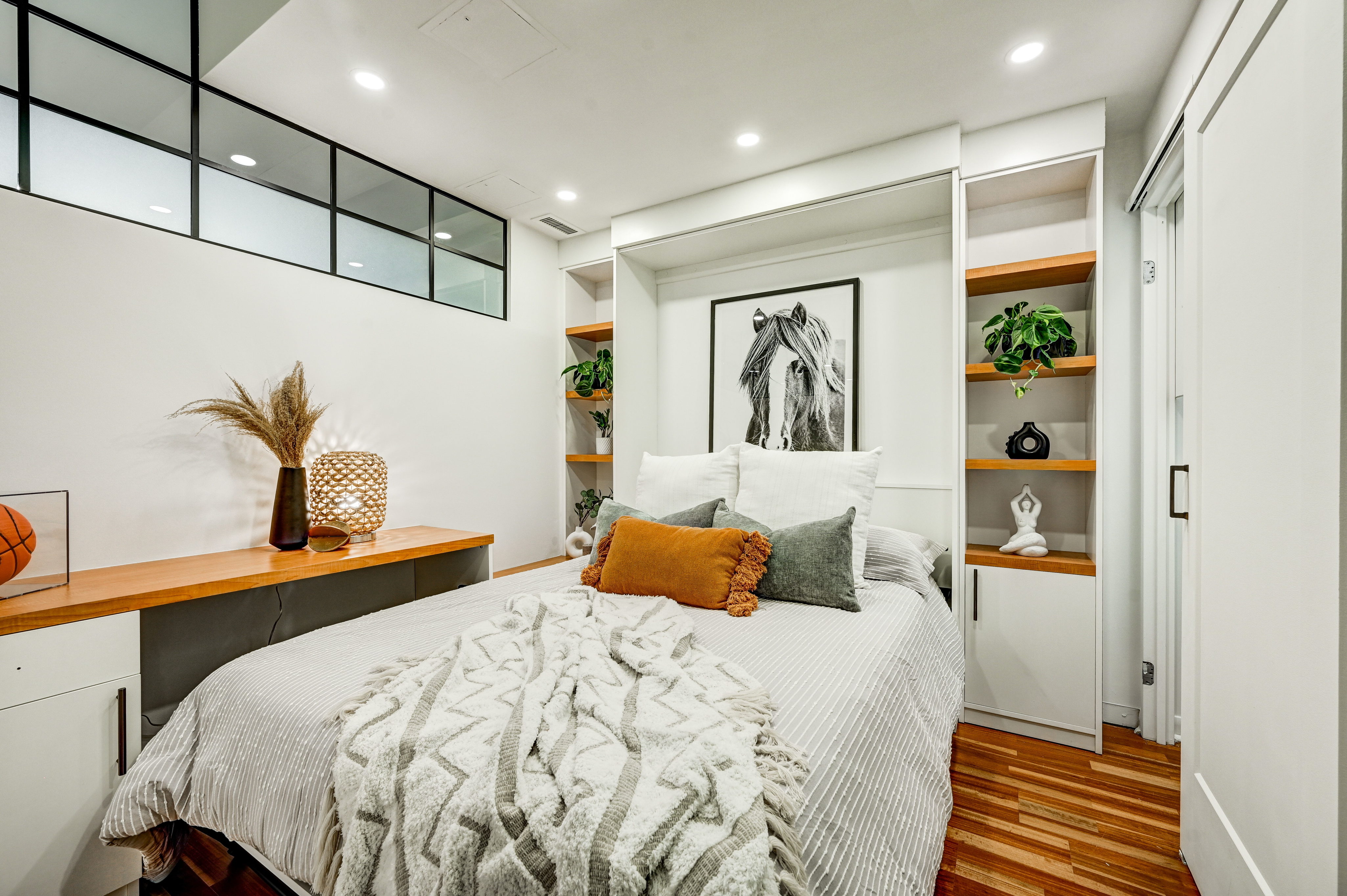 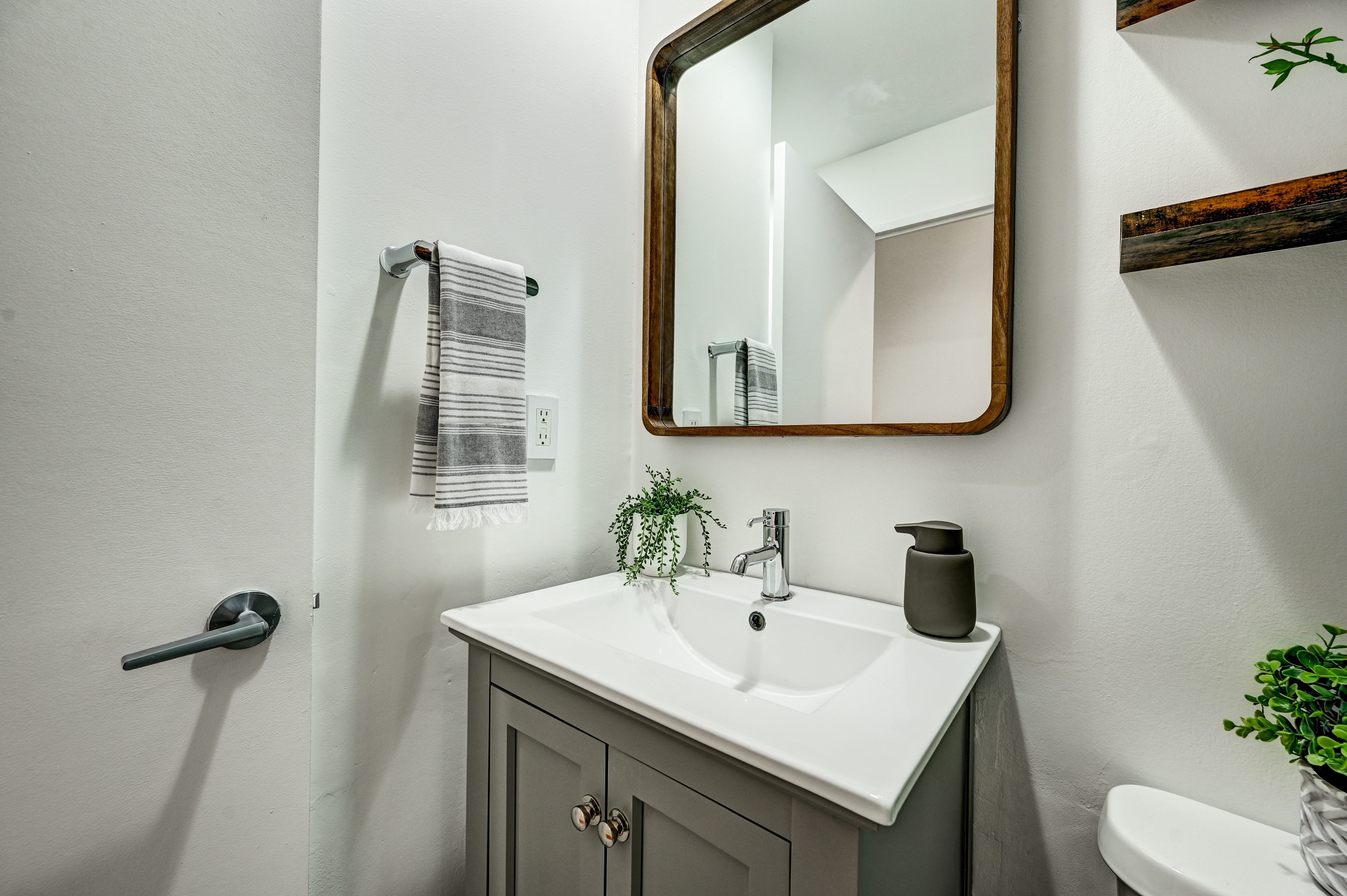 Ruth-Anne moved in with Keith in May 2021. The space worked well for them, but by February 2022, they were eager to upgrade to a larger condo or a house. Keith and his real estate agent figured that spring 2022 would be a good time to list again.

They loved being close to bars and restaurants in the core, and Ruth-Anne wanted to be close to her office at Church and Wellesley, as her workplace was returning to a hybrid model. While the condo was being staged, Keith and Ruth-Anne moved into a temporary rental downtown, where they’d stay until they found a new home.

Keith quickly realized that his budget couldn’t afford them a house in their desired area, so the couple focused on condos instead, adjusting their budget to $1,000,000. They were looking for something over 900 square feet with two or three bedrooms and one or two bathrooms. Keith liked the idea of an older unit that he could renovate to increase its value.

In early March, Ruth-Anne and Keith saw a two-bedroom, split-level loft at Front and Portland listed for $799,999. They considered submitting an offer, but heard that there was a lot of competition for the unit. They figured it would go for over $1 million, so they decided not to place a bid. A few days later, they learned that the unit sold for $931,000. They regretted not putting in an offer.

A couple of days later, in mid-March, Keith and Ruth-Anne saw a similar two-bedroom, split-level condo online listed for $950,000 in the same older boutique building. It had a similar layout to the unit they had seen previously, except it had a powder room on the main floor and a parking spot was included.

The condo had a small hallway that led to the powder room and a closet.

The main floor also had a spacious living room, dining room and kitchen, with a large balcony space that Keith and Ruth-Anne loved.

Behind the kitchen, there was a storage room with laundry. Upstairs, there were two bedrooms and a full bathroom.

The unit had a view of the CN Tower and the Rogers Centre, which the couple loved. There was also a gym in the building, which Keith could use for his workouts.

The unit was outdated and needed renovating, but Keith liked the idea of tackling another design project. He envisioned removing the front hallway closet to expand the kitchen, replacing the upstairs carpeting with hardwood, creating a reading nook in the upstairs hallway and installing built-in shelving throughout, along with renovating both bathrooms and the kitchen.

Having missed out on the previous unit, Keith jumped into action quickly. That afternoon, in an effort to show the sellers that he was serious about the purchase, he submitted an offer of $943,000, conditional on an in-person viewing. Keith saw that the seller had purchased the unit for $343,000 in 2009, so he figured they might like having an even $600,000 profit from the sale.

After viewing the condo in person that evening, Keith removed his only condition from his offer. The sellers countered with $950,000, the original listing price. Keith agreed with a closing date of April 28.

The outcome: Keith and Ruth-Anne are excited about moving into their new condo. Keith loves pizza and is planning to get a pizza oven for their balcony since the building permits outdoor barbecues.

Keith will use the second bedroom as an office. Ruth-Anne hasn’t decided whether she’ll work downstairs in the living area or upstairs in the main bedroom.

As for renovations, they plan to live in the condo for about a year to see how they can best optimize the space. Keith plans to spend about $100,000 on the renovation.

Meanwhile, the couple is excited to continue living downtown. They’re most looking forward to entertaining large groups of friends again, which is something Keith hasn’t been able to do in years. They anticipate that their new home will become a gathering spot for friends to meet up before going out in King West.

Keith and Ruth-Anne plan to live in the condo for three or four years. After that, they plan to sell and upgrade to an old Victorian home in Toronto. They envision themselves in a three-bedroom house so that both can have their own offices, plus a finished basement space so that they can keep hosting parties.