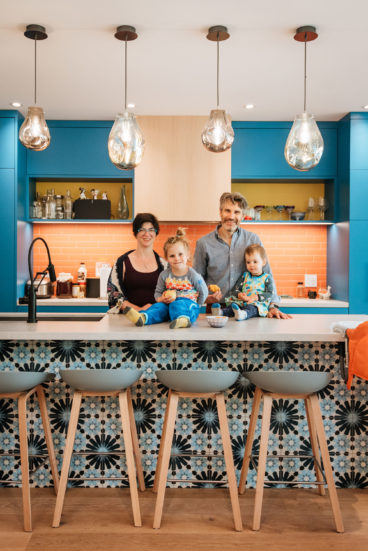 In this colourful Playter Estates home, every day is happy hour

The people: Kelly Swartz, a sex coach at Awoken Beauty; her husband, Andrew, founder of communications company Ten Days Later; and their kids, Solal, Annabella and Danielle (not pictured).

Andrew and Kelly met in New York City in 2014 and fell hard and fast. Andrew was working at Google at the time, and Kelly, who’s originally from Mexico City, was doing her PhD in comparative literature at CUNY. Ten days later, Andrew proposed (his company name is an homage to their speedy courtship). Their wedding was as colourful as they are. Bridesmaids were basically given carte blanche, and kids were encouraged to dress as superheroes and princesses. One cousin arrived wearing a kilt and sword, with his face painted like Mel Gibson in Braveheart.

Within a couple of years, they had one baby at home and another on the way, and decided to move to Toronto, Andrew’s hometown. They found a house in Playter Estates for $1.7 million. It was built in 1919 and had dark-stained wood and stuffy carpets, but it also had great bones, and they knew they could mould it to fit their whimsical sensibilities. For a quick fix, they tore out the old carpets and painted the walls in greens, oranges and yellows.

By 2018, Kelly was pregnant with their third child, and they brought in Heather Asquith of Asquith Architecture and Julie Reinhart, an interior designer, for a proper full-scale gut job while the family rented a house in Leslieville. They extended the second storey at the back of the house and added loads of storage to help organize a family of five. The millworker who crafted their multicoloured cabinetry thought they were crazy at first, but eventually came around.

Now, the kitchen is the focal point, with light pouring in through floor-to-ceiling windows. While living with so much colour might seem chaotic to some, Andrew says they never considered what other people might think. “We didn’t do this to sell the house. We did this to enjoy it. We want our kids to be surrounded by life and colour and fun.”

The couple opted for upholstered, modular living room furniture to keep things soft and flexible: “It’s an odd room and using round or curved furniture made the most sense in there”: 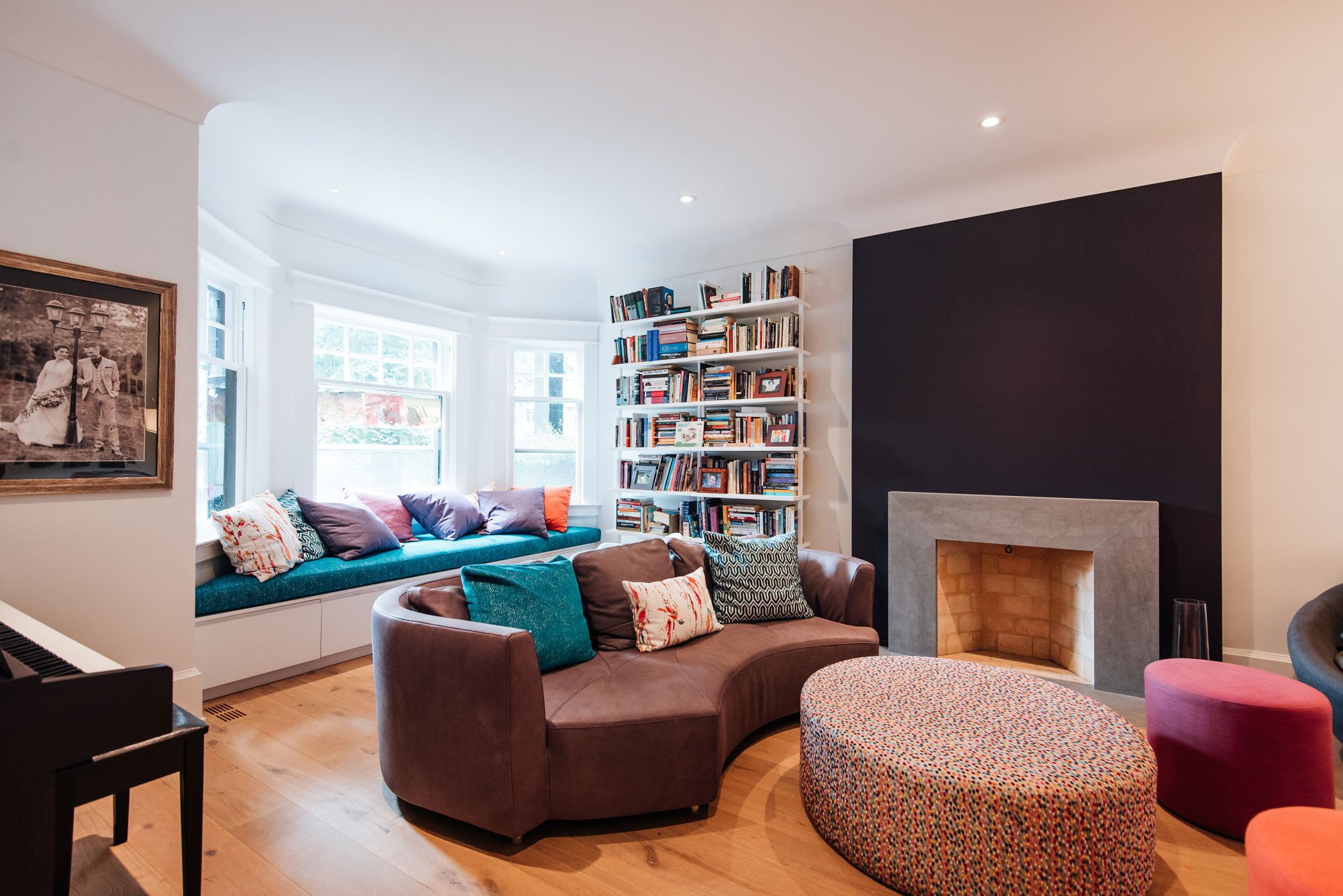 One entire wall of the living room is devoted to family portraits: 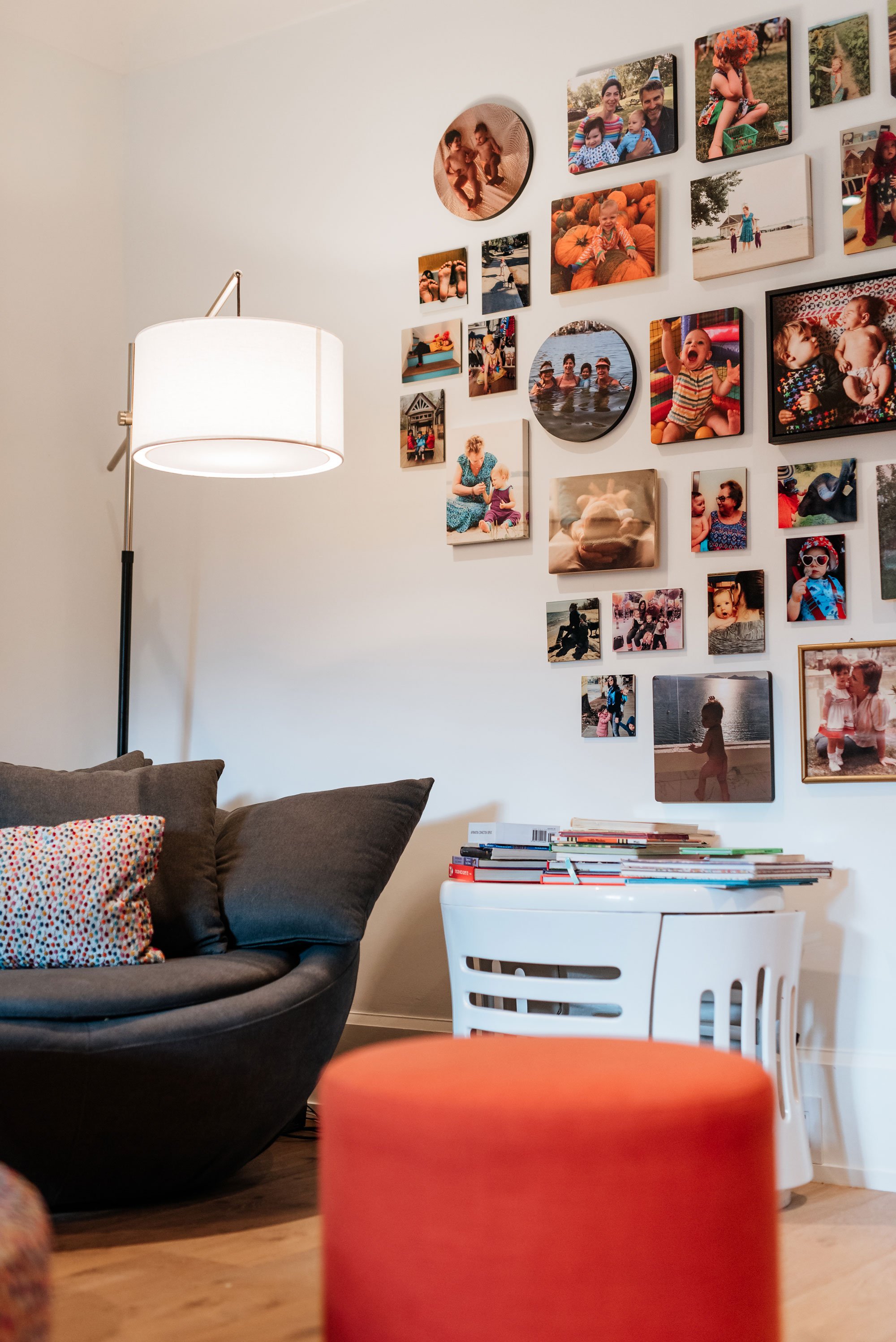 Julie Reinhart designed the dining table with a quartz top. It can seat 10, but the curved bench tucks neatly underneath so the kids have room to run indoors: 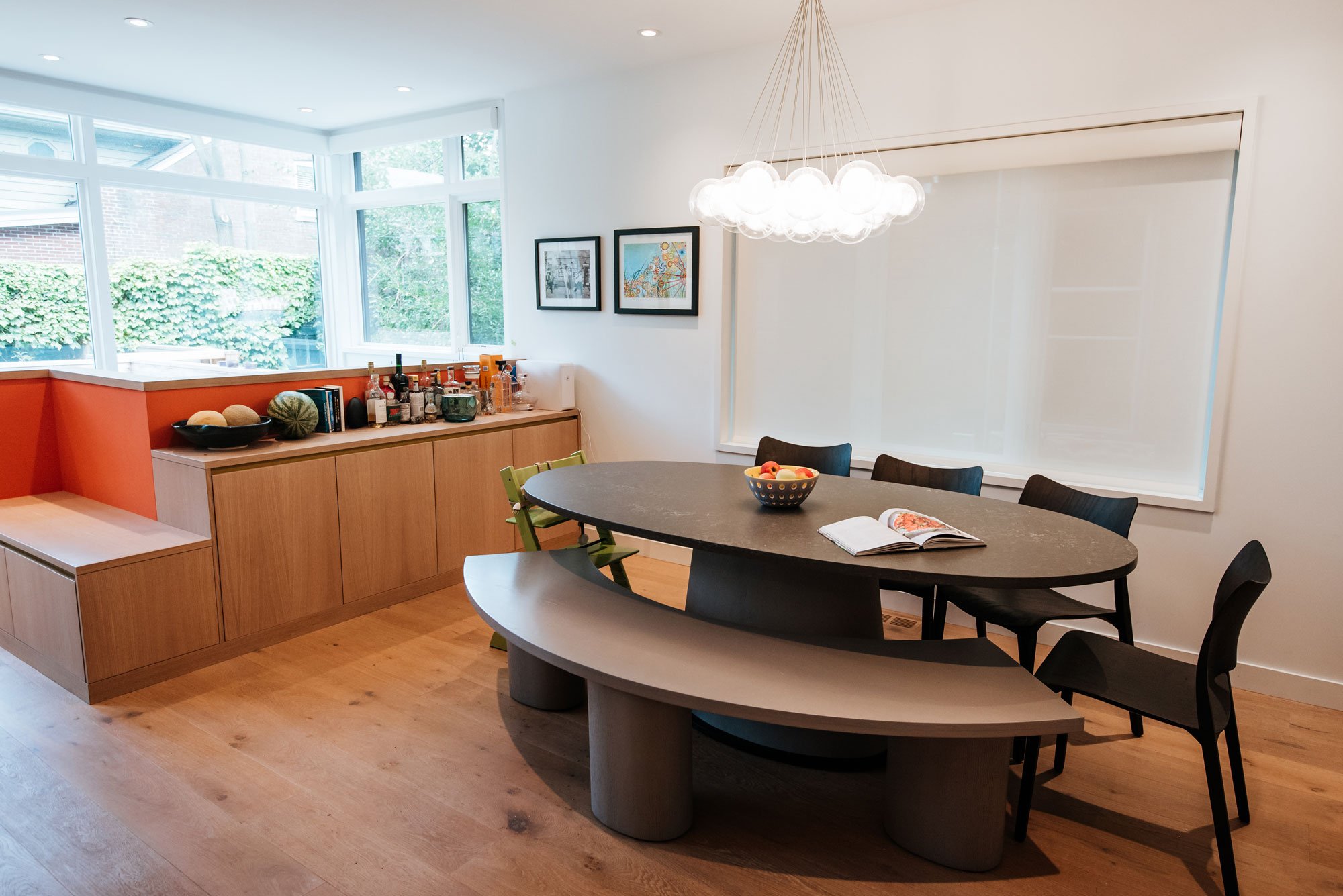 In Kelly’s office, the butterfly garden wallpaper from Osborne and Little makes a snazzy Zoom backdrop: 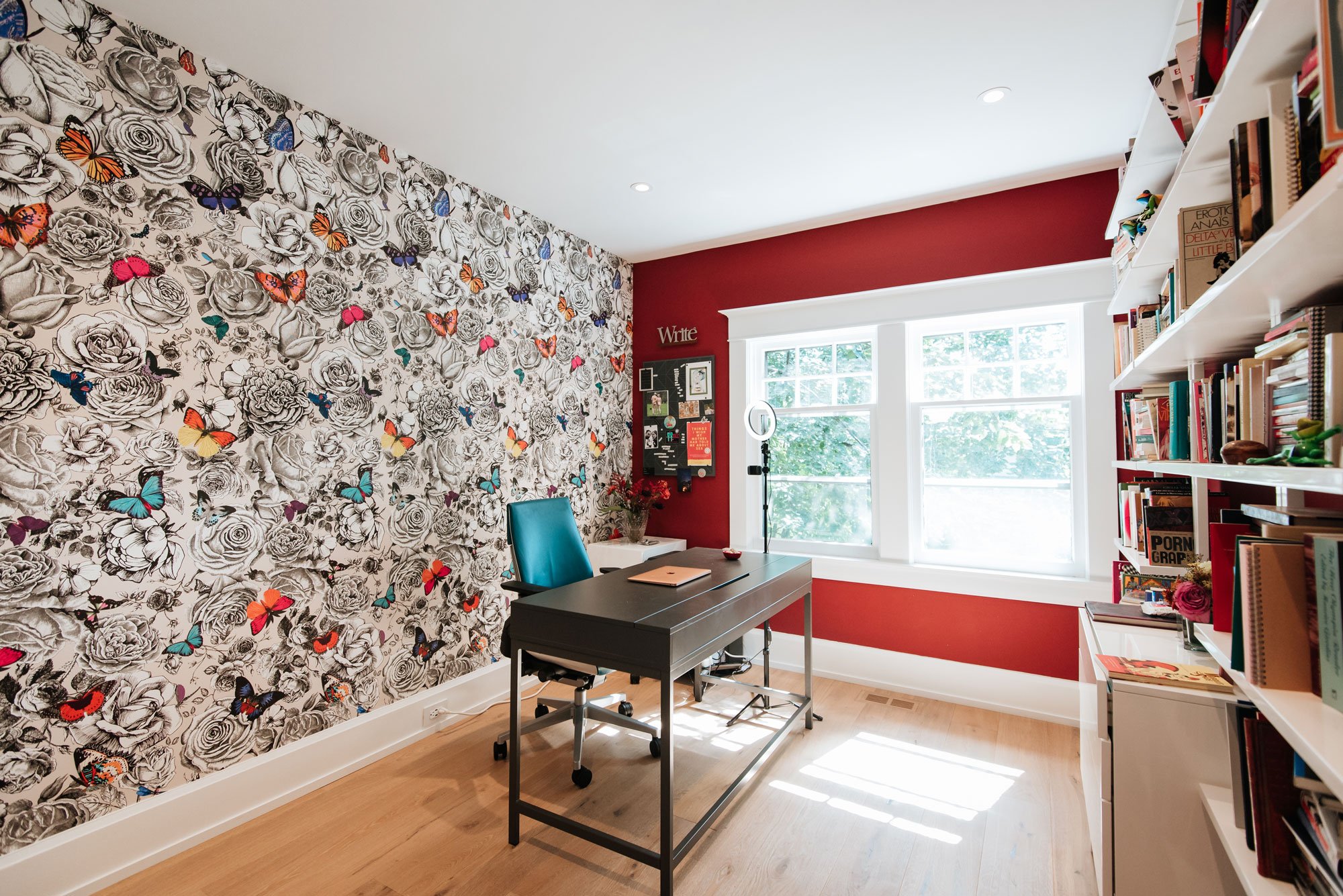 It was Reinhart’s idea to do a blue ombré stair treatment to animate the entranceway: 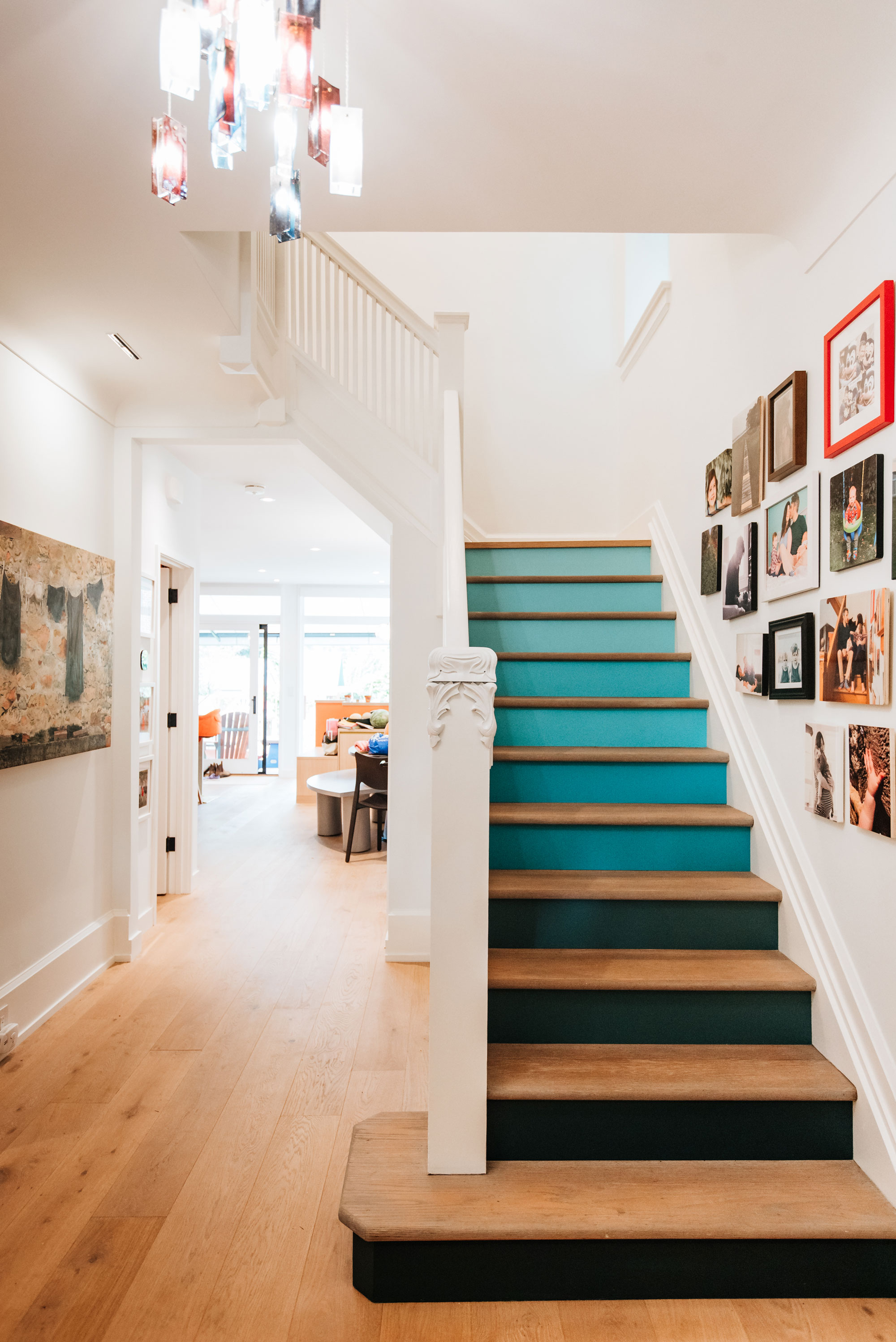 The storage under the stairs is divided into individual cubbies. Handbags, backpacks, hats, scarves and masks go here: 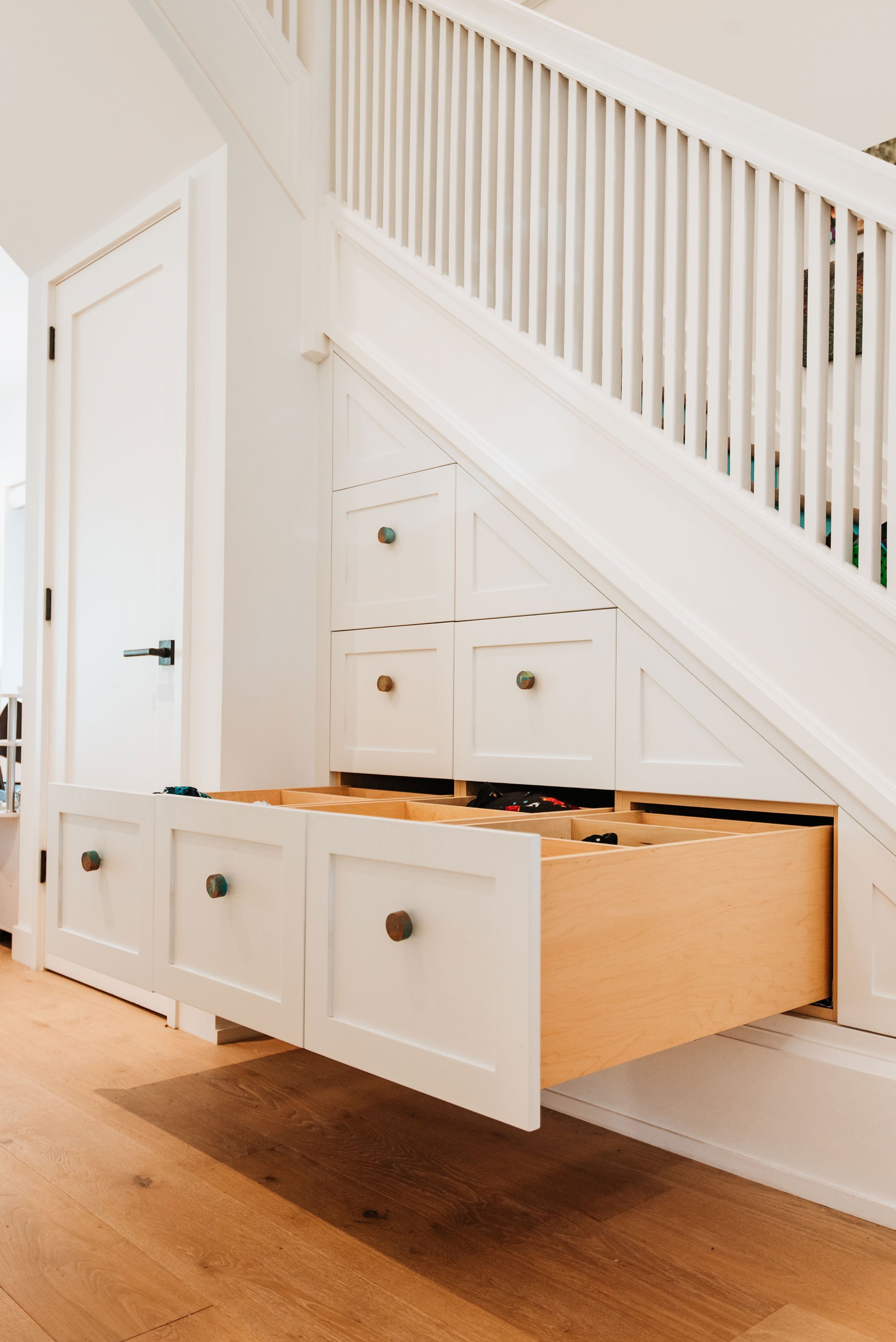 Dave Edwards, a millworker, built the colourful kitchen cabinetry. “Dave thought we were crazy initially,” says Kelly. “But when he installed it, it made sense”: 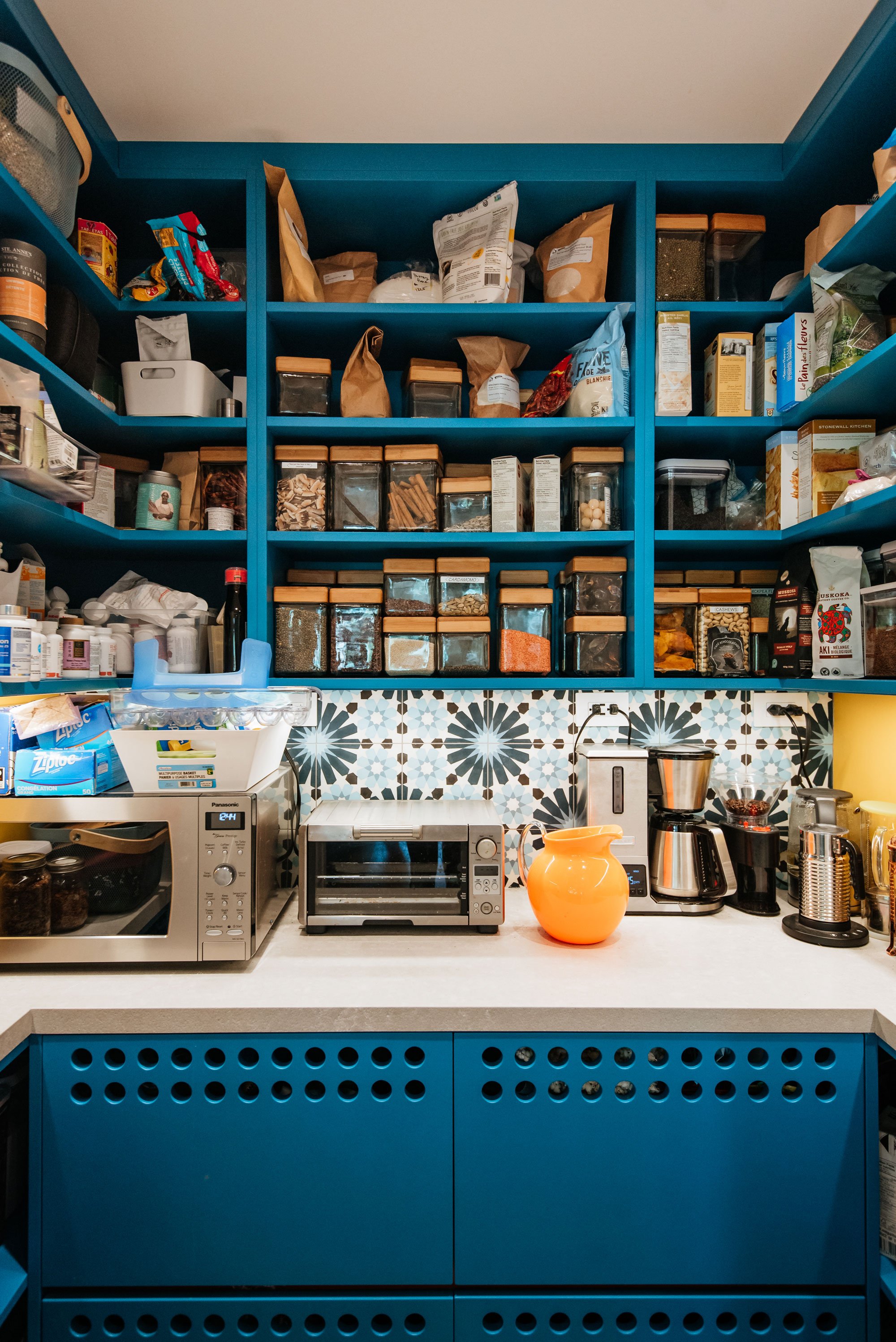 “The kitchen has lots of storage—and everything fits to the millimetre,” says Andrew. There’s specialized storage for cutting boards, a mixer, even a Tupperware drawer: 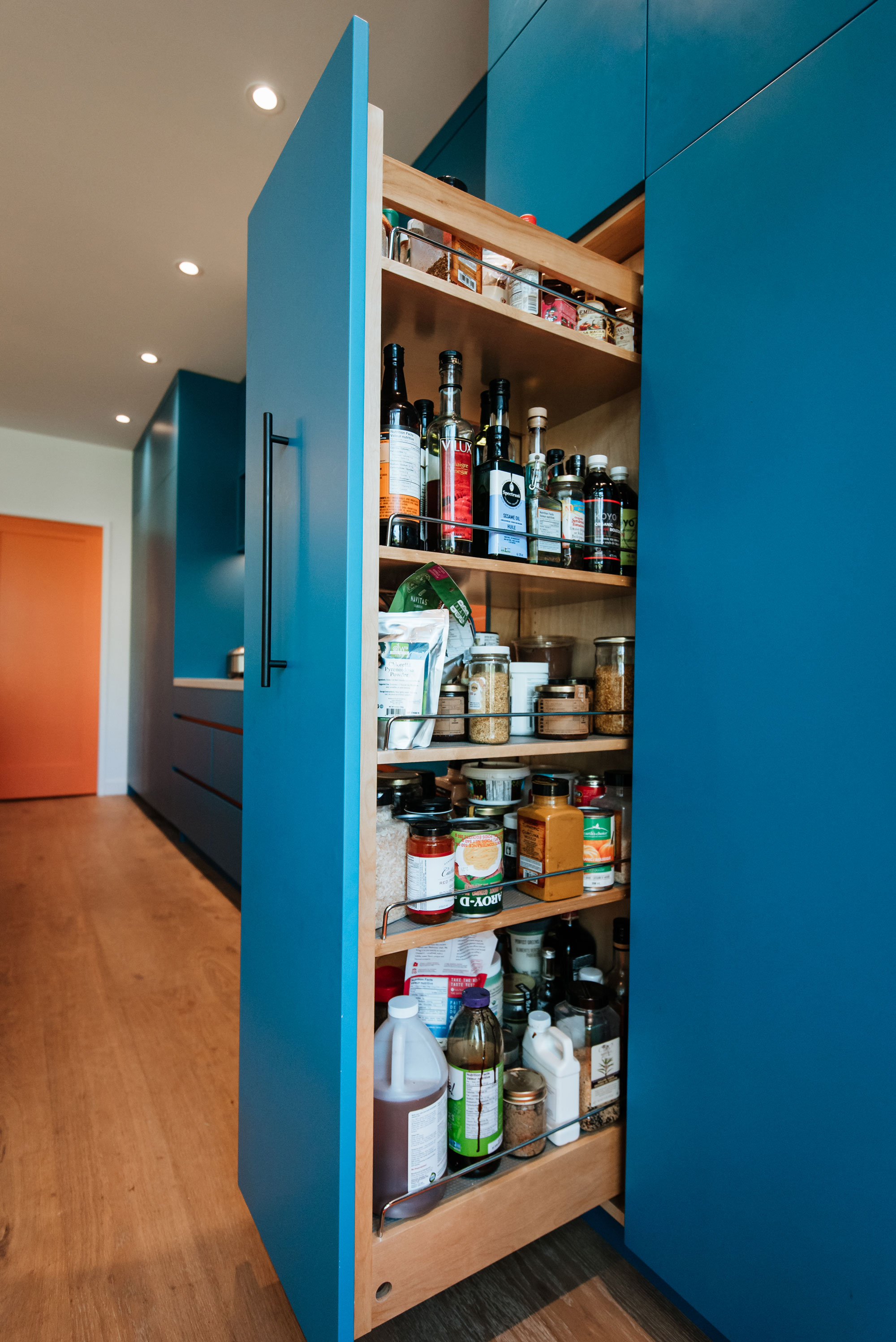 The pull-out spice drawer is well-stocked and super organized: 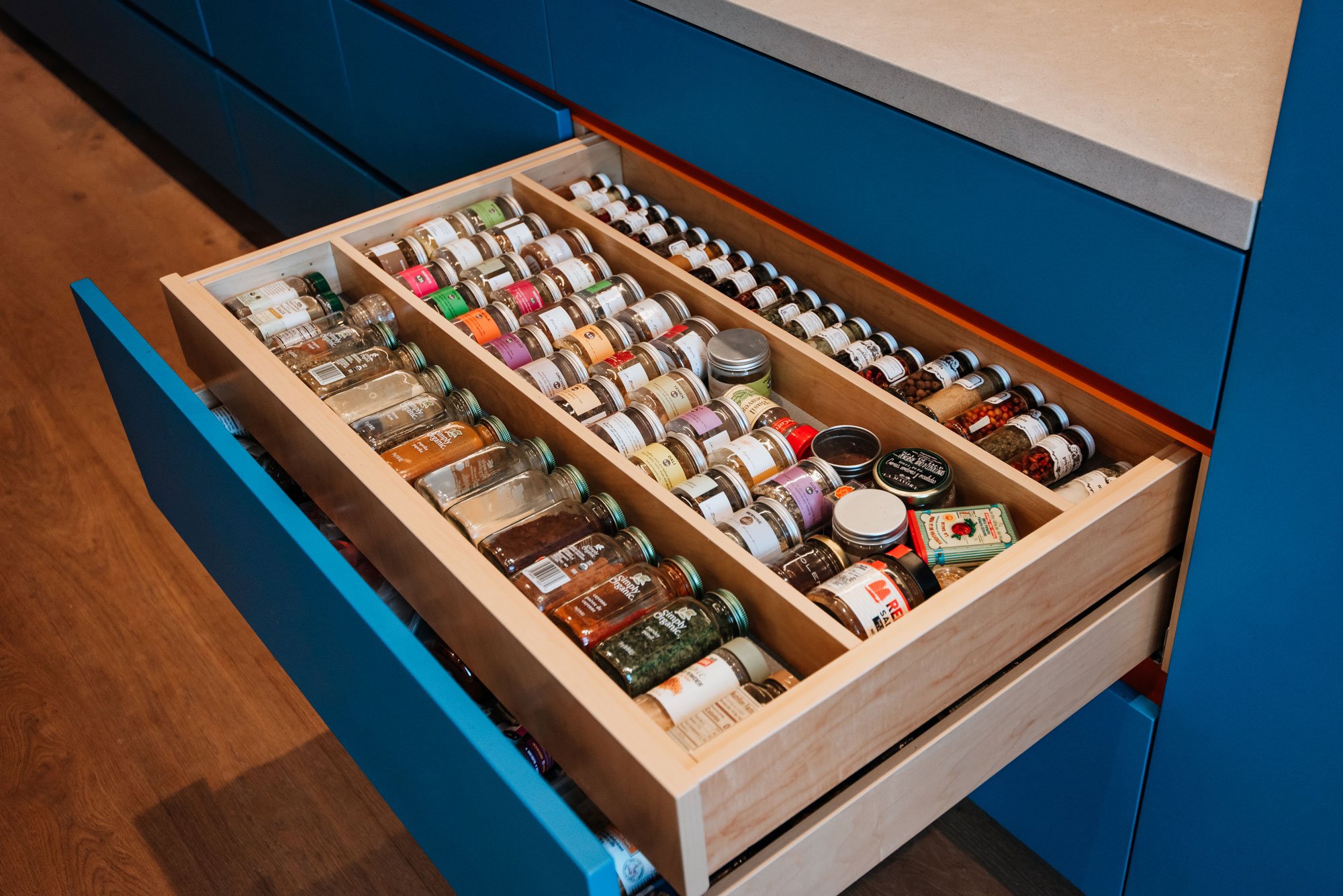 The powder room sports a bookish Kate Spade wallpaper and a hot-pink ceiling.“Our painters were so happy,” says Kelly. “They never get to use these colours—it’s always boring white and grey”: 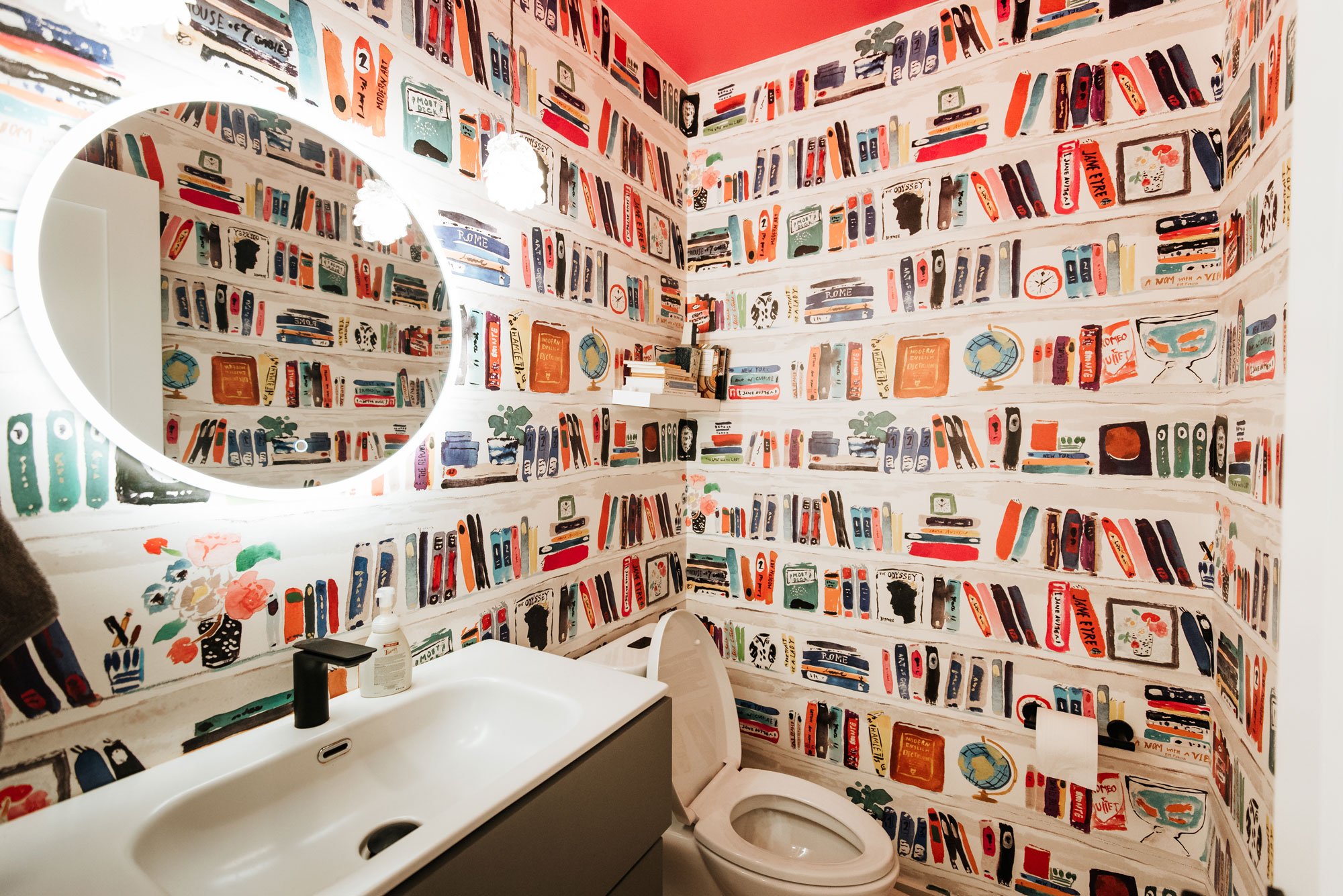 They excavated the basement to increase the ceiling height from six and a half feet to over eight feet. Now the space is all about fun, which was a godsend during lockdown. The kids play down here, build things, do crafts, read and swing in their pods—there’s one for each of them hanging from the ceiling: 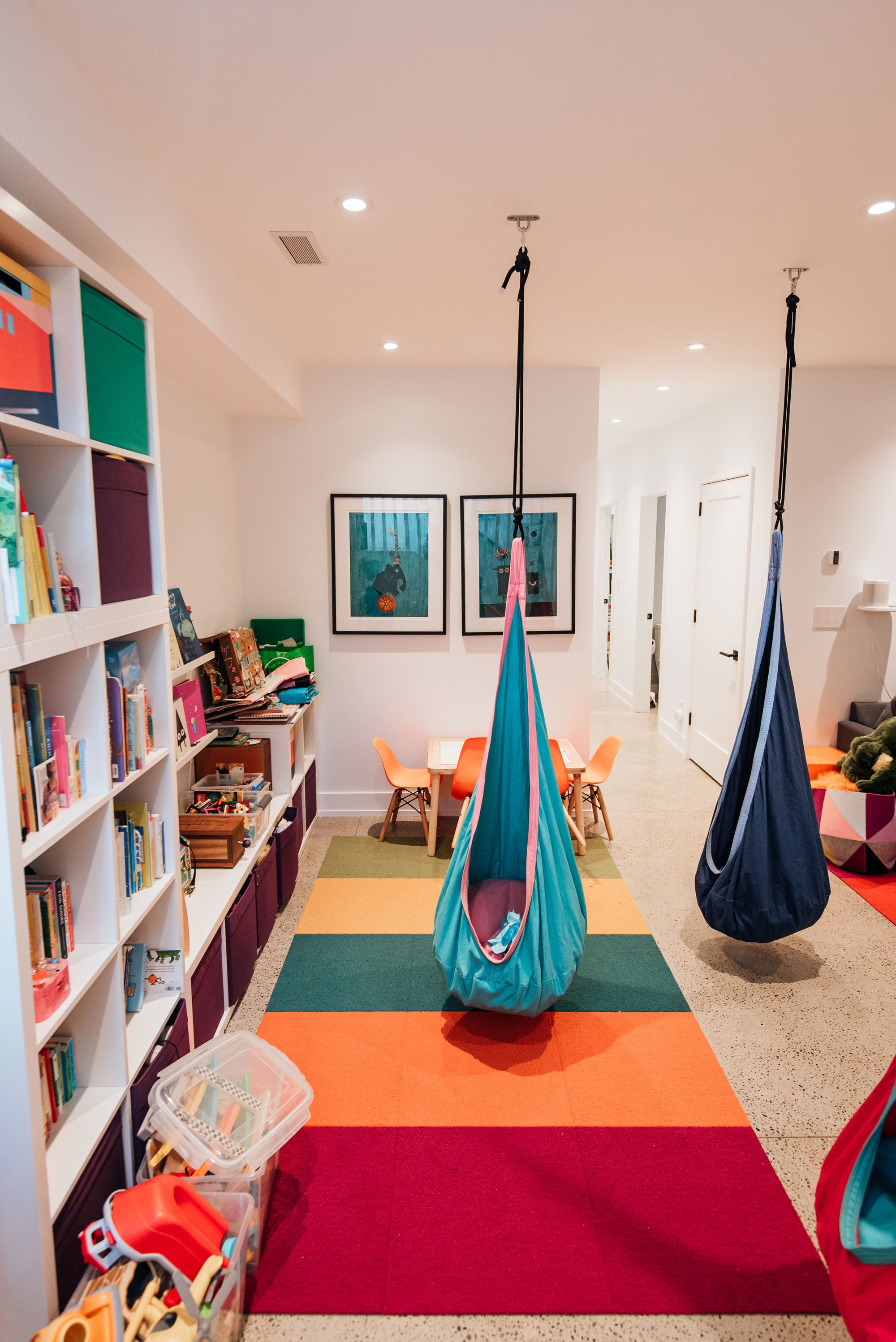 And there’s a secret little hiding place under the basement stairs where Danielle did her Zoom classes: 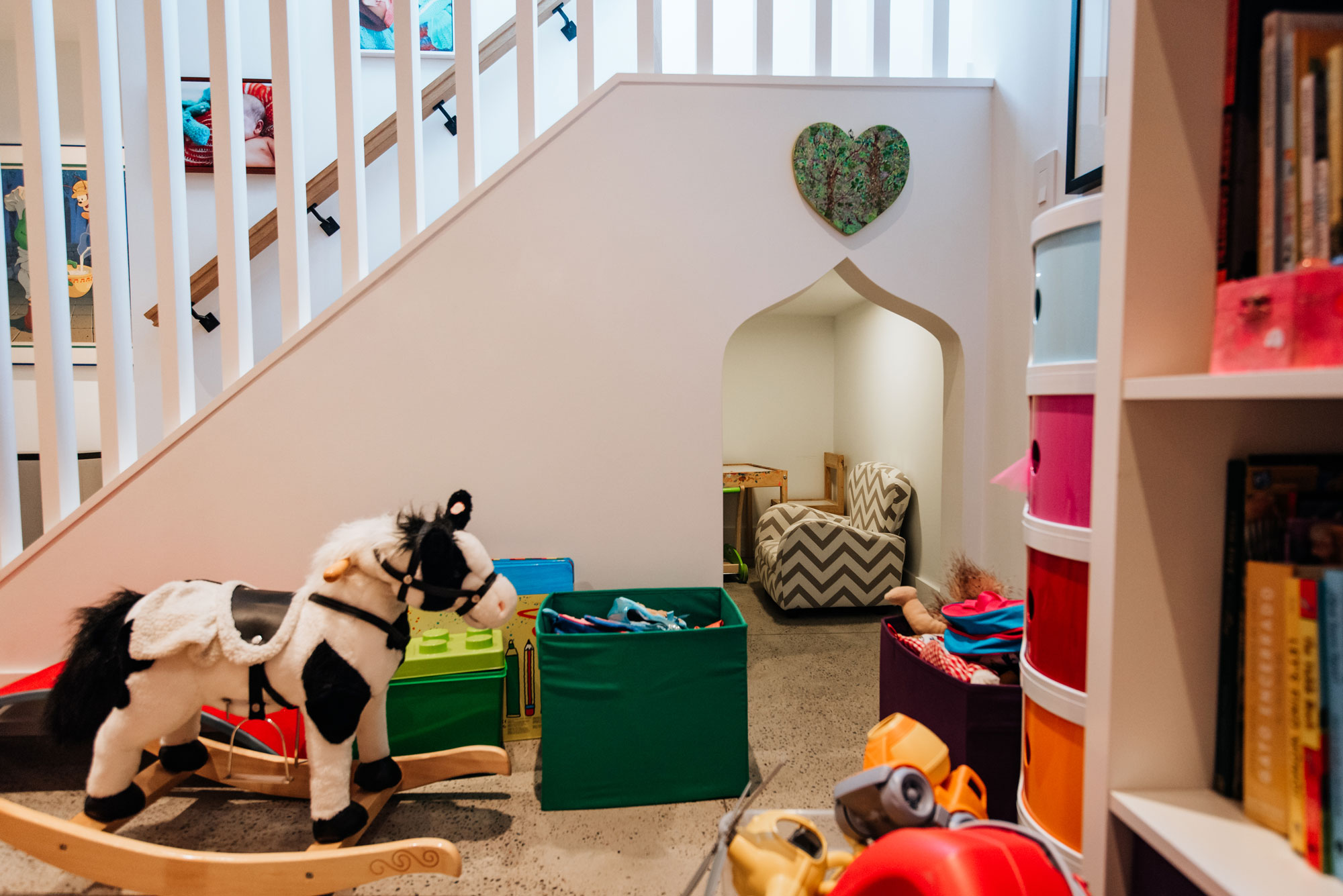 Solal’s favourite colour is yellow, so they painted yellow stripes on his ceiling. The kids love making forts out of the Nugget modular sofa in his room. The family gather on it every night to read bedtime stories: 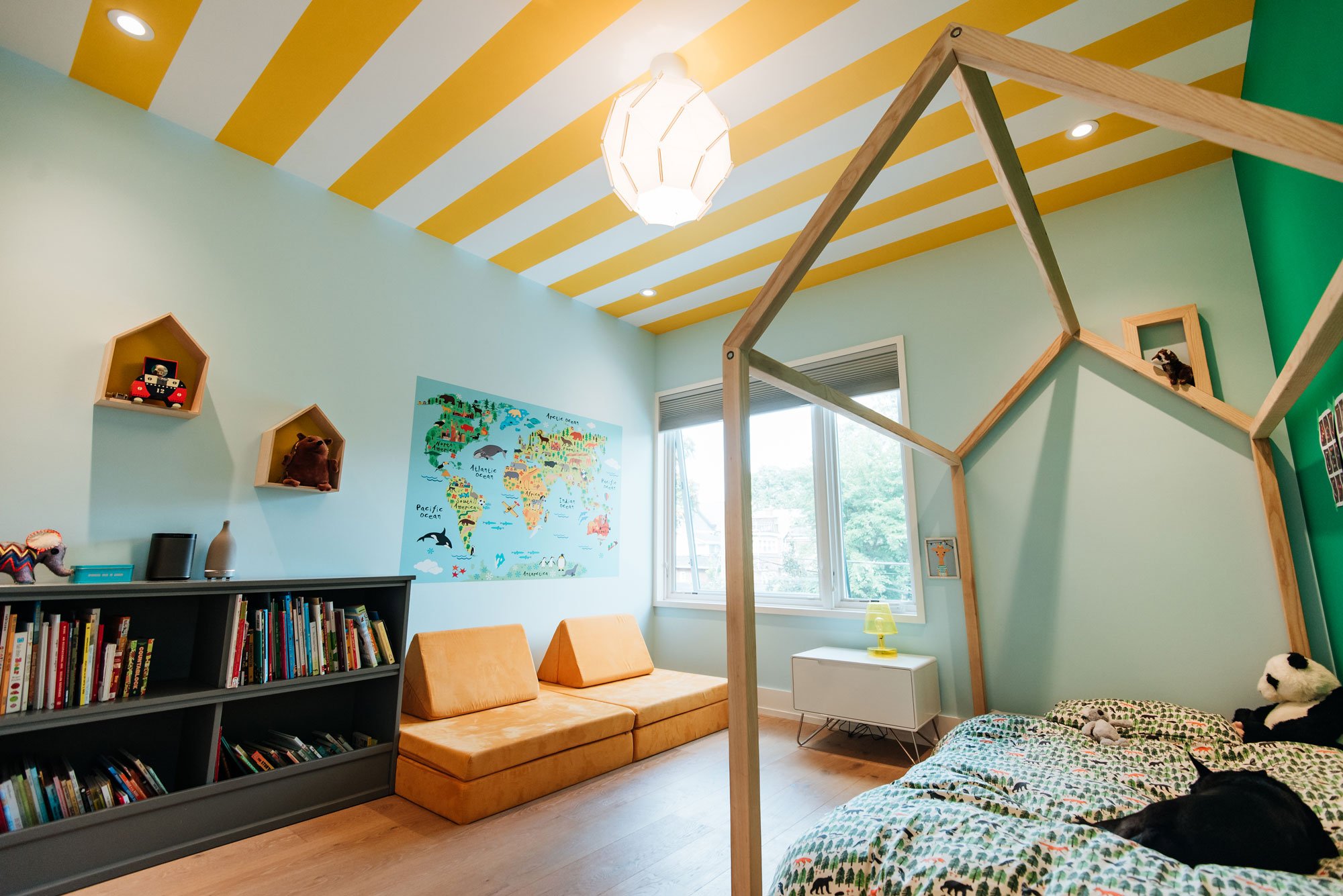 The bed is from the Raum Project and was originally made for Danielle. Solal inherited it after the reno. “We wanted something fun that would also keep the mattress on the floor, so the kids could get in and out of bed easily,” says Kelly. Lola (their terrier Chihuahua mix) likes it, too: 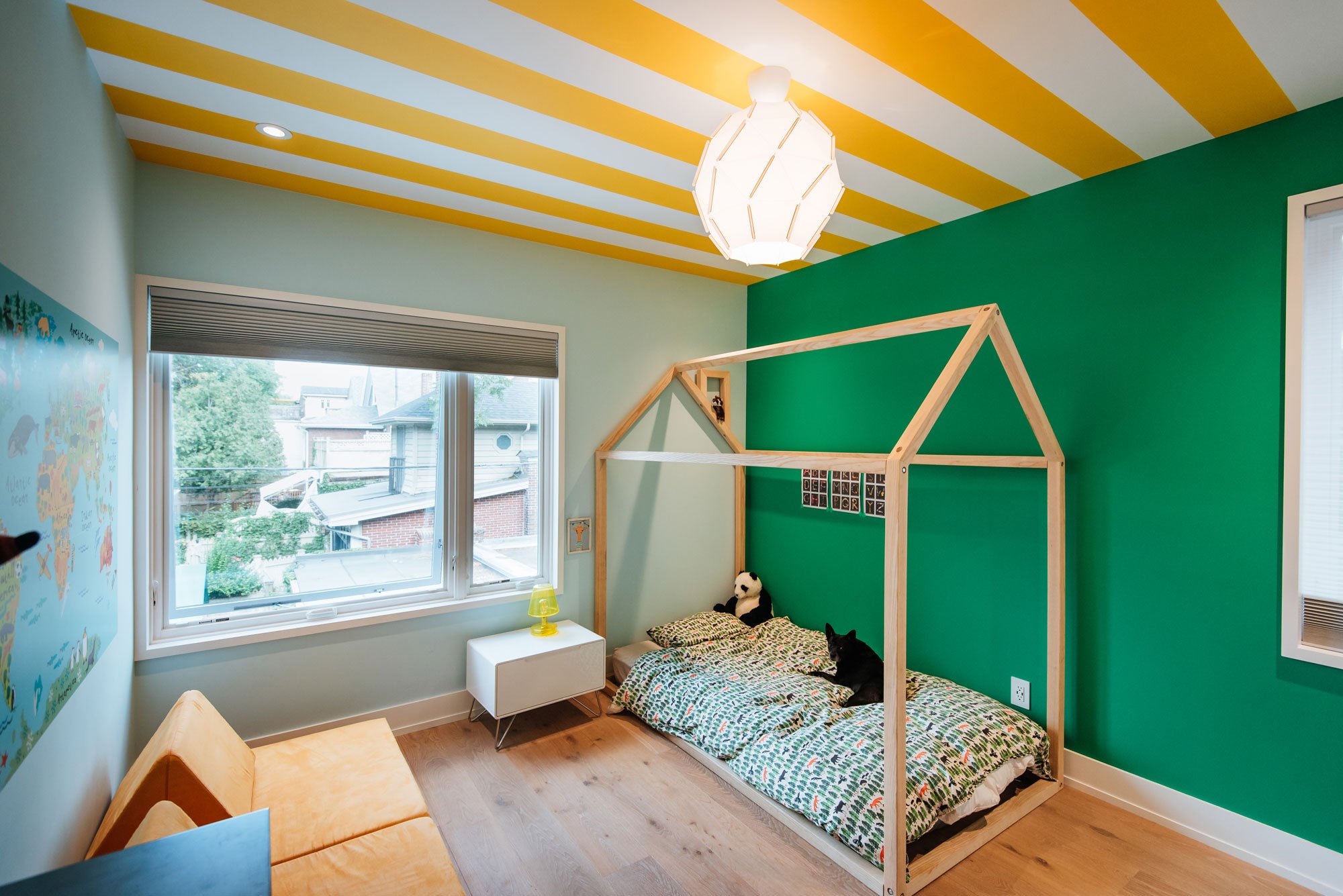 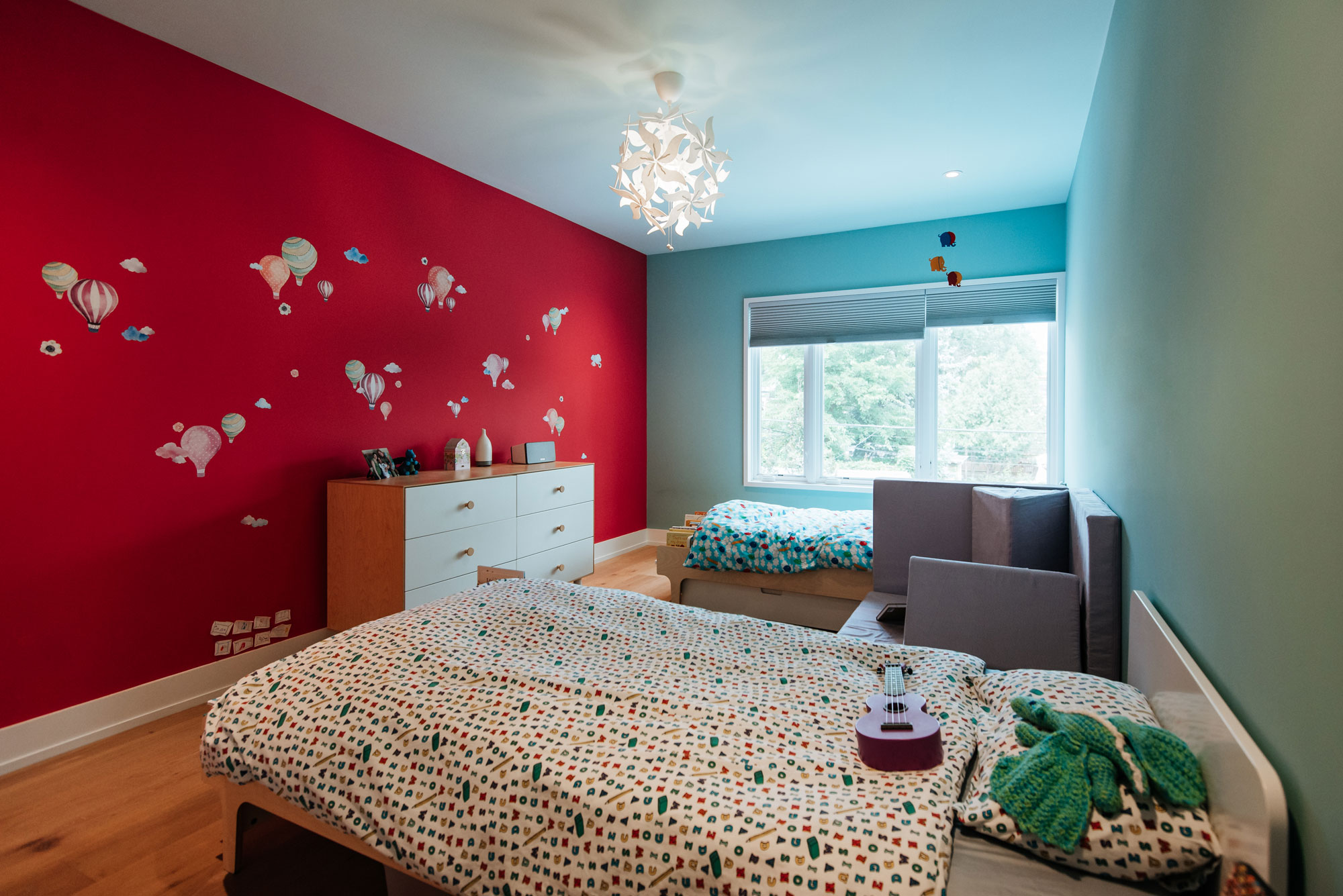 The doors are all white with different coloured edges, so you only see the pop of colour when they’re open: 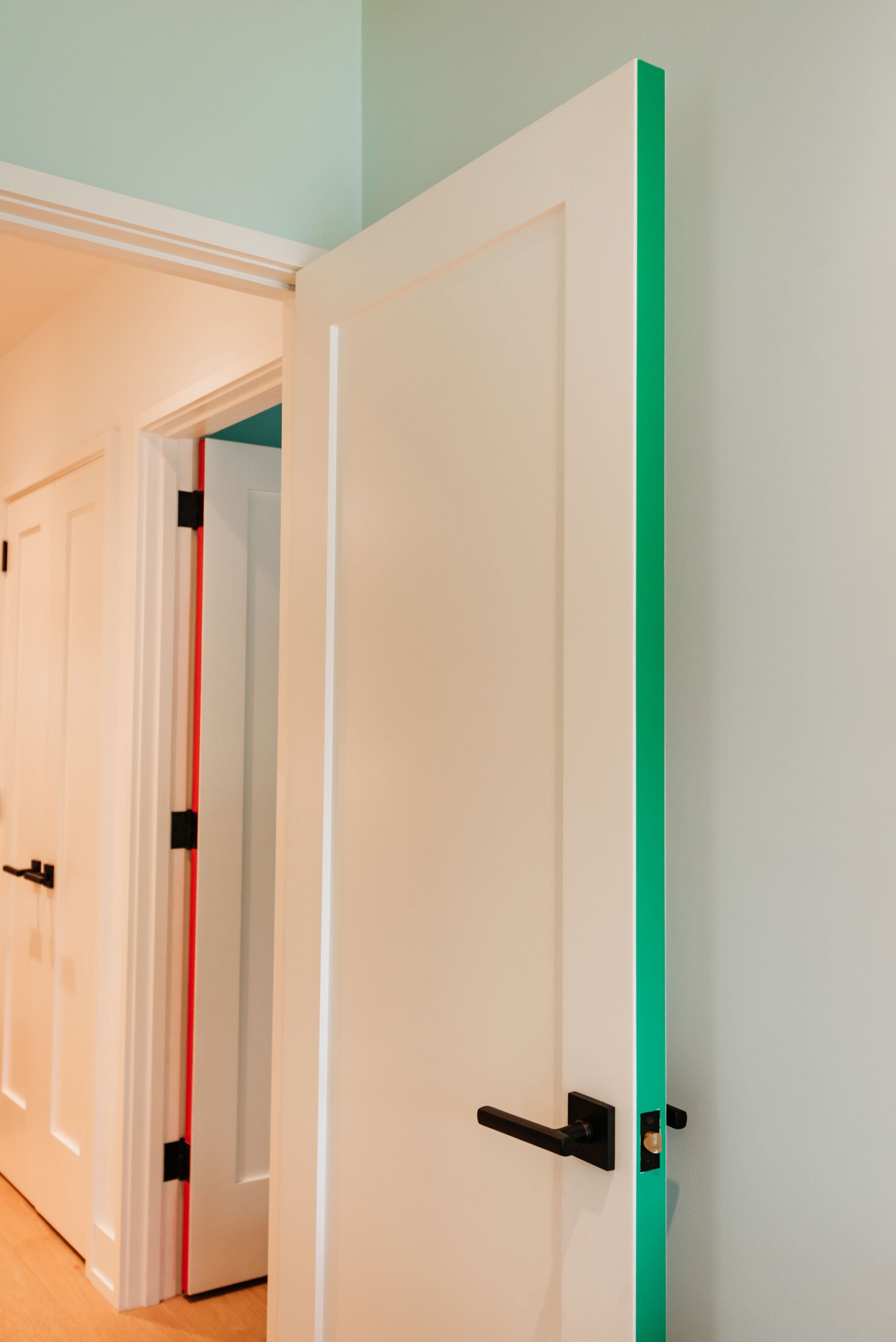 Kelly and Andrew hired Asquith for the job partly because she’s also a parent. It was her idea to design floating vanities in the bathrooms so they could slide step stools under them: 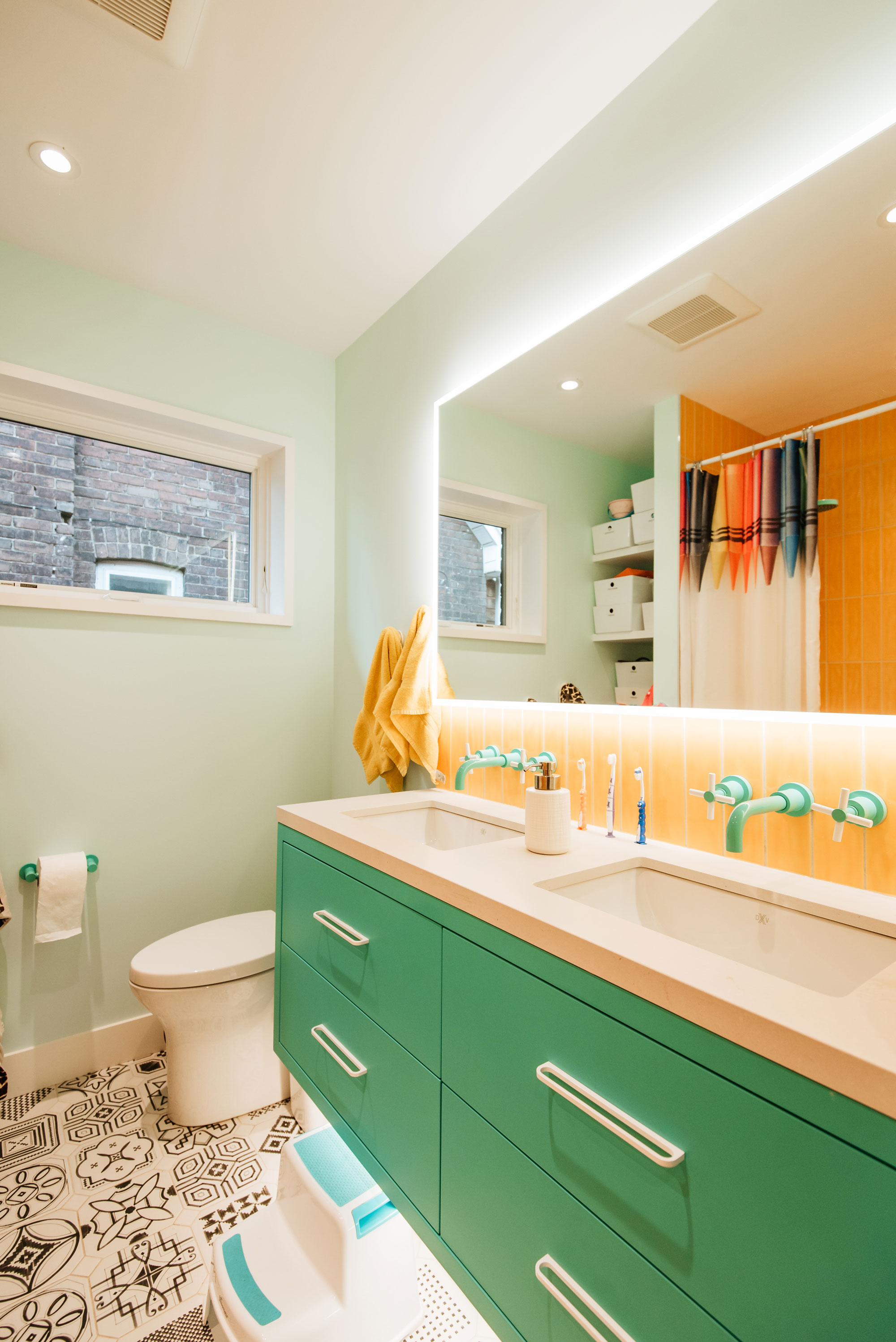 The kids’ bathroom is even brighter and cheerier than the rest of the house, if that’s possible: 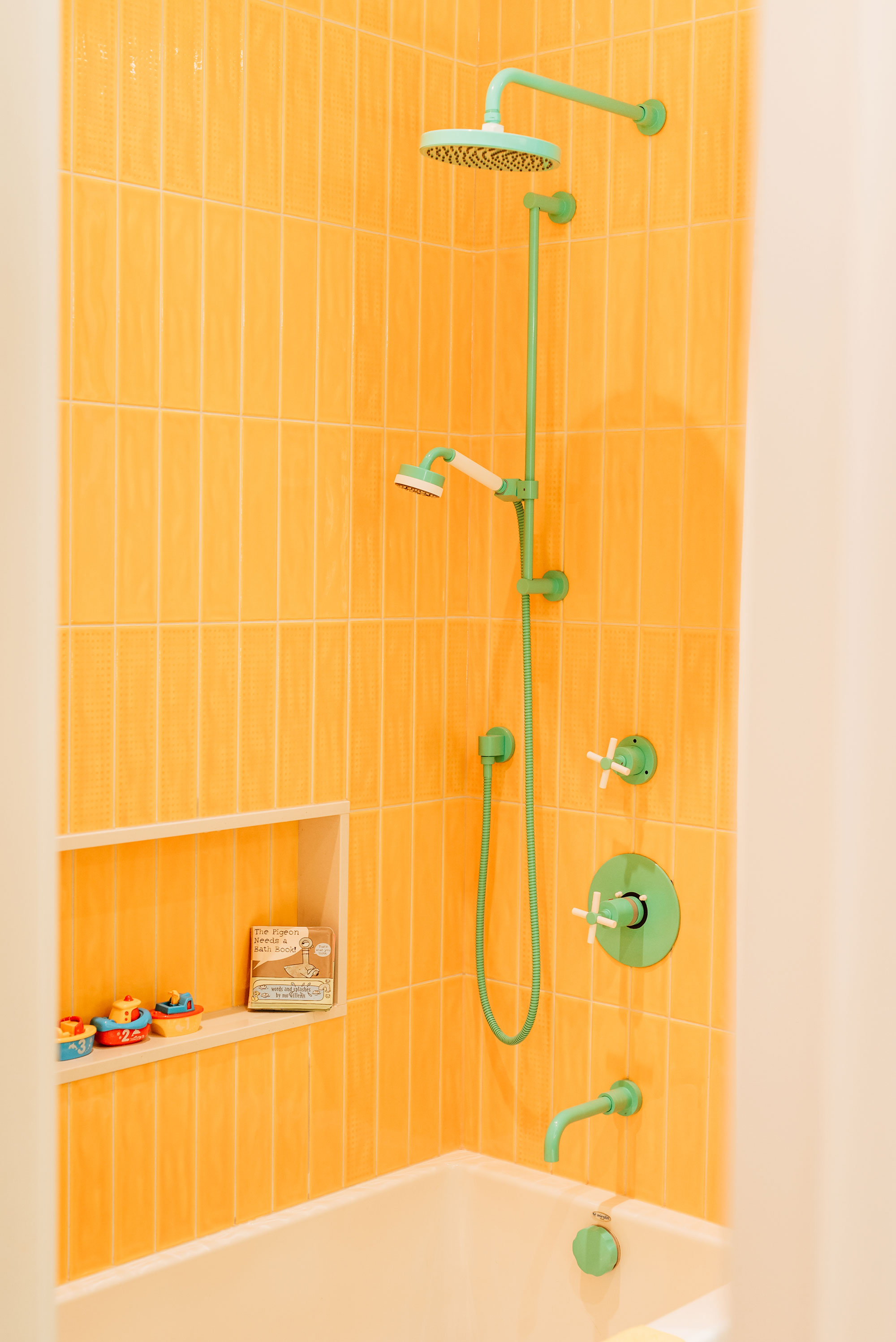 The grownup bathroom is a little more sedate: 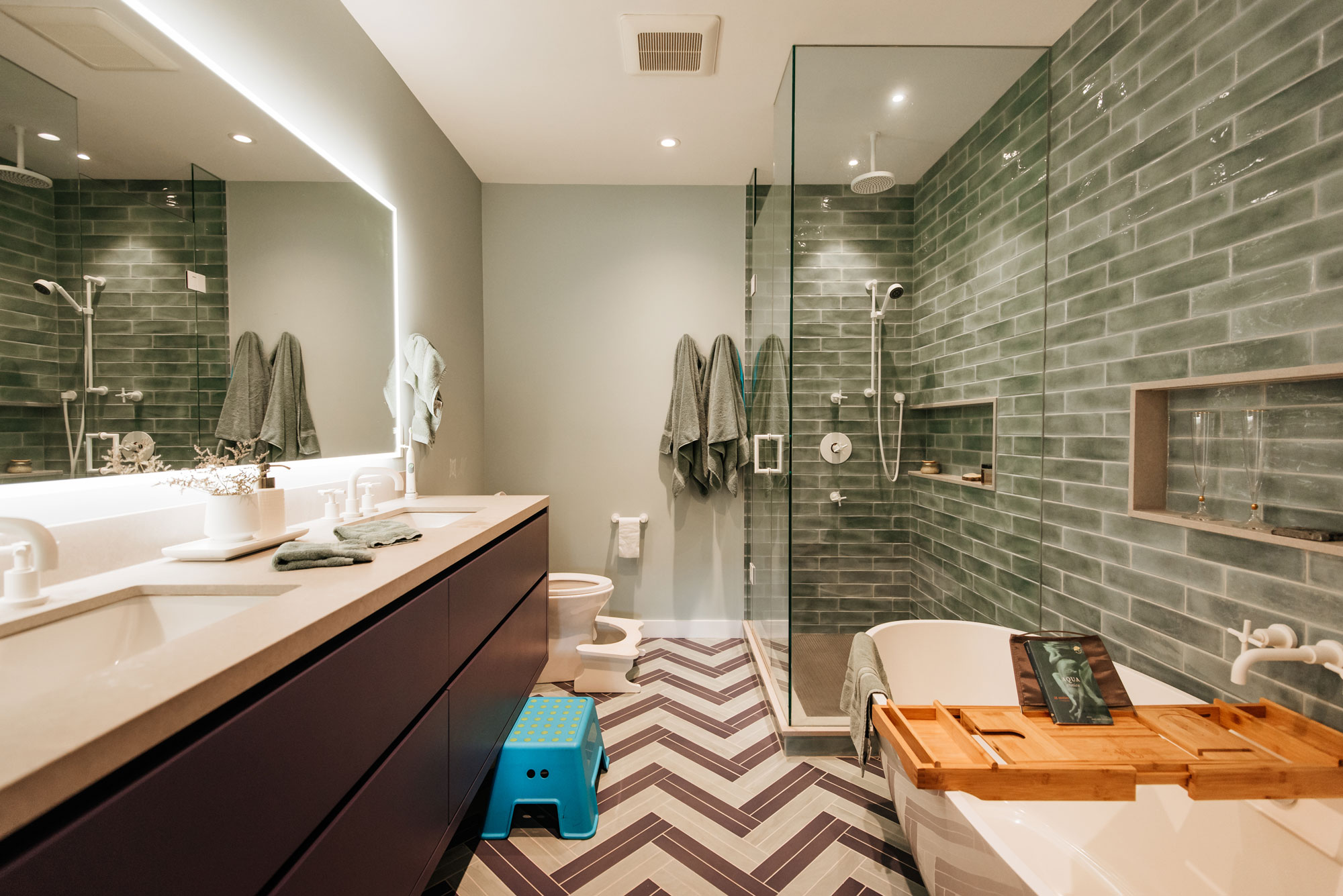