A 6,470-square-foot condo in Humber Bay Shores, owned by Salah Bachir, a philanthropist, art collector and the former president of Cineplex Media. It has six bedrooms and four bathrooms, spanning two floors with identical layouts. (The art doesn’t come with it, unfortunately.)

In 1995, Bachir bought the lower-level unit, then he purchased the condo above it in 2005 and rented it out. It wasn’t until 2011 that the units were merged, with the help of architectural firm Kohn Shnier.

The condo building, Palace Pier, was built in 1978 and has 45 floors. The building is popular among retirees, couples and families, and it’s close to lakeside paths and trails. The unit also comes with four parking spaces and two lockers.

Bachir and his husband use the lower level as their main living space. Here’s an art-filled hallway that leads to the dining room: 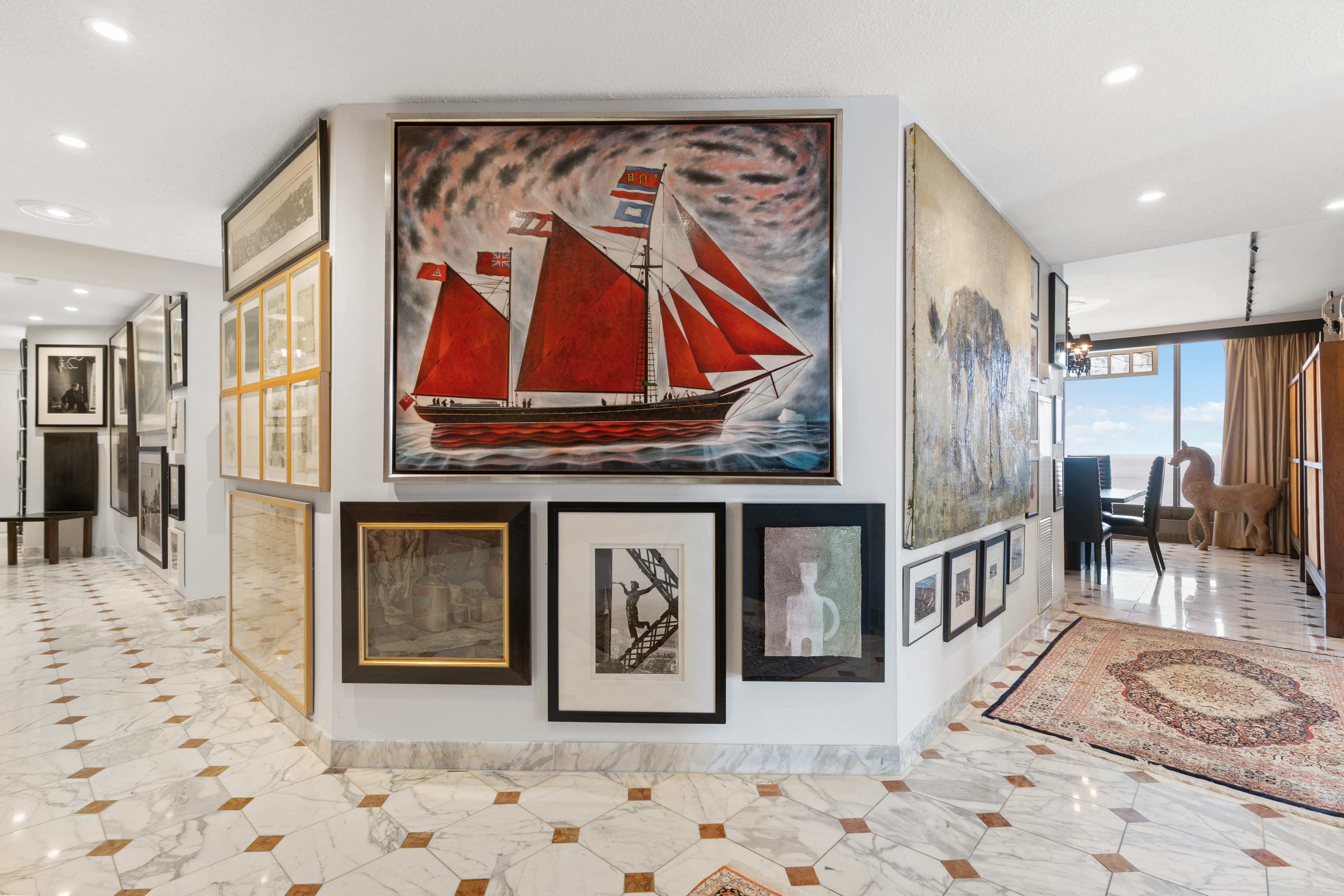 The powder room on the first floor has back-painted walls with glass panels in front. You can also see a renaissance-style ceiling mural in the mirror’s reflection: 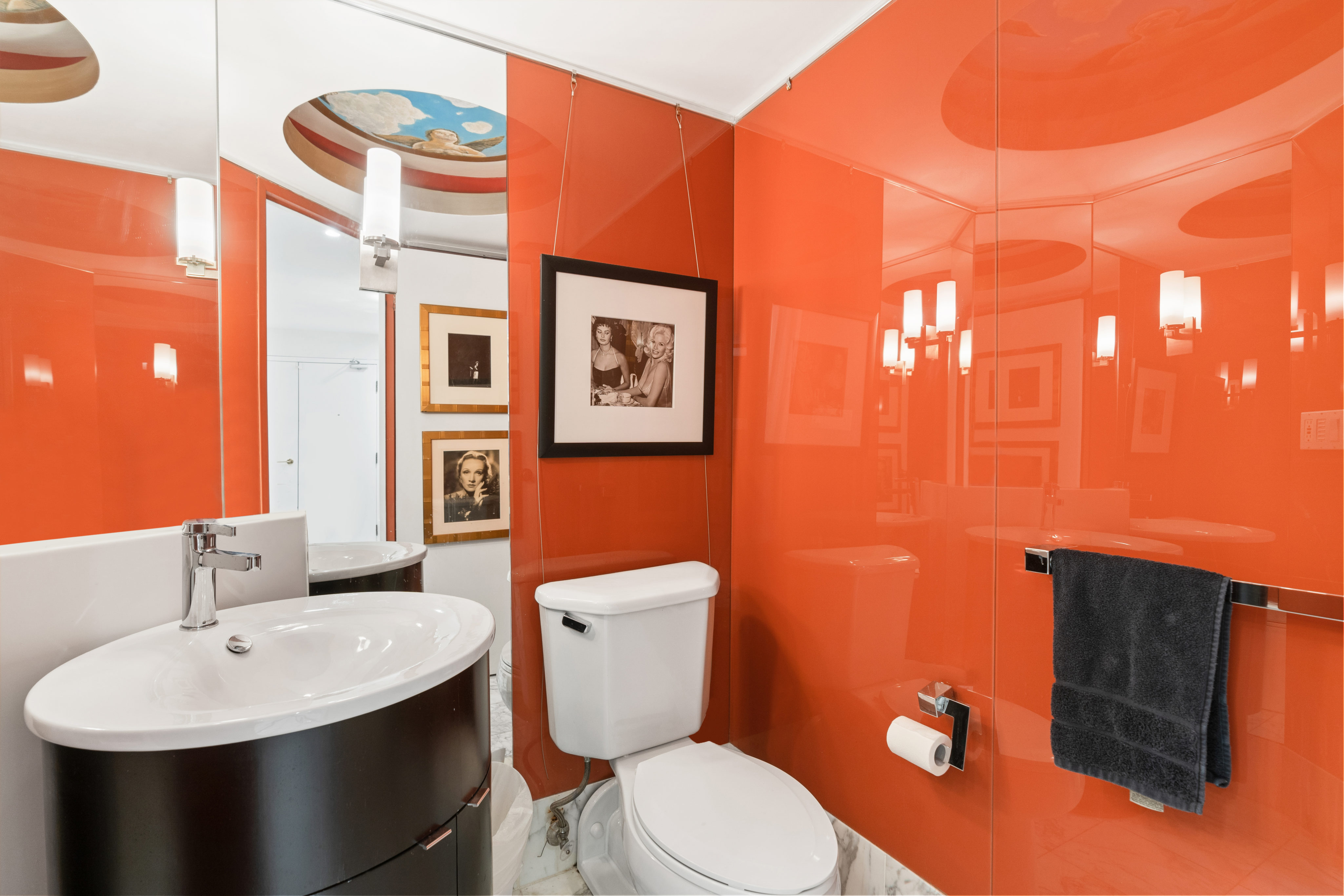 The lower-level living room has a corner window with a view looking over Lake Ontario. Track lighting along the perimeter of the room is designed to be reconfigured whenever pieces are added or moved around: 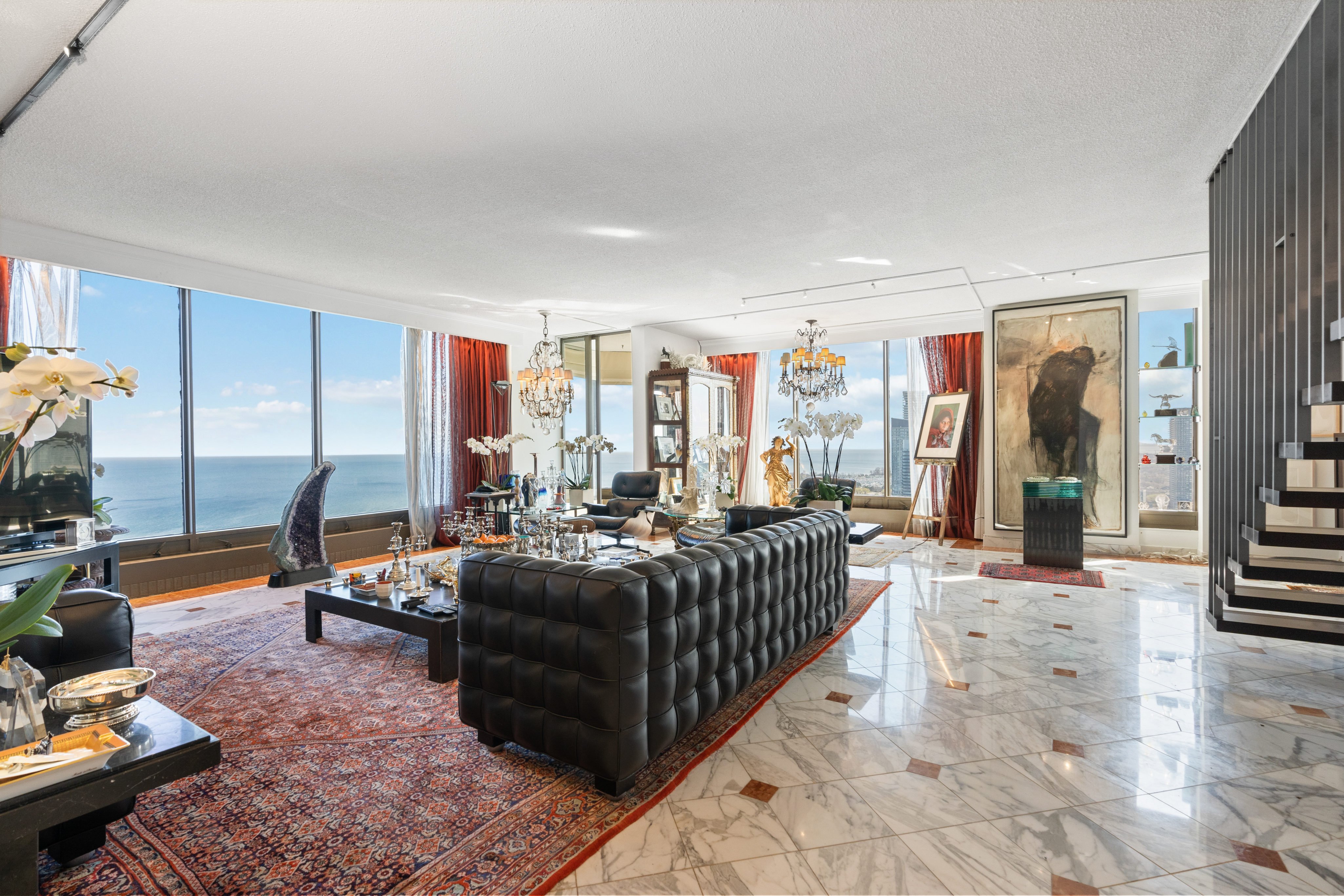 Here’s another view of the lower-level living room, where each step of the staircase has been built directly into the concrete wall. The steel rods are decorative: 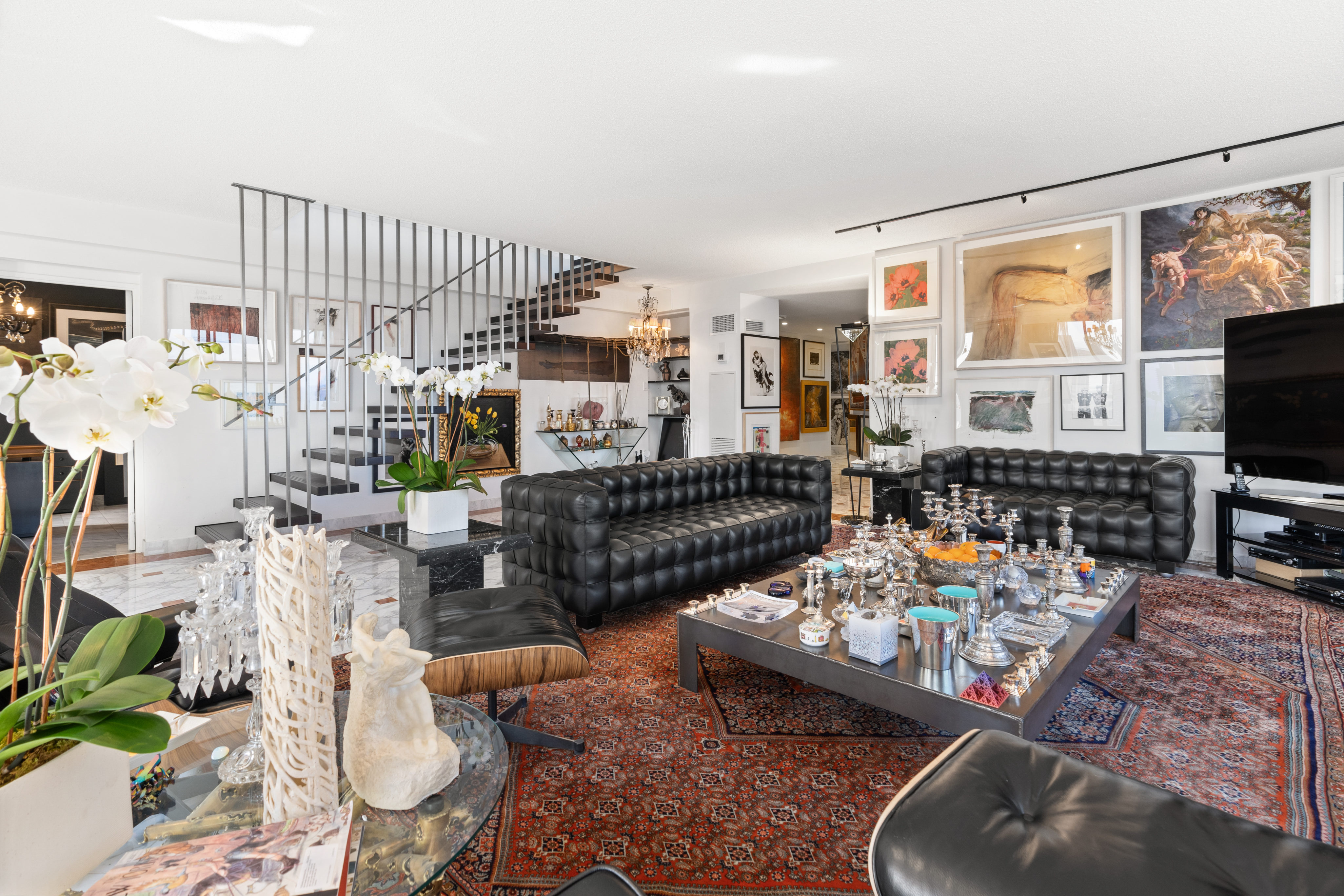 The main-floor dining room is open to the kitchen. Bachir has invited some notable chefs to cook in his home, like Jamie Kennedy and Michael Stadtländer. The kitchen has a granite-clad kitchen island with an integrated cooktop. There are also stainless steel backsplashes and countertops: 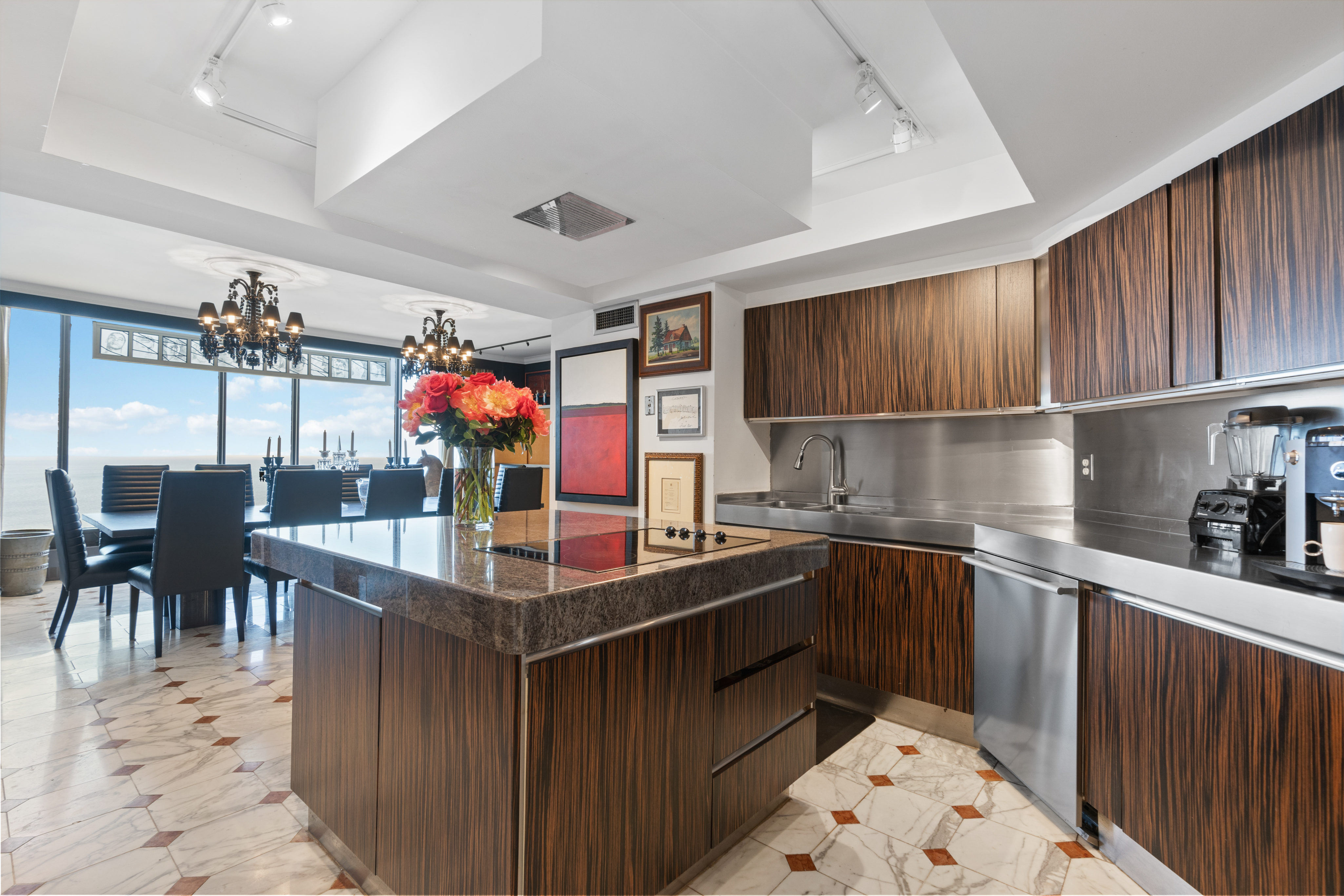 Some more shots of the art-filled hallways on the lower level. To the right is one of Andy Warhol’s iconic Marilyn Monroe portraits: 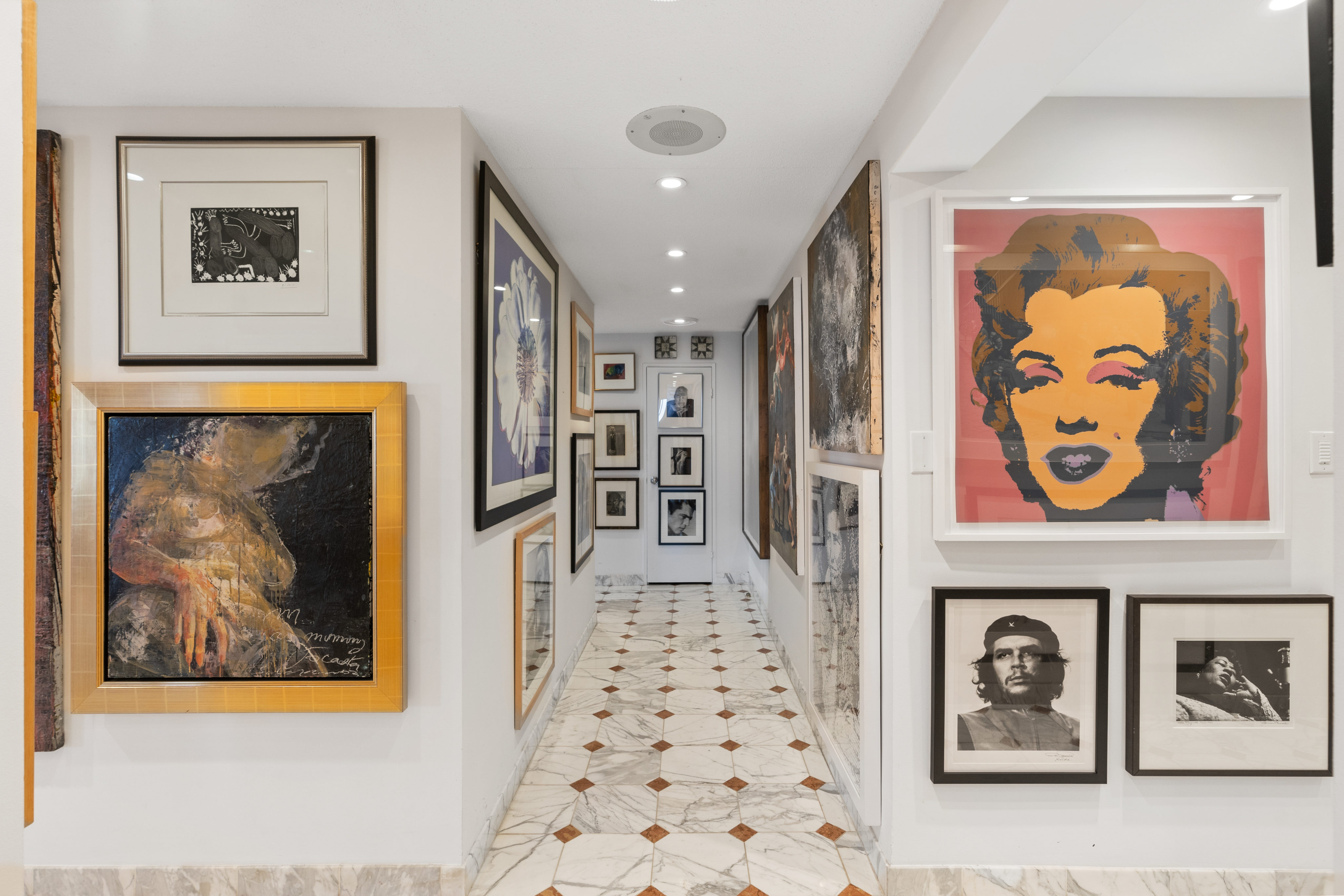 More art on the lower level: 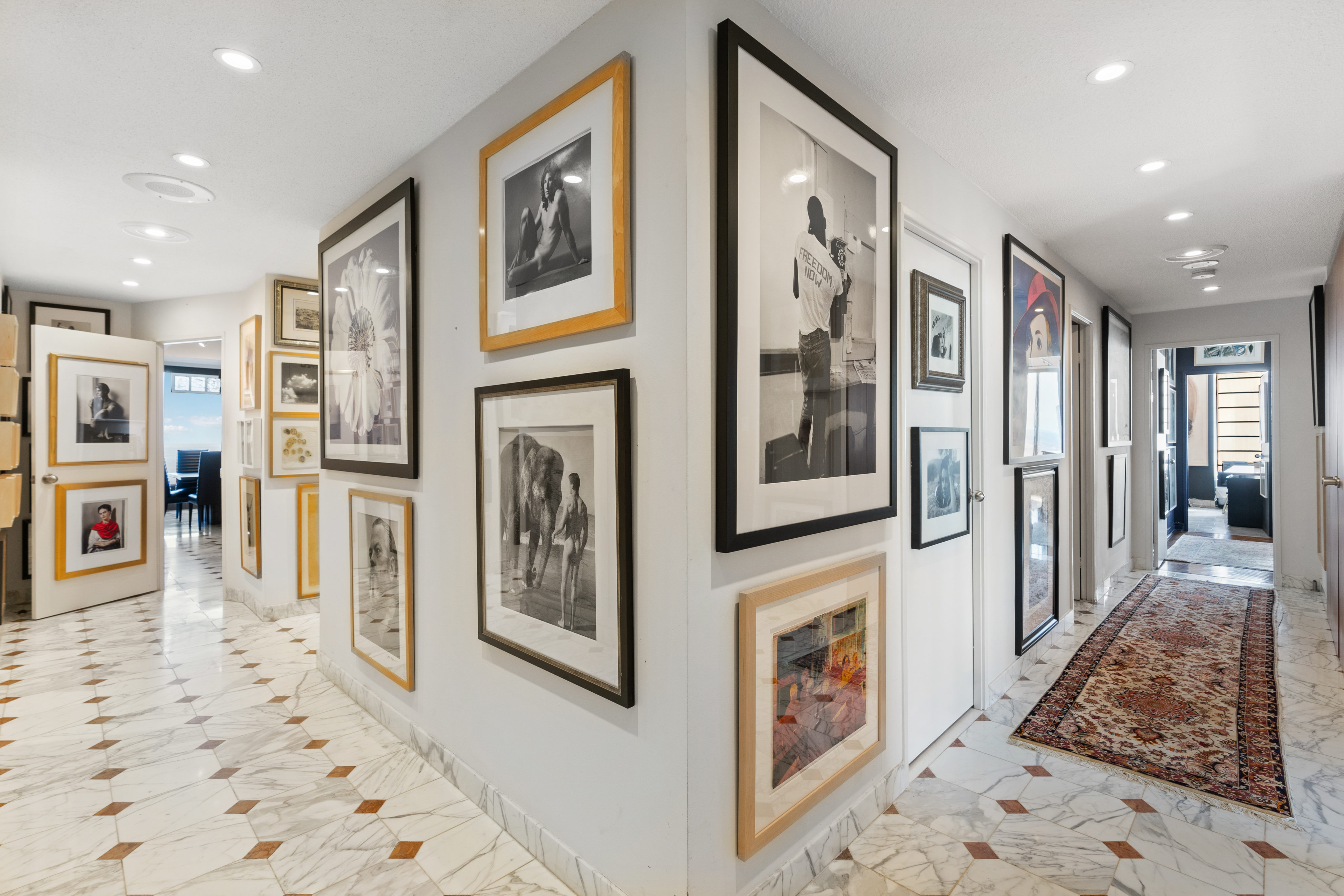 This the primary bedroom ensuite bathroom on the lower floor. It has a large whirlpool tub, surrounded by calacatta marble: 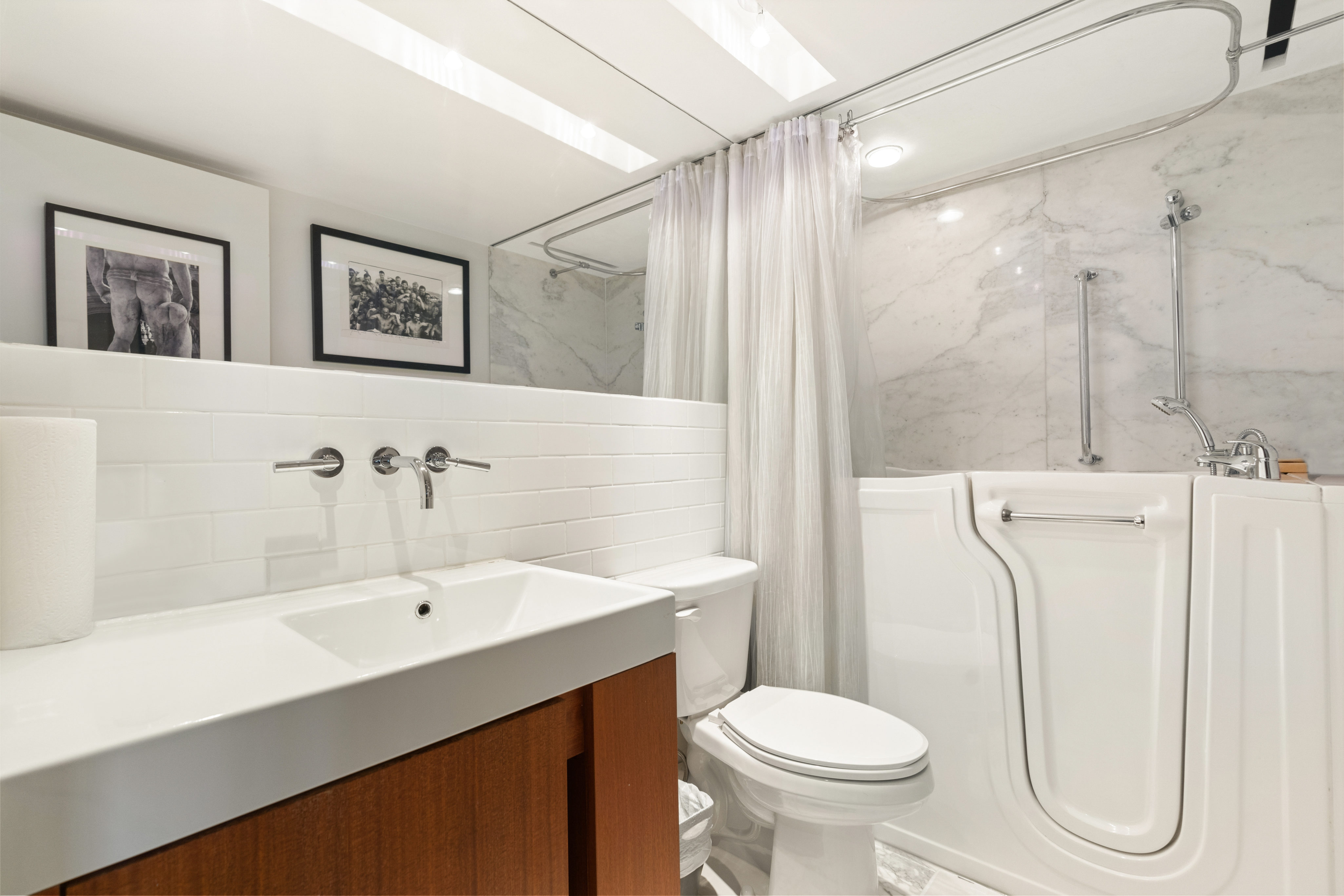 The two floors, which have identical layouts, are connected by a staircase between the living rooms. The upper level living room was mostly used as a reception room for hosting small events and fundraisers: 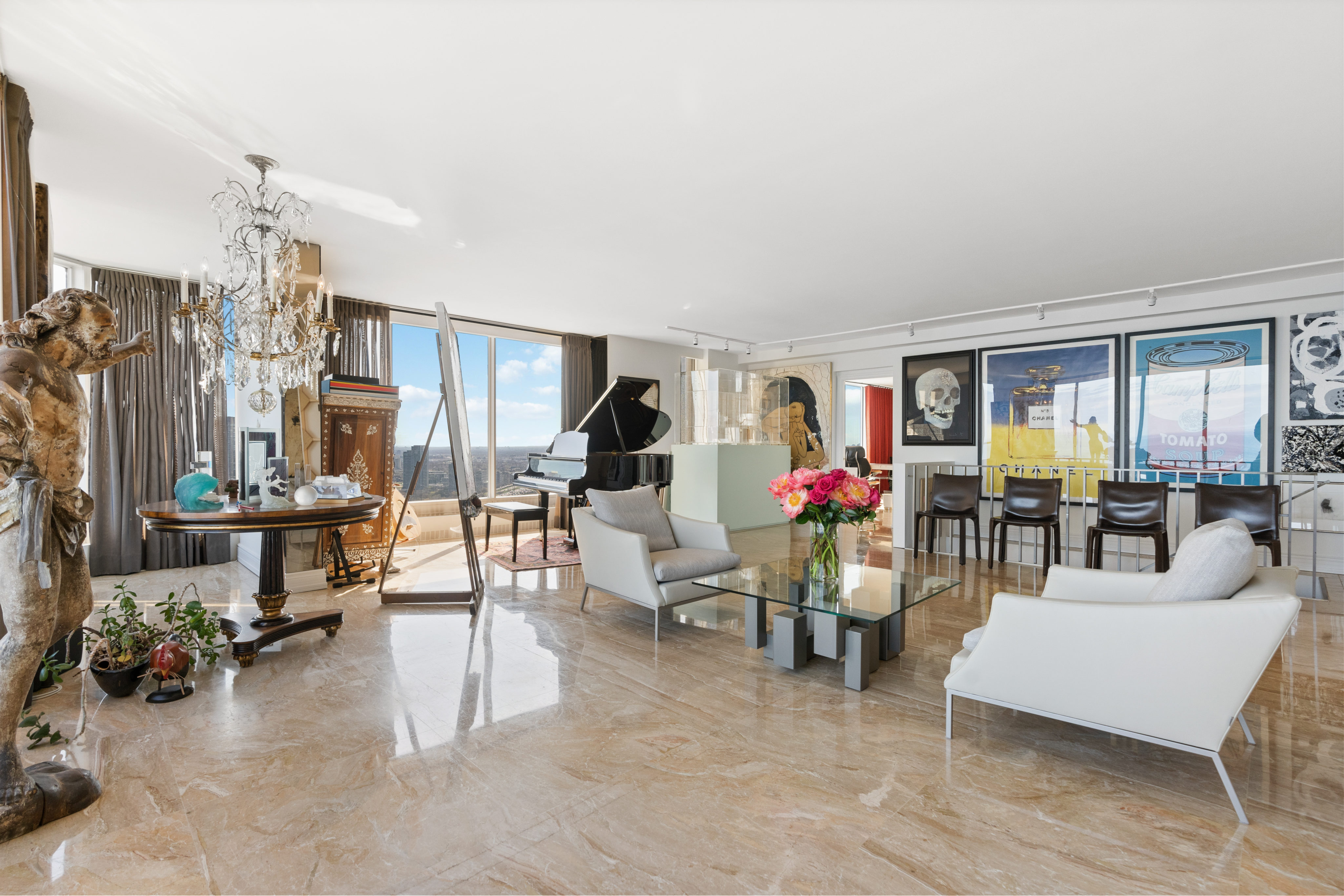 Here’s a view of the stairwell entrance, with more Andy Warhol prints: 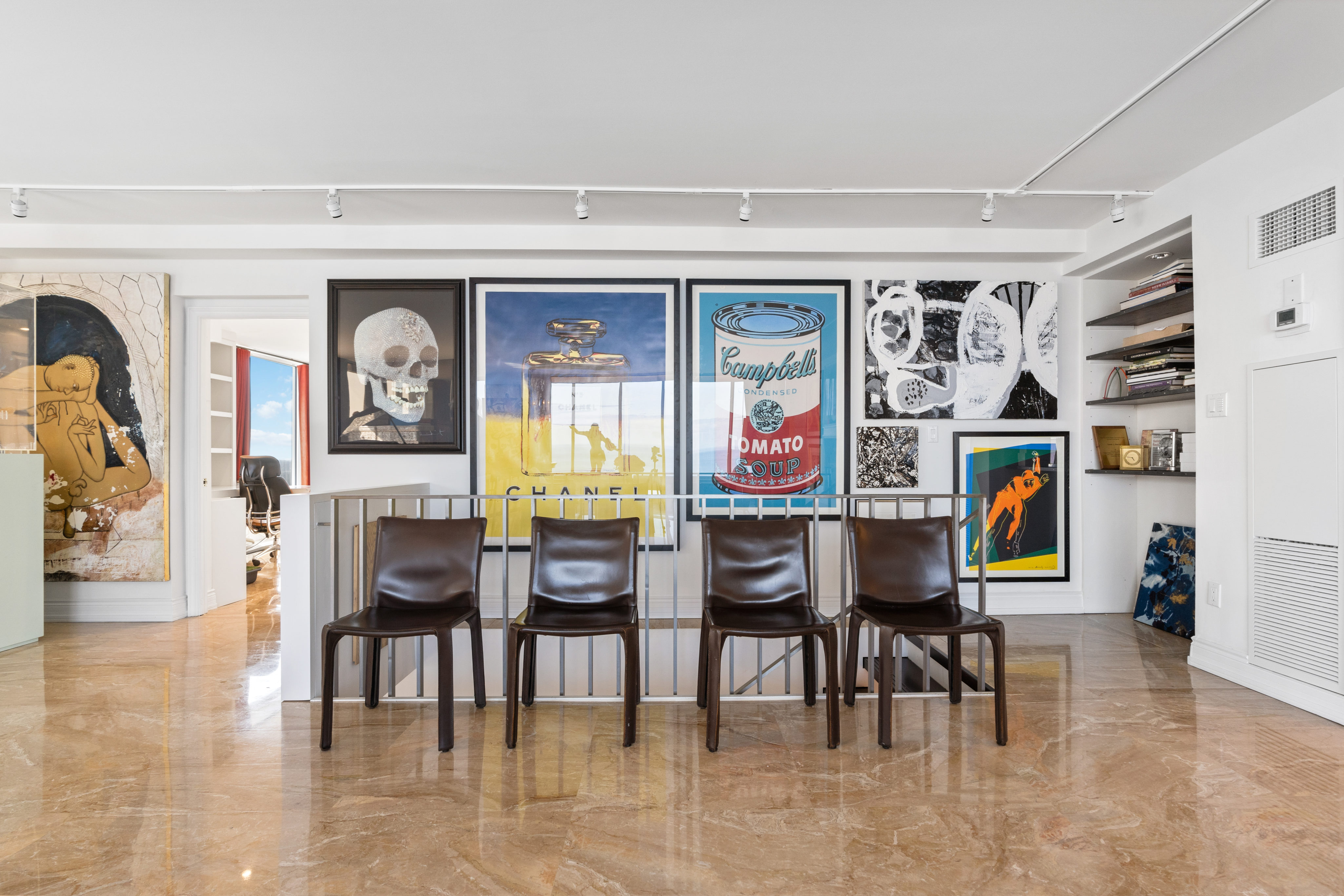 The upper floor bedrooms served as guest suites for Bachir’s guests. Here’s the primary bedroom on the upper floor: 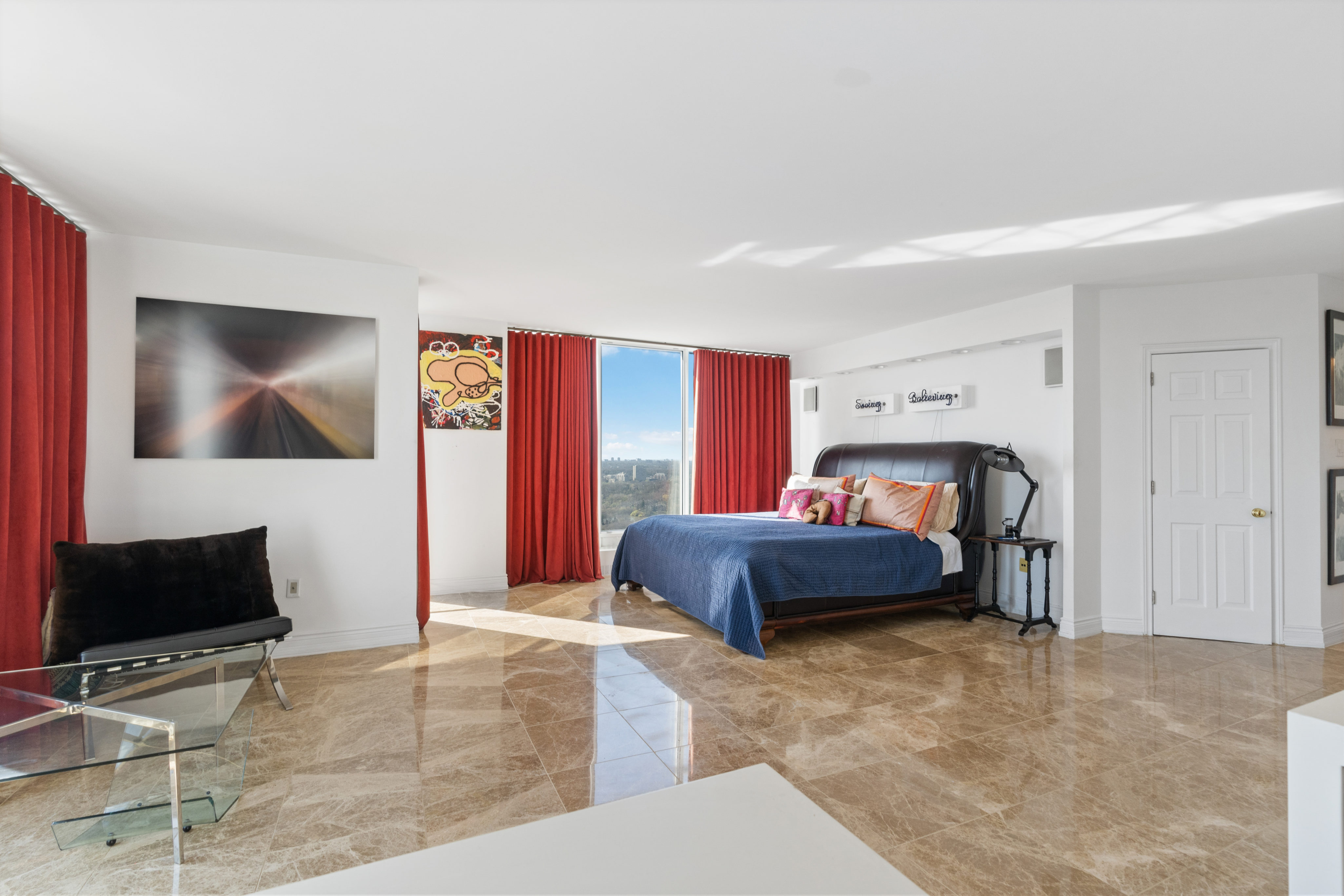 The upper floor primary ensuite has an oversized walk-in shower with a linear drain and a rainfall showerhead. It also has built-in benches and converts into a steam room: 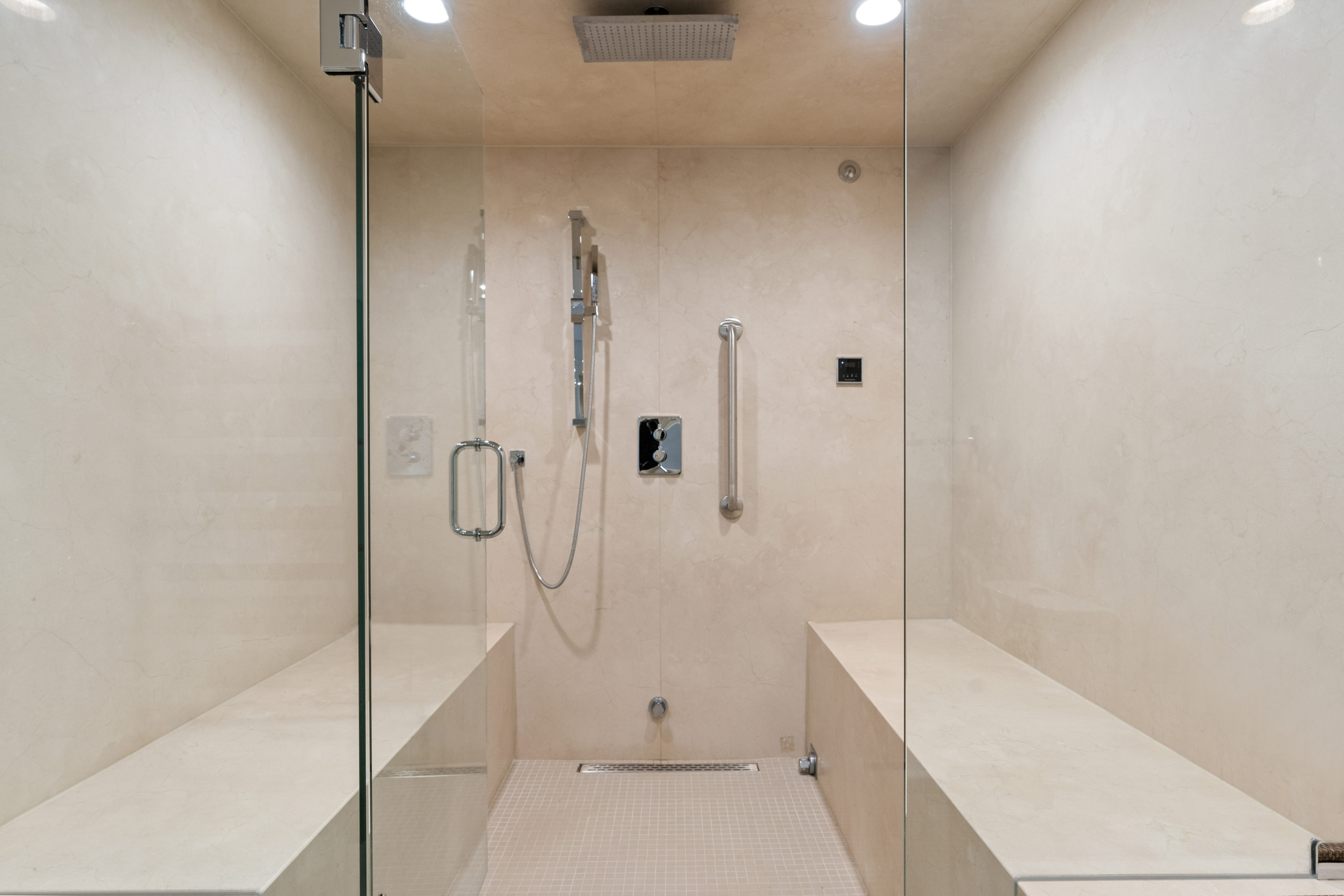 More art on the upper level: 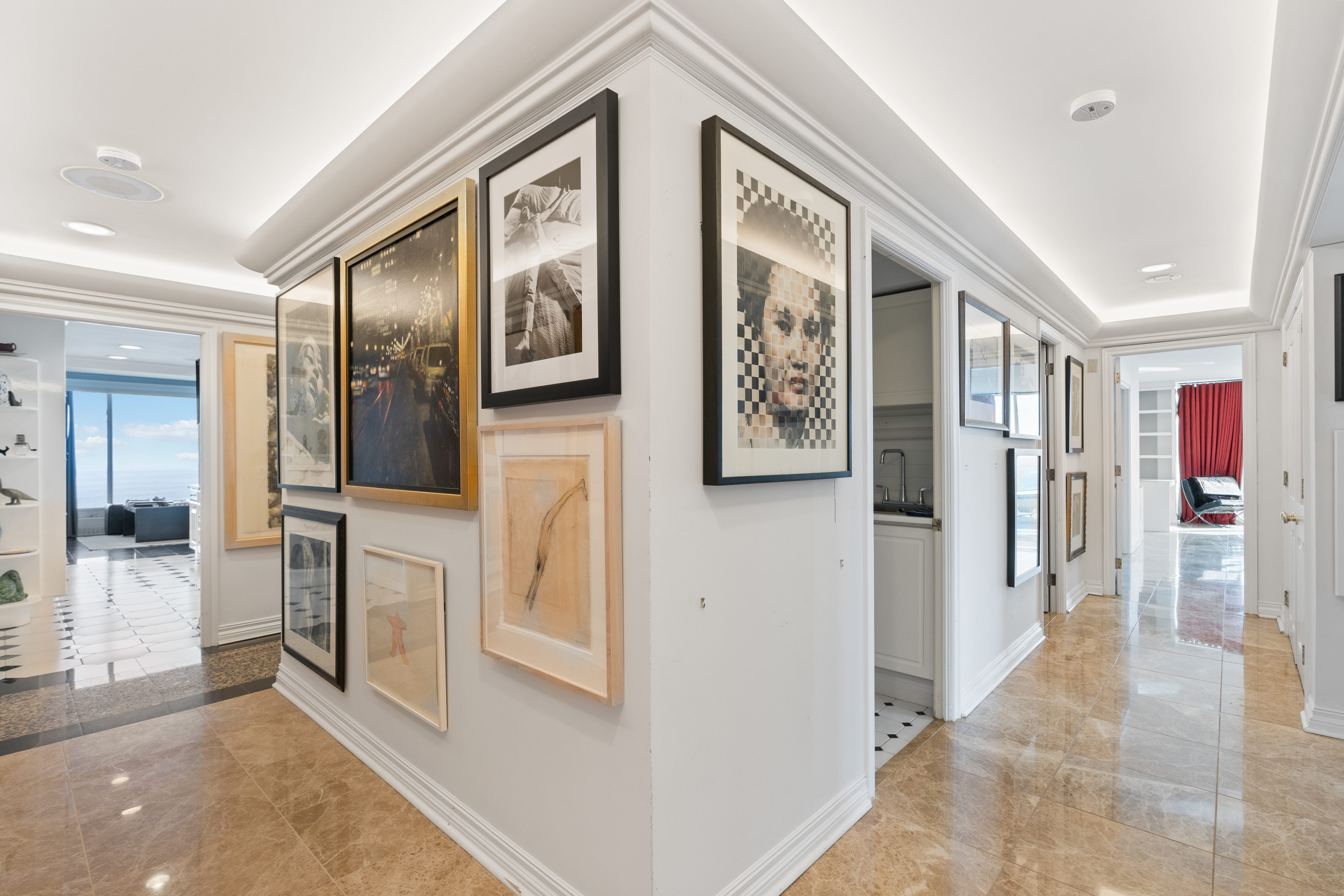 The kitchen on the upper floor has updated cabinetry with black granite countertops: 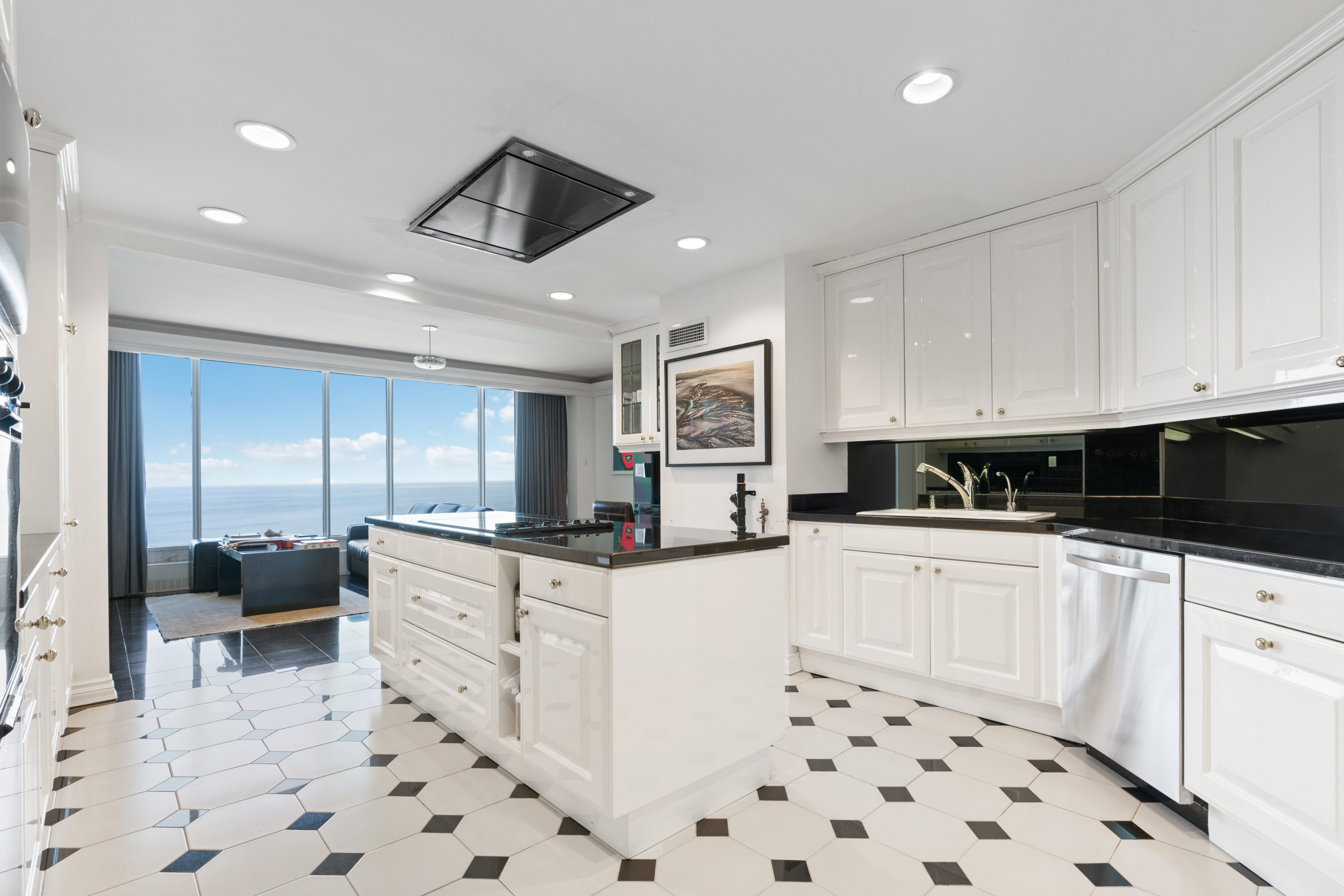 Here’s a view of the the Palace Pier towers. Bachir’s unit is in the north tower, on the left: 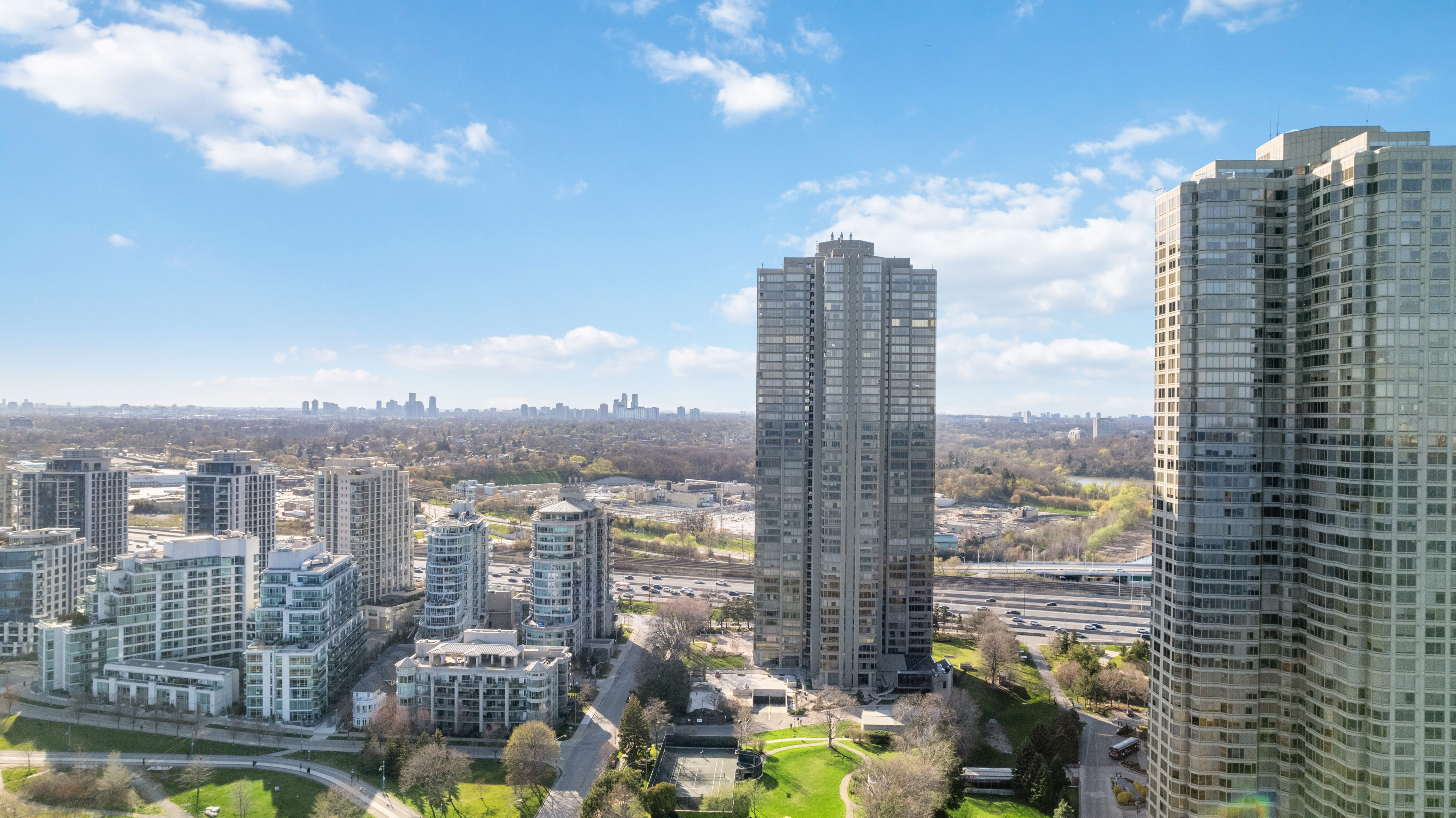