House of the Week: $2.5 million for a Victorian semi on a hidden Cabbagetown street

House of the Week: $2.5 million for a Victorian semi on a hidden Cabbagetown street

The place comes with a wine fridge, a rooftop terrace and parking—a rare amenity in this part of town

This home was built in the 1880s. The current owners bought it in 2014, then gutted and redesigned the interior in 2021 with the help of C3D. Now, they’re moving to Switzerland and looking to sell.

It’s on Wellesley Avenue, a cozy dead-end street on the eastern edge of Cabbagetown, not to be confused with Wellesley Street, its more famous namesake throughway. And the community here is close knit. “Kids play in the middle of the street,” says selling agent Christian Vermast.

Vermast and his team originally listed the place at $2,695,000 on September 27, but after receiving several bids under asking, they reduced the price to $2,495,000 on October 5. He’s hoping to find a buyer that embraces its high-end design elements. “The market also is a bit slower right now,” he adds.

The front door, with its stained-glass transom window, opens up to a small mudroom with Italian porcelain flooring. Next to it is a dining room with a bay window. There’s white oak plank flooring throughout the main and second floors. 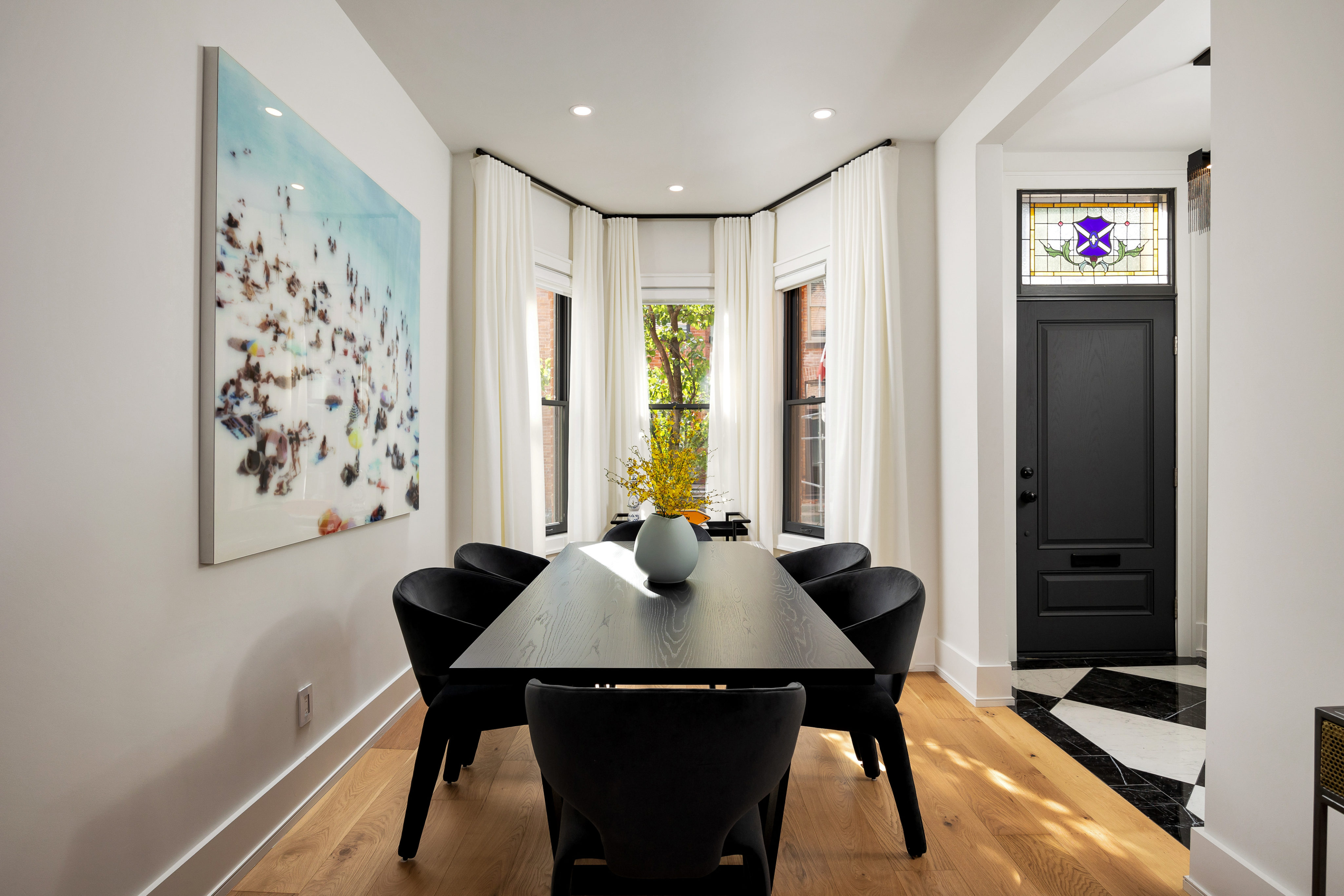 Just beyond the dining room is the kitchen, which comes equipped with ample cabinetry and a waterfall island with a built-in USB outlet. The kitchen was originally at the front of the home but was relocated here during the 2021 renovation. 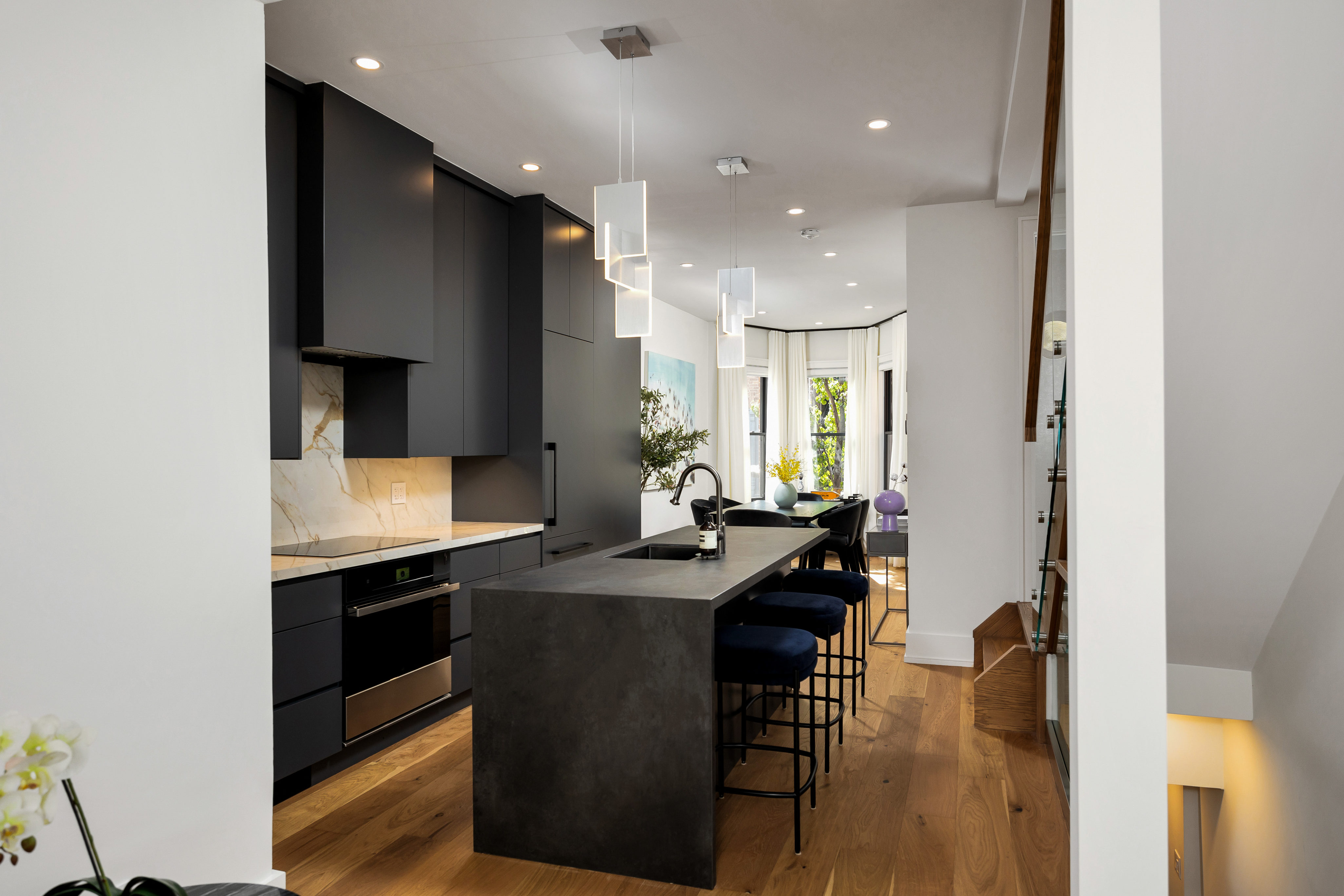 Here’s an opposite view of the kitchen. It has an Italian porcelain backsplash and Bosch integrated fridge as well as an induction cooktop and microwave drawer, both by JennAir. 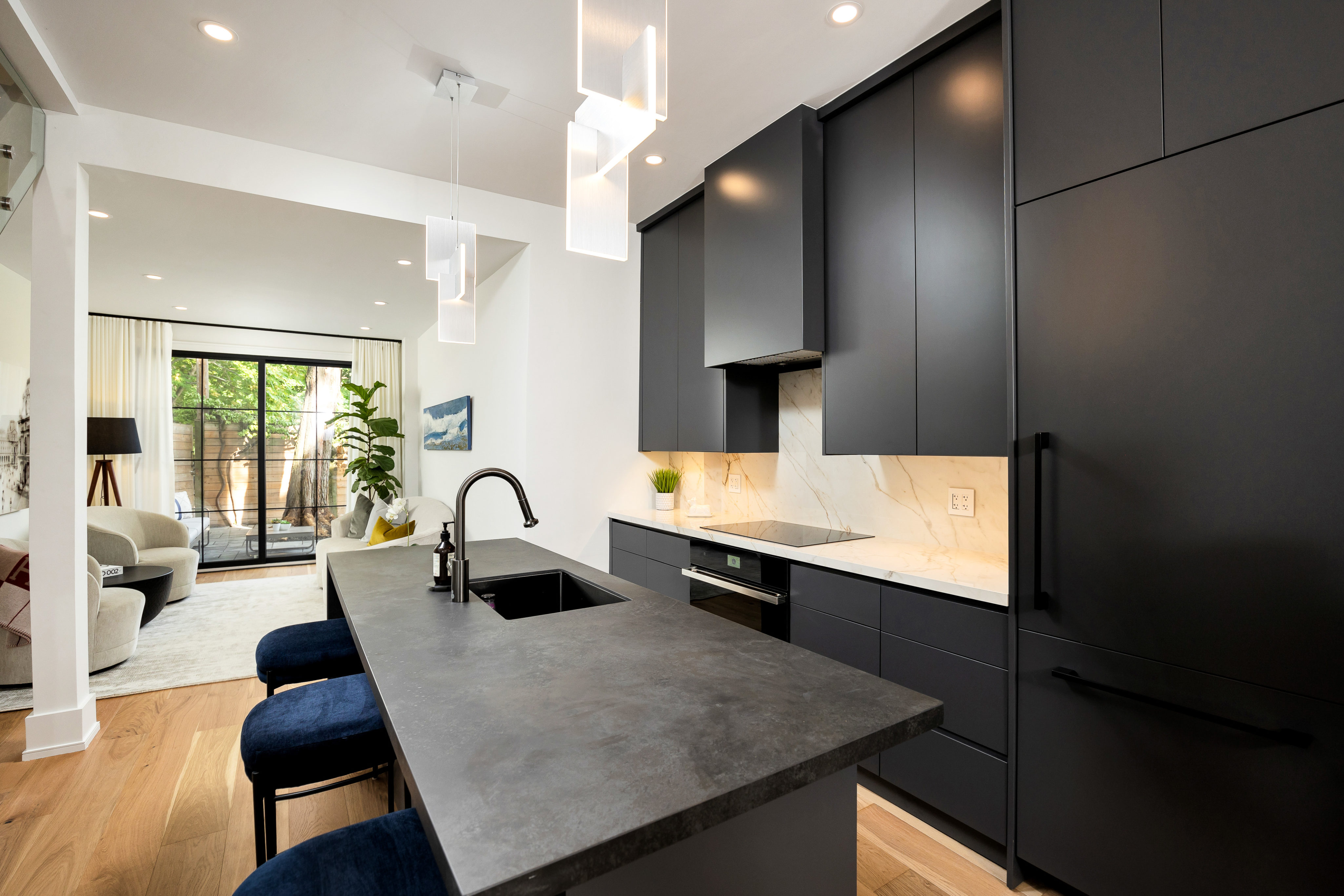 The living room is just past the kitchen. It has custom oversized doors that open to the backyard. Soundproof insulation was installed in the shared wall on the left, for extra peace and quiet. 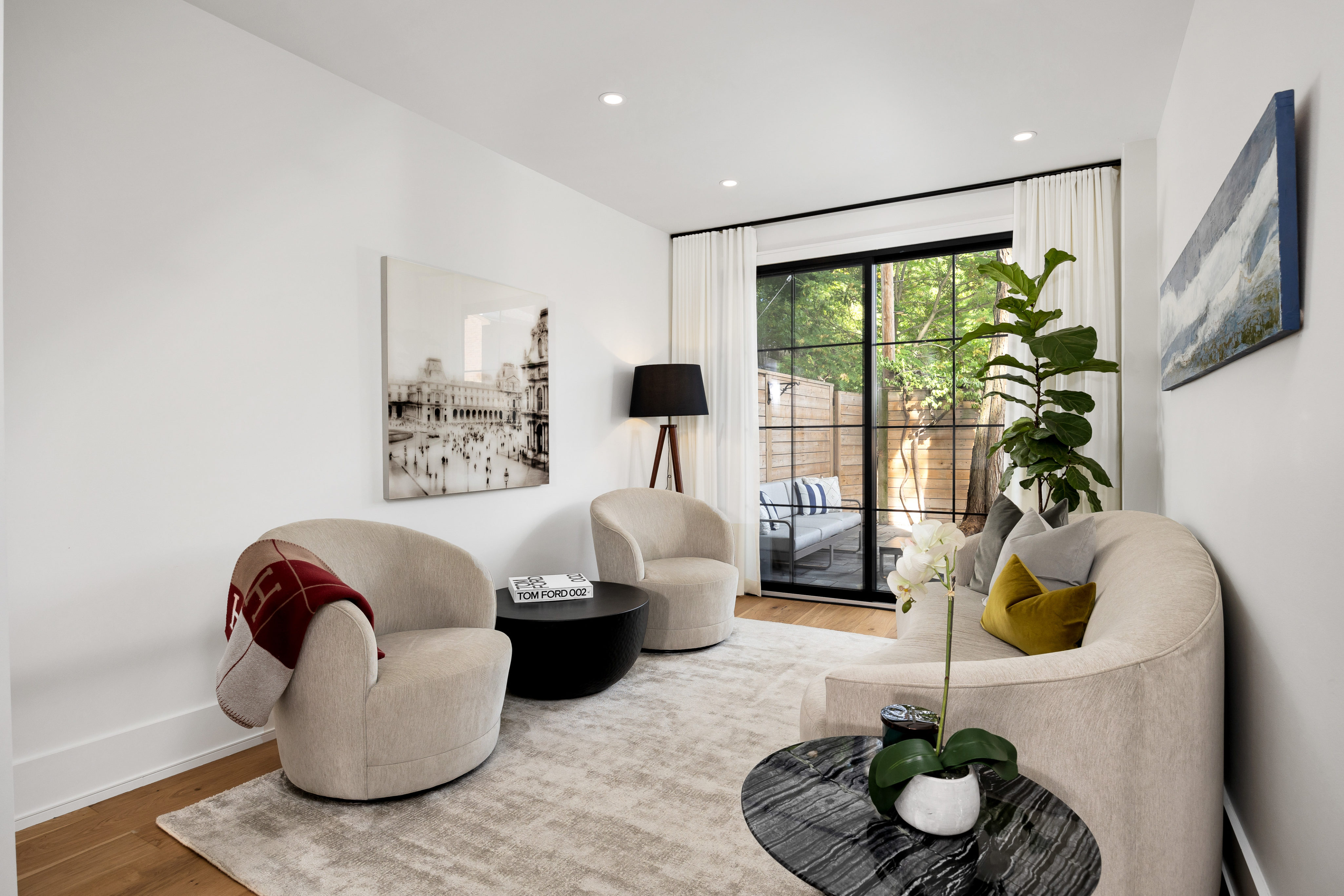 The backyard is fully fenced in. There’s also a gas barbecue outlet at the side of the house for cookouts and a parking spot just behind the fence. 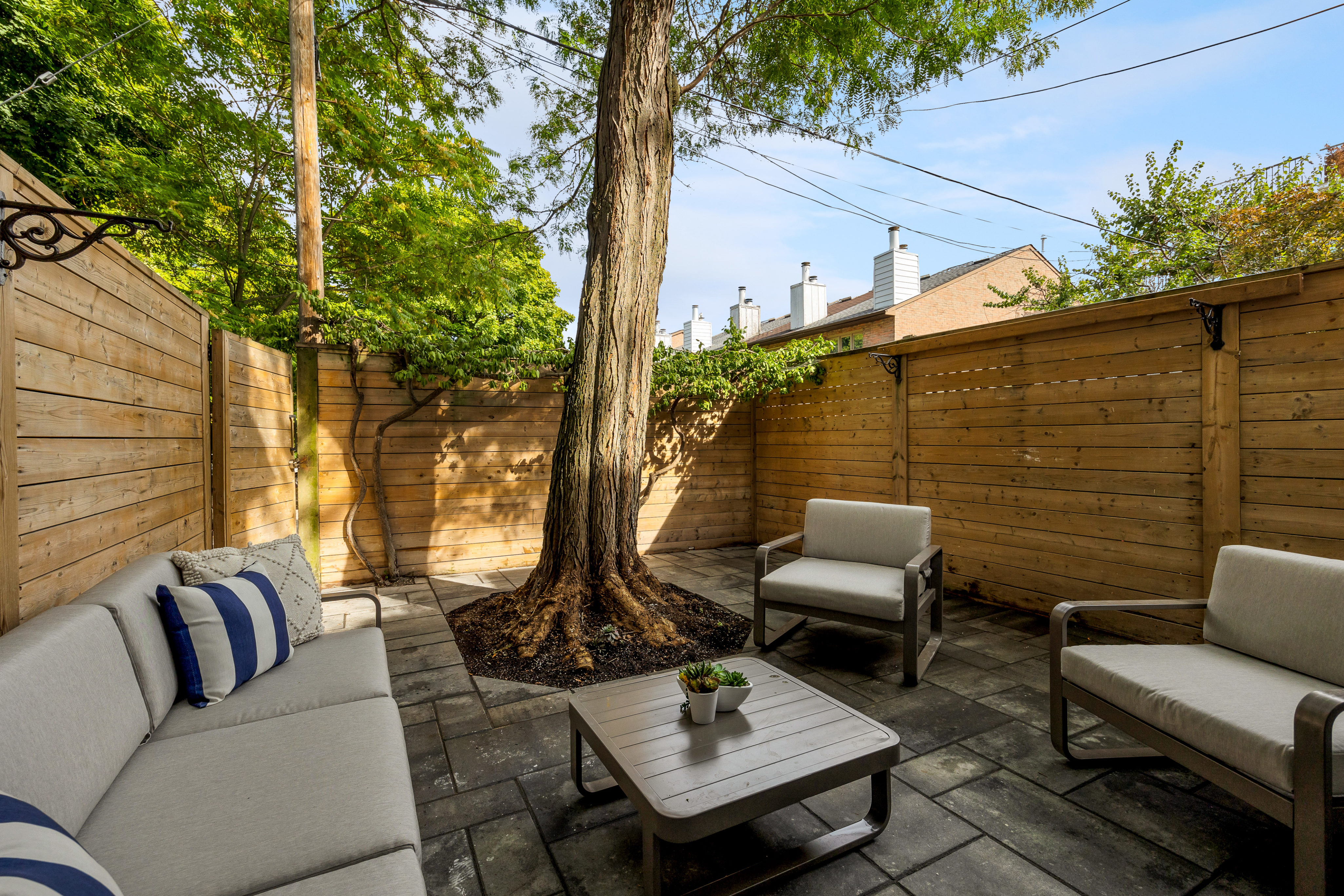 Also on the main floor is a powder room with a granite vanity, snake leather wallpaper and a black toilet to match. 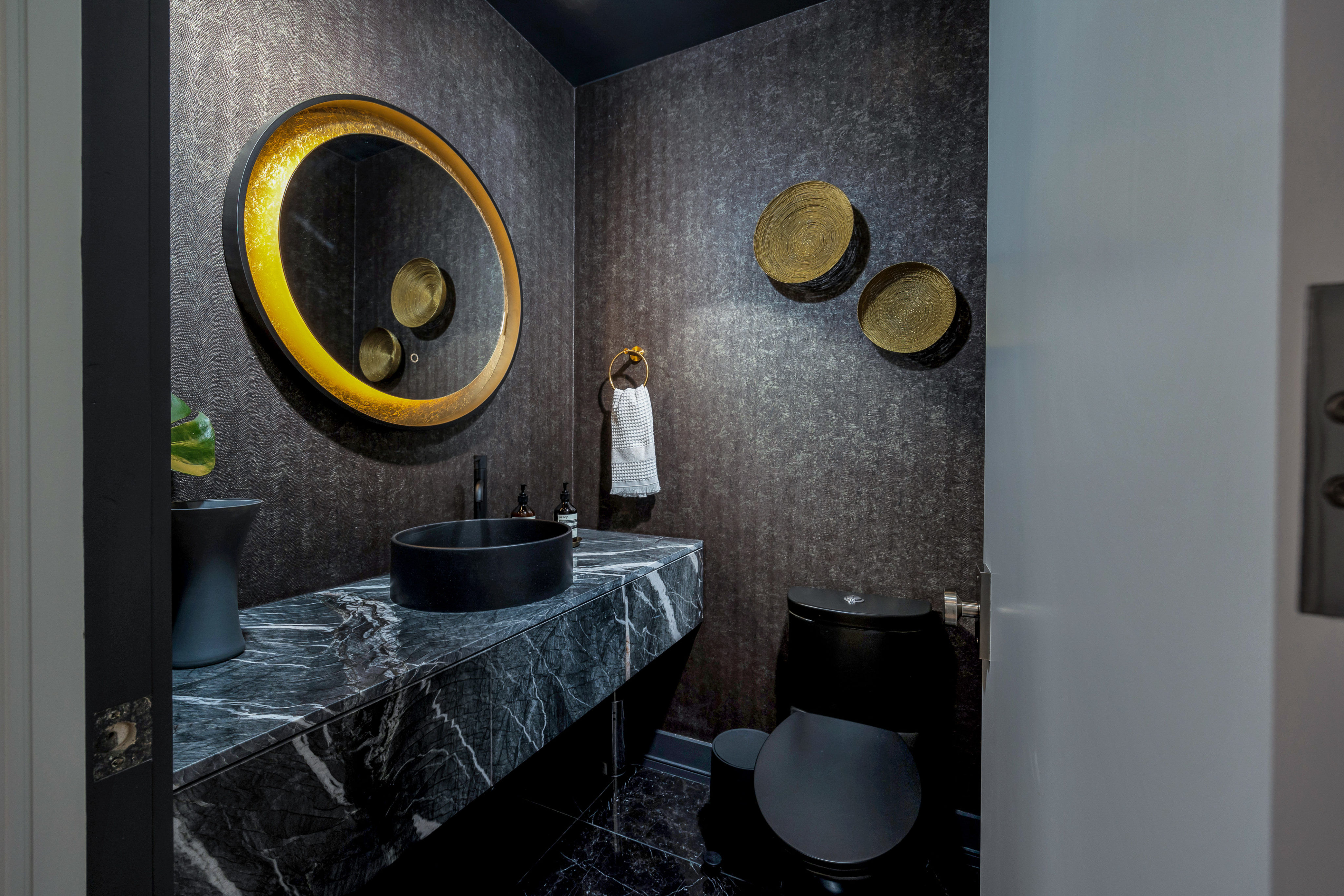 Here’s a view of the stairwell from the second floor. Glass railings keep things open and airy, and there’s under-mount lighting on each step. 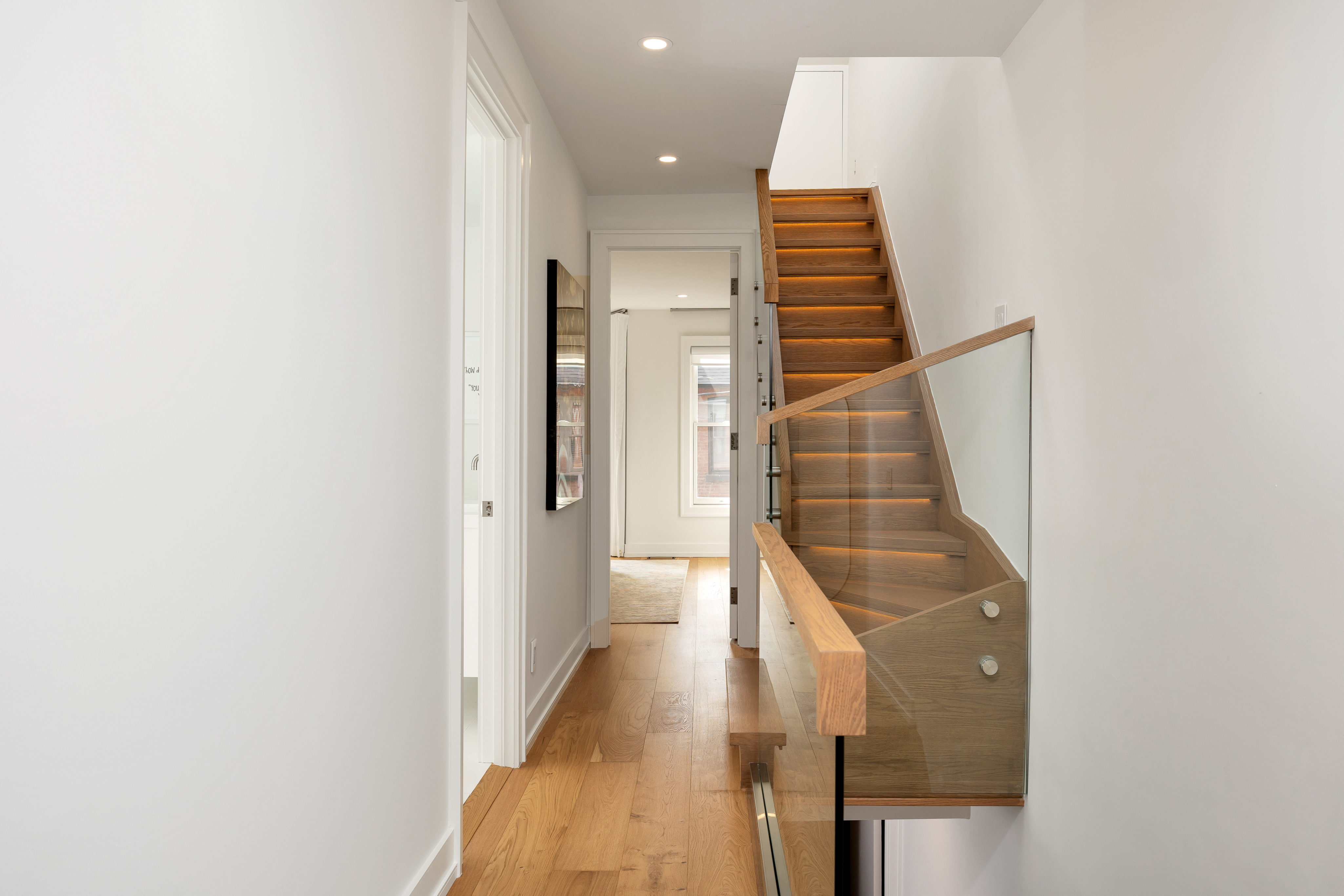 The main bedroom overlooks the street. It has a bay window and wall-to-wall, floor-to-ceiling closets. 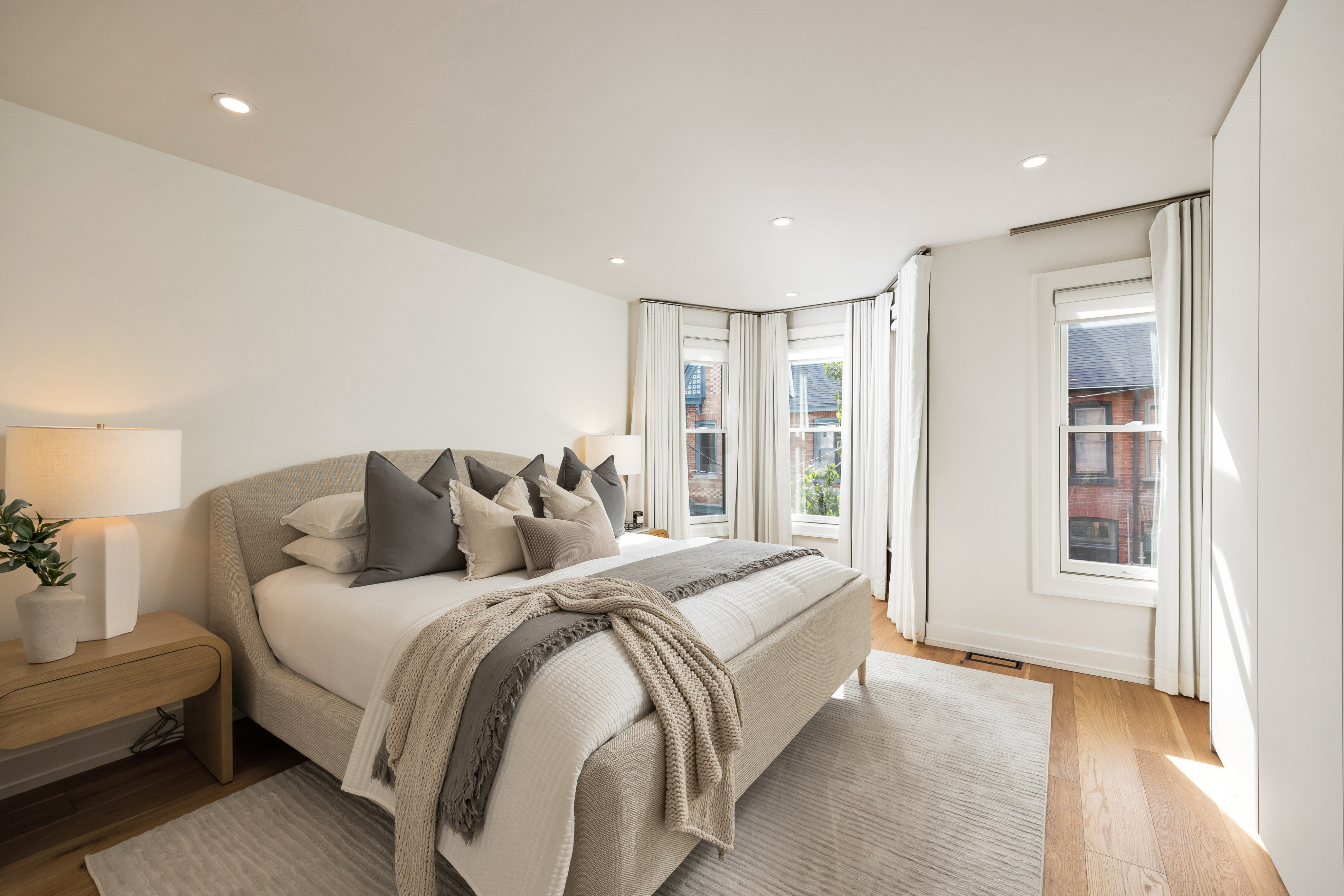 There’s another bedroom on the second floor, a few steps down the hallway. 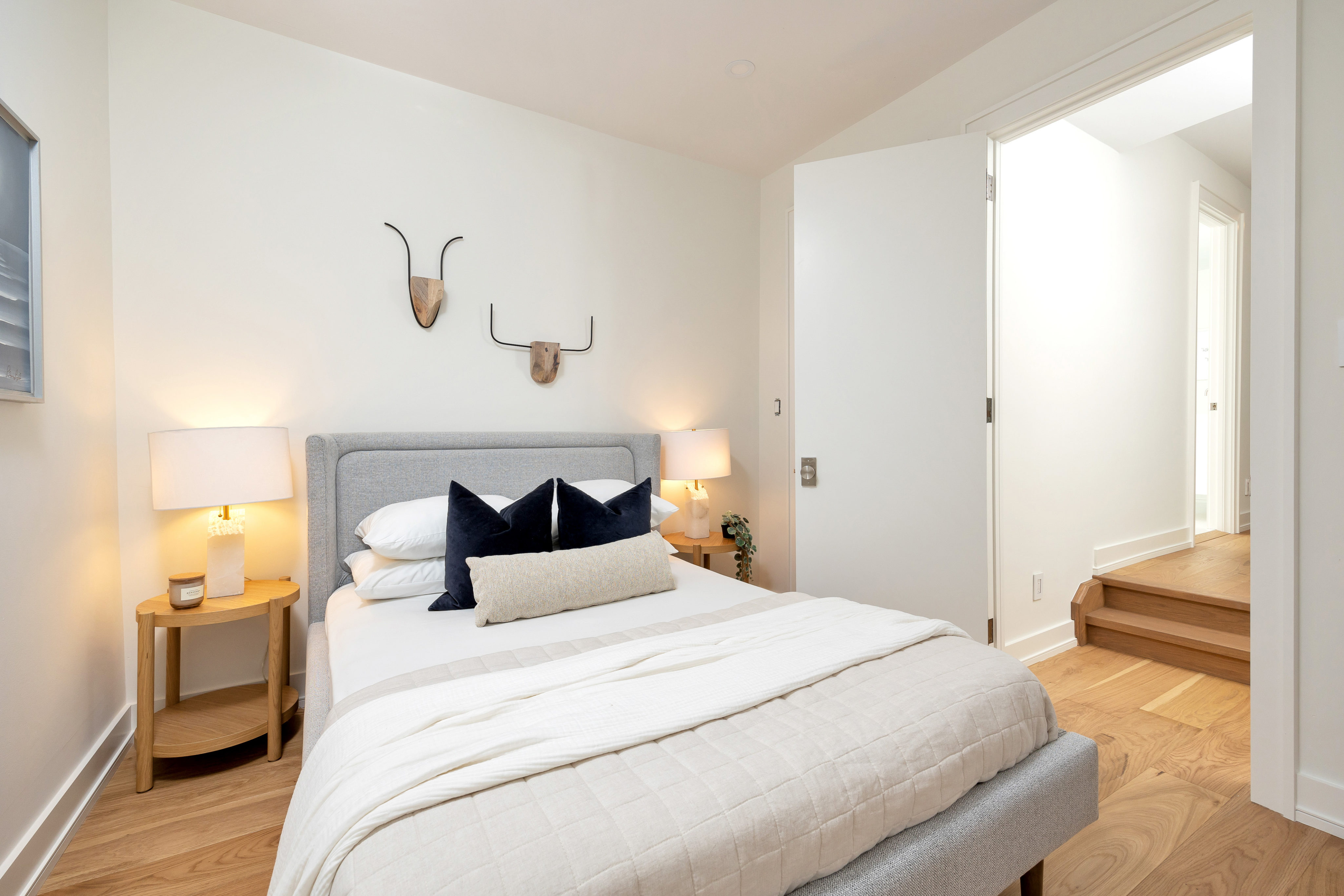 The second floor originally had two small bathrooms, which were combined to create one large space shared by both bedrooms. It has a double vanity with soft-close drawers, a soaker tub and a separate glass shower with a rain shower head. 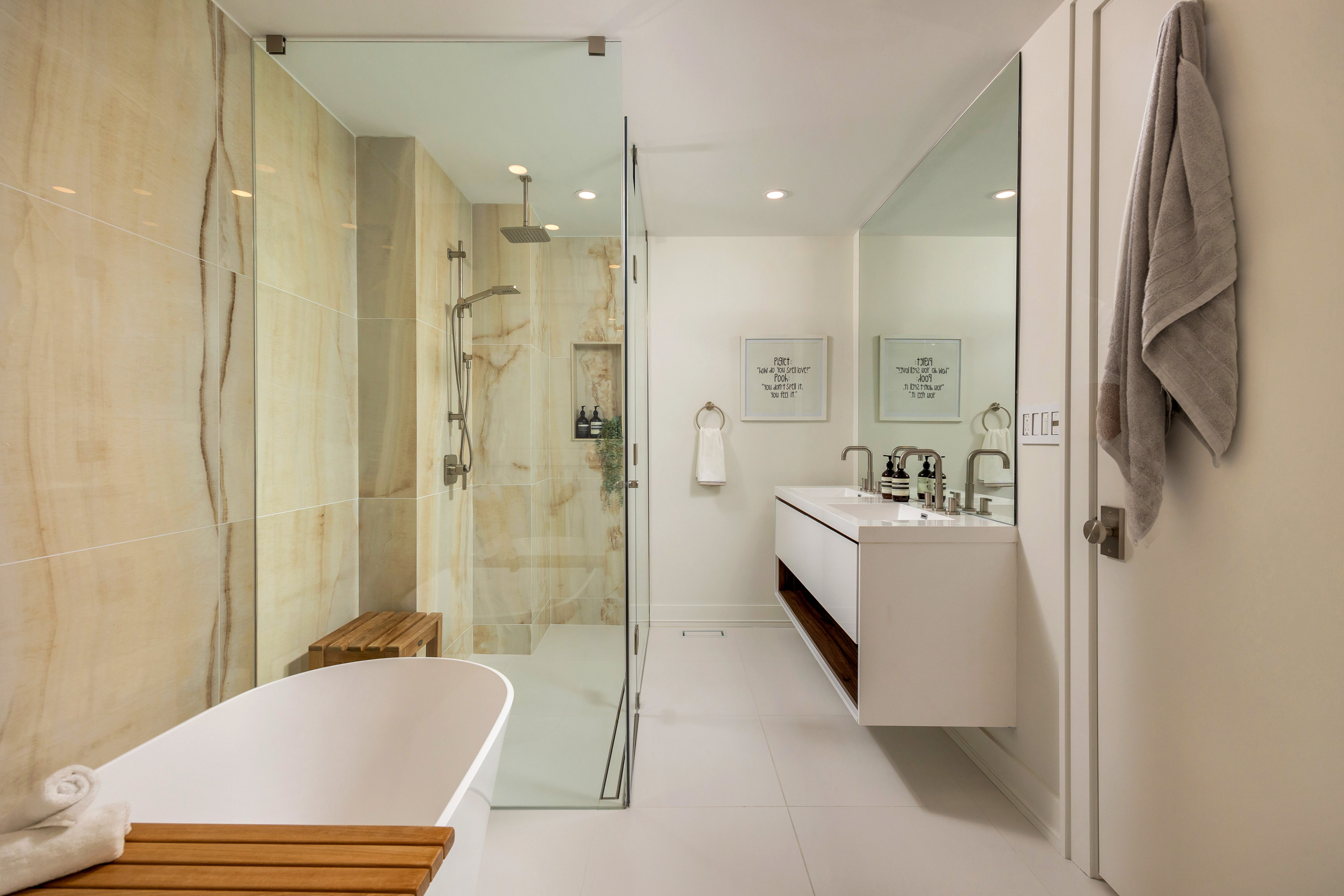 The third-floor stairwell opens up to this family room, which could also be used as a bedroom. It has more of those oversized doors, this time leading out to a rooftop deck. 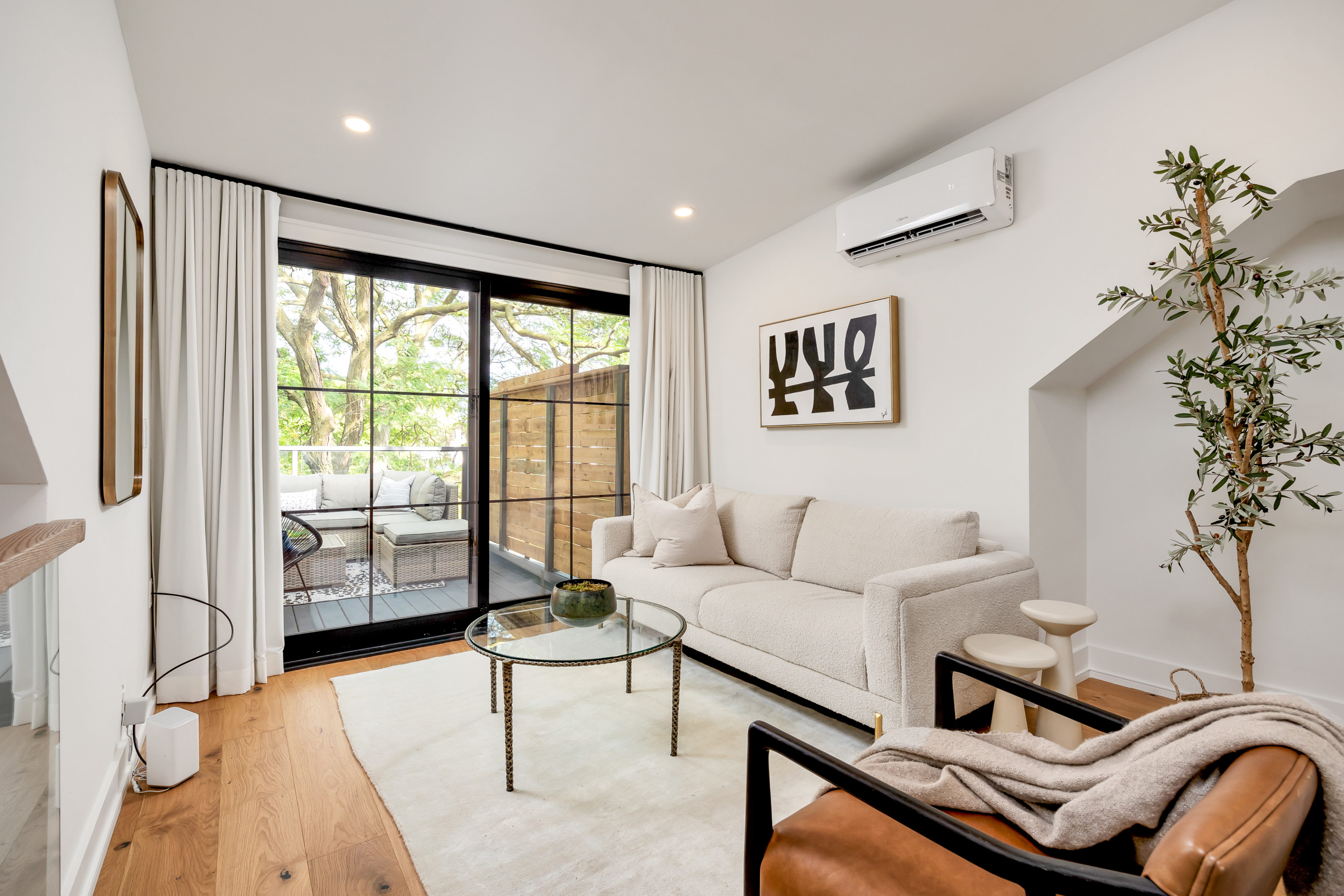 Here’s that rooftop deck—serene and private. 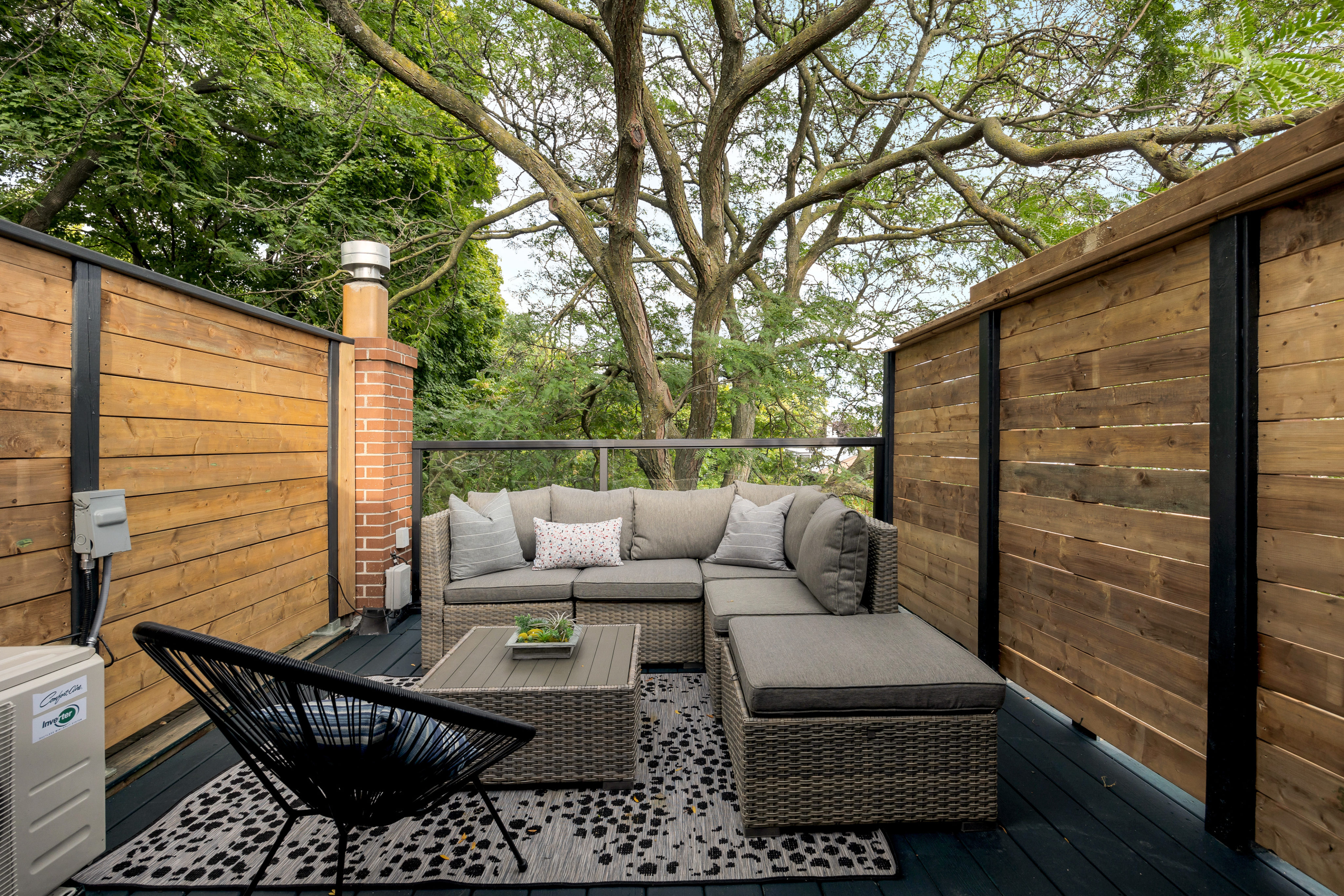 Another view of the roof, looking into that third-floor family room. 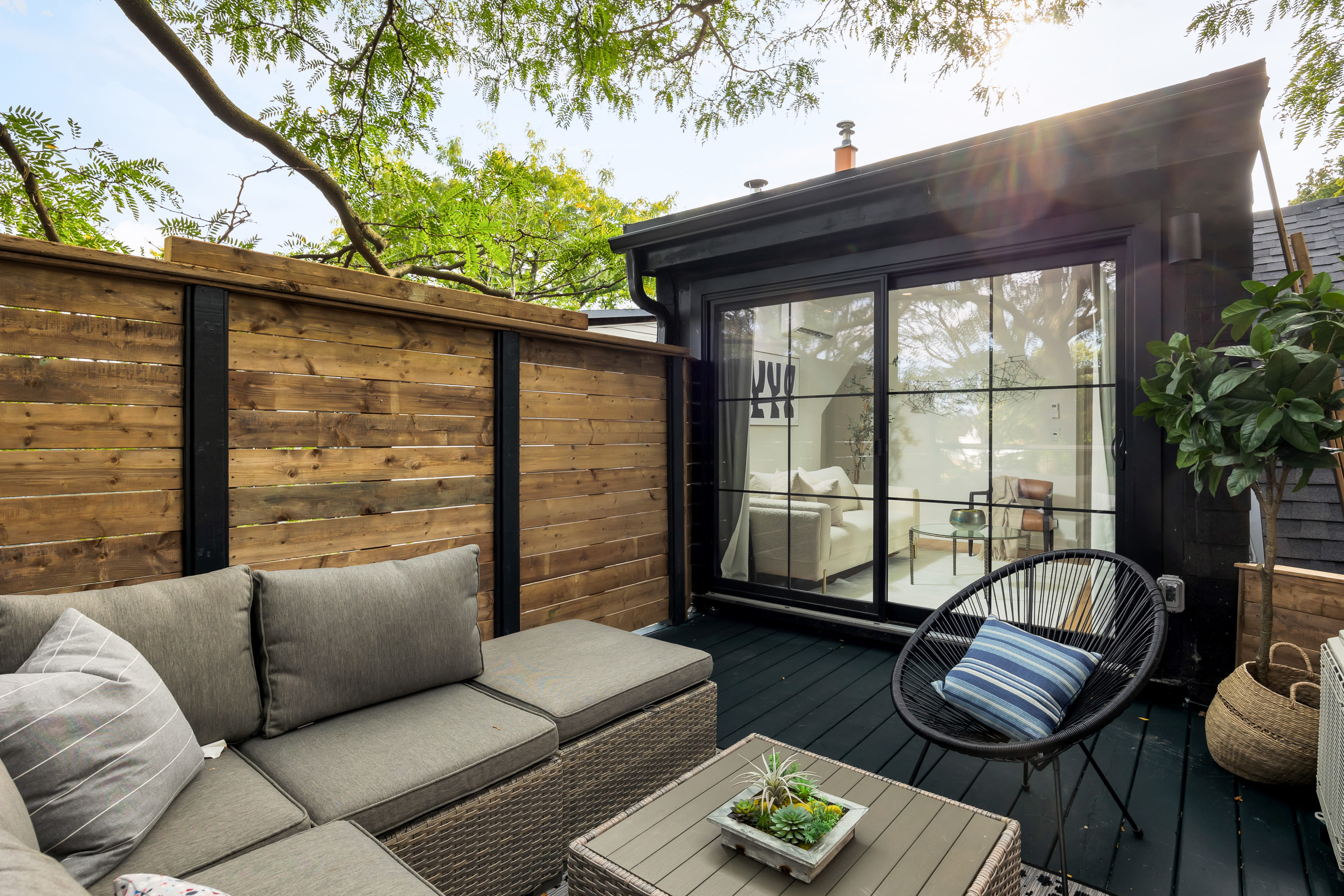 There’s also a bathroom on the third floor with a walk-in shower and built-in shelving. The second- and third-floor bathrooms have heated floors. 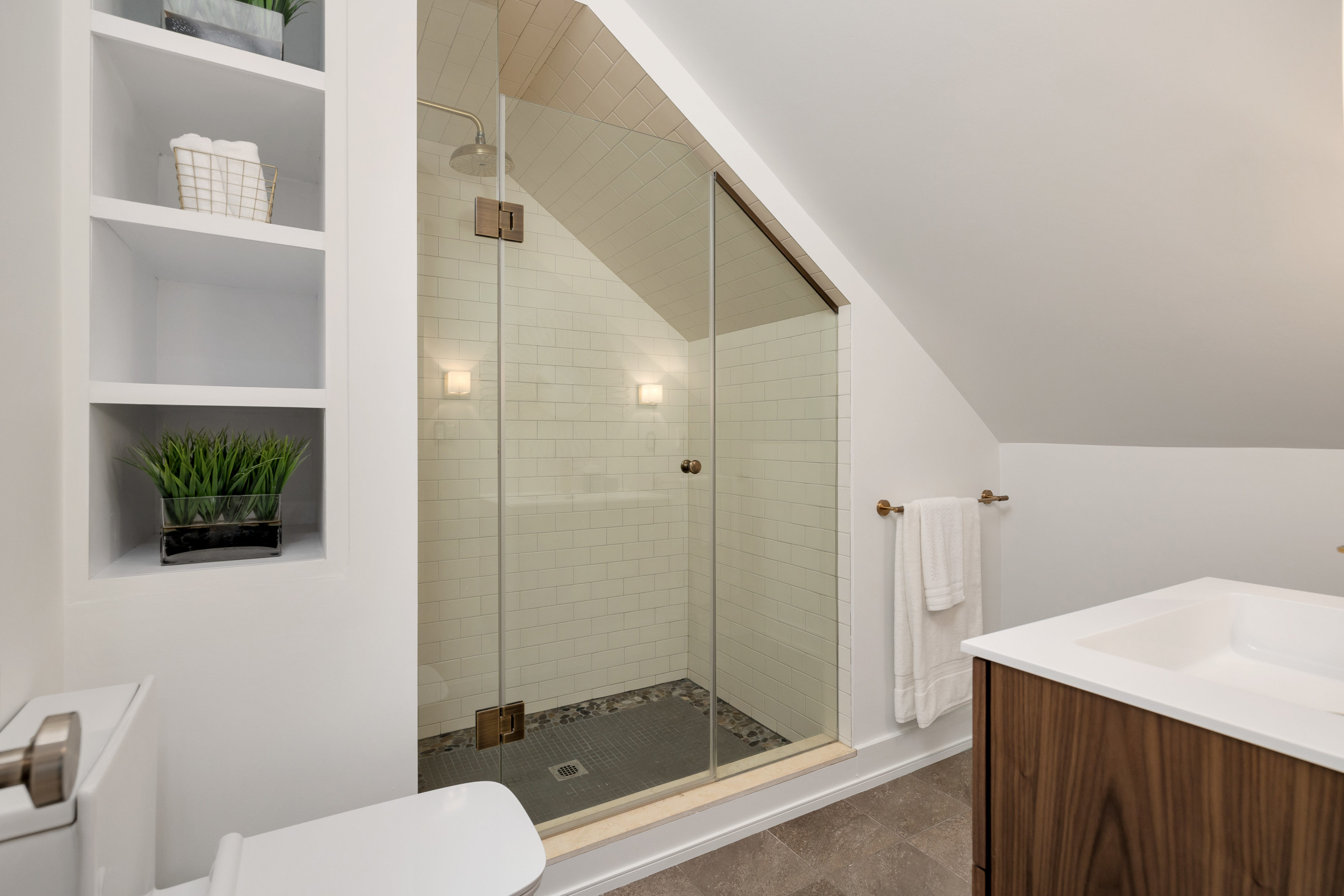 The laundry area is in the basement. 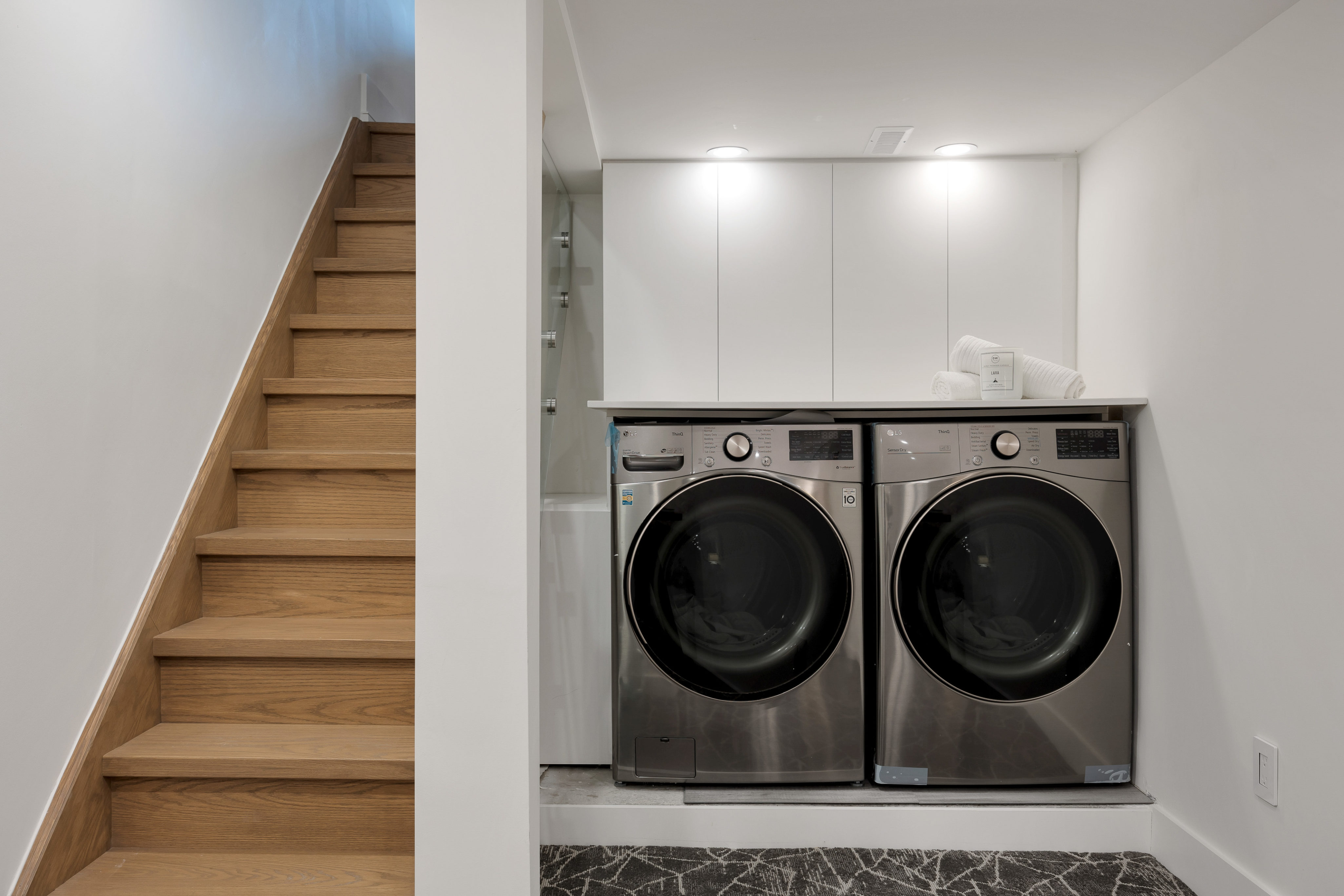 Those two doors lead to a utility room and a storage area. The basement has carpeting throughout. 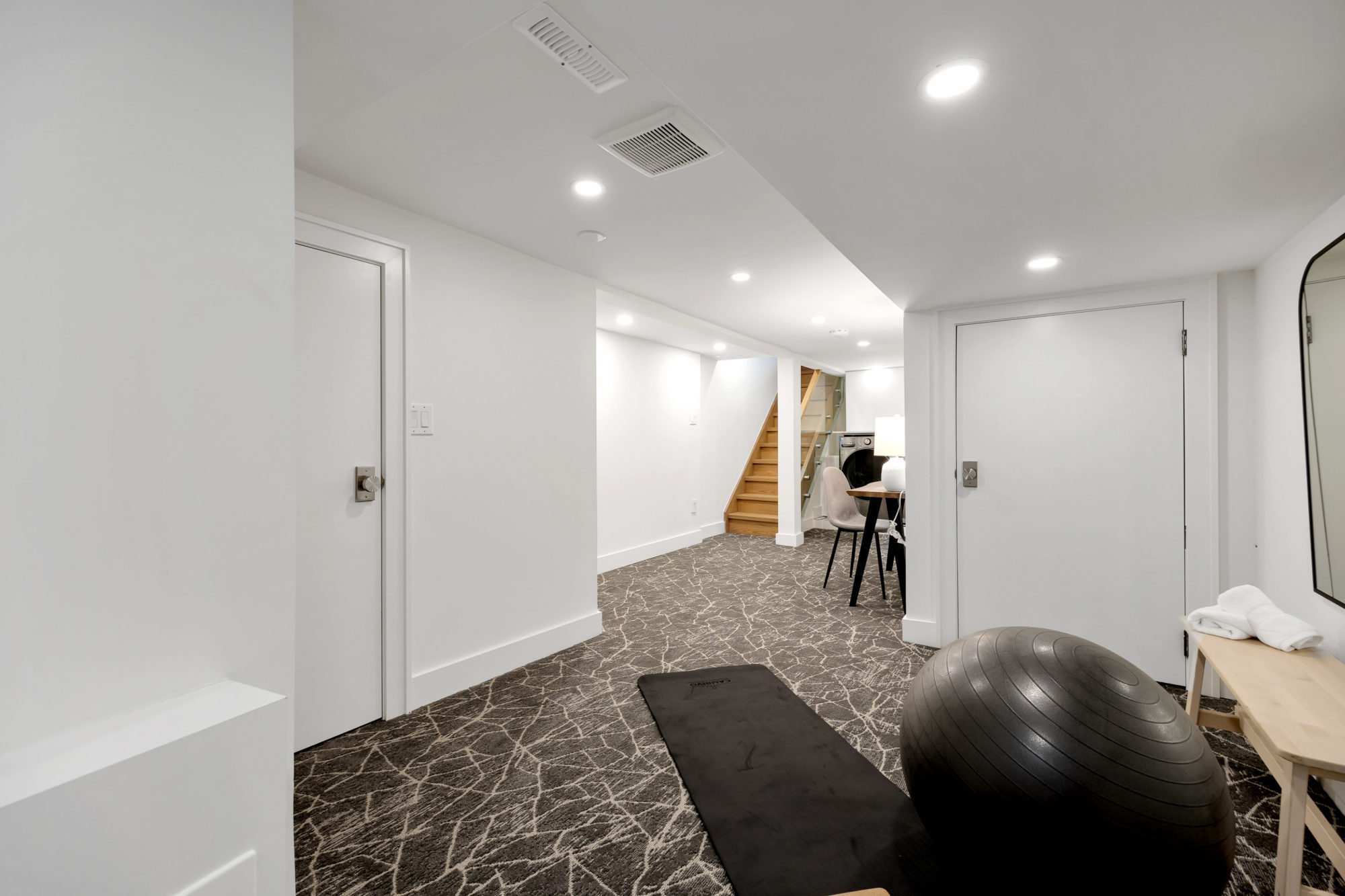 There’s also a rec room with a wine fridge at the bottom of the stairs. 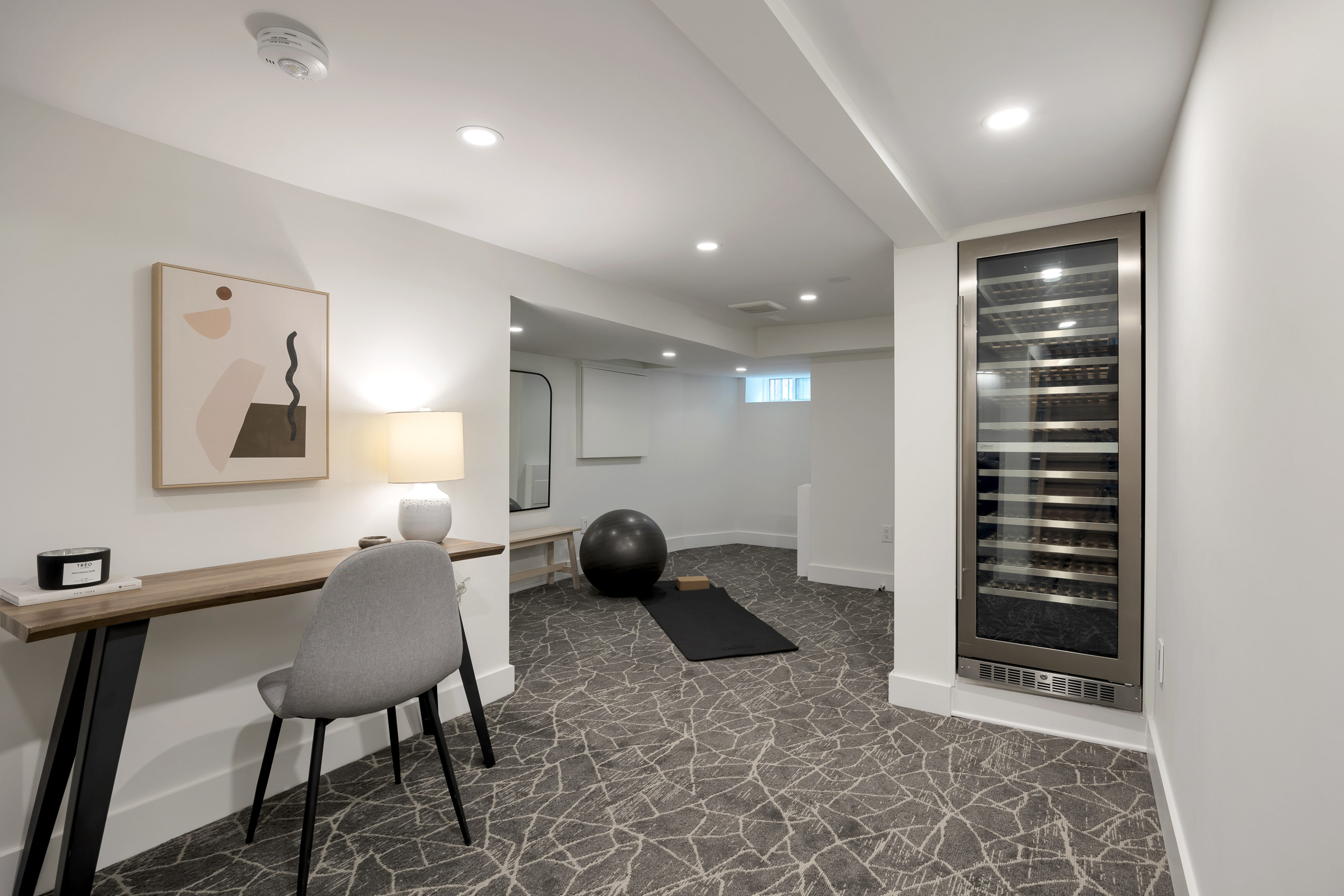