Drake has long been rumoured to be building a dream mansion somewhere in Toronto. The notion first entered wide circulation back in 2014, when Rolling Stone mentioned, in the course of a story about the rapper’s other massive house in Los Angeles, that he was “in the early stages of building a place on [Toronto]’s outskirts.”

Thanks to some sleuthing by the Globe, we now know “the outskirts” is almost certainly Park Lane Circle, not far from the Bridle Path, where Drake appears to be making ready to demolish an existing mansion and build his YOLO-compatible pleasure palace in its place. Here’s everything we know.

Drake seems to be getting more sophisticated about property ownership

When Drake owned a condo at 1 St. Thomas Street in Toronto (he sold it for $3.75 million in 2013), the property was registered in his personal name, Aubrey Drake Graham. His Hidden Hills, California estate, which he bought for $7.7 million in 2012, was also registered in his personal name. For privacy reasons alone, it’s unusual for anyone as famous as Drake to be this open about their real estate purchases. There are many legal ways to keep an owner’s name off a home’s title in Ontario. Cindy Crawford, for instance, holds her Lake Joseph cottage in the name of a trustee, her business manager Lester Knispel. 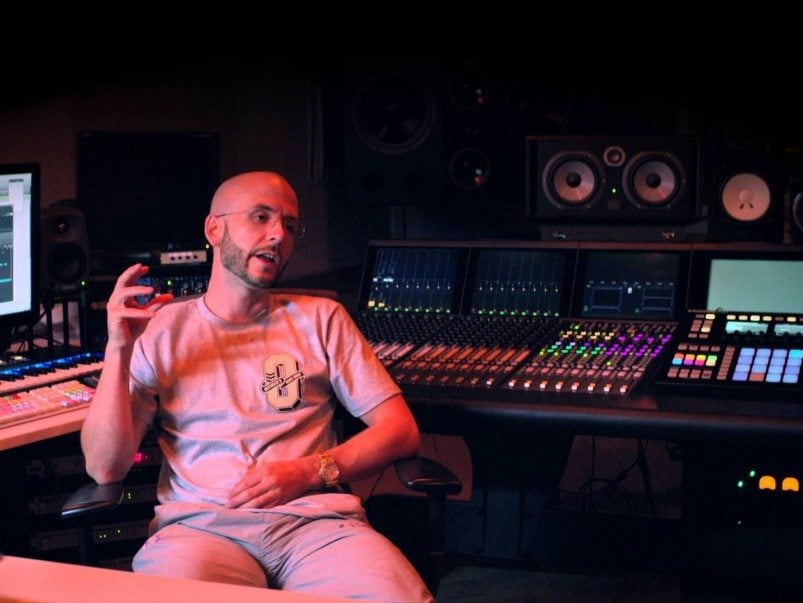 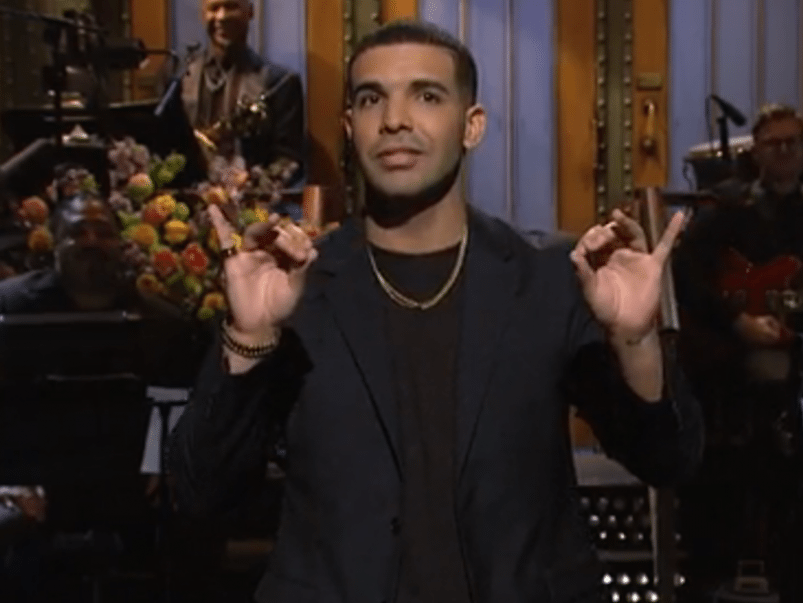 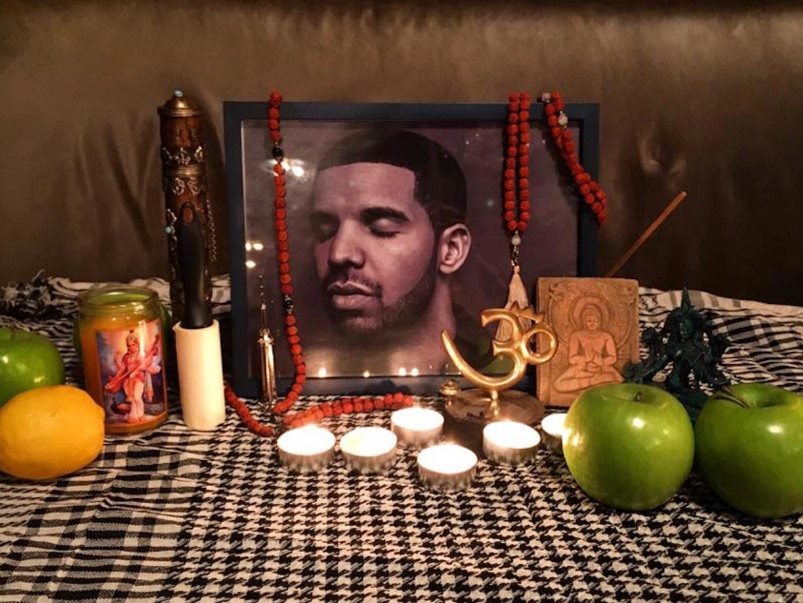 This time around, Drake seems to have chosen to do something slightly trickier. Someone created a numbered corporation based in Halifax and bought 21 Park Lane Circle through the corporation. The registered owner of the property is “3287650 Nova Scotia Company,” a name unlikely to arouse much curiosity. The only reason it’s possible to link the company to Drake is that one of its listed directors is Adel Nur, which is the birth name of Future the Prince, one of Drake’s lieutenants. It’s impossible to say definitively that the house does belong to Drake, because he hasn’t confirmed it personally. But Nur’s name, combined with other facts about the project—not least its massive scale and expense—make the rapper’s involvement overwhelmingly likely.

Drake bought the place in 2015

Property records show that the sale closed at the end of September 2015. Drake paid $6.7 million, which is $970,000 more than the previous owner, Kuidou Wu, paid in 2014. That’s a 17 per cent price increase in about a year and a half, which is a healthy gain by recent Toronto standards. It’s possible the extra few hundred thousand dollars weren’t of concern to Drake.

In a larger sense, though, the purchase may have been a bargain. Drake paid $825 per square metre of land, which is still relatively cheap for the area. And the land, we now know, is the only part of the existing property he plans on keeping.

The property is being rebuilt from scratch

According to drawings filed with the city, Drake’s plan is to raze the existing mansion at 21 Park Lane Circle and build a completely new, 21,000-square-foot home in its place. The new mansion is being designed by Ferris Rafauli, a local architect who previously designed Sher Club, Drake’s lounge at the Air Canada Centre.

Rafauli’s signature style, heavy on stone cornices and imposing, near-vertically sloped roofs, can be spotted at the ends of gated drives throughout the GTA. He’s currently putting the finishing touches a new mansion near the Oakville lakeshore for the philanthropist Michael DeGroote.

Rafauli’s plans for 21 Park Lane, though, are far beyond what’s normal even for a house of this calibre.

The main floor is standard for a Bridle Path mansion. There’s a central foyer and great room, a library, and plenty of living and dining space. The interesting parts are the awards room, the “snack lounge” (whatever that is), and the separate “security suite”—a private room with its own separate side entrance, where presumably Drake’s security detail will sleep or hang out. 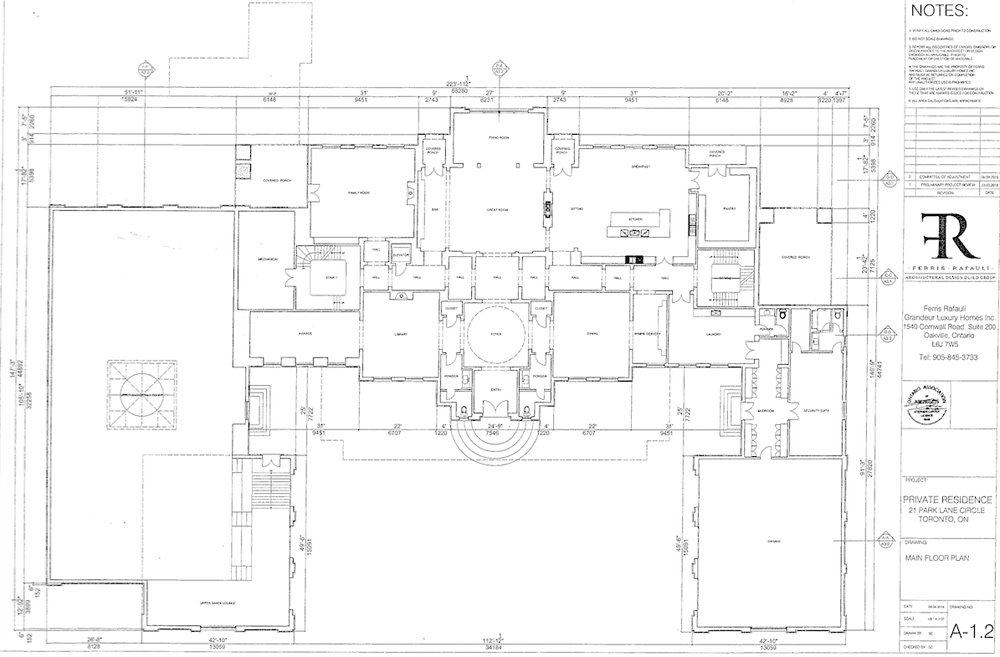 The upper floor plan shows what Drake envisions for his bedroom, and it’s predictably huge. The master suite is a warren of connected spaces, including a giant master bath, a steam shower, two dressing rooms and two private terraces. 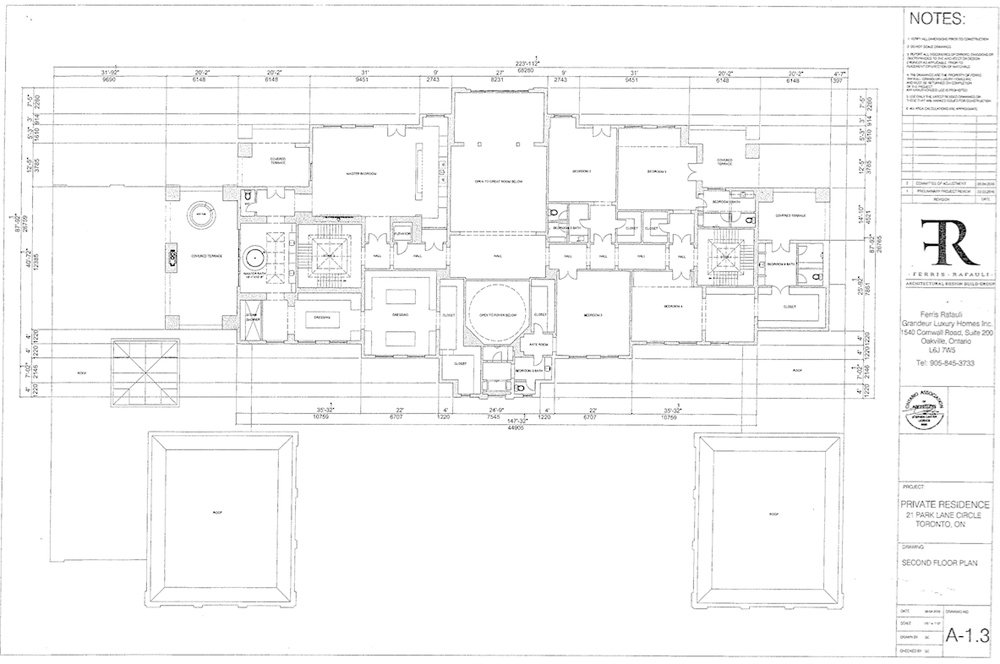 The lower floor is where all the recreational facilities are. Down here, there’s going to be what looks like a full-sized basketball court, a “jersey museum” (presumably for sports memorabilia), a home theatre, and a spa retreat with two different kinds of saunas. The pool and hot tub are in a colonnaded hall that looks as though it will rival Drake’s Los Angeles swimming facilities for luxury.

It’s not a done deal yet

The house is so large that it violates a number of zoning restrictions on building height and driveway width. Before construction can begin, Drake’s people will have go to Toronto’s committee of adjustment for a variance—in other words, official permission to violate the zoning bylaw in a minor way. Part of that process involves telling all the neighbours about the details of the project and giving them a chance to object. They’ll have that opportunity at a committee of adjustment hearing, currently scheduled for May 26.

Park Lane Circle is an extremely mansion-friendly part of town, though. (Conrad Black’s 23,000-square-foot pile is practically in this place’s backyard.) It’s safe to assume that the mansion plans will sail through relatively unscathed.