Most of the time, Magna International CEO Donald Walker and his wife, the reality TV personality Joan Kelley Walker, live in their King City mansion. In 2014, they decided their two-­bedroom pied-à-terre at the Thompson Residences wasn’t roomy enough for the few nights each month they find themselves downtown, so they splurged on a luxe West Queen West townhouse to use instead. The place was one of four 100-by-25-foot units in a former button factory. When they bought it, it was an unfinished shell. Joan worked with architect Brad Netkin on the interior structure. “We didn’t want it to seem like a long, skinny bowling alley,” she says. They carved two new mezzanine levels out of the three-storey space and arranged them around a central glass staircase. The main level is solely for shindigs, with a sleek onyx bar, catering kitchen and billiards table. The second floor has a massive dining area with six tables that can seat over 30 guests. Across a glass walkway is the master bedroom, a theatre, a gym and two guest bedrooms. The top floor has the Walkers’ personal kitchen, an intimate dining area, a hot tub–equipped deck and an airy, art-filled living room. This interior arrangement allows the couple to throw epic bashes without guests traipsing into their private spaces in search of a bathroom.

The pendant chandeliers are from Nienkämper: “I like blank walls with a bit of texture, so that the art can really pop,” Joan says. This piece, which hangs in the entranceway, was created by local visual artist Alexis Jardin: The couple love the natural light in their master suite, which has his-and-hers walk-in closets and a soaker tub that looks out onto a west-facing balcony: The private kitchen on the third floor is where the Walkers do their non-party-related food prep: Here’s a view of the downstairs entertaining space: Joan handled most of the decor, but the motorcycle, a 2007 Big Dog, was all Don. He rides his other bikes, but this one is just for display: “I want to set the record straight so people understand the severity of the situation, especially when communication from the government has been inconsistent at best”

A dilapidated Forest Hill estate gets a thoroughly modern makeover

An ode to mid-century design, built from scratch

This couple turned their $1.7-million Playter Estates property into a Crayola-coloured fun house 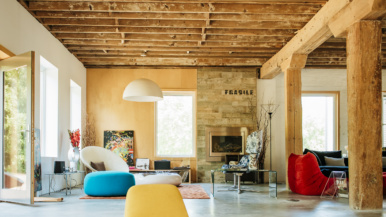 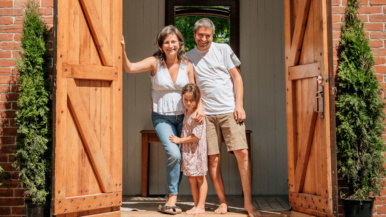 This couple bought a decommissioned Methodist church for $95,000 and turned it into a home