A 2,000-square-foot cottage on Stewart Lake in Muskoka. The four-bed, two-bath bungalow has 170 feet of fishable waterfront and a detached sauna.

Chris Weir, 67, a retired aesthetician and her husband, Bob Weir, 75, a stock broker 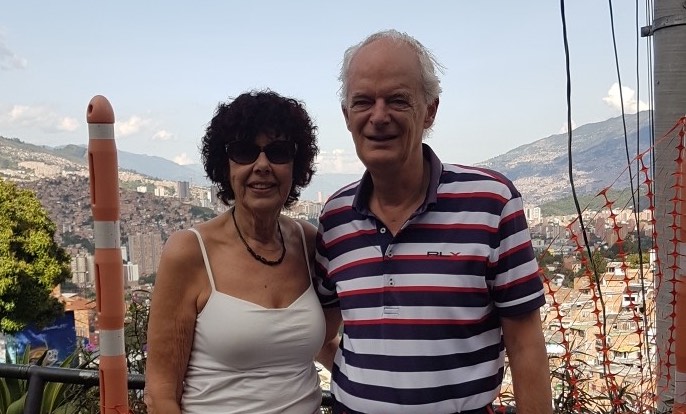 In 2007, Louise Rivett, a former insurance executive, bought the place for $300,000. At the time, it was a two-bed, one-bath bungalow without a deck. Rivett spent the next year making upgrades, including removing the drywall to expose the original 1930s fireplace, and hiring a contractor to install pine floors throughout and build a back deck. Then, in 2013, builders added a 750-square-foot extension with a family room, two bedrooms and a bathroom. Rivett originally planned to live out her retirement in the home—but then the pandemic hit. In March, when her trip to Europe got cancelled, Rivett got stuck at home. One day, while out for a walk in the area, she came upon a nine-acre property for sale in a forested area. She liked the idea of living in a nature-filled environment, and decided to purchase the woodsy property and put the Stewart Lake bungalow on the market.

In early 2020, Bob and Chris, who live in Moore Park, were considering a trip to Russia. Then, of course, the pandemic put a damper on any travel plans. After spending months in isolation, Bob thought it would be the perfect time to realize his life-long dream of owning a cottage. Plus, with some recent success in the stock market, Bob had some extra cash to invest in a retirement property. He figured that a cottage would provide a nice weekend getaway, since it’s unclear when international travel will resume.

On June 5, Bob’s agent sent him listings for properties near lakes in Orillia, but he thought they were too house-like, with multiple storeys and finished basements. Bob wanted a place that felt like a cabin, with a sandy waterfront and a dock where he could watch the sun rise over the water. Owing to his recent business dealings and life-long earnings, Bob had an unlimited budget, but preferred to purchase a modest cottage on a small lake, rather than a monster mini-mansion on a busier body of water, like Muskoka, Rousseau or Joseph.

When Bob’s son, John, found the Stewart Lake bungalow, listed for $900,000, they decided to drive out and have a look. It ticked all of Bob’s boxes: the back deck was east-facing, so they could catch the sunrise; it had a beach-like strip of waterfront; and the pine interiors gave it a cottage-y vibe. Plus, it had a two-car garage, where Bob could store his BMW Z3 in the winter.

Within a few hours, Bob submitted an offer of $925,000 with no conditions. That sealed it. After the deal closed, when Chris finally got a chance to see the place, she thought it was lovely, too. She liked that Bob and John had picked a modest, low-maintenance property, with water services and winter street-plowing provided by the city. The family’s two dogs, Shilah and Tucker, jumped right into the lake during their first visit. 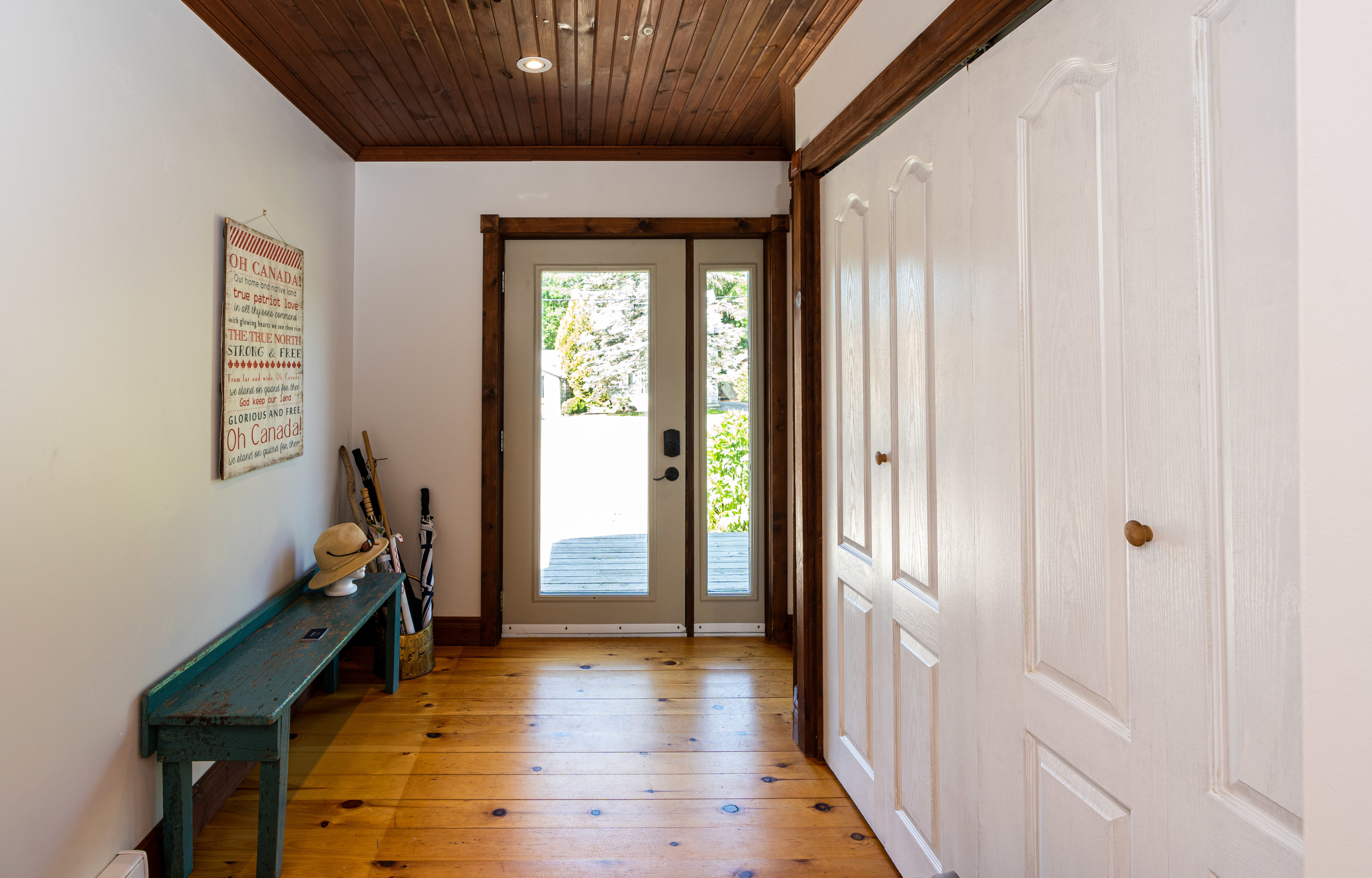 In the kitchen, there’s a stone backsplash and a farmhouse sink. 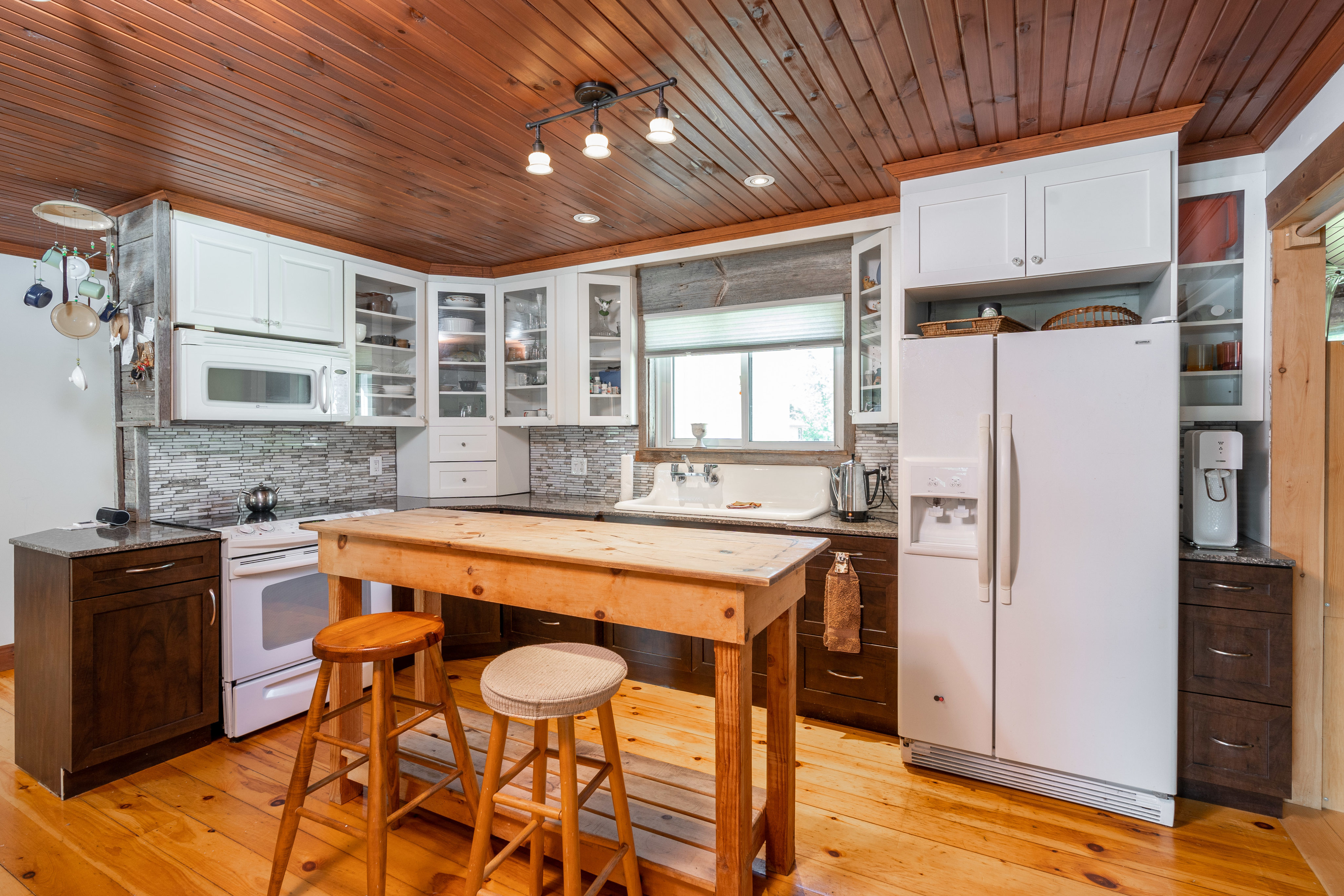 This fireplace dates back to the 1930s: 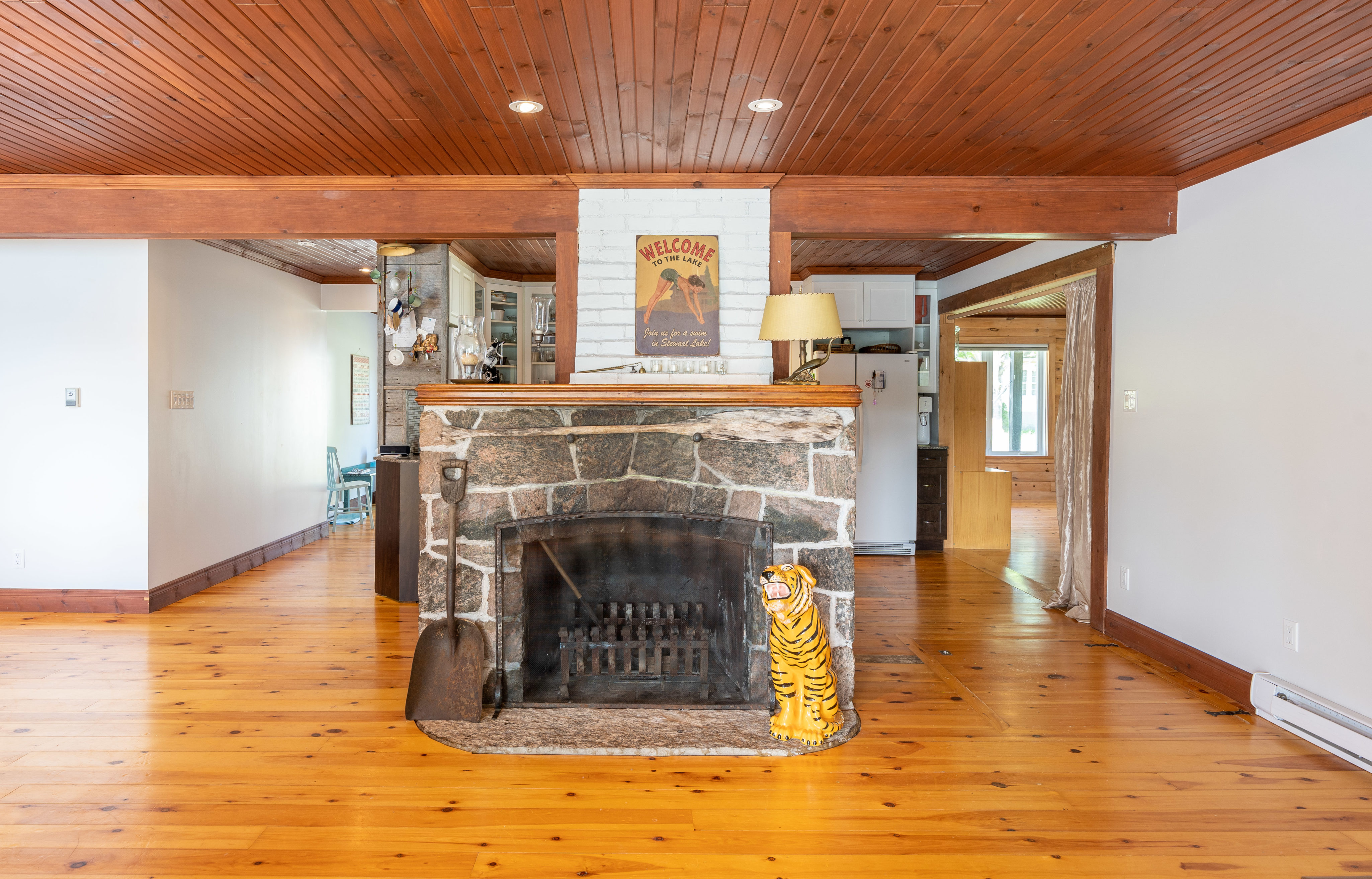 The enclosed back porch has a view of Lake Stewart: 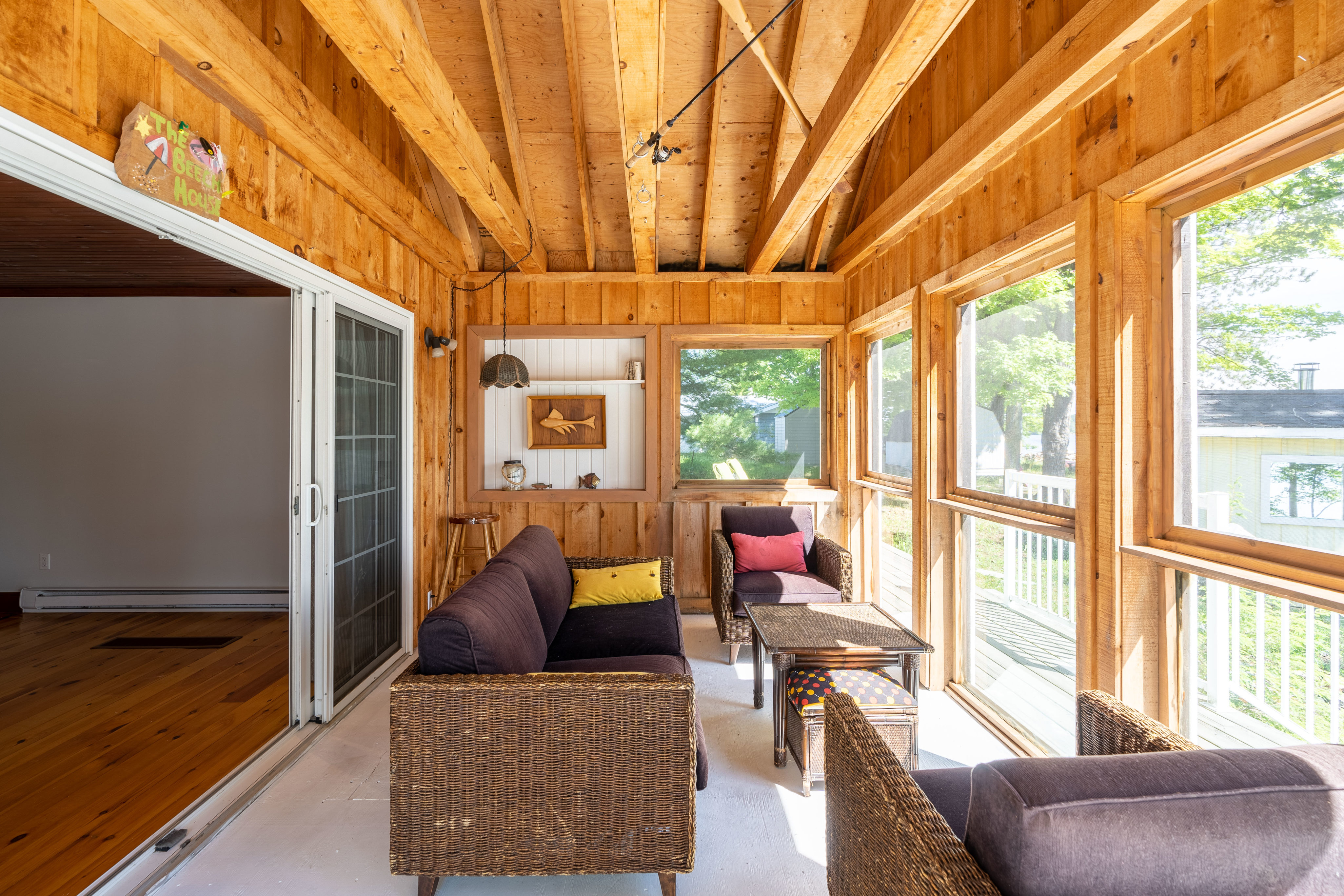 Here’s the dining area, which has pine floors and ceilings, like the rest of the cottage: 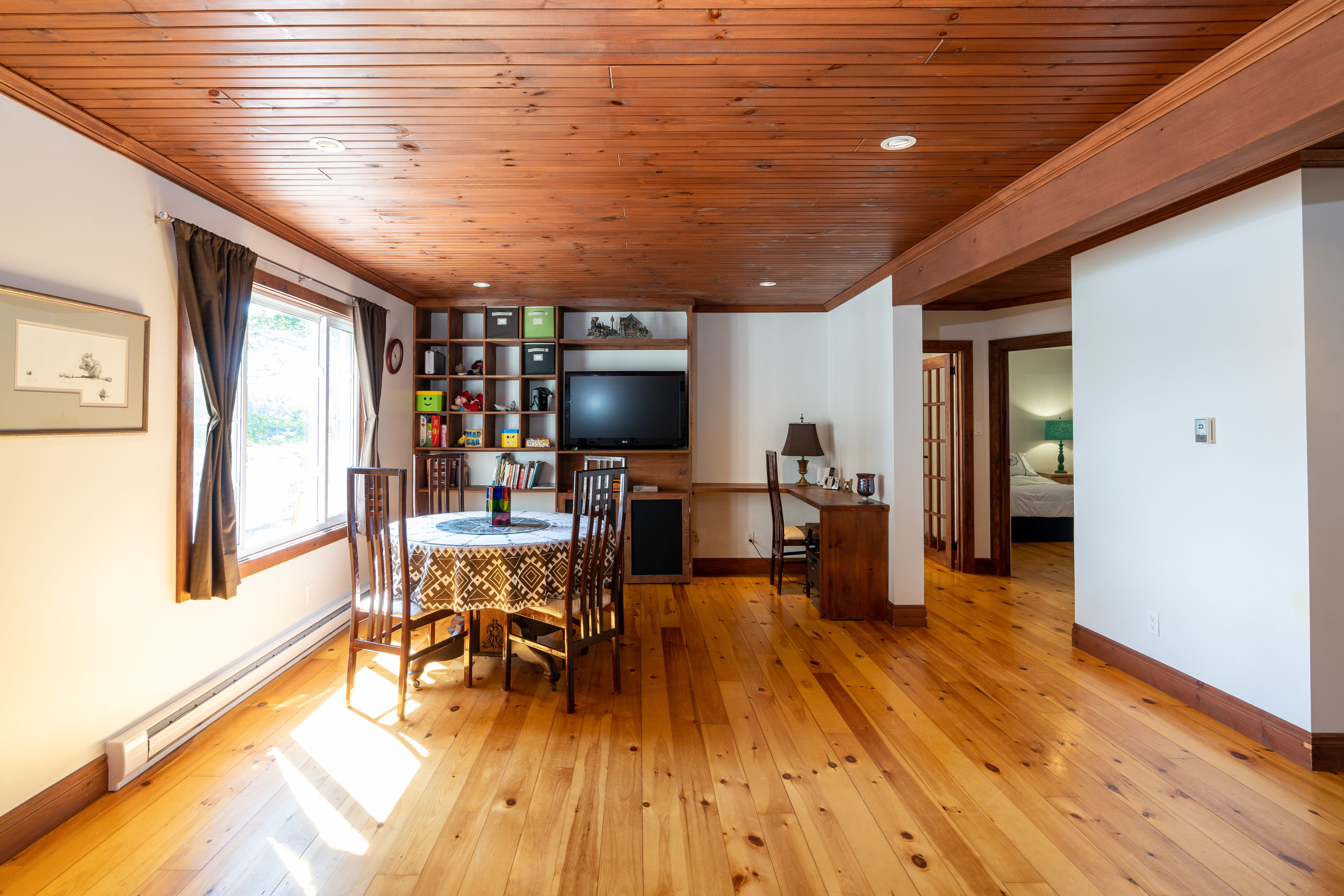 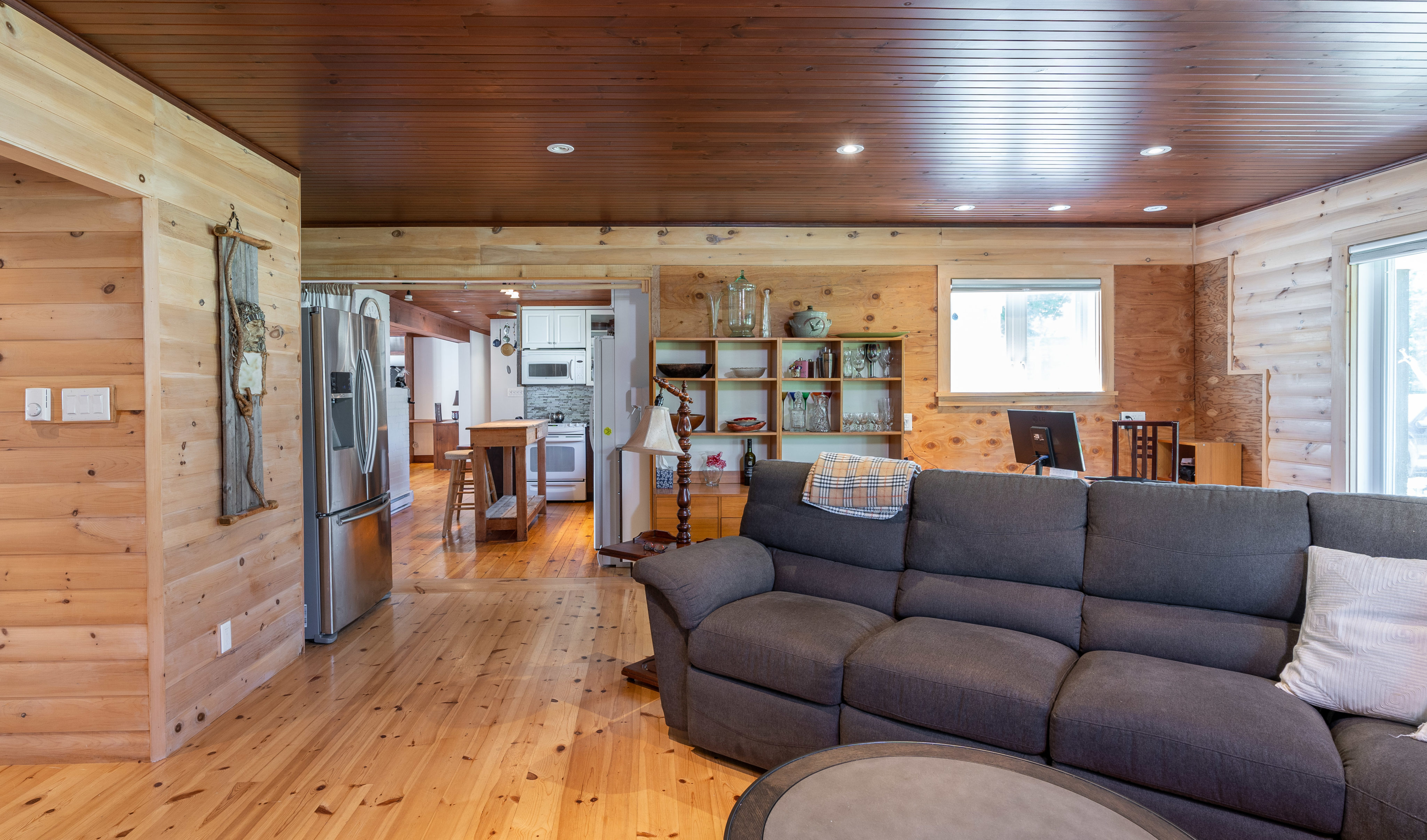 Here’s the first bedroom, which has a ceiling fan and a door to the back deck: 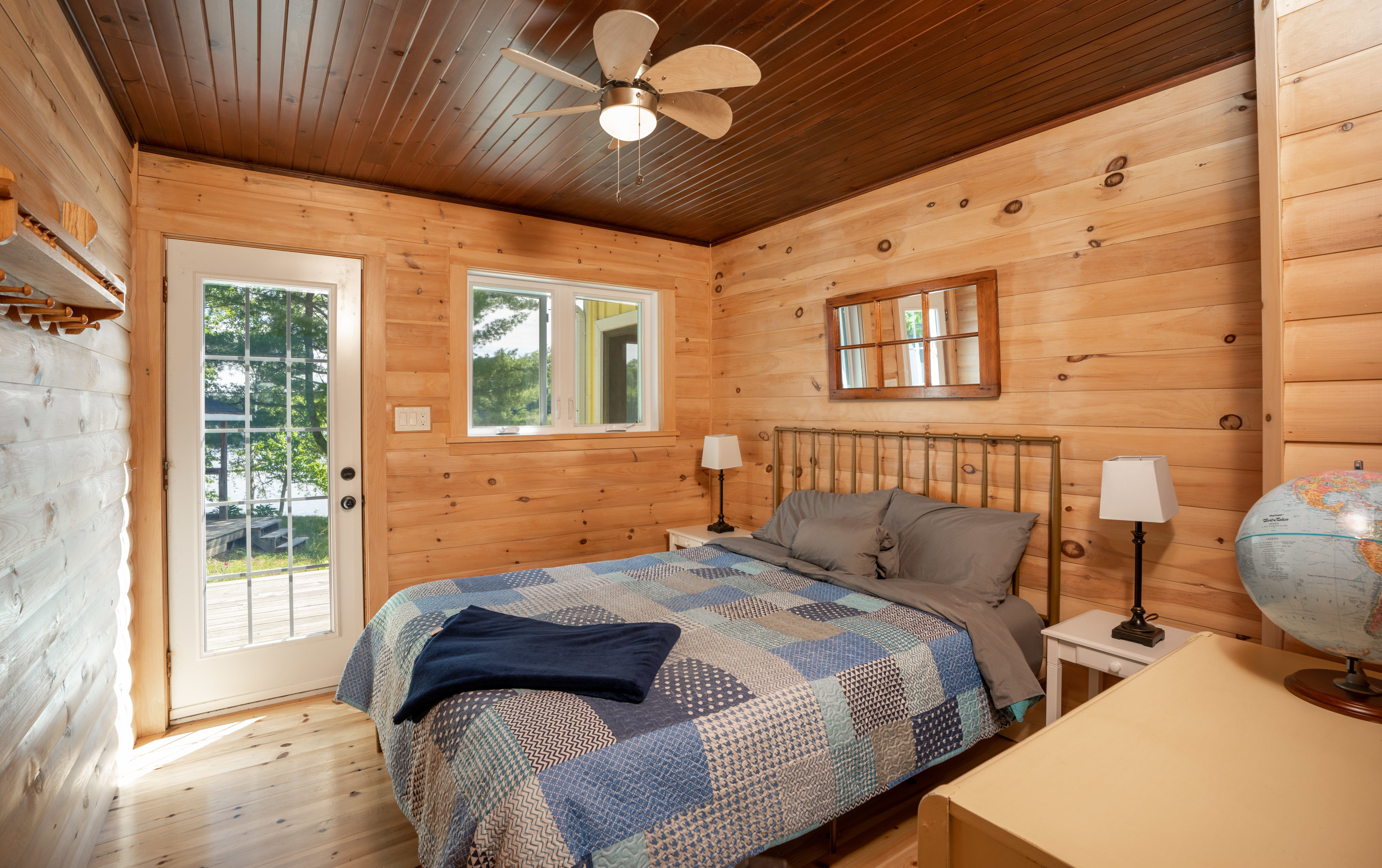 The second bedroom also has access to the back deck: 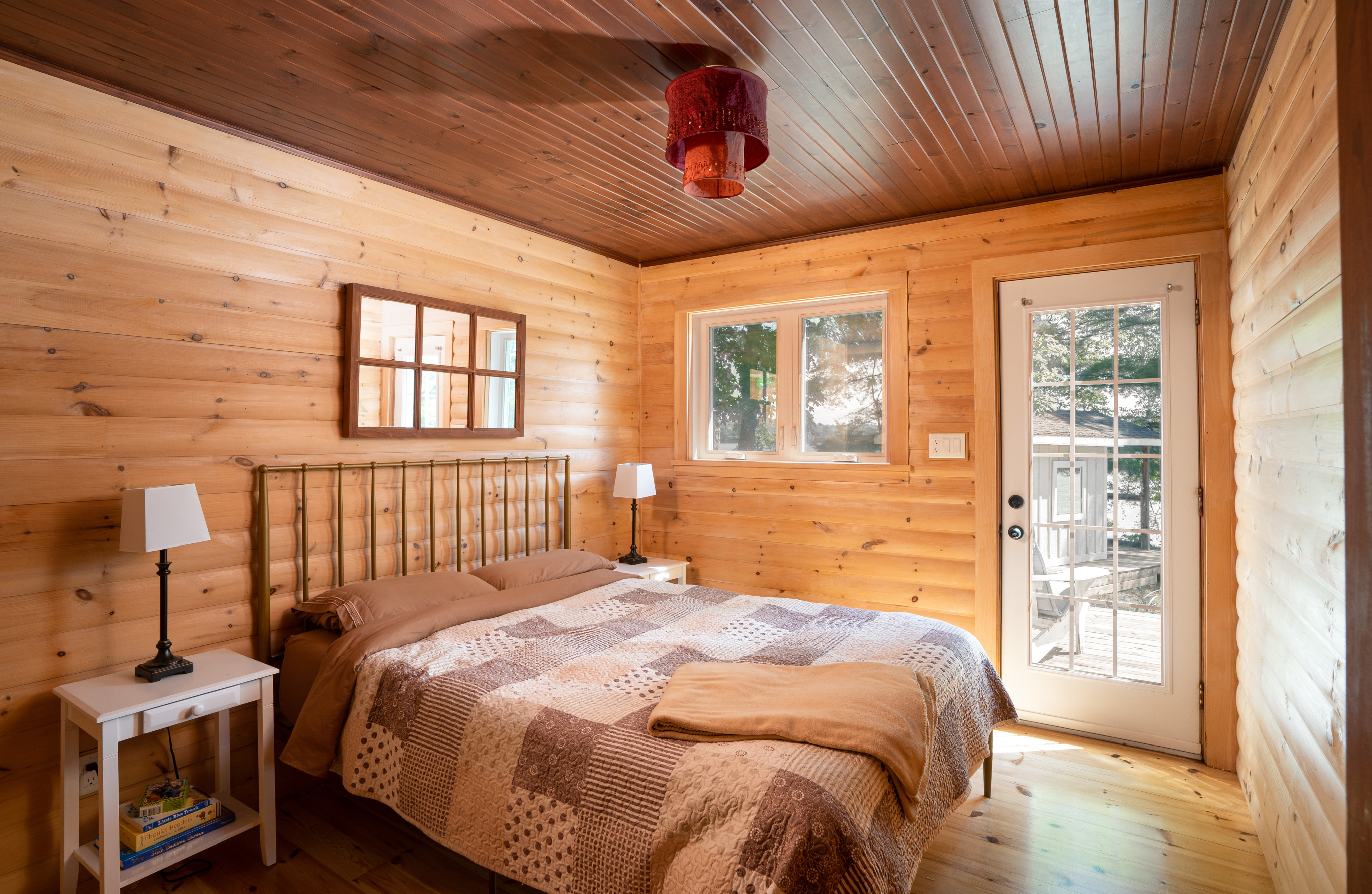 There’s a bathroom, with a shower and toilet, across the hall from those two rooms: 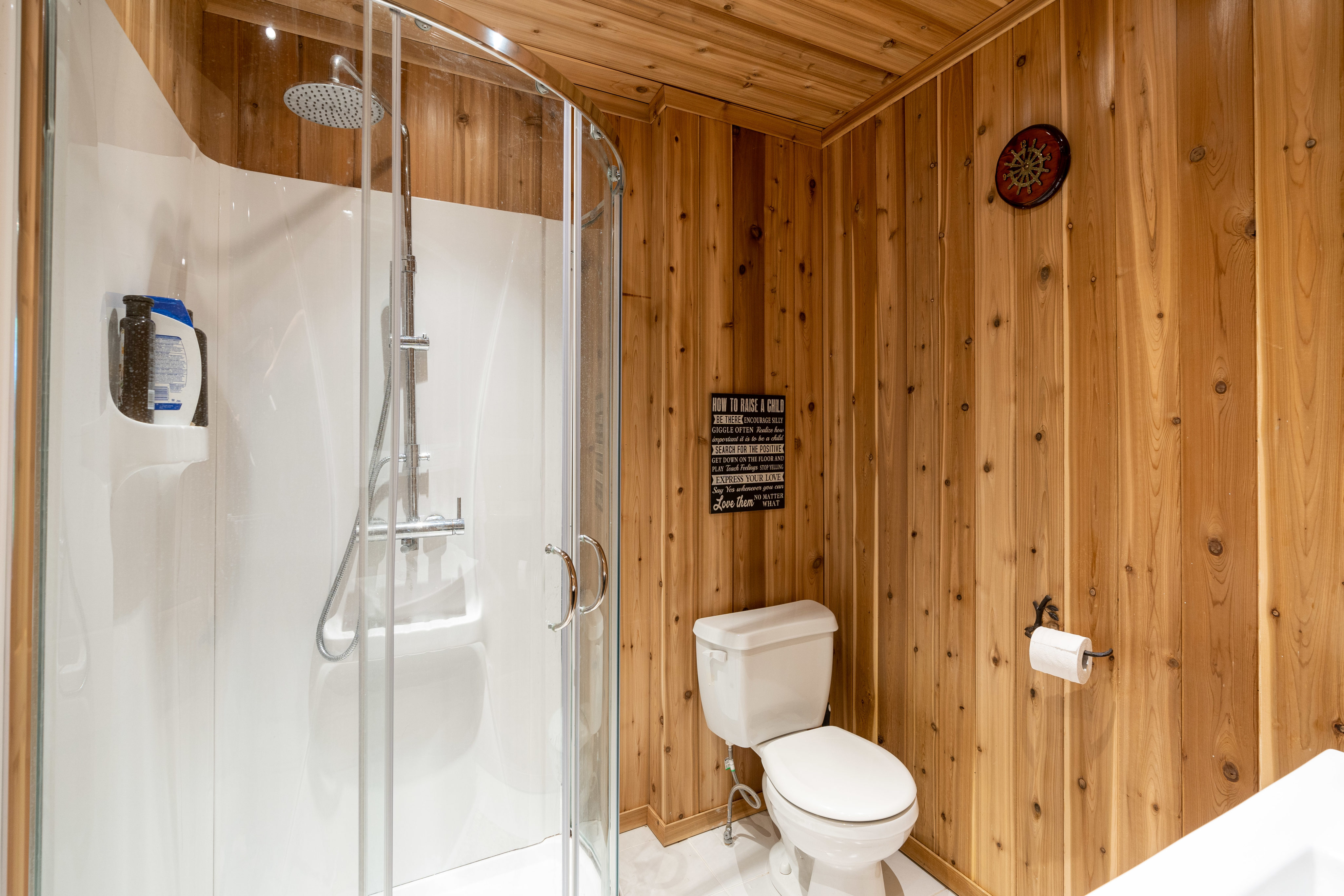 In a separate room, there’s a soaker tub. That window overlooks the north side of the property: 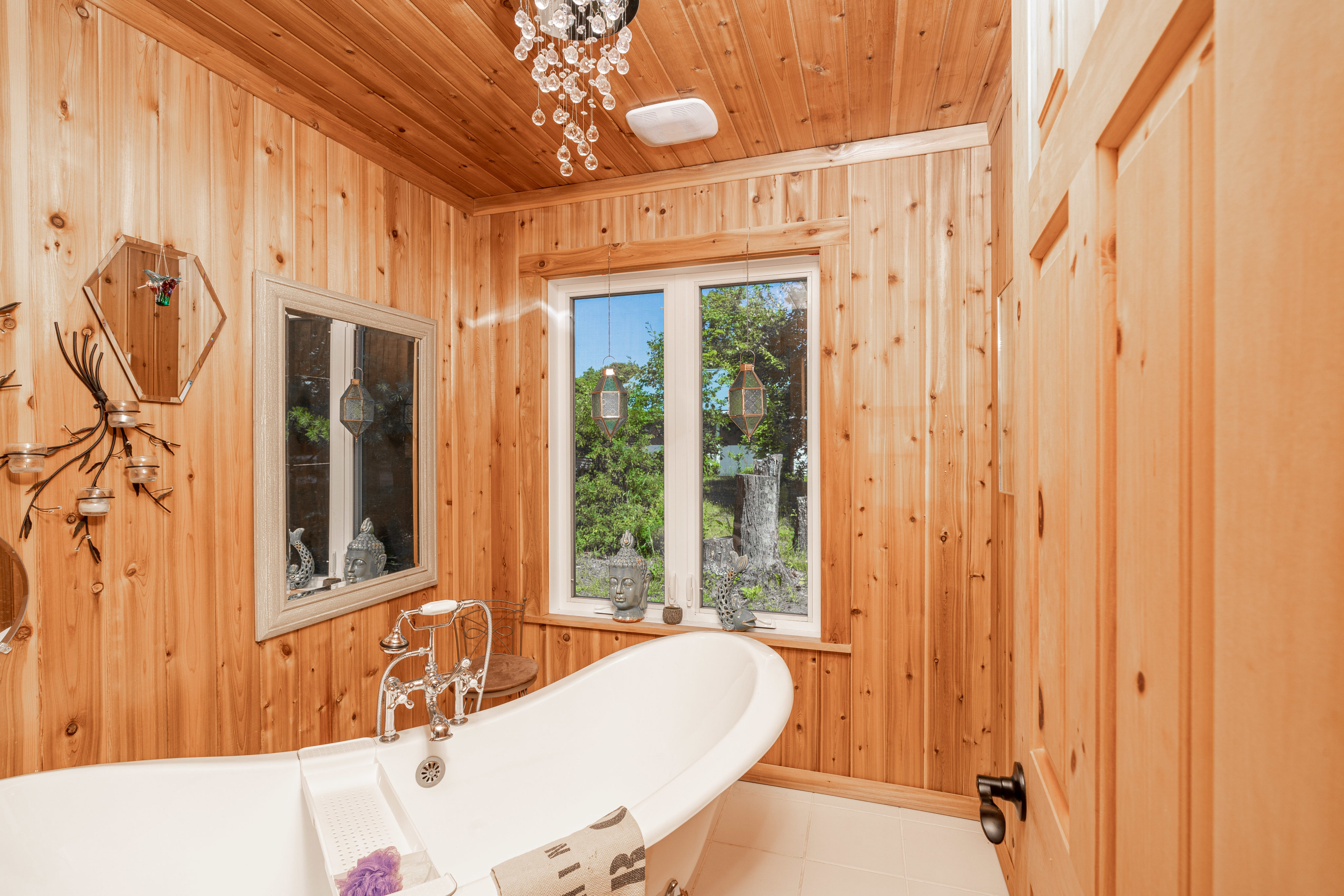 The 186-square-foot master bedroom has two sliding doors to the back deck, where the buyers can enjoy the view of Lake Stewart: 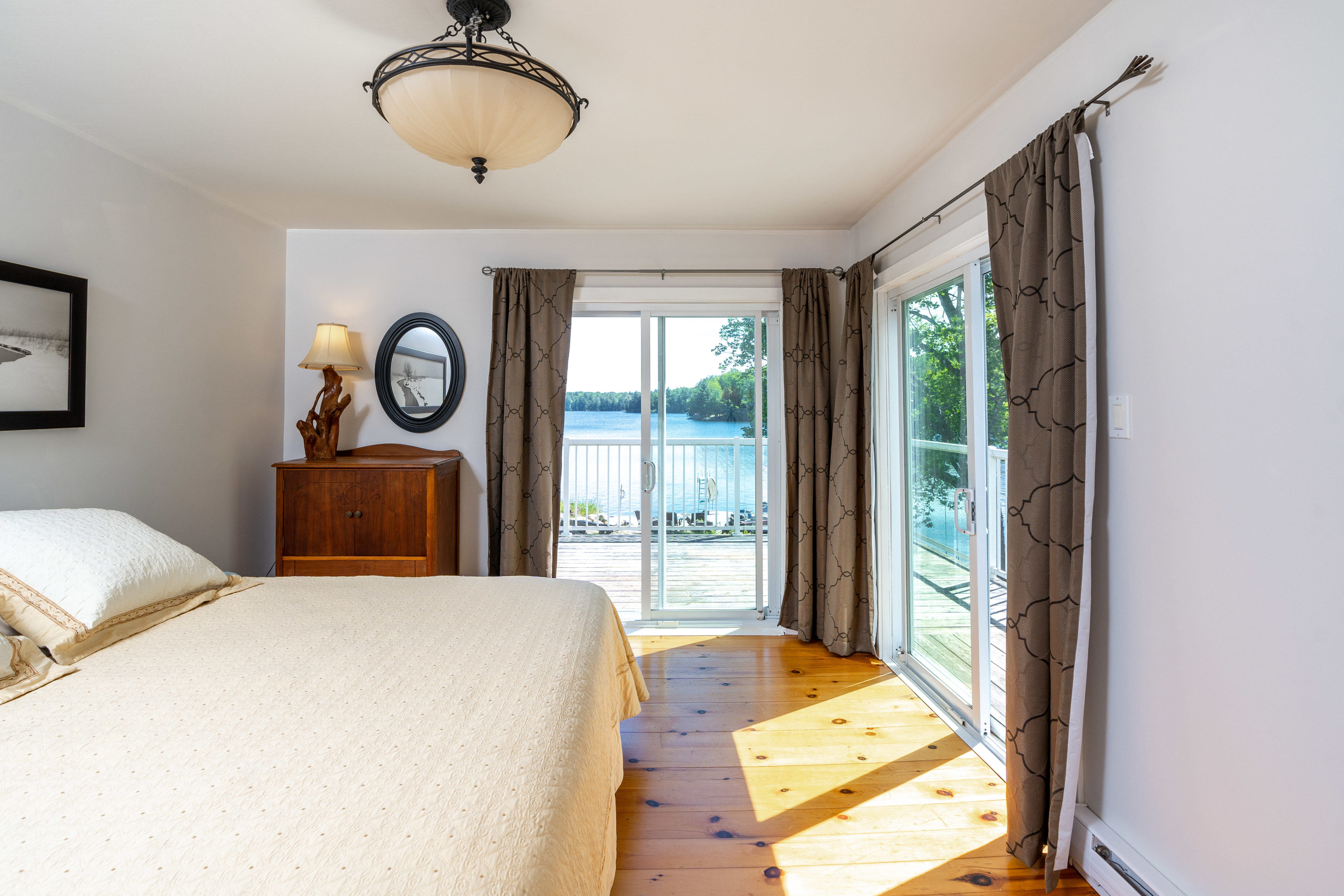 Here’s the second bathroom, which was painted yellow to match the cottage’s façade: 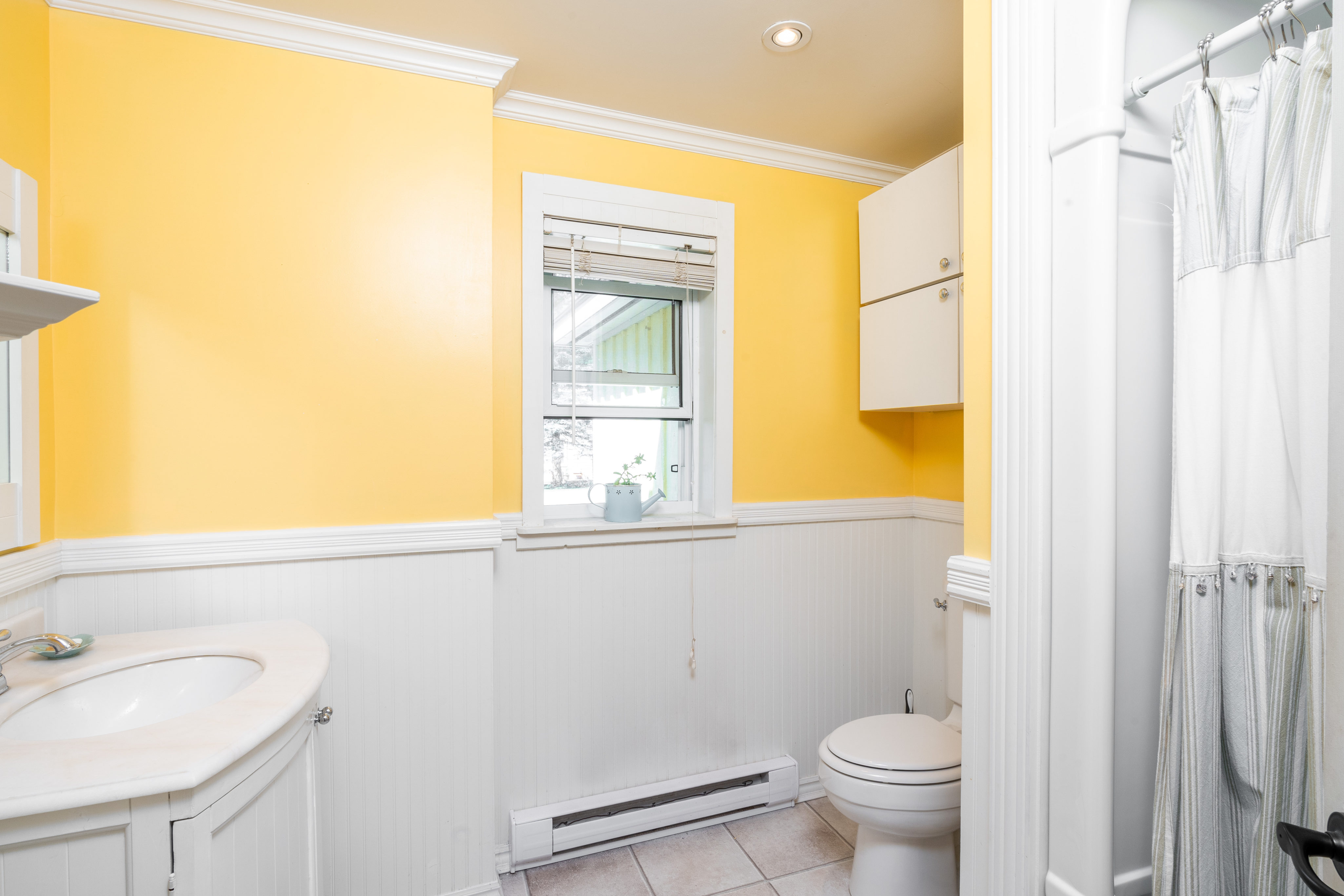 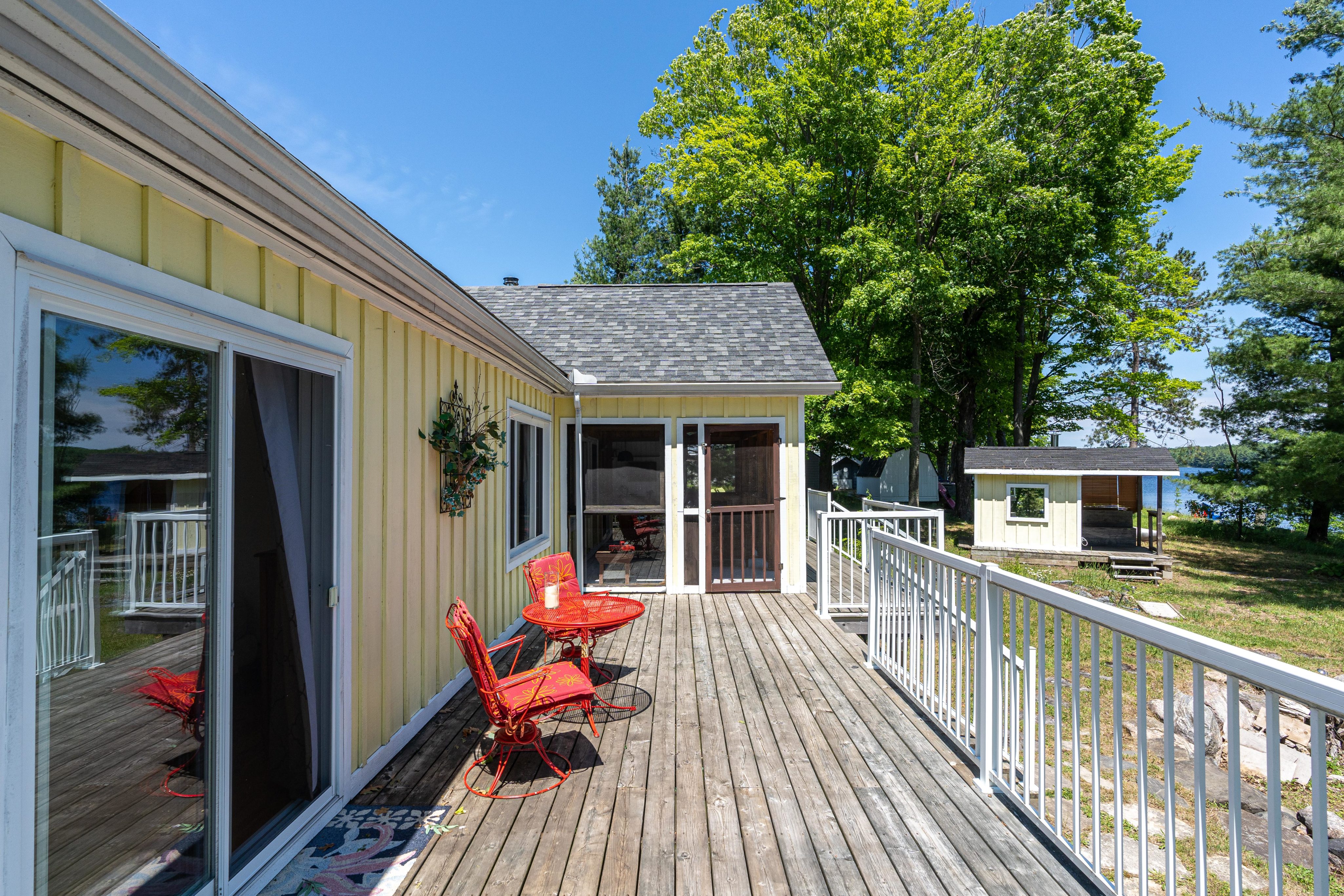 This shed is actually a six-person sauna: 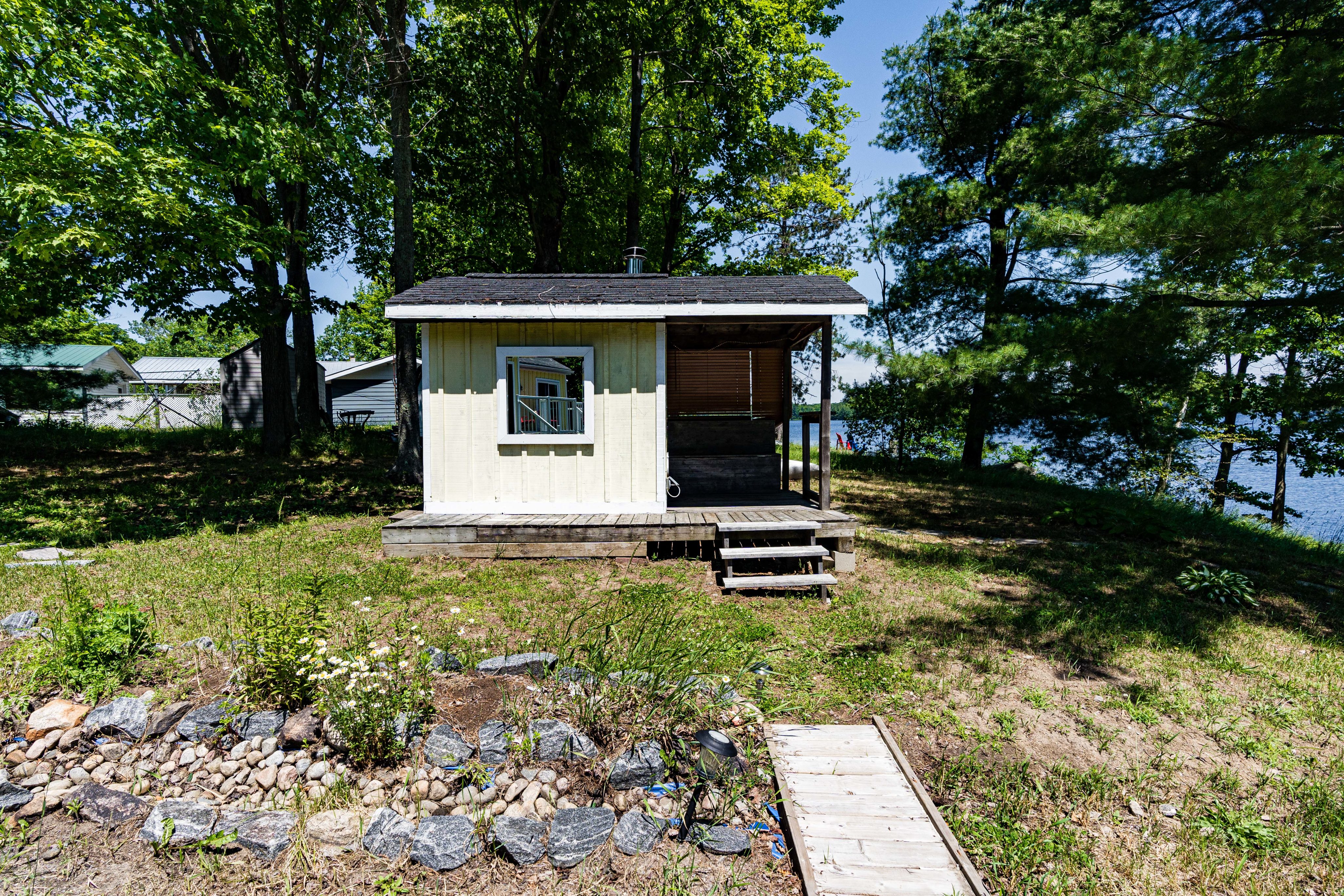 The rocks surrounding the fire pit were recovered from an excavation to level the property: 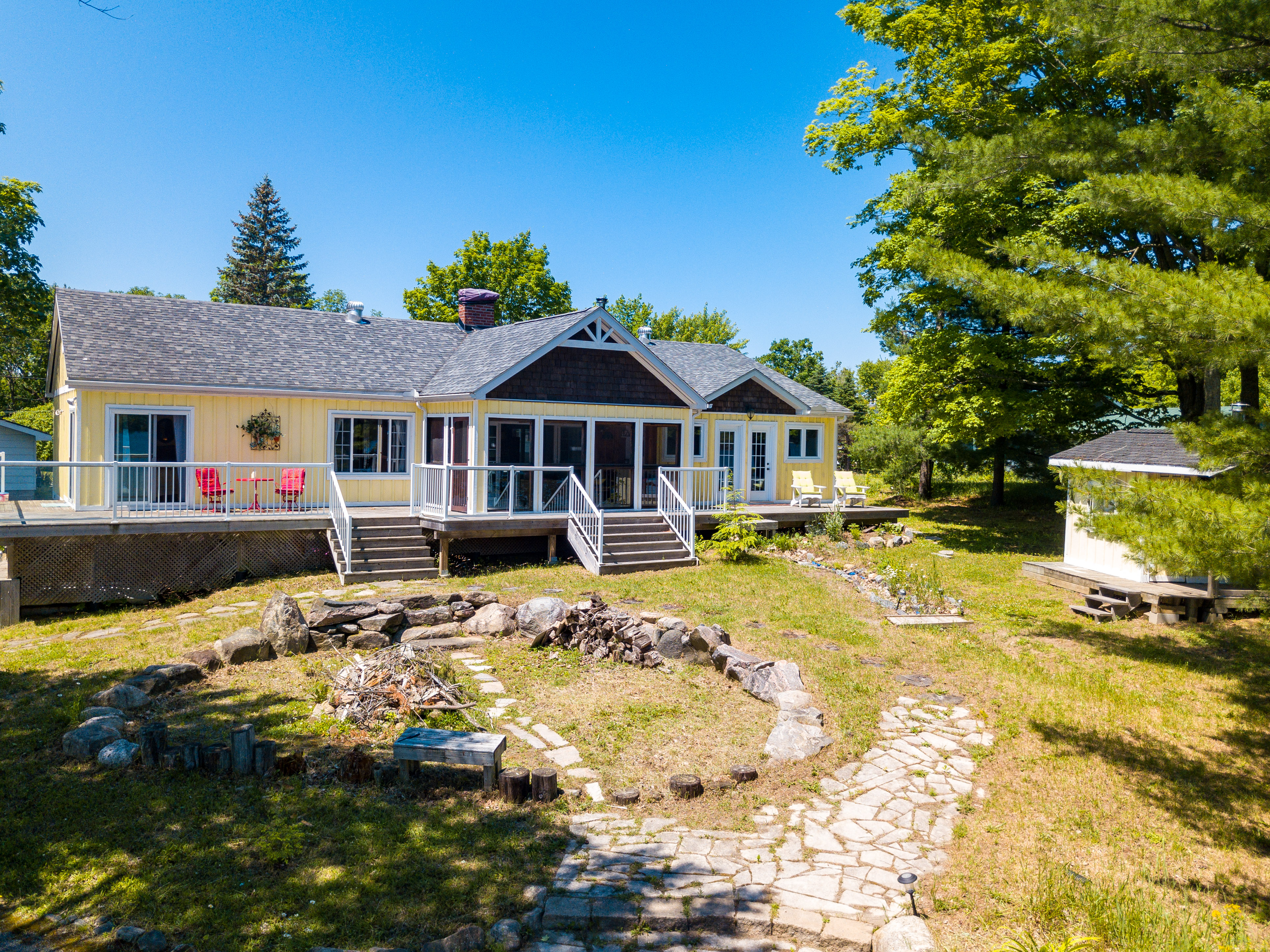 Here’s a view of the property from the water: 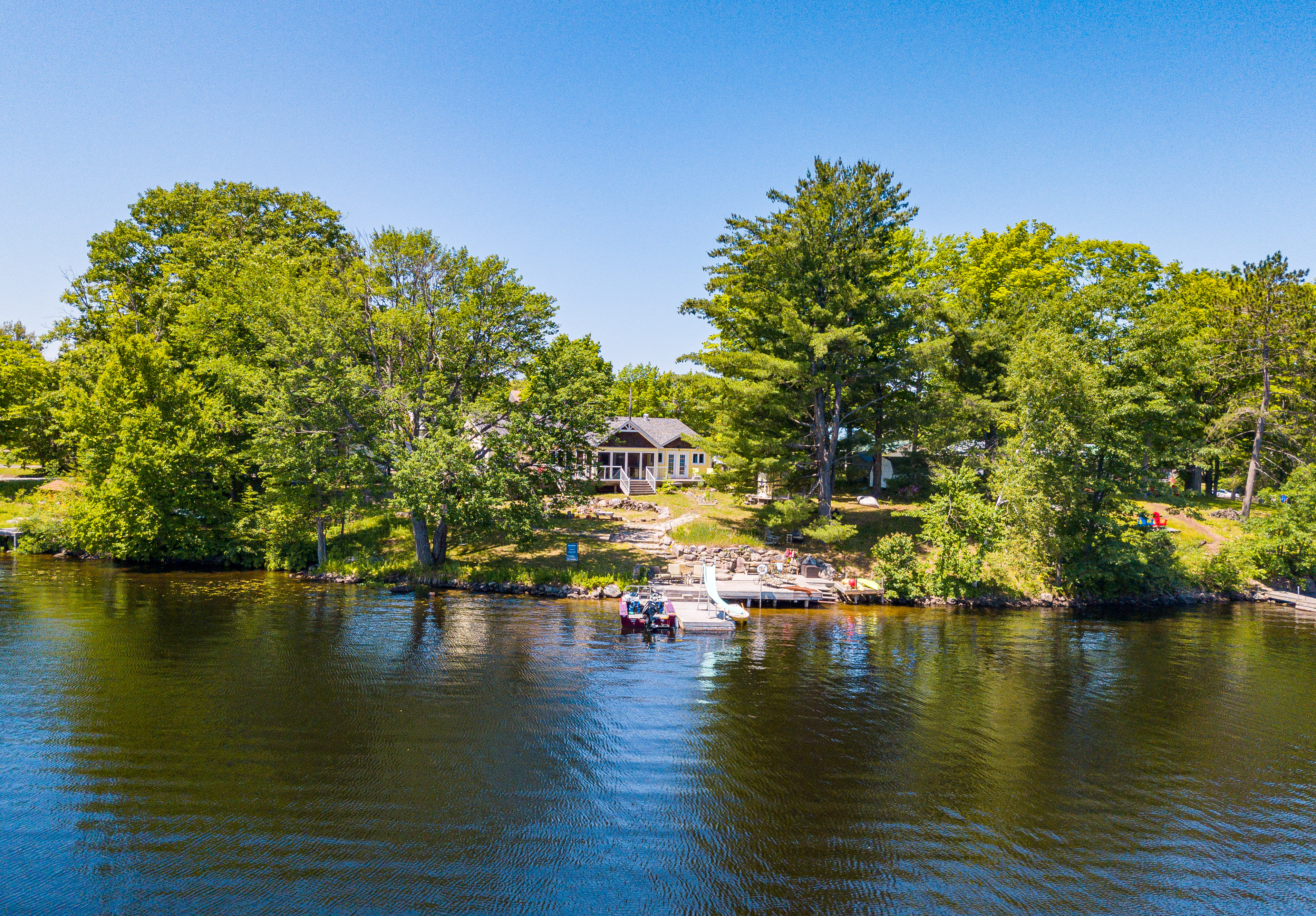