A Toronto couple wanted to ditch the city. So they sold their $1.5-million Danforth semi and bought a $660,000 farm in Williamsford

A Toronto couple wanted to ditch the city. So they sold their $1.5-million Danforth semi and bought a $660,000 farm in Williamsford

Who: Sarah Saso, 55, a social impact marketer; and Lonny Doherty, 53, an interior designer and landscape artist. 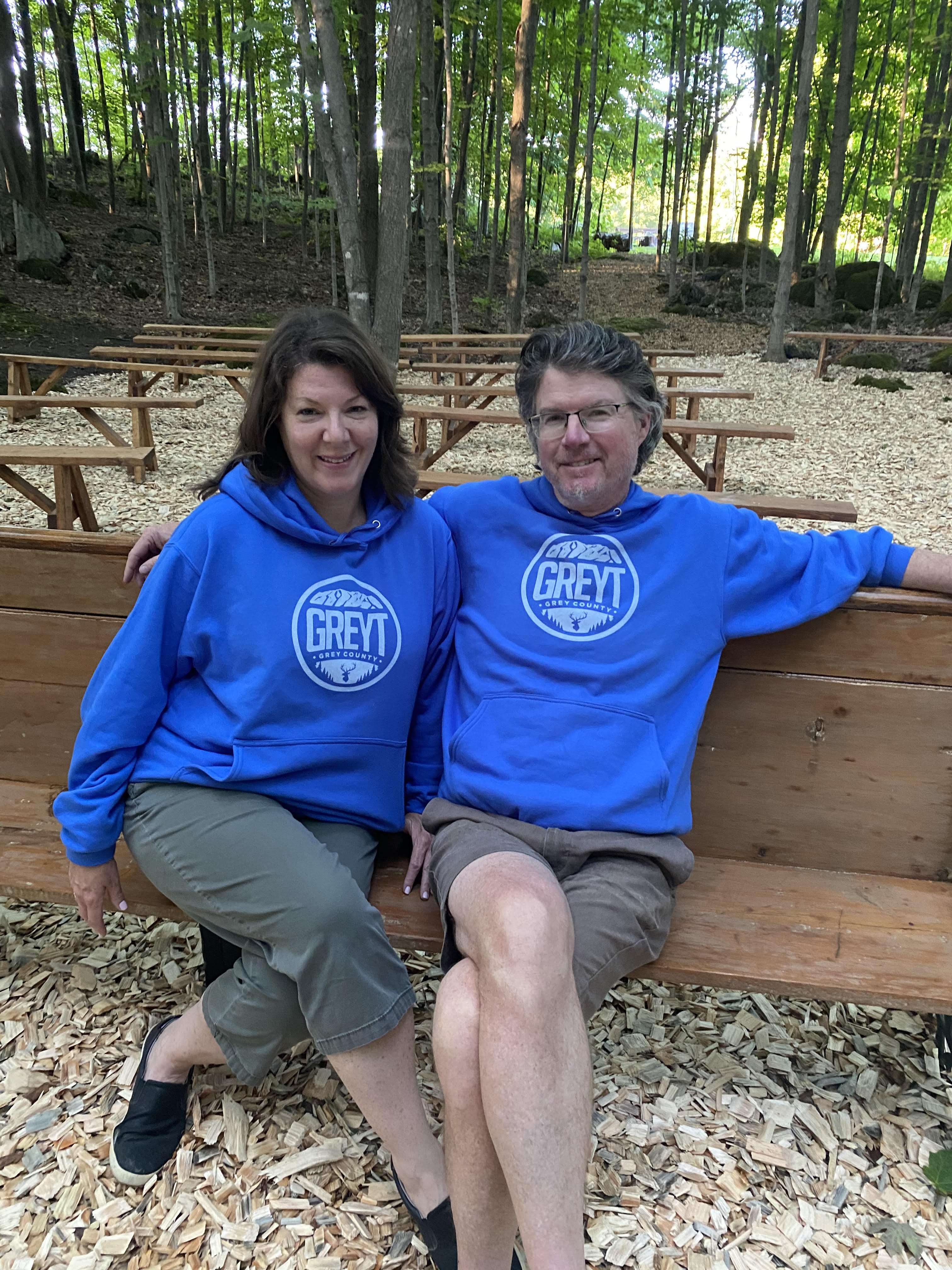 The history: In 2010, Lonny and Sarah bought a four-bedroom semi in the Danforth for $445,000. Lonny used one of the bedrooms as his studio, while Sarah commuted to her job in North York. The couple enjoyed being close to the shops and restaurants on the Danforth. Lonny could also quickly hop on the subway to catch a Blue Jays game downtown.

During summers, Lonny and Sarah often rented cottages on Lake Huron or in Muskoka. Sarah loved the convenience and energy of urban life, but she realized she was happiest during those relaxing summer trips, spending time near beautiful forests and serene lakes, far away from the congestion of Toronto. As for Lonny, he wanted to be closer to the countryside he often depicted in his landscape paintings.

In early 2018, Sarah left her North York job. Since she planned on working remotely at her next job and Lonny could work from anywhere, the couple decided to start searching for a rural home.

They set an $800,000 budget for a property within a three-hour drive from Toronto—Lonny and Sarah wanted to remain close enough to visit friends and family in the city. Their must-haves also included at least an acre of forested property, water access and a studio space for Lonny.

The search: In the spring of 2018, the couple toured a farm in the town of Goderich in Huron County, located two and half hours’ drive west of Toronto. Decades earlier, Lonny’s father had grown up on that farm. Lonny loved the idea of purchasing it and returning to his roots.

But the Goderich farm was on a floodplain, and Lonny and Sarah were wary of the added costs of protecting the property from water damage. They opted to not make an offer, but they were now inspired to find a farm somewhere else—ideally, with a barn Lonny could use as his studio and workshop.

On weekends, the couple drove up to Bruce, Grey and Simcoe County, touring farms near towns like Southampton, Owen Sound and Collingwood. By the summer of 2019, they’d viewed more than 20 farms, but none of them had the right combination of affordability, scenic property and proximity to amenities.

Despite their lack of success, Lonny and Sarah listed their Danforth home. The market was hot at the time and they figured they could maximize their profits if they sold that fall.

The couple had made extensive renovations over the years, totalling about $250,000, including soundproofing the shared wall of their semi, installing heated floors in the basement and updating the HVAC and electrical throughout. If they still hadn’t purchased a property before selling their Danforth home, they figured they could rent until they found a farm.

The following month, the couple visited a 50-acre farm in Williamsford, a village in Grey County, located just over two hours’s drive northwest of Toronto and a 25-minute drive south of Owen Sound. 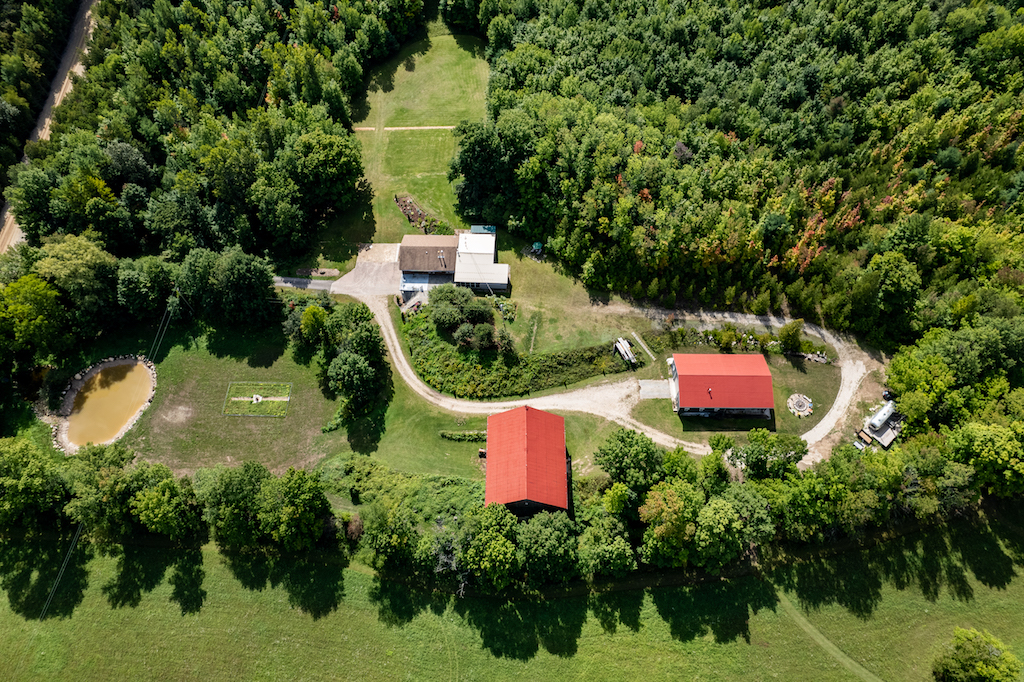 The property had everything they were looking for: a 3,000-square-foot barn to serve as Lonny’s studio and workshop, plus water access to a nearby river and several lakes. 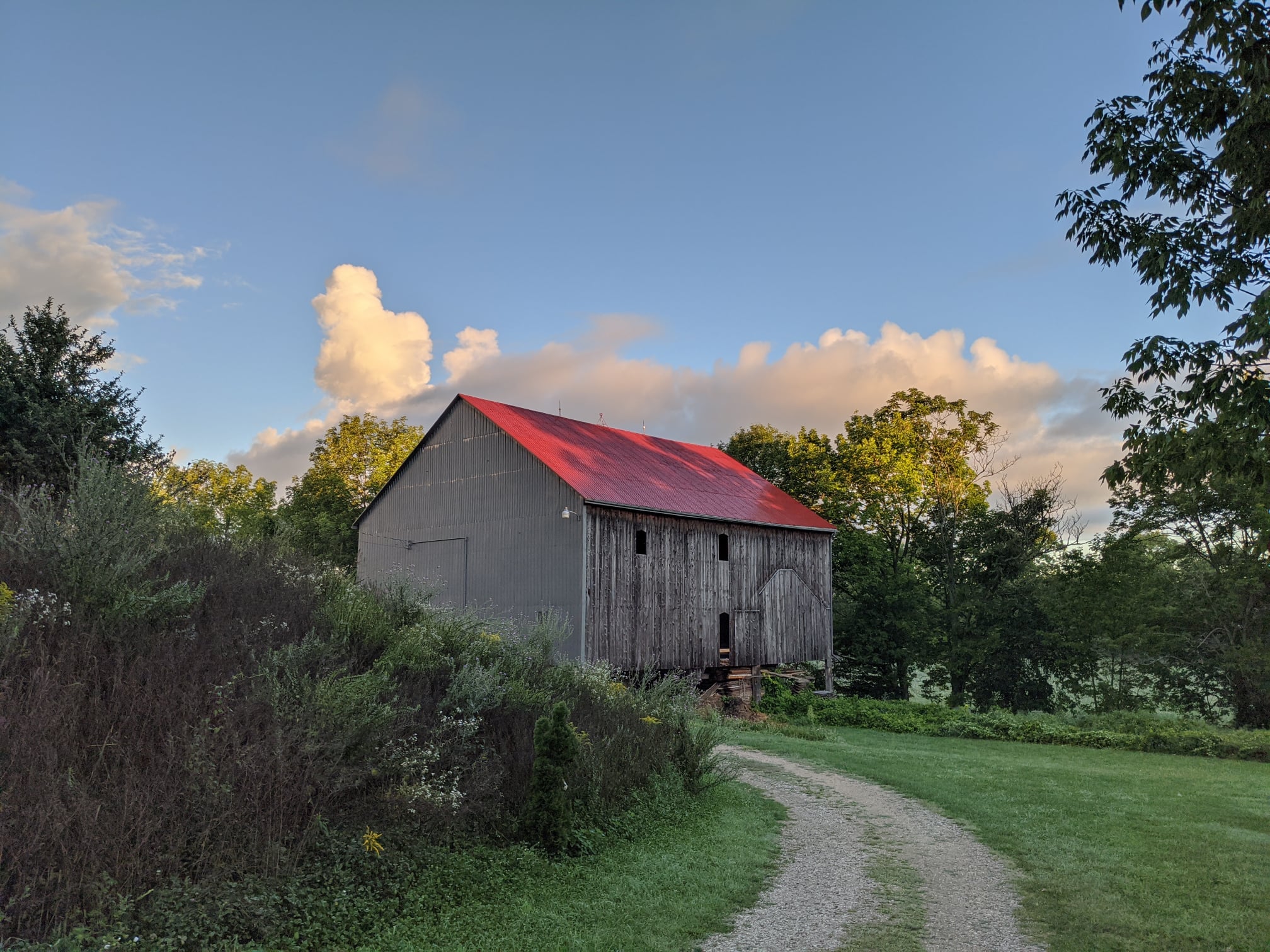 Lonny was particularly enamoured with the 20 acres of forest on the property, which included a variety of maple, ash and birch trees for him to paint. As for amenities, grocery stores and shops in Durham and Owen Sound were less than a 30-minute drive away.

Next to the barn, there was a four-bed, two-bath raised bungalow with 3,776 square feet of living space. The only real downside of the beautiful property was the ugly façade of the house: the red and brown bricks looked drab, and the windows were misaligned. 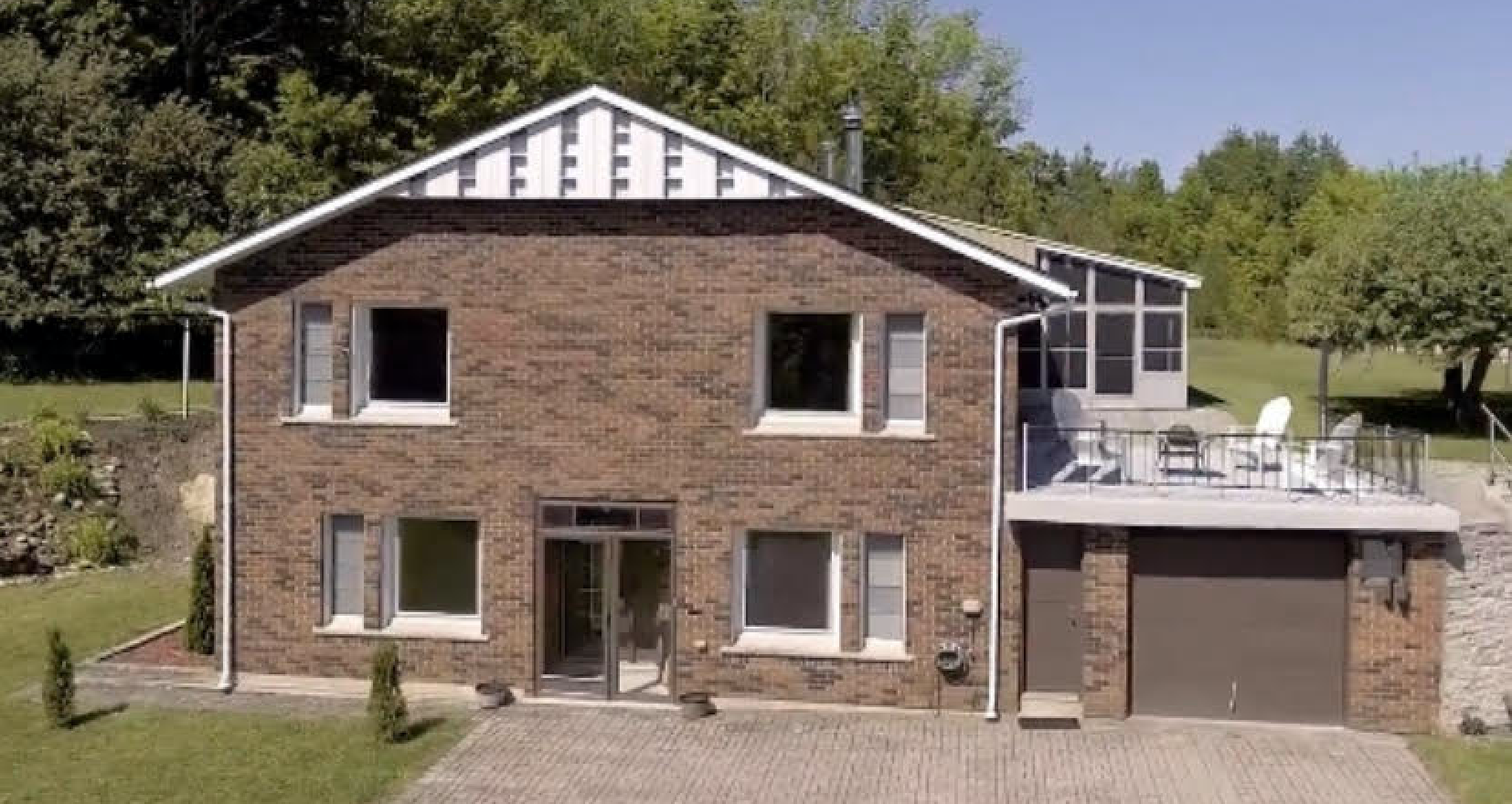 Fortunately, the home had no major structural issues. Inside, there were spacious bedrooms, plus a large kitchen and living area on the main level.

Down in the basement, Sarah envisioned using the small office as her WFH space. Lonny and Sarah figured they could easily address any aesthetic fixes, like the misfitted front windows and the hideous pink and grey checkerboard floors in the basement office.

During the tour, the seller informed the couple that he had just accepted a $660,000 conditional offer for the property, which was listed for $667,000.

The outcome: In November 2019, Lonny and Sarah moved to their Williamsford farm. They dubbed the property Devonwood, a play on a running joke amongst their Toronto friends that Sarah, a certified city slicker, would move to a farm when pigs fly (Devon is the name of a breed of black pig). 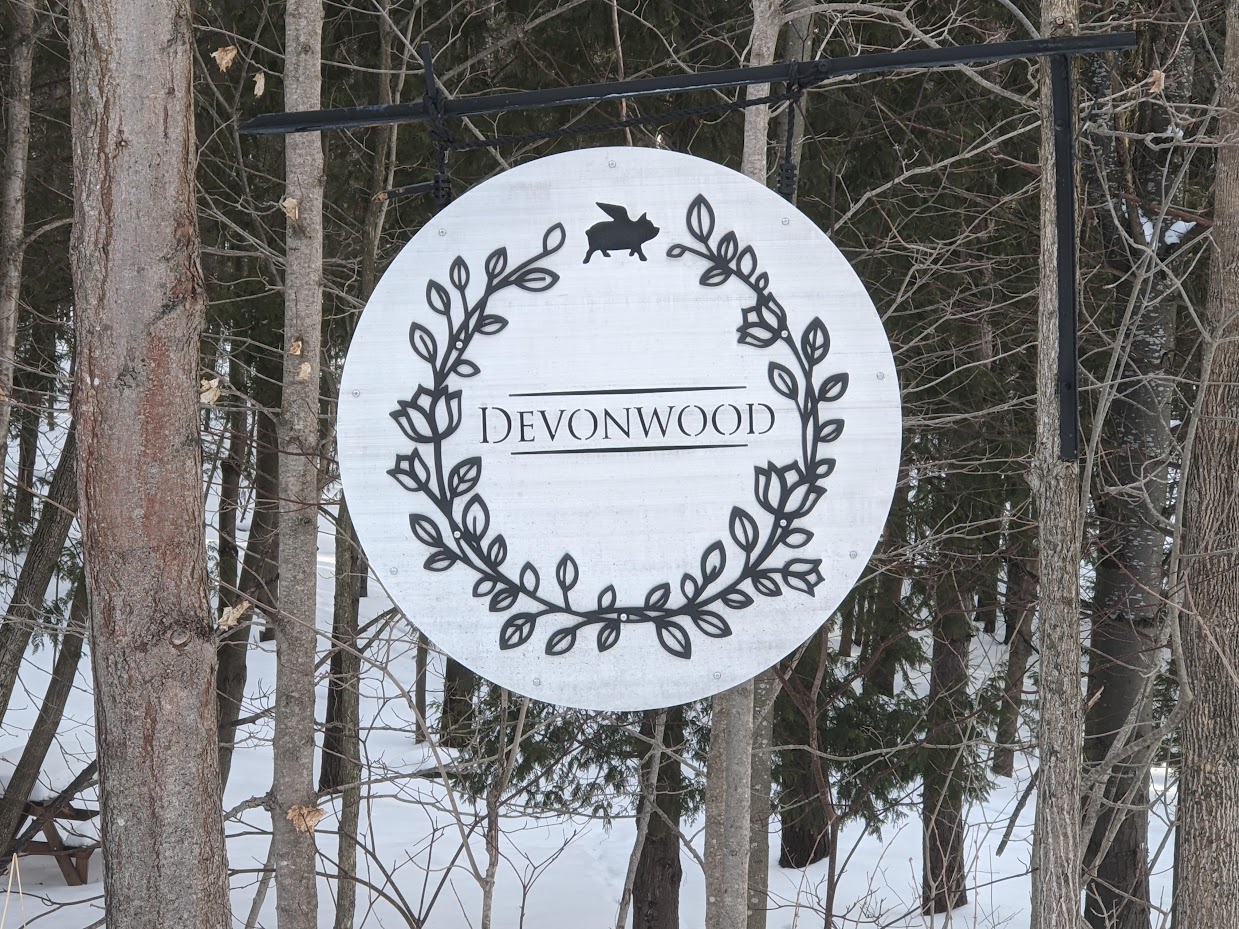 Then they got to work, renovating the house and barn.

Lonny and Sarah quickly befriended their neighbours, something they always found difficult to do in Toronto. Sarah began hosting yoga nights in their front lawn every Wednesday. The couple also invited friends over for movie screenings in the barn, where they set up a screen and projector.

After the pandemic hit in March 2020, the couple appreciated having the freedom to explore the trails on their property while they were in lockdown. 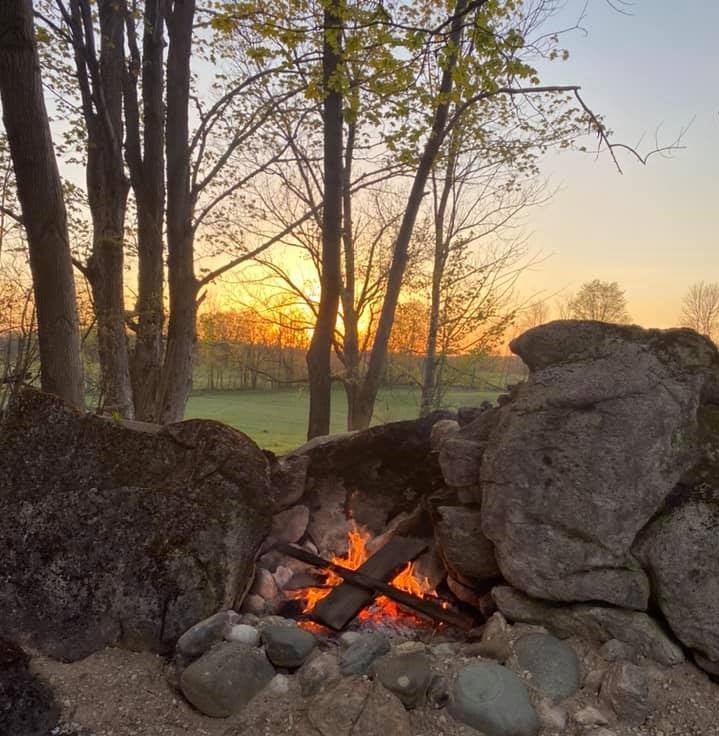 Whenever Covid protocols were eased, the farm became a social-distancing refuge for friends and family in Toronto.

In August 2021, the couple hosted the wedding of Lonny’s niece, Justine. Sarah, an ordained minister, presided over the ceremony, which was held outdoors in their forest with 120 guests in attendance.

This winter, while Sarah works from home, Lonny is crafting furniture using ash trees sourced from their property, as well as transforming a 1971 Airstream trailer into a luxury rental. 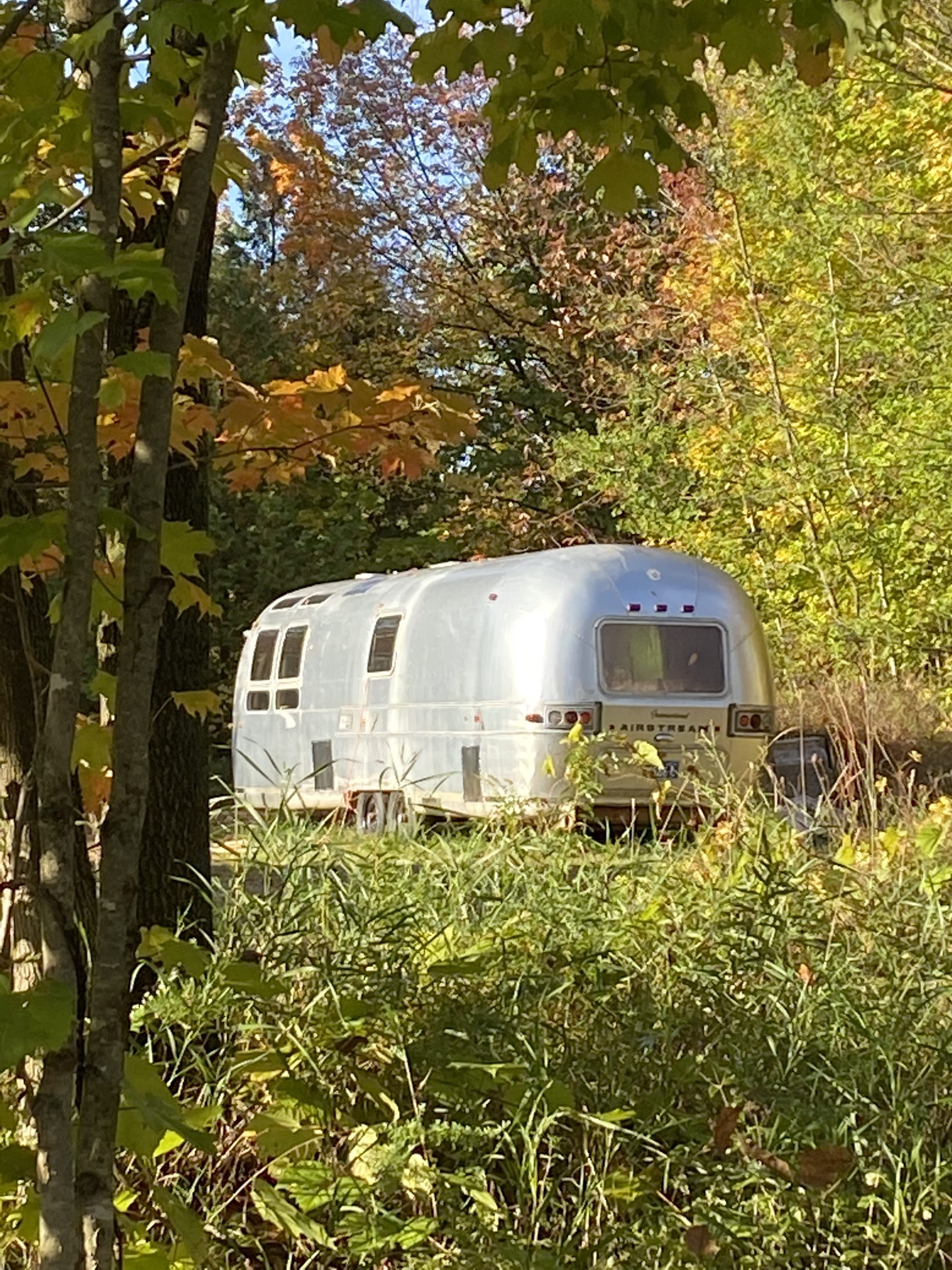 Lonny and Sarah will tackle the ugly façade at some point in the future, by replacing or repainting the brick and properly aligning the windows.

Two years after moving to the country, Lonny and Sarah can’t imagine ever going back to Toronto. They plan on spending the rest of their lives at Devonwood and, Covid permitting, they’re looking forward to having friends and guests over to enjoy their farm this spring.