“The very first day, a bee dive-bombed my eye”: Memoirs of an urban beekeeper

“The very first day, a bee dive-bombed my eye”: Memoirs of an urban beekeeper

Laura Mazzuca graduated from Ryerson in April of 2020, a month after the city went into lockdown. With job prospects limited by the pandemic, Laura and her partner, Stefan, started looking into activities that would keep them busy—and get them out of their apartment. Here, a self-described “city girl” tells us how she discovered an unlikely new hobby.

—As told to Isabel Slone

“When Covid hit, I was living in High Park with my partner, Stefan, doing social media consulting and content creation. One day in May of 2020, he turned to me and asked, ‘Hey, do you want to start beekeeping?’ Stuck in our apartment, we were trying to come up with activities to keep us busy. Stefan had been googling outdoor hobbies, and beekeeping popped up. Neither of us knew anything about it, but when I was a teen, my mom taught me to wash my face with honey to treat the occasional breakout, and it worked surprisingly well. I was intrigued; it sounded like fun.

“We took an online introductory course through the Ontario Beekeepers’ Association, which taught us how to set up a hive, handle bees and manage mite infestations. The course was self guided, so we put in a few hours every day after work and completed it in about a week.

“Next, we bought all of the equipment we needed to get started—two beekeeping suits, a hive box, frames, a super (which collects honey), a queen excluder, a hive tool, a smoker, a honey extractor, a frame grip and a winter wrap. All told, that cost us about $1,100. Then there are the bees themselves—a nucleus of bees (a small hive that’s split off from a larger colony) costs between $300 and $500, depending on how many frames are taken from the original hive. On average, there are between 10,000 and 15,000 bees in a nucleus, and three to five frames (the trays that hold the honeycomb) in a hive. There was no space near our apartment to set up our hive, but a relative of Stefan’s, who owns a farm north of Orangeville, agreed to let us use their property.

“To clock some hands-on experience before getting started, we also took a five-hour ‘Basics of Beekeeping’ class at Dancing Bee Equipment, where we learned about honey bee biology, how to use the equipment and what to expect from the bees in each season. We found a beekeeper located a 15-minute drive from the farm who agreed to sell us a nucleus, and in early June, we drove out to pick it up. Stefan and I were giddy in the car on the ride over—it was like everything we had been preparing for was leading us to this moment. 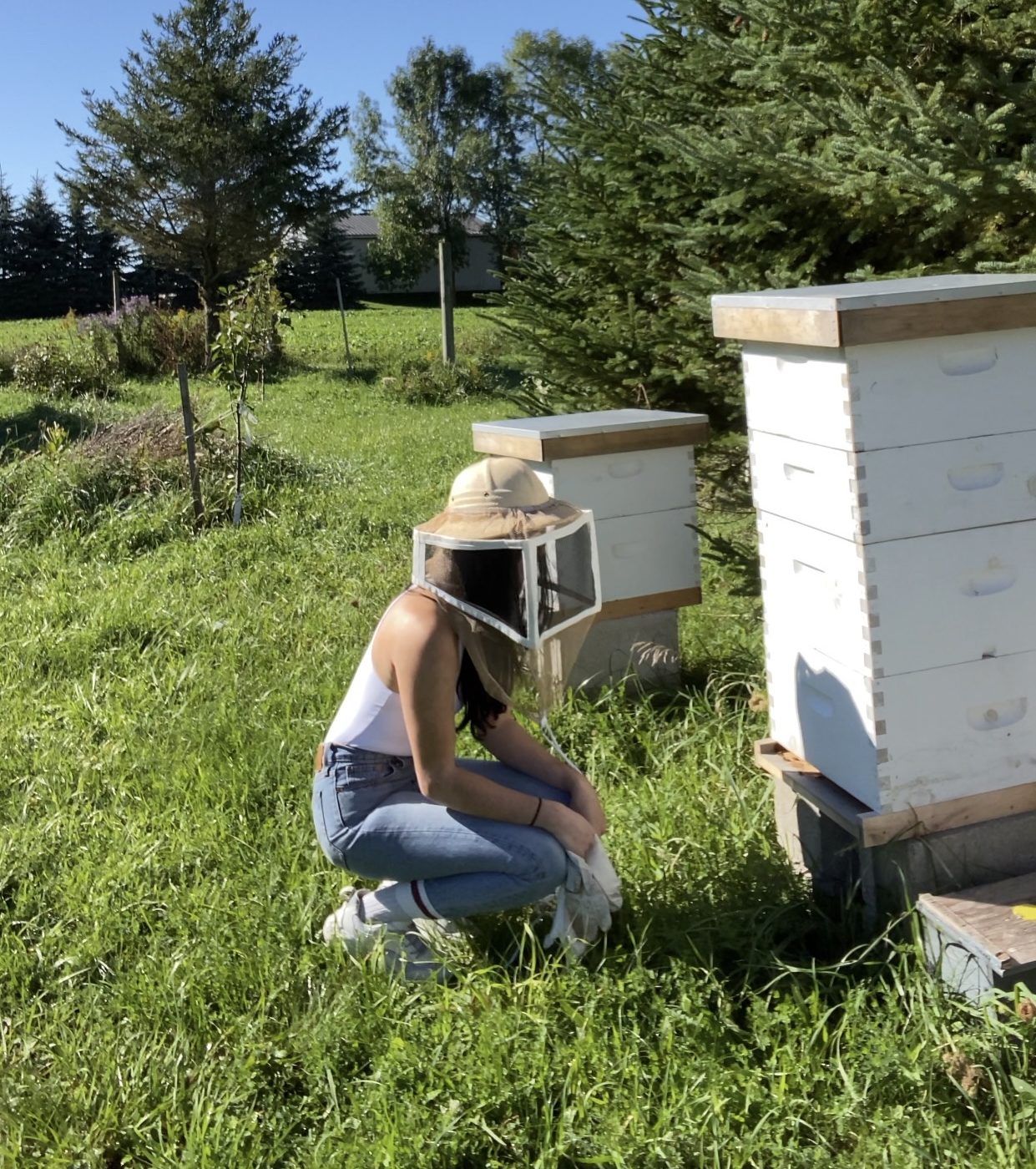 “We arrived mid-morning and were standing outside with the bee farmer when a bee dive-bombed my eye. I’m not afraid of bees, so I didn’t flinch—but then I felt it: a searing pain on the inner corner of my left eyelid. I had been stung by a bee on my foot before, but this was a very different experience. ​​That first sharp stab quickly developed into throbbing pangs. The bee farmer expertly pulled the stinger out of my eye and offered to give me some ice, but I refused—stupidly—so as not to give him the impression that we weren’t cut out for beekeeping. He said I could hold onto the box of bees on our drive to the farm, but after getting stung on the eyelid, I couldn’t muster the courage for that. Instead, we loaded the box onto the bed of our truck, with concrete blocks surrounding it so it wouldn’t budge. As soon as we pulled away, I felt my eye start to swell.

“When we arrived at the farm, I put on my bee suit before getting anywhere near the bees. The hive was already set up on the property, so all we had to do was put the frames into the hive, close it up and wait for the bees to settle into their new home. By this point, my eye was almost swollen shut, so we bid farewell to the bees and headed back to the city. For the next week or so, my eye was larger than a golf ball. I hid out at my family’s cottage and wore sunglasses as often as possible. It wasn’t the most auspicious way to begin our adventure, but I refused to be daunted.

“We quickly discovered how much we didn’t know about beekeeping. For instance, a beekeeper needs to be able to distinguish between a drone egg cell and a queen cell, but to our untrained eyes, they all looked the same. If your hive is laying a lot of queens, it means that there is either no queen or that the current queen is sick and about to die, so I was worried. Luckily, Stefan and I found a thriving beekeeping community in Ontario, who saved us from our ineptitude. I took a picture, uploaded it to a Facebook group, and within 10 minutes, I had an answer. The group identified the cells as drone cells, and reassured me that there was no need to worry.

“But no online forum could have prepared us for swarming. It usually happens in the spring, when the queen is laying a ton of eggs and the colony outgrows the hive. She’ll take a couple thousand bees from the original colony and fly away to find a new hive. Once the bees swarm, you only have a day or so to move them into a new hive—otherwise, they’ll leave for good.

“One day in June, we were at our hive and heard a loud buzzing coming from a nearby tree. We glanced over to see that at least half of our colony was clumped in the tree. We had learned about swarming in our class at Dancing Bee Equipment, and we’d already bought a larger hive in preparation for the possibility, but confronted with our first real swarm, we were wracked with nerves. We put on our beekeeping gloves and suits and sifted carefully through the bees with our fingers, until we found the queen. We placed her inside a large cardboard box, leaving the top open, and within three hours, as we watched in fascination, the rest of the worker bees had followed. From there, we located the queen again and placed her in the new, larger hive. Then we scooped up the rest of the bees and gently placed them in as well. We were so proud of ourselves for successfully managing our first swarm. 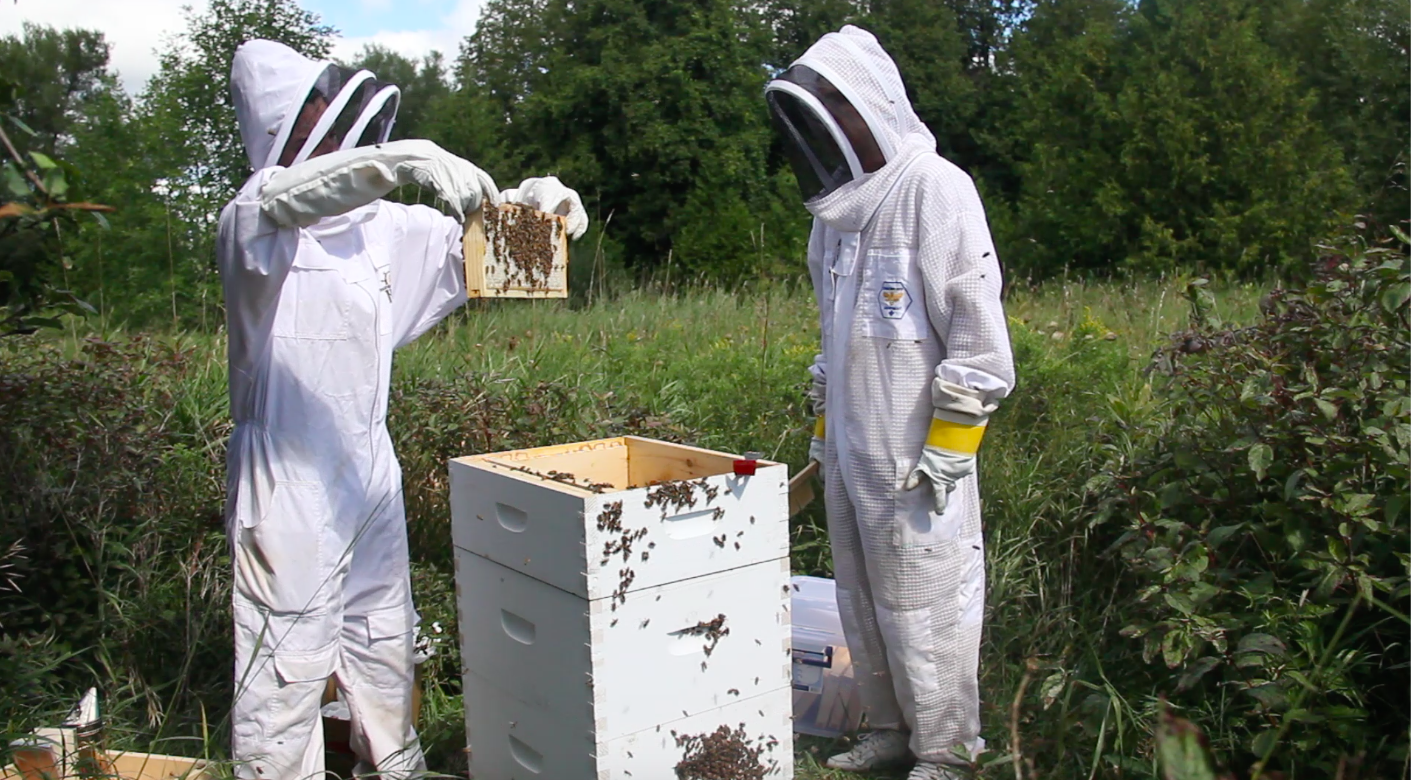 “It sounds like a lot of work when you’re getting started, but, aside from the occasional swarming, which happens once or twice a season, bees are surprisingly low maintenance. During the spring, we drive up to the farm twice a week because we want to be able to catch the bees if they’re swarming. Otherwise, we check on them once a week, which makes for a nice day trip. We usually pick up iced coffees and take photos and videos for our beekeeping vlog. When we get to the farm, we open the lid of the hive and inspect the brood pattern, which is basically checking in on the queen’s eggs. In the summer, drunk on the nectar of fermented fruits, they’re lazy and slow. You get to know how their moods and rhythms change with the seasons.

“Peak honey production usually occurs in July, but since we got our bees later in the season, we weren’t sure if they were going to produce. Within a few months, though, the frames of our hives started to fill up. It was the most delicious honey I’d ever tasted—sweet and buttery. The property is filled with wildflowers, which gives the honey a distinct, light flavour. We made sure to only harvest the excess that the bees wouldn’t need to survive the winter. To do this, we gently brushed any bees off the frames and put the frames in a rubbermaid box to take back to the city, where we used an extractor to push the honey out—a sticky, messy job, but incredibly satisfying.

“After giving most of the honey away to family and friends, I began thinking about how to expand and even monetize the next season’s crop. I researched the benefits of using honey on skin and learned it has moisturizing and anti-inflammatory properties, and acts as a natural exfoliant. I’d been using honey on my face for years. I figured why not try marketing a honey-based skin care product. I found a Canadian cosmetic chemist online and sent them a list of the main ingredients I wanted to use—honey, aloe and hyaluronic acid, which increases skin moisture—along with the function I wanted the product to have, and they came up with a formula. Then I sent the formula, along with some jars of our honey, to a Canadian lab that manufactures skincare products. Two months later, in April of 2021, we received our first sample of the hydration mask.

“We called our brand Mi-el Skincare and launched our hydration mask this past February. One of my goals with Mi-el is to create products that have a positive impact on the environment. The growth of our brand increases the number of local pollinators in Ontario. We started with 10,000 to 15,000 bees, which then grew to around 80,000 by the end of the first year. Now, we have three hives—about 240,000 bees in total. Since most plant species rely on pollinators to reproduce, more bees in the ecosystem means we’re better able to support the growth of trees, plants and crops.

“I imagined that packing orders would be a nine-to-five job, but I spend five hours a day working on packaging for new products, testing marketing initiatives, reaching out to influencers and making TikToks to promote the product, and it’s been pretty lucrative so far. Our living room has become a warehouse—we even have a backdrop for photography hanging from the ceiling. I hope to turn Mi-el Skincare into a full-time gig in the next couple of years.

“When I first started this project, my friends thought I was nuts. I’m a city girl who’s into makeup, beauty and fashion. I didn’t have any expectations. It was just a hobby. But over time, we fell in love with beekeeping. Spending time at the farm, disconnecting from the city, and opening the hives up to see the progress that the bees have made each week is immensely rewarding. We have formed a bond with our bees—it’s almost like having a pet—and we love to sit in the sun and watch them work. I am constantly in awe of them, marvelling at how each one has its own specific job to do. Our goal is to one day have our own bee farming property, with hundreds of hives.

“After that first eyelid sting, it took me almost a year to feel comfortable around the hives without my suit on—that thing makes you feel invincible. But I chalk the experience up to an occupational hazard, and a small price for what has become one of my happiest and most therapeutic pursuits. Oh, and despite only wearing my suit during swarms now, I haven’t been stung since.”