When this couple had to cancel their wedding, they threw a tiny socially distanced ceremony instead

When this couple had to cancel their wedding, they threw a tiny socially distanced ceremony instead 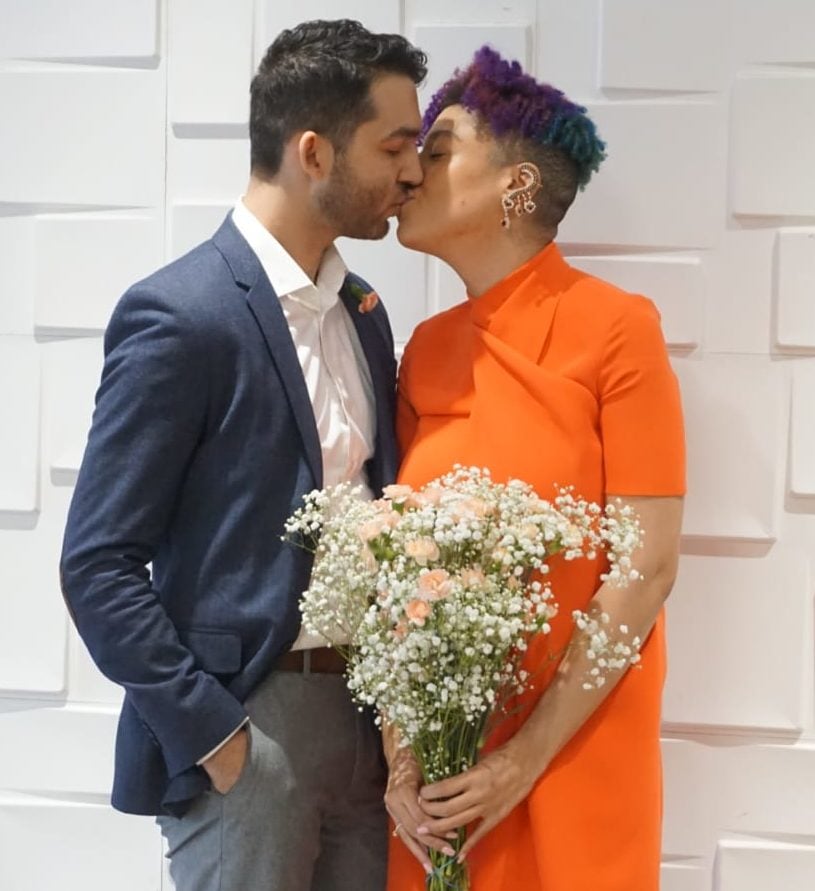 Petr Balaz and Tessa Gooden, both music producers, met in January 2017 at a fundraiser for MusiCounts and got engaged in November 2019. Their wedding was set for mid-April, but when the pandemic forced them to cancel, they threw an impromptu socially distanced ceremony instead.

Tessa: I was born and raised in Sudbury and played cello in the Sudbury Symphony Orchestra.

Petr: And I’m in a rock band called Running Violet. We have pretty diverse musical backgrounds.

Tessa: Our relationship started off as a musical collaboration. We’ve released albums together and we also produce music for other artists and for film and TV—mostly R&B, hip-hop and popular stuff.

Petr: There was definitely a physical attraction, too. That came first.

Tessa: For our first official date we went to the movies in Yonge-Dundas Square. Two and a half years later, he took me to the exact same spot where he first saw me on that day. This was pre-Covid-19 so it was crazy-busy, but I only had eyes and ears for him. He proposed right there in the middle of Yonge-Dundas Square. Neither of us wanted a big spectacle of a wedding; we contemplated city hall but our parents weren’t into that idea. So we decided to open it up to 40 people on April 11 at the Freedom Factory Gallery on Queen West, which our friend Tiffany owns. She hosts micro-weddings, with a small ceremony and cocktail party inside the gallery. There’s passed food, an open bar, champagne toasts, a photographer, live music and party favours, all for $3,000. It gave us everything we’d want from a regular wedding, but wrapped up in this easy package.

Petr: We wanted to keep it small, and only invited people we’d want to have over at our house for dinner. We are also expecting a baby in August, so April felt comfortable for our timeline.

Tessa: For the reception, we had opted for a rustic map theme because we’re both from immigrant families. Petr’s family came to Canada from the Czech Republic, and my mother’s family emigrated from Italy to Argentina and then later to Canada. My dad’s family was originally from Jamaica. As everything started unfolding with Covid-19 in mid-March, we realized our wedding wasn’t going to happen. We were a bit in denial at first. But things got more real every day. Nearly half of our guests were flying in from elsewhere. On March 20, we sent a note to all our guests cancelling the event. We originally thought of postponing the wedding, but we were looking at dates around my due date, or slightly after, which just didn’t seem feasible to us. So, we thought, why bother waiting? 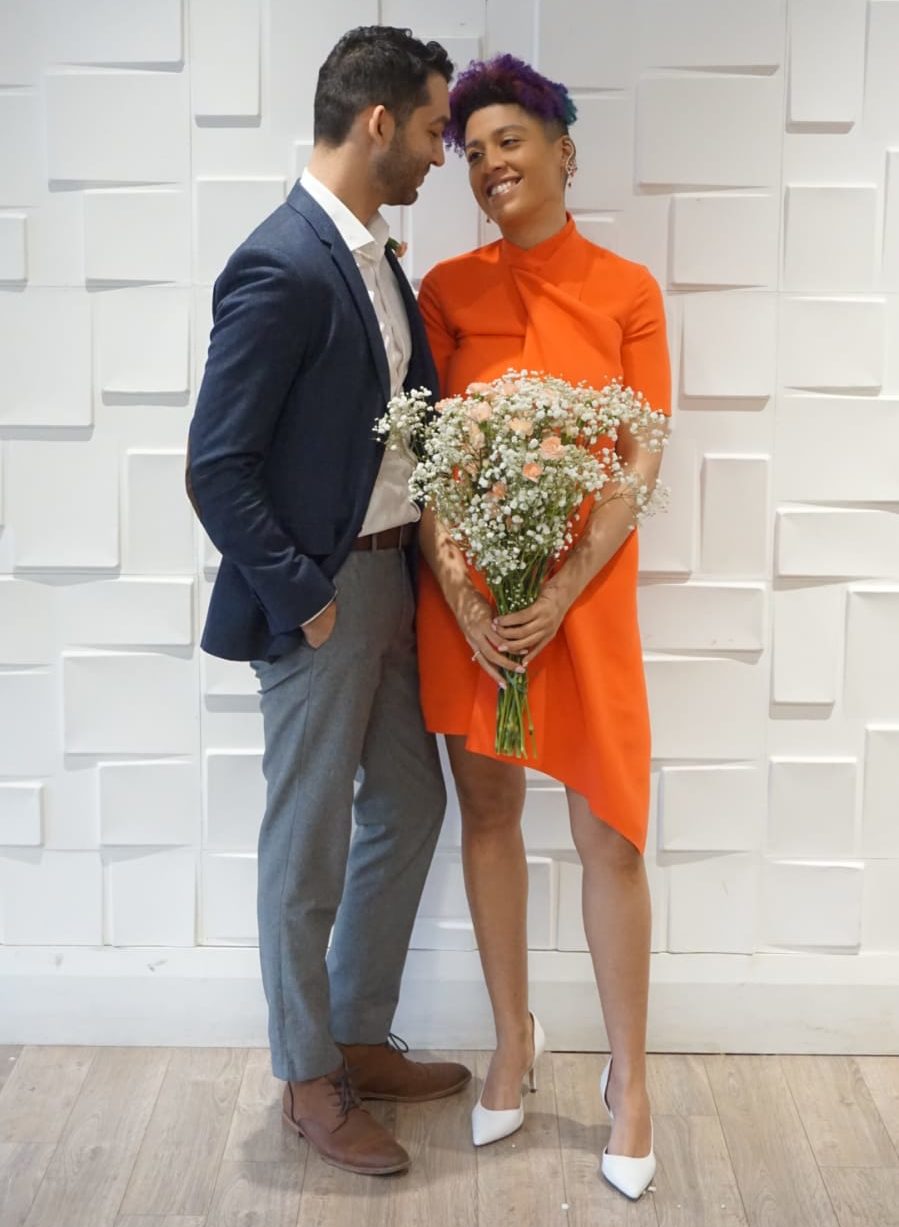 Petr: Our licence was due to expire in 90 days. It felt strangely simple to make the decision to just get married. However, our officiant for the original wedding wasn’t able to perform the ceremony. She has an at-risk husband and didn’t feel comfortable, which was totally fine.

Tessa: She backed out the morning of March 23. Afterwards, we agreed it didn’t matter when, it didn’t matter how, but we wanted to find someone to perform our marriage. At 12:30 p.m. I posted on our East Danforth neighbourhood Facebook group and asked if there was an officiant in the area who would be willing to perform a socially distanced signing or ceremony for us. There was an overwhelming response. Fifteen minutes later, at least 100 people had reached out. One woman introduced us to her friend, Chris Yu. We got on the phone with him at 1 p.m. and agreed to hold the ceremony two hours later, at 3 p.m. 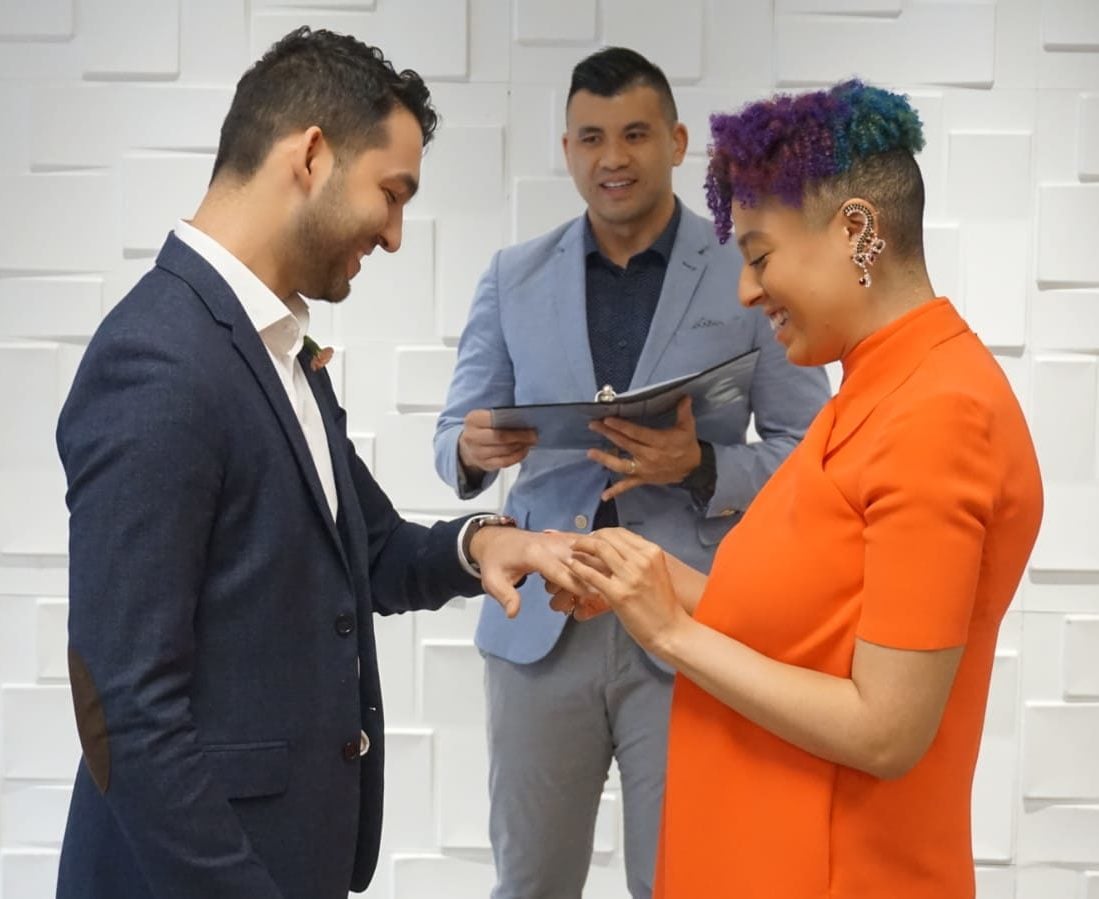 Tessa: I’m sure a lot of brides get anxious the night before their wedding. But we woke up that morning not knowing we’d be getting married that day. There were three hours between deciding we didn’t care when it happened to realizing it was happening that afternoon. It was surreal. I was grateful we had our rings ready. Petr’s bandmate Jordan and his partner, Martha, agreed to be our witnesses. They showed up at 2:30 p.m. with flowers and a digital and Polaroid camera. We were so thankful because we didn’t think of any of that. My maternity wedding dress had arrived but I wanted to save it for when we eventually have a party. There was only one dress in my closet that fit, so that’s what I wore.

Petr: I hadn’t bought a suit for the wedding, so I pulled out the one suit I had, shined my shoes and that was it. There were serious prom vibes. I was so excited.

Tessa: The officiant, Chris, offered to open the church he works at, Mercy City Church, which was great because five people in our apartment would have been tight. It had been closed for two weeks, and he went and disinfected the place before we arrived. It was the first time we had left the house in quite a while. When we got there, he greeted us with hand sanitizer at the door. We handed him our marriage licence and stood against one of the church’s prettier walls for the ceremony. Chris told us that a woman in our neighbourhood had already paid him for the service, and that brought us to tears. We messaged her after and she told us she had been taking in so much negativity and just wanted to do something good. We were really touched by that.

Petr: Jordan brought his guitar and started playing acoustic music—which was perfect, because it had been dead silent in there before. 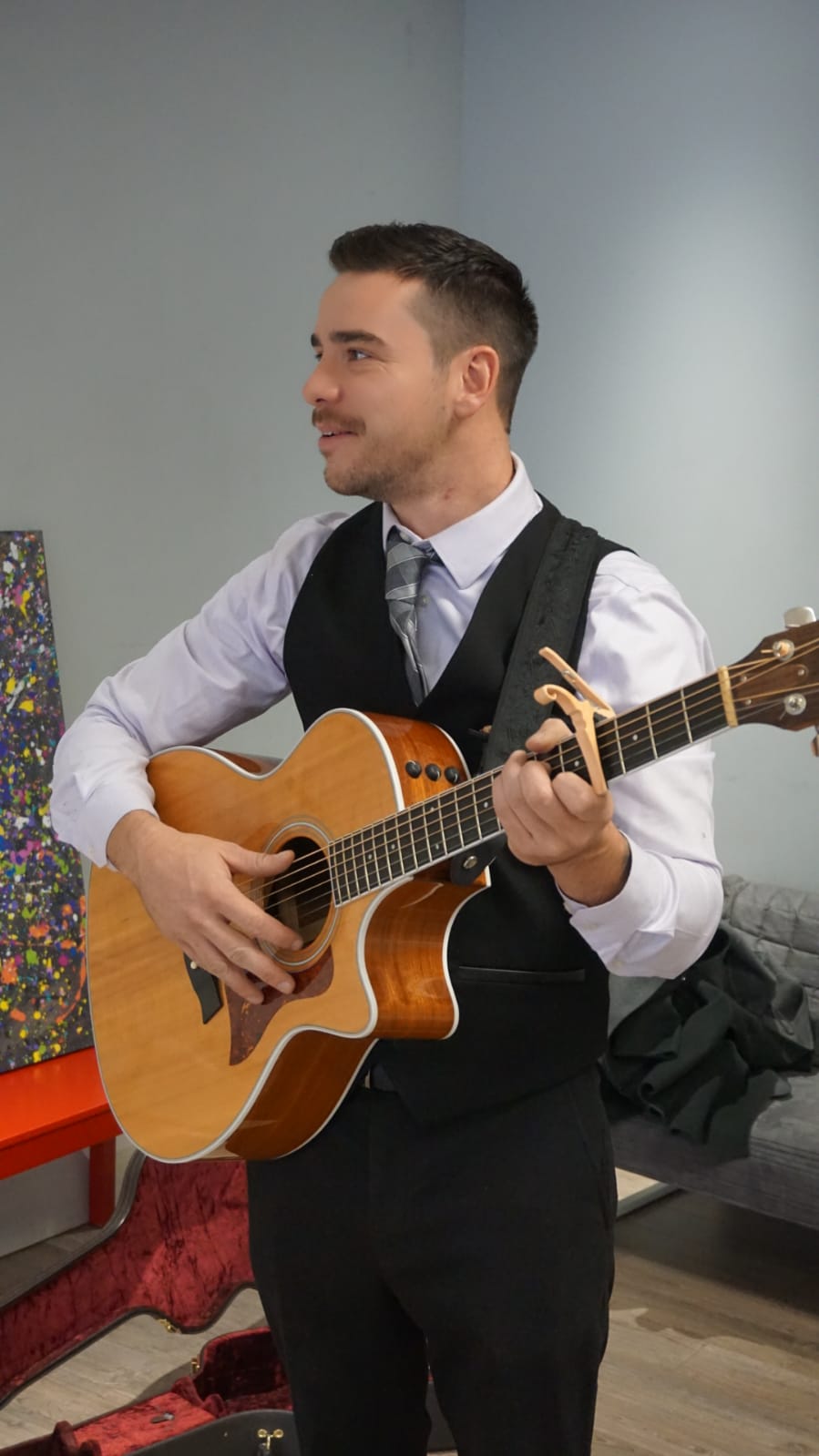 Tessa: His partner, Martha, took photos during the ceremony. We did a ring exchange and recited our vows. After, we talked about how it was the best way our wedding could have turned out. I just looked at Petr the whole time. That was all I needed. It was totally drama-free.

Petr: I tried to be cool and not smile but I blacked out, and turns out I was grinning in all the pictures.

As told to Jean Grant