When the pandemic hit, we abandoned our van life in Morocco to catch an emergency flight

When the pandemic hit, we abandoned our van life in Morocco to catch an emergency flight 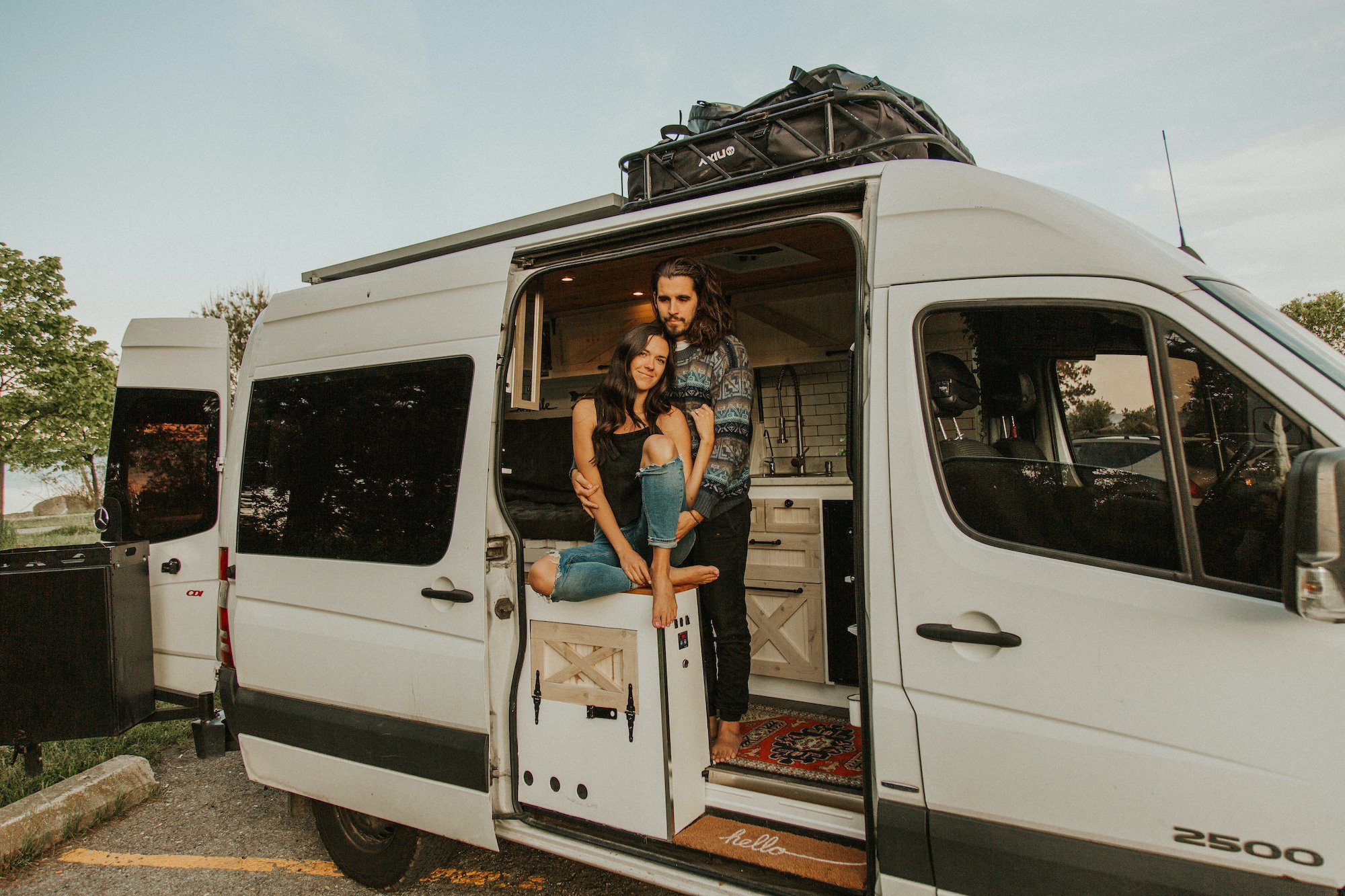 Before my fiancée, Eamon Fitzgerald, and I bought our van in 2017, we almost signed a lease for an apartment in Toronto. We were having a hard time finding a place and finally we had one in our hands: $2,200 a month for a basement unit near Trinity Bellwoods. But we had caught the travel bug while backpacking together after university, and we just couldn’t get the home-is-where-you-park-it lifestyle out of our minds. Just before we signed the lease, Eamon found a 2008 Mercedes-Benz Sprinter van for sale. I was 27 and Eamon was 25, and we were just getting our tea business, Chaiwala, off the ground. We figured we could travel the country with the business, park at beaches and Walmarts, build an Instagram following and sell our tea to cafés along the way.

So we dropped the lease and bought the van, which we named Trinity the Sprinter. It cost us more than $20,000 to buy and convert into our little home. We installed solar panels on the roof and hooked up three water tanks that connect to the sink inside. We put in insulation, wood panels on the walls and ceilings, a sofa bed, a foldaway table, a mini-fridge and a stovetop. Last spring, we installed a composting toilet so we didn’t have to rely on public facilities, gyms or cafés while we travel.

At 60 square feet, it’s pretty tight, but it’s been our home in Canada and everywhere we’ve travelled—from Collingwood and Banff to Arizona and Mexico—for three years. We’ve gained a large following in the van life community online and have developed a reliable source of income with our tea business, YouTube vlogs and paid partnerships on Instagram. Last summer, we shipped Trinity to Europe, where we spent six months travelling through the U.K., Ireland, France and Spain.

In January, we decided to go south to Morocco. The experience was amazing. We’d built so many memories in that van, and Morocco was shaping up to be one of the best. We spent more than a month travelling around the country. We camped in the Sahara Desert with locals. We spent two weeks kite-boarding in the sand dunes and drove up along the coast. You can park for free in a lot of places, so Morocco was even more camper van–friendly than Europe, which made it that much more comfortable.

Our plan was to stay in Morocco for the duration of our three-month tourist visa, but Covid-19 changed everything.

Throughout February, we didn’t hear much about the coronavirus. Living out of a van and driving around Morocco, we weren’t as plugged in to the 24-hour news cycle. By the end of that month, there weren’t even a dozen confirmed cases in Ontario yet and none at all in Morocco. There wasn’t much fear among the locals, so we weren’t worried.

In early March, our friend and former van lifer Lee MacMillan, who helps operate our tea business, flew in from Canada to stay with us in the van and explore Morocco for 10 days. We spent a few nights at a riad—a hotel built around a courtyard—in Marrakesh. We explored markets along the coast in Essaouira and made our way down to a fishing village called Tamraght, where we found an amazing spot on the beach. But within a matter of days, things shifted quickly. On March 11, the World Health Organization officially declared that this was a pandemic. At that point, there were a handful of confirmed cases in Morocco, and the shops started closing earlier in the day, around 5:30 or 6 p.m. Occasionally, a truck with a megaphone would drive by to broadcast a message. We don’t speak Arabic, but we understood “corona.”

One of our Moroccan followers on Instagram informed us that people were being told to stay at home and practise social distancing. The three of us isolated from other people and took extra precautions, like using lots of hand sanitizer. We had everything we needed. We were even off the grid, since we had solar panels on the roof of the van. We stocked up on a few thousand dirhams worth of food from a supermarket in Agadir, a bigger city south of the beach. Some pasta aisles were picked over, and grocery carts were full of canned beans, but we didn’t see the same panic-buying scenes that were playing out at Walmarts and Costcos in North America. 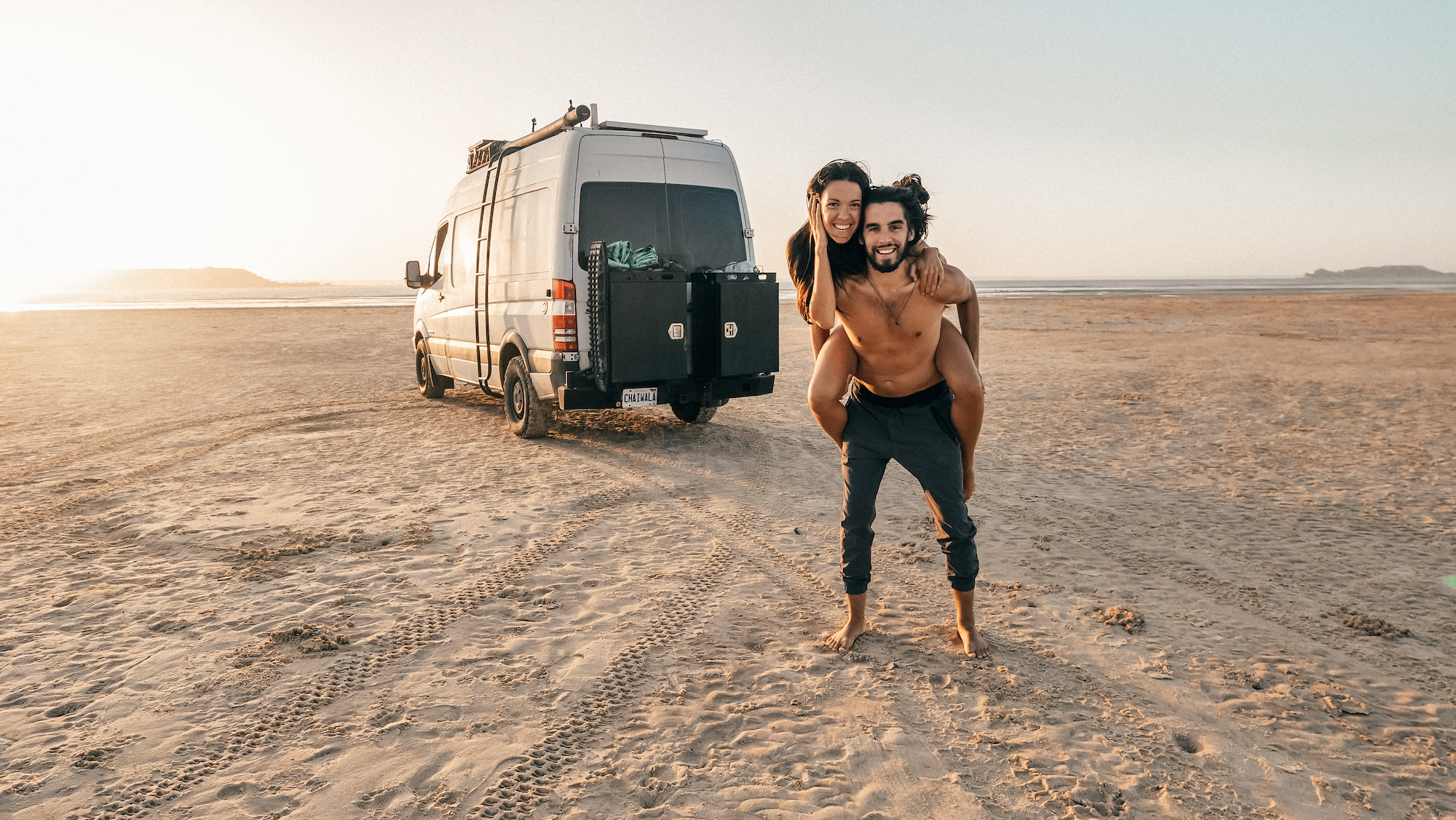 On March 14, Ottawa urged Canadian travellers to come home. Because we had our van, which housed everything we own, it wasn’t an easy decision to make—we’d have to abandon all our possessions. If we were just backpacking, it would have been a no-brainer. The next day, the Moroccan government shut the borders and cancelled all flights in and out of the country, including Lee’s, which was set to depart that week.

For days there was no news about repatriation flights, and Covid-19 cases in Morocco were doubling a couple of times a week. We were reassured by an email from our insurance provider that said we would still be covered, since we left Canada before March. But we knew that if the pandemic hit Morocco harder and one of us got sick, we would be at a disadvantage because we don’t speak the language.

On March 20, Canada announced it was sending a series of flights to Morocco. We registered with the Canadian embassy and waited on an email to confirm the process. In the meantime, we heard conflicting information. We joined a Canadians in Morocco Facebook group to get a clearer picture, but a lot of people there were confused too. Some were saying we should show up at the airport and look for a guy in a green vest. Others said you needed to get a special code to access tickets, which was true, but we hadn’t received one yet. Then we met another Canadian traveller whose sister was an RCMP liaison in Europe. She connected us with an RCMP member in Morocco, who sent us the code to get on the Air Canada flight that was scheduled for the next day. We weren’t sure when we were going to hear from the embassy. This felt like our only opportunity to get home, so we seized it.

Late Friday night, we booked the tickets for $1,272 plus tax each, and the flight was scheduled for 6:50 p.m. on Saturday. We were a six-hours drive south of the airport, which is in Casablanca, so we set off early the next morning and left the van at a secure long-term parking facility. It will cost us 120 euros per month to store the van in Morocco. We packed just one bag each: a few T-shirts, our camera gear and laptops. I wanted to bring more of my belongings home, but we ended up leaving everything else in the van.

The 450-seat flight was completely full, with no space for any physical distancing. The service was different from a regular eight-hour flight: each seat came with a small water bottle in advance so interaction with the crew could be limited. They also provided tinfoil-wrapped beef sandwiches, which they basically threw to each person to avoid contact.

When we got to Toronto, my brother dropped off a car for us at the airpot and we drove to Lee’s parents’ house in Barrie, where we quarantined for 14 days in their separate basement apartment. Then we went right from there to my parents’ place in Mississauga. 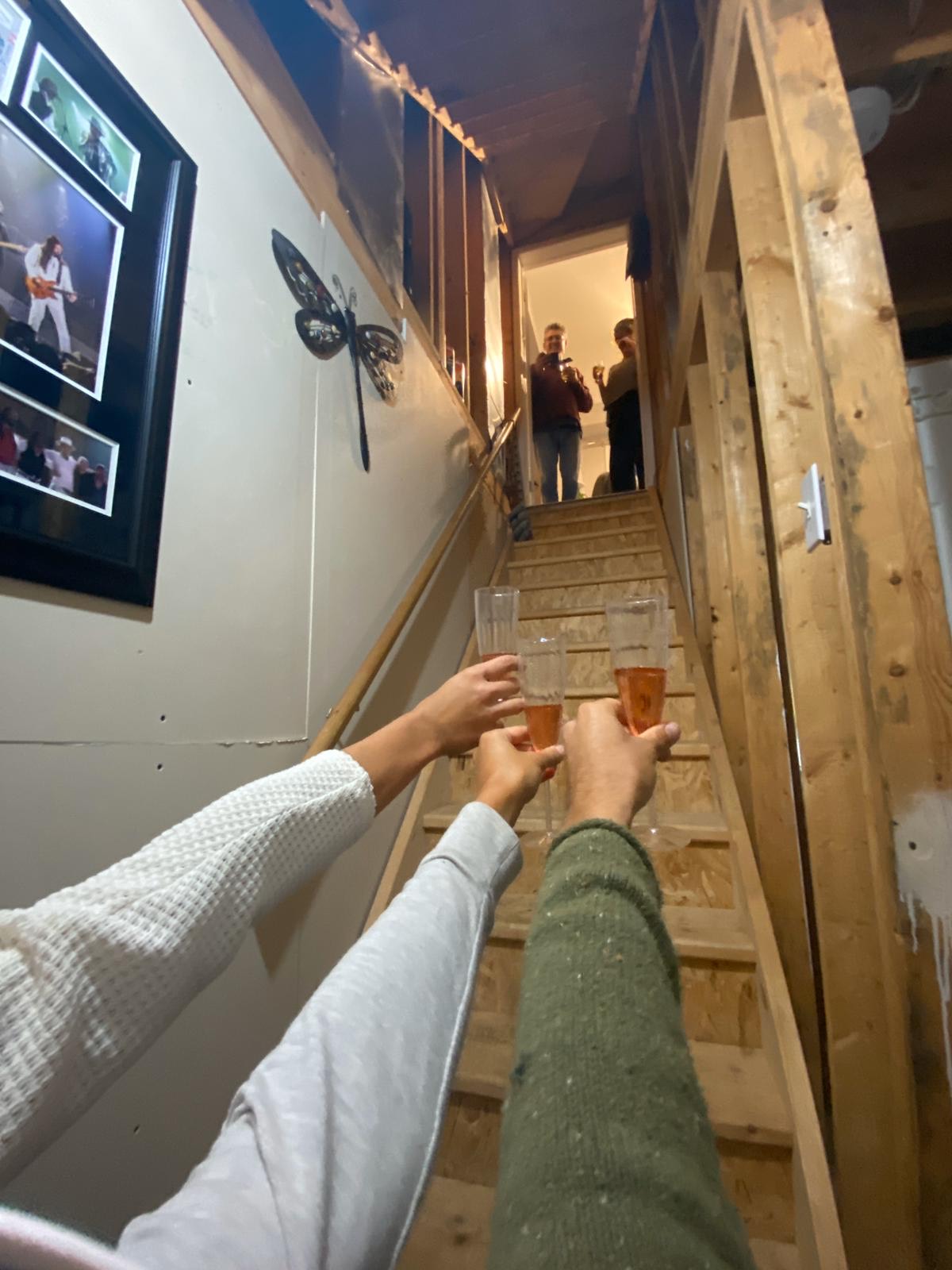 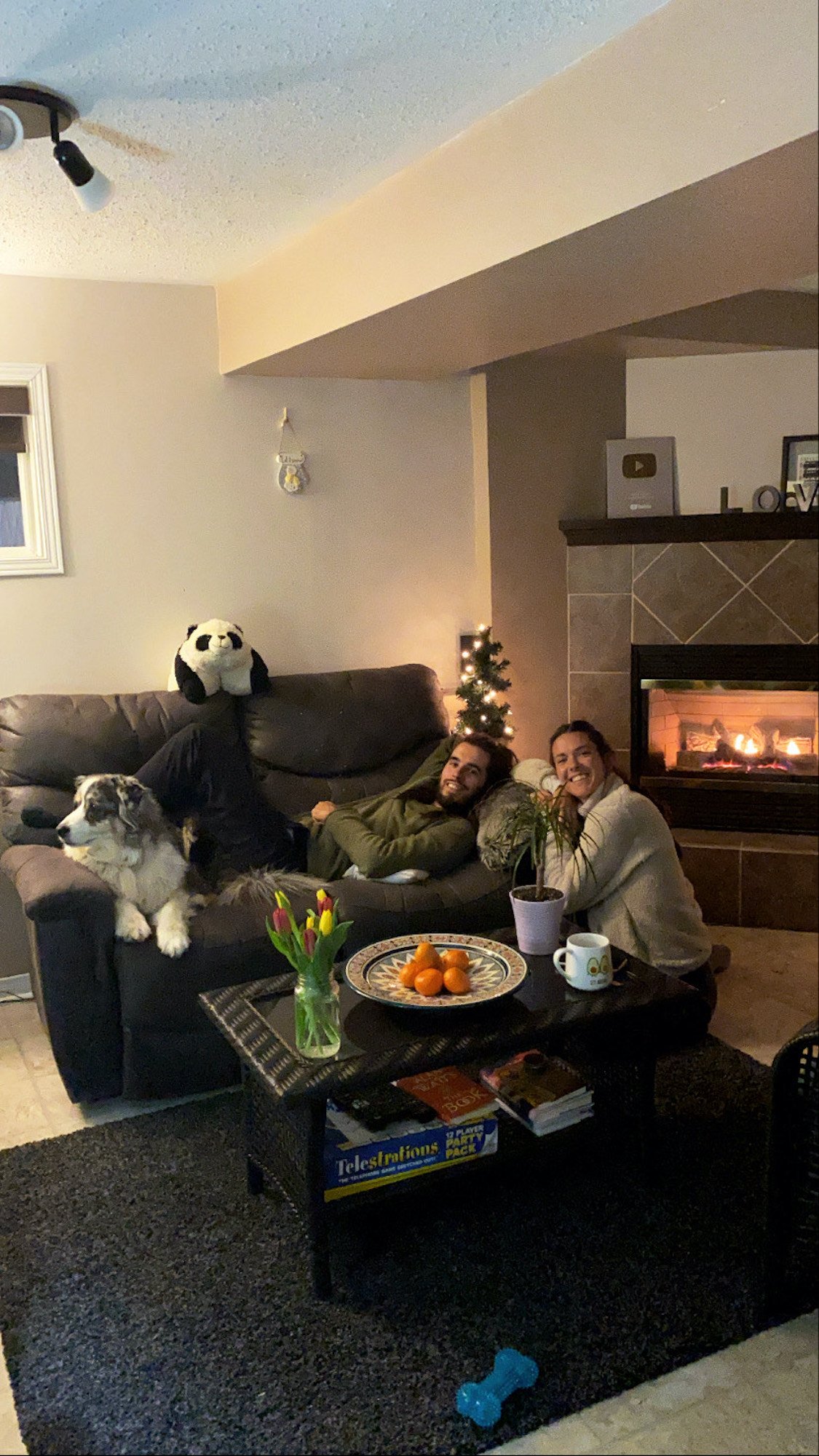 As the pandemic progresses, we’re very concerned about our tea business and our café clients. We can transition to online sales now, but a lot of our bootstrapping mom-and-pop clients, mostly in Ontario, probably won’t make it through this. We’re not sure if the government subsidies will be enough to keep them afloat.

As for van life, we wanted to keep living the minimalist lifestyle, and Lee lent us her old converted Sprinter van to live in for the time being. We also decided to buy a new cargo van and convert it like we did with Trinity the Sprinter. To get the materials we need, we’ll be doing curbside pickups from Home Depot to maintain physical distancing. We know that our followers originally came to us for the travel content, but we hope that our community is there for us as much as they were for the exotic locations.

The second we can, we’ll go back to Morocco to get Trinity. But that won’t be for a while. Until then, we’ll only be able to travel locally within Ontario, which is why it will be nice to build this new van—so we can rediscover our own backyard.

—As told to Jonathan Forani