“We had no idea when we were getting off the ship”: What it was like to be quarantined on the Grand Princess cruise ship

“We had no idea when we were getting off the ship”: What it was like to be quarantined on the Grand Princess cruise ship 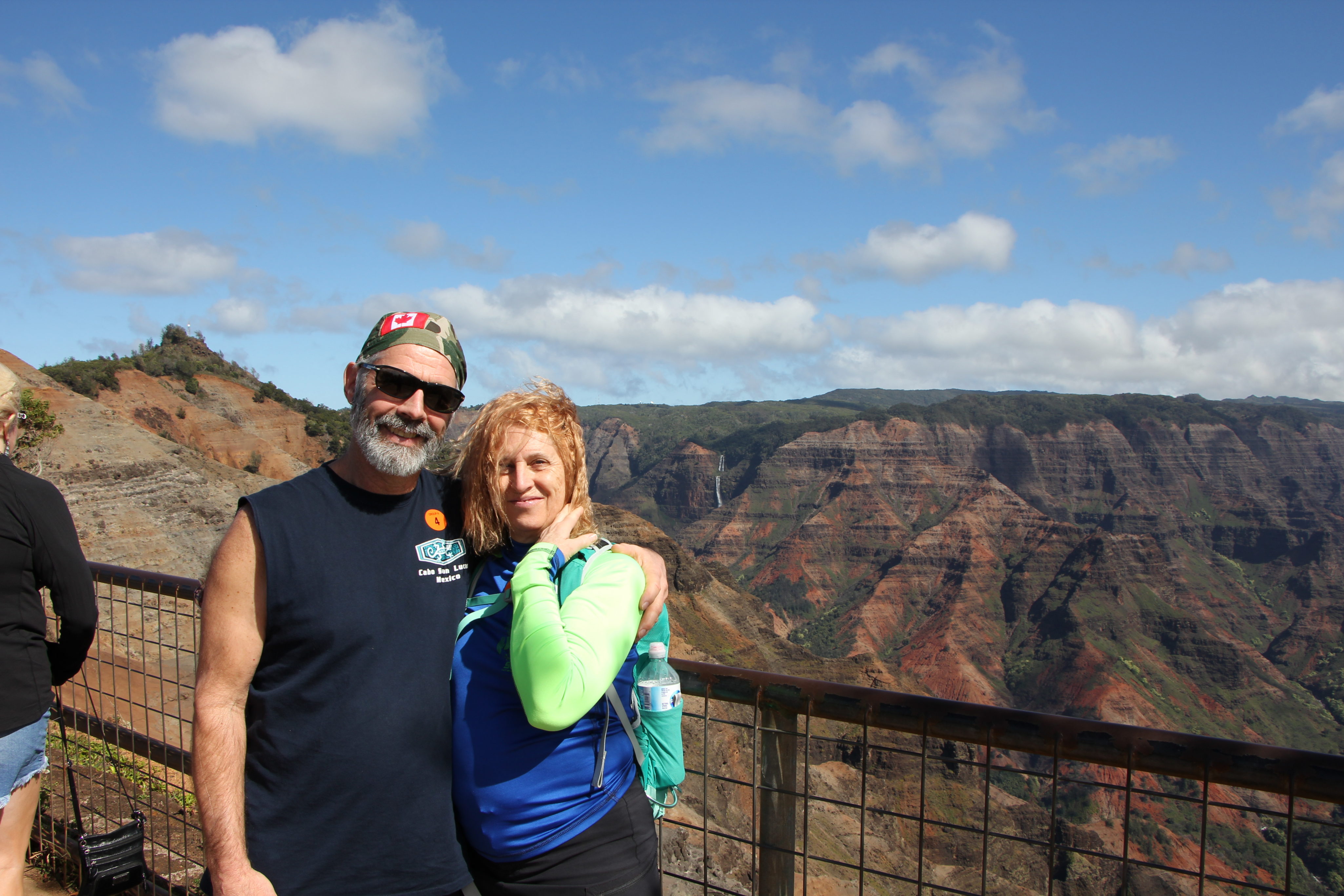 We’ve been on six cruises, three with Princess Cruises, so the company always updates me with deals. Recently, we got an offer for a 15-day journey from San Francisco to Hawaii. I said to my wife, Ruth, “Well, heck, that might be really nice.” So we booked our tickets. We left on February 21, which was my 63rd birthday. I didn’t realize until later how grateful we’d be to have booked a room with a huge balcony.

We were well aware of the Diamond Princess quarantines in Japan before we departed, but it didn’t concern us at all: we’re both healthy, and we don’t have any immune or respiratory issues. We’re pretty roll-with-the-punches kind of people. The first eight days were cruise-as-normal. We had four wonderful days on the islands of Hawaii, going whale watching and doing excursions through beautiful rainforests. Our last stop was Hilo, and then we started our journey back. We were supposed to stop for a few hours in Ensenada, Mexico, on Thursday, March 5, before heading back to San Francisco to dock on Saturday.

On Wednesday morning, Ruth and I woke up and turned on the TV. There’s a channel that shows you the voyage of the ship and the projected plan, and we noticed that the ship had veered quite a bit off-course to the north. Then, a few hours later, we got an announcement from the captain saying that a passenger who was on the Grand Princess just prior to our boarding had passed away from Covid-19. The cruise line was bypassing the Ensenada, Mexico, port and we were headed right back to San Francisco. We weren’t worried about it, though. We’re still relatively young— Ruth is also 63—and we weren’t concerned about our health.

The general mood of people on the ship was still good at this point. The cruise was 95 per cent over with anyway. That whole day was pretty normal, except they cancelled the entertainment in the theatre that night. They got some old people wound up when they cancelled bingo. At the buffet, they no longer allowed you to use tongs to grab food. They handed everything to you.

On Thursday, at lunch, we went down to the pizzeria and ordered some calzones. At about 1 p.m., an announcement was made. The captain said: “Due to an abundance of caution, we unfortunately will be relegating you to your stateroom for the rest of this cruise.” There was this horrendous sigh in the restaurant. You could literally hear 150 people go, “Oh, no.”

After that, all our meals were delivered to our door. They would knock on the door, leave our food outside, and by the time we answered, they were gone. That was their protocol to limit exposure. We certainly didn’t go hungry. We had omelettes for breakfast, chicken parmesan, and there were always desserts.

They brought activity packages to our room, which included cards, Sudoku, a couple of craft kits. They did an outstanding job trying to keep us as happy and as comfortable as possible. We were lucky we had a balcony. We had two couples from California on either side of us, and we could stick our heads out and talk to our neighbours.

They made the Internet free for everyone to use—it’s usually $160—so I was able to keep in touch with people through Facebook Messenger and video calls. My kids remained calm, but I think they were more worried than they let on. The frustrating thing was that I could google things on my phone and tablet, and I was learning information four or five hours before the captain announced it. For example, on Saturday, I found out from Google that the Princess was not allowed to dock in San Francisco.

The ship was now in a holding pattern. We were doing large circles in the ocean about 15 or 20 miles off of the coast of California. We didn’t really know when we were getting off the ship. It’s like, Oh man, another day, when’s this going to happen? We were starting to get frustrated. I said to Ruth, “I know exactly what’s going to happen here. We’re going to be quarantined from the minute we get off the ship.” There was already some chatter online that they weren’t going to leave us on the boat because that didn’t work with the Diamond, where they were quarantined for two weeks and 700 people got the virus.

Eventually, on Sunday, after four days of quarantine, we found out online that we were going to Oakland, California, the following day. When the captain came on a few hours later, he explained that the disembarkation process was going to be a minimum of two to three days. They were taking the sick people off the boat first. At that time, 21 people on board had tested positive for the virus. Stage two was residents of California. Stage three was the rest of the United States, and stage four was international guests.

On Monday morning, we noticed that we were getting closer to land. Just after lunch, around 1 p.m., the Golden Gate Bridge came into view. Then we got a knock on the door with a note that said we had to have our bags packed and ready to go. We were confused because we thought we were going to be on the ship until Wednesday or Thursday. A friend of ours on Facebook messaged me and said, “I hear you guys are getting on a plane flying home tonight.” And I was like, “Where the hell did you hear that?” There was a news conference and she sent me the clip. Shortly afterwards, I got an email from the Canadian government saying they were flying us home.

At about 4 p.m., they announced that we could leave our cabins with the other Canadians in groups. Then we waited in a long line for more than two hours. The goofy thing is that they had been telling us all cruise long, “Don’t mingle in big crowds. Try to keep six feet apart from one another.” Then they take 200 people half an inch apart. Everyone was wearing masks, and the screening staff had white smocks on and plastic surgical shields over their faces.

As soon as we stepped off the ship, we could see white tents with Canadian logos on it. I thought, Wow, we’re going home. The other thing that surprised us was that the healthcare workers and people who did our testing were flown in from Canada. They took our temperature and asked us how we were feeling: if we had headaches, muscle pains, rashes, respiratory concerns. They changed gloves between each guest, so it was not a quick process. I noticed that there were two people who got nasal swabs and were taken aside. They were musicians who worked on the ship. 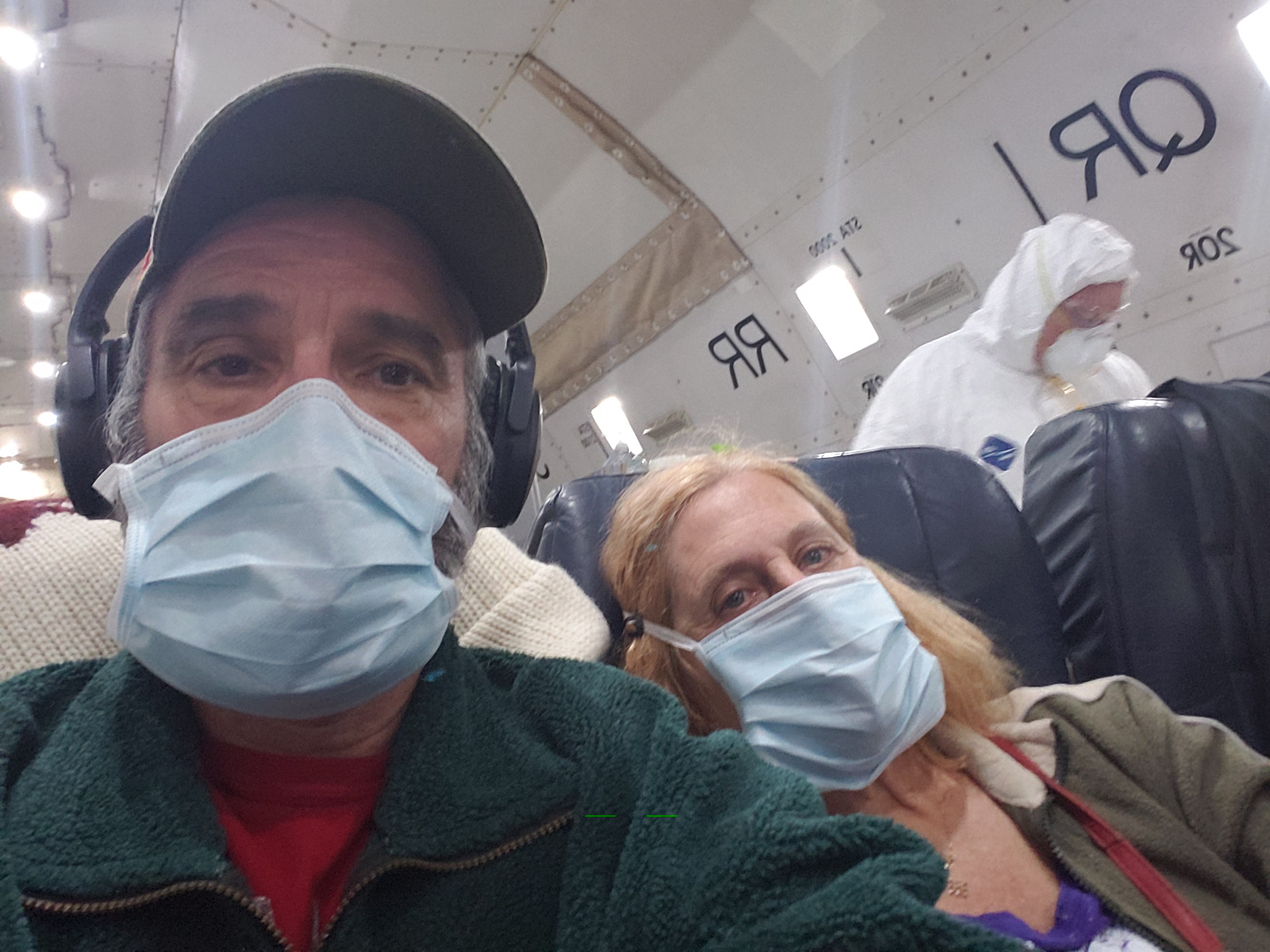 Afterwards, we boarded a bus to head to the airport. A state trooper followed the bus and a state trooper led the bus from the ship docking area right to the foot of the stairs of the airplane. The crew on board were all wearing hazmat suits with air packs on their backs. They announced through a megaphone when we were going to be taking off. He goes, “Clearly you can see I’m not a stewardess. You all know how to use a seatbelt. So put your seatbelt on.” Just before we took off, somebody around us started singing “O Canada.” Everyone joined in. It was quite a patriotic moment.

It was an old cargo plane and there were no windows. This thing rattled and banged. No one got any sleep, but we were tremendously thankful to be on it. We took off at 9:45 p.m. and landed in Trenton at 6:15 a.m. We rolled up into a big hangar and were met by Red Cross. They were all yelling and cheering with signs saying “Welcome Home.”  We thought we were pariahs, that we weren’t going to be wanted. But we walked in there and they cheered for us. There were tears running down my face. We had four days of uncertainty: Are we getting off? When are we getting off? And then all of a sudden we’re back on our own soil, and you get such a warm, loving welcome.

Our release day is March 24. When I get back home, the first thing I’m going to do is hug my kids and grandkids. And then I’m gonna get a beer. I absolutely would not hesitate to hop back on a cruise boat. We have one through the Baltic planned for May of 2021, departing from London. And, believe it or not, it’s on the Grand Princess.