Back in June, when Donald Trump announced he would be suspending H-1B visas—ostensibly to keep Americans first in line for jobs—it was a dark day for the thousands of skilled foreign workers who were working or planning to work in the States. But America’s loss may be Canada’s gain. Shopify’s Tobi Lutke tweeted that workers affected by the visa freeze should “consider Canada,” while the Kitchener-based tech innovation company Communitech launched an in-your-face billboard campaign in Silicon Valley aimed at enticing the best and brightest across the border. Here’s Communitech CEO Iain Klugman on his $100,000 promotional effort and why Kitchener-Waterloo could be a kinder Silicon Valley.

So what is an H-1B visa, and why is Trump’s decision to suspend them so significant?
The H-1B visa is for highly skilled foreign workers—it’s the mechanism by which American startups, venture capital firms and big tech companies bring in the best people from all over the world. There are only 85,000 H-1Bs available in all of America, meaning that if somebody gets one, they’ve been pre-screened as top talent. Trump’s decision to freeze is them is one of many changes he has made to the country’s immigration policies. It has created a lot of fear and uncertainty among all of these smart and educated people who may find themselves unable to work.

So America’s loss could be Canada’s gain?
That is definitely what we are hoping for, and what we are trying to promote with this billboard campaign. Pretty much the day after Trump’s announcement, we started having conversations about what we could do. We knew this was an opportunity we need to take advantage of. The team looked at a few strategies, but decided that in these circumstances, we really wanted to underscore the idea of uncertainty. That’s why we went with this message of “What if?” The billboard shows all of these Google searches: “What if my visa gets cancelled?” “What if I lose my job and health care?” There are plenty of reasons to question some of the policies around immigration over the last four years, but this situation with H-1B visa is cause for specific worry, so we wanted to capitalize on that. It could be a short-term window, and we wanted to make some noise. 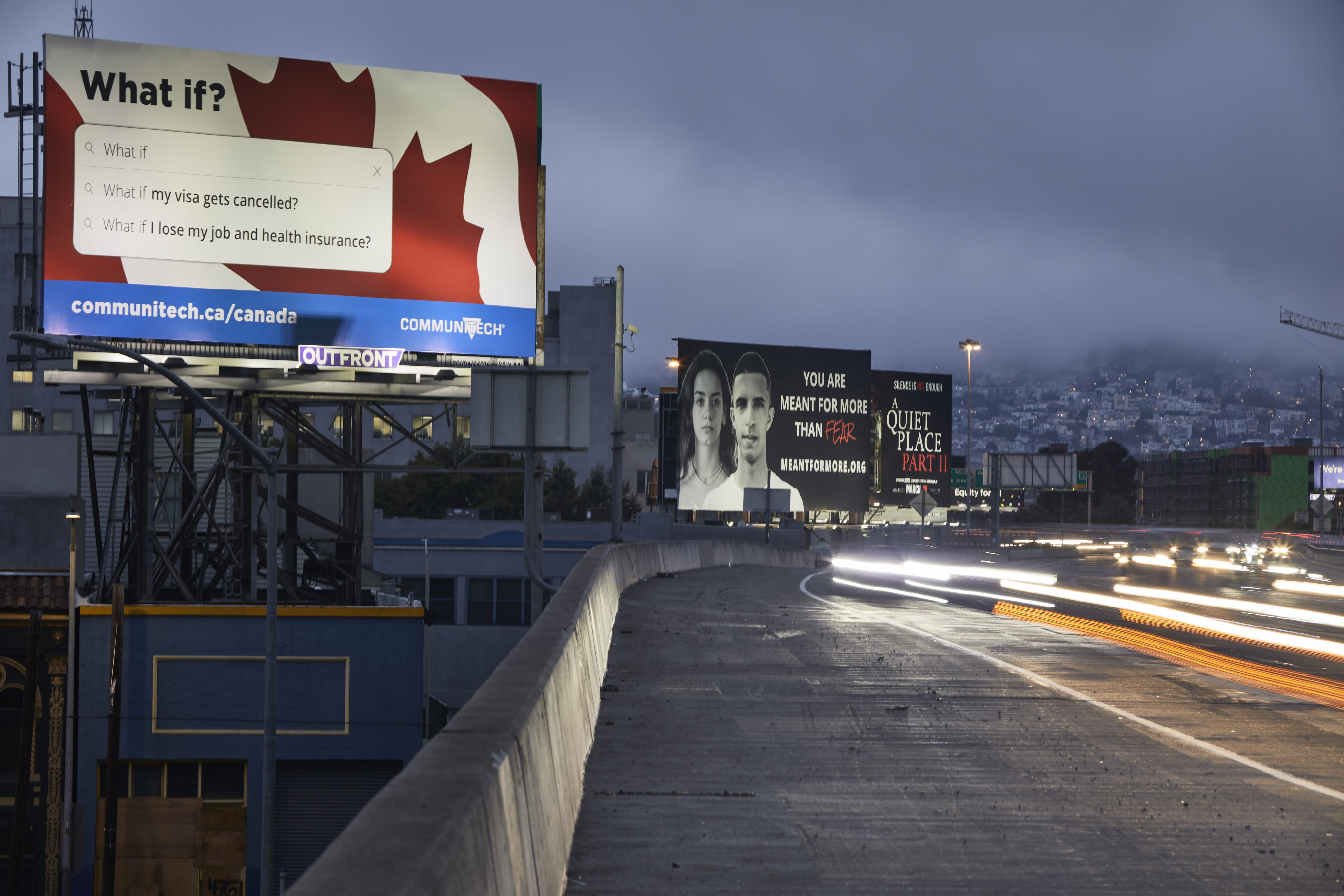 Short term because there could be a new guy in the White House soon?
The election is definitely significant, but even if there is a change, it will take some time before things get better. In the short term, we want to draw attention to what has happened with the H-1B visas, but in the long term, the campaign is based on building the brand of Canada in the tech world. When people outside of Canada hear that the Toronto-Waterloo corridor is the fastest growing tech space in the world, it’s news to them. People in the States know as much as Canadians know about Iceland.

Okay, so I’m a highly skilled worker. I’m considering the move. What’s your pitch?
My pitch is everything that defines this area—the great small and large cities, the diversity of people in business and government, our commitment to social justice and a civil society. When people are considering jobs, they consider two things: first, what is the work, who am I working for, and if job doesn’t work out, are there other companies that could also provide opportunities? Second is, what can I do when I’m not working? I think we come out extremely well on both sides.

You wrote an op-ed recently where you described American tech as morally adrift. Is Canada any different?
What we see in tech reflects the broader issues: economic polarization and issues around race politics that prevent tech, among other industries, from being more inclusive to minorities and talented immigrants. I’m not saying that Canada is perfect, but we are different. America is built on individualism, where as Canada is about collectivism. When you look at our tech industries you see that reflected.

The president seems to think that cancelling the H-1B visa is about keeping American jobs for Americans.
To the best of my knowledge, that’s his pitch, but it obviously fails to recognize that America and Canada have had prosperity and success because we are nations of immigrants. This grand experiment called America has lured many of the smartest people in the world. If you can do that you will win, but Trump doesn’t seem to agree with that.

Is it possible this is an anti-immigrant message for his base?
Trump understands his base and what they are going to respond to. One of the ideas that we had was showing the Canadian flag, the Statue of Liberty and the line, “ Bring us your tired, your poor, your tech.” If that’s what he’s doing, that’s fine by us. To anyone who is feeling unwelcome in America right now, I say, let’s talk!

Communitech dropped $100,000 on the billboards, which have been up for a couple of weeks now. Have you seen a return on investment?
Absolutely. In terms of the billboards, the goal was to get the attention of the media. Maybe a million people are going to see them in San Francisco, but we felt this was a good way to spark a conversation on social media about opportunities in Canada. That’s the real campaign. A lot of people in our industry have tweeted support. The goal is to get people talking and then to drop them off at Communitech’s landing page, where they can learn more about Canada, see testimonials from tech workers who have moved here and then go to our job board.

Is it too soon to ask about success stories? People who have come to your site and decided to make the move?
Our job is to raise awareness and then to fill the funnel. It’s up to the companies to land the talent—we aren’t involved in employment negotiations or hiring. I can tell you that our web traffic is up 164 per cent, and over 60 per cent of that traffic is coming out of the U.S.. That’s a good sign.

What’s next?
We are planning to launch similar campaigns in Boston and Austin, two cities that have large tech communities. We’ve already started social campaigns in those areas. Now we’re thinking about doing the billboards. This is a challenging time for obvious reasons, but the Canada brand is strong. We just want to get it out there.