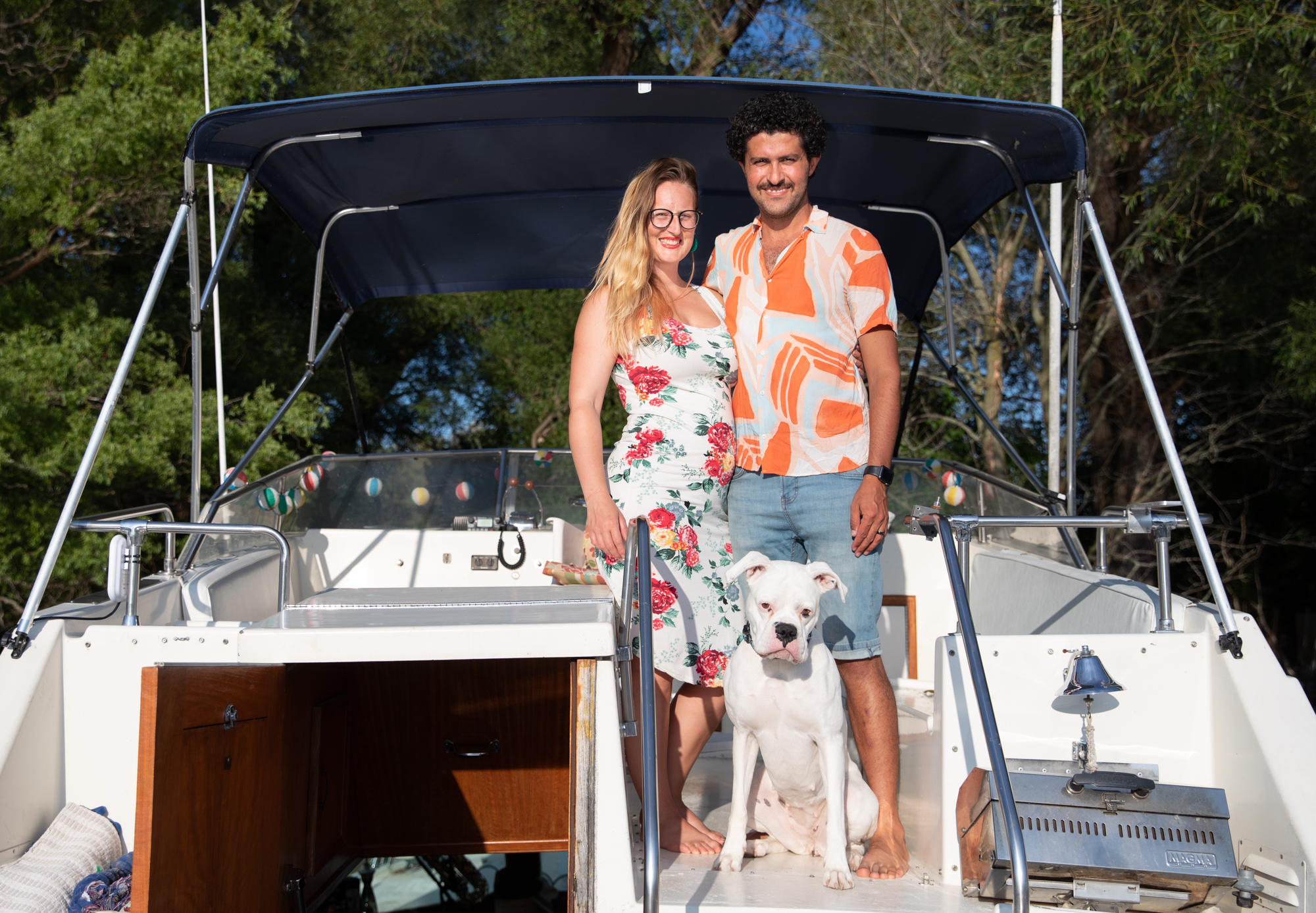 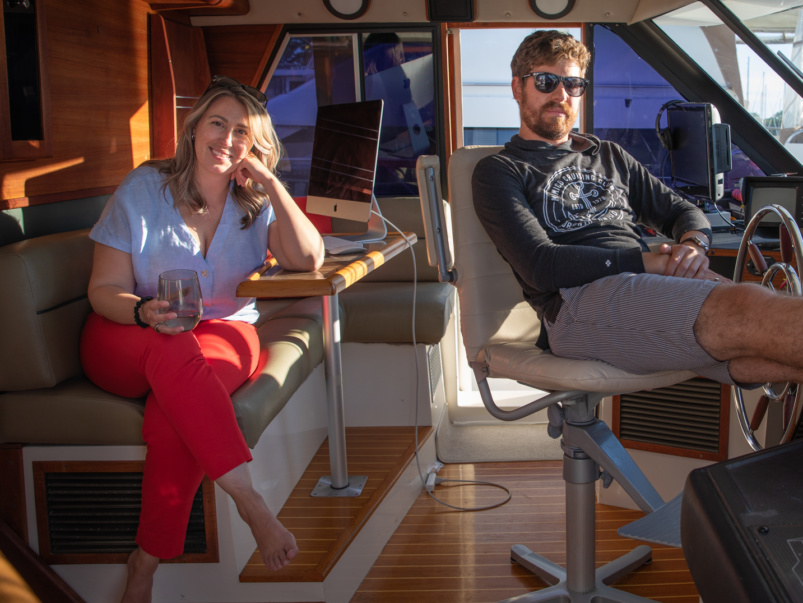 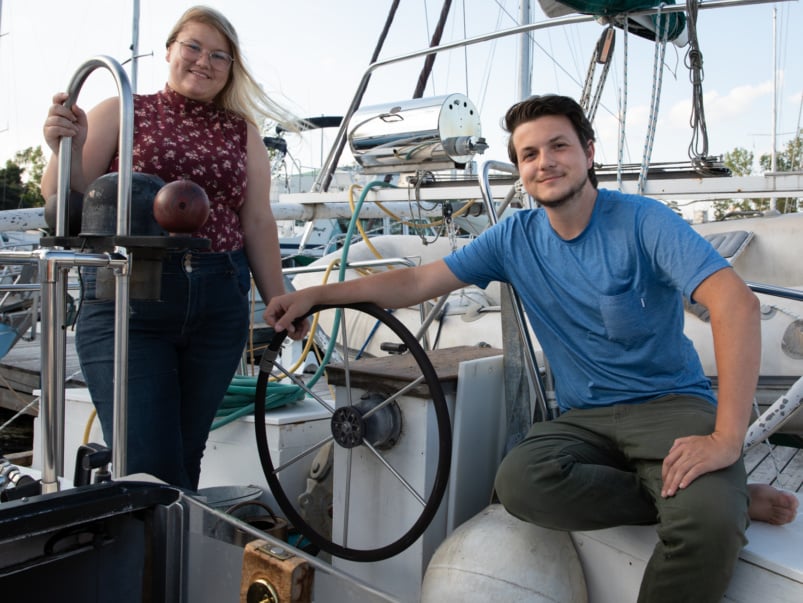 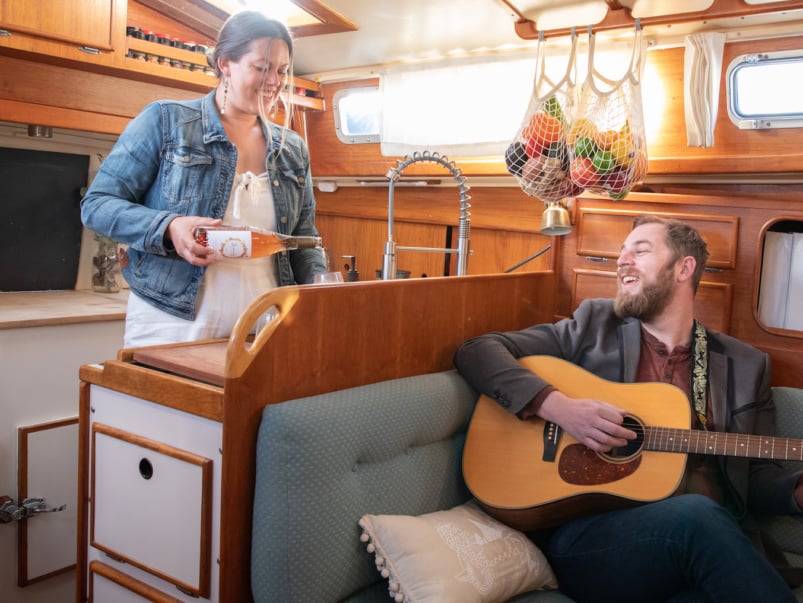 Who they are: Charlie Blanchard, a 31-year-old recruiter at Mindfield, her partner Siavosh Dana, the 33-year-old CEO of Axle, and their boxer, Sedna

What they bought: A 38-foot Hatteras motor yacht for $40,000, which they named Waldo

What it’s costing them: $6,600 per year for dry storage, insurance, docking fees and a marina-tender pass 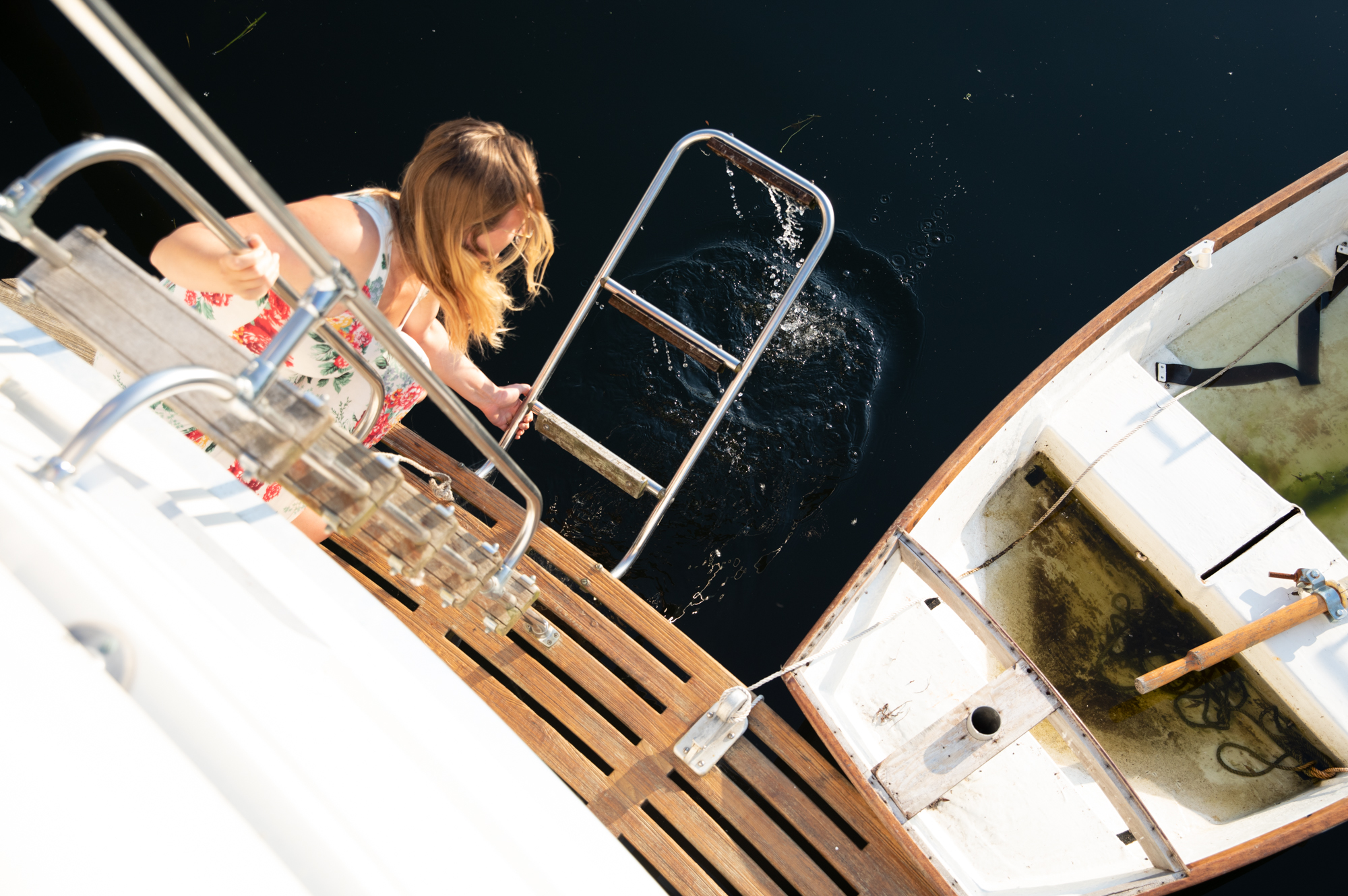 “Sia and I started dating, and after I mentioned my desire to get into boating, we began looking for a small craft. We happened upon a 21-foot bowrider on Kijiji that was listed as free. Luigi, the 88-year-old owner in Gilford, on Lake Simcoe, had sailed the boat for more than 40 years, and he wanted a young couple to enjoy it. We drove to Gilford and picked it up.

“Sia and I didn’t have any experience with boats, and the bowrider came with a few issues. Sia is a certified engineer and has a problem-solving mind, so we fixed up the boat together. It had a large crack, which we patched, and we also worked on the engine because the boat hadn’t been used for four years. 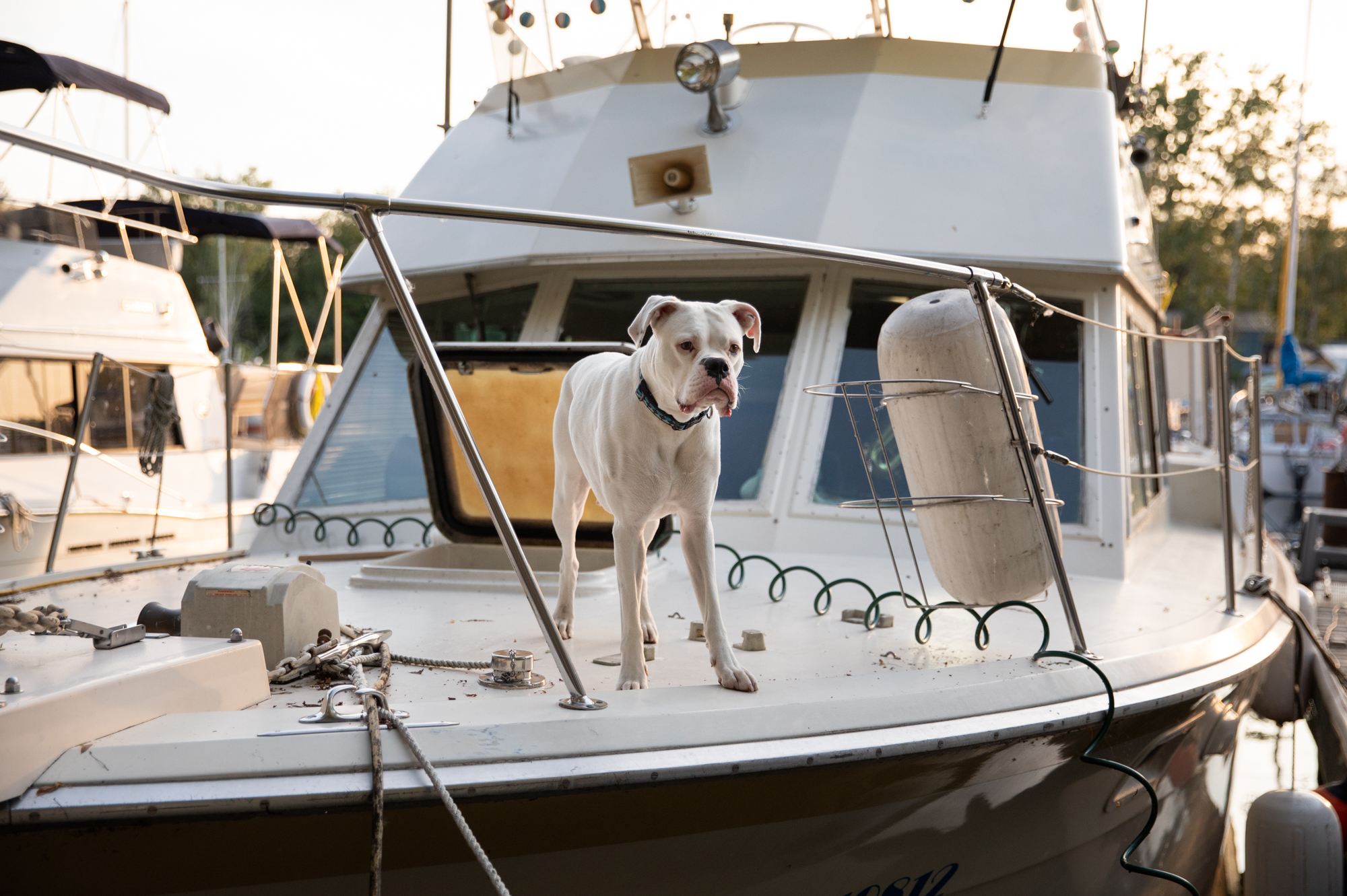 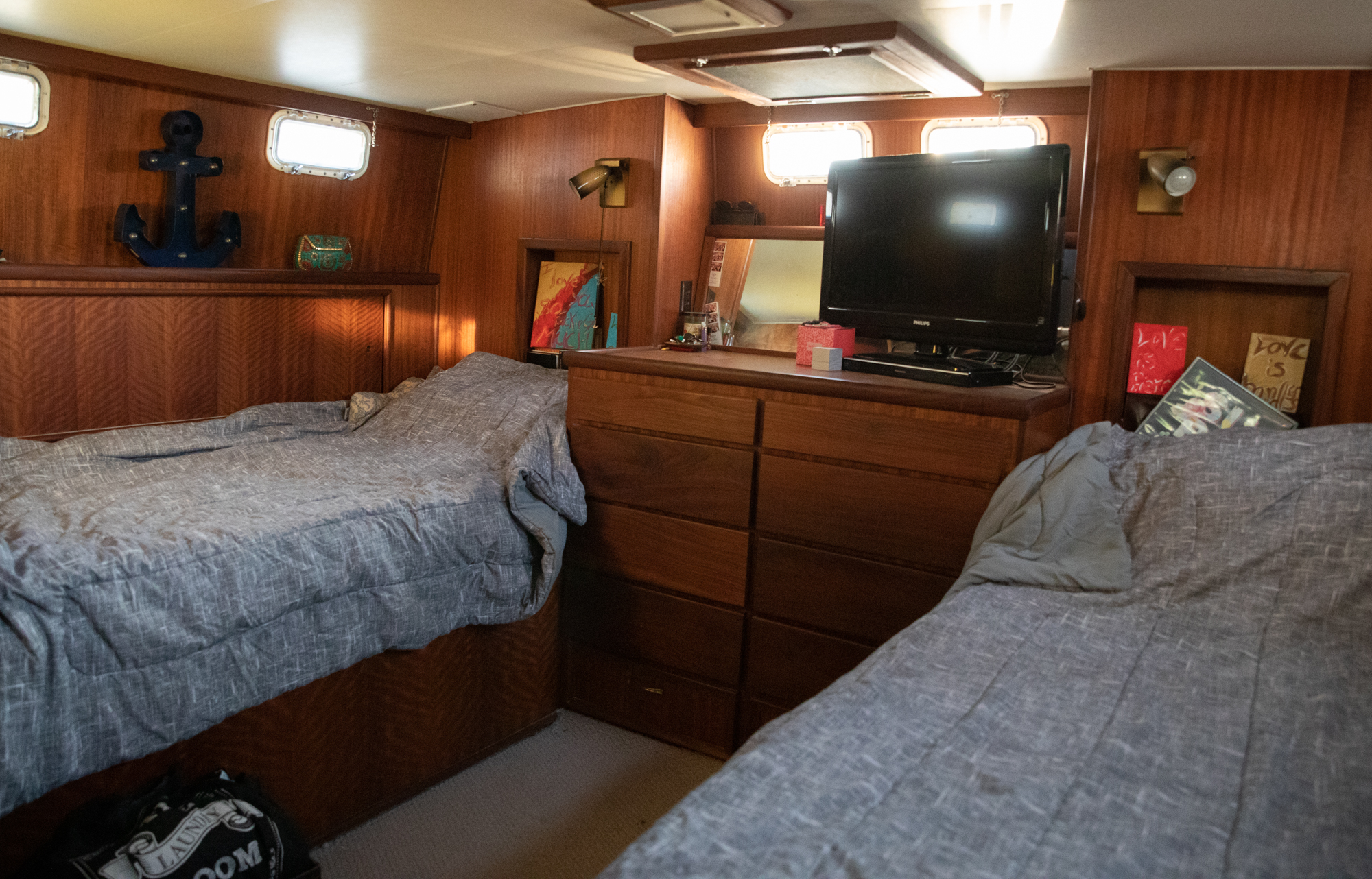 “We decided to store it near Bradford—which is upriver from Lake Simcoe—where Sia has family, and we got our boating licences online. While dropping it off, we made friends in the boating community who suggested a one-night stay in a rented boat owned by a local marina. Up until that point, we were just interested in going out on the water for a couple hours on weekends but that was when we fell in love with the boat-living lifestyle. We were rocked to sleep that night by the gentle waves, and when we woke up the next morning, we were surrounded by nature and the water was glittery.

“By that point, I had moved in with Sia, and we started looking for a bigger boat—one that we could sleep in overnight from time to time. In February 2019, we found Waldo on Kijiji. The seller was up in Penetanguishene on Georgian Bay, so we drove up on a winter weekend to see it. It’s a 1973 motor yacht with lots of miles on it, and there were some problems with the electrical, plumbing and engine as well as a broken air conditioner, but we got a great deal on it, and we bought it on the spot. 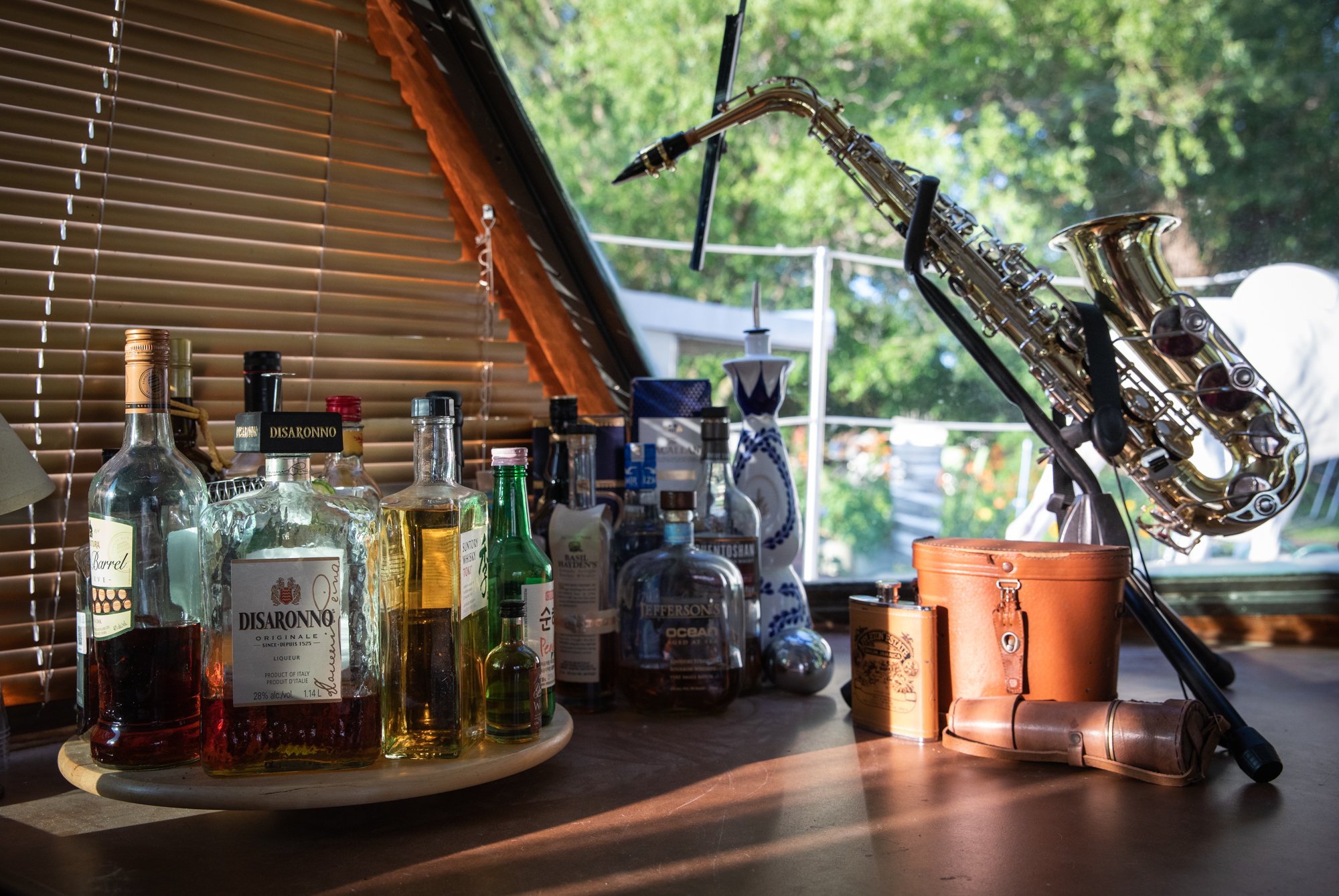 “In the summer of 2019, we sublet Sia’s apartment, drove Waldo up to the marina in Bradford and moved aboard. Sia would take the GO train downtown during the week and I’d commute to the airport.

“Living on the boat was amazing. It was like having our very own mobile cottage. And it’s double the size of our Parkdale apartment. There are two bedrooms and two bathrooms. In the galley, we have a full-sized fridge, three burners on our stove top, and even a rotisserie in the oven. It does have some quirks, like two single beds instead of a queen in the primary bedroom. But the interior is all mahogany, and it is incredibly well-built. You couldn’t get that for $1,100 a month in Toronto—there’s no chance. 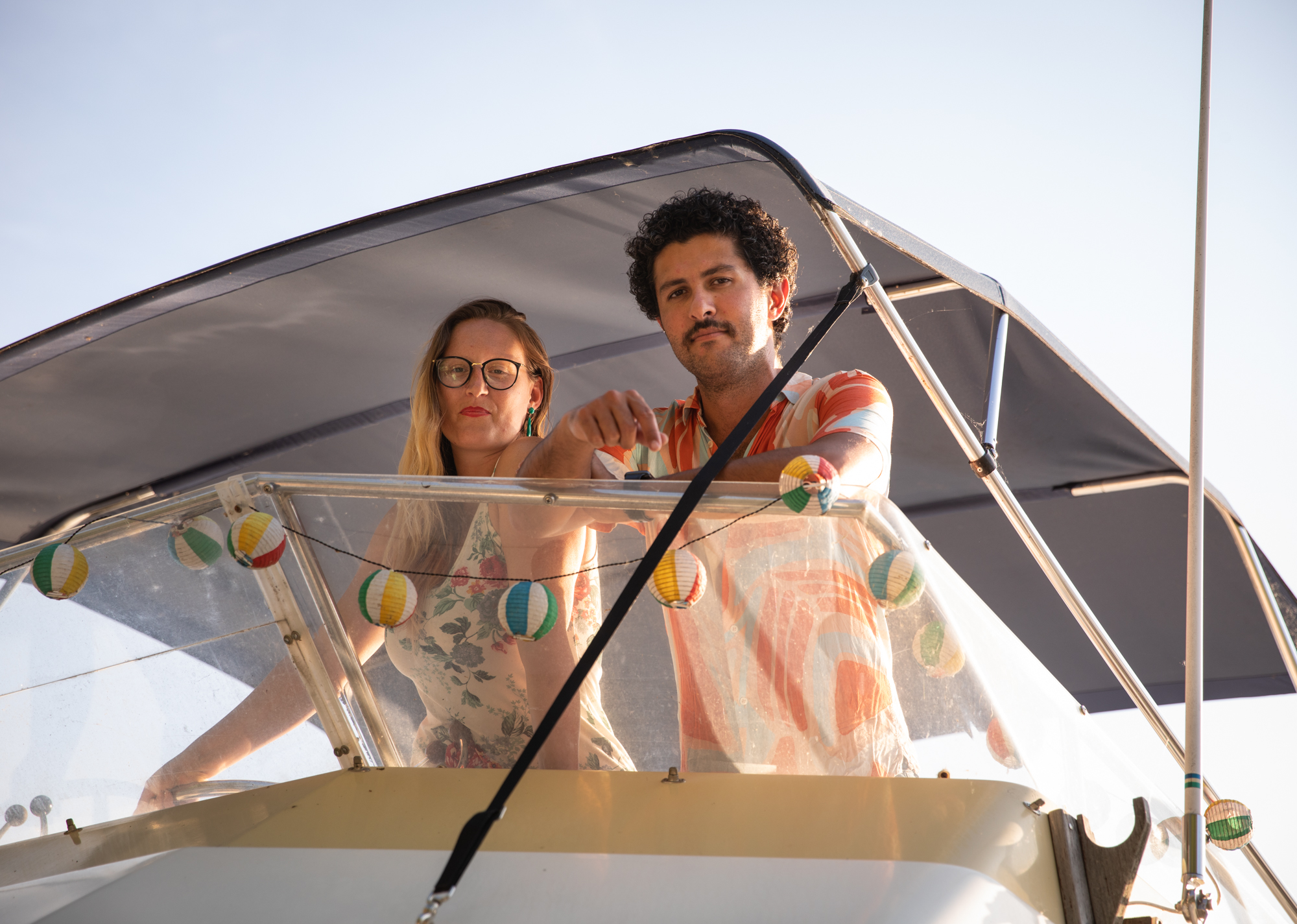 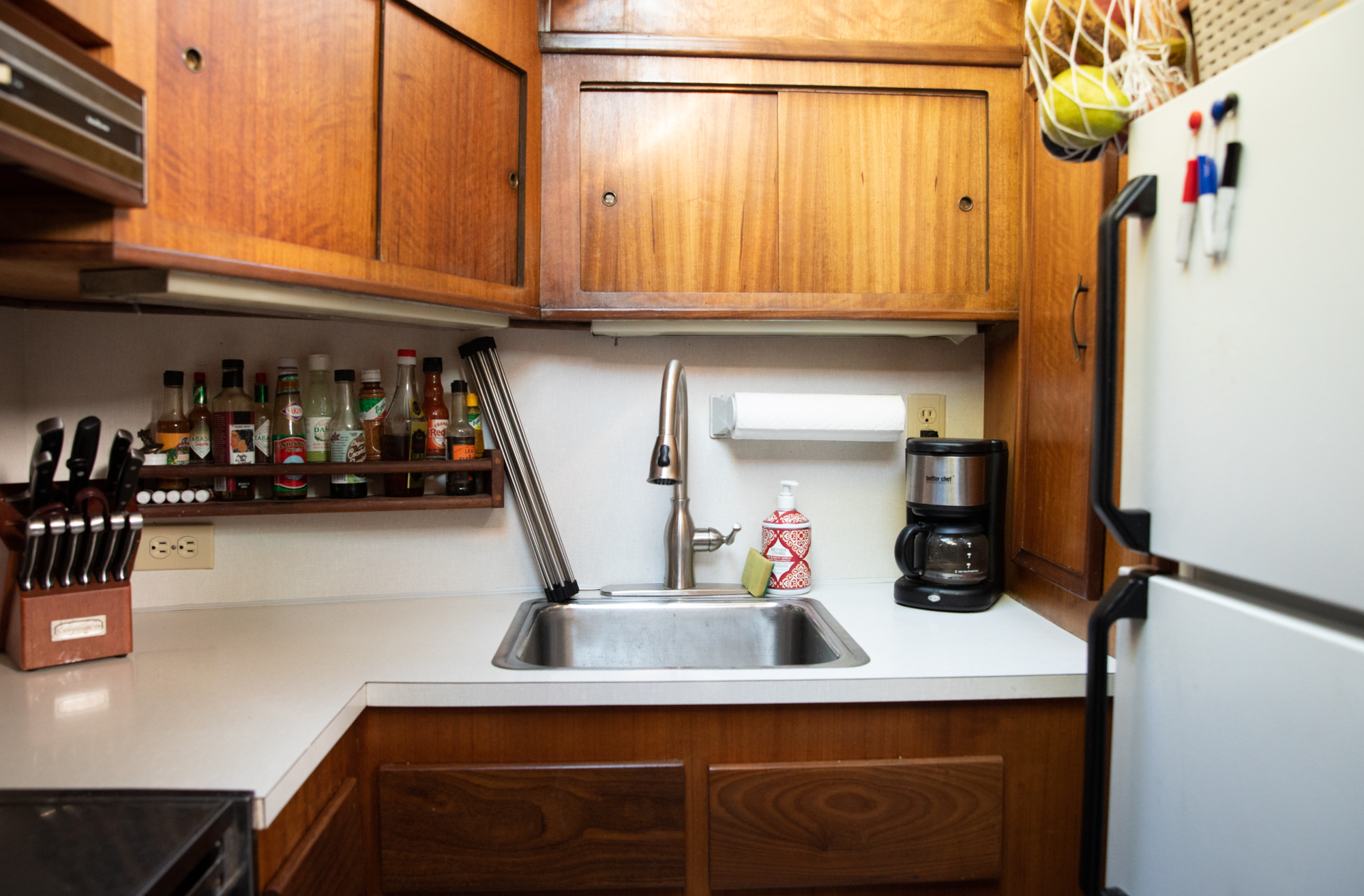 “Our boat isn’t set up for winter yet, so in the fall of 2019, we moved back to our Parkdale apartment. In the colder months, there isn’t a big difference between being in an apartment and being on a boat, because you’re still confined within a small space, and on a boat, you’re closer to the elements.

“After the pandemic hit, we decided to move the boat closer to us in Toronto. At the time, I was furloughed as a flight attendant and Sia was working from home, and we wanted to bring it down to the Islands to move into the boat for May, but we had to wait for the locks to open. In June 2020, we made our trip down to spend our first summer at the Toronto Island Marina. We sublet the apartment again, and it took us 12 days to navigate through the 41 locks between Lake Simcoe and Lake Ontario. 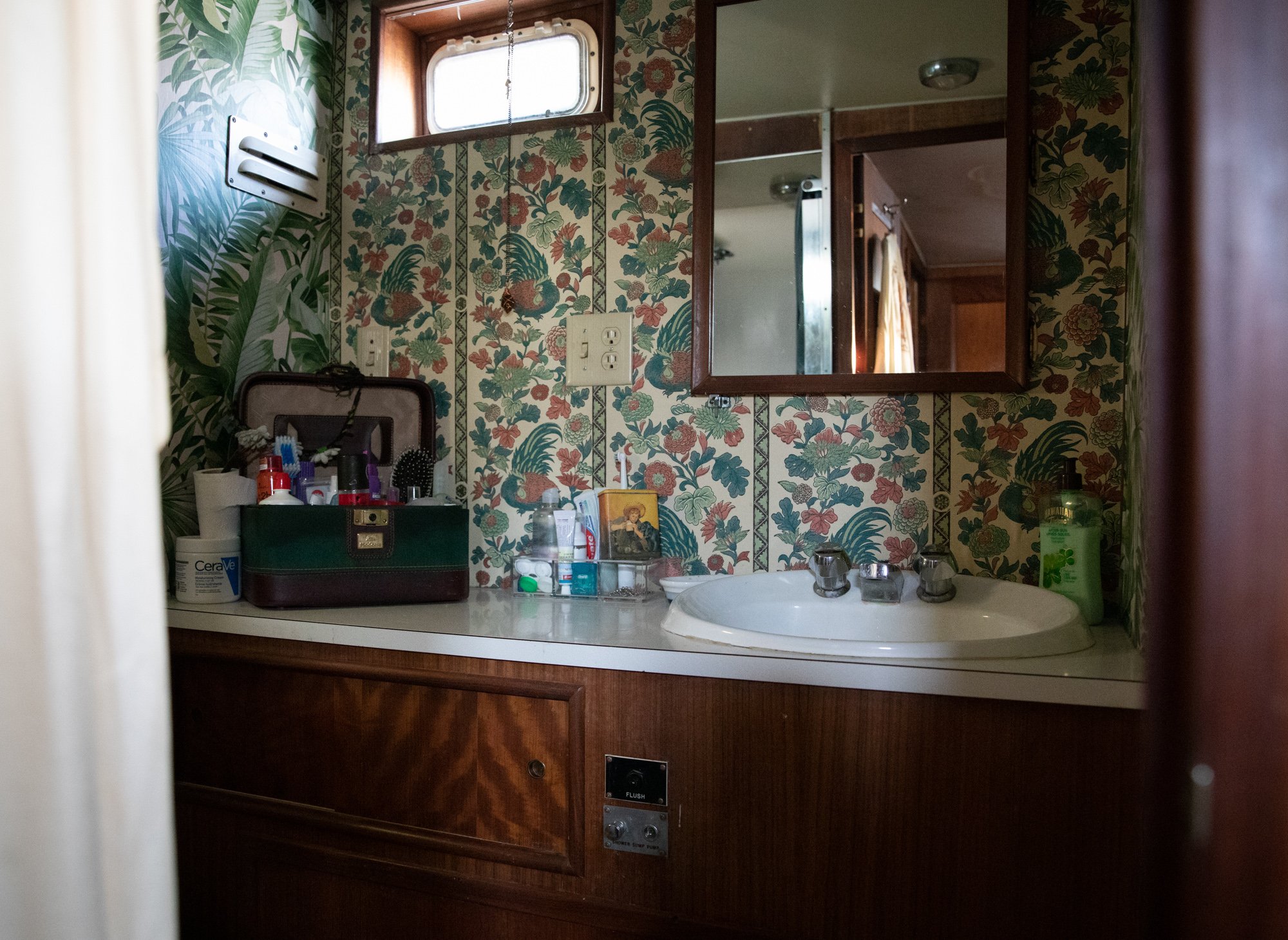 “When we first arrived on the Islands, the ferries were still on their pandemic pause, so it was eerie, but so great to have most of the Islands to ourselves. I spent the summer indulging in the simple pleasures of life: picking wild berries, going for a swim every morning and pondering the next step in my career.

“Last October, I started a new job as a recruiter, and in May, we moved back into the boat. Now, Sia and I are both working from the boat. We have pretty good Wi-Fi, and we pay a premium to have a spot close to land, so we created a little area to relax in and for our boxer, Sedna, to run around. 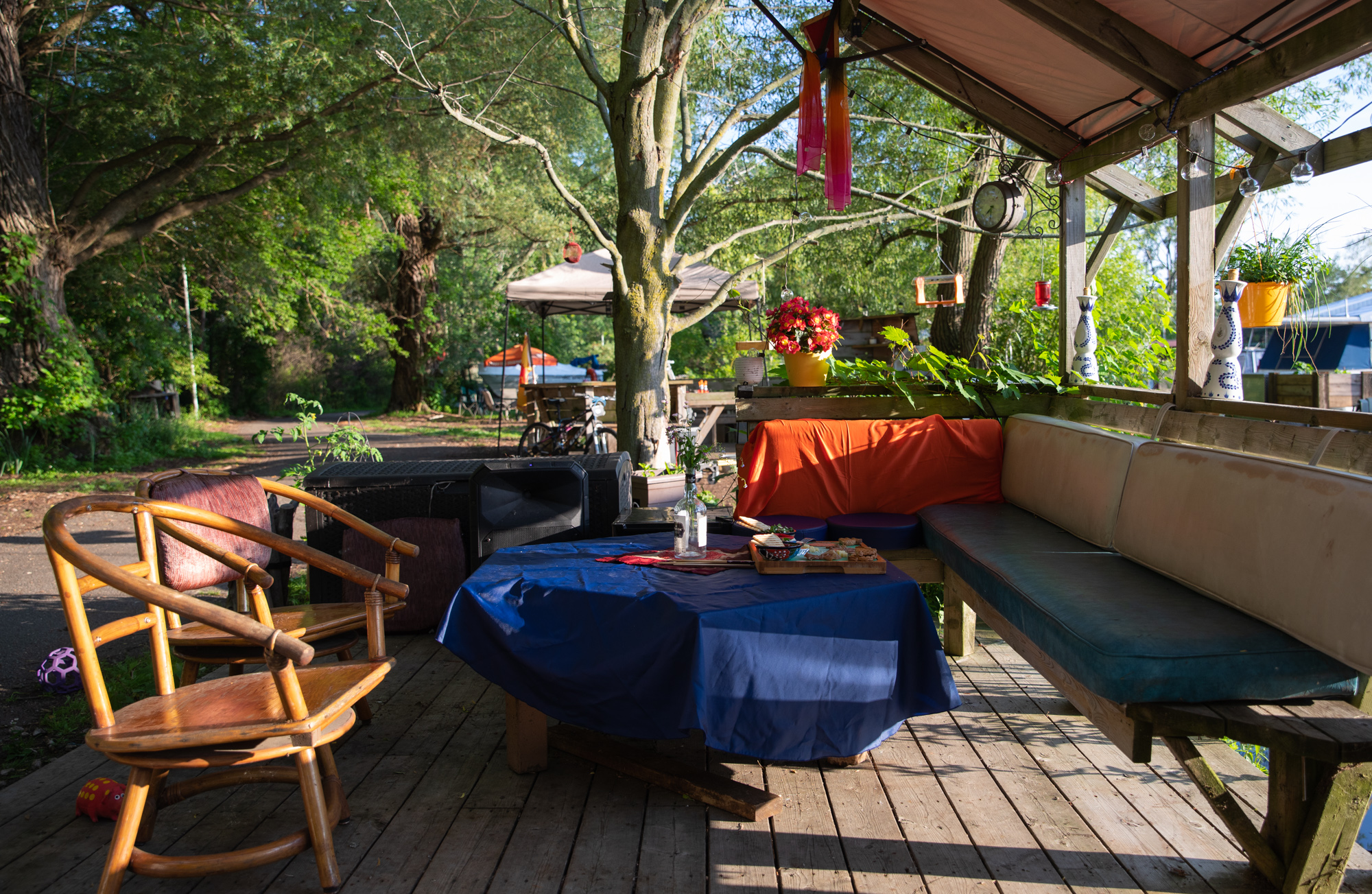 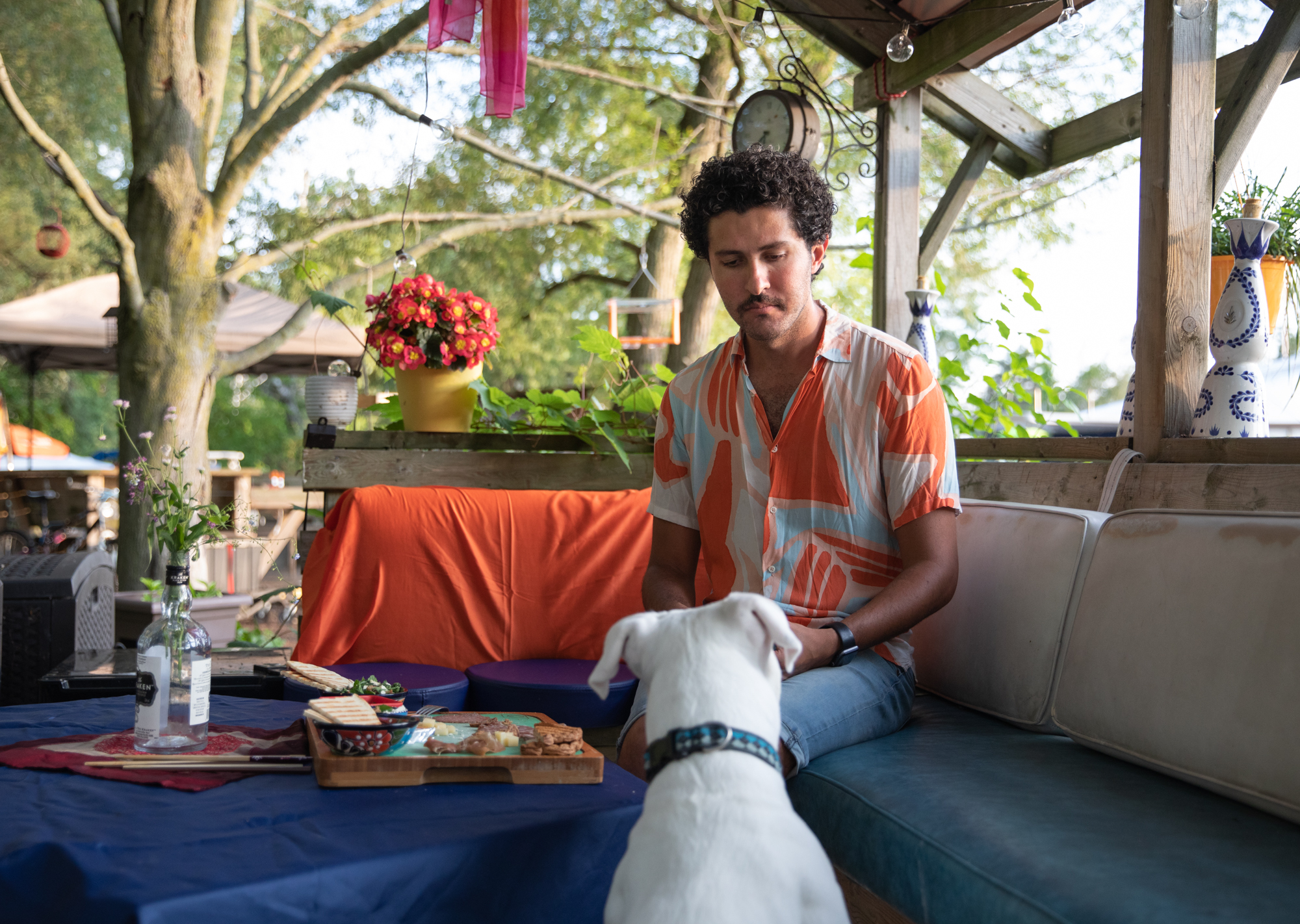 “This is paradise. People pay millions to buy a cottage in Muskoka or charter a yacht on the French Riviera, but the Toronto Islands have so much to offer. I can’t believe how many species of bird I’ve found here, and there’s so much nature to explore, and we’re still so close to downtown Toronto.

“Every summer, the moment we leave our apartment and come here, our stress levels plummet. Our workloads and all the other variables are still the same. The only thing that changes is the environment. We typically do a big grocery run every two weeks. We catch the marina tender to the mainland, grab our car from the nearby parking lot and hit up Costco in the Stockyards, and do an LCBO run at the same time. 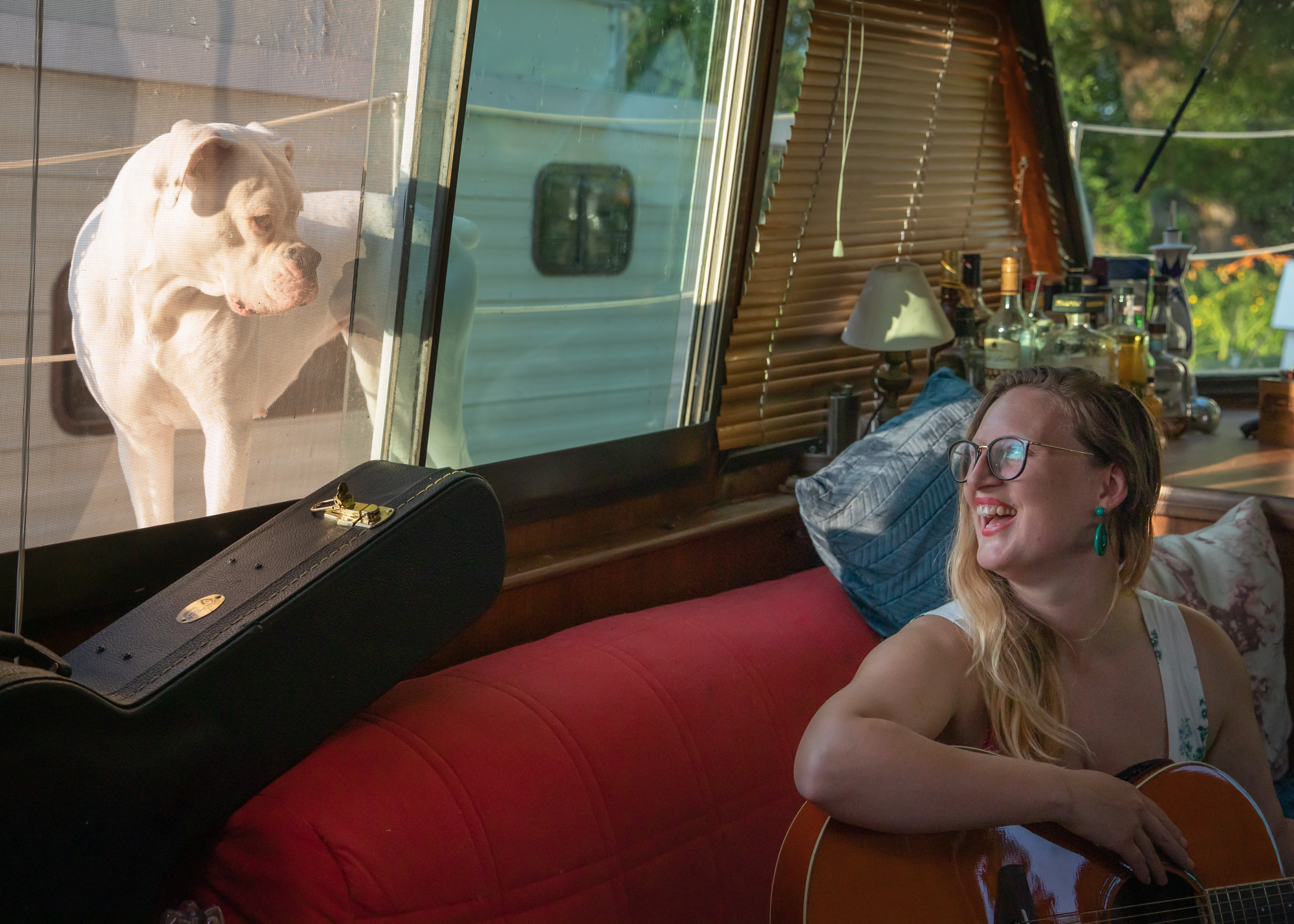 “If we could be on a boat in a warmer place that doesn’t freeze in the winter, then we would live on a boat year-round in a heartbeat. We’re not interested in buying a property in the city. Instead, we’re looking around for a sailboat that is large enough to make a comfortable life aboard as well as capable of ocean crossing. With a powerboat, you’re limited to the amount of fuel you can carry, but with a sailboat, the range is less constrained.

“We’re hoping to head out on a big trip in the next five to seven years. We’d love to get out to the Caribbean and the Panama Canal, then cross the Atlantic to Portugal, Spain and Turkey. After that, we’ll keep going and visit places in Asia and Fiji.”