Rituals: Mohamad Fakih wakes up at 4:30 a.m. “Everyone says it’s unhealthy, but I’m wired that way”

Rituals: Mohamad Fakih wakes up at 4:30 a.m. “Everyone says it’s unhealthy, but I’m wired that way”

Mohamad Fakih is a hustler. In 2006, having recently emigrated from Lebanon, he bought a fledgling shawarma restaurant in Mississauga and transformed it into Paramount Fine Foods, the fastest-growing Middle Eastern restaurant chain in North America. There are now 76 Paramount franchises worldwide, with more plans for growth. But while Fakih is well known around the GTA for his business acumen, he’s perhaps more notable for his philanthropy and social activism. In 2019, he won $2.5 million in a lawsuit against former Mississauga mayoral candidate Kevin Johnston, who made “hateful Islamaphobic” comments toward Fakih. Later that year, when a popular Syrian restaurant on Queen West closed down after facing racist threats, Fakih publicly offered his support, and the restaurant reopened a few days later. Most recently, after the Iranian military shot down a plane carrying at least 63 Canadians, Fakih started Canada Strong, a campaign to raise $1.5 million for the victims’ families. So far, the initiative has generated nearly $850,000, which will be matched by the Canadian government.

Fakih is also a family man with a wife and three sons. It takes a lot of energy to run a business and support a family—here’s how Fakih makes it happen:

My alarm goes off between 4:30 a.m. and 6 a.m., so I get about four and a half hours of sleep. That might not seem like a lot, but I get up and I’m excited to get the day going. My trainer says, “What kind of energy do you have, man?” Everyone says it’s unhealthy, but I’m wired that way. People think you should sleep for eight hours a day? That’s basically a third of my life.

Most mornings, I pray and listen to the Quran in the car. It calms me, grounds me and reminds me of my childhood, when I used to wake up and pray with my dad. Sure, I miss a prayer here and there, but in life, it’s your intentions that count. So, even if I miss a prayer, I know that I was at least trying to do something good. After all, Islam is a religion of forgiveness.

I have something simple: coffee, a boiled or fried egg, maybe a bowl of fruit. I hit Life Time Athletic club in Mississauga for an hour. I have a gym set up at home, but I like to go out and see my trainer.

Then I head to the Paramount office, right off the 427 in Etobicoke, and block off the first 30 minutes for a briefing with my office manager. After that, I’ll walk desk to desk and have a chat with the employees, from the executives to the junior staff. That’s what I like doing. I schedule meetings with people when I need to, but I don’t want people to feel like they have to make an appointment to see me. A lot of the time, my top executive, Caroline, joins me. We pop into people’s offices, make a joke and talk about things: “What did you do yesterday? How’s your family?” It’s really important to ask your employees about what’s happening in their home life. 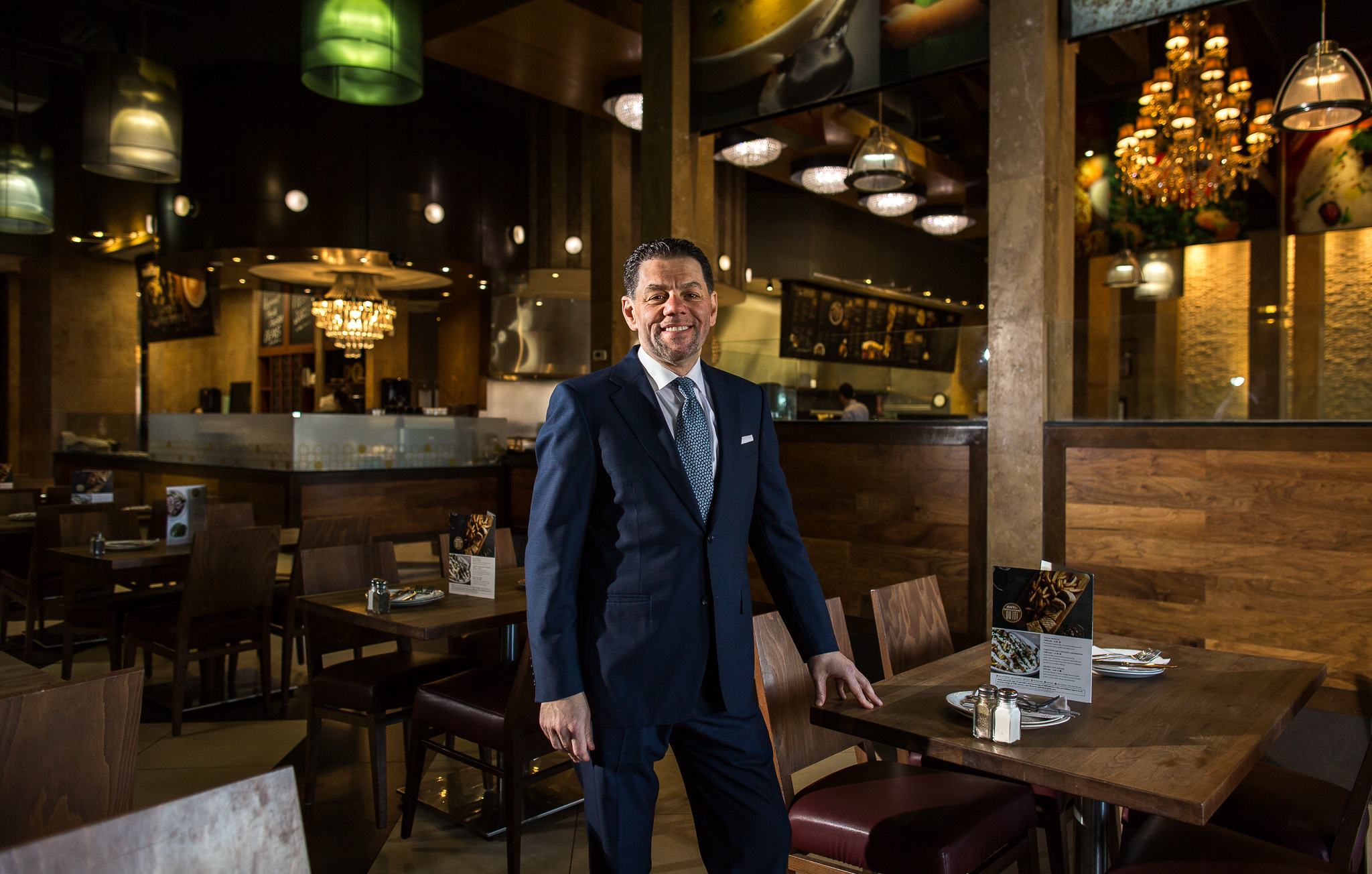 Before lunch, I’ll take a few meetings. Here’s the thing—I don’t sit down during meetings. After three minutes of sitting, I get up and walk around the table. It gets everyone dizzy, the poor people! Even when I was a kid, I could never sit. My mother, Nabiha, used to say, “Mohamad has exams, so he’ll probably need a day or two to rest, since his feet and knees are going to hurt.” Her friends would say, “What does that have to do with exams?” It’s because I would be up all night studying and walking around.

I’ll go for lunch, either at Paramount, La Castille or Via Allegro, depending on where my afternoon meetings are. When I’m eating at Paramount, I can’t act like a customer, because I love going from table to table and talking to everyone. Sometimes, I go behind the counter with the staff, high-five them and jump in to help if they’re too busy.

I’m getting older and have to worry about my weight, so I’ve been cutting carbohydrates for the past four months. For lunch, I usually eat shawarma on salad, steak frites, a chicken caesar salad or lentil soup. I love lentil soup. I try to avoid french fries and croutons these days, since those have a lot of carbs.

Twice a week, I’ll have lunch with one of the executives. I believe that breaking bread with your team is very important. God forbid they feel like there are borders between you. Sharing a meal, talking about your family and putting your agenda aside, it all brings the team closer. People say the customer is always right, the customer comes first—no. Your employees come first. Take care of them, take care of your culture and they’ll take care of your customers.

I usually work on business related to Paramount or my philanthropy. I’m wired to believe that the more you give, the more you make. Growing up, in our house in Lebanon, there was a little shoebox that said “sadaqah,” which means voluntary giving, in the Muslim religion. My mother would give us five dollars for school and tell us to put 20 cents in the box before we left the house. That money would go to someone in the community who needed it at the end of the month. My mother would tell us that when you do a good thing for your community, God would send great things to your life. 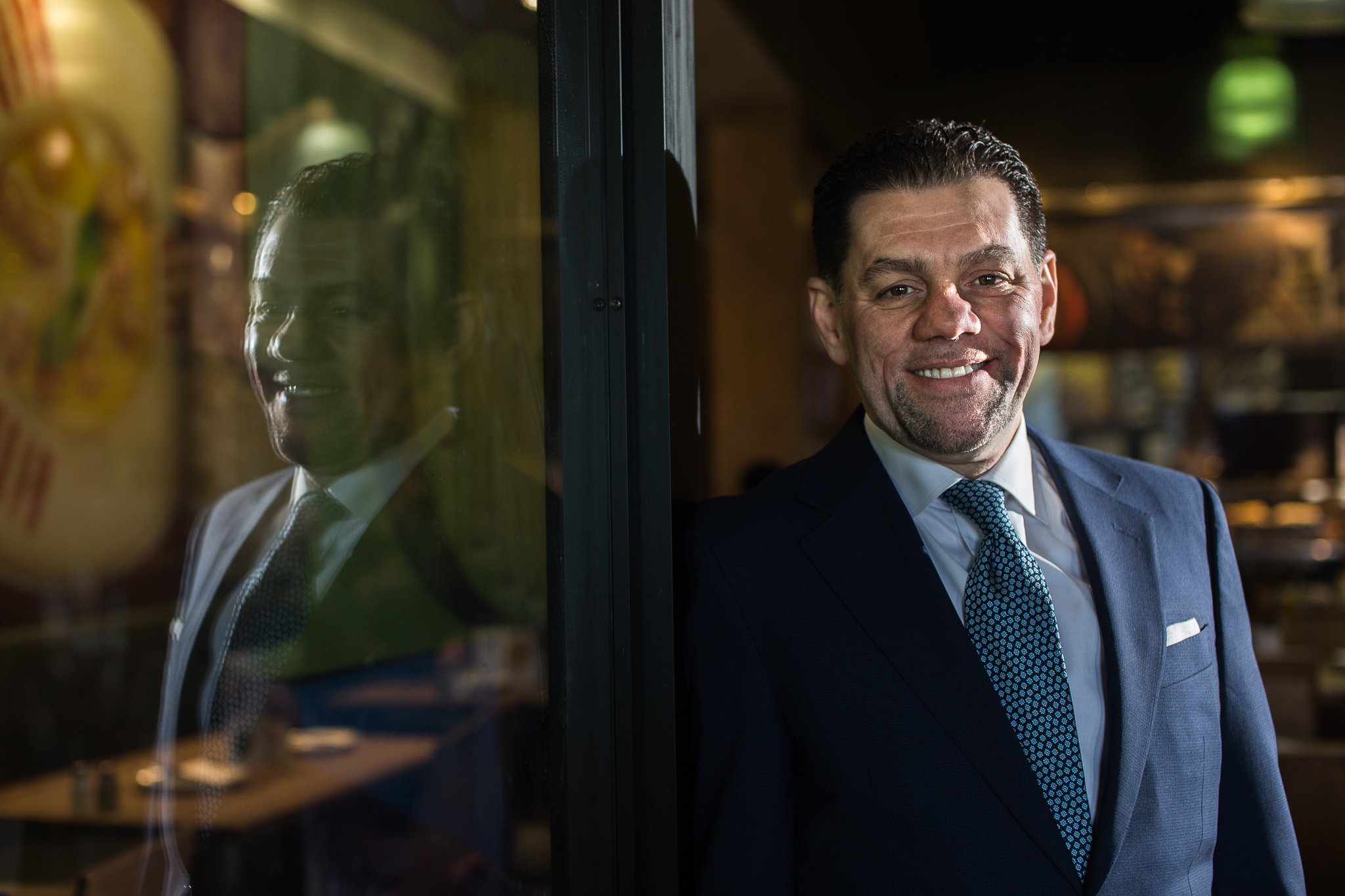 We didn’t have much, but during the Lebanese Civil War, my mother always used to say, “We shop for two families.” Two loaves of bread, two bottles of milk, and so on. Because there was always a refugee family from another area of Lebanon that needed help. She would drop by and give them their share of the groceries. Giving to others was part of our everyday lives. So I never look at people for what they own, or how big or rich they are. It’s about how they make other people feel. I made a commitment a long time ago: there’s no amount of money that can change my ethics, my principles and what I believe in. I’ll never forget where I came from, just a poor guy who lived in a basement apartment at Jane and Wilson.

I often have dinner meetings or speaking engagements, but if I don’t, I go home after work. My wife and I cook a couple of meals that we think are special. I do a steak al pepe verde, which I learned how to make when I studied in Italy. My 15-year-old son, Emad, makes amazing chocolate chip cookies, but we stay close by so he doesn’t burn the kitchen down. We do a lot of Middle Eastern food, like lamb and freekeh, or grape leaves. You put the stuffed leaves over some lamb chops and you cook them together.

After dinner, we’ll watch something. It’s often basketball or hockey, but not much of the news. My wife thinks we get enough news during the day. So, we spend time together and do something relaxing in the evening. My wife laughs and says that I don’t watch TV, I read it. That’s because if the TV is on when I’m alone in the room, it’s subtitles on, volume down. If I’m stressed, I like hugging my five-year-old son, Adam. Listening to his stories, hearing how much he misses me and telling him how much I love him, it just takes me to another world.

I do listen to podcasts and audiobooks, but usually on flights, or on an evening when the kids are out for a movie and my wife has some work she’s doing. I really like the author Danny Myers. Right now, I’m reading The Five Dysfunctions of a Team by Patrick Lencioni. I read a lot of books about business culture, like The Culture Connection. And I like to read about crazy people who think they can change the world.

At the end of the day, I just shut down. It’s like someone turns me off with a remote controller. My wife says, “You barely remember to close the garage sometimes.” But then, even before the sun starts showing a little bit of light, I’m up and running. Honestly, I feel like I’m not doing enough. I could take on five more jobs. I look at people like my mentor, Hazel McCallion, who was the mayor of Mississauga for almost 40 years. She’s 98 and does so much, and I feel like I’m not good enough in comparison. I want to do more, and I just don’t think there’s enough time.”