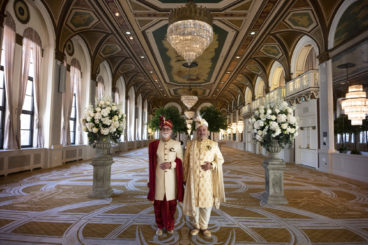 Inside a same-sex Hindu-Anglican celebration at the Royal York

Carl Wolter, a social worker, and Suneel Khanna, a PR professional, met in Palm Springs in 2018 and planned a multicultural celebration in Toronto for this June. When Covid-19 halted their plans, they decided to host an intimate—yet equally grand—affair at the Royal York.

Carl: Suneel and I met in April 2018, after I had been living in Palm Springs for about five years, consulting with various non-profit agencies in the area. I was born in LA and lived in Southern California most of my life. Suneel first messaged me on Growlr, a social media app for gay guys.

Suneel: I was born and raised in the GTA. When we met, though, I was in the middle of a career sabbatical, travelling and volunteering internationally. One night while I was browsing the app, I noticed a handsome bearded gentleman with a really cute smile. As we chatted, I became impressed with his intelligent questions and gentle spirit. Plus, he had a rockin’ bod. 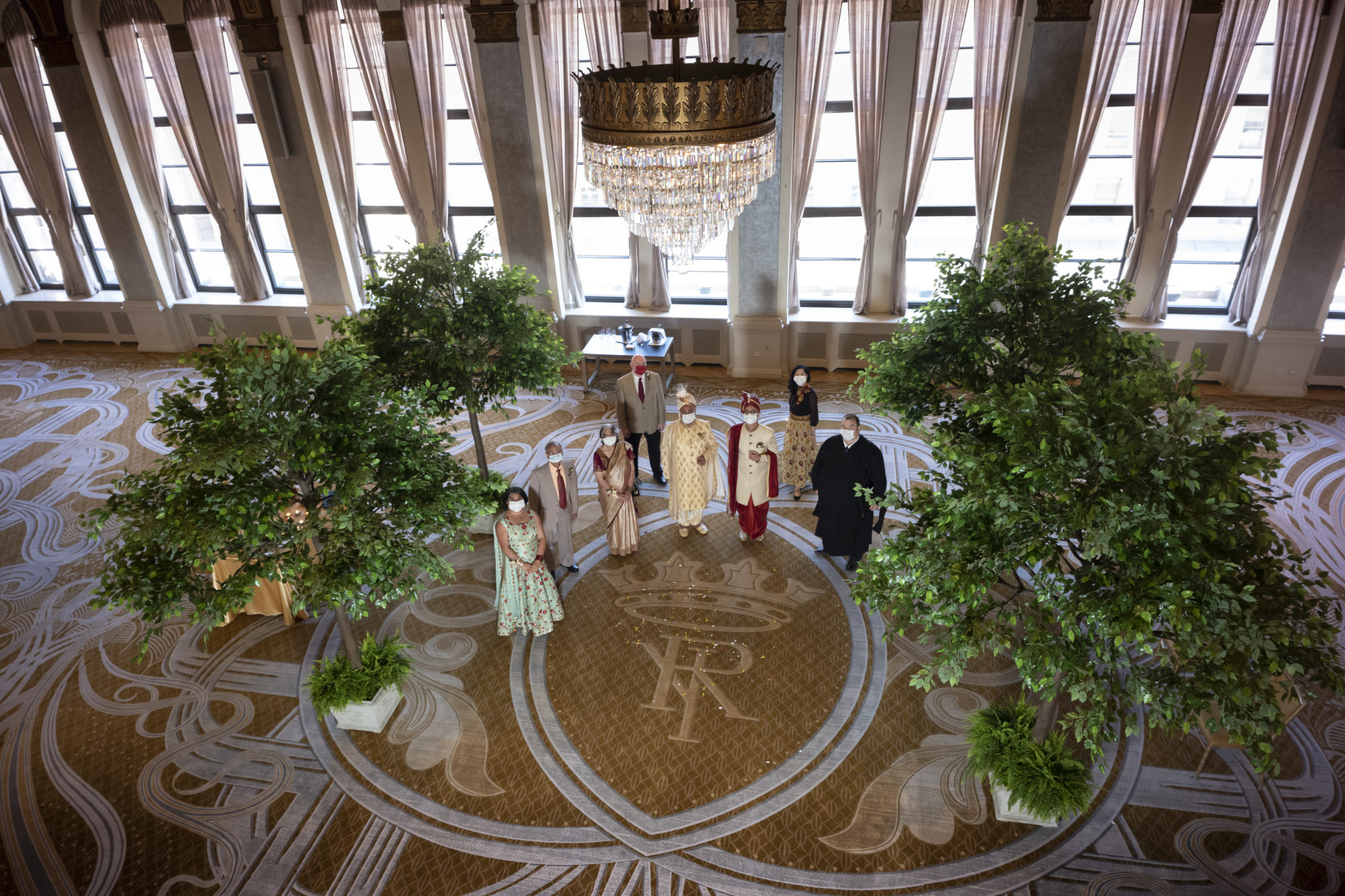 Carl: I was only living a few blocks from where he was staying, and a few days later, we met up at his Airbnb. He was even more handsome and articulate in person, and I was captivated. During the four weeks he was in Palm Springs, we hung out nearly every evening. We started out as friends with benefits, but it grew into something more. Suneel went back to Toronto for a few months, and that August, he invited me up for a week. That’s when our relationship became official.

Suneel: There was a lot of travel back and forth. At one point we even spent a week together in Playa del Carmen. After he visited Toronto, I continued on with my travels to Europe and South Asia. Then, in December 2018 I stayed with Carl in Palm Springs for four months, returning to Toronto in April to start looking for full-time work again. And in June 2019, Carl moved to Toronto.

Carl: We did 14 months of long distance altogether. 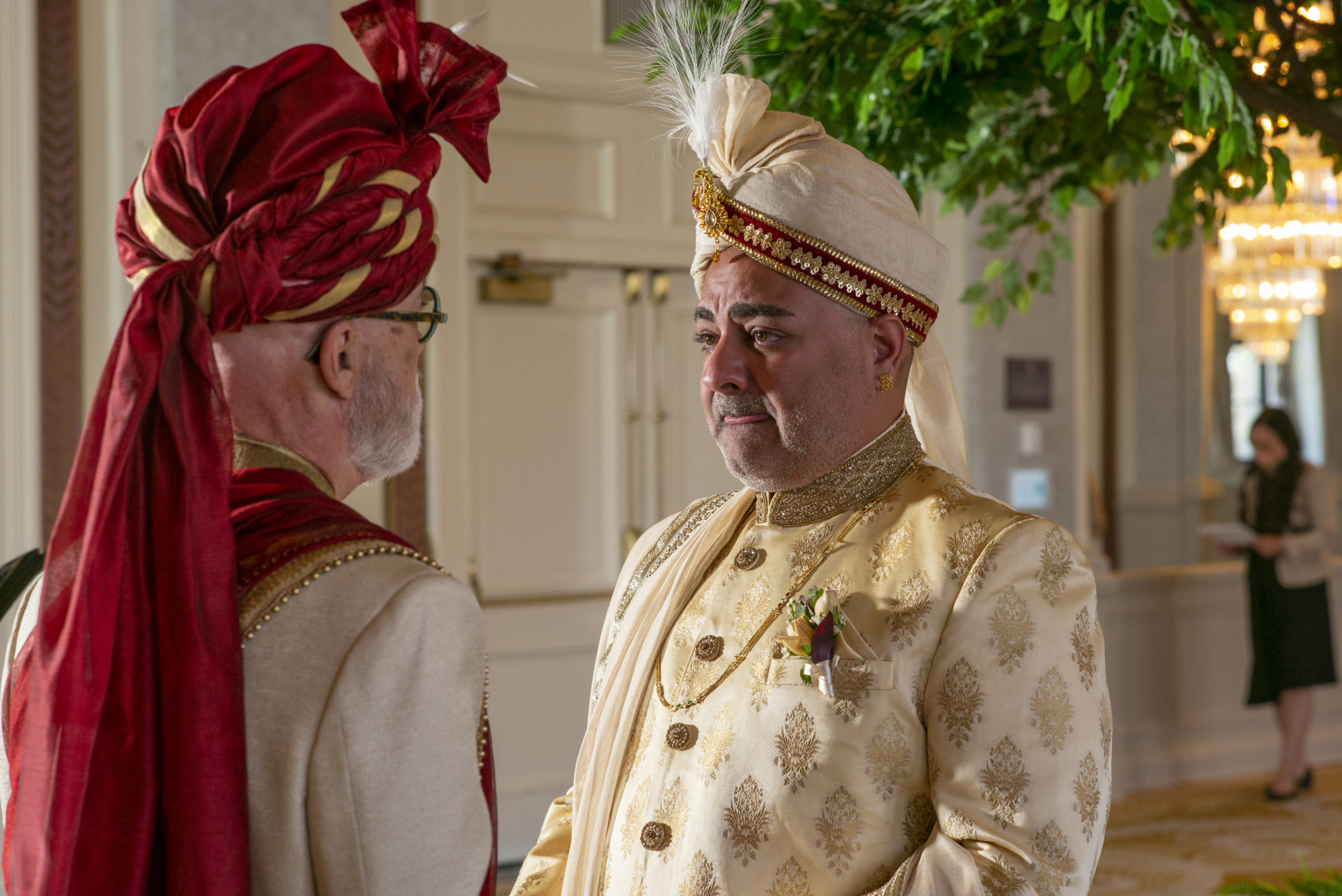 Suneel: In December 2019, during a trip to Palm Springs, we got engaged at a New Year’s Eve party. We had a tight-knit community of friends there. Half an hour before the new year, I recruited our closest friends to, one by one, read out our relationship story to Carl. They had no idea about the plan, so when they read what was in the envelope, it was their first time seeing it. I don’t think there was a dry eye in the house. They started around 11:50 p.m., and it ended with a proposal just before the countdown to midnight. Carl said yes, and everyone passed around champagne and toasted us.

Carl: Our wedding was planned for Toronto in June 2020. We booked the Church of the Redeemer at Bloor and Avenue, and we were going to have our reception at the Chef’s House on King East. The guest list included 80 people from places like New Delhi, Switzerland and Palm Springs.

Suneel: We wanted to integrate both of our cultural traditions and also convey a political message. For example, the number seven is important in Indian weddings, so we were going to light seven candles in the church, and before each lighting we were going to do a reading related to gay rights. We wanted to talk about Trump scaling back trans rights in the U.S., the decriminalization of gay sex in India and how, for years, the Toronto police didn’t acknowledge the serial murders of South Asian gay men by Bruce McArthur. Then Covid-19 happened.

Carl: We had been meeting with vendors up until the first week of March, and then restrictions hit. We waited a couple weeks, and once we realized things weren’t going to change any time soon, we informed our guests that our ceremony was cancelled. We wanted to give enough notice, especially with so many international guests. 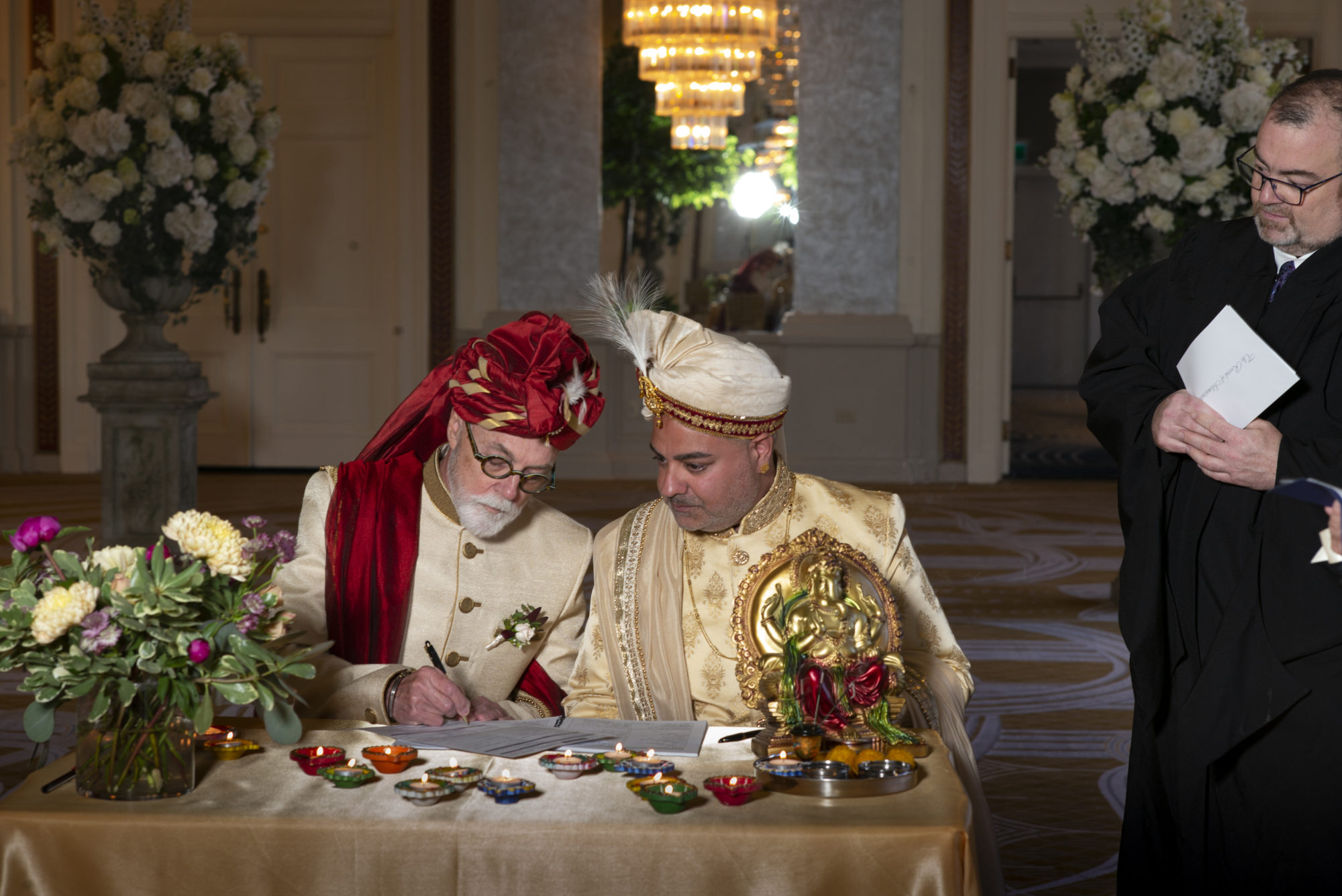 Suneel: Covid-19 also put Carl in a vulnerable position. He’s not a Canadian citizen, so we needed to be married for him to be able to work here. When city hall shut down, we couldn’t get a marriage licence. He also wouldn’t be able to go home to deal with family or medical emergencies because the border was closed. Our whole lives were being put on hold. Then, we found out city hall was taking applications for licence exceptions on their website. Carl pleaded our case in an email, and Toronto issued the licence for us. That was a huge turning point—it was such a relief. On June 2, I picked up the licence.

Carl: Suneel’s sister found out that the Royal York was doing socially distanced weddings. Suneel immediately put on his PR hat, working his network and sending off a flurry of emails to the Fairmont asking if we could do it in a week or two. We ended up being the first couple they hosted in this intimate format, on June 14.

Suneel: At the time of booking, we could only have five people in attendance. But two days before the wedding, restrictions loosened and we were able to host up to 10 people. My immediate family was able to be there. We were worried about my parents, who are in their 80s, but one of our partners at the Fairmont told us they’d escort them directly from their vehicle—which they were allowed to park right at the main entrance—to the ballroom and right back afterward, to minimize contact with others. It would have been heartbreaking if they weren’t able to come. 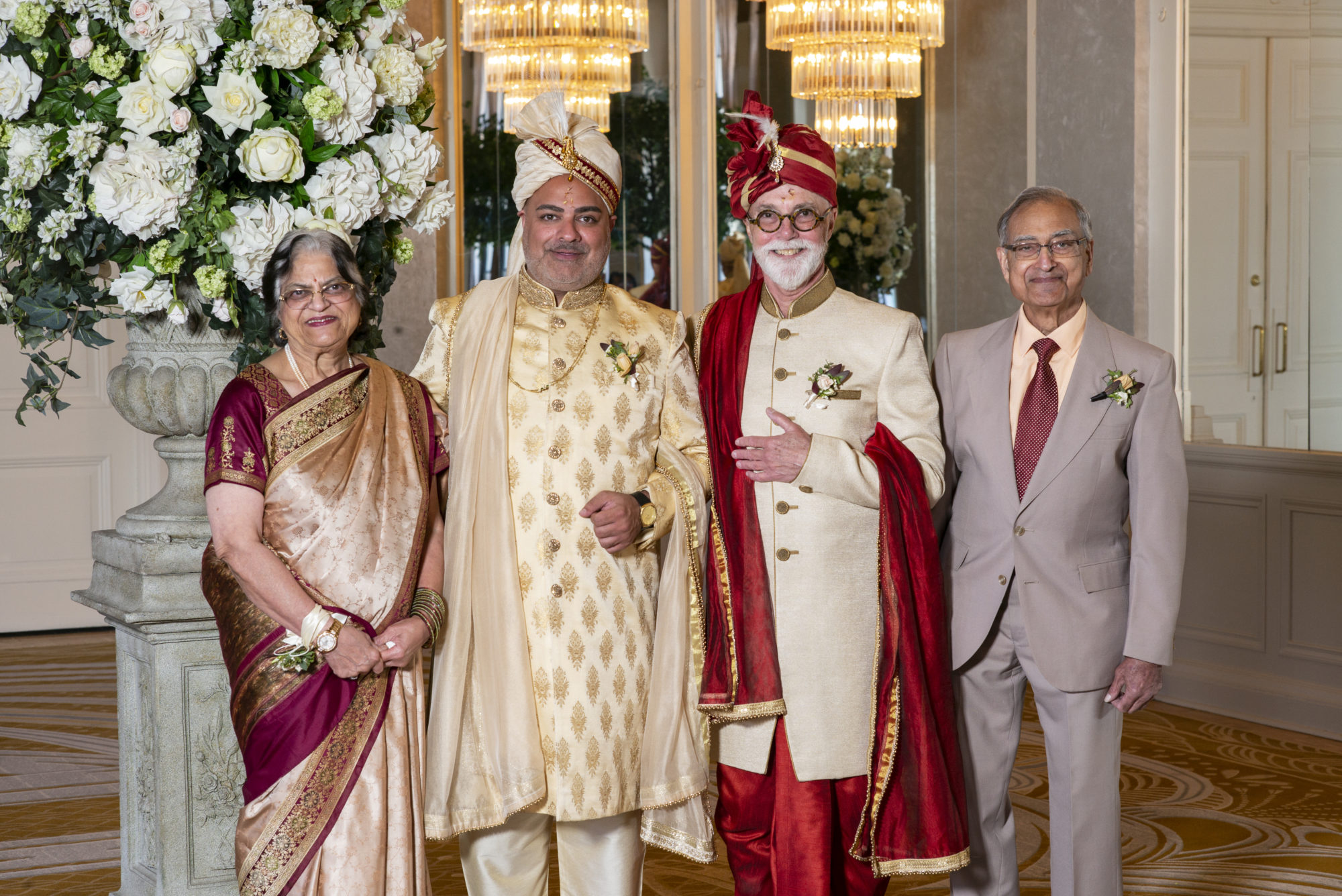 Carl: We had gone for fittings for our groomswear at Ethnic Collections in Etobicoke, and our outfits were tailored in India. Most of them made it to Toronto before shipping was shut down. I spent the two days before the wedding ironing all our fabrics. There was a lot of it! The day of, we had to coordinate everything ourselves. We brought everything to the venue that morning, including diyas (tea lights), our flowers, Indian sweets, champagne and our cake, which was made by one of Suneel’s childhood friends, Monika Singh of Cali’s Creations. Our corsages and boutonnieres were from Quince Flowers in Leslieville.

Suneel: It was meaningful to both of us to be dressed as maharajas in a ballroom that actually has a history of entertaining royalty. We spent three hours getting ready in our Fairmont suite and taking photos. The ceremony itself lasted about an hour. The weather was beautiful. Our photographer, Peter Bregg, used to be the chief photographer at Maclean’s, where we worked together. Peter’s been awarded the Order of Canada, so it was a dream to have him photograph our wedding.

Carl: It was important to us to meld Hindu and Anglican traditions in the ceremony. I read from First Corinthians about love, and Suneel’s father was supposed to read a Hindu peace prayer, but he sang it instead. We were blown away. The acoustics in the ballroom were amazing. Suneel’s family in New Delhi watched over WhatsApp. 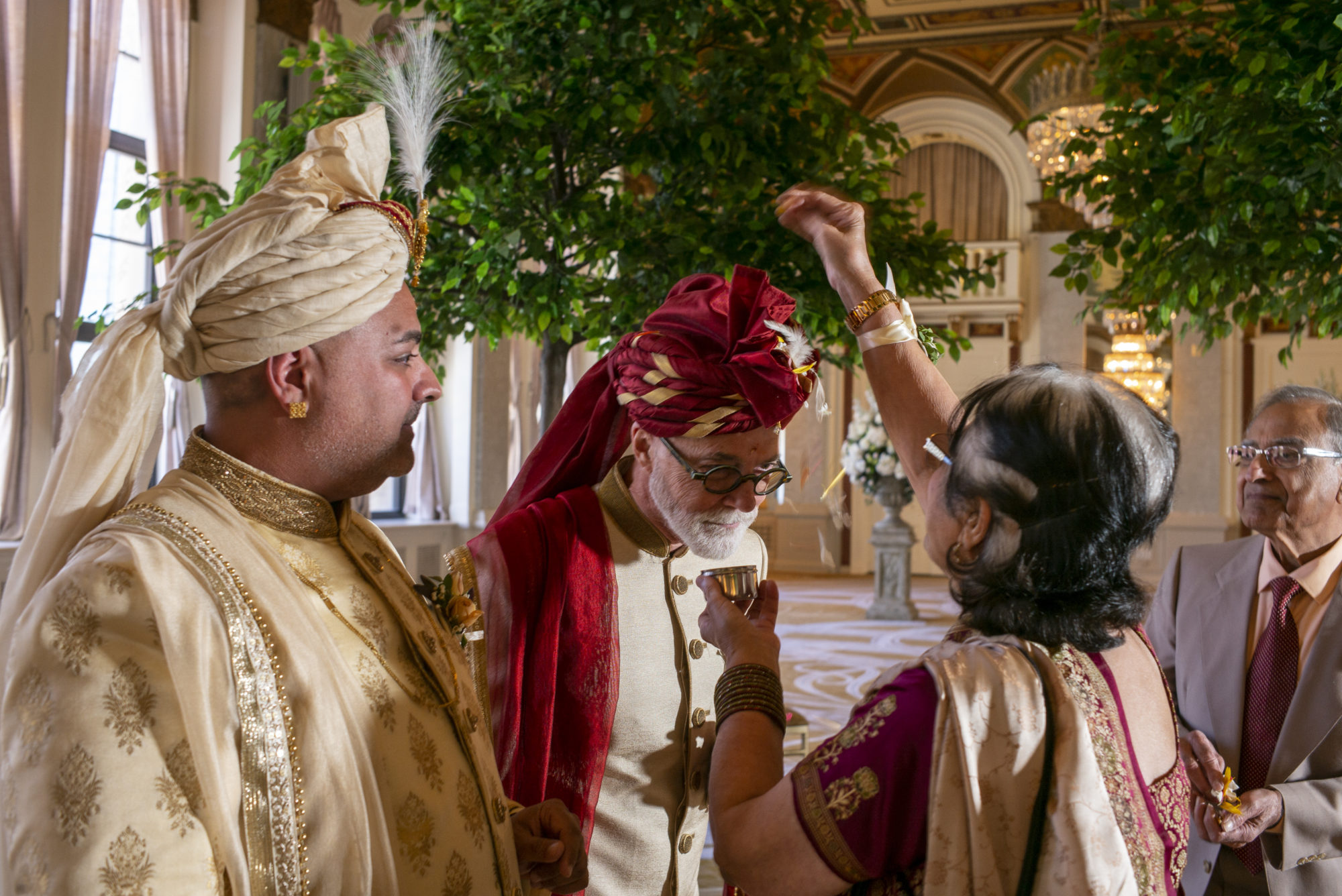 Suneel: There was a statue of Ganesh, the god of prosperity and good luck, on the signing table. We touched my parents’ feet at the beginning of the ceremony to get their blessing. At the end they placed a tikka on our foreheads. Everyone threw flowers on us, and, of course, there was plenty of incense.

Instead of rings, we exchanged karas, stainless steel bracelets that are one of the five symbols of Sikhism. Even though my family is Hindu, I was raised with both Hindu and Sikh influences. We consider the Golden Temple an important place of worship. I bought one of the karas while travelling in India, and had it blessed in the Golden Temple. My father found us a second kara from a Sikh temple in Toronto, and had that one blessed as well.

For Carl, the pandemic brought back some traumatic memories of living through the AIDS crisis, and for me, I never thought gay marriage would be legal in my lifetime. I wrote a first-person essay on the legalization of same-sex marriage for Maclean’s about a year before it was a reality in Canada—the hate mail was over-the-top. On some level, this whole wedding felt like something else we had to fight for. The emotion from the ceremony wasn’t just about our two lives coming together—it was about our entire pasts and a right of passage into our future. It was an emotionally cathartic experience.

One staff member, after congratulating us, told us that seeing two grooms in Indian wedding attire wandering through the hotel was a real moment of hope for her and her colleagues, after months of furlough. We could tell all the staff were relieved to be doing something hopeful and celebratory again. My mom, in Hindi, also said to me at one point, “Today we forgot about Covid.” 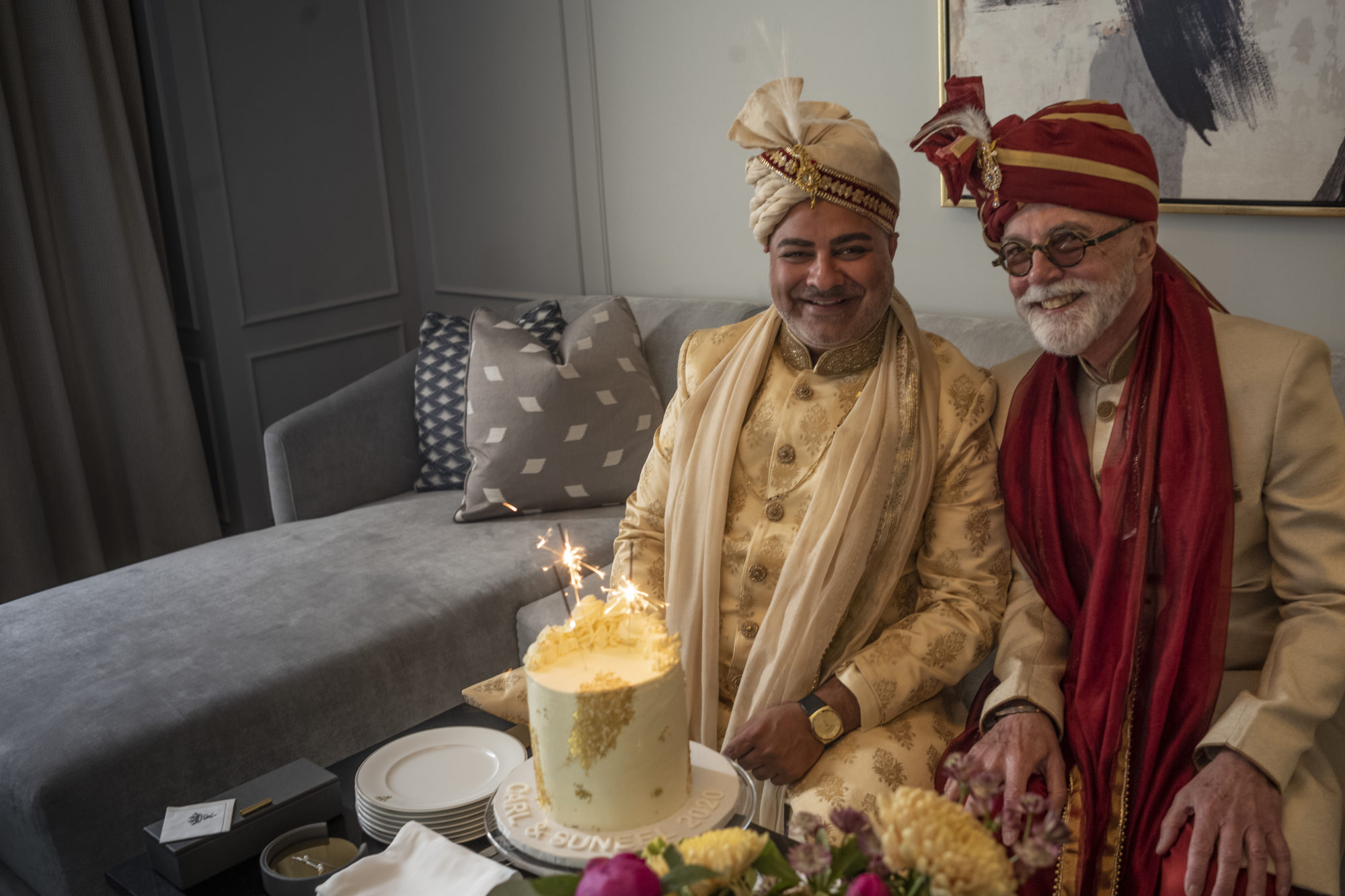 Carl: The fact that we were able to work with restrictions and changing provisions and still pull this off bodes well for our relationship. We can do anything we put our minds to.

Suneel: After the ceremony, we had a mini in-room reception with our best women, my sister Anshu and our friend Linda. My cousins in New Delhi woke up at 3 a.m. and got dressed up to celebrate with us on a Zoom call. We also video chatted with Carl’s sister in California, who was lounging by the pool.

After the sun set and a couple bottles of champagne, we took off our layers of silk and looked out the window of the Fairmont at the CN Tower, and there were two hearts shining up on the base, lit up in Pride colours. Carl looked at me and asked if I had arranged it. I hadn’t, but it was a magical, meaningful moment, and we spent most of the evening in each others’ arms looking up at the iconic Canadian tower that seemed to be sparkling a digital rainbow just for us. 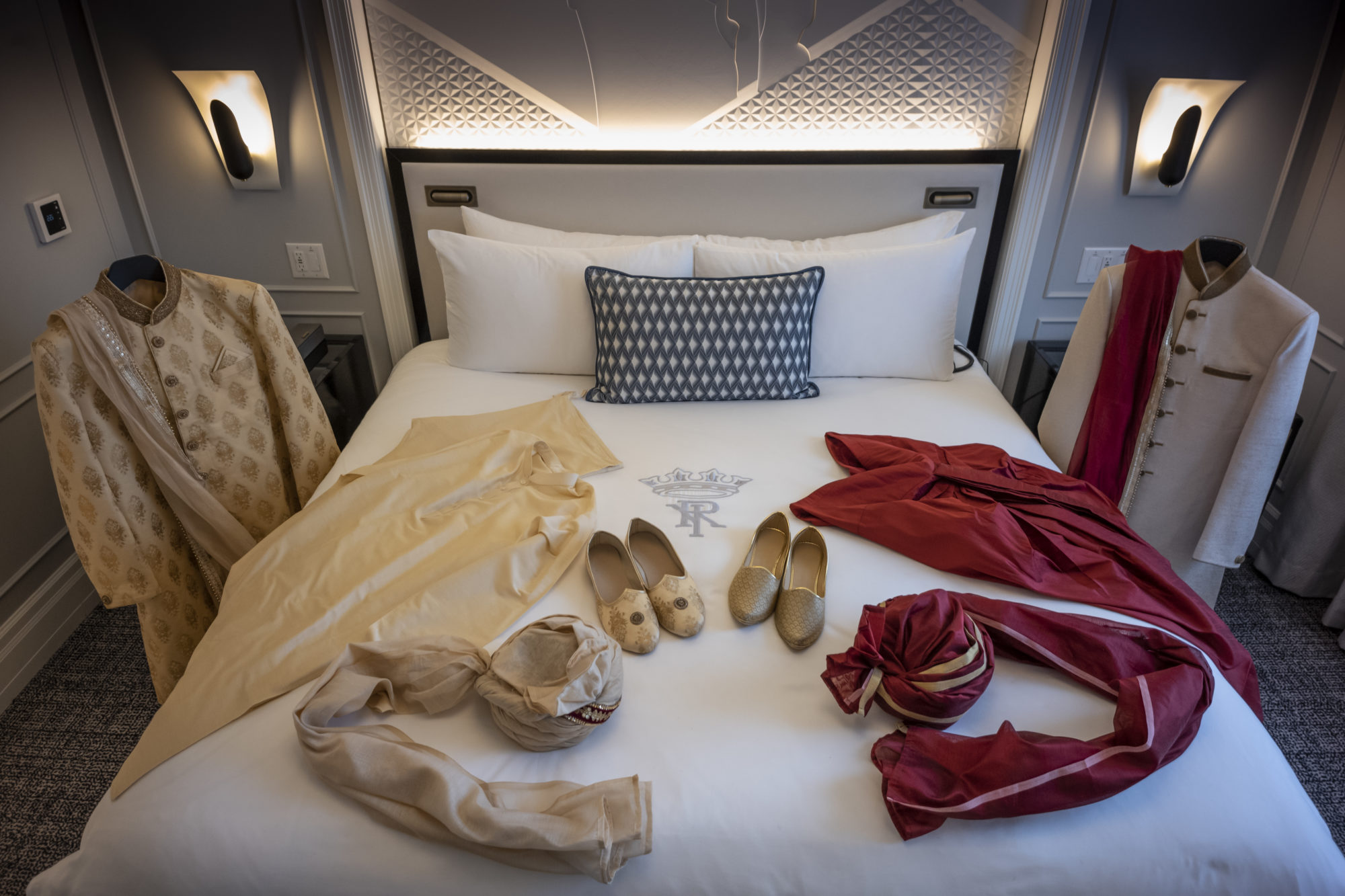 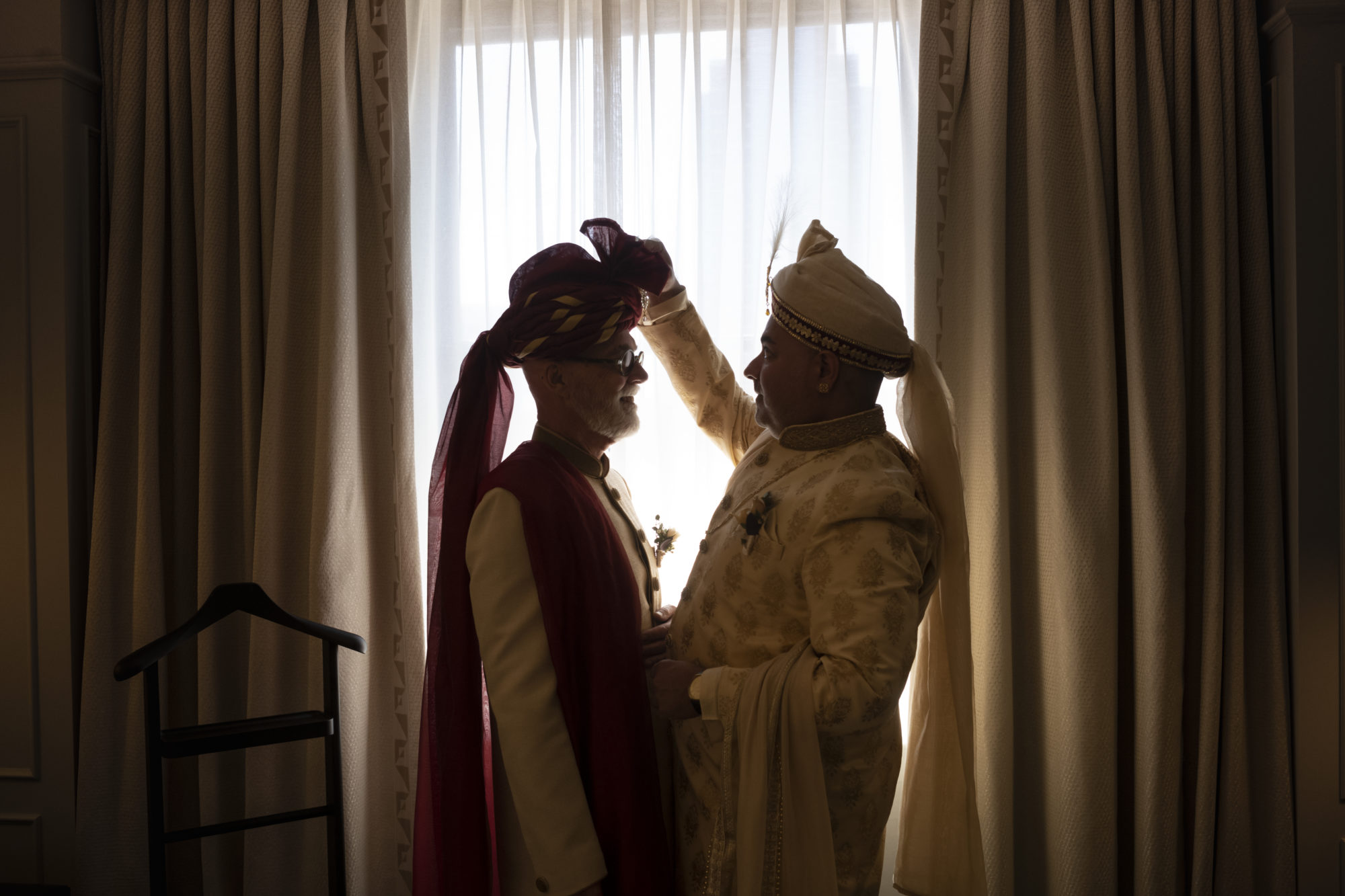 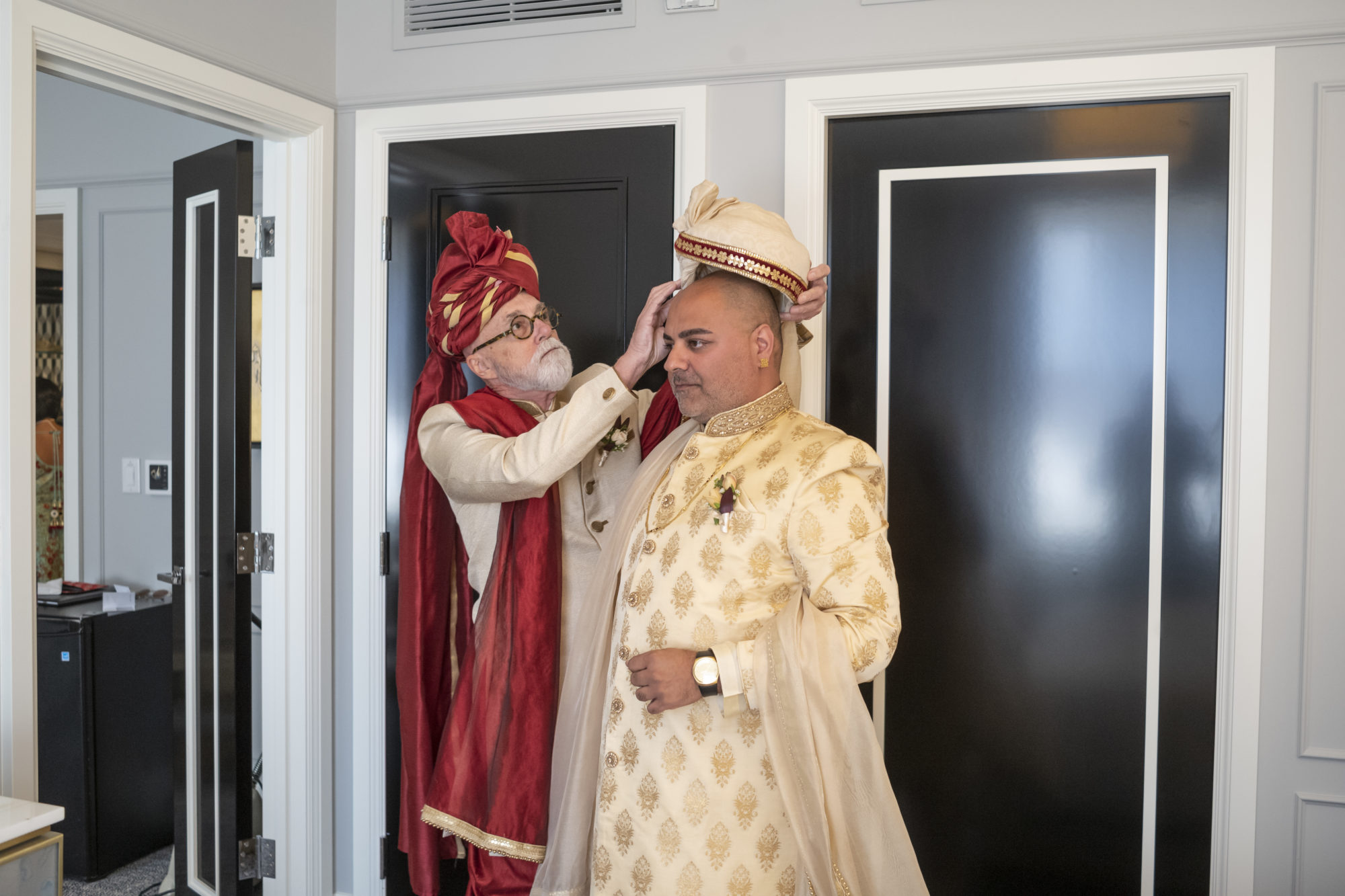 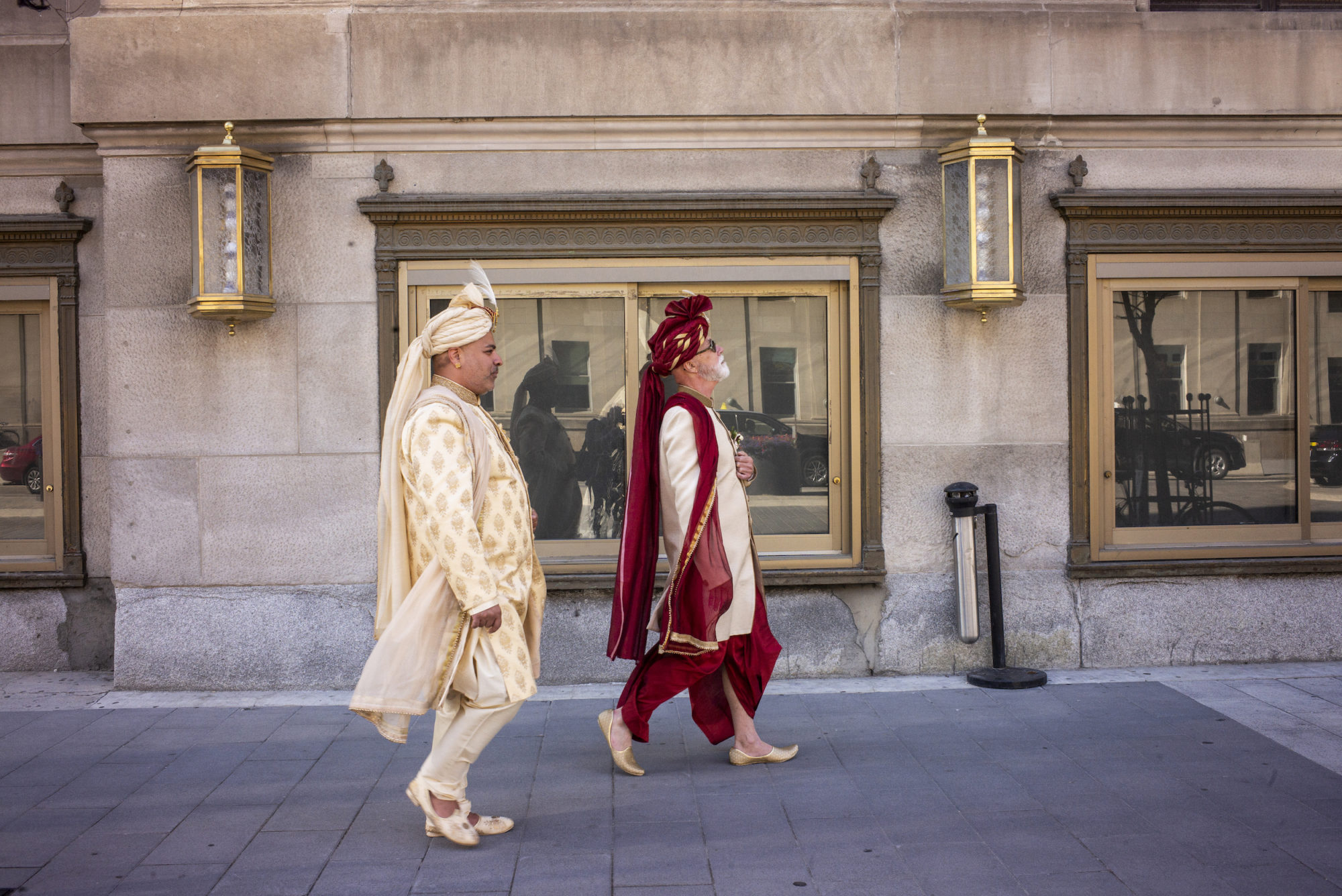 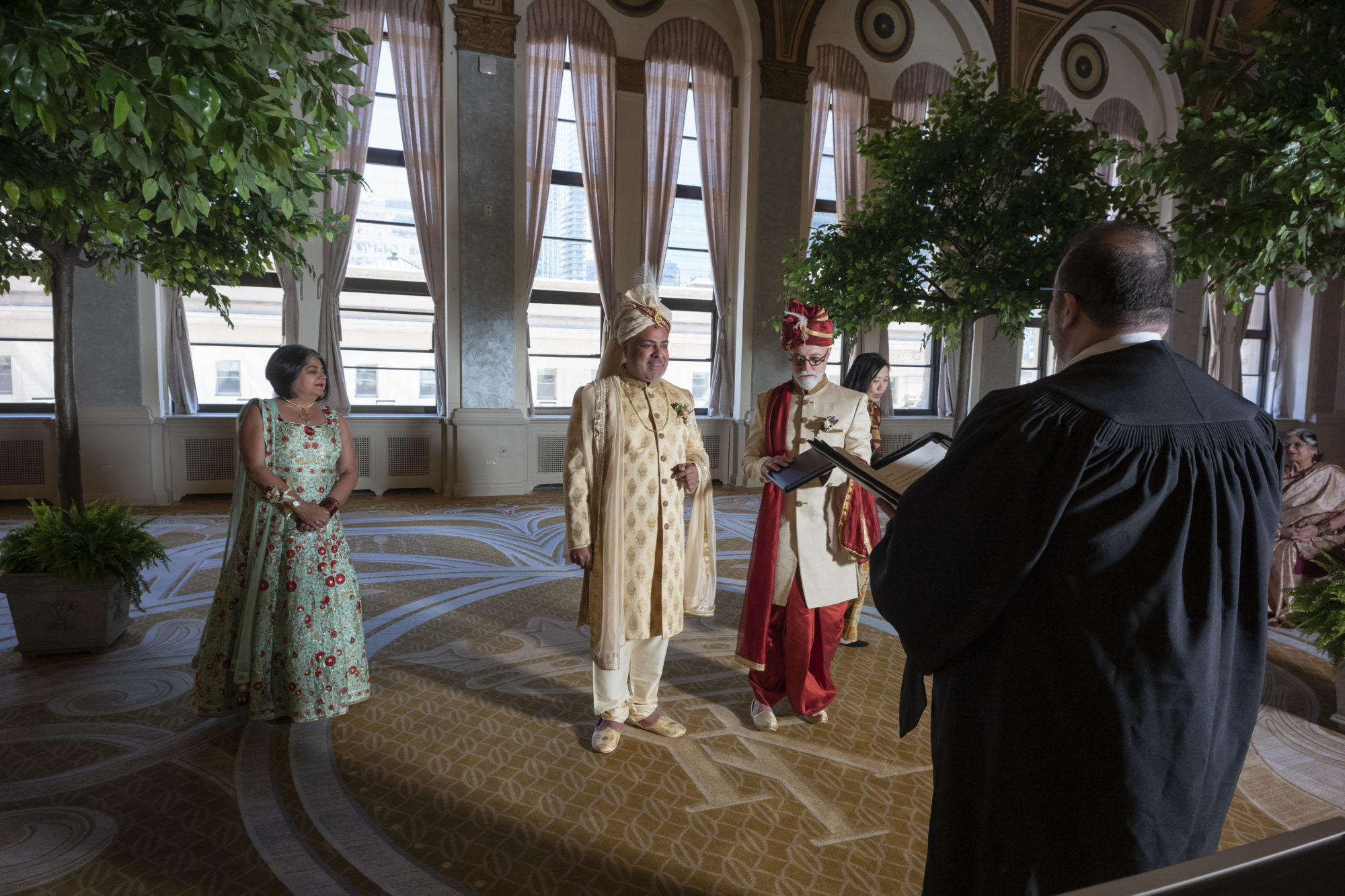 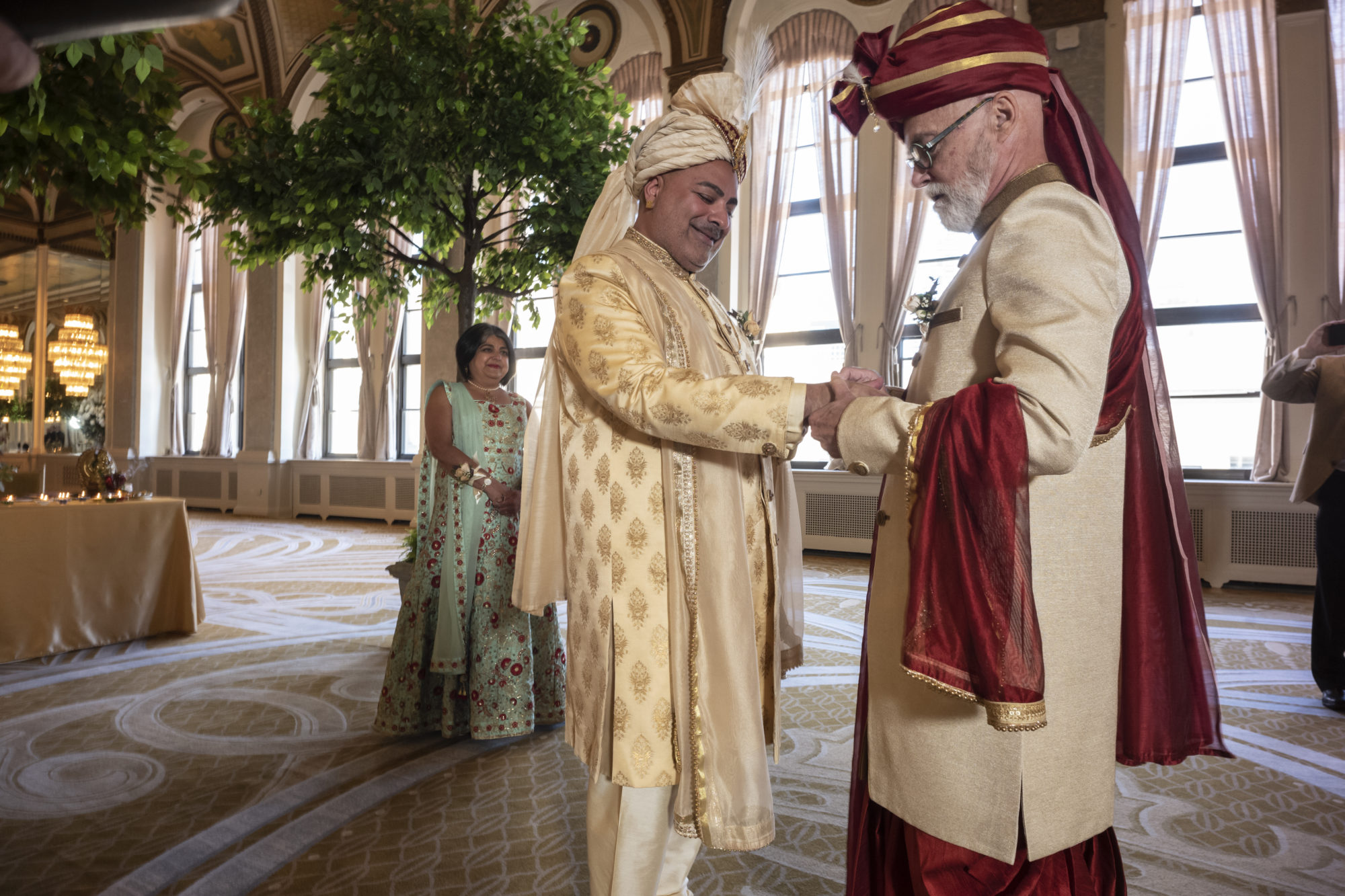 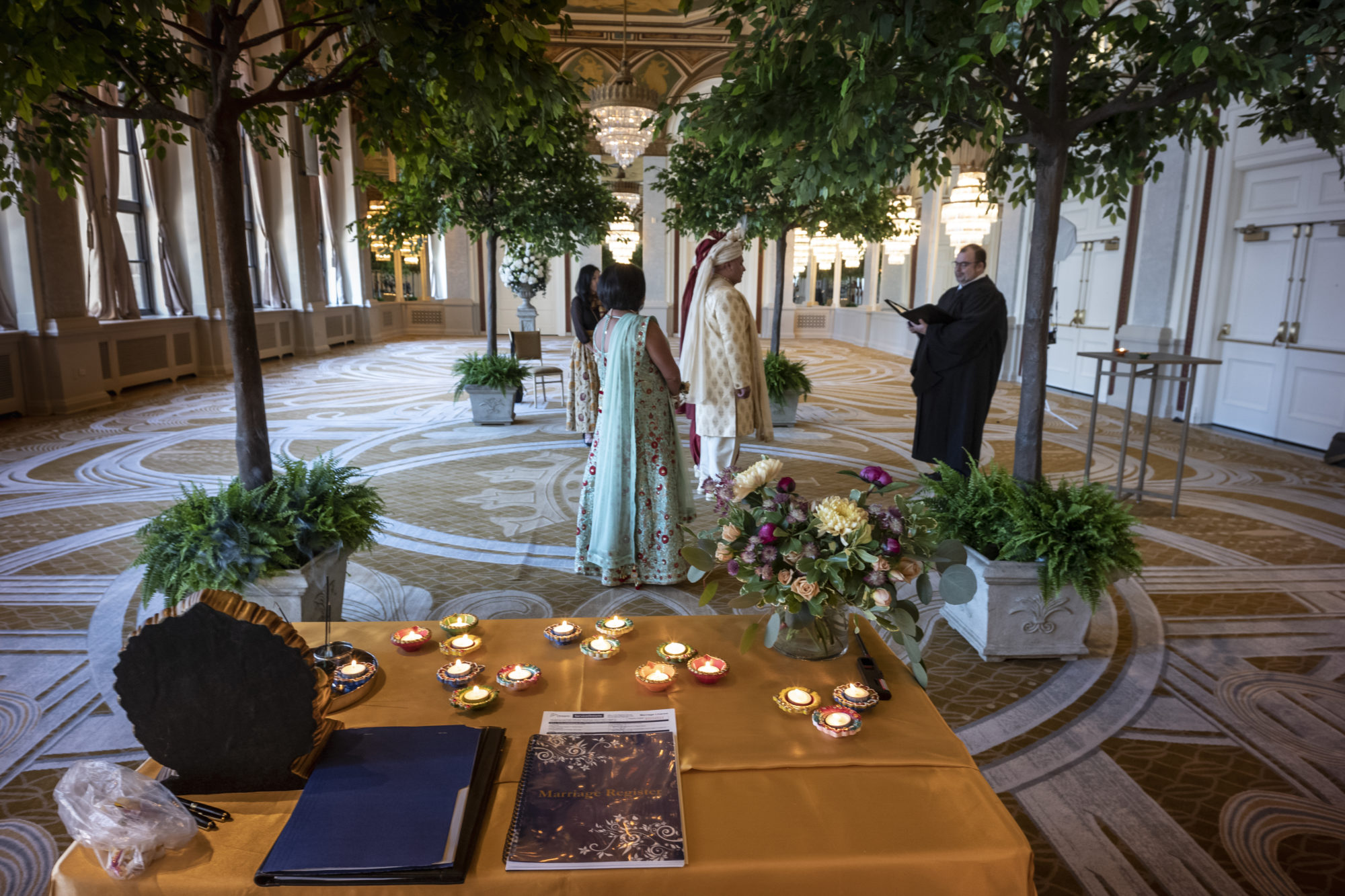 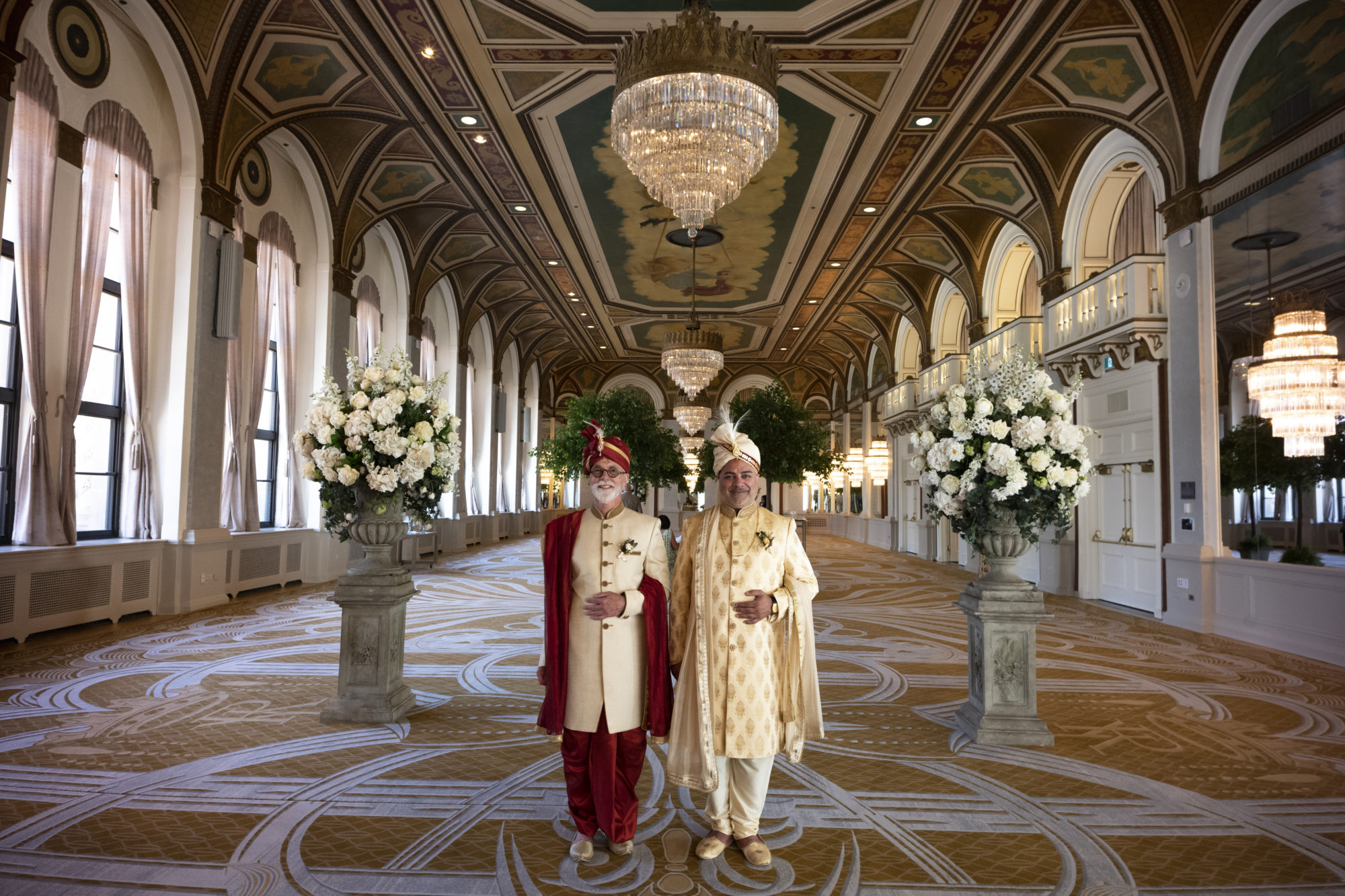 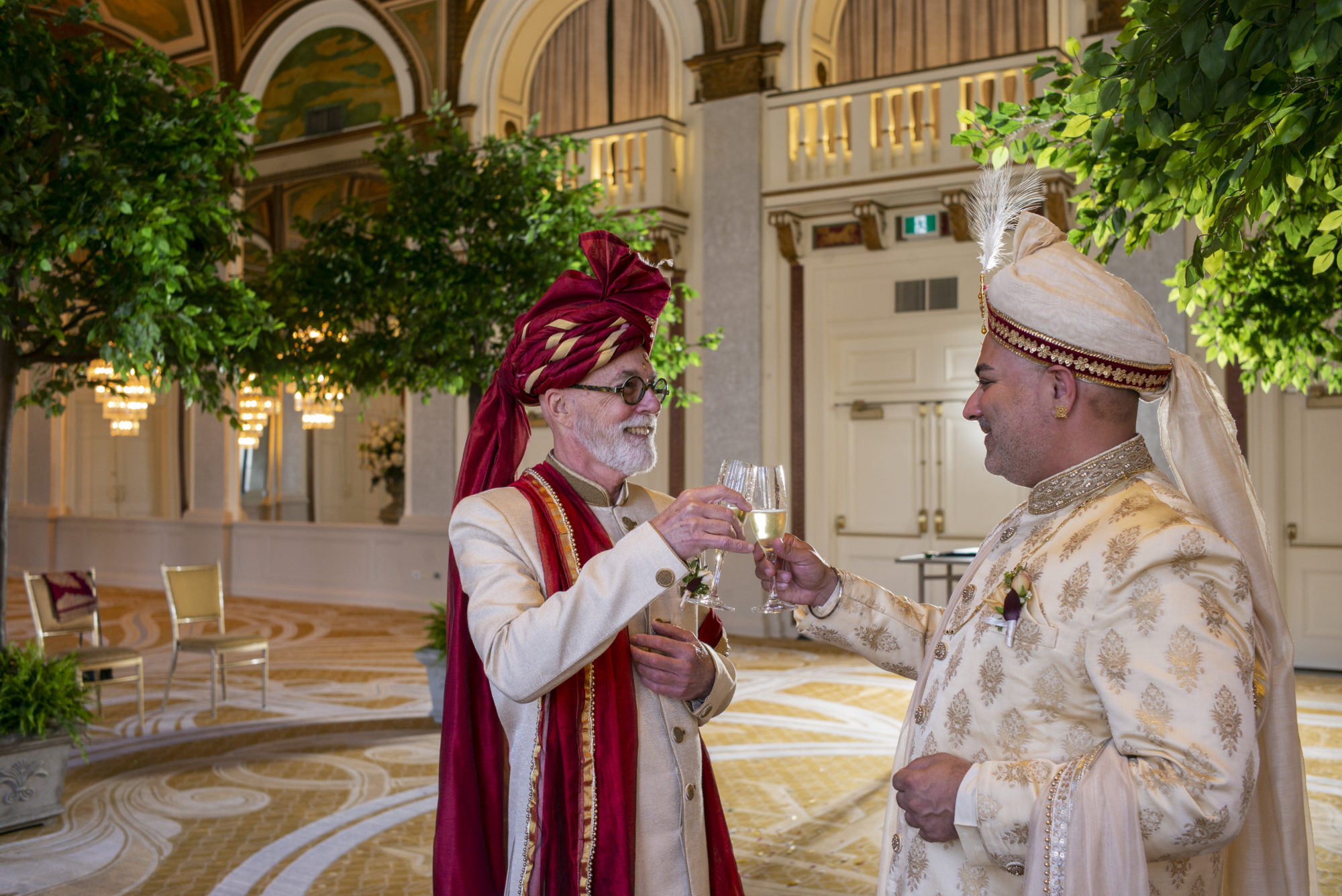 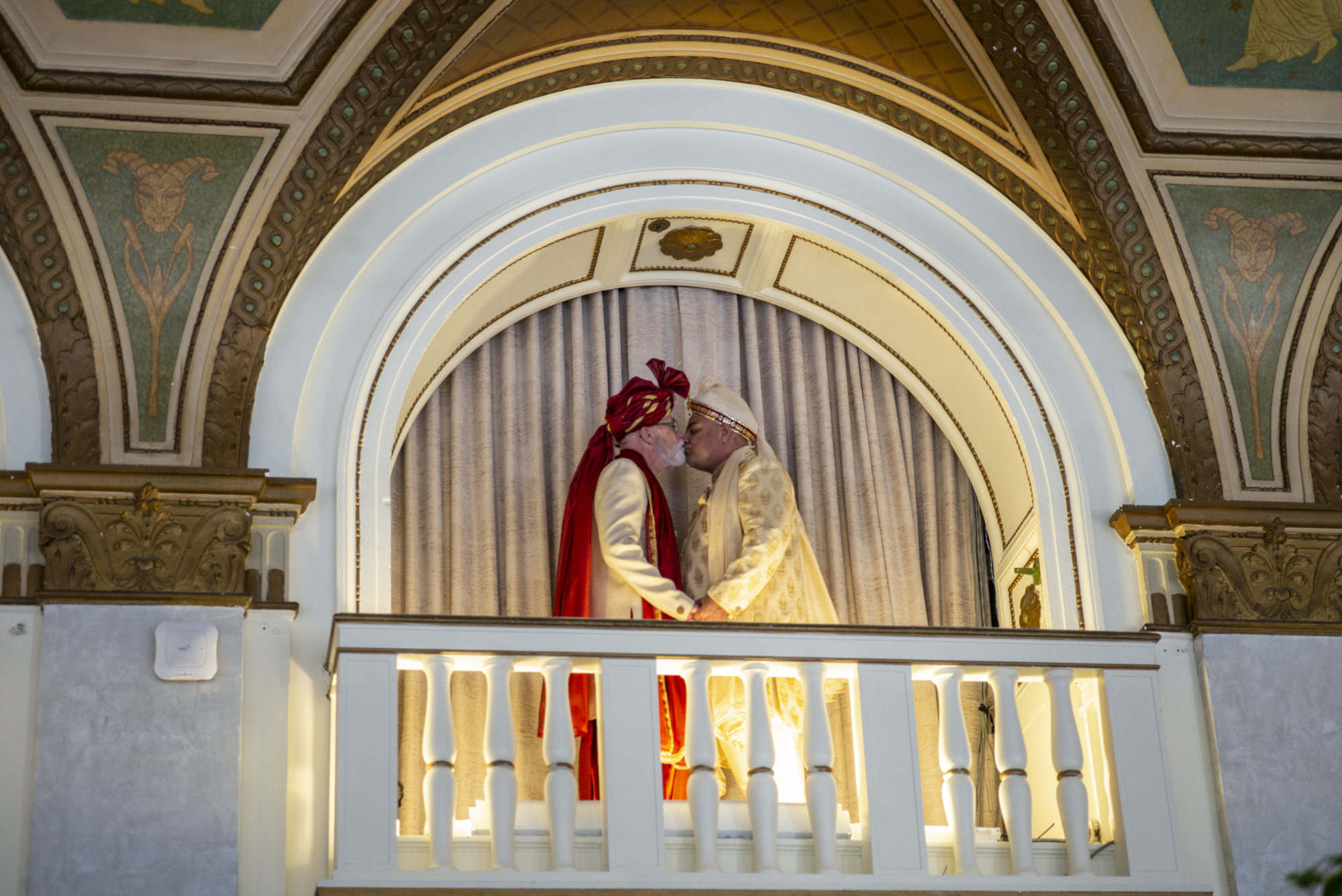 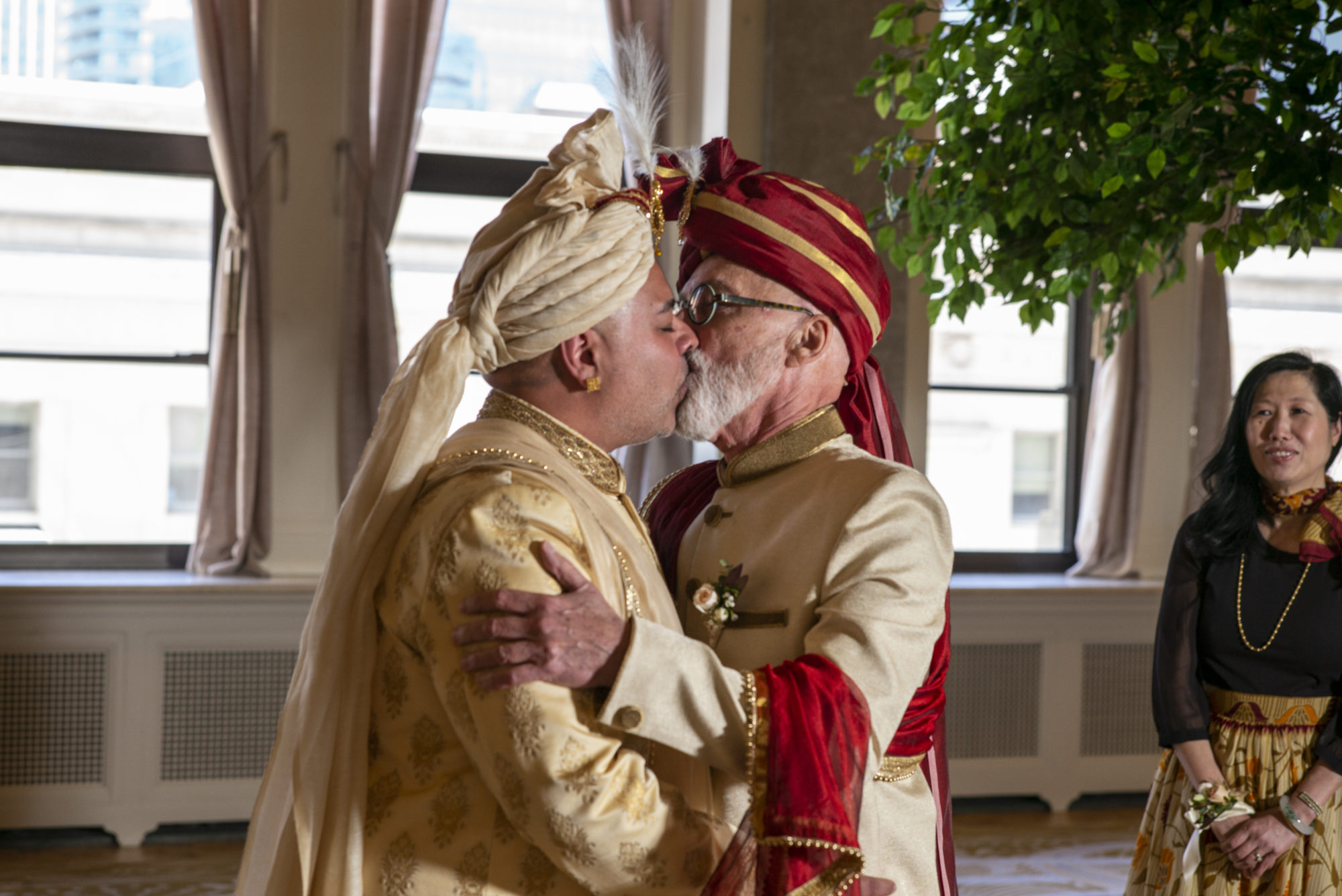 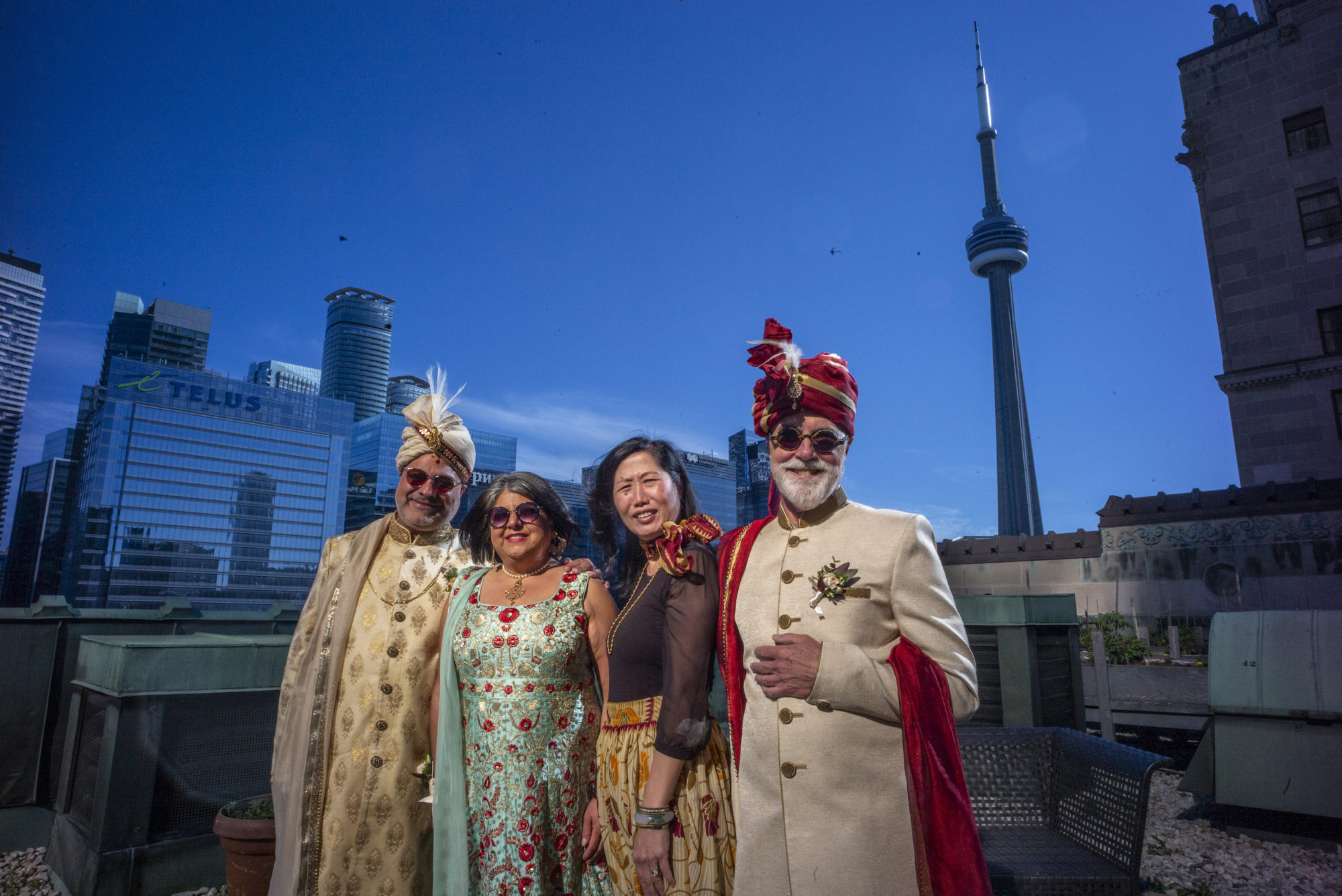