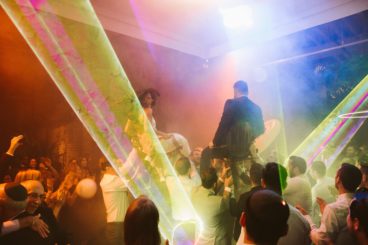 Inside a wild Ibiza-themed ceremony in the Distillery District, with lasers and pyrotechnics

Raphi Aronowicz and Corrie Pollock met at a mutual friend’s house while they were at McGill University in 2005. At the time, they were both dating other people, but they hit it off. They stayed friends and, when they were both single in 2012, they started dating. For their first date, Raphi, the co-founder of the on-demand flower delivery service Tonic Blooms, and Corrie, a freelance publicist who handles the company’s PR and communications, went to see Café de Flore at the now-defunct Cumberland Theatre. One night in September 2016, after an indulgent dinner at Ufficio, the couple came home and got into bed. Raphi brought out a ring and proposed with no frills. “I’m not the romantic type,” says Corrie. “I definitely would’ve cringed at any candles or rose petals or public proposals, so it was perfect.”

Corrie didn’t want an overly sappy wedding, so the couple began planning a day that was less about their romance and more an excuse to throw an over-the-top, all-night rager for their friends and family. “We’ve been to so many weddings, and we’ve always thought the sit-down dinner and million speeches take away from the party. We wanted something more fun and casual,” she says. The couple considered getting married in Ibiza, but realized not everyone would be able to come. “So we decided to get married here and just bring Ibiza to Toronto.” 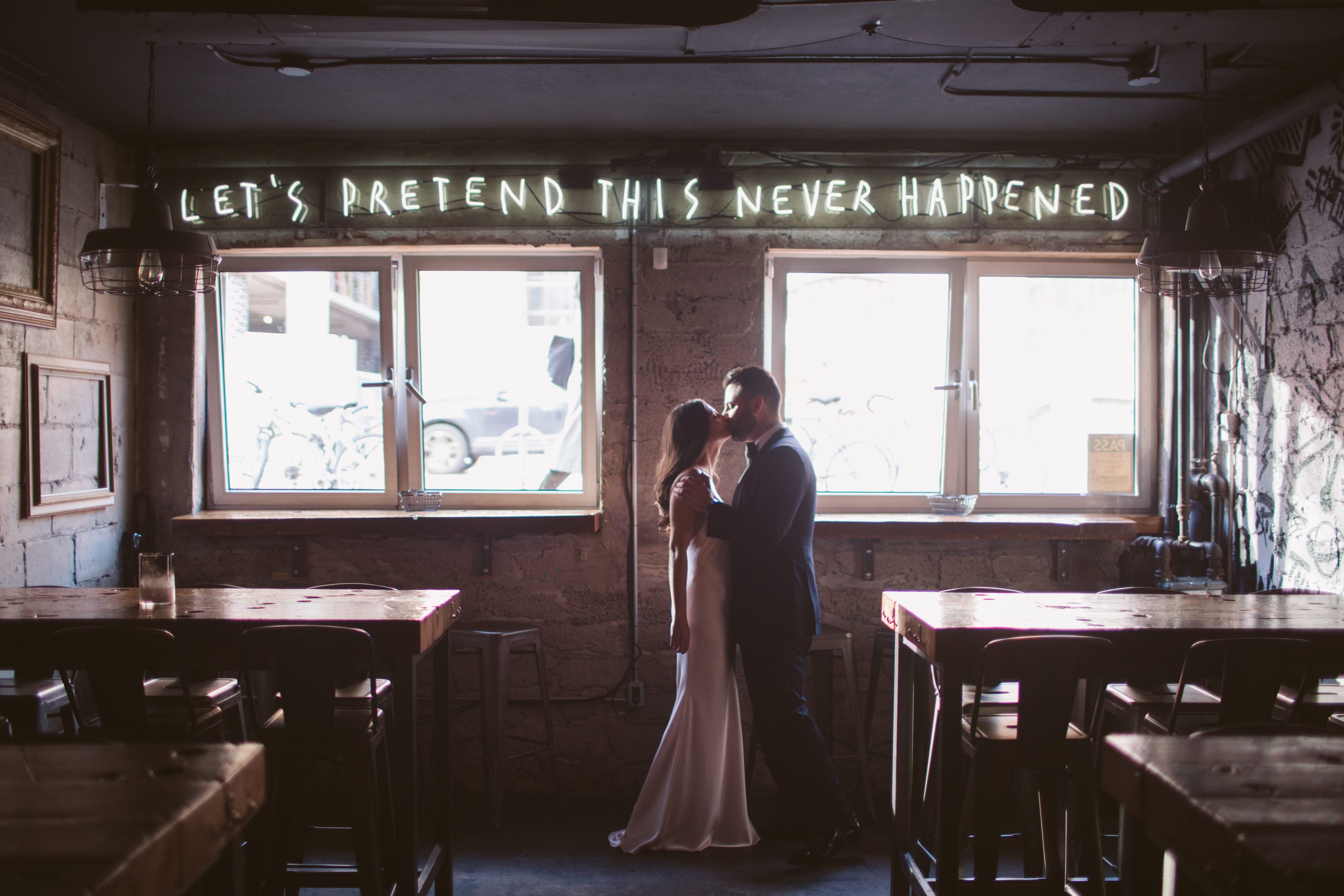 Raphi’s mom is a graphic designer, so she made the invites: 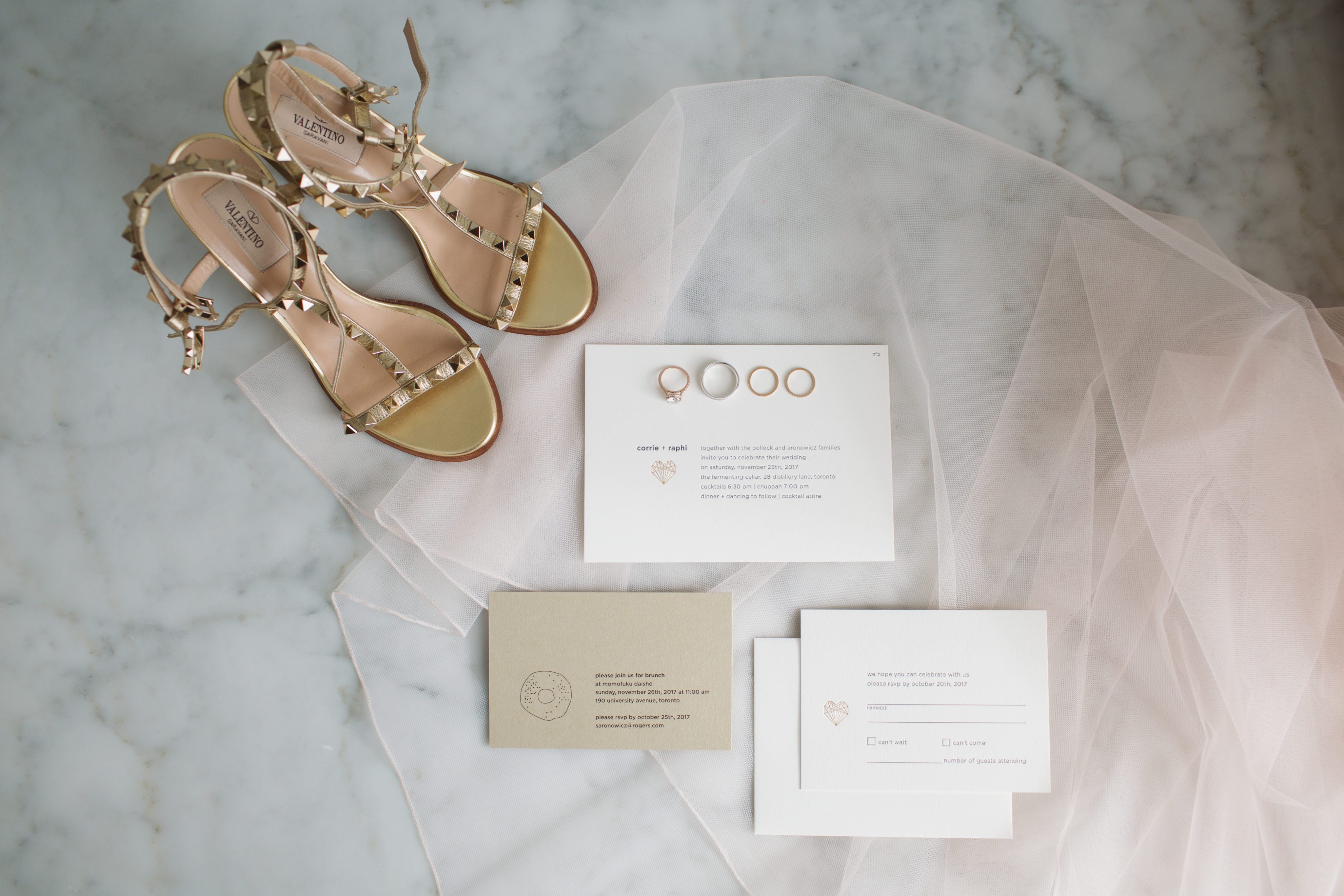 The bride designed her blush gown and had it made by Tomè Dress Salon: 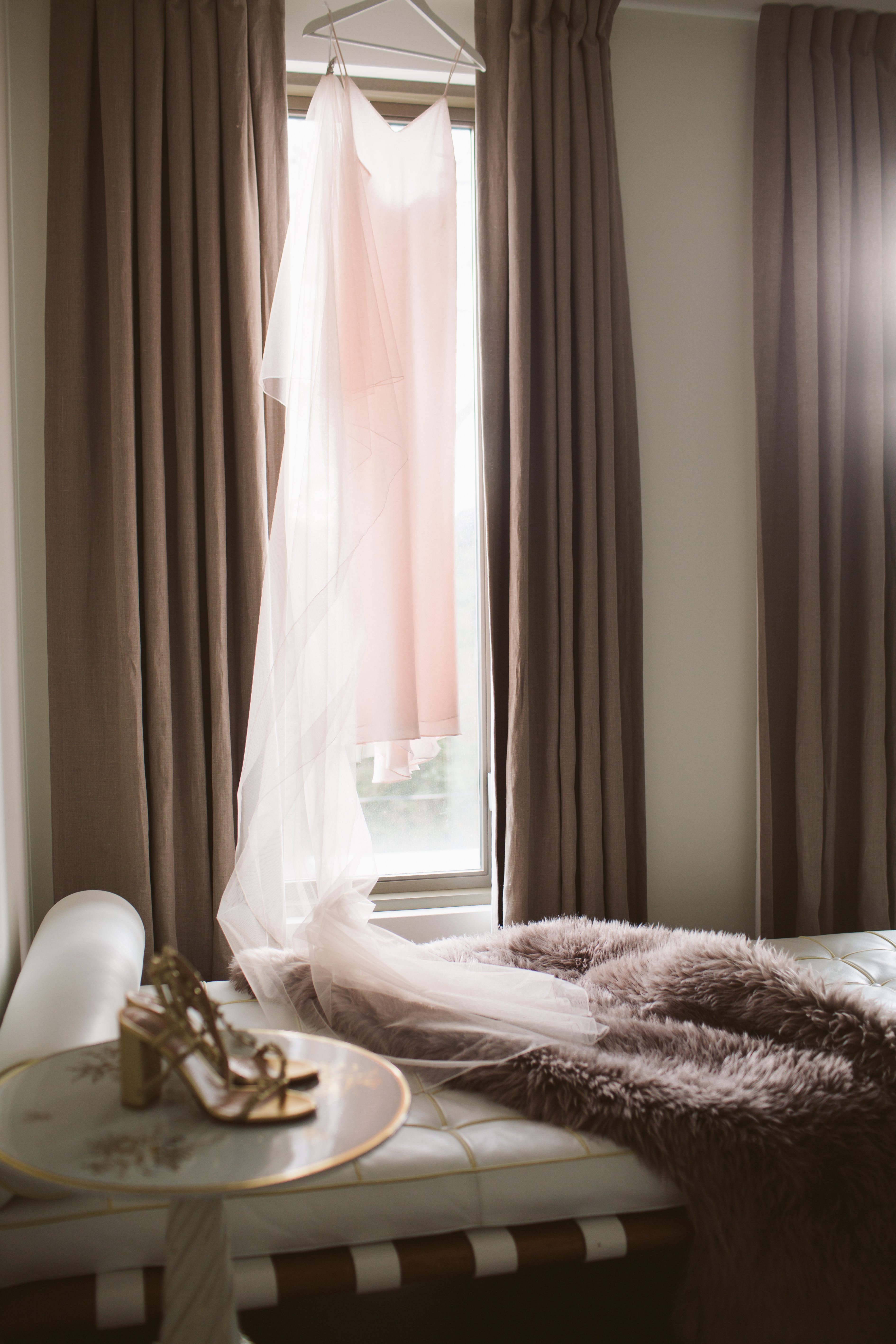 The couple decided against having a wedding party, which allowed them to spend the hours before their wedding together: 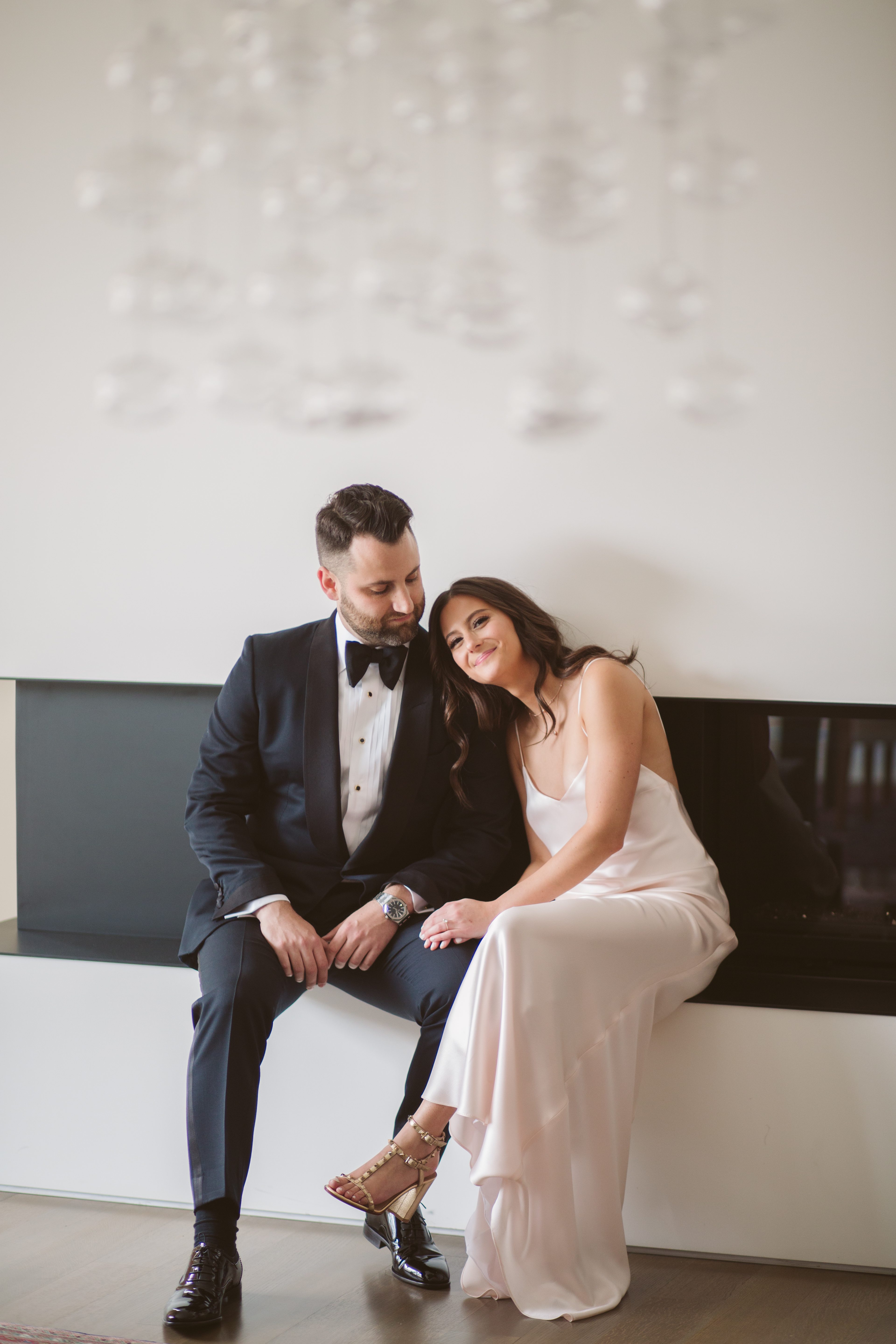 Oh, and there was this. A friend arranged for the Raptors mascot to pay the couple a visit as they were prepping:

Had a busy day today @raptors fans! First, I surprised this couple before they went to get married!! #weddingcrasher pic.twitter.com/ZOJwyK9j3L

To get the Ibiza feel inside the Fermenting Cellar, the couple incorporated tropical greens and ditched the usual flowers, apart from the orchid centrepieces and bride’s bouquet. The entrusted their florist, Stemz, with the look. “They were so unbelievably creative and far exceeded our expectations,” says Corrie. “The industrial space was completely transformed with all the greens to the point where it almost felt like a destination wedding”: 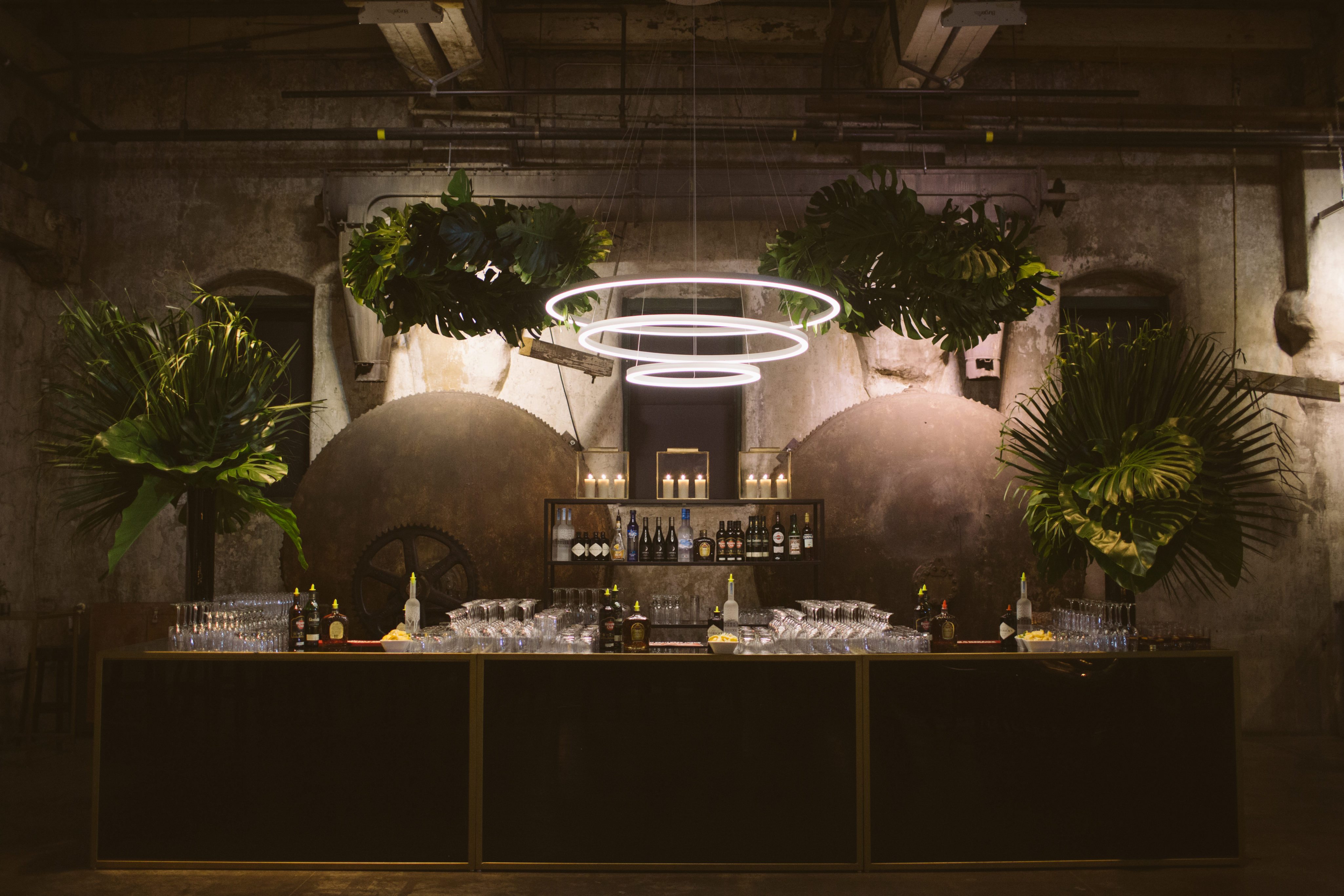 As guests arrived, a DJ played the couple’s favourite house music to establish the nightclub vibe. The couple had a traditional Jewish ceremony, albeit with a few tweaks: it took place on the dance floor, guests stood in a circle around the couple, and the chuppah was suspended from the ceiling: 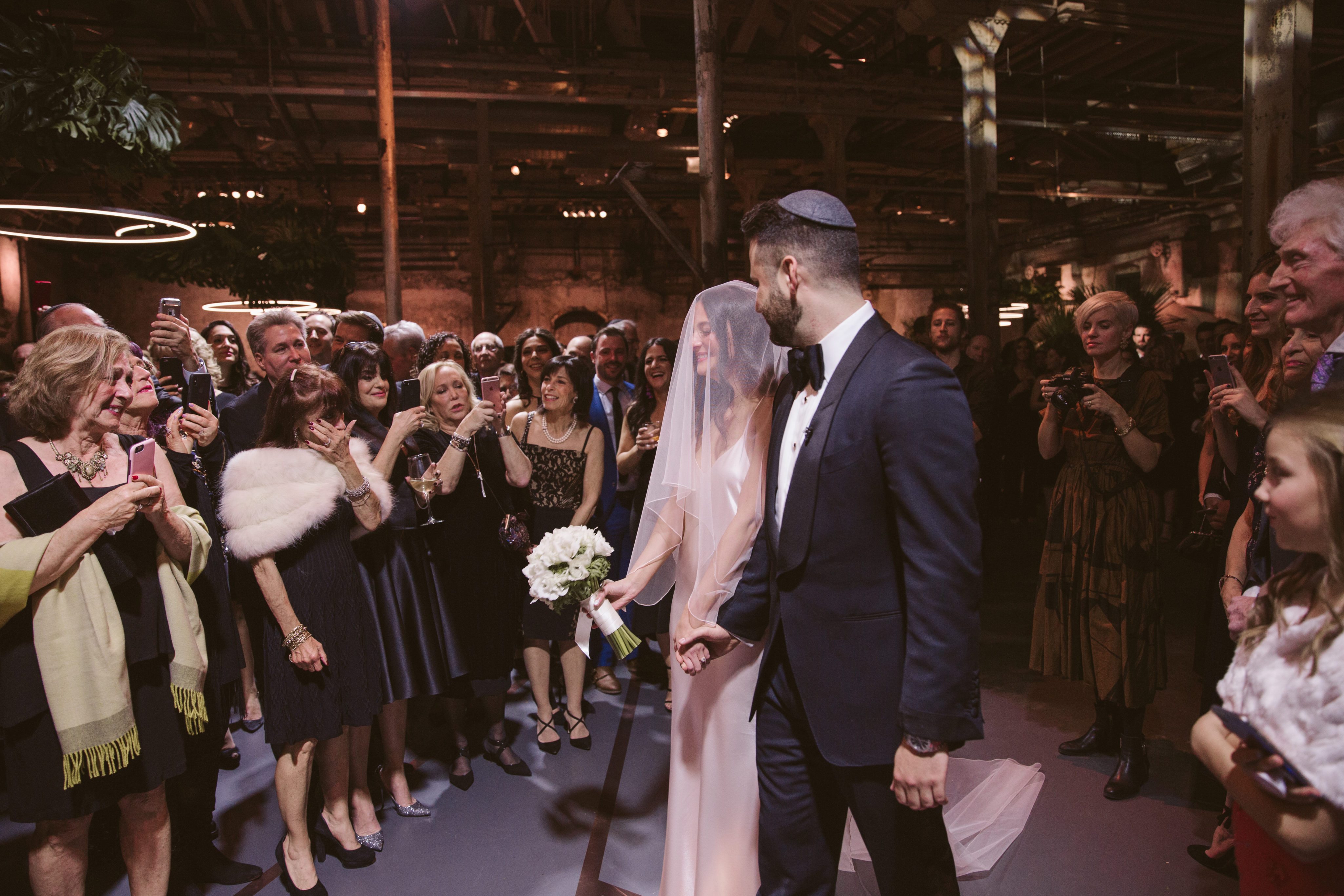 After the couple broke the glass, stage curtains dropped revealing a stage. A club remix of The Temper Trap’s “Sweet Disposition” played and pyro machines began sparking. The couple had originally planned to use confetti to recreate that Ibiza nightclub vibe, but the venue vetoed it because of the mess it would make. Their wedding planner suggested pyro as an alternative, and when they learned from the supplier that they’d be the first in Toronto to use their machines, they were sold: 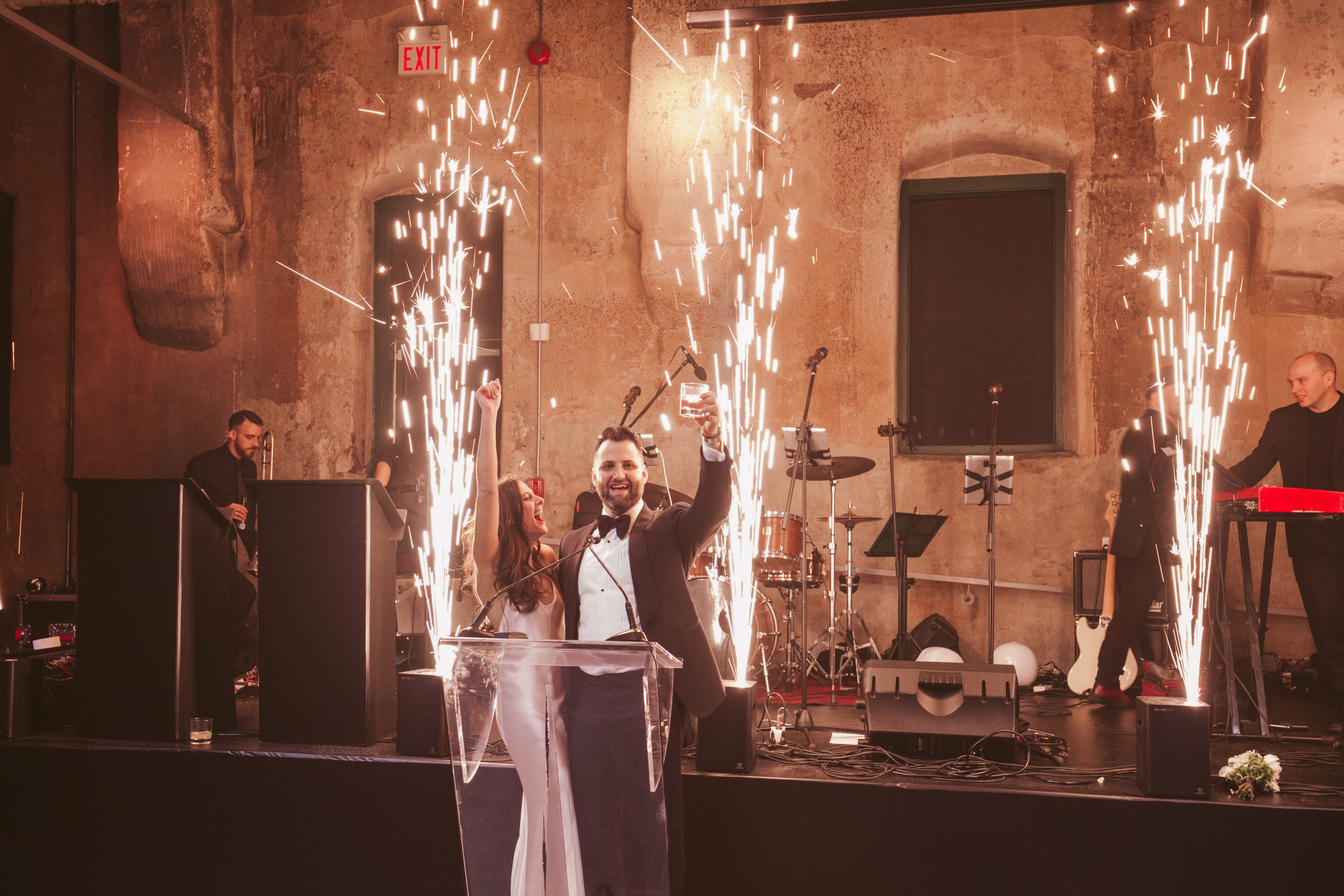 After a few minutes for hugs and kisses, they went right into the hora, complete with lasers that continued throughout the evening: 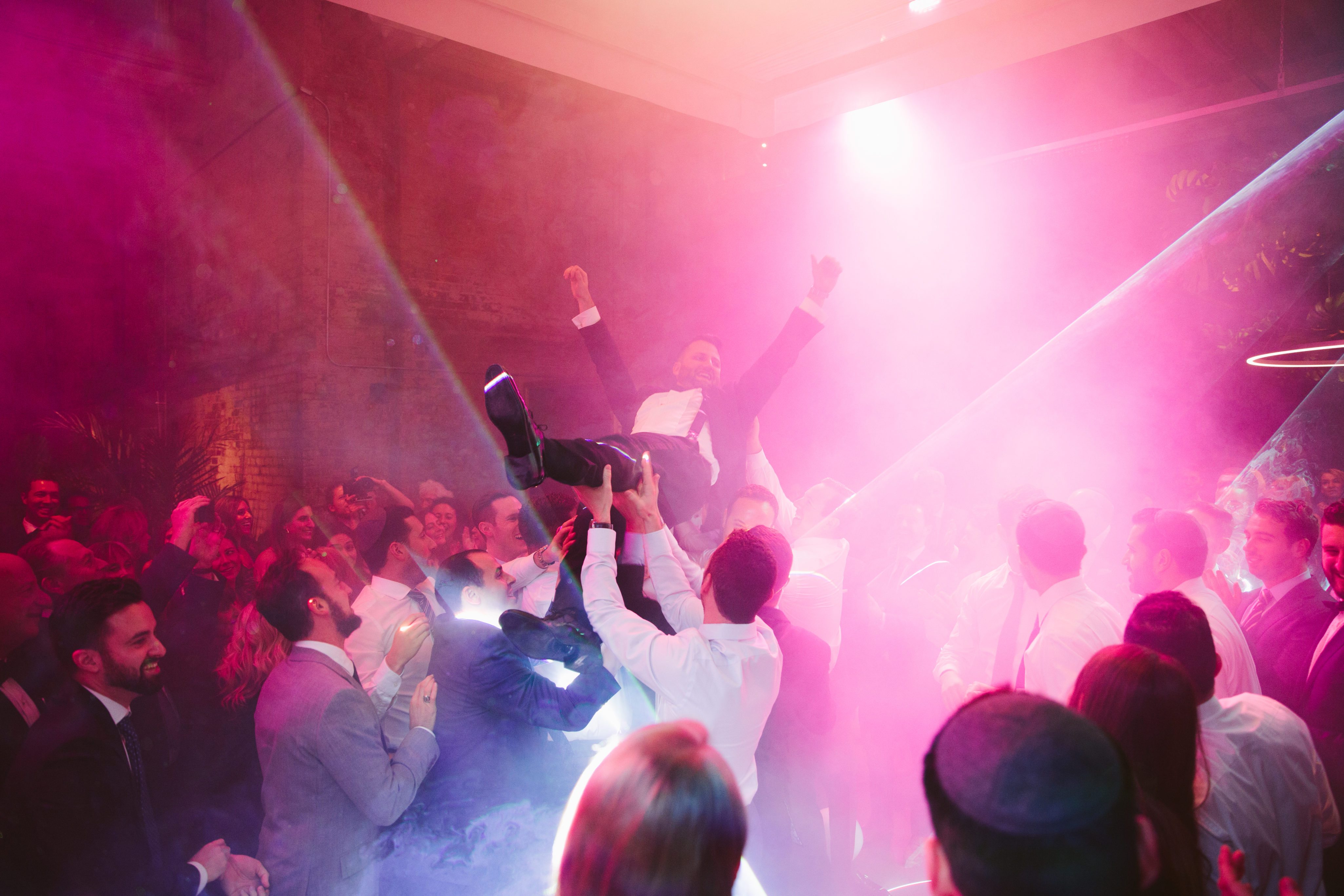 “We’re both into house music, so we really wanted a DJ, but our parents insisted on a band,” says Corrie. “We compromised and got both”: 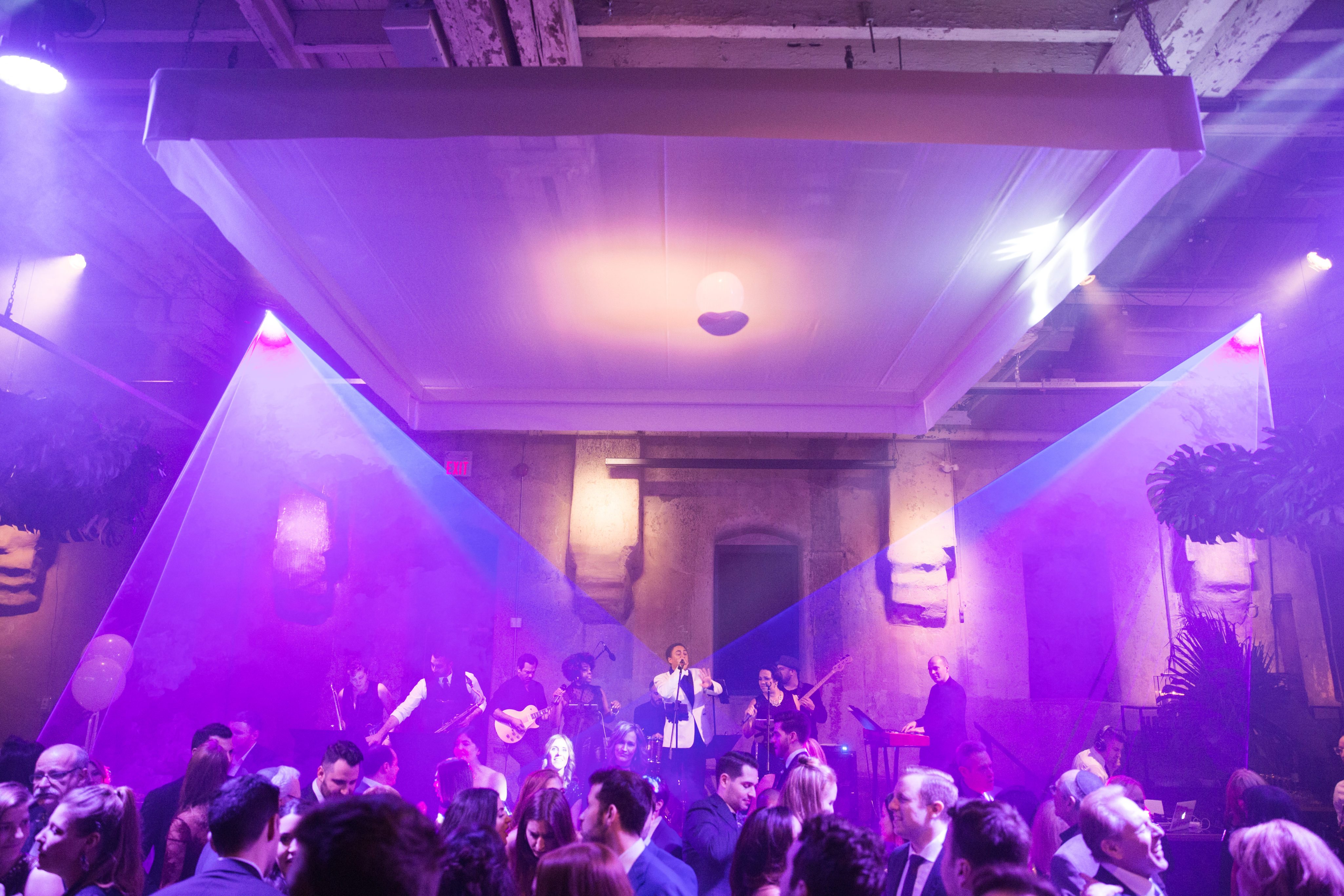 Instead of a sit-down dinner, there were food stations around the venue serving fried chicken, mac and cheese, pasta and meats. They assigned guests to sections, where there were high-tops and lounge areas, but made sure there were enough proper dining spaces for their older relatives and parents’ friends. “No one was seated for that long,” says Corrie. “They spent the majority of the night on the dance floor and at the bar”: 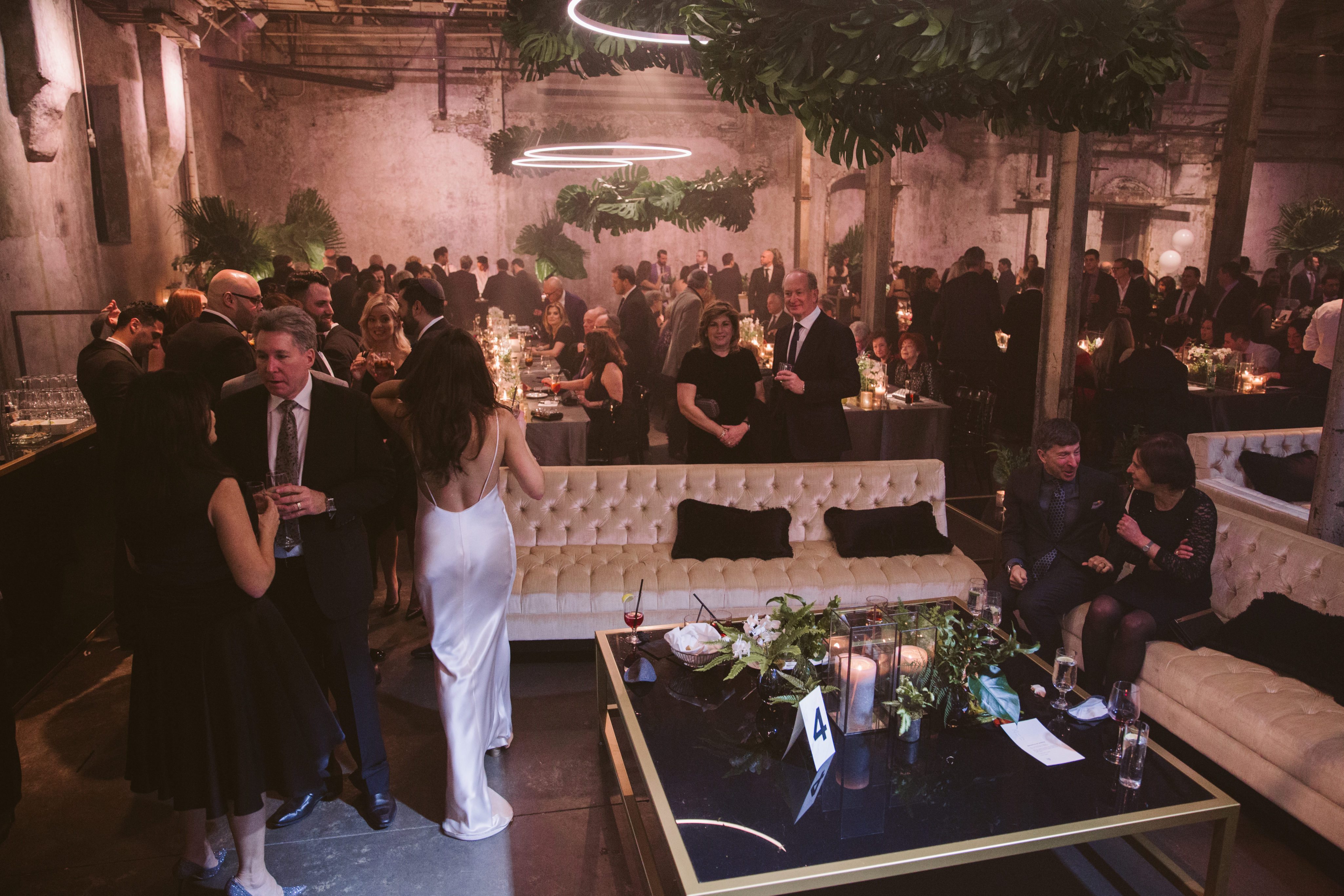 Instead of a traditional wedding cake, they served s’more bars and pop tarts from Bake Shoppe: 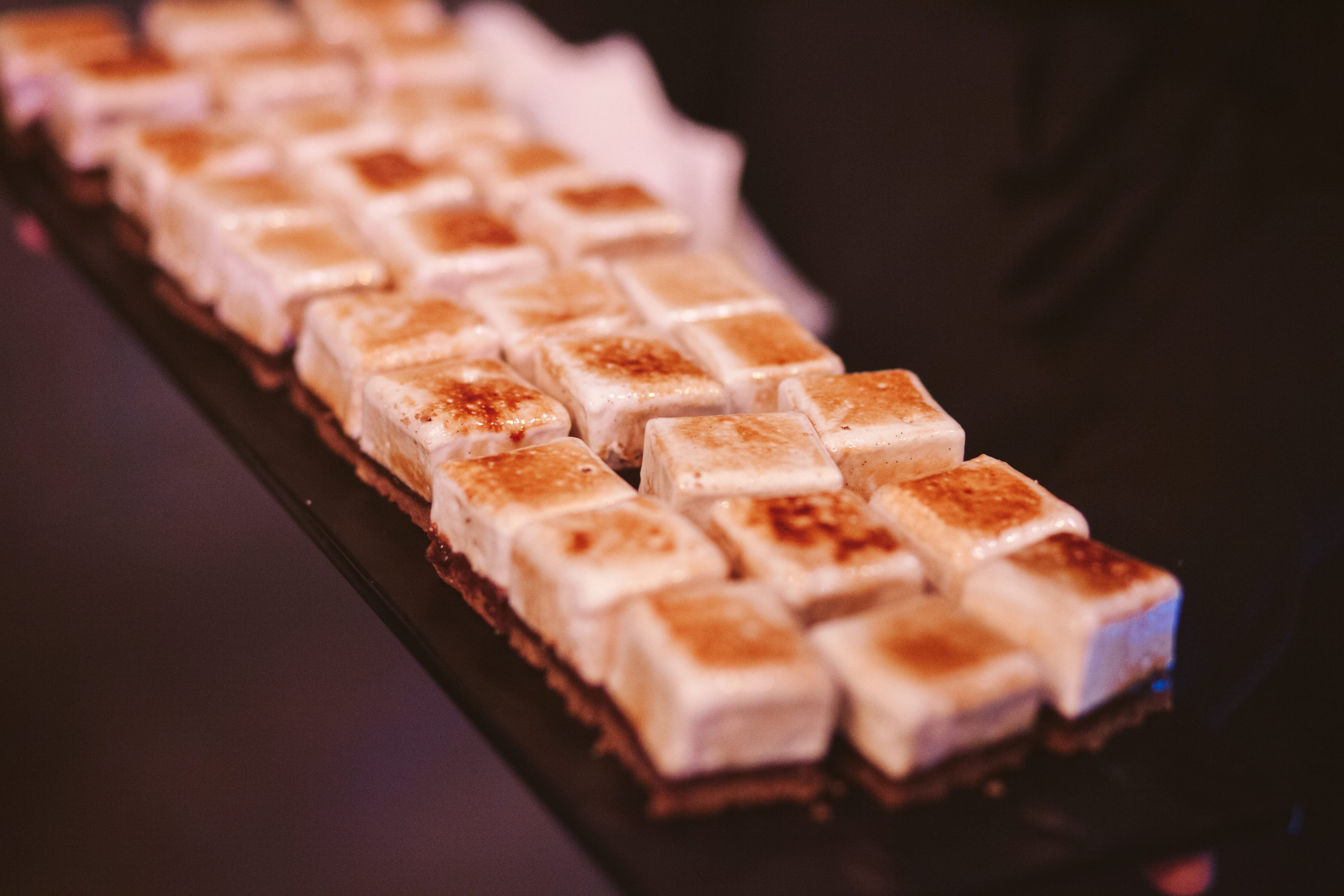 After the reception wrapped up, a school bus drove revellers to the after-party at a friend’s house near Bathurst and Lawrence, which finally fizzled out at 6 a.m.