Our wedding at Canoe was cancelled, so we got married on a condo rooftop

Our wedding at Canoe was cancelled, so we got married on a condo rooftop 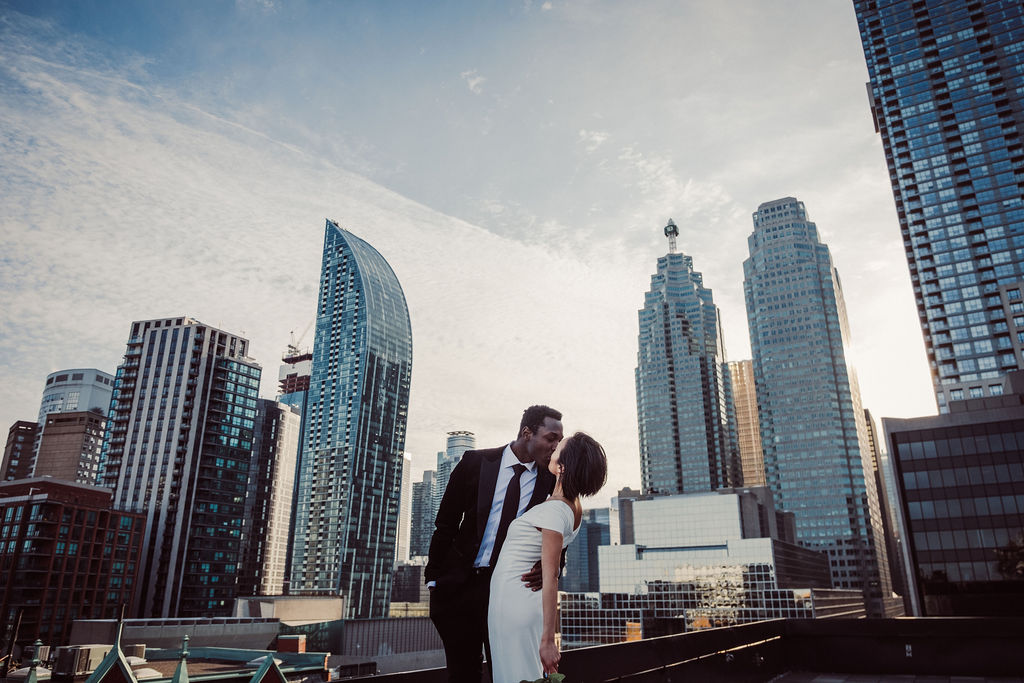 John Kyeremeh, a marketer for a tech company, and Kim Nguyen, a financial asset manager, were planning to get married at Canoe on March 28. The venue called to cancel two weeks before the wedding, so the couple hosted a socially distanced ceremony on John’s rooftop instead. Here’s what happened.

Kim: We met in November 2018, at a house party thrown by members of our church, C3. We attended different campuses of the church, so we hadn’t seen each other before.

John: I had just finished volunteering with the church youth group when a buddy invited me to the party. It was fun: we prayed, we drank some wine and I met Kim there.

Kim: It was love at first sight for me. I spotted him across the room and immediately wanted to talk to him. Once friends introduced us, we talked about psychology and our favourite musicians. We didn’t end up exchanging numbers and I don’t have social media, so I didn’t see John again until New Year’s Eve, when I hosted a party. I pretty much threw it just so John would come. I asked our mutual friends to invite him.

John: The night of her party, I was sitting in the building’s lobby contemplating if I wanted to go upstairs. I was waiting for a friend, who was late, and I had two or three other parties to attend. Then I saw Kim come down to the lobby. 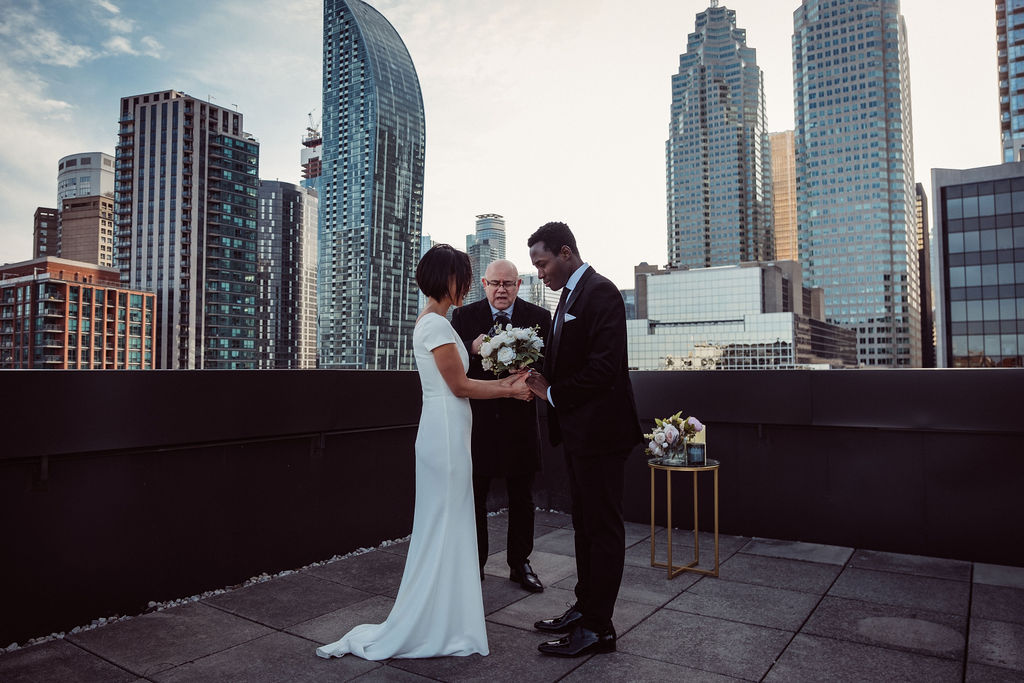 Kim: I have a friend who is blind, and he couldn’t find the entrance, so I came down to help him but I didn’t bring my jacket. I saw John and asked him for help. We all walked up to the party together.

John: I chatted with Kim at the party and was always waiting for her to come back whenever she’d go off to check on other guests.

Kim: John is all about deep conversations. His first line in my apartment was, “So Kim, what are your passions?” I told him I love scootering, which wasn’t a lie. I used to scooter to work when I lived in Victoria. He was confused, but then I whipped out my scooter from under my bed. He dared me to scooter in the hallway, so we did. 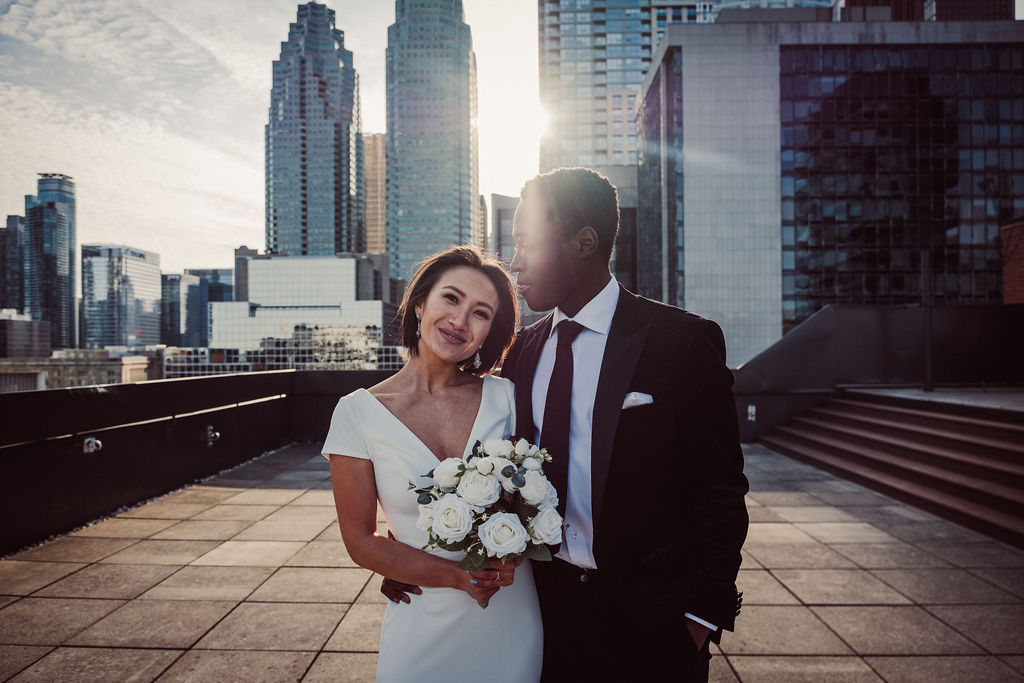 John: I thought, Wow, this girl is really cool. The next day, I hung out with Kim and six of her girlfriends. We all went to see Shoplifters at TIFF. I was worried I was being friend-zoned, but when I arrived to the theatre, they had left me a spot next to Kim.

Kim: Our second date was to see A Star is Born, just us two. We got engaged in October 2019.

John: I took Kim to Elora, and planned a full day of touring the town. At the end of the day, we hiked into a gorge, and I asked two girls who were also there if they would take a photo of us. Right before, I whispered to them I was going to propose and they captured the moment. 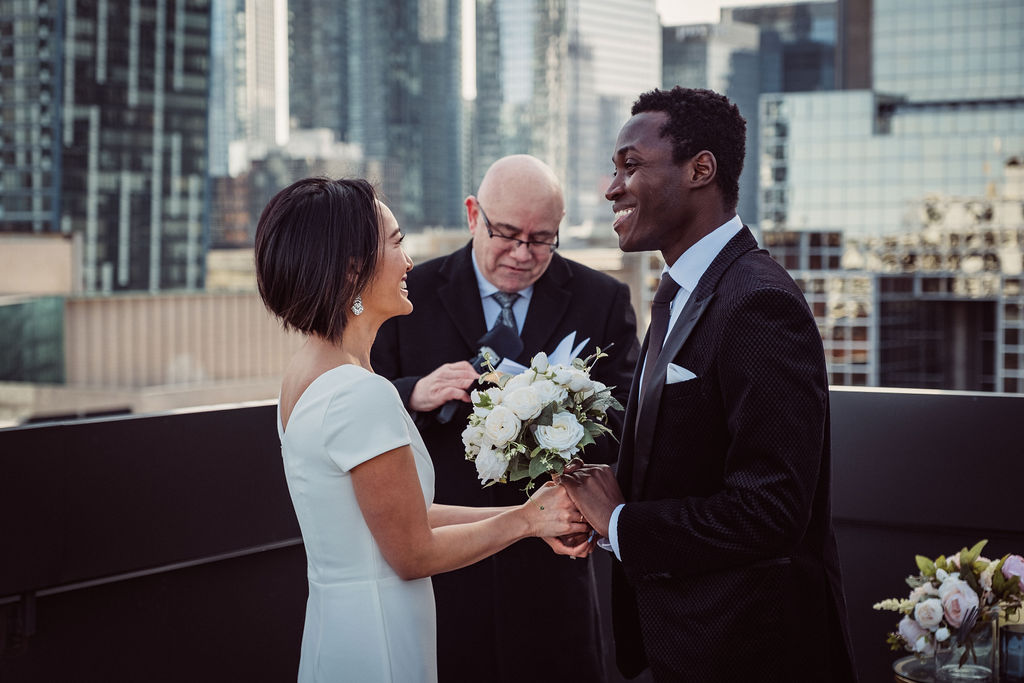 Kim: We chose Canoe as the venue for its beautiful view and settled on March 28. We wanted it to be elegant and simple—an intimate party for 85 of our family and friends. We had a live band, a photographer and all our other vendors booked. I’m from Victoria, and my family was flying in from L.A., Seattle, Portland and Victoria.

John: At the beginning of March we started getting concerned about Covid-19. I sent an email to our guests on March 13, saying that the wedding was still on.

Kim: My work was talking about work-from-home contingency plans, and I thought, Okay, this is serious. On Monday, March 16, we got the call that Canoe would be closing and wouldn’t be able to host our wedding. It was tough. There were lots of tears. I decided to run to city hall to get our marriage licence, just in case. Two days later city hall closed down. 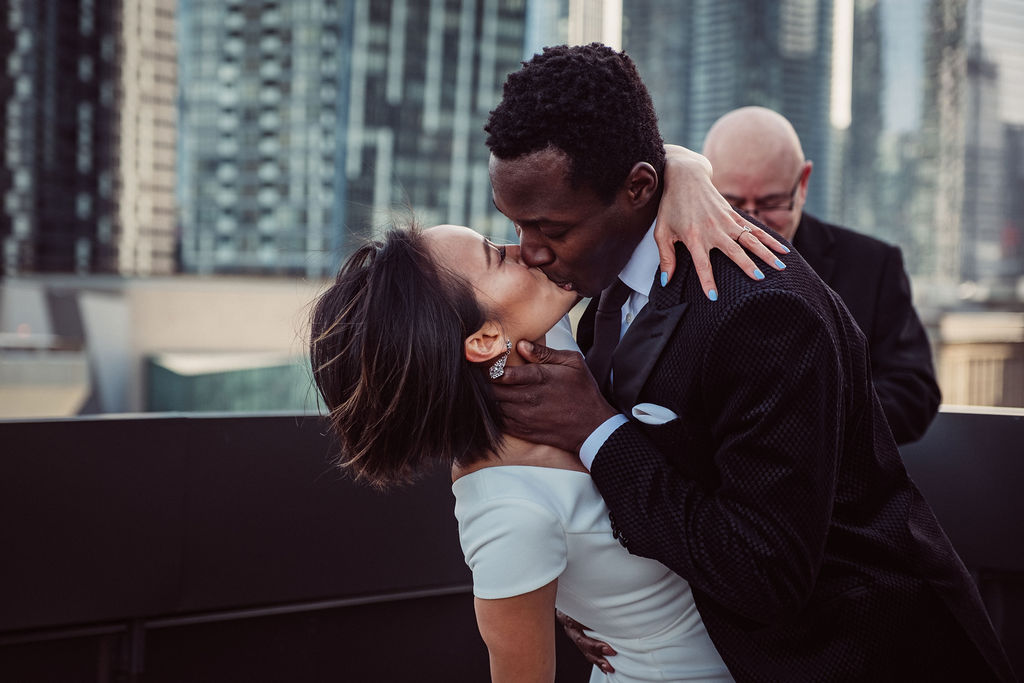 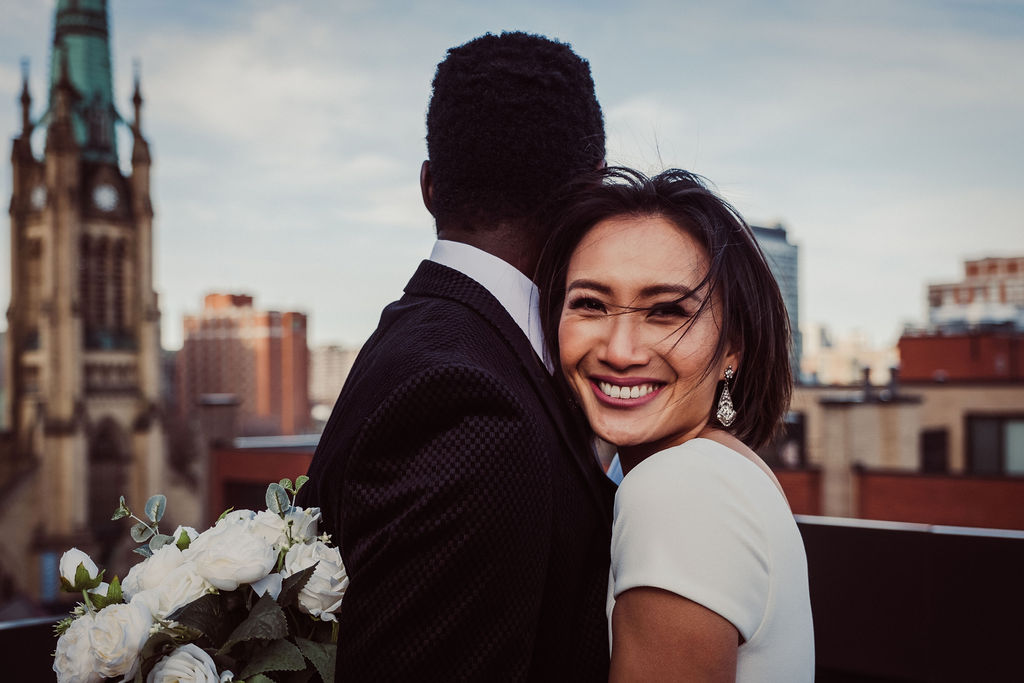 John:  We were in shock, and pretty devastated. We were so close! On March 17, I had to go back to our guests and break the news.

Kim: We called our parents and siblings first. They were really supportive. My parents said if we needed them there for a small ceremony, they would drive from Victoria to Toronto. The next day we called all our vendors. We didn’t get most of our deposits back. We had given the restaurant $20,000, and got half of it back. We were also given a deferral to use the rest for a later date. We first considered getting married anyway after chatting with our photographer, Cameron Butryn, who is also a good friend from church. He told us he’d still do a photo shoot with just the three of us if we wanted. All the pastors we know in our church have young children, and we didn’t want to put them at risk, so we joked that if he knew an ordained pastor who didn’t have a baby he should let us know. He told us his dad was actually a pastor, and would be happy to officiate. We settled on March 22 as our new wedding date.

John: Cameron and his wife, Mikayla, would be our witnesses, and his dad was our officiant. We chose to hold the wedding on my condo rooftop. I moved there in July, and my unit was previously occupied by a good friend. I had told the same friend years ago that his rooftop would be the perfect place to propose to someone. So it was kind of crazy that I got to marry the girl of my dreams there. 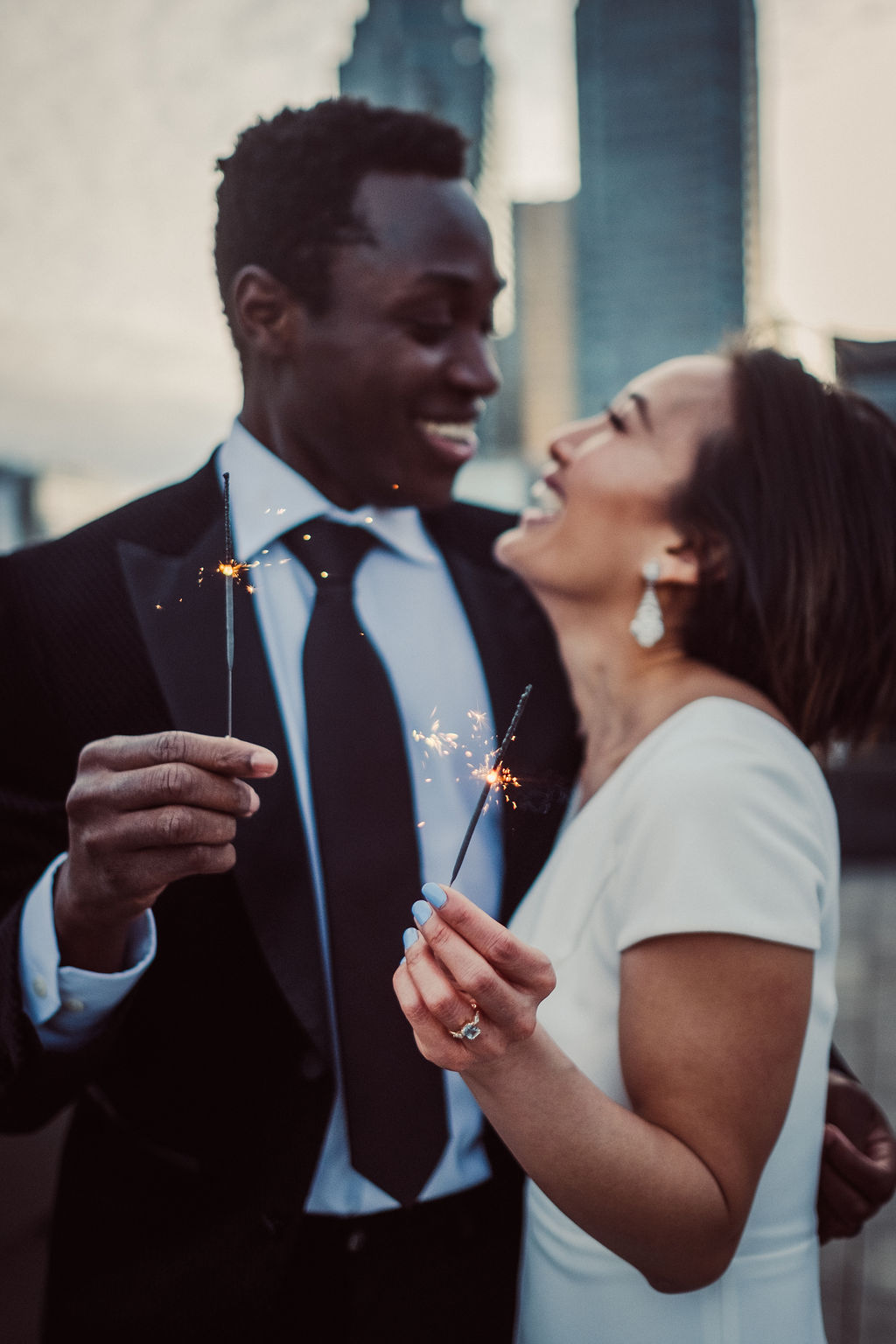 Kim: The morning of the wedding I video-chatted with my sister. She was originally going to do my makeup, so we did it together virtually. John has a two-bedroom, two-bathroom unit, so he got ready in one room and I got ready in the other.

John: I played video games in the morning and had a beer while video-chatting with some of my guy friends. We wore our original wedding outfits—I had purchased a suit from Harry Rosen.

Kim: I bought my dress online from BHLDN. I wanted something simple. I also made my own bouquet with flowers I had ordered from Amazon two days earlier. Cameron surprised us by bringing his assistant Shay Koshy to man another video camera, and he produced an amazing video of the whole ceremony.

John: In the video it looks like we were warm, but it was freezing. 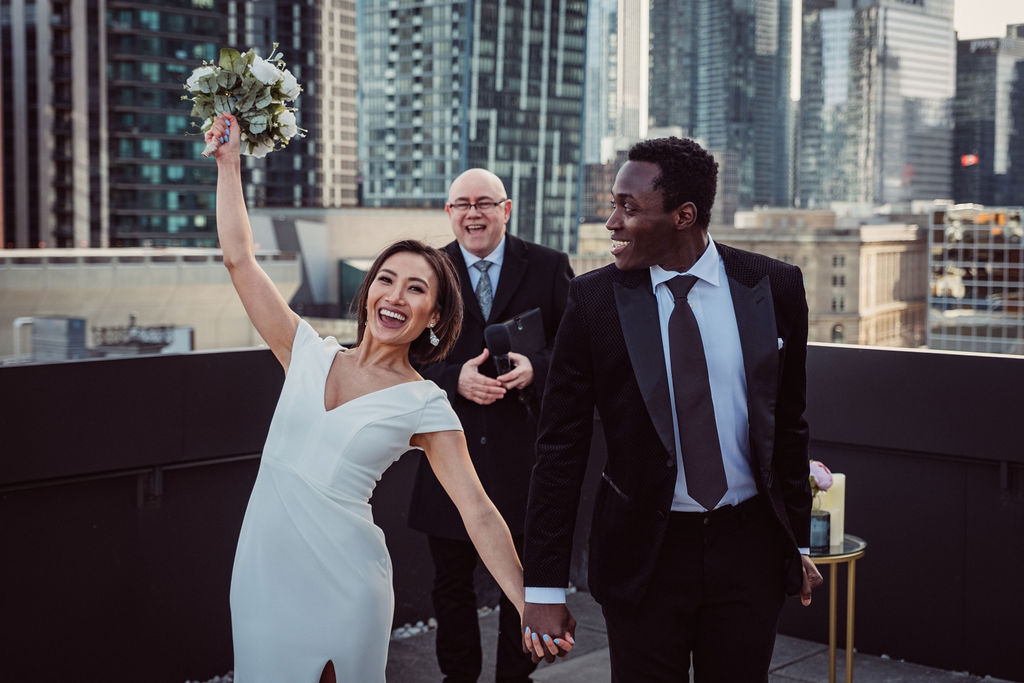 Kim: There’s a south and north entrance on the roof, so John came in through the south and I came in through the north, and we met on the south corner. We played “The Blessing” by Kari Jobe and Cody Carnes. Mikayla was our DJ and held up the speaker so we could all hear. I asked John the night before to keep the vows short because it was going to be cold. But John is such a romantic, so it didn’t really happen.

John: When I saw Kim walk down the aisle, I got really emotional. Everything stood still. We worked on our vows the night before, and I talked about the impact of the day and my commitment to her forever. We wanted to marry each other, and we are super-happy with how it turned out. With all the stress of planning for the big day, and the emotion of that not happening, we were relieved when it was done.

Kim: We signed the papers inside, and everyone went home by 6:30 p.m. We ordered pizza and took a hot shower. Once we were nice and warm, we sat on the couch and said our vows to each other again. I was trying to concentrate during the ceremony, but half my brain was focused on not freezing to death. I had always wanted to elope, and John joked in his vows that I was able to get my way. 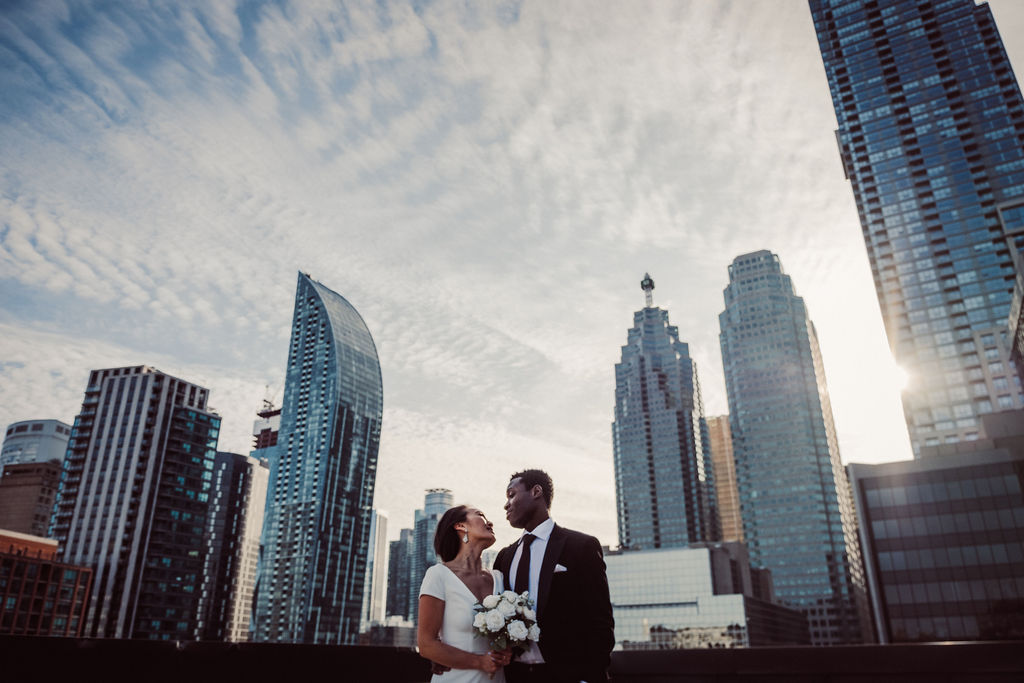 An earlier version of this story suggested that Kim and John only received 50 per cent of their deposit back from Canoe.