“One night I woke up with ice all over my face”: This mature student sleeps in his camper van to afford school

“One night I woke up with ice all over my face”: This mature student sleeps in his camper van to afford school 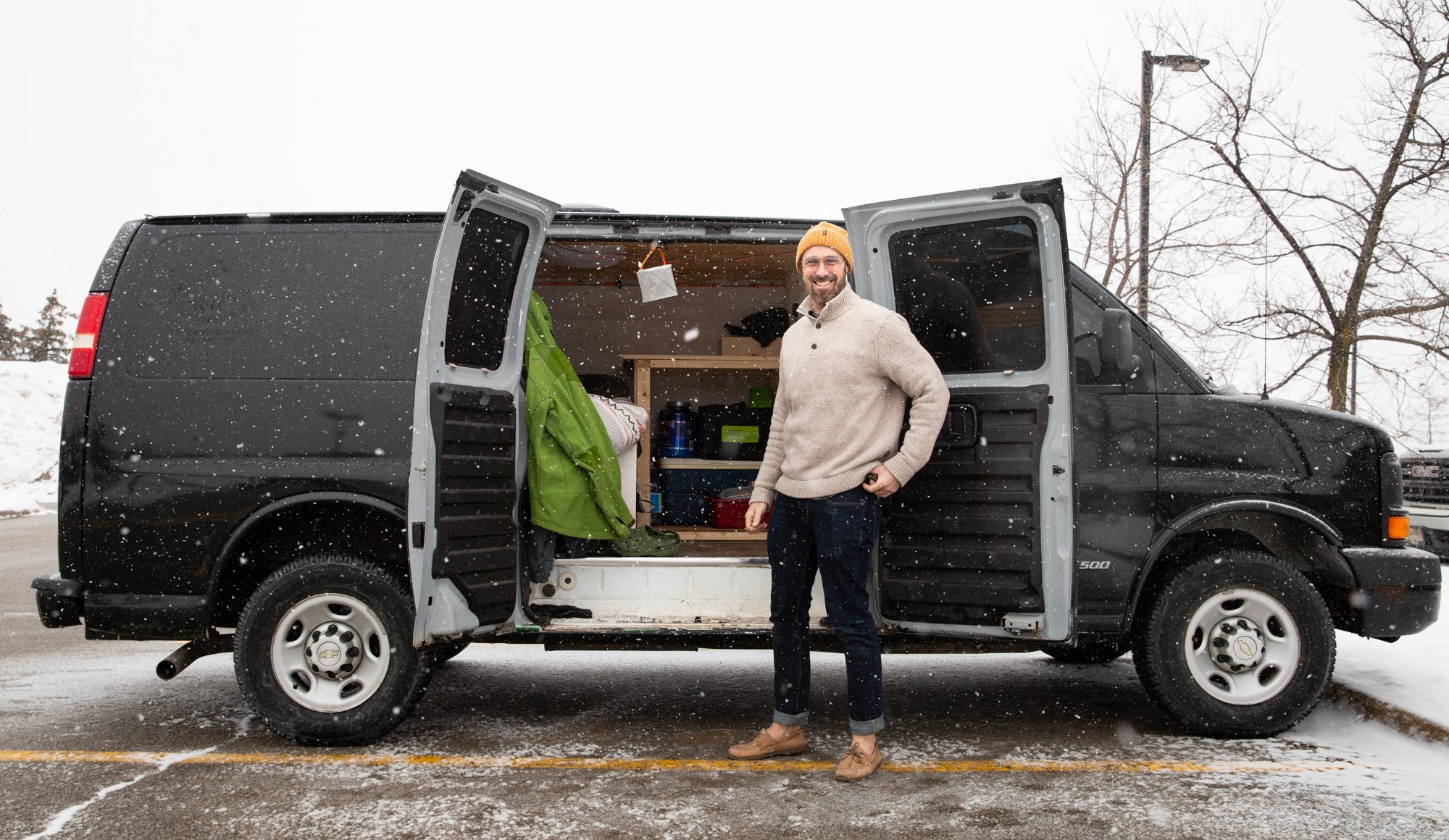 I bought this van in spring 2018 for out-of-town weekend excursions. Then, last year, I decided to go back to school at Georgian College to start a second career in massage therapy. I quickly realized I couldn’t afford my program—I would be paying $1,300 per month in rent and I had student debt for my first two degrees in teaching and geography. It would have been easy for me to decide school wasn’t for me at that time. Instead, I moved into my van at the beginning of the January 2019 semester.

The van wasn’t heated or insulated, and the first few nights were rough. I parked at a mall complex and used the bathroom at Tim Hortons. I’m a hardy guy, and it felt like camping. I would put on five sleeping bags, lie down and accept that it would take 45 minutes before my body warmed up and I’d be able to fall asleep. On my fourth night in the van, I woke up with ice all over my face and my beard. I went to Tim Hortons that night to warm up and conceded that I wouldn’t be able to sleep that night. 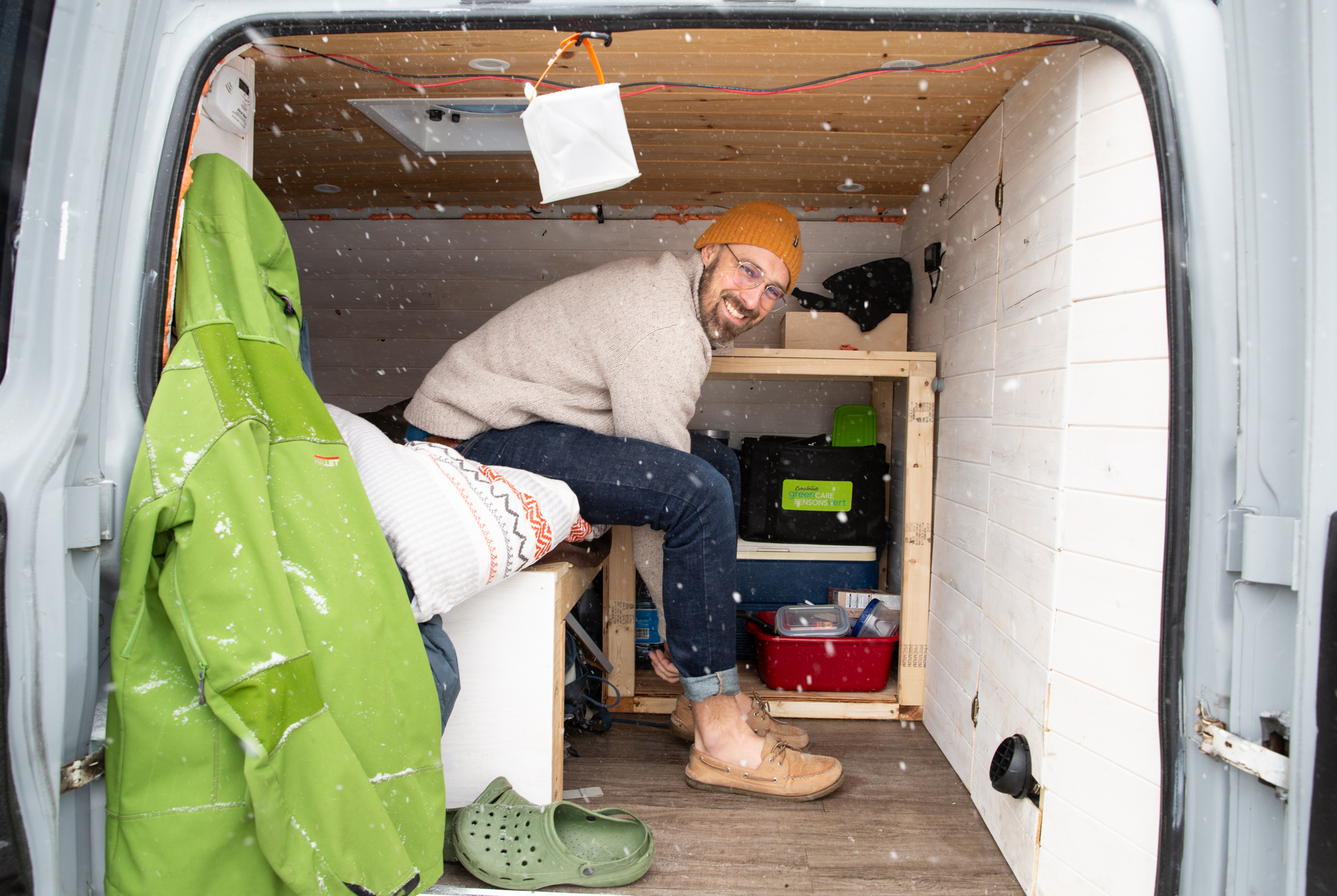 That first weekend, I built the insulation with extruded polystyrene. It cost about $250 and kept the van warmer. Three months later, winter was over. I had survived. I updated and improved the van as needed. All in, I spent $4,000 to add batteries, electrical, insulation, a heater, a bed, a cooler and a camp stove.

I’m a recreational climber, so I got a job at the climbing gym at Georgian College so I could shower. I got a second job at MEC, which has a small kitchen area where I can prep my meals for the week. I spent the first few months figuring things out by trial and error. In the winter, you can’t park on the street, so I usually park in lots. I try to find a quiet one where there isn’t a snow plow working at night—otherwise I can’t sleep. In the summer, I’ll go to a secluded residential area, sometimes a bit outside of Barrie. On weekends when I work at MEC, I’ll park in their lot. I’m working seven days a week right now. 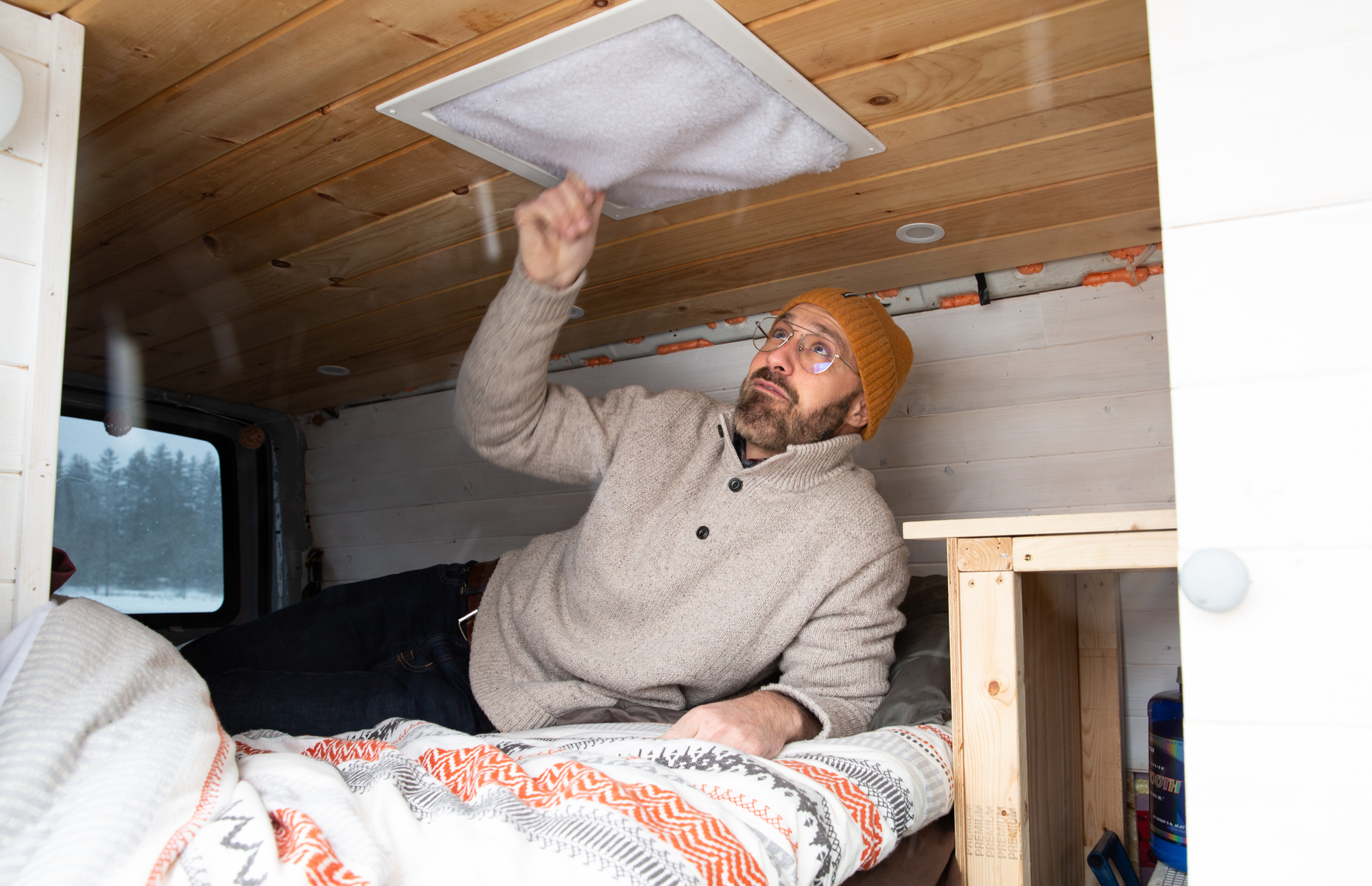 I don’t have a toilet, but it’s not an issue. I have a routine: I work at the athletic centre so I’ll get up in my pyjamas and go to school with a change of clothes. I’ll exercise and shower, then go to class. After class, I’ll go to work, and then I’ll come home in the evenings, eat, go to bed, read a book, maybe watch some Netflix. If I need a bathroom in the middle of the night, there’s usually a Tim Hortons nearby.

I have a locker at school where I keep my textbooks and electronics. I’m not too concerned about personal security. In the summer, when it got really hot, I was sleeping with the back door open. If someone wants to rob me, they can go right ahead. I have insurance. I’ll live another day. A big part of this experience for me is to put less value in possessions and more value in my education and my mental and physical health. 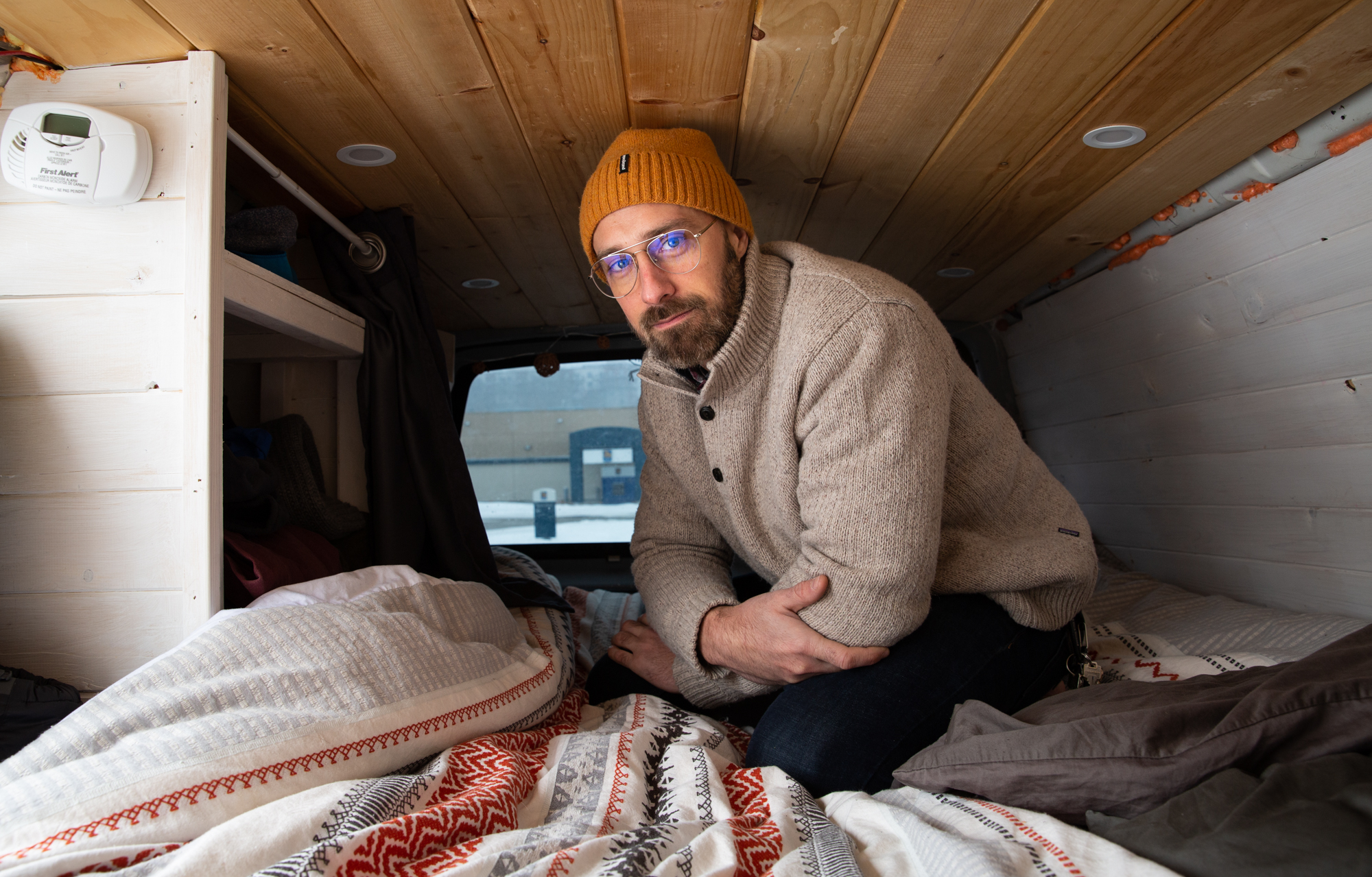 My friends and family accept my lifestyle. I’ve got a great group of friends around Barrie who let me use their kitchens. I’ll ask to hang out and make dinner on Sundays so I can prep meals for the week when I won’t have time at work. I prepare simple foods that I can warm up in a frying pan. Most nights, I go to the grocery store and buy the discounted stuff that they’re going to throw out.

People always look at me strangely when I’m in the van. I get it: the van is kind of creepy-looking because it’s black and tinted out. Sometimes, I park in rich neighbourhoods at night because they are quiet and the best places to sleep. I’ve had the police come a few times, but they’ll just run my plates or shine their flashlights. They see me sleeping and they leave. I know I’m not doing anything illegal. If someone isn’t comfortable with me being on their street, then I’ll move. 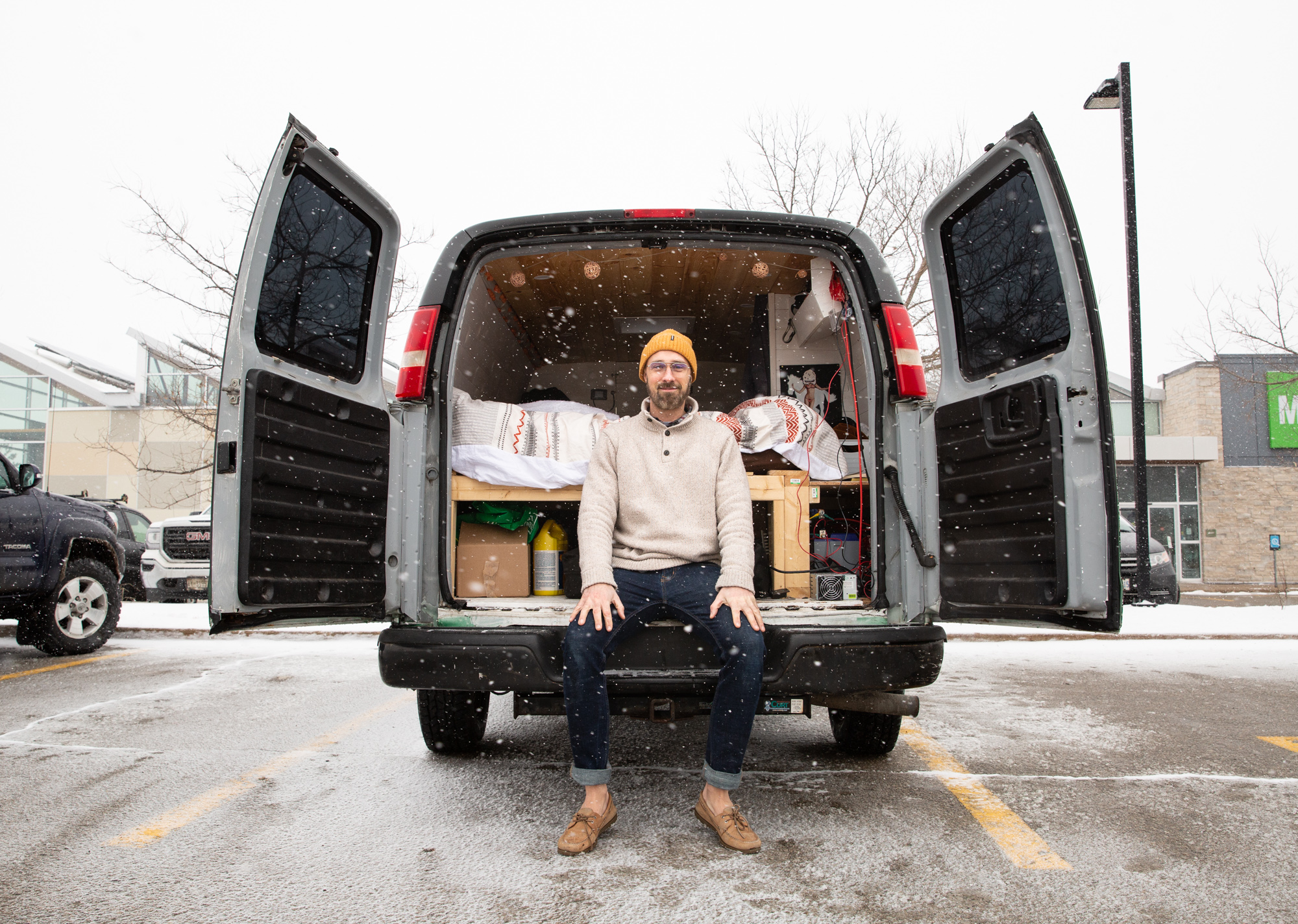 It’s nice to have this van in the summer. I can roll out a table on a trip with friends and we can stay later wherever we go climbing. I plan to live in it until school’s done at the end of this year.

I deserve a little trip, so I’m hoping to go surfing in El Salvador when I finish school. Then I’ll have my licensing exam for the massage therapy program. I’ve considered going west after that. I don’t know where I’ll end up, but living in a mobile home keeps my options open. At some point, I’d like to buy a house.