A Toronto couple bought a massive old church for $240,000. Now they live there

A Toronto couple bought a massive old church for $240,000. Now they live there 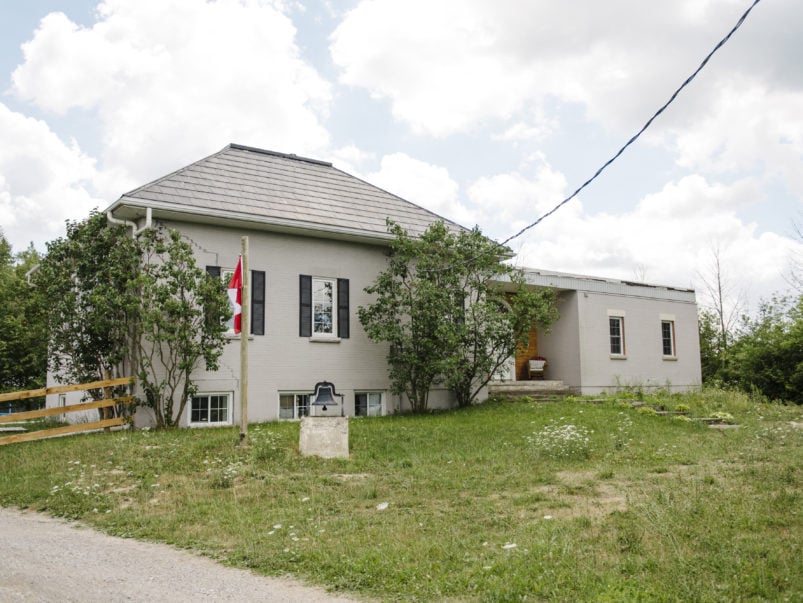 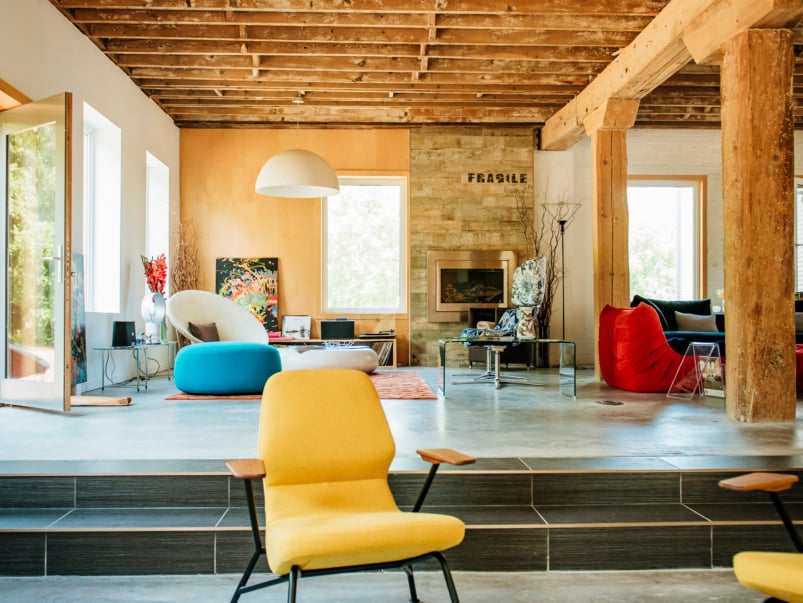 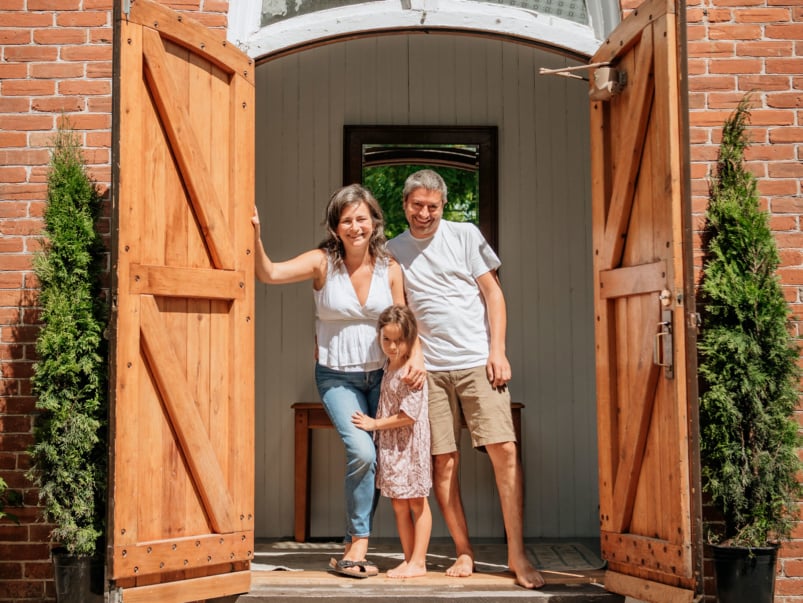 This couple bought a decommissioned Methodist church for $95,000 and turned it into a home

In March 2019, while drinking a few bottles of pinot noir at their East York semi, Jason and Dawn hatched an escape plan out of Toronto. They were done with the traffic, the outrageous cost of living and their tiny 400-square-foot backyard.

At first, Dawn wasn’t keen on leaving. But Jason swayed her by suggesting they buy a unique building with good bones—like an old schoolhouse or a factory—that they could tear up and transform into a home. A few weeks later, Dawn found a decommissioned yellow-brick church listed at $279,000 in Dashwood, a picturesque farming village two and a half hours west of Toronto on Lake Huron.

The 120-year-old church had musty carpets and more than 50 pews, complete with Bibles in the pockets. Downstairs, it had functioning water closets and a community kitchen. The windows were drafty and the floors were so sloped you could roll pennies down them.

Nonetheless, they fell in love with the arched stained-glass windows, 25-foot ceilings and the whopping 5,000 square feet of interior space spread over two floors and a mezzanine. “A church may not have been what we expected,” says Dawn. “But moving to a cookie-cutter home in the suburbs was not an option.” Jason and Dawn figured they’d adopt a reverse cottaging mindset: they’d live in the country and drive to the city for friends’ birthdays, to catch an exhibit at the ROM or attend events like Comic Con or FanExpo.

Dawn and Jason sold their semi for just under $1 million, then scored the church a few weeks later for $240,000; it was still zoned for commercial use, which might have detracted other buyers. After the purchase, they applied for a zoning change and they got started fixing it up. Their plan was to take out most of the churchy paraphernalia—extra organs, pews and linoleum floors—but leave the space open-concept and live in it during construction. They moved in in August 2019. Their dogs, Big Mac and Ishie, got a thrill from the sheer volume of space, 20 times bigger than their Toronto backyard.

Dawn and Jason enlisted The Werks Group, a renovation and construction firm out of London, to do all of the structural work, as well as the plumbing, electrical and engineering. (They also put in their own elbow grease, tiling the bathroom and painting.) There were pews to pull out, sloped floors to straighten, windows to replace—and they still needed to bring a natural gas line and water service to the main floor to build a bathroom and a kitchen. They also replaced the entire septic system to meet residential code, built a fenced area for the dogs and ditched the carpet.

The Ramsay-Browns lived through four months of chaos, alternately sleeping in the basement and the main altar area. They showered in a trailer on their lawn and grabbed clothes from a shipping container beside it that also held most of their furnishings. Dawn and Jason worked on making the downstairs livable quickly so they could set up their beds and let the workers focus on the main floor. 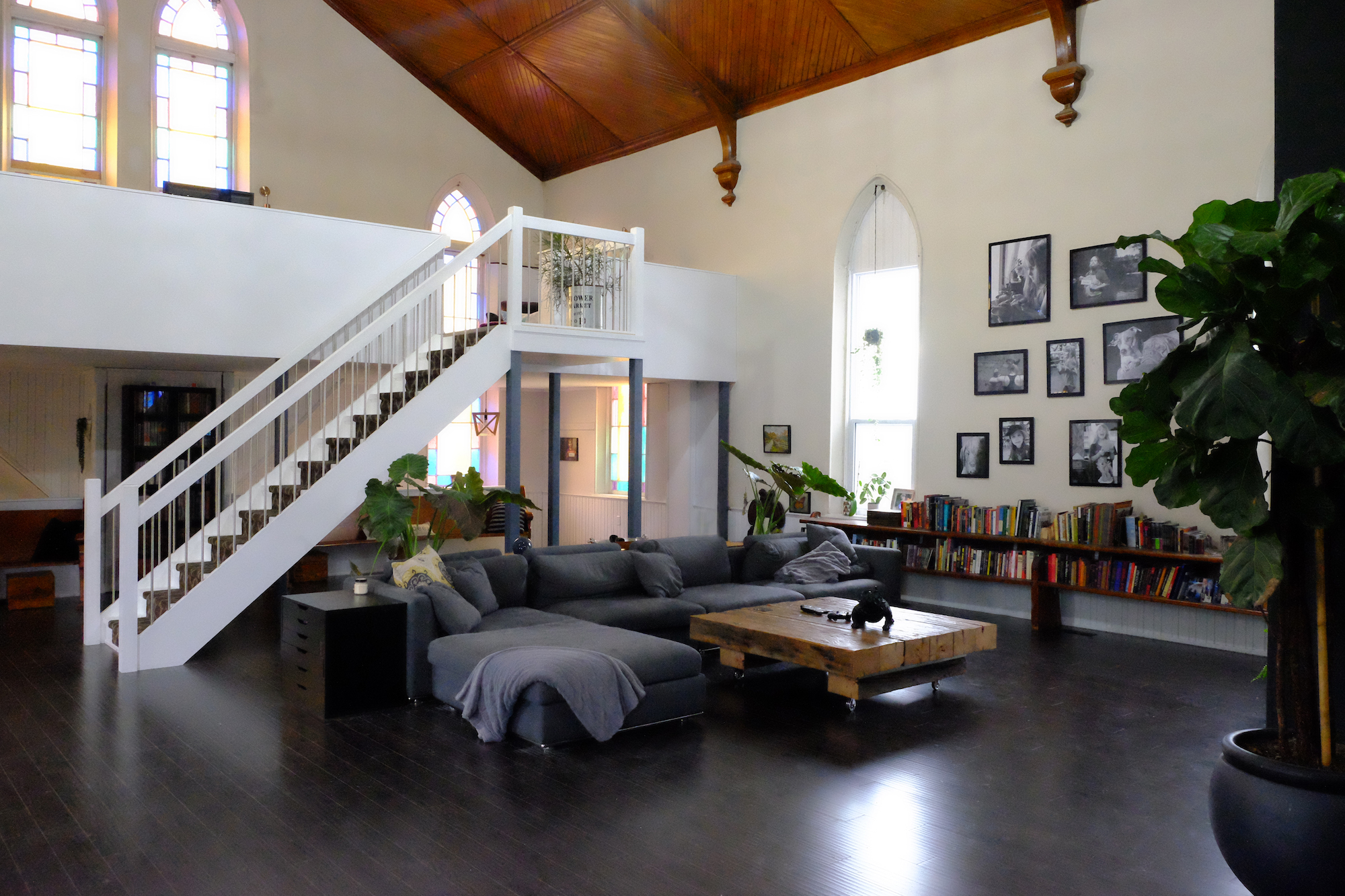 But it was all worth it: the lifestyle shift has been incredibly fulfilling. Now, they can watch the sunrise and sunset from anywhere in the house. They have two kitchens, two colossal bedrooms and a home gym. In their free time, Jason and Dawn love biking to and combing through antique markets in Grand Bend and Exeter. There are nearby turkey and pig farms that sell their wares, plus the freshest produce stands along the road. In Toronto, it used to take them 40 minutes to get to Longo’s. Abbey always wanted chickens, and their neighbour fixed up huge unused coops with seven chickens for Abbey and his son to take care of together.

And when Covid hit, the Ramsay-Browns were in the right place to quarantine: Dashwood, with a population of 400, hasn’t had a case yet. Their municipality, South Huron, has one active case at present and a cumulative case count of just over 155 since day one. “It’s just been wonderful,” says Dawn. “You couldn’t drag me back to the city.”

But the city is moving closer to them. “I have four or five Toronto friends who live 10 to 45 minutes away,” says Jason. “It’s easier to see them here because there’s not the pressure to be perpetually busy. You make plans, you keep them.” 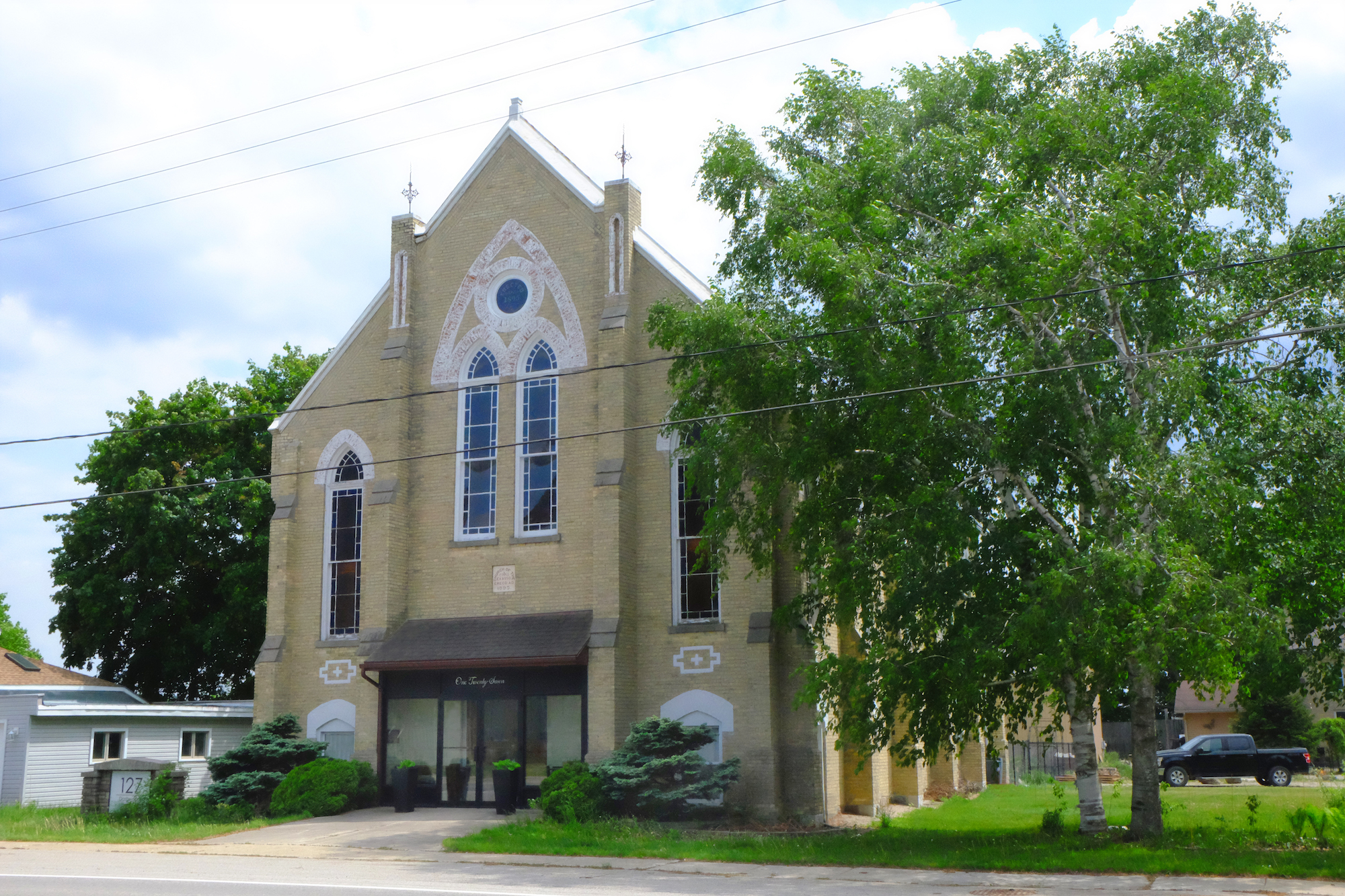 Jason and Dawn built a staircase to the choir balcony to replace the narrow twin staircases, and transformed it into a 1,000-square-foot loft bedroom. “It’s the same square footage as the entire main floor in our old house in Toronto,” says Dawn. A friend, Scott Kinnear of Tmbr, built their bed, as well as their coffee table: 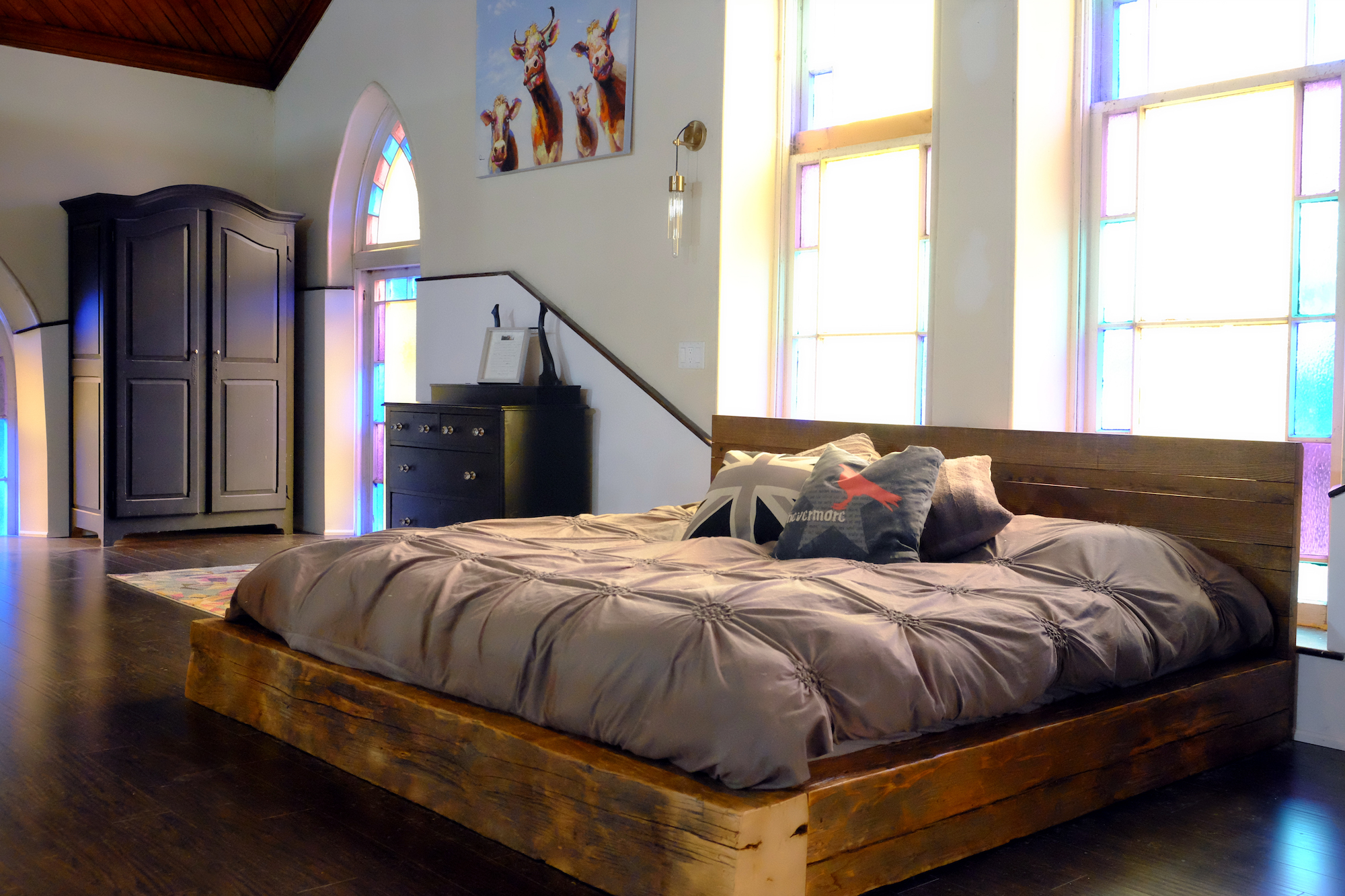 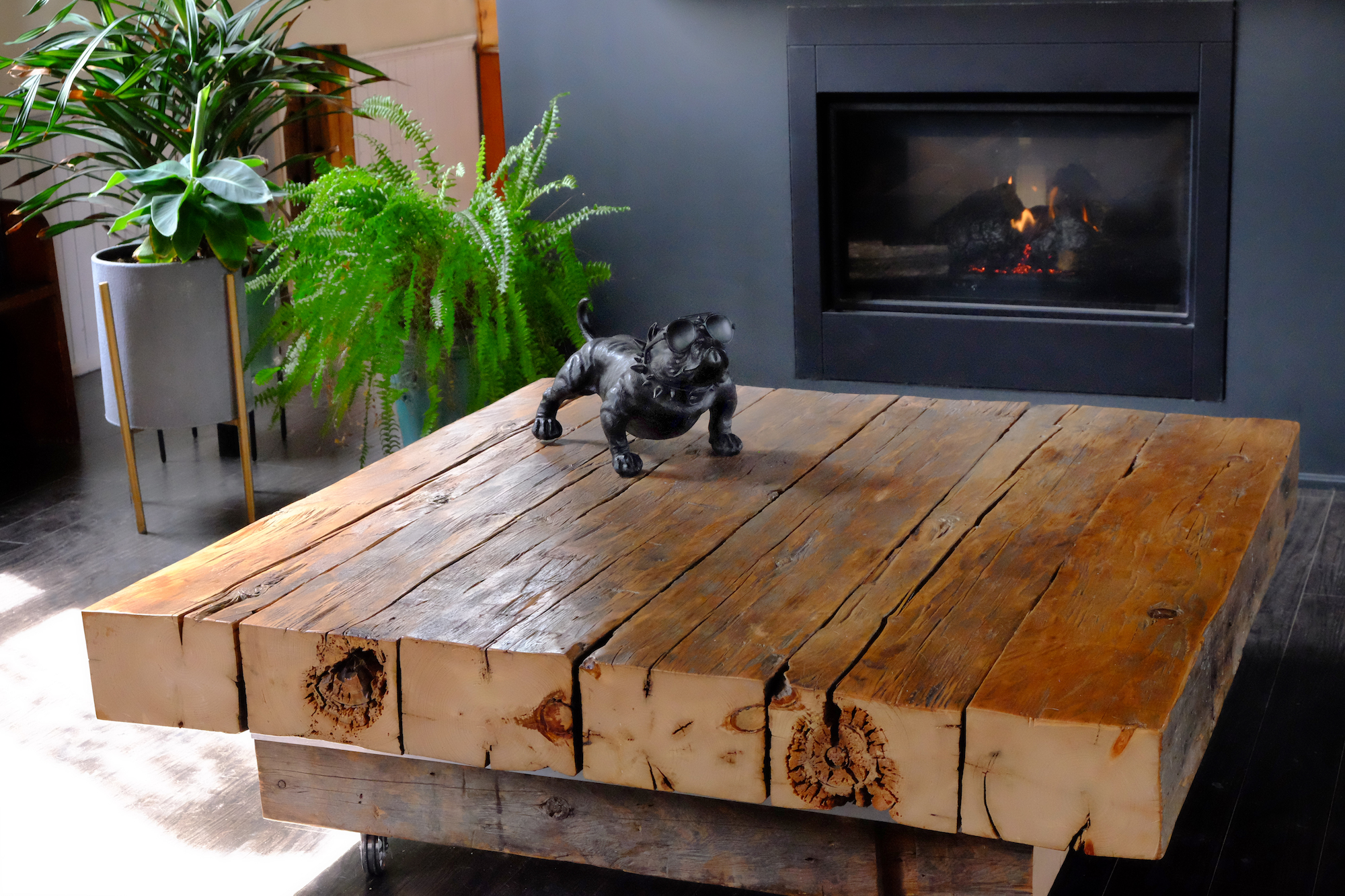 They hung a blown-up Ralph Steadman illustration from Animal Farm in the dining area. The couple used to read Orwell to Abbey when she was little: 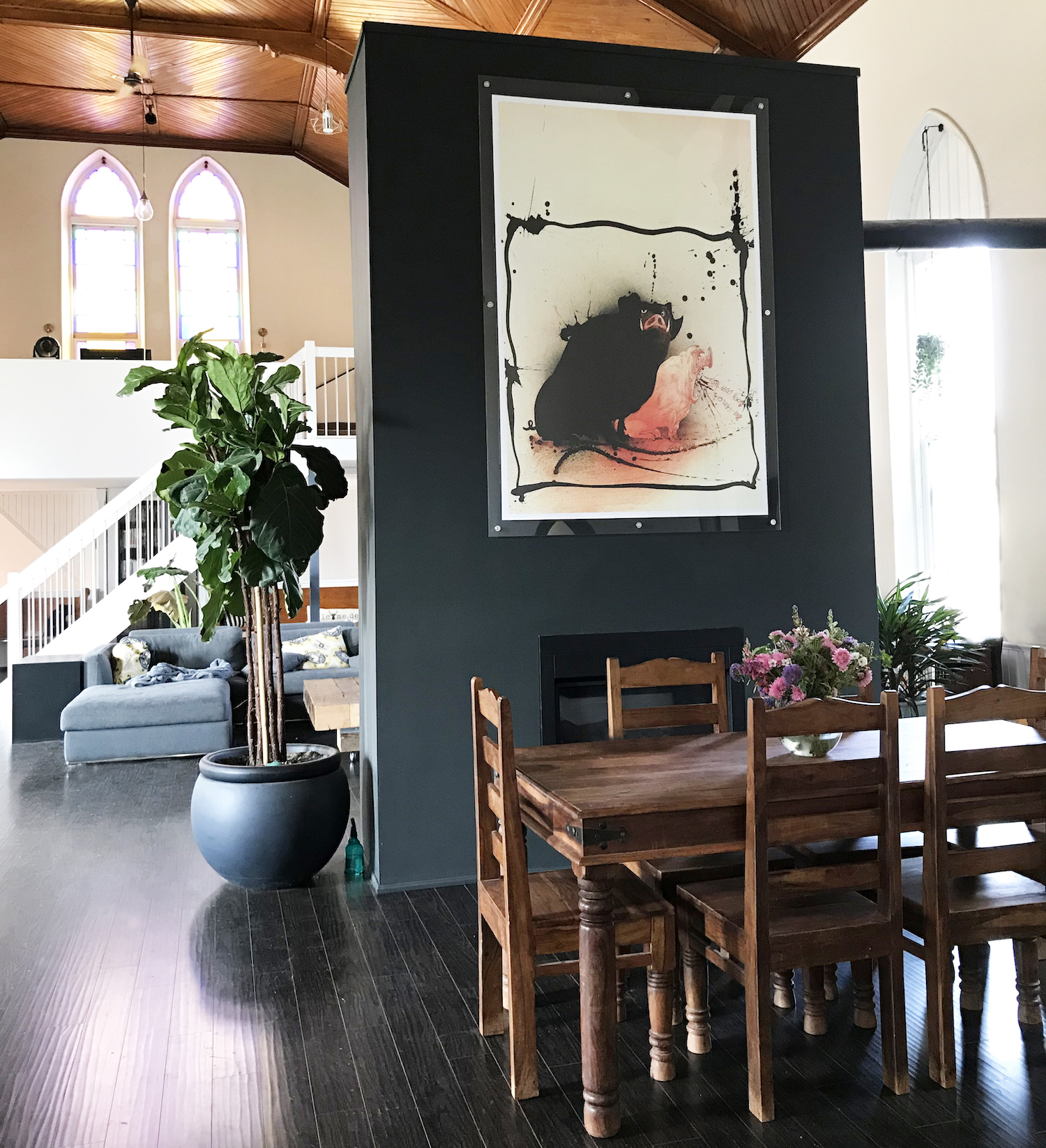 Jason loves to cook, and he was finally able to build his dream kitchen, with a commercial-grade Thor range and 25-foot ceilings. The stone countertops were delayed for four months after Covid hit: 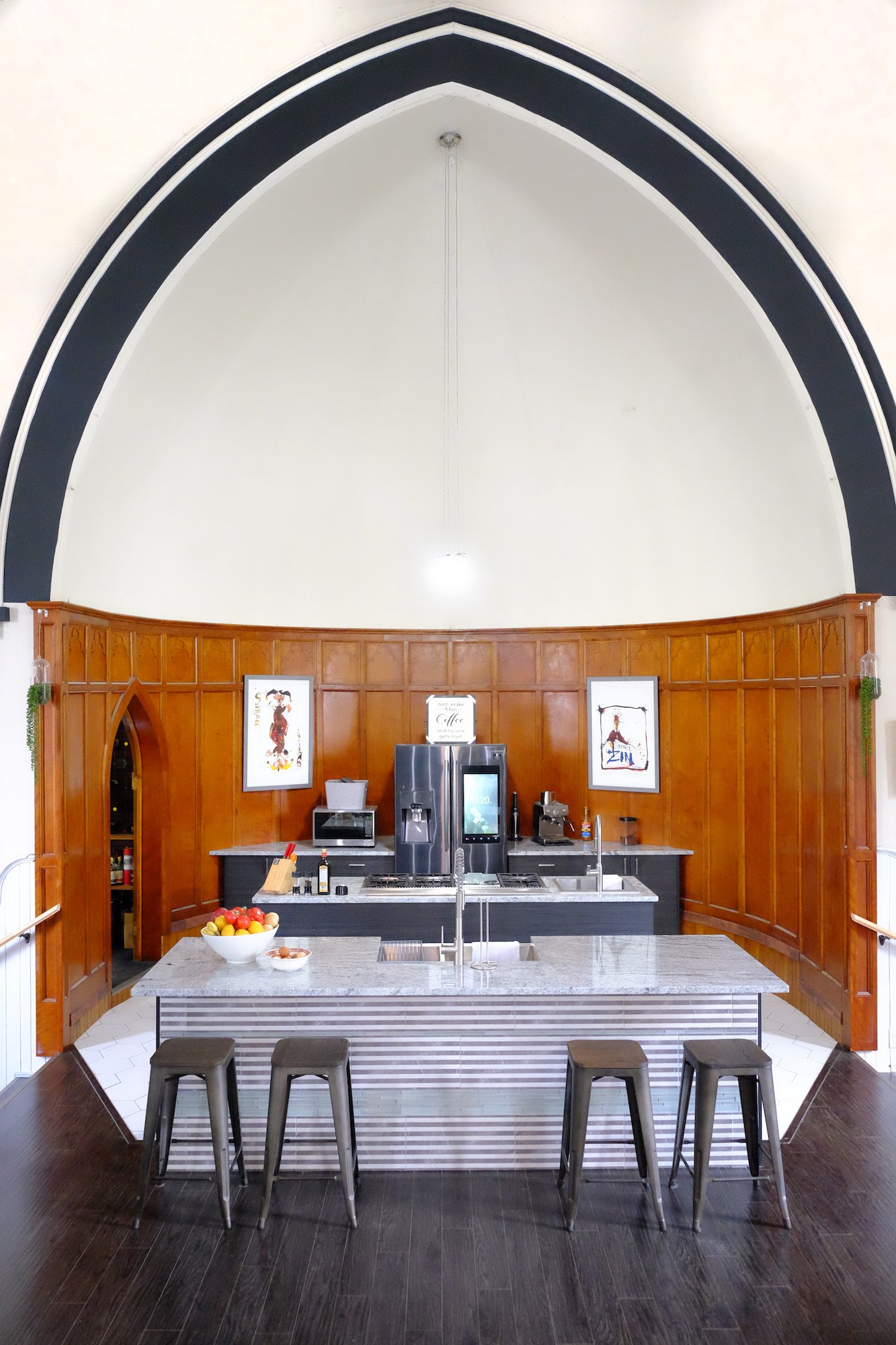 Dawn’s dad made this intricate table, which was crammed into a corner in their previous home. “It finally has a spot worthy of its beauty and craftsmanship,” says Jason: 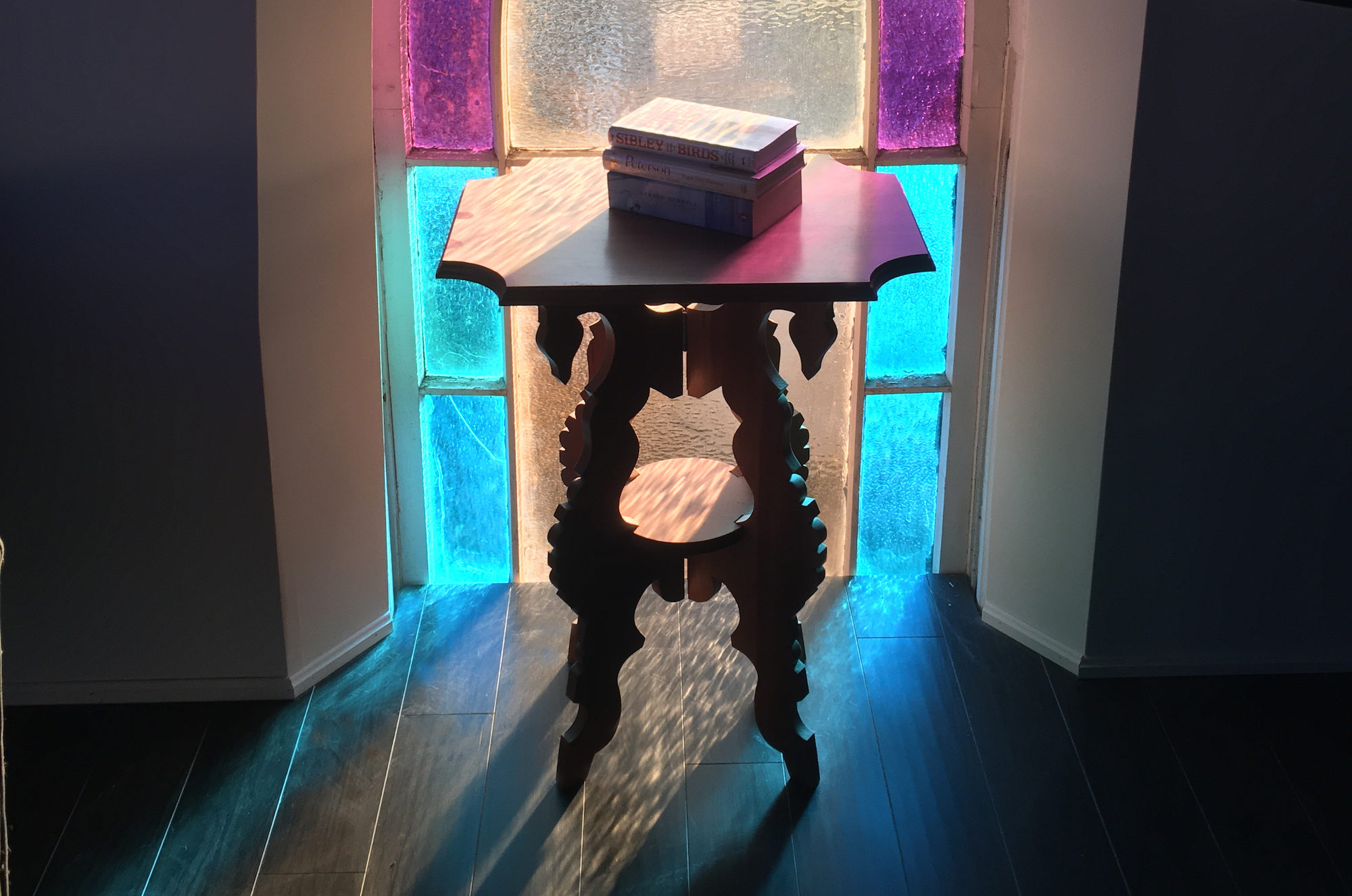 The bathroom sink was made from an old egg incubator Dawn found at an antique shop. They bought the hardware separately and had a friend drill out the fittings and resin the top: 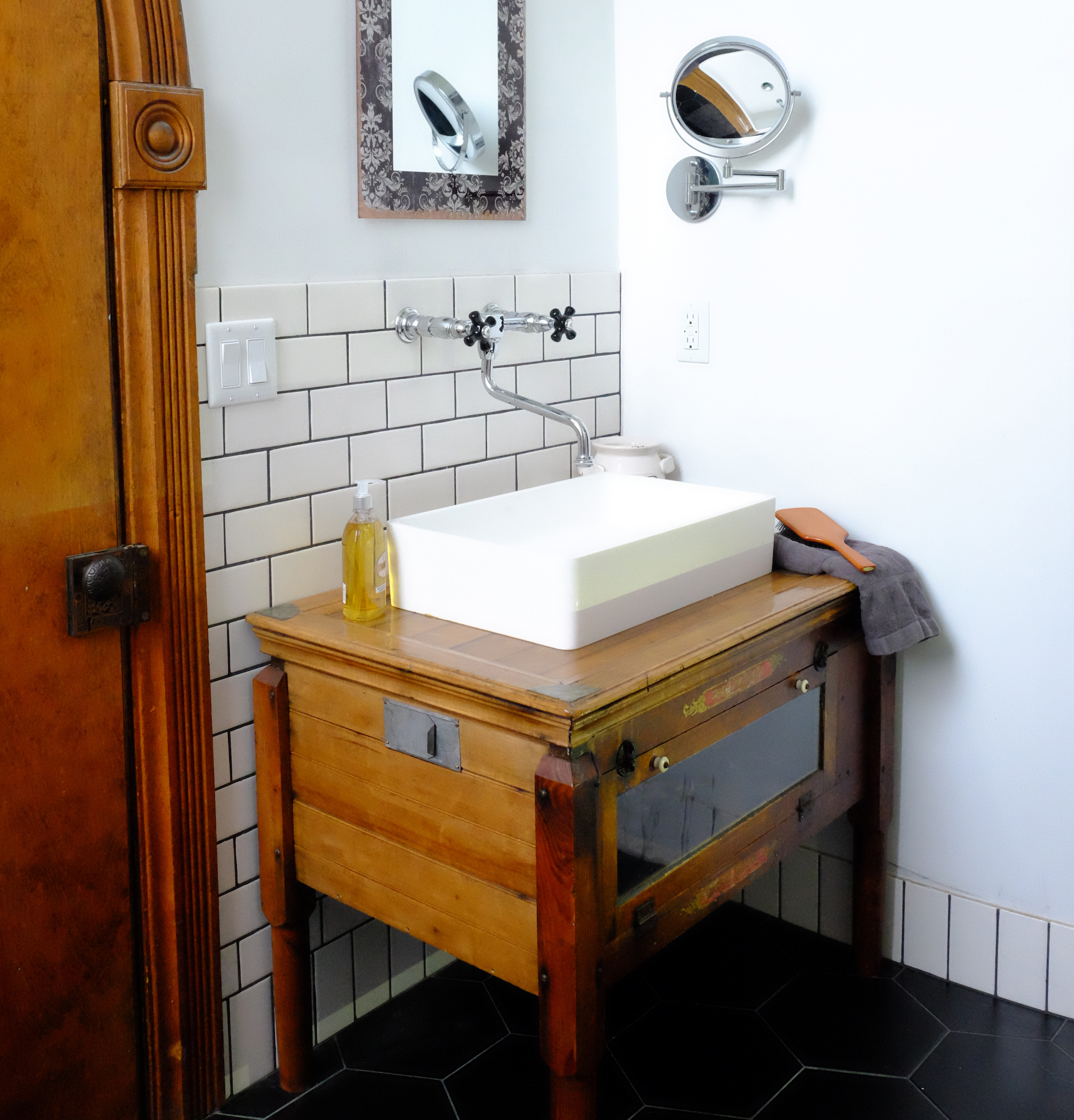 Abbey’s bedroom is downstairs, where there are six-foot-tall windows, a full kitchen, a guest room and a workout area. “She basically has a 2,500-square-foot apartment. Not bad for a 14-year-old,” says Jason: 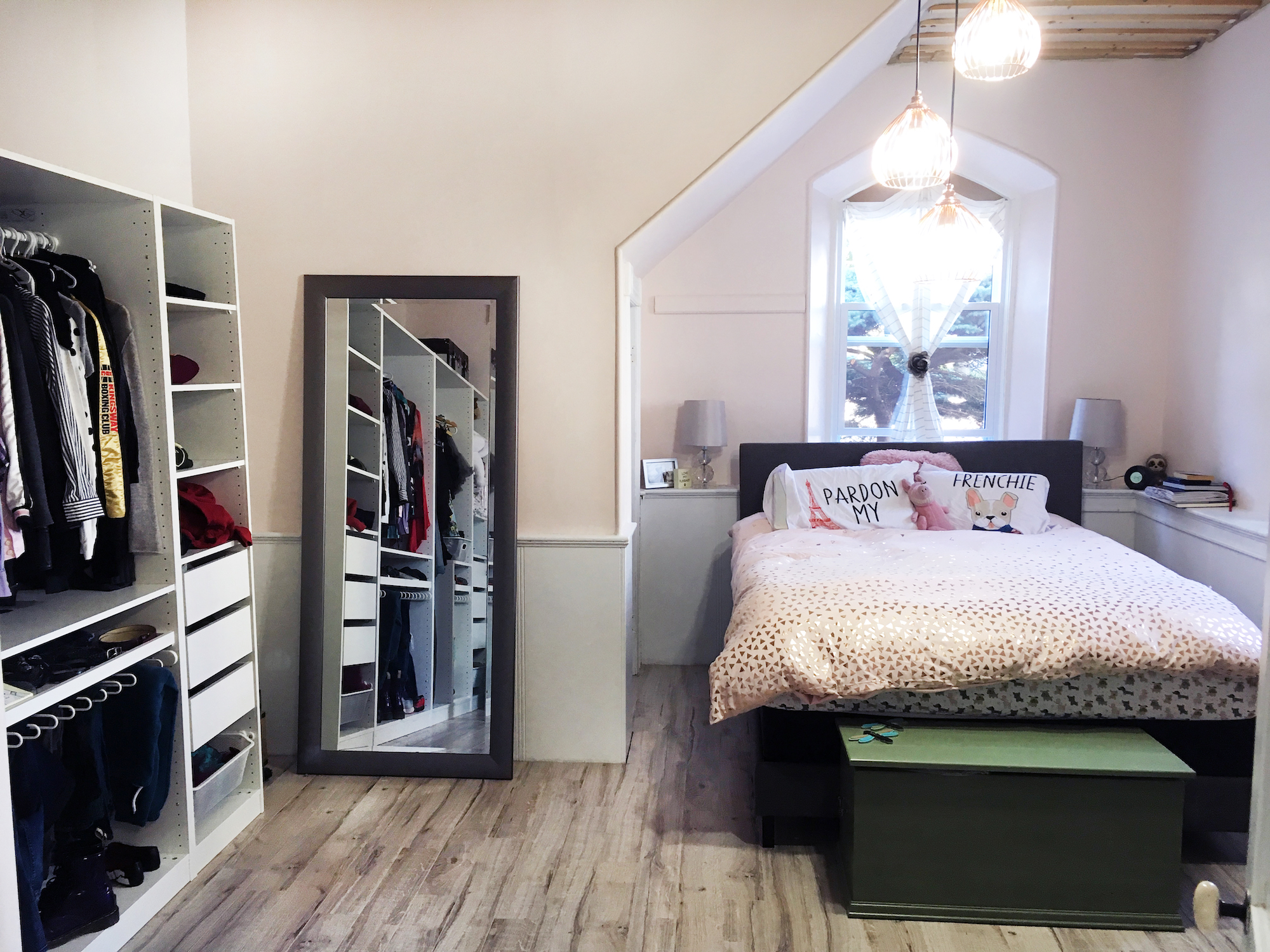 Here’s the basement community kitchen, which Jason and Dawn refurbished: 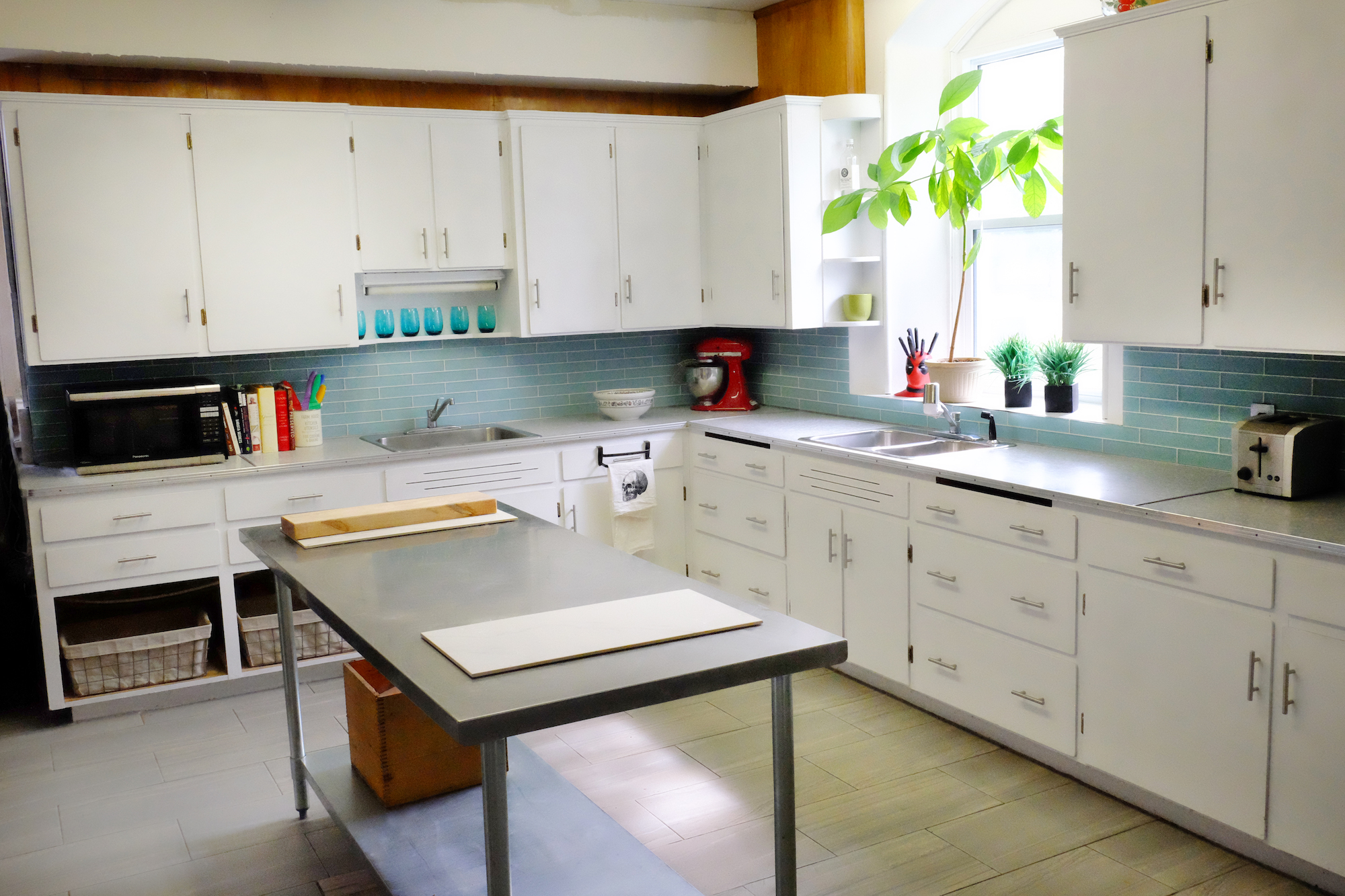 And the basement gym: 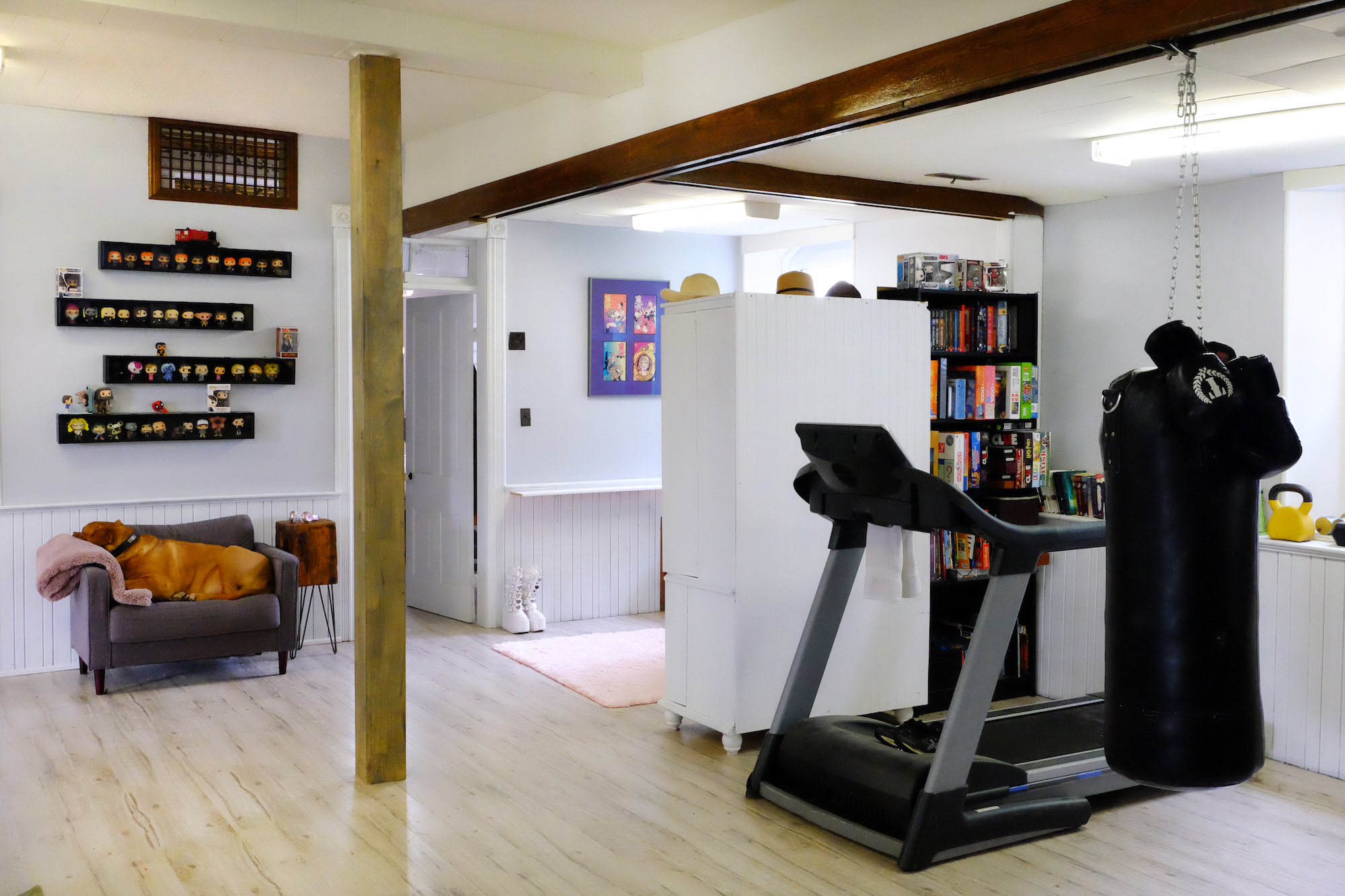 A neighbour gave the couple a historic photo of the church from its horse-and-buggy days, which they blew up into a vinyl wall mural: 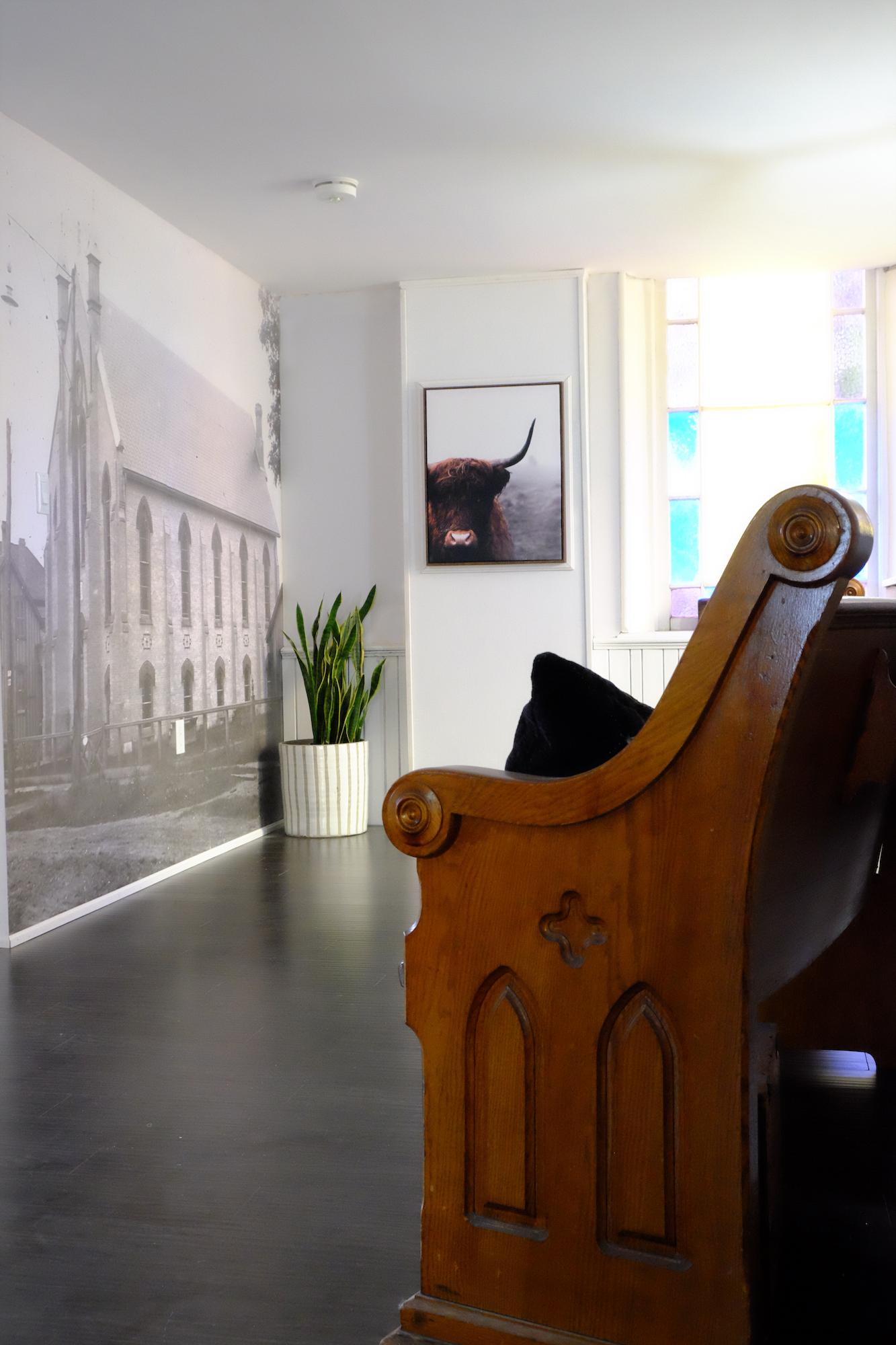 The church’s wood ceilings were in good shape, so they left them as is. “When we wake up looking at that ceiling, it’s just epic,” says Dawn: 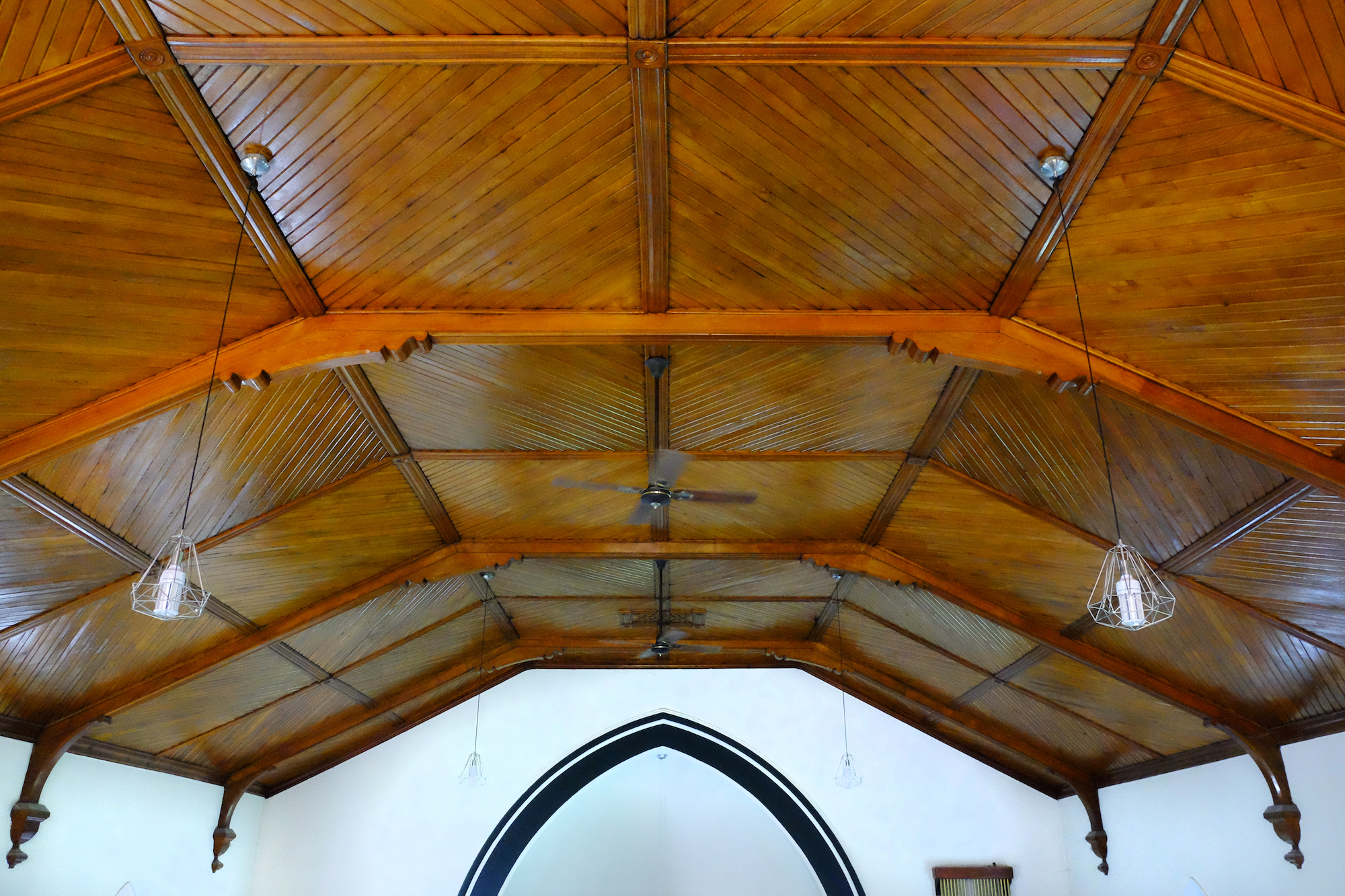 The couple upcycled many of the church’s pews into furniture: there’s the wine cabinet, a bench in the mudroom, a sewing table, a bookcase, their computer workstations and two original pews in the entranceway: 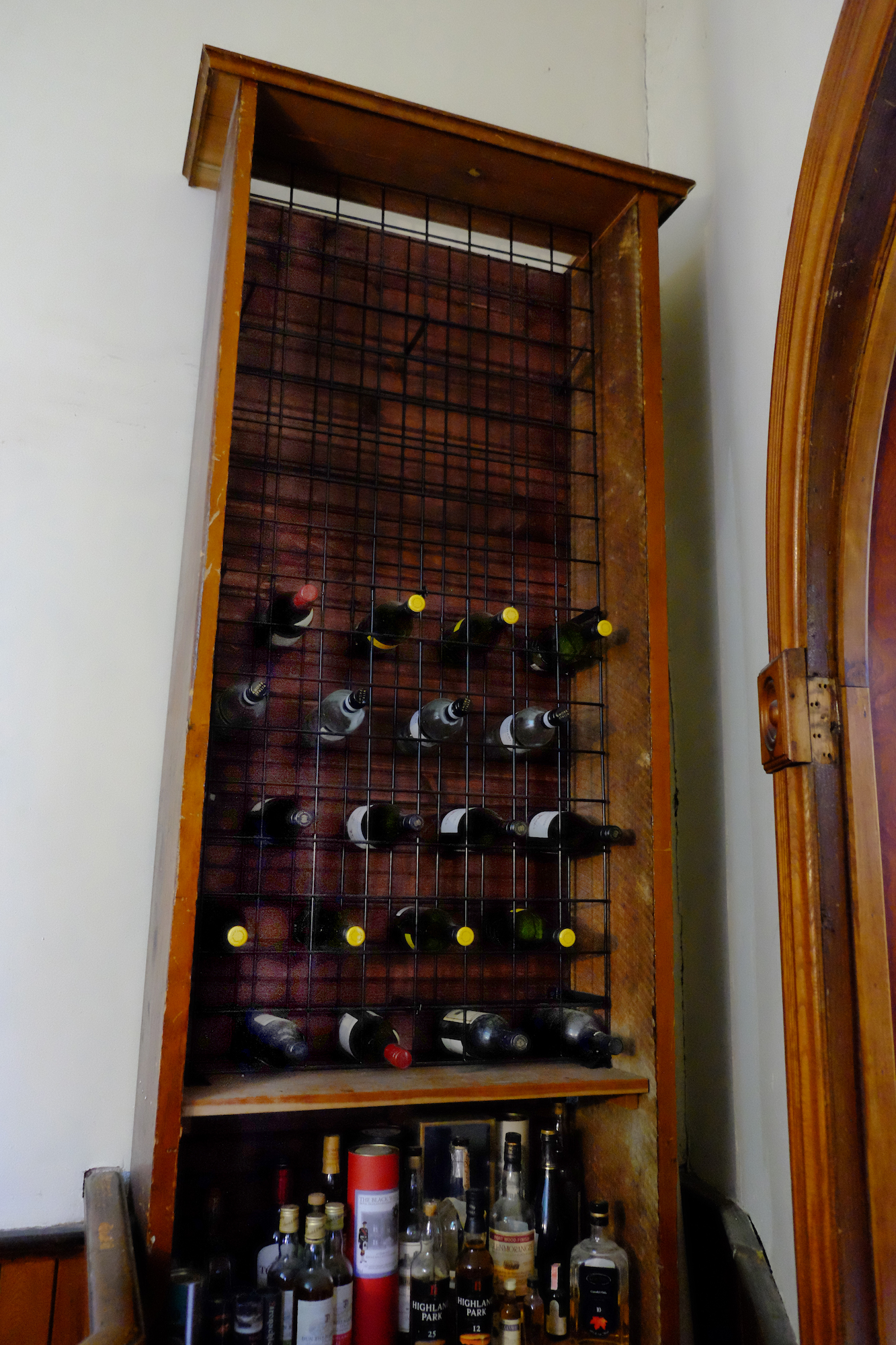 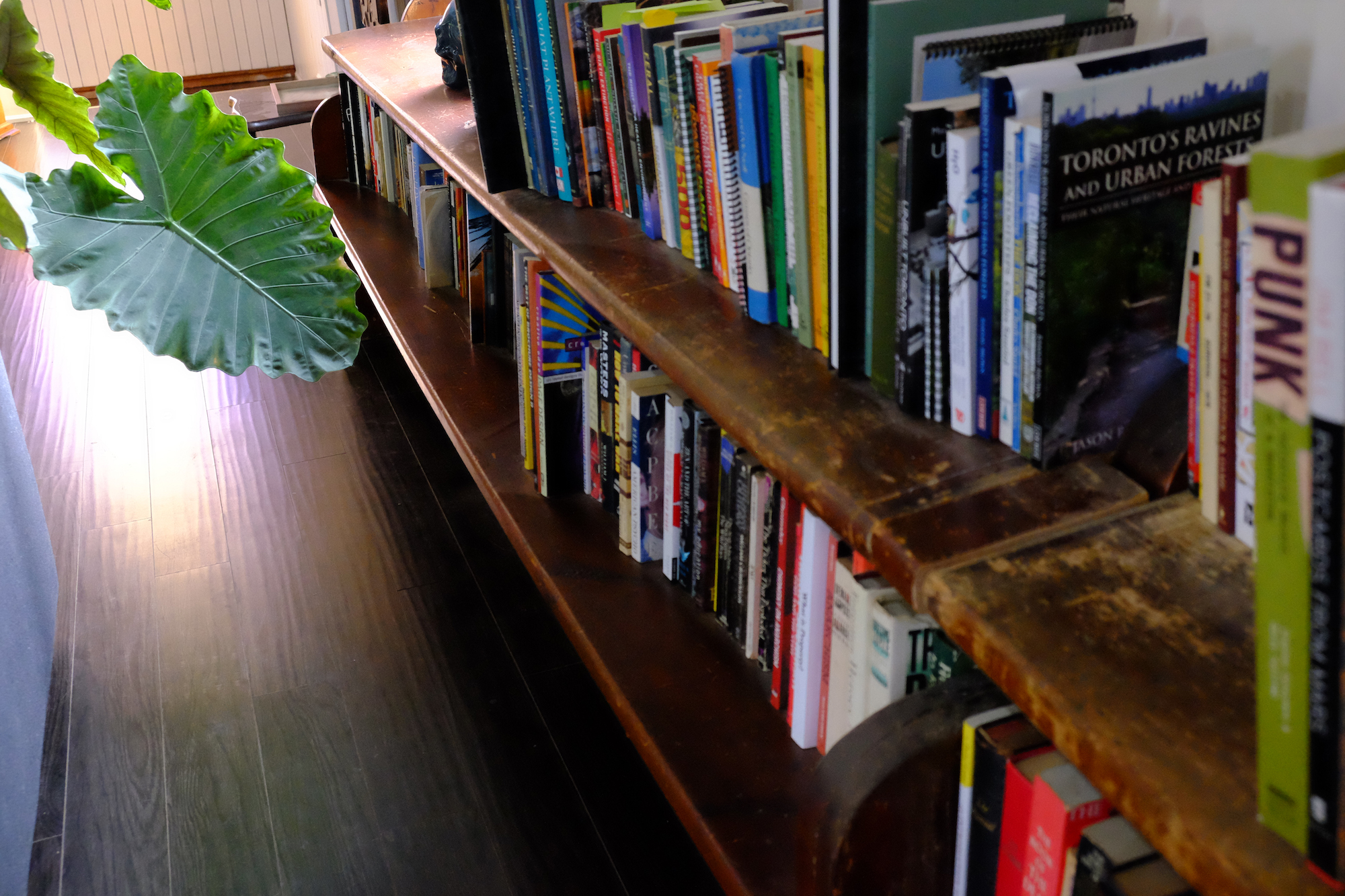