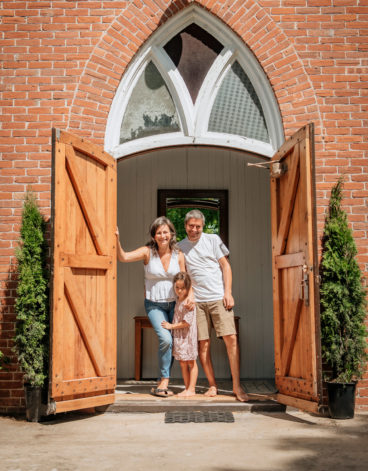 Magdalena Husejko and Franek Matlosz spent three years renovating this decommissioned Methodist church. Then the pandemic hit and they moved in

In 2017, Magdalena Husejko, a restaurant manager, and Franek Matlosz, a contracter, were living with their daughter, Emilia, in a triplex that they own in the Junction Triangle and looking for an investment property. They found a decommissioned Methodist church in Campbellford, a riverside community two hours’ drive east of Toronto, and bought it for $95,000. The 2,000-square-foot red-brick building had tons of potential, but the interior was in rough shape: it had had fake-wood veneer walls and slanted floors and a horrendous drop ceiling that looked like something out of a strip mall. Franek renovated the church over three years using inexpensive materials like concrete and plywood, spending only $50,000.

When the pandemic hit, the family decided it was a good time to get out of Toronto. They rented out a part of their triplex for the income and hunkered down in the country. For the next few months, they kept busy building a pantry, setting up a patio by the firepit, tending to their vegetable garden and watching movies with a projector. They’ve discovered a swimming spot that’s a 25-minute walk away, on Crowe River. Emilia and Frida—a mixed-breed Mexican street dog they adopted from the Toronto Humane Society a year ago—love the change of scenery. “Emilia went from being a squeamish city kid who cried at the sight of a house fly,” says Magdalena, “to running around catching butterflies and moths and releasing them in the house.” And Frida loves having space to run and explore. 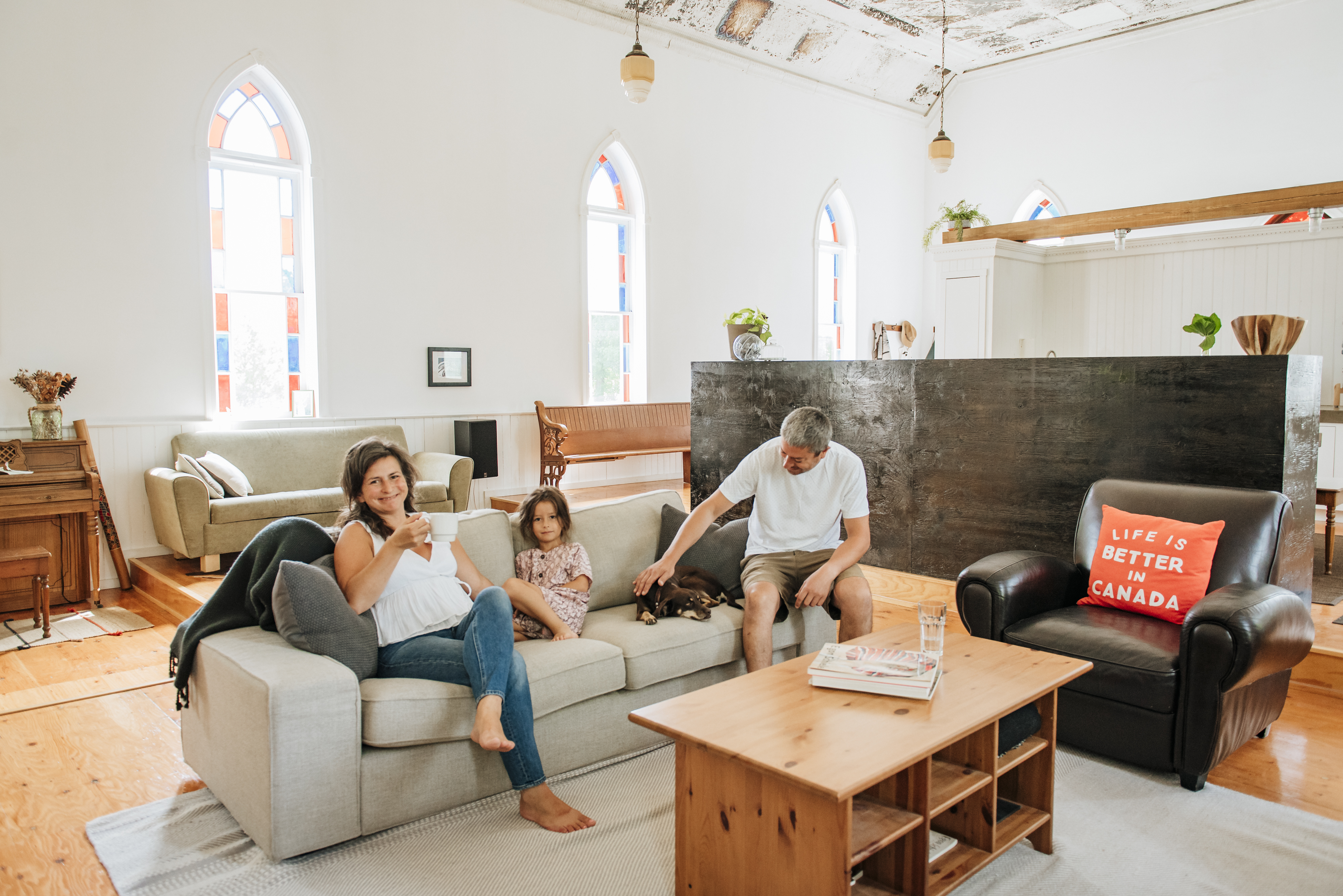 They’re a 15-minute drive to downtown Campbellford, which sits right on the Trent-Severn Waterway. Magdalena loves the natural beauty of the town, and Franek says the cream puff doughnuts at Dooher’s bakery are habit forming. It doesn’t have Toronto-calibre restaurants (yet), but Prince Edward County is only an hour away.

Visiting city friends sometimes stay over to decompress. “I have one friend who was creeped out at the thought of sleeping in a former church,” says Magdalena. “But this was nothing like the Eastern European churches of my childhood, where there was a bleeding Christ in every corner. This just feels like home.”

Here’s what it looks like from the outside. They left the brick façade just as they found it: 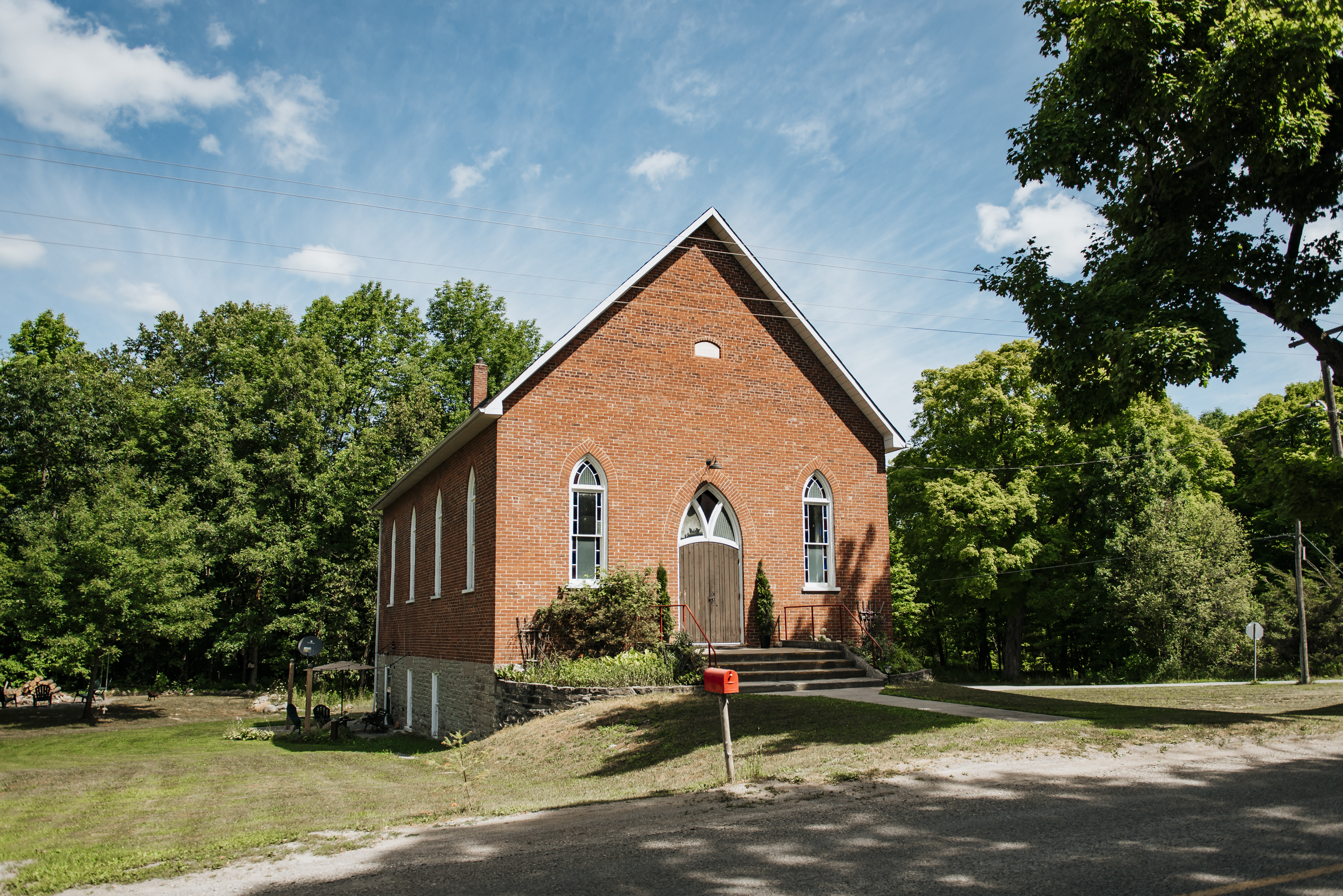 Pendant lights dangle from those 20-foot ceilings, and the pool table gets a lot of use when friends and family drop by: 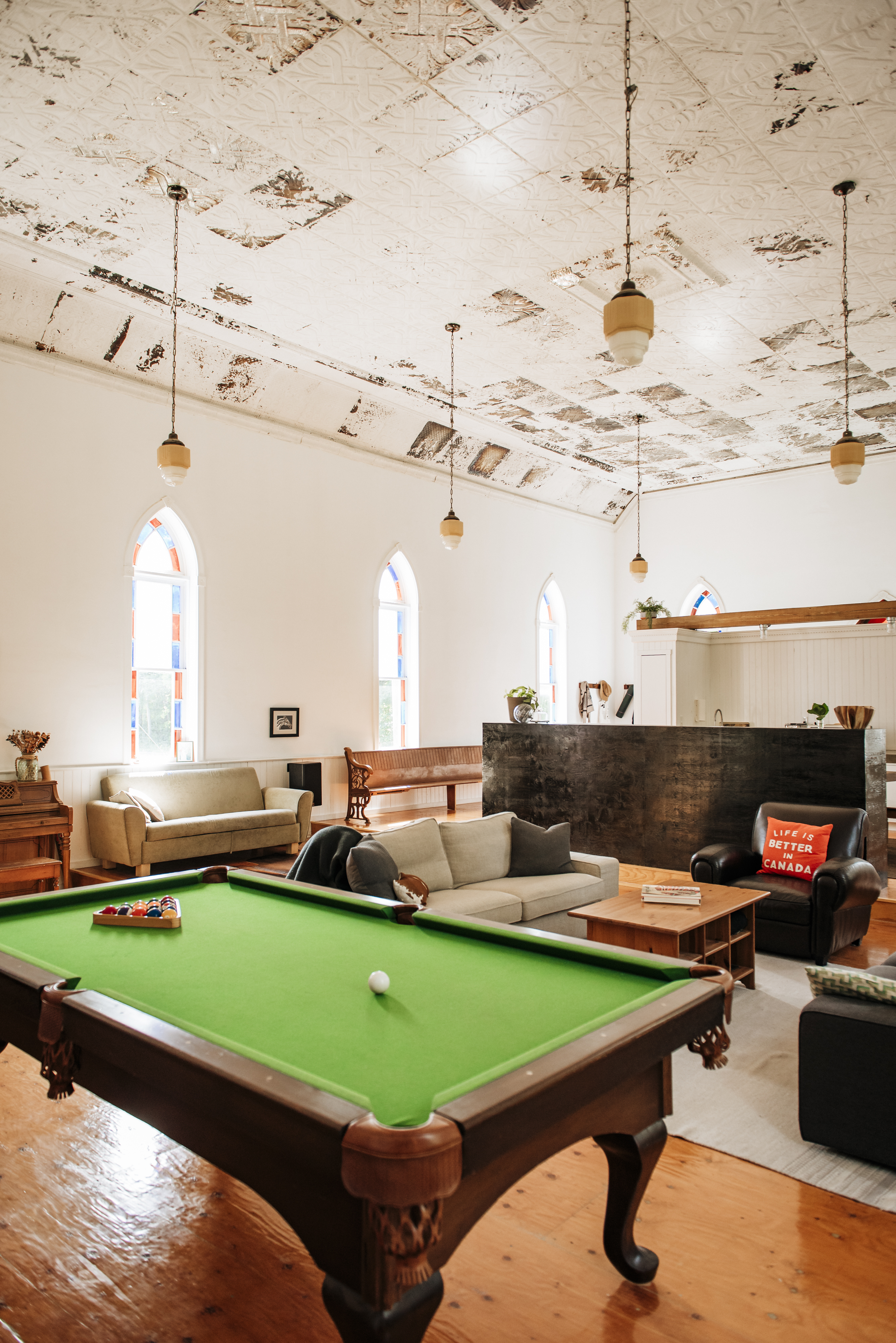 The stained-glass windows were mostly in good shape, save for four pieces of glass that Magdalena and Franek replaced: 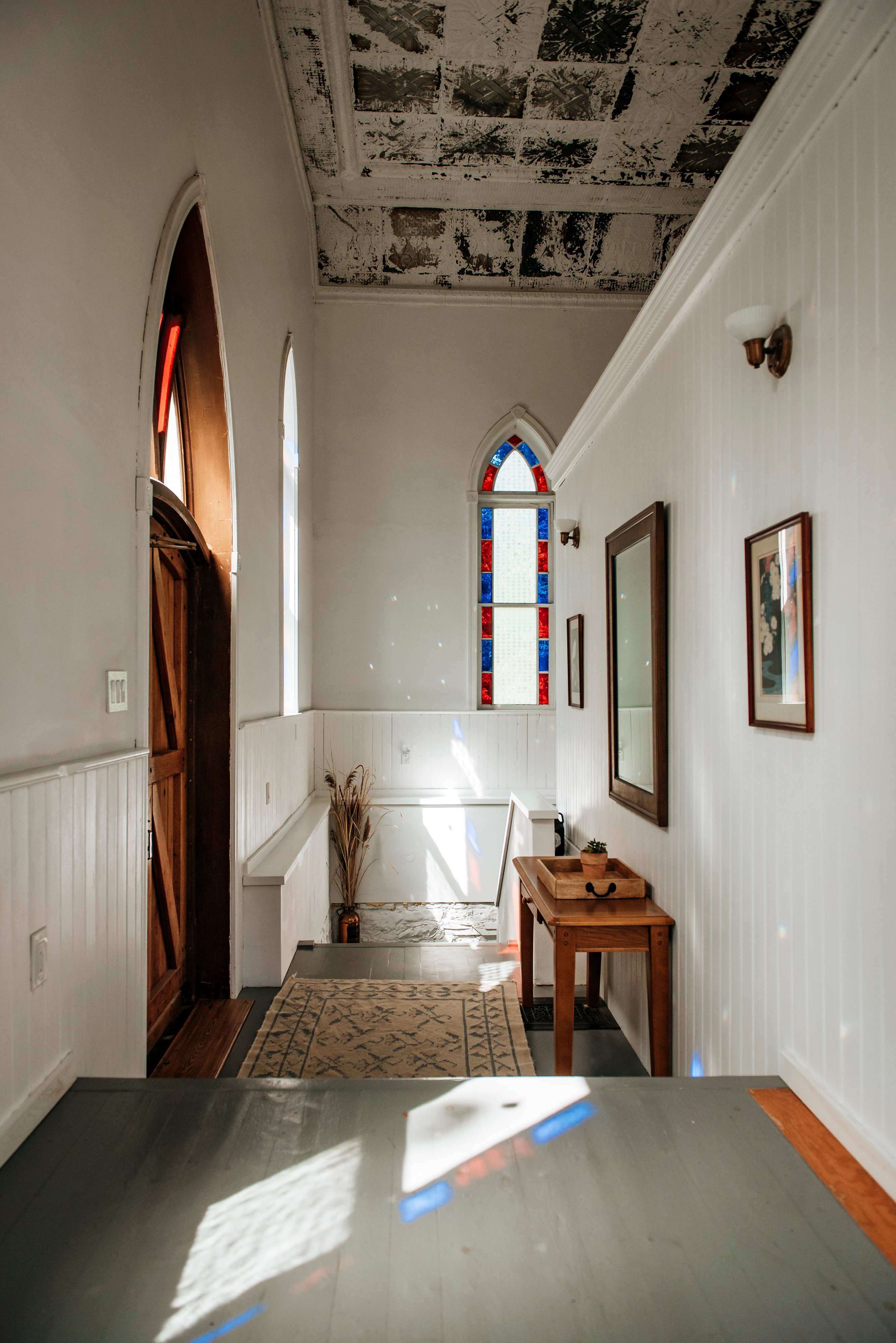 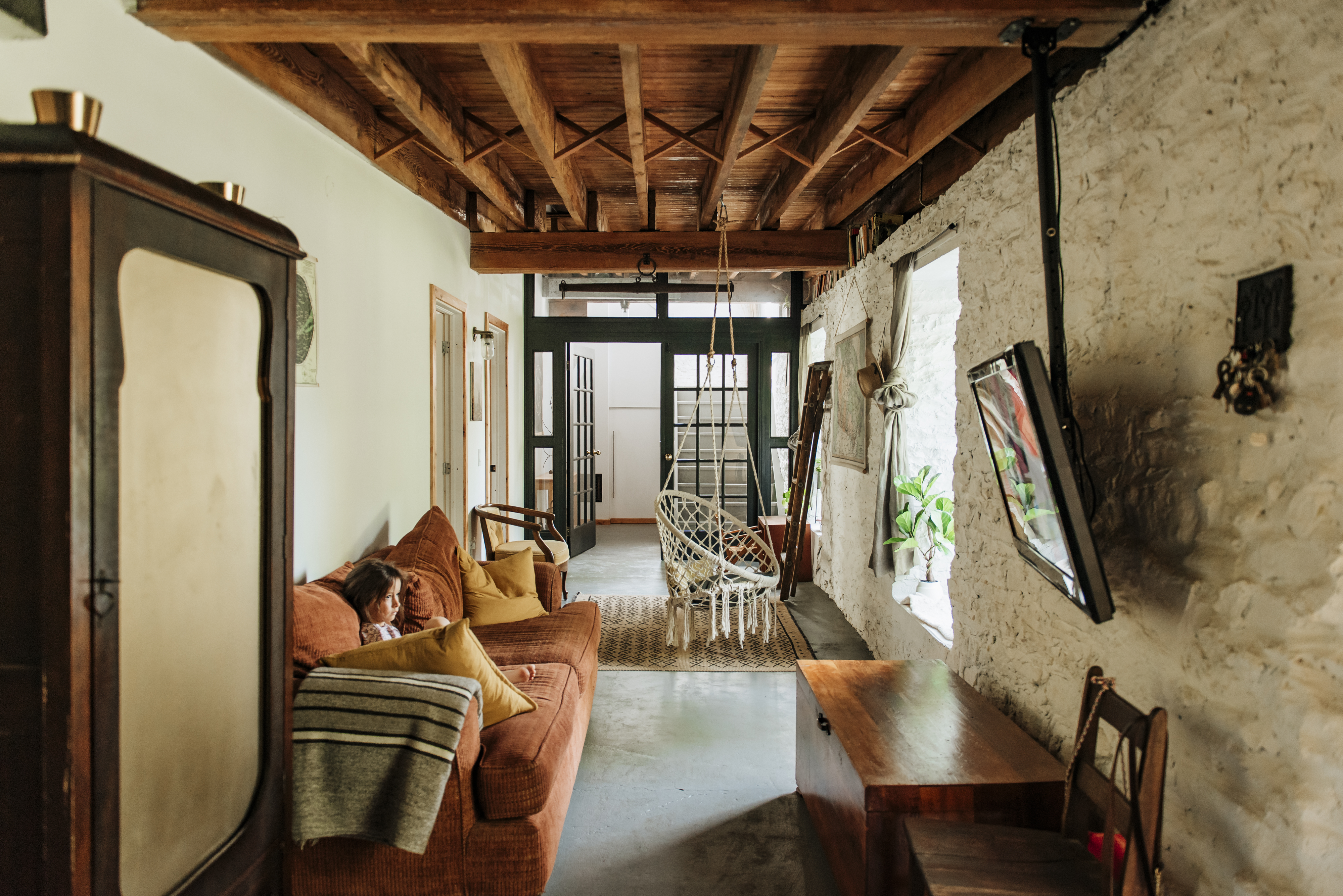 Magdalena bought this eight-foot-long table for $10 from a Queer as Folk set. Her brother Mike Husejko, a cabinet-maker, built the kitchen, and Franek made the poured-concrete countertops with his cousin: 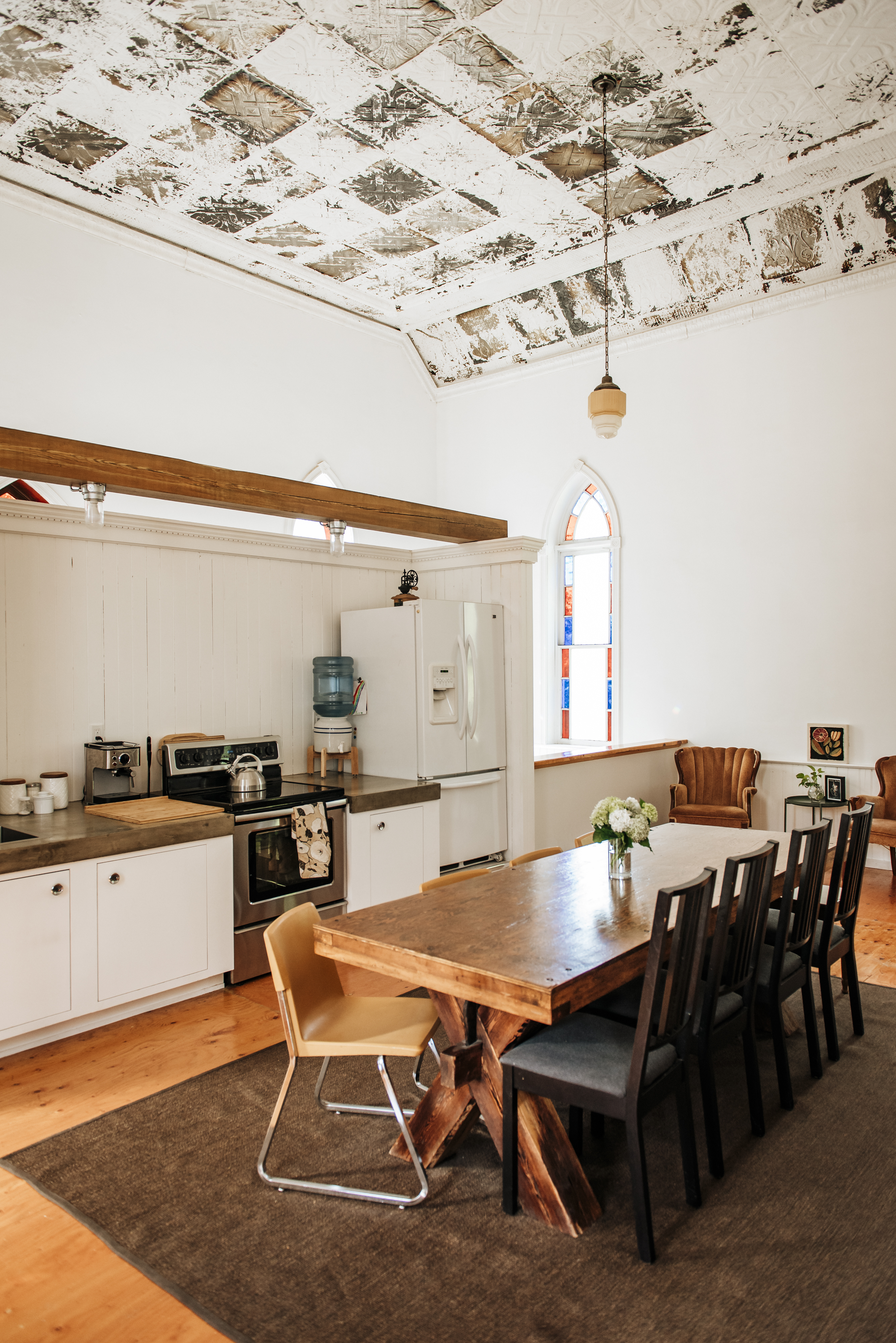 When they bought the place, the stone walls were painted an intense lime green. Franek stripped them and repainted them white. He also uncovered the giant Douglas fir joists and beams: 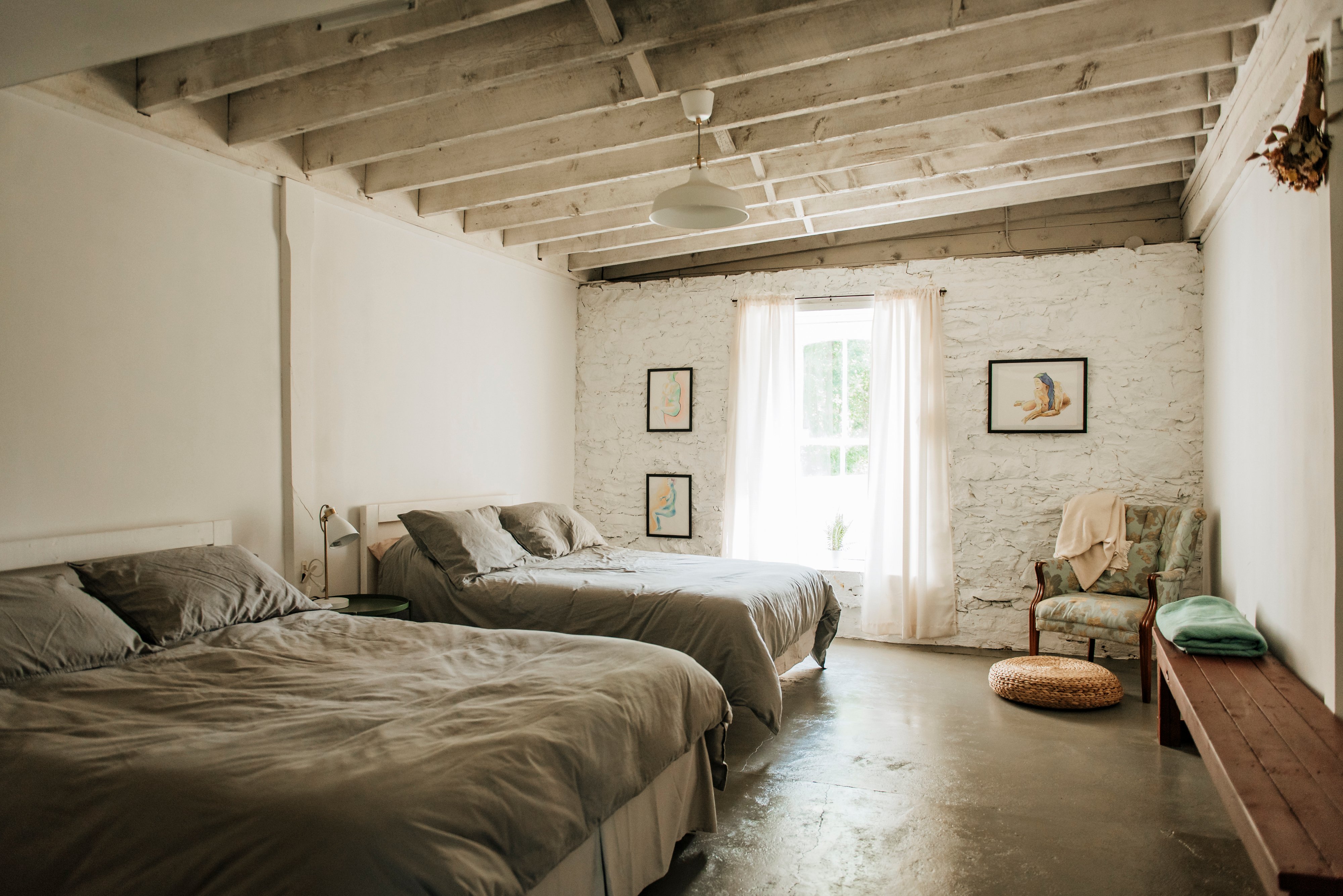 When Franek tore down the drop ceiling, they discovered a stone ledge they’re now using as a bookshelf. They access the space with that antique ladder: 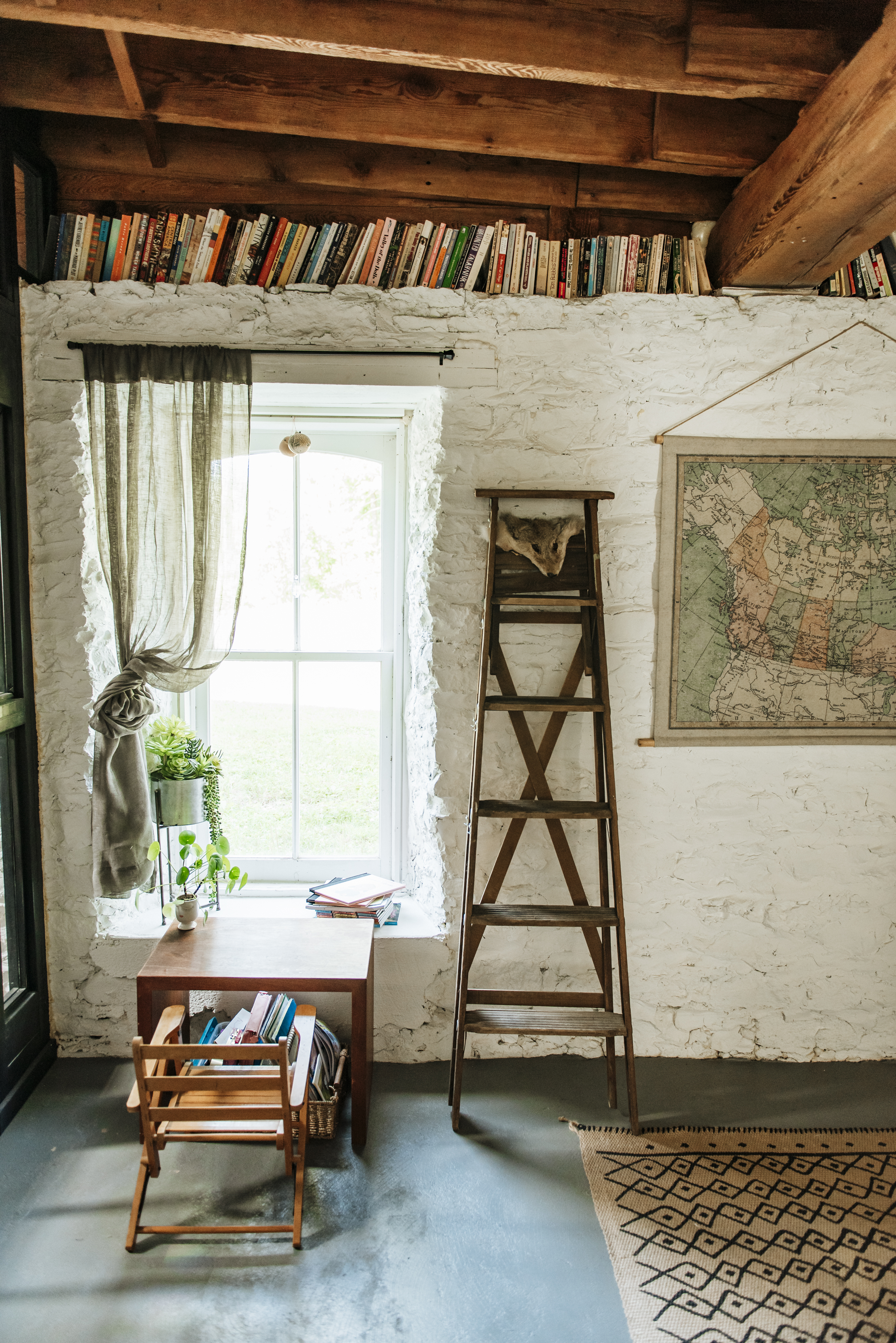 This is Emilia’s room. The bunk beds came from friends whose kids outgrew them, and the wingback chair is from Habitat for Humanity ReStore: 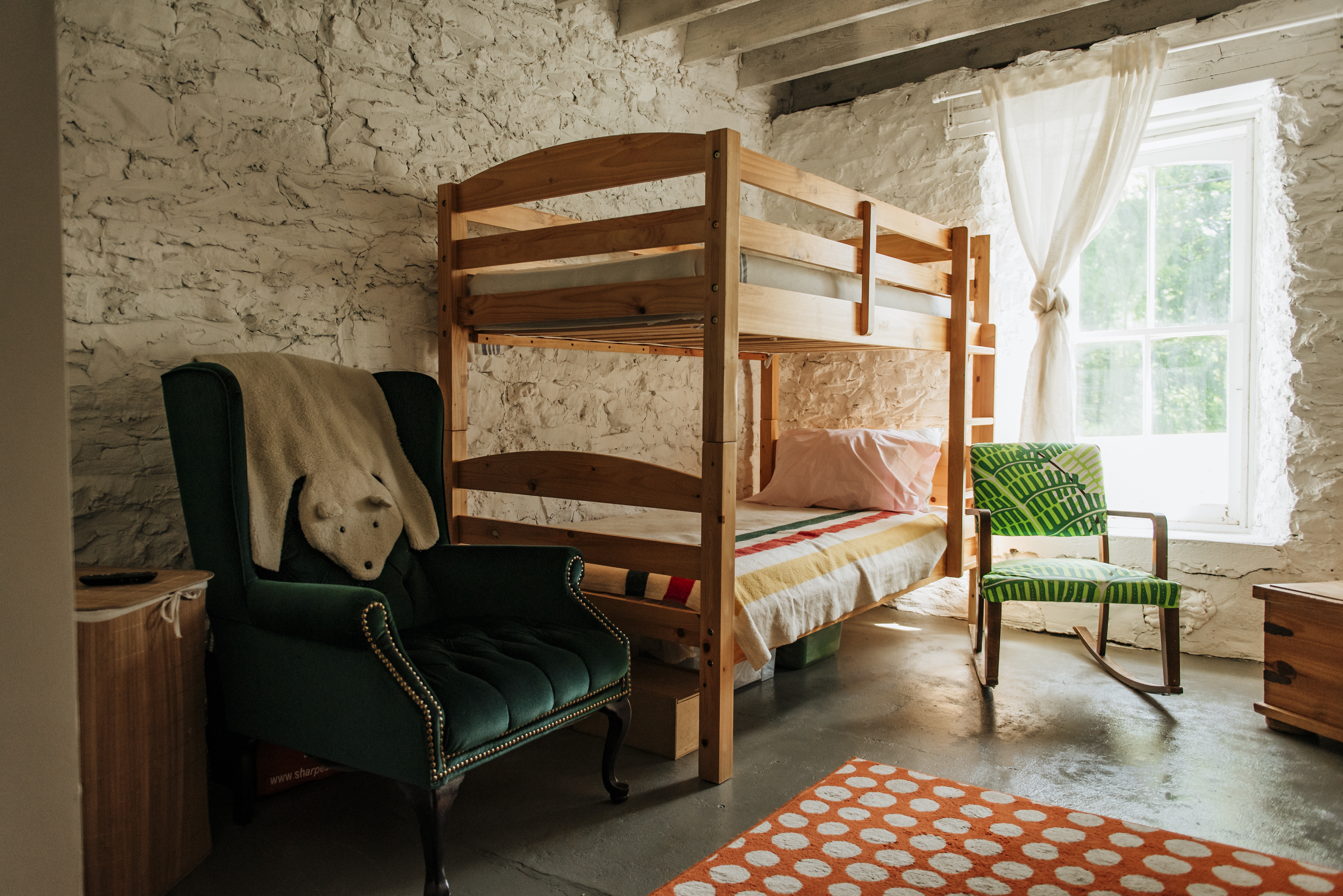 They made the bathroom vanity from an old art deco dresser also from Habitat ReStore: 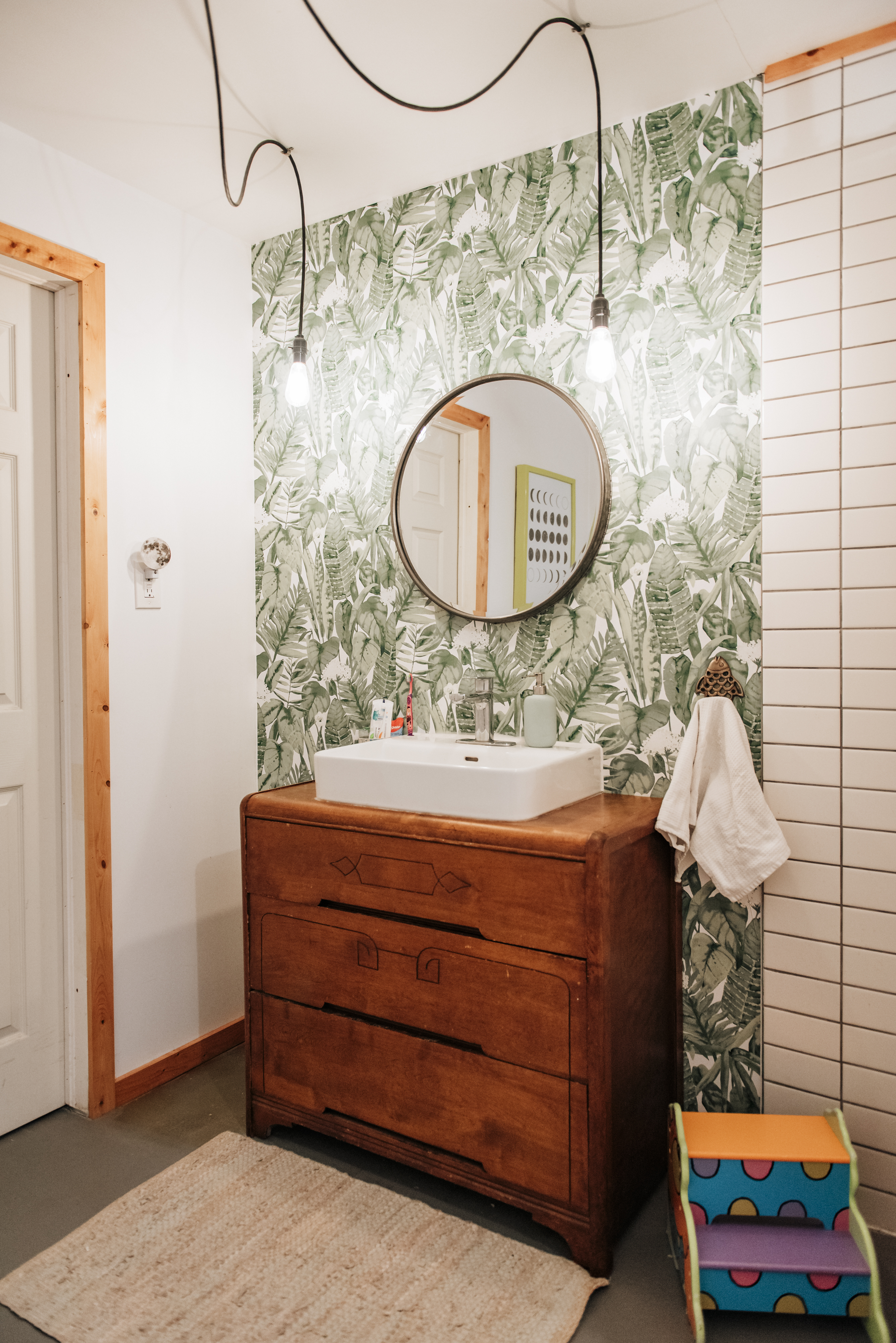