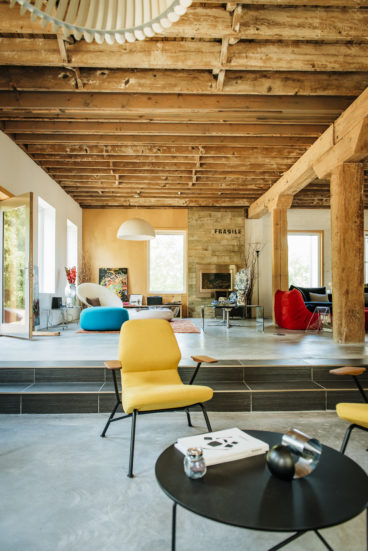 This former canning factory in Grafton was a total dump when Cliff and Yasmin Smith found it. It had no doors, windows or flooring. Now, it’s the perfect pandemic retreat

Back in 2005, Cliff and Yasmin were living in a renovated Edwardian near Avenue Road and Dupont, and searching for a country property they could visit on weekends. Yasmin wanted an expansive view, but Cliff just wanted something that had running water. They struggled to agree on a place, until they happened upon this abandoned two-storey canning factory in Grafton. It operated as the Grafton Station Cannery from the turn of the 20th century until the 1950s but had been sitting empty for decades.

“It was a total dump,” says Cliff, completely overgrown with no doors, windows or flooring. But as soon as they stepped inside, they were blown away by the sheer size (almost 6,000 square feet) and the incredible light streaming in. It reminded them of the ancient properties they’d seen on a trip to Tuscany, and they knew they’d be able to transform it into a gathering place for their family.

They instructed interior designer Jacques Dinel to draw up plans for a rustic yet contemporary space that retained as much of the previous structure as possible. Over the next few years, they cleared out all the leftover factory parts, replaced the roof, reinforced the existing structure, insulated the interior walls, installed new windows and doors and poured concrete flooring. They preserved the original brick façade and added a two-storey corrugated aluminum entryway at the front of the building. Inside, to give the illusion of rooms without adding walls, they created multiple staggered levels for the kitchen and dining area, the den, a music zone and even a Zen meditation area.

Midway through the six-year renovation process, Cliff, then a graphic designer and art director, realized he couldn’t afford to furnish the place in the way he wanted to. So, he decided to switch careers, opening up a furniture showroom, Augustus Jones, in Riverside in 2015 selling hard-to-find European pieces. Now, the Grafton property is furnished almost entirely with samples from his store.

Since the onset of the pandemic, they’ve remained in the city but still head up to the cannery on the weekends, taking walks by the pebble beach or the nearby bird sanctuary, and are looking forward to Christmas, when, Covid-willing, the space will be filled again with the familial bustle of their kids and grandkids. 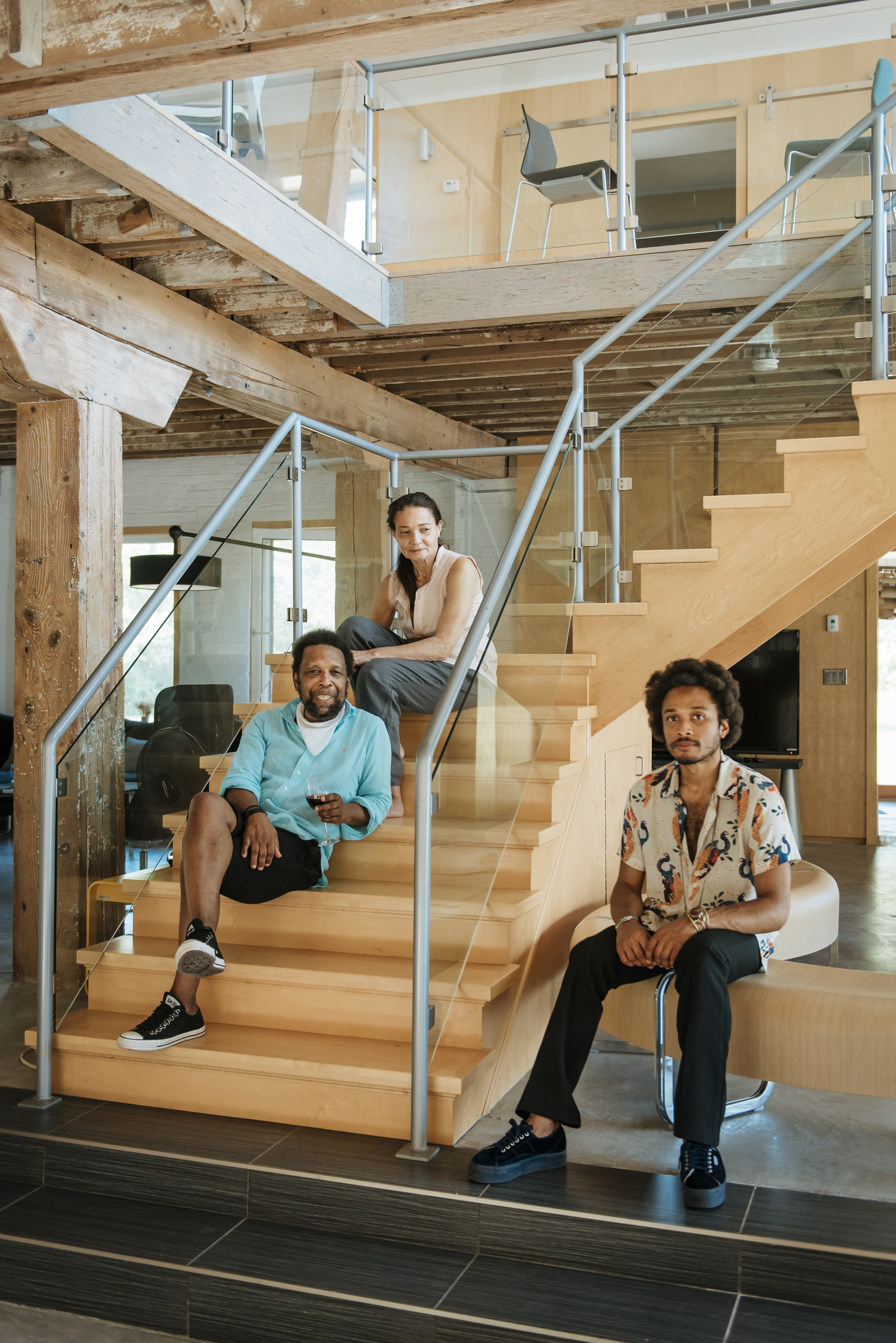 Here’s the view from the front. The main house is on the right. That structure on the left is the barn: 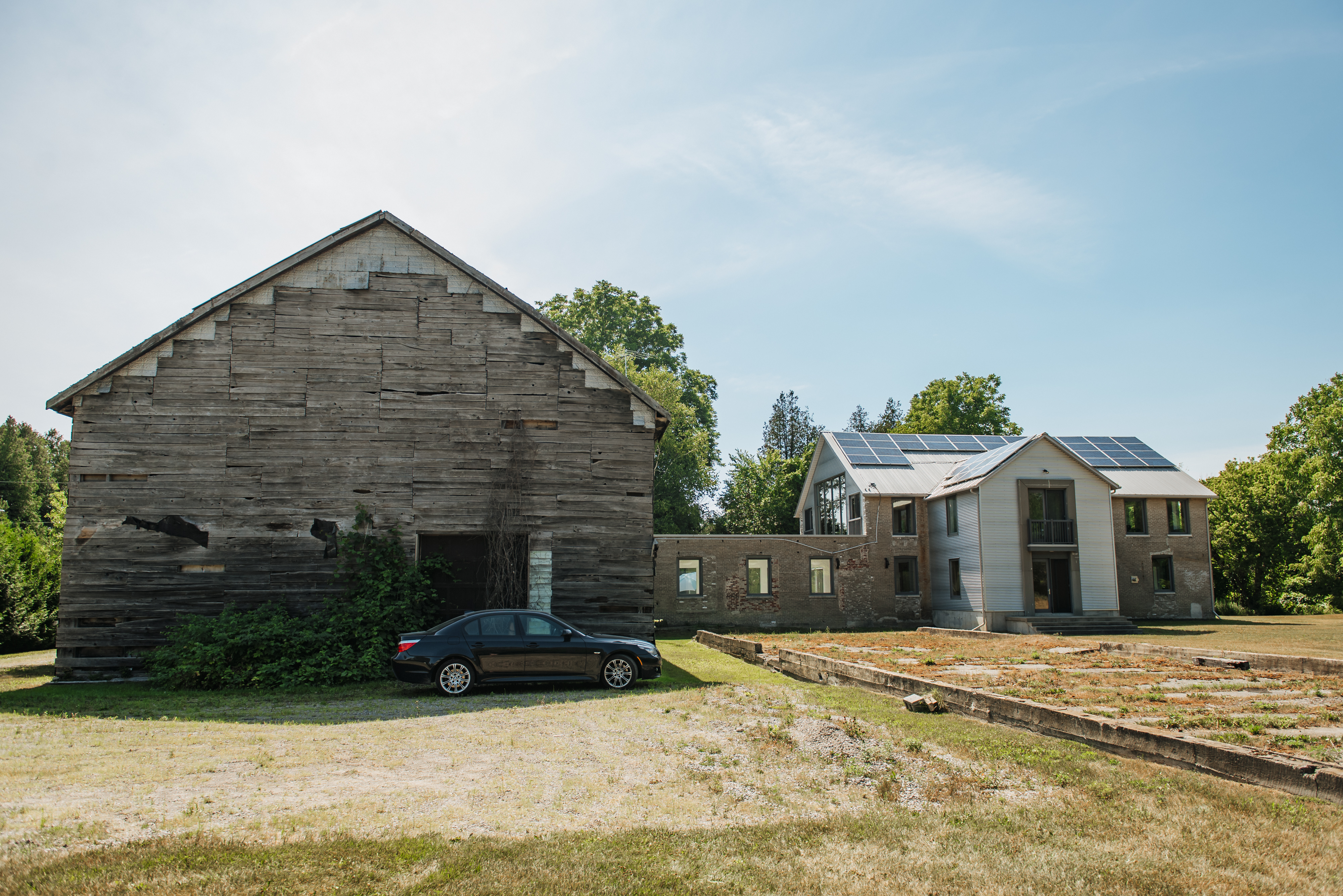 Floor-to-ceiling windows look out onto a courtyard, where the couple filled a reflective pool with lava rocks and added a corten steel firepit: 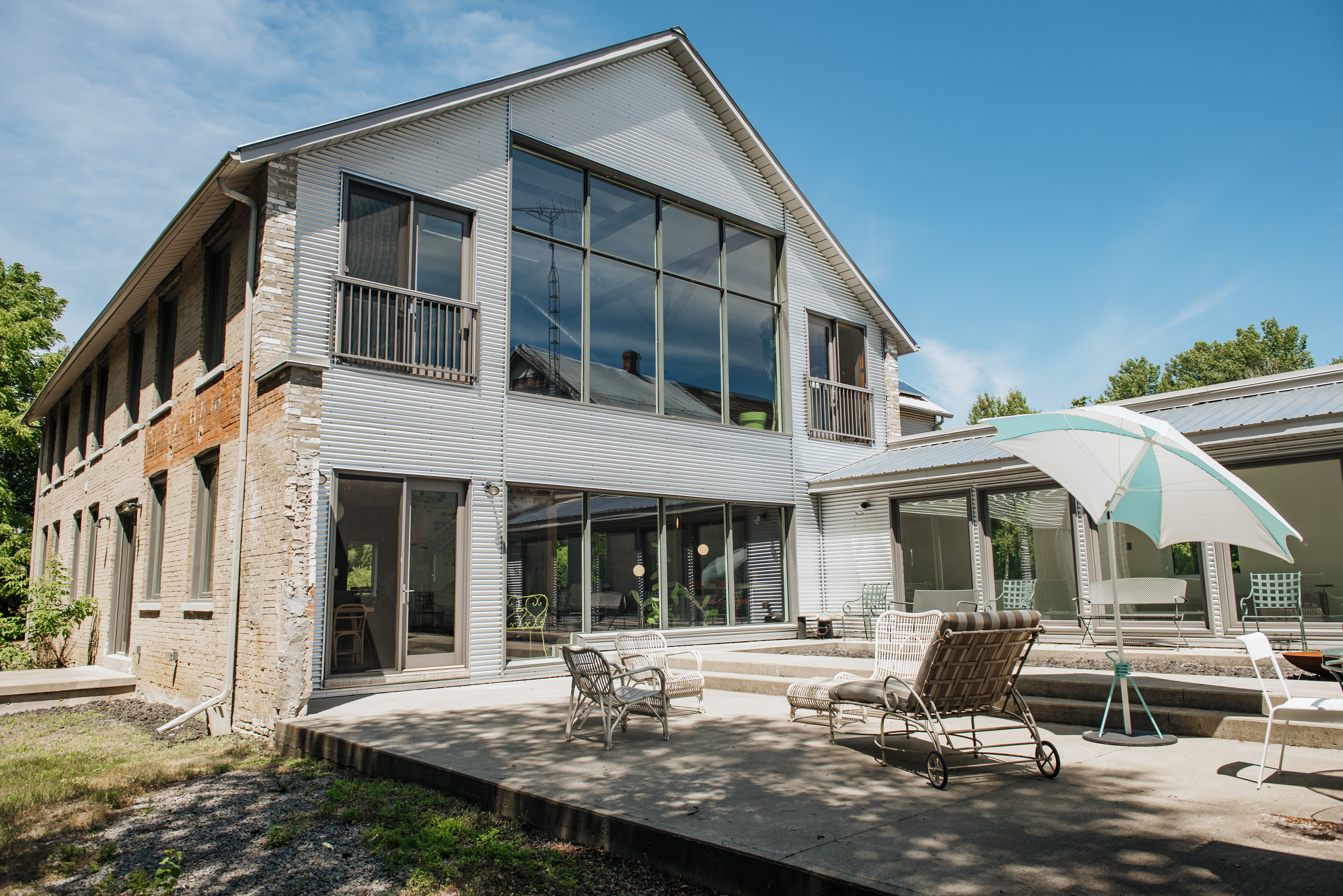 The meditation zone features a sunken cacti planter, circular pendant lights from Anony and a teak table that sits six inches off the ground: 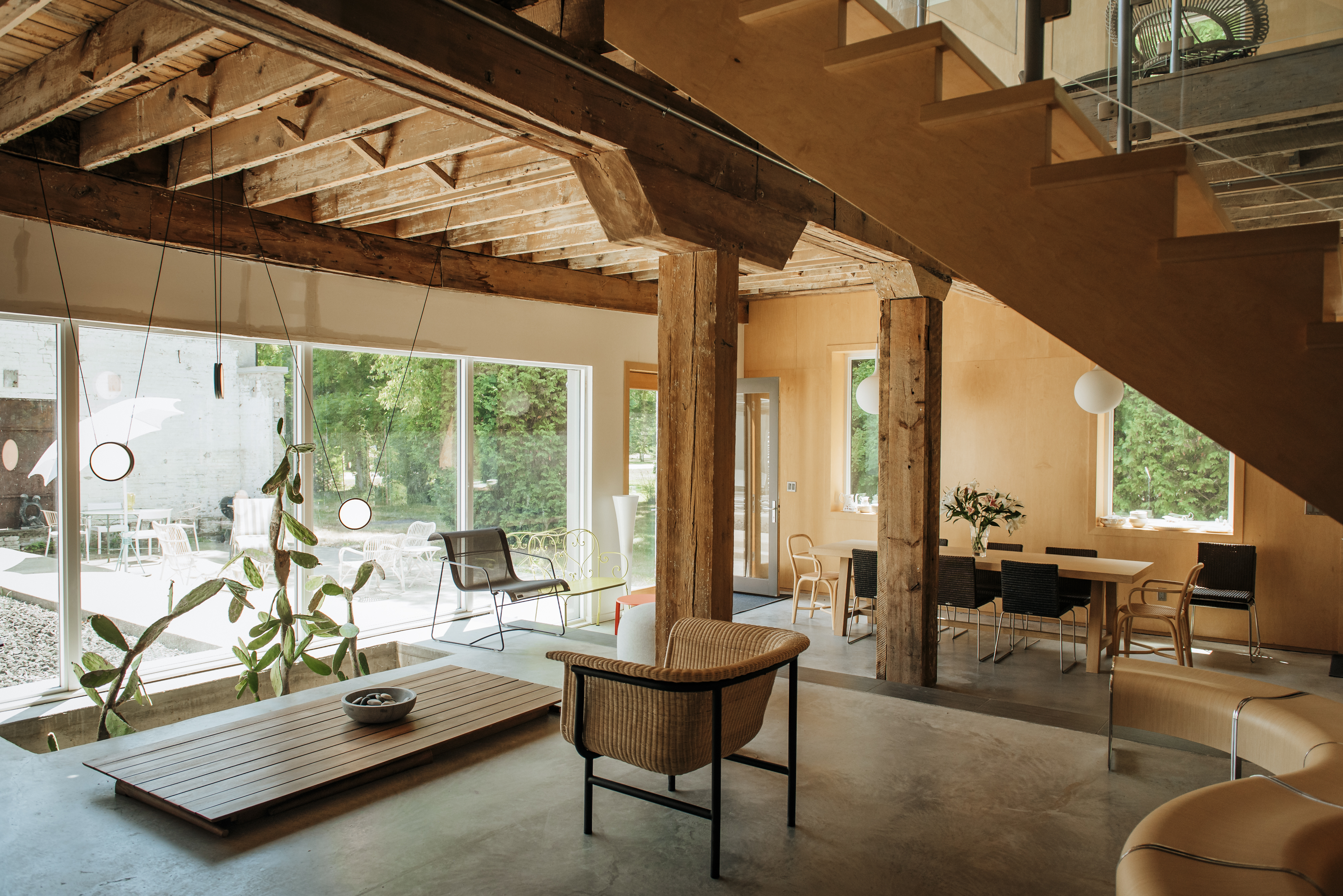 The music zone has a La Boite turntable (Cliff and Yasmin collect a classic records by the likes of James Brown, Aretha Franklin, Van Morrison, Bob Marley and Miles Davis). It’s surrounded by cocoon-shaped lounge chairs and pouffes. And that gas fireplace is surrounded by porcelain tile designed to look like reclaimed barnboard: 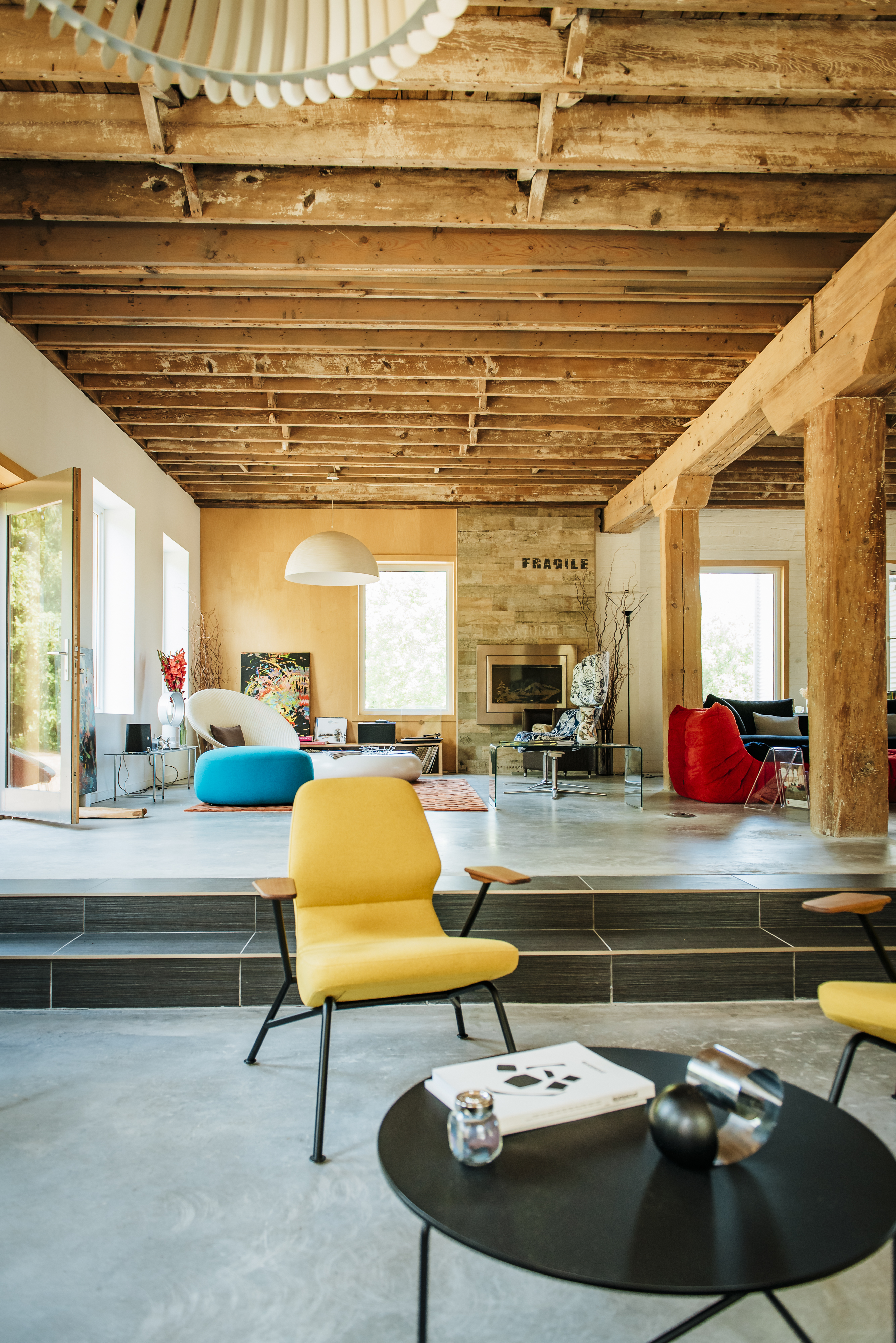 The place has multiple sitting areas. Cliff and Yasmin like to move around throughout the day, depending on where the light is best: 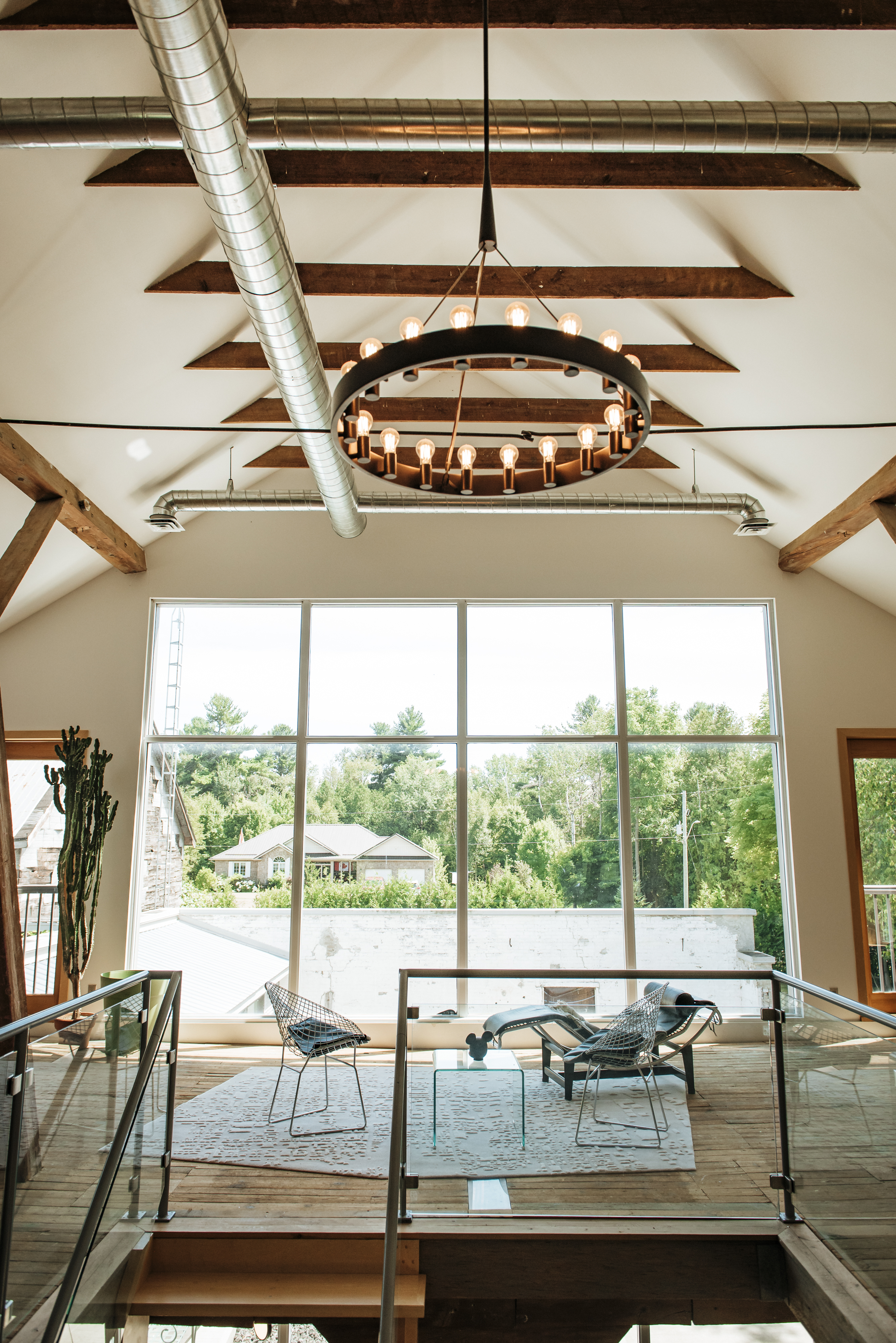 Most of the art is by Canadian illustrator and painter David Chestnutt. Cliff once hosted an exhibit of his work at Augustus Jones: 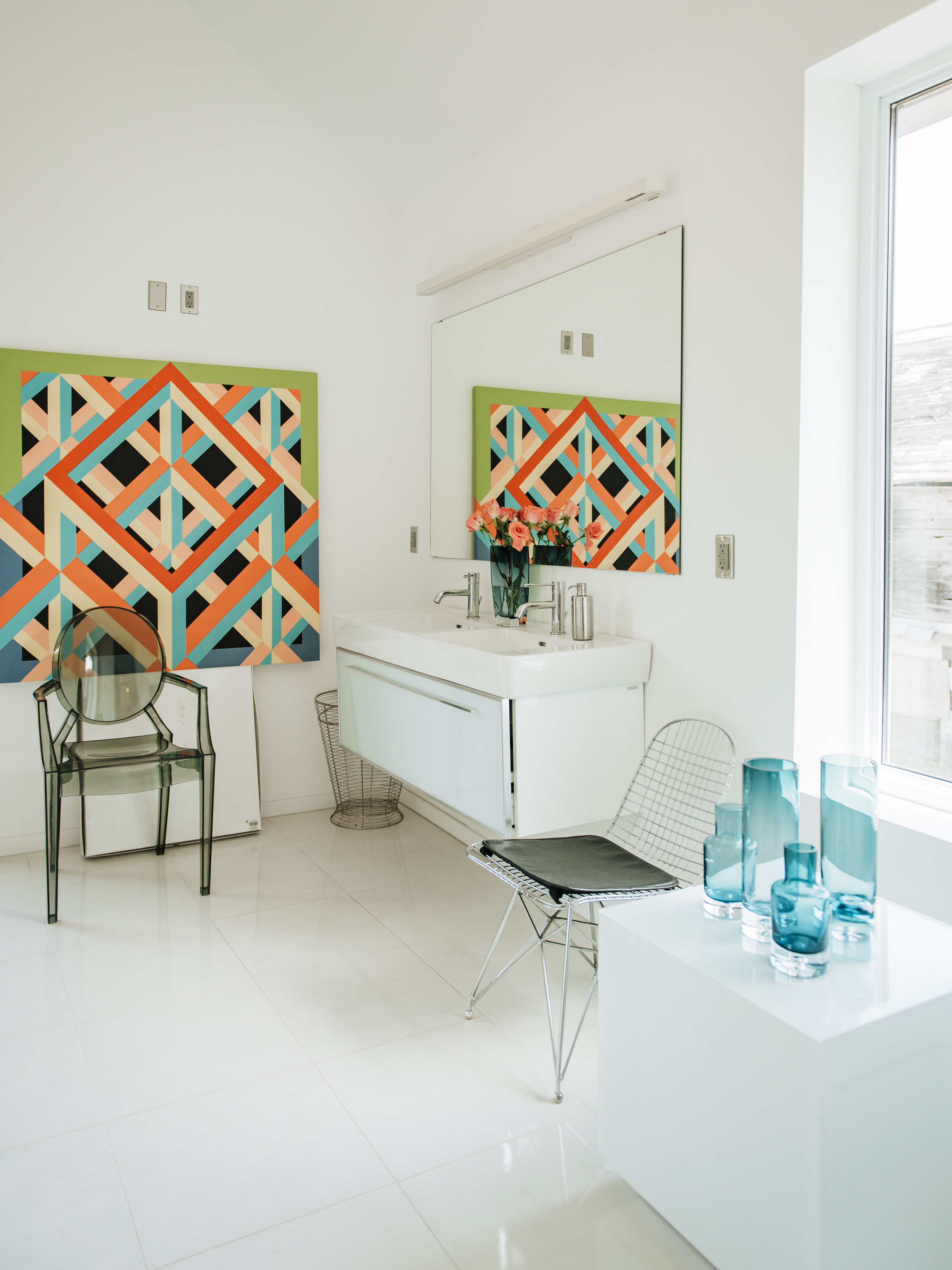 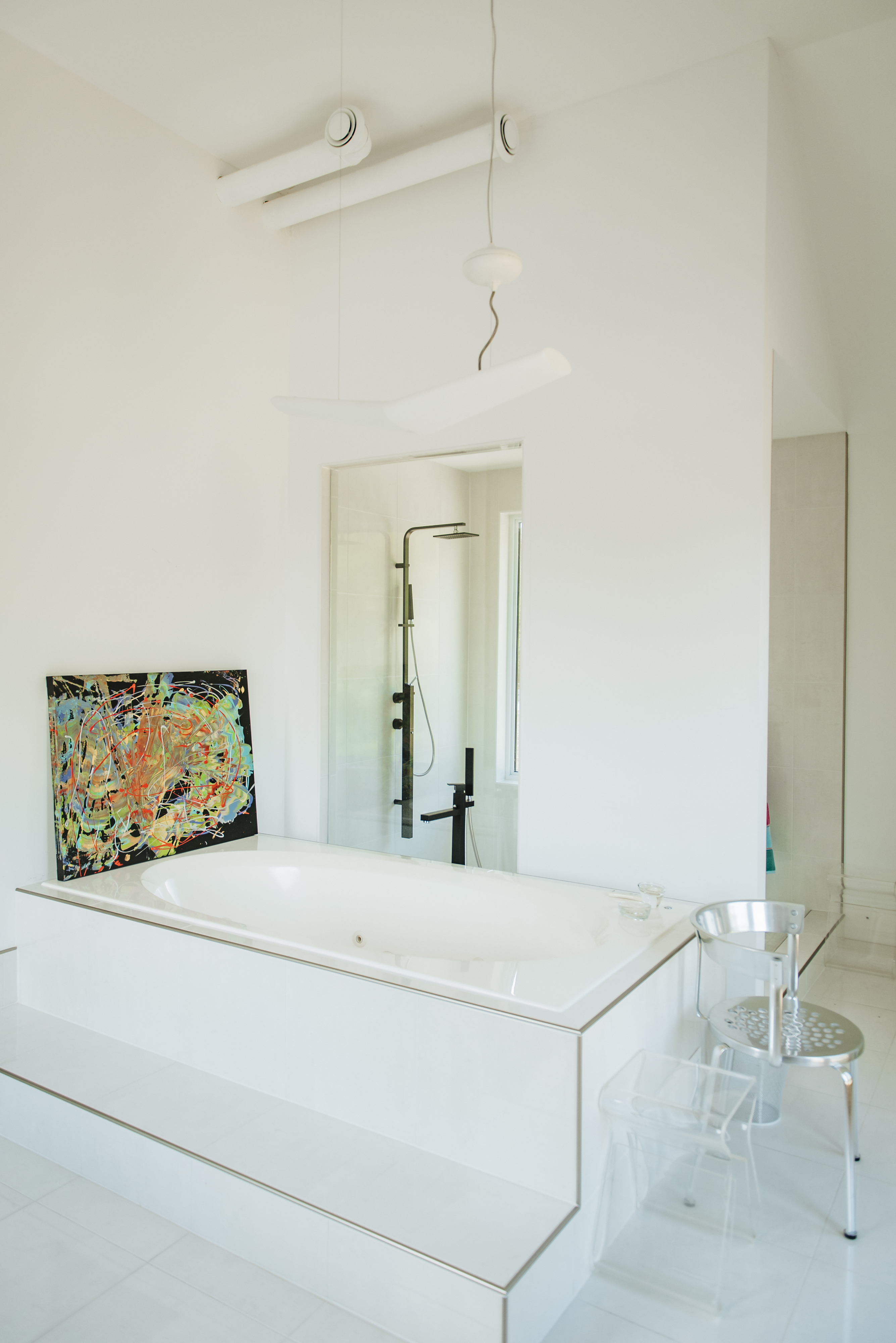 Cliff created a home office upstairs in 2015, after the couple sold their Toronto house and downsized to a condo: 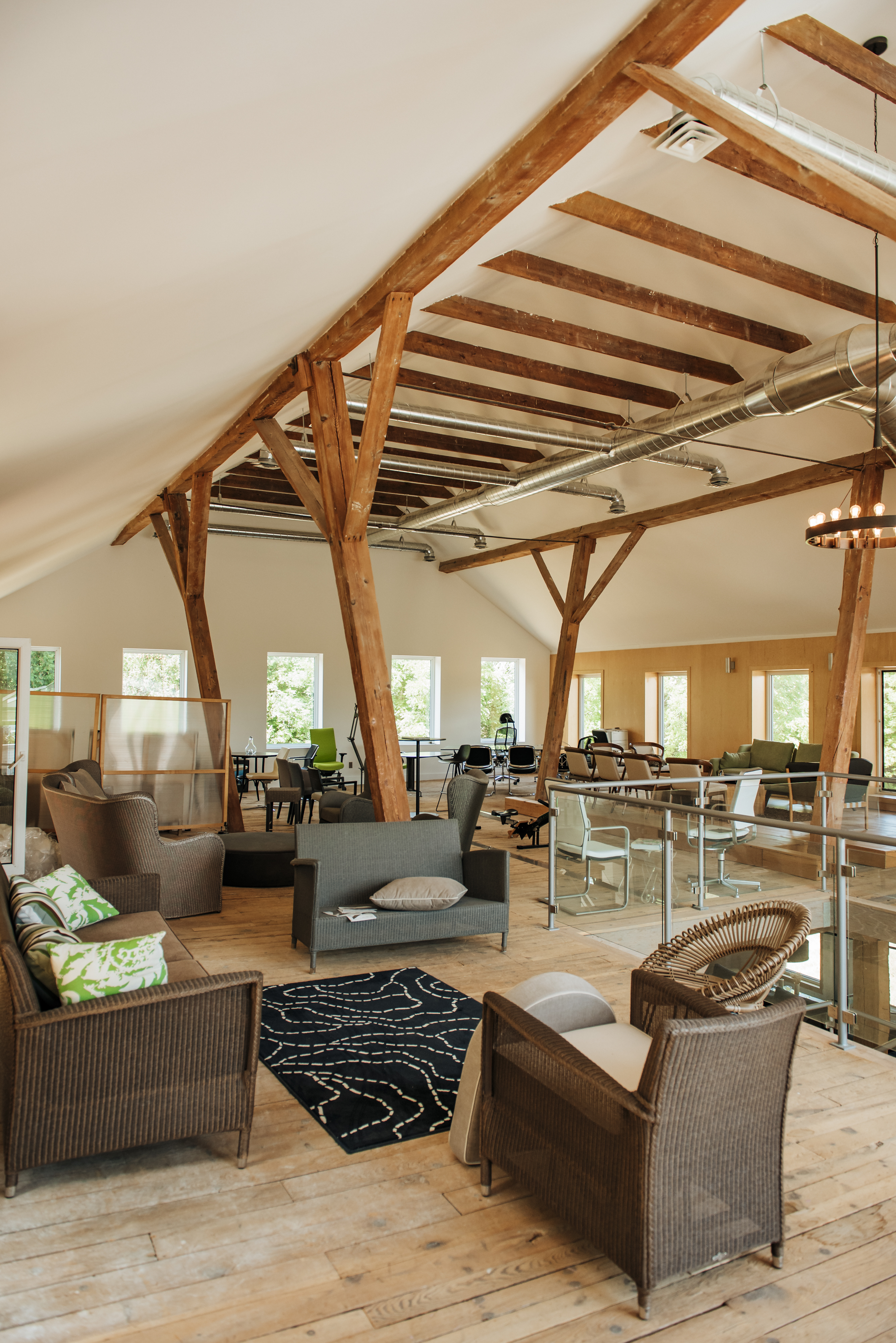 Yasmin loves to sit in the hallway in the winter with a book and a coffee: 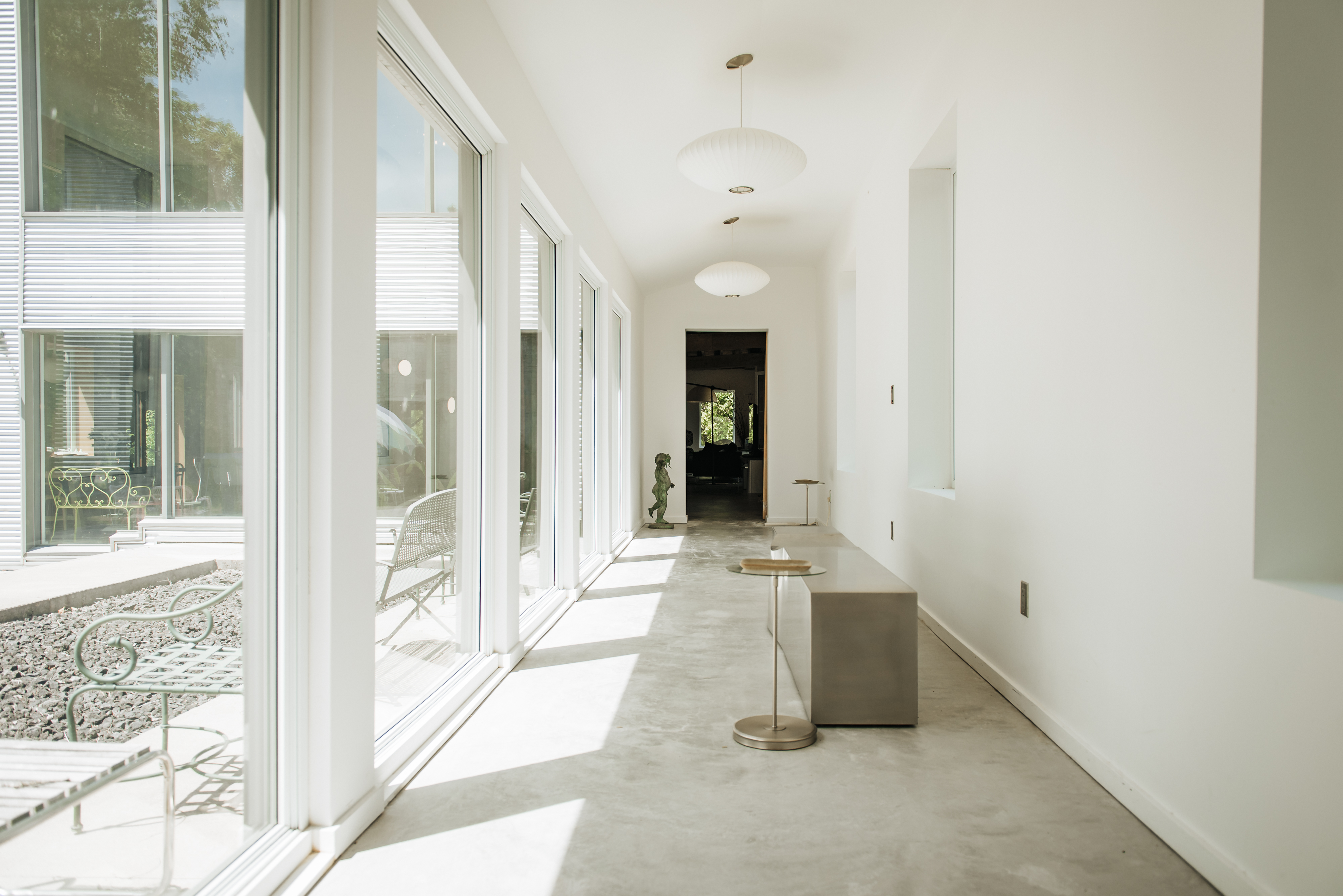 They installed sliding barn doors finished with steel supports to ensure no wasted space—and because they fit nicely with the factory feel: 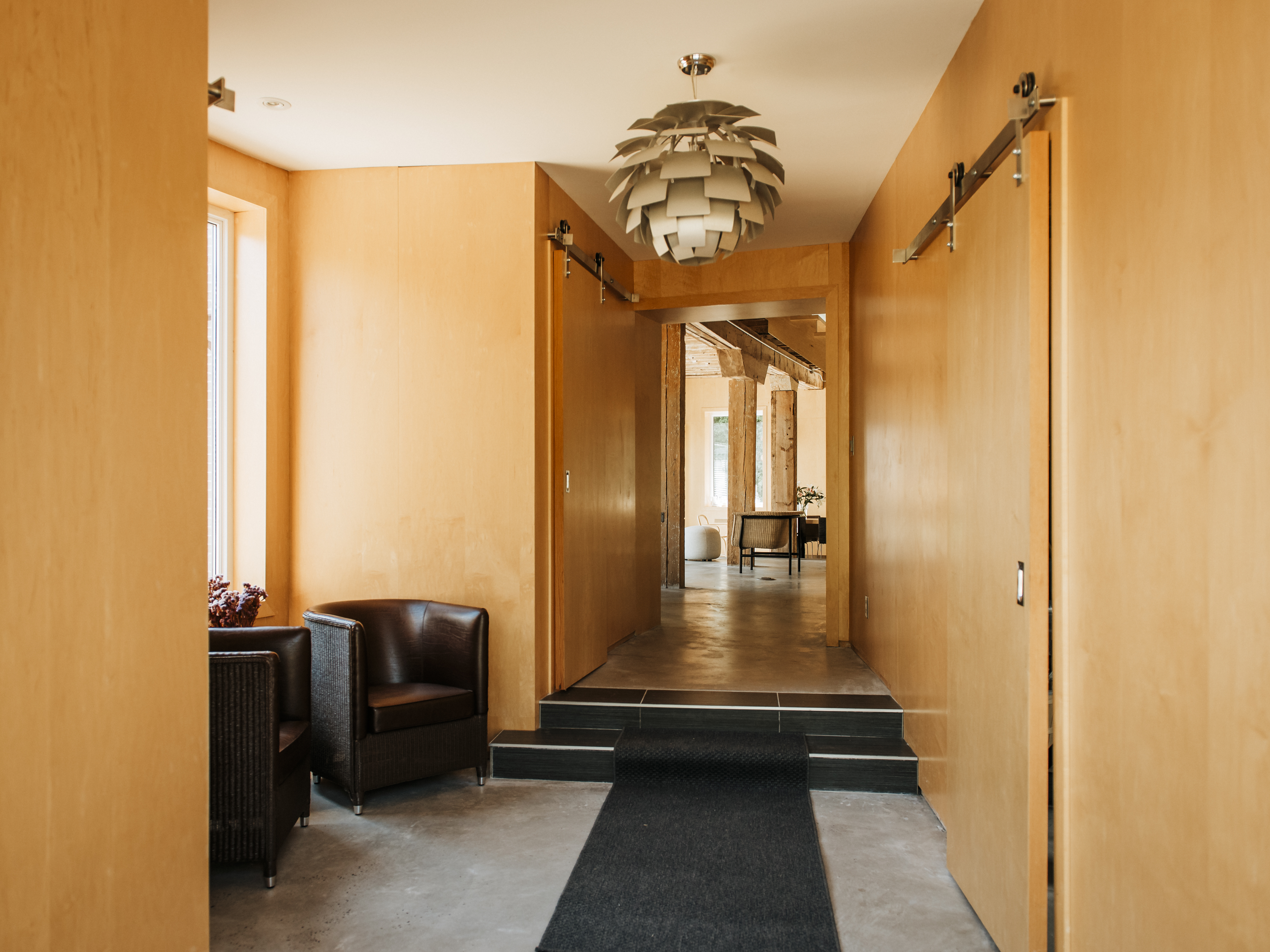 The dining room table is made of oak and can seat 10 people: 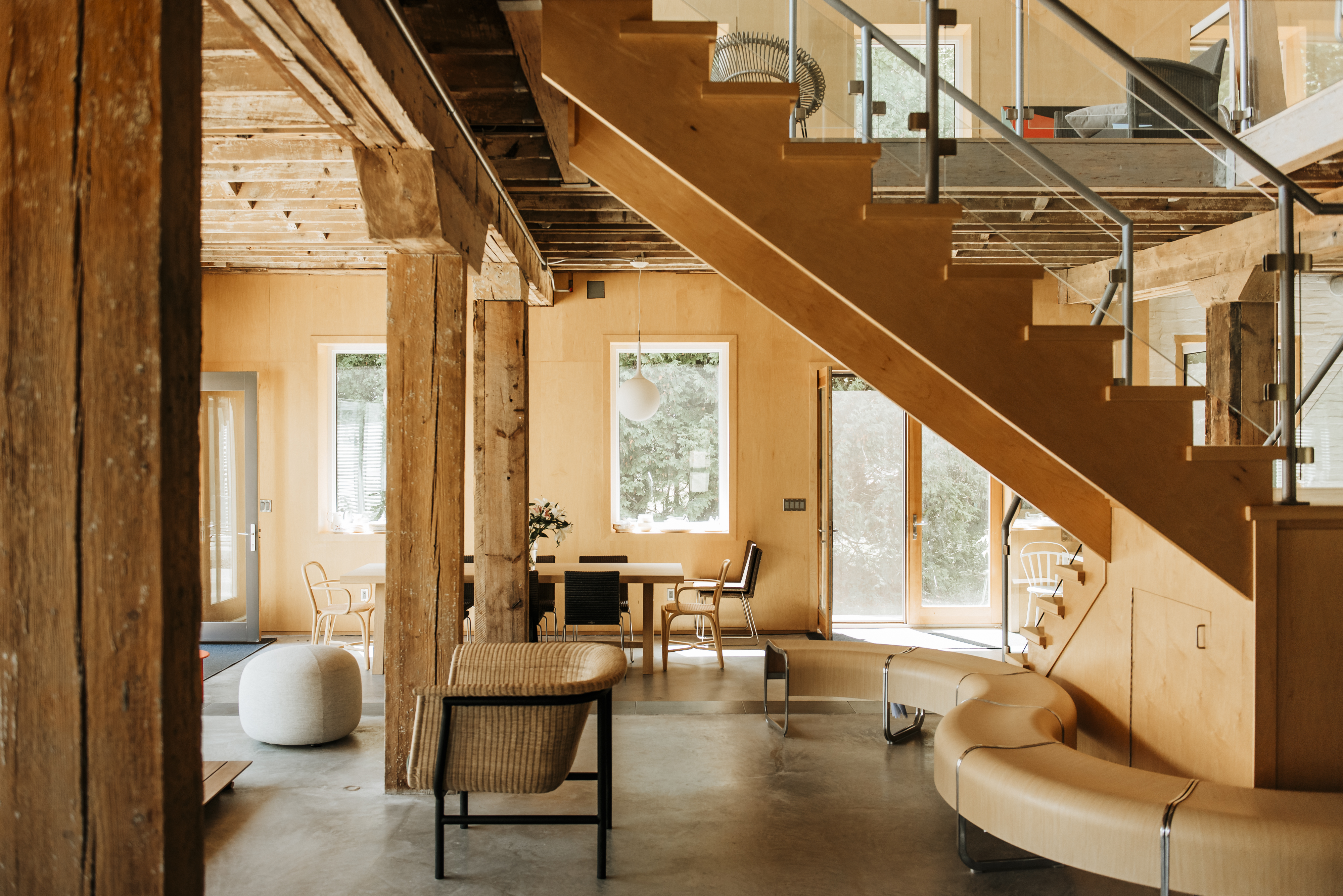 The kitchen is built so you can stand or sit at the counter comfortably. Stainless steel coverings hide all appliances. The tops slide back to reveal the sink and cooktop when needed: 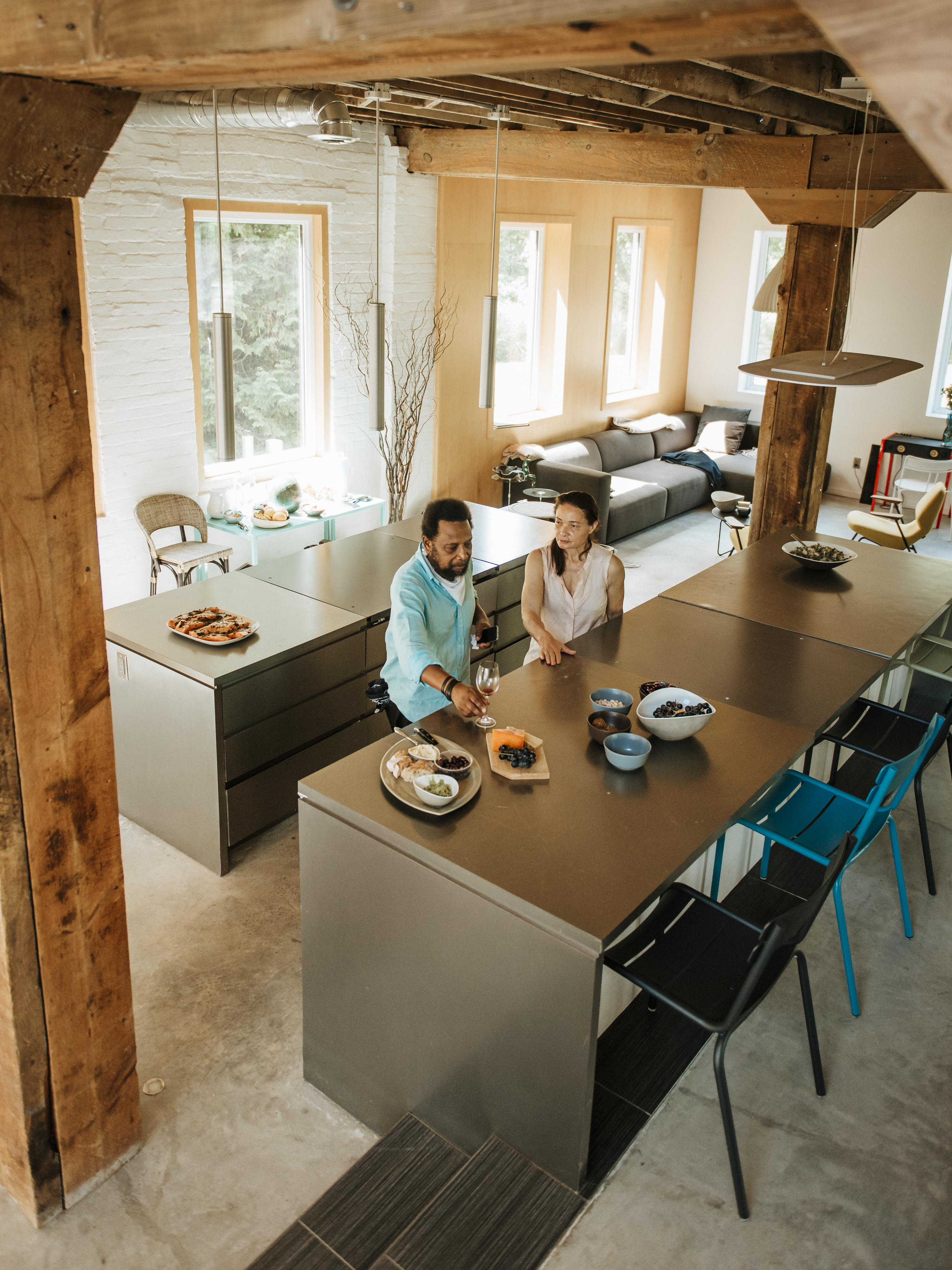