Katherine Taylor has been writing about Toronto history on her blog, One Gal’s Toronto, for six years. In her new book, Toronto: City of Commerce, she tells the stories of the significant buildings and ghost signs we pass everyday—often obliviously. The photography is a mix of archival images and Taylor’s present-day photos. Here’s some of our favourites. 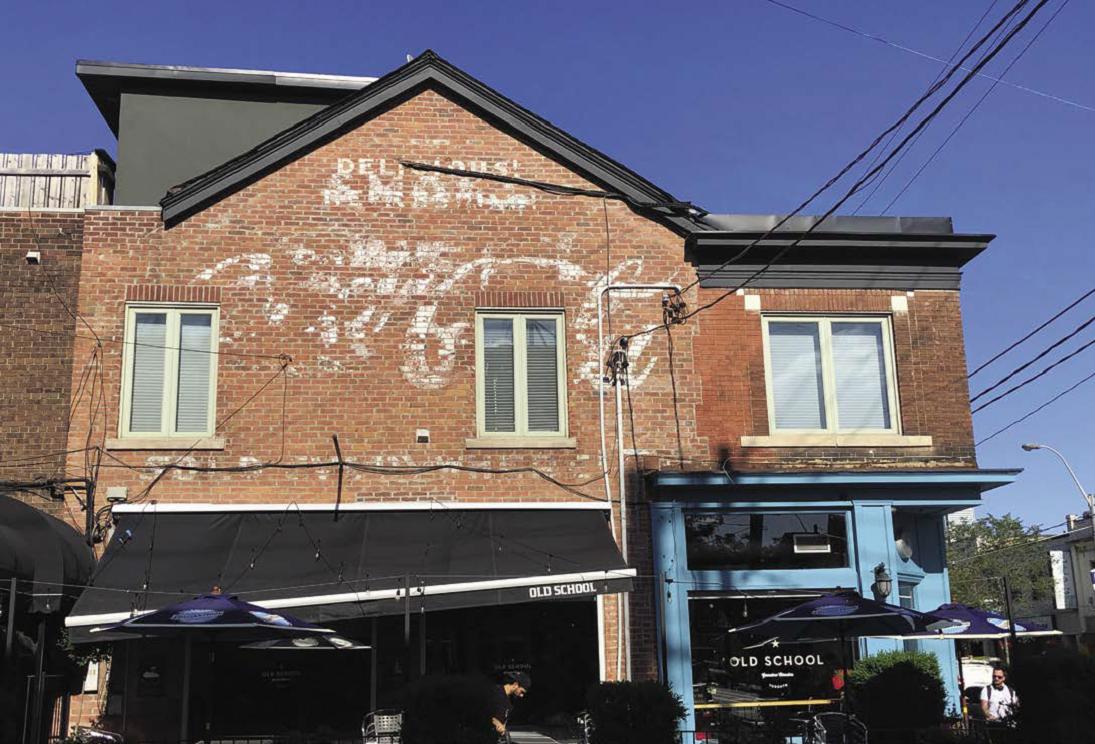 Before Old School was serving hangover-curing brunches at Dundas and Palmerston, the corner building was home to a small business opened by Aaron Edelist and his family in the mid-1930s. The Edelists also owned another deli on College as well as the Palestine Kosher Sausage Manufacturing Co. that filled a need for kosher products in the city. A faded Coca-Cola ad is still visible on the side of the building. 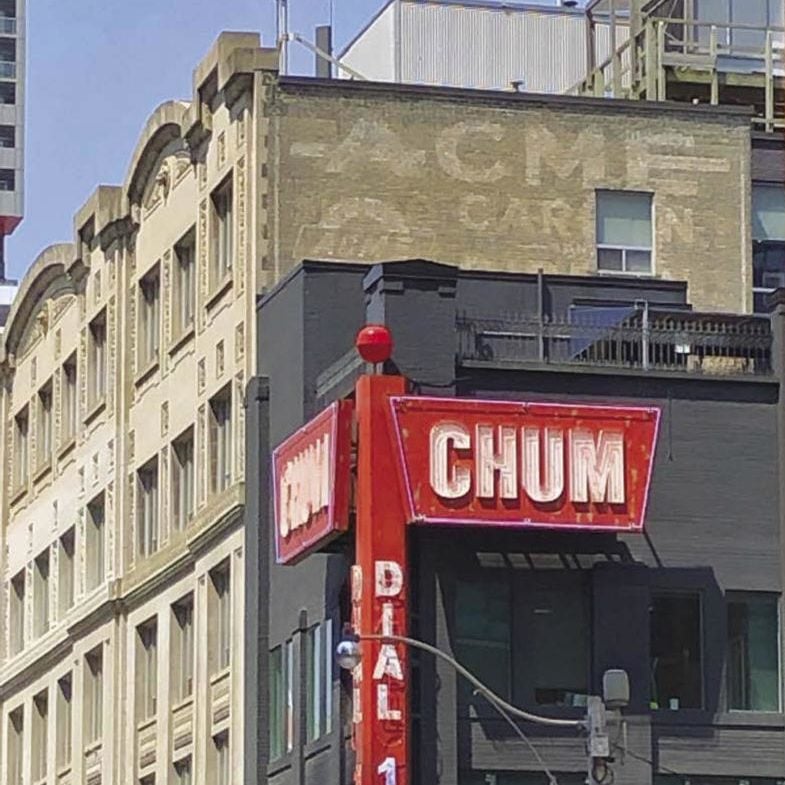 Tucked behind the iconic CHUM radio sign is the faded signage of ACME Carbon and Ribbon, a printing and publishing business started by James Alexander Campbell, a World War I veteran who received the Croix de Guerre for bravery. ACME was an early supplier of products used in typewriters and printing. The building at Richmond and Duncan is now owned by Bell Media. 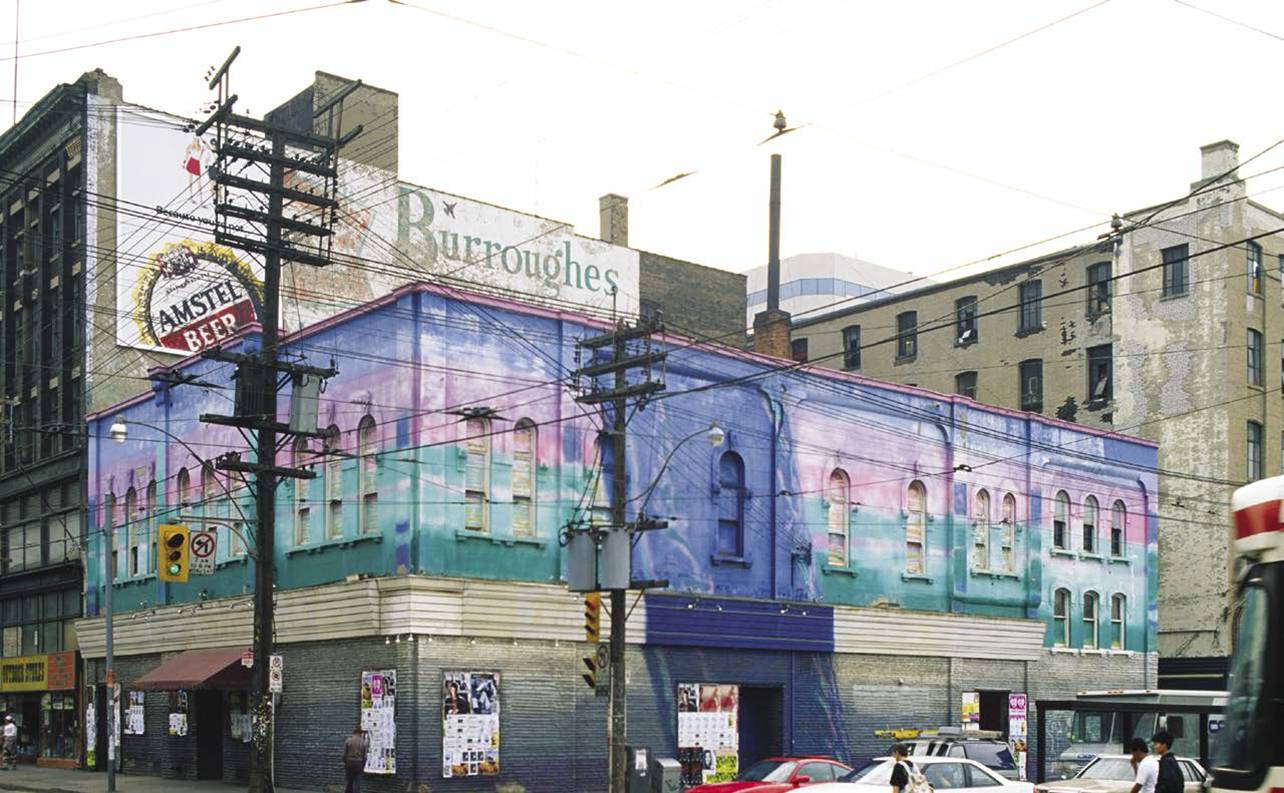 The F. C. Burroughes Furniture Company built its six-floor Queen West flagship retail store in 1907. It was the tallest building on the stretch of the neighbourhood at the time and was one the most popular furniture stores in town. Burroughes moved out in 1962, and the multi-level building has been housing retailers ever since (most recently home to Design Republic). In 2006, Queen Street Partners took over and now rents its space to retailers, offices and hosts events. 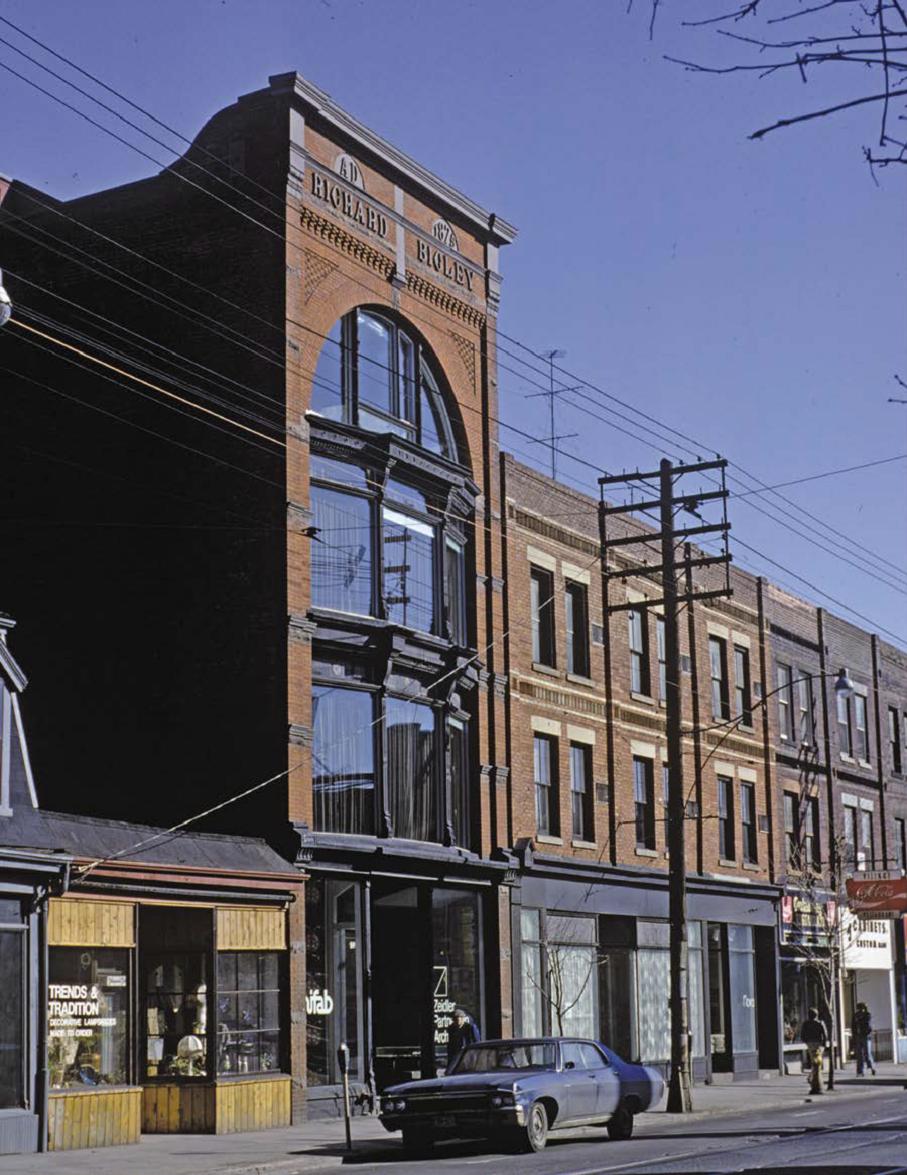 Richard Bigley was a pattern maker who made molds for factory machinery. He started selling his own line of products in 1875 and opened his showroom and warehouse at 96–98 Queen St. E. in 1890 (His name is still visible atop the building). “Three years later, an 11-year-old boy employed by Bigley was killed by a freight elevator in the warehouse,” Taylor says. “Child labour laws were just coming into effect then, but they weren’t really strong enough.” The building was converted into lofts in the late 1990s. 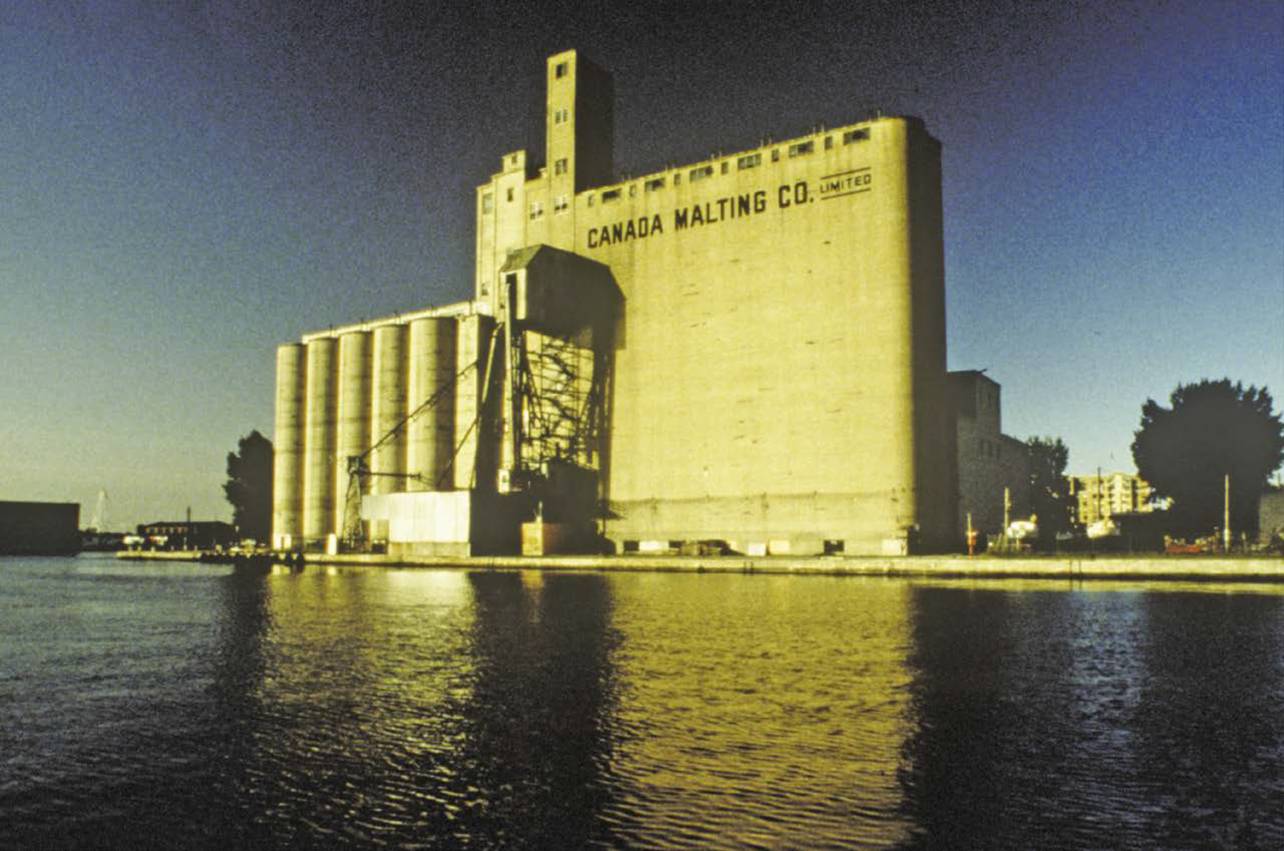 Queens Quay and Bathurst, circa 1928

The silos, on the waterfront at the end of Bathurst, were built in 1928 for the Canada Malting Co. after its Montreal location reached production capacity. By the late 1930s, the company needed a larger Toronto facility and built an extension. Saved from a demolition attempt in the 1980s, the silos are now a designated heritage site. The derelict silos are undergoing repair, and the surrounding area will be transformed into a cultural hub. 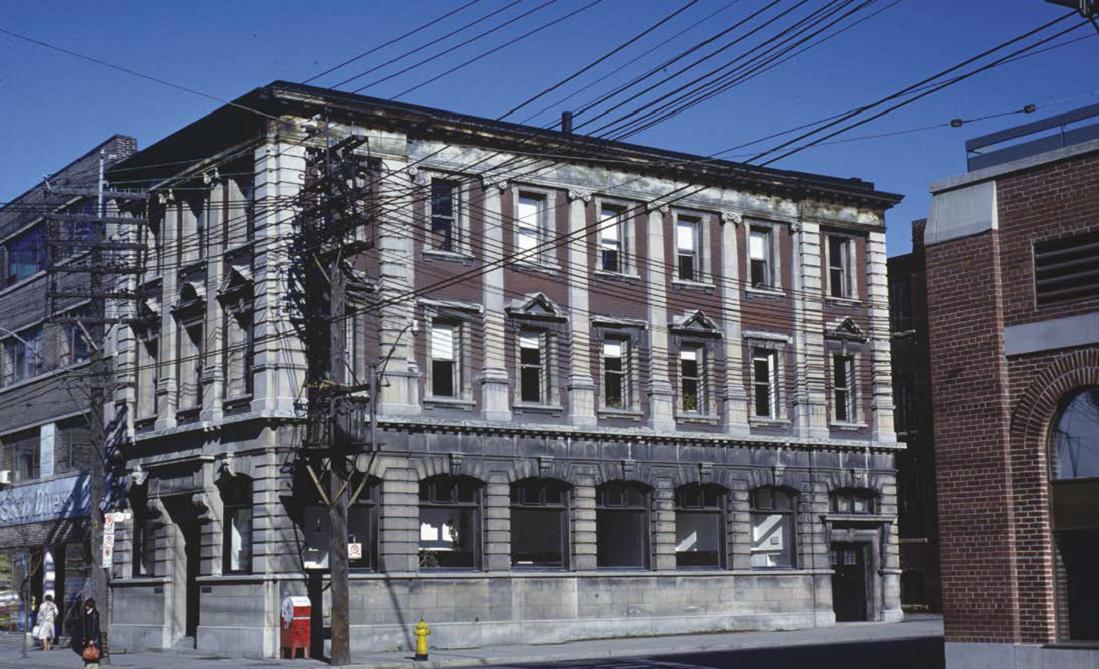 Toronto’s Sovereign Bank was short-lived. “Duncan Stewart, who was the manager, really ran amok; he just started opening branches all over. He opened branches in places that hadn’t even been developed as a township yet,” Taylor says. About six years after the business started in 1902, it went under. One of the last Sovereign locations sits at the corner of King and George.

The Gelber brothers—Louis, Moses and Leo—immigrated from Austria to Canada in the 1890s and soon became businessmen and philanthropists. Leo co-founded the Standard Cap Company, which specialized in children’s uniforms and caps. His factory burned down in the Great Fire of 1904, and during its reconstruction, a brick fell on Leo’s head and killed him. His brothers took over the business and started Imperial Clothing Company, and later Gelber Bros Limited, which specialized in wool garments. The Gelber building at Richmond and Duncan was built in 1920. 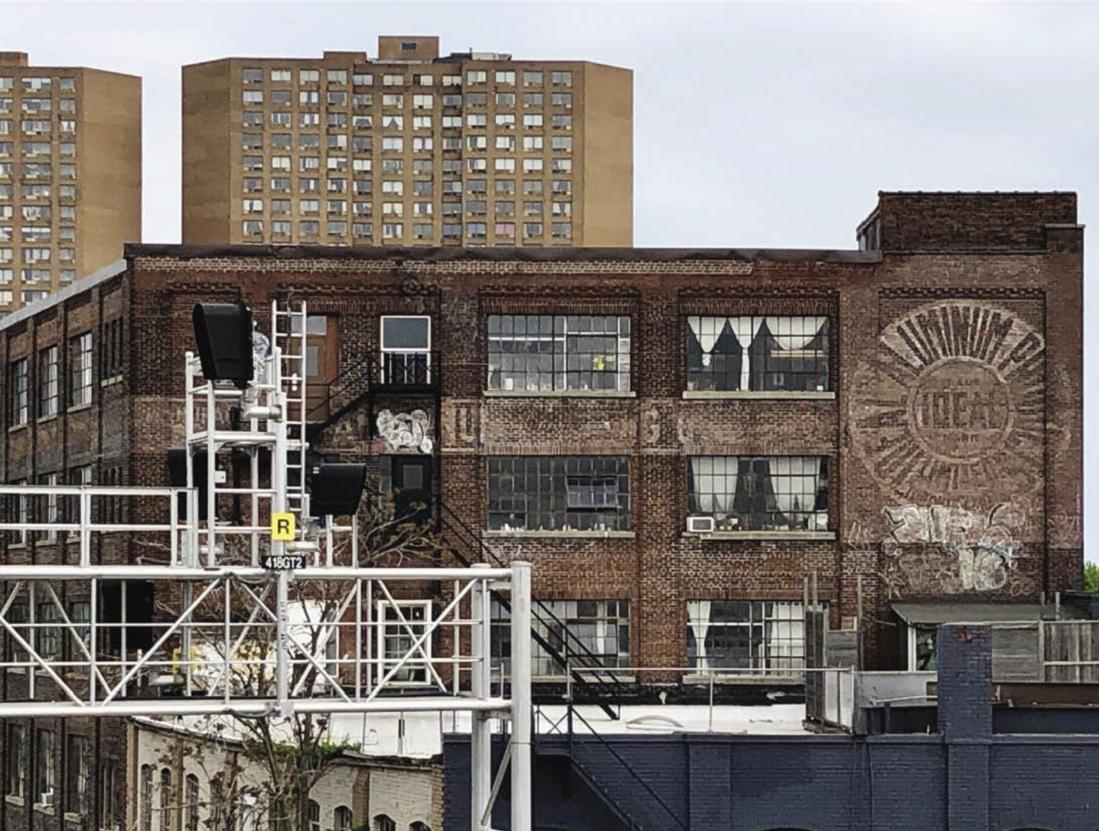 The Dundas West Arts building is the former head office and factory of Ideal Aluminum. The company was born from the merger of two aluminum businesses, and by 1922, had branches across Canada. A decade later, the company closed and disappeared from the Toronto industrial market. The building is now rented loft workspaces and the site still bears the faded logo of its former owner. 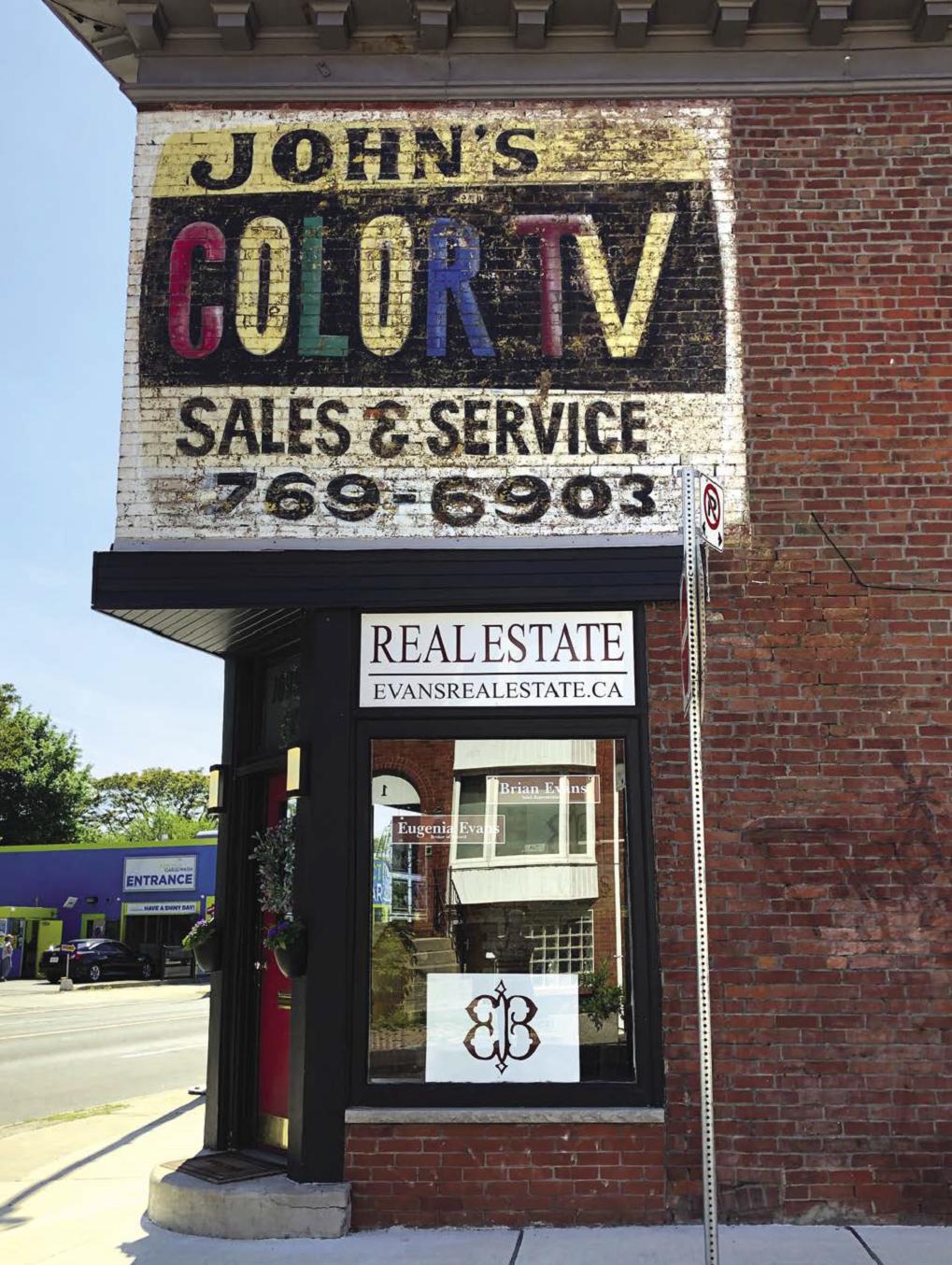 John’s Color TV on Dundas Street West started in the 1950s as a TV and radio repair shop, and was updated with the advent of colour television in the following decade. The building now holds a real estate office, but the original sign remains on the facade.

Reliance Engravers, a photo-engraving business on Bond Street, was the site of an early Toronto workplace shooting. In 1931, an employee brought in a gun to work and killed another worker. The 29-year-old employee turned himself in to the police right after the incident. The building is now owned by Ryerson University. 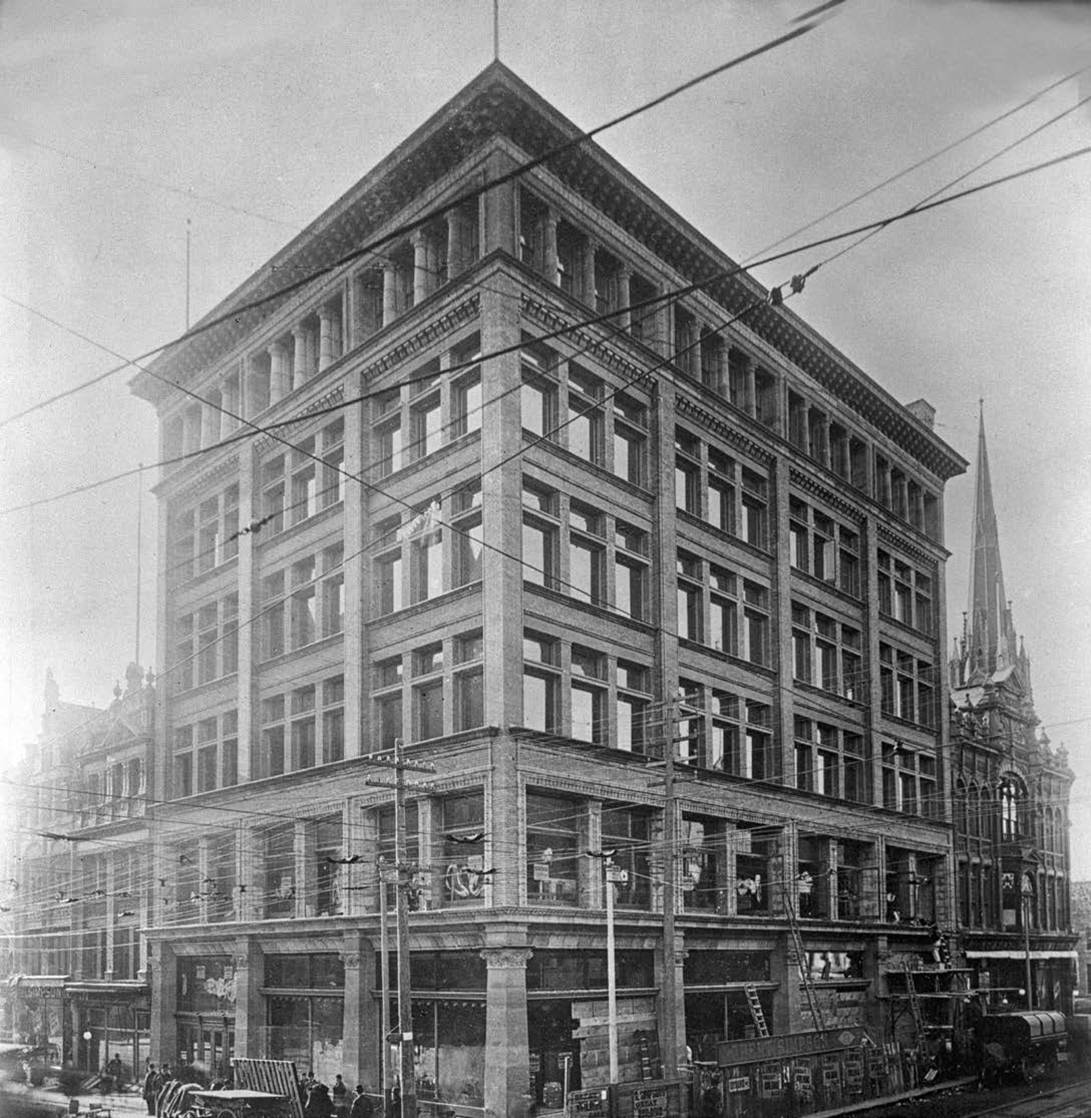 Simpsons was a prominent department store in Canada, selling everything from clothing to furniture to jewellery and china. Its six-storey building at Yonge and Queen was a shopping hotspot for Toronto’s growing population. Hudson’s Bay acquired Simpsons in the late 1970s. 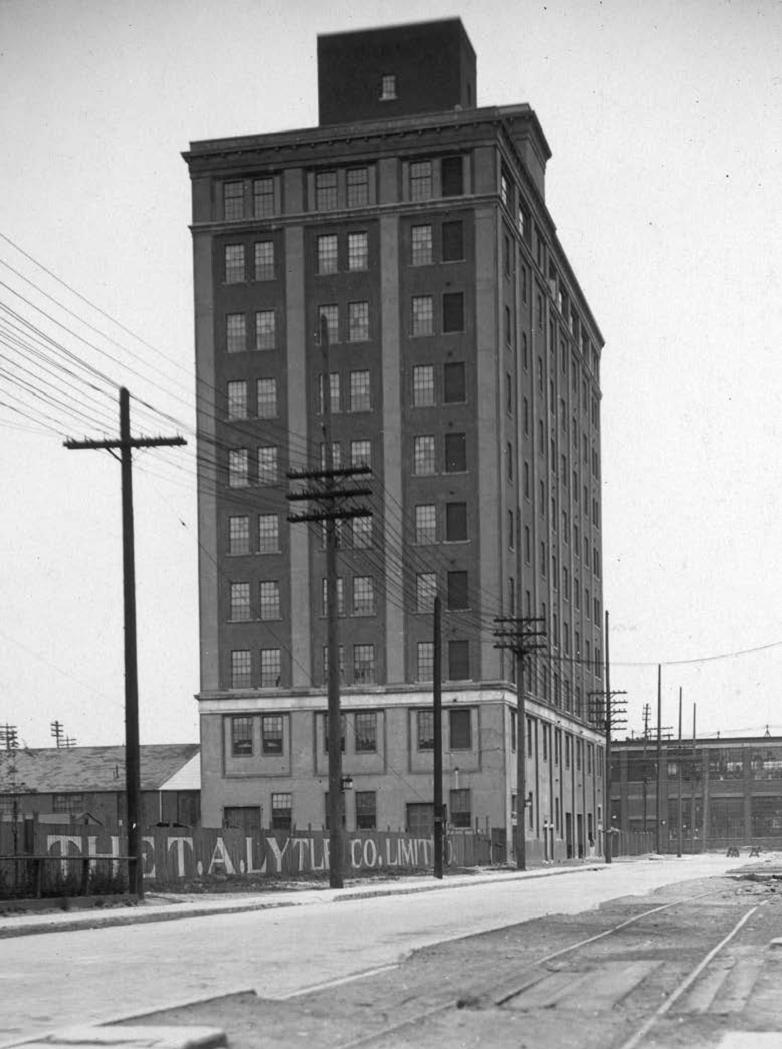 Then: T. A. Lytle
Now: Offices for Henderson Brewing Co. and House of Anansi Press

The former T.A. Lytle and Co. vinegar factory on Sterling Road (located next to MOCA’s Auto Building) produced items like pickles, jellies and salad dressings. The property was the site of the recently closed Drake Commissary, and continues to house Henderson Brewing Co. and House of Anansi Press. 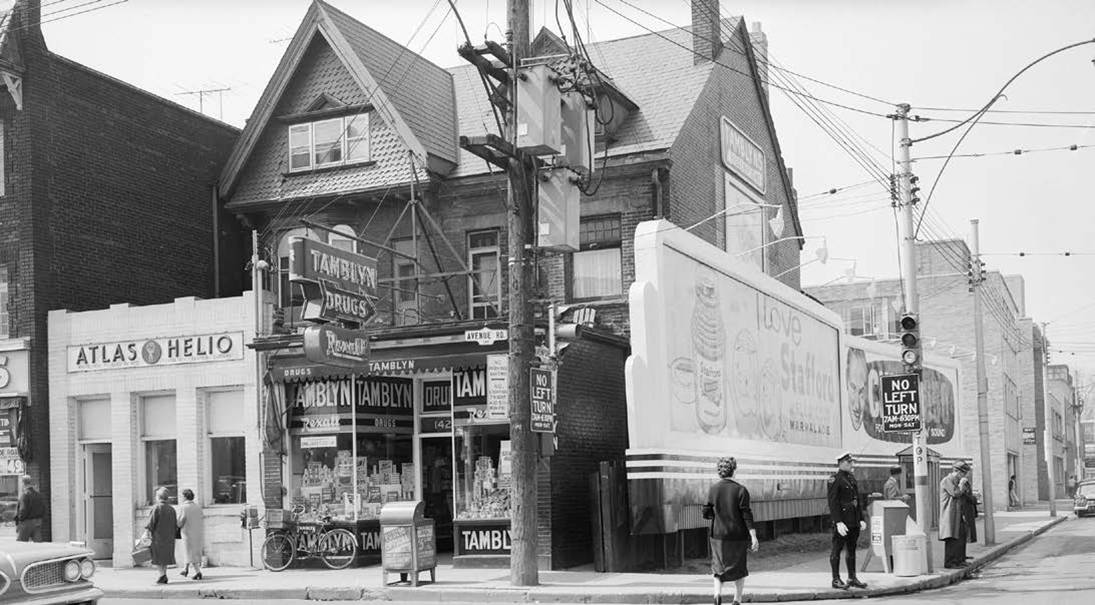 Gordon Tamblyn was one of the city’s most prominent pharmacists. In 1904, he opened his first drug store in the Beaches and soon expanded his stores across the city—including this location at Avenue and Davenport. The original sign is not visible, but there is still a Tamblyn’s tiled entrance in the Beaches. 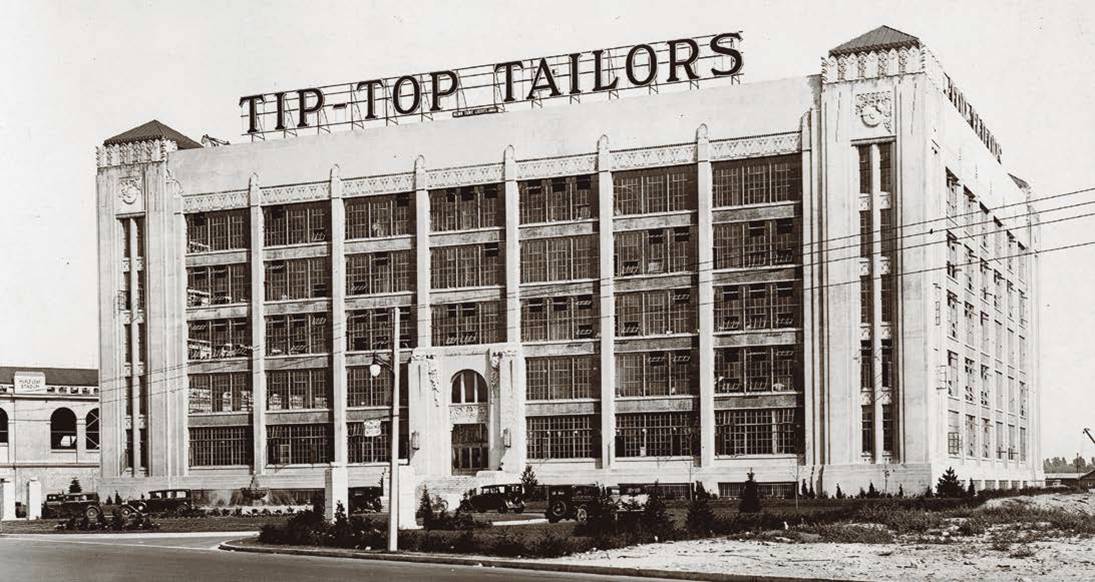 Now a mall retail chain, Tip Top Tailors had humble beginnings. The menswear business was founded by David Dunkelman, who immigrated from Poland in the early 1900s. Dunkelman started off renting out a storefront on Adelaide, eventually moving into the Art Deco headquarters near Fleet and Lake Shore. The industrial building was converted into condos in the early 2000s. 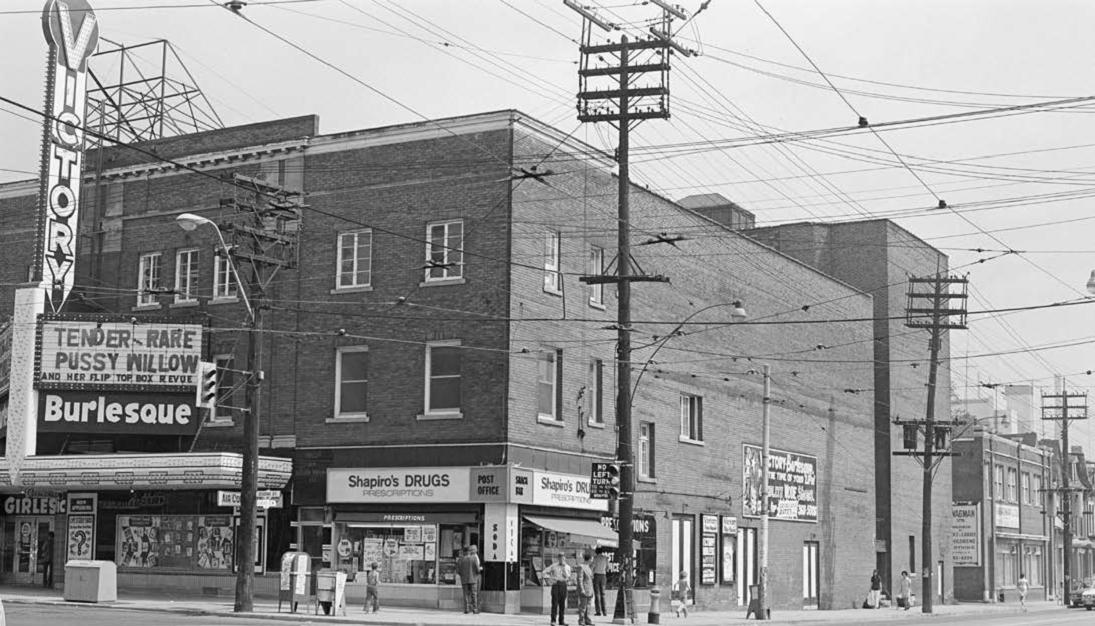 This site, at the corner of Spadina and Dundas, has housed many artistic enterprises since it opened in 1922 as the Standard Theatre—Ontario’s first Yiddish theatre. The building became a cinema in the 1930s. In the early 1960s, interest in live theatre returned and the space started putting on burlesque shows.