Beer, of course. Morris, who graduated from the Niagara College Teaching Brewery, hopes to roll out 60 different brews over the next year. For now, there are eight available: a hefeweizen, a session ale, a lager, an APA, an IPA, a smoked porter and a Belgian pale ale. A bottle shop is in the works, but for now Bandit’s beer has to be consumed on the premises.

Though there are just eight beers on tap now, the goal is to have 15 taps at a time, plus another five dedicated to guest brews.

Flights of four are available (in adorably branded glassware).

Salty, cheesy, meaty, greasy grub—and a kale salad. Hennick’s short menu is full of snacks (pretzels, fries, charcuterie) meant to complement the beer. “I don’t want them to be known for their chimichurri steak,” he says. “They’re making some of the best craft beer in the city, and I don’t want the focus to be taken away from that.” Instead, Hennick will try to incorporate Bandit’s brews into the food (like his beer-battered cheese curds) whenever he can.

Fries topped with parm and served with house-made aioli. $6.

Dubois and Hamza searched high and low for the right location before finding a former auto body shop, a space that had more than enough room to fit their tanks and a parking lot that could be turned into a patio. Communal tables, hanging plants, strings of lights and roll-up garage doors bring the outdoor beer garden inside. The patio isn’t open yet (the application is pending) but should be in time for warmer weather. 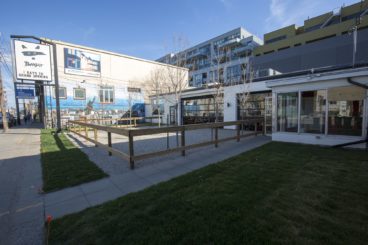 This used to be a parking lot.