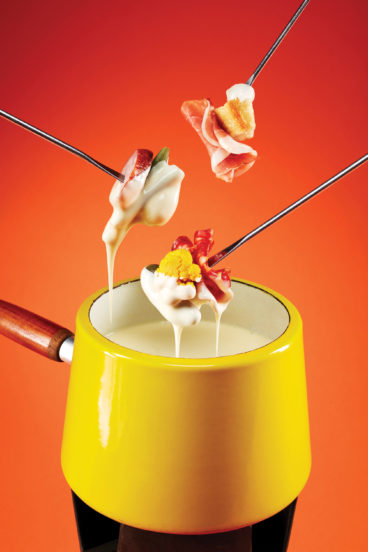 In the Alps, they know the secret to beating the winter blues: cheese. Specifically, the comforting goodness that is fondue. In Toronto, you can eat this dopamine-­boosting dish year-round at Wvrst, the German-­inspired sausage house and beer hall. What’s bubbling away in their vintage enamel pots may be the main draw, but the accoutrements are up there too: wild game sausage, freshly baked pretzels and Italian salumi are just a few of the dunkables on offer. “Because of our communal setup, Wvrst always has a celebratory energy—even on a Wednesday, it feels like a party here,” says chef-owner Aldo Lanzillotta. “Adding fondue to our menu just seemed like a natural progression: it’s a sharing dish that’s so much fun to eat.” Serves two to four. $44 (with potatoes, cornichons, pickled onions, pretzel and baguette), extra for other add-ons. wvrst.com 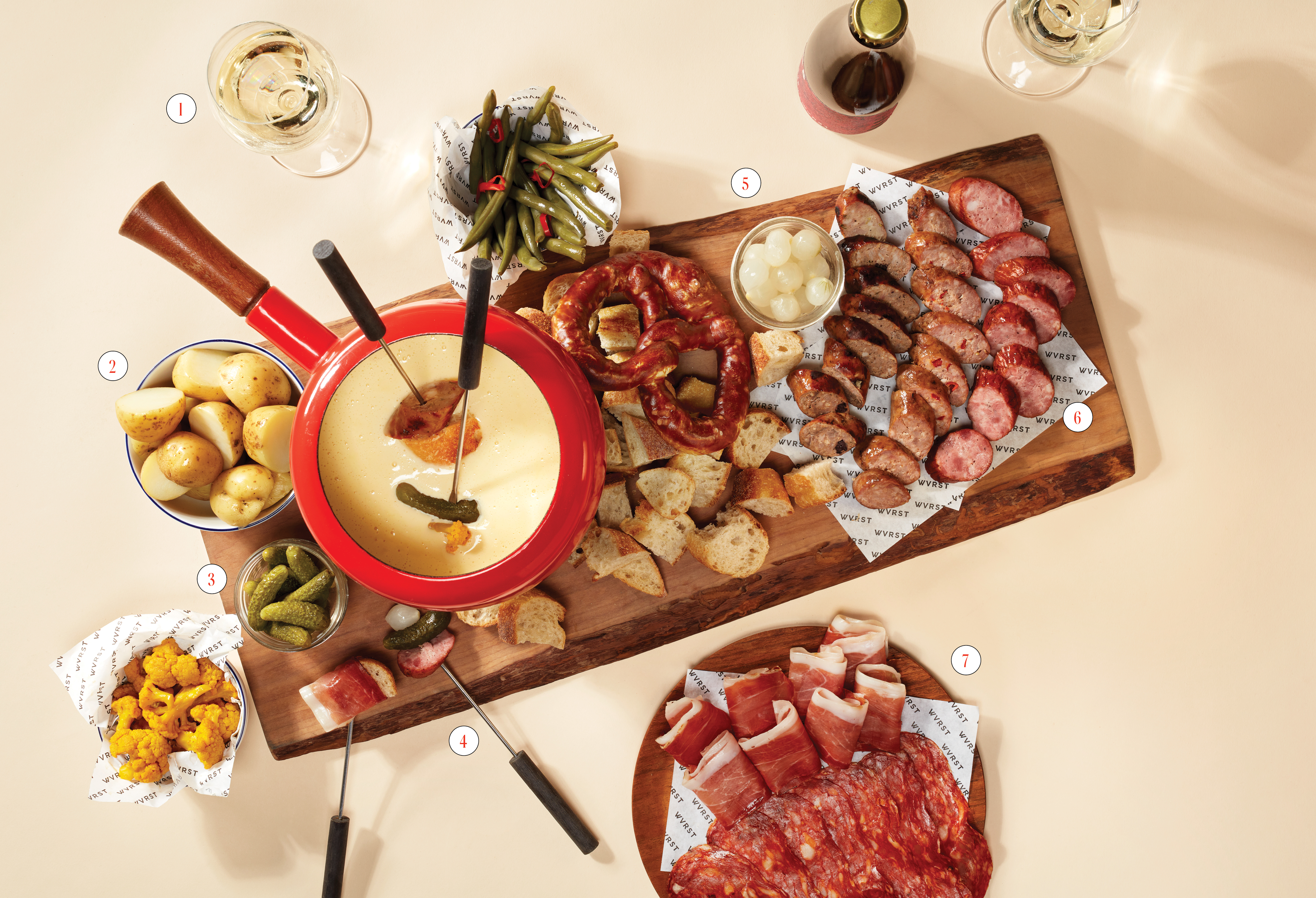 1. According to Swiss myth, if you drink anything except for nearly room-temp white wine, kirsch (a cherry-based brandy) or herbal tea with fondue, the cheese will coagulate in your belly and cause indigestion. Lanzillotta suggests pairing it with Communal 5, a refreshing collaboration lager from Wvrst and Bloordale’s Burdock Brewery made with sea buckthorn.

2. The starches that come with every order include baguette slices, steamed mini potatoes and delightfully chewy soft pretzels—made in house the traditional way, not with baking soda but with lye.

3. Cornichons and cipollini come with every fondue order. Skewer them alongside salumi for a vinegary pucker to temper the saltiness.

4. Wvrst has three fondues on the menu. We recommend the Wvrst Original, which is made with smoked gouda and raclette, a semi-firm Swiss cow cheese that Alpine folk have been melting since 1291. Its smoky and lightly nutty flavour adds oomph to every morsel it envelops.

5. House-made pickled veg, like garlic green beans and curried cauliflower, can be added to any order. These palate cleansers cut through the fat and provide a crunchy contrast to all that unctuous cheese.

6. There are two dozen house-made sausages on offer here. We recommend accentuating a spread with any of the following links, in order of most to least indulgent: duck and foie gras, Calabrian-chili-studded Tamworth pork, Kranjska (a smoked pork-and-beef Polish sausage) or, for something a little leaner, bison blueberry maple.

Get cozy in a booth at this frozen-in-time diner-slash-French-bistro on Queen West. Once available only on the late-night menu, Le Swan’s fondue can now be ordered as an early bird supper—because not only night owls should have the pleasure. The addition of mozzarella to the traditional blend of Gruyère and Swiss lends a visually pleasing cheesy pull to the melted mix. Comes with hunks of toasted Pullman loaf for dipping, with the option to add roasted broccoli. Serves four. $50. leswan.ca

Thanks to some culinary alchemy, cashews, Roquefort mould cultures and five weeks in a cheese cave that’s never seen so much as a drop of dairy, chef Fernando Anrango has created a phenomenal faux fondue. Served in a mini sourdough bagel bread bowl, this dairy-free dip starts off funky and tangy and ends with the tingling warmth of white pepper. As the opener to Avelo’s multi-course winter tasting menu, it sets the bar high for what follows. Tasting menus from $110 a person. avelorestaurant.com

This trad Swiss fondue (Gruyère, Emmental and Appenzeller) is best eaten in the solarium, a glass-encased winter garden that’s kept toasty (albeit a few degrees below the dining room). Snuggle up in one of the blankets provided and enjoy the ideal venue—basically an inverse snow globe—in which to savour this Alpine staple, served with summer sausage, apple or pear, radishes, pickles, and sourdough. Serves two. $46. barpiquette.com

This Rosedale Bistro has two savoury options: a classic Emmental-­Gruyère blend and something a bit bolder. Their mix of Danish blue cheese, Ontario double-cream brie and kirsch has just the right hint of funk. A sweet morsel—like a hunk of the walnut raisin bread the fondue comes with—makes for a perfectly balanced bite. Serves two to four. $30. carensrosedale.com

Proving that fondue can be finger food, this French restaurant in the Distillery District serves a pot of melted La Sauvagine (a Québécois washed-rind cow’s milk cheese) with deep-fried asparagus. The spears are breaded in sourdough crumbs, providing ample texture for the creamy goodness to glom onto. Serves one. $23. clunybistro.com