Like many Chinatown stories, this one begins where another ends.

I’m at Yueh Tung—the Hakka Chinese restaurant where I last ate—with Chinatown historians Arlene and Leo Chan. We’re starting here, in the shadow of City Hall, because it was once home to Kwong Chow restaurant (1959-1981), run by Arlene Chan’s mother, Jean Lumb, who was a tireless activist for the Canadian Chinese community and recipient of the Order of Canada.

“This was the site of our first Chinatown,” Arlene says. “Up until the Second World War, Chinatown was considered a place you didn’t go to, unless you were Chinese.”

Back then, there were only about 2,000 Chinese in the area, mostly men from the province of Guangdong, thanks to the head tax introduced in 1885 and in effect until 1923. From then until 1947 (when Canada needed to conform to U.N. charter rules), Chinese immigration was barred by the Chinese Immigration Act, which we know as the Chinese Exclusion Act.

Our five-stop tour today traces the history of immigration from China to Toronto’s Chinatown through five dishes. 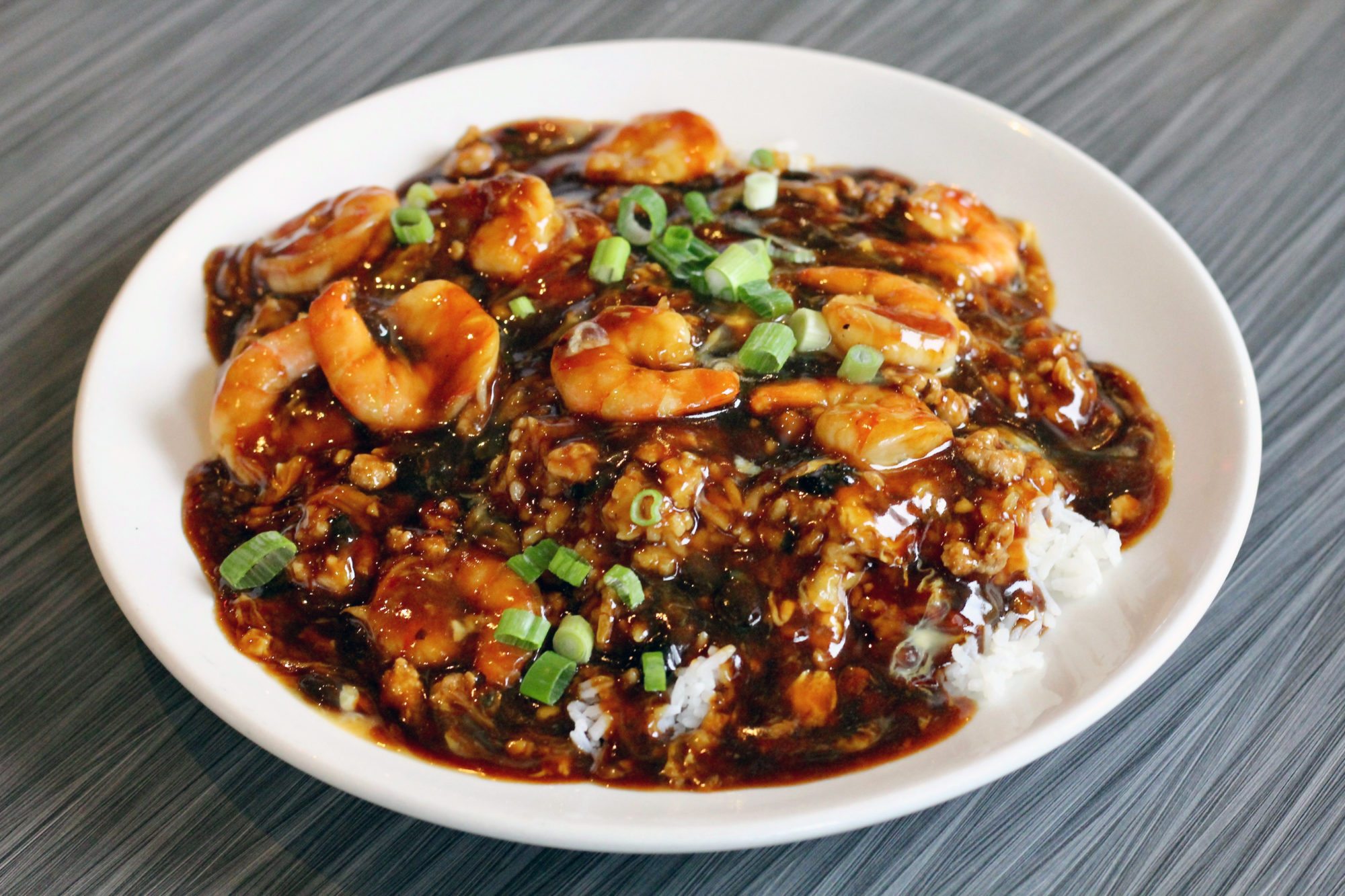 Chef Joanne Liu, along with her sister, Jeanette, is gradually taking over Yueh Tung from her parents. Though she grew up working in the restaurant, she only learns now, as she sets a bowl of shrimp with lobster sauce in front of us, why there has never been any actual lobster in the dish.

“When Chinese people came to North America, to San Francisco, Boston, New York, Toronto, they came across this weird creature called lobster,” Leo says, untying his tartan scarf. “So they cooked a dish called ‘lobster Cantonese style’, a lobster chopped up with green onion, ginger and soy sauce. North Americans loved it. But the people that worked in restaurants couldn’t afford to eat lobster, so they said, ‘why don’t we have just the sauce?’ And they called that the lobster sauce because it’s the sauce for the lobster. Later, when some of them had a little bit more money, they said, ‘instead of lobster we’re going to throw in some shrimp’. So, shrimp with lobster sauce.”

The dish—cornstarch-thickened sauce studded with black beans, garlic and ground pork—requires a deft touch with the wok’s heat. Add the egg too soon, or on too high a temperature, and it coagulates. Liu’s version shows faint streaks of gold, the egg hovering ghostlike between a solid and liquid state. 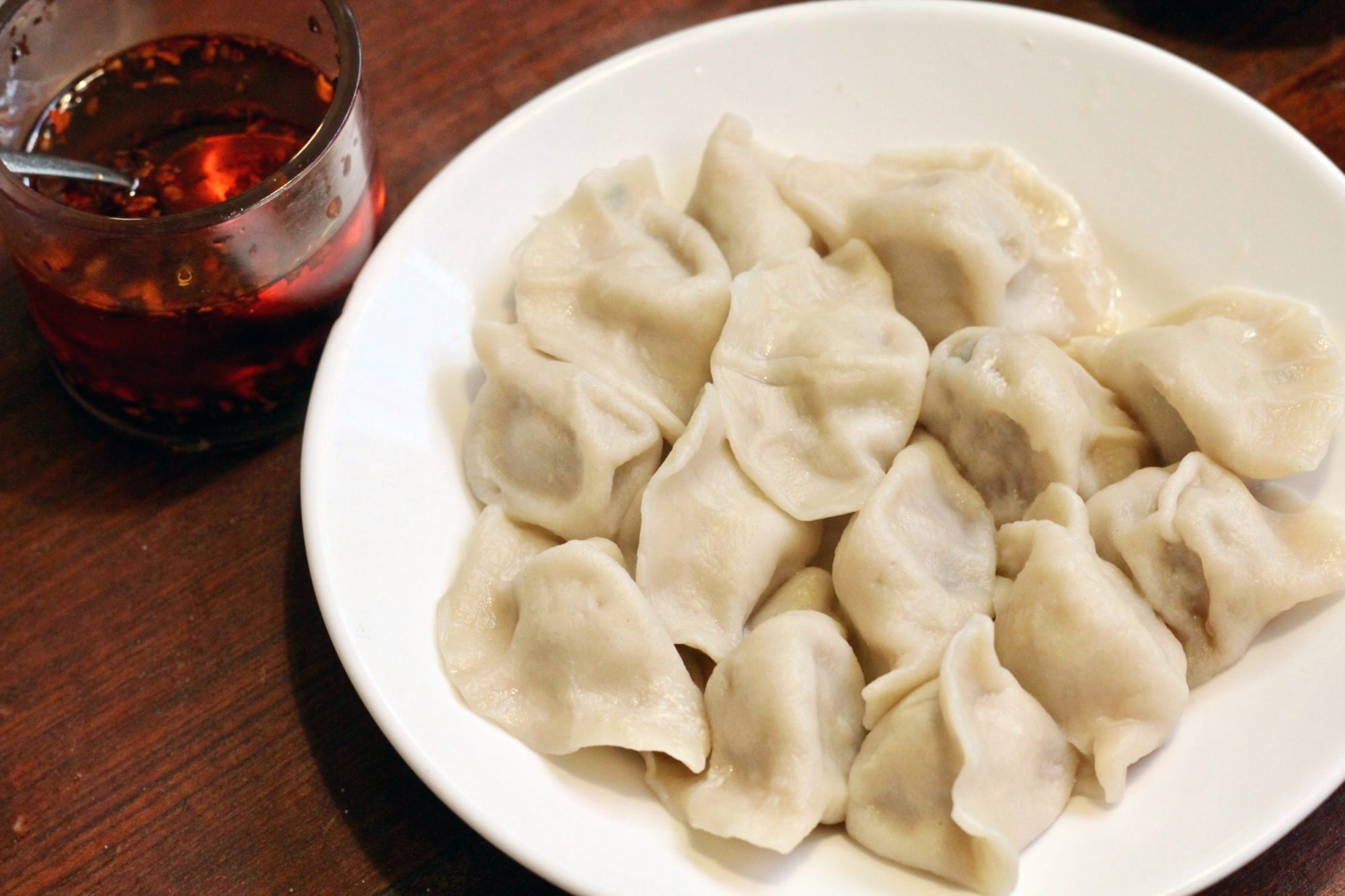 A few blocks away, we’re at Mother’s Dumplings, discussing a transformative moment in immigration: the point system introduced in 1967, when applicants were judged on points for education, linguistic aptitude and skills related to the Canadian economy.

“That was the first time Chinese were able to apply to Canada on equal footing with anybody else,” Arlene says. “Then in 1985, China opened the door and said you can apply to leave China. Until then China was very selective about who could leave.”

That was what Zhen Feng was waiting for.

Before World War II, her hometown of Shenyang in the northeast Liaoning province was under Japanese rule. After the communist revolution, her father, an entrepreneur who had started out as a horse jockey, was targeted as a collaborator.

“They say he worked with the Japanese,” says Feng. “I don’t think so.”

Growing up, Feng couldn’t understand the persecution of her family. As soon as she had the opportunity to emigrate, she took it. In Canada, she worked as a housekeeper, saving money. Even when she opened Mother’s Dumplings in 2005, she continued to work full time, cleaning rooms at the Holiday Inn, balancing the restaurant investment by shifting credit card debt back and forth with her husband.

Mother’s Dumplings went on to become a popular staple of the neighbourhood. The kitchen makes about 3,000 wheat flour dumplings every day, based on recipes from Feng’s mother. She feeds us a plate of her best seller: dumplings filled with a mixture of pork and napa cabbage, seasoned with soy sauce, sesame oil, anise, green onion, ginger and cooking wine.

Steam from the plate rises up to greet us. We dip them in soy sauce and black vinegar, wolfing the hot bundles down before running down the street to our next stop. 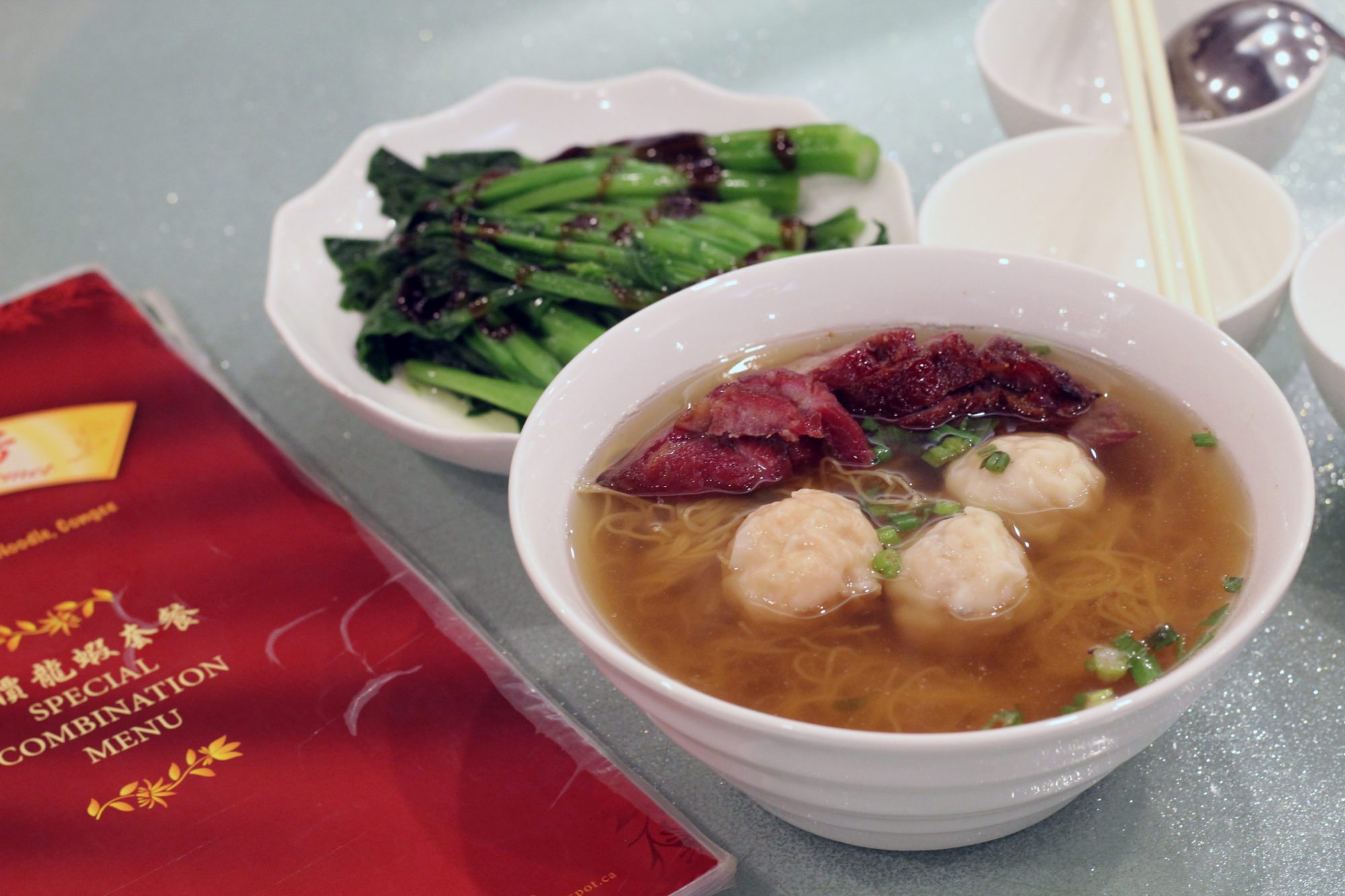 “This restaurant reflects the waves of Chinese immigrants that have come here after 1967,” says Arlene, gesturing around the bright and bustling House of Gourmet, full of diners slurping noodles with with strangers. “They came from Taiwan in the ‘70s, then Hakka Chinese from Jamaica, a lot of Fujianese smuggled out in the late 1990s. House of Gourmet is reflective of this diversity. It has pretty much every Chinese cuisine. Hong Kong style, Chinese Canadian dishes, Shanghainese dishes, barbecue, seafood, Cantonese, Taishanese.”

There are two menus at House of Gourmet, and between them, more than 500 items. Co-owner Anna Chen, joining us at the table with bowls of broth, wontons, noodles and barbecue pork, says she wouldn’t dream of cutting down the menu.

The custom-made egg noodles rest in a fish-and-ginger broth. A server uses a metal ladle to cut the noodles (a hot tip for anyone frustrated at moving noodles into sharing bowls). Catering to modern health trends, Chen has eliminated pork from the wontons, which are stuffed with shrimp, sesame and fish powder. 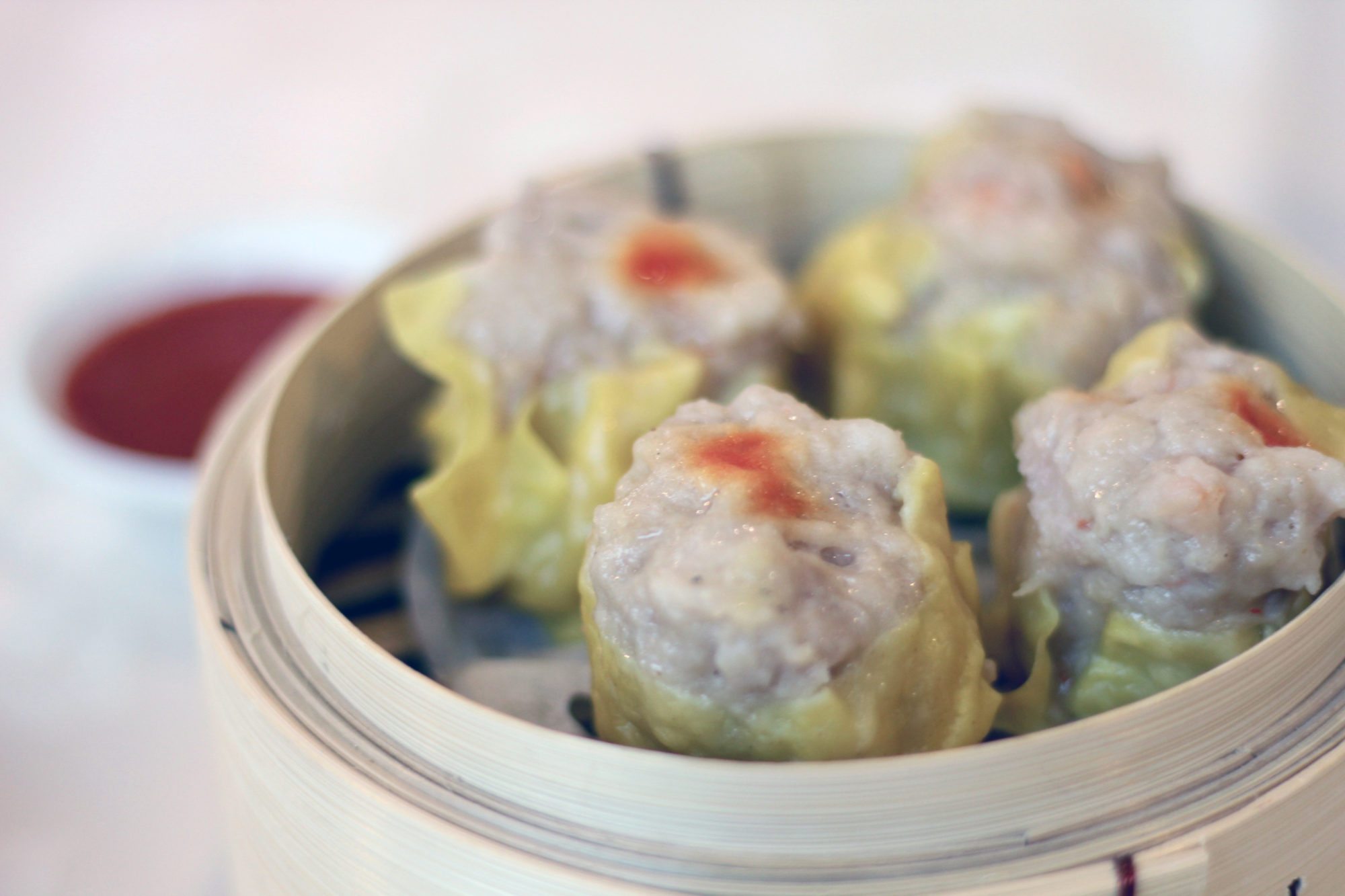 Across the street, up on the third floor of Dragon City mall, Sky Dragon remains a bit of a hidden gem. Half of the roof is outdoor space that would make a stellar patio. But owner Fanny Liu isn’t interested. “The skyline view is better than additional seating,” says Liu, with Leo translating from Cantonese.

In the early 1990s, as Hong Kong money came flooding into Toronto, the location was the exclusive, private Mandarin Club. In the lobby, there was a cabinet where members stored their personal bottles of cognac. “There would be a gold chain with ‘Dr. Wong’ or whatever on it,” Leo says. “A status thing in Hong Kong. It’s to show off that you’re a member and have good taste.”

After the Mandarin Club closed, the site transformed into a dim sum restaurant, eventually bought by Liu, who came to Canada in 1992.

She serves the open-topped rice flour dumplings bulging with shrimp, with fellow dim-sum dumpling har gow, and beef ribs, deep-fried, braised and shiny with a sauce of honey and soy. The room, which has cart service at peak hours, seats hundreds. I ask her how many customers she serves on a typical Saturday.

Most Toronto restaurateurs are eager to boast about how many covers they do. But things are different in this neighbourhood.

Liu explains: “There’s a lot of jealousy in the industry. Whatever number is quoted, people will say I exaggerate. There is a saying, ‘if the tree is big, the wind will hurt the tree’. Just say we are very busy.” 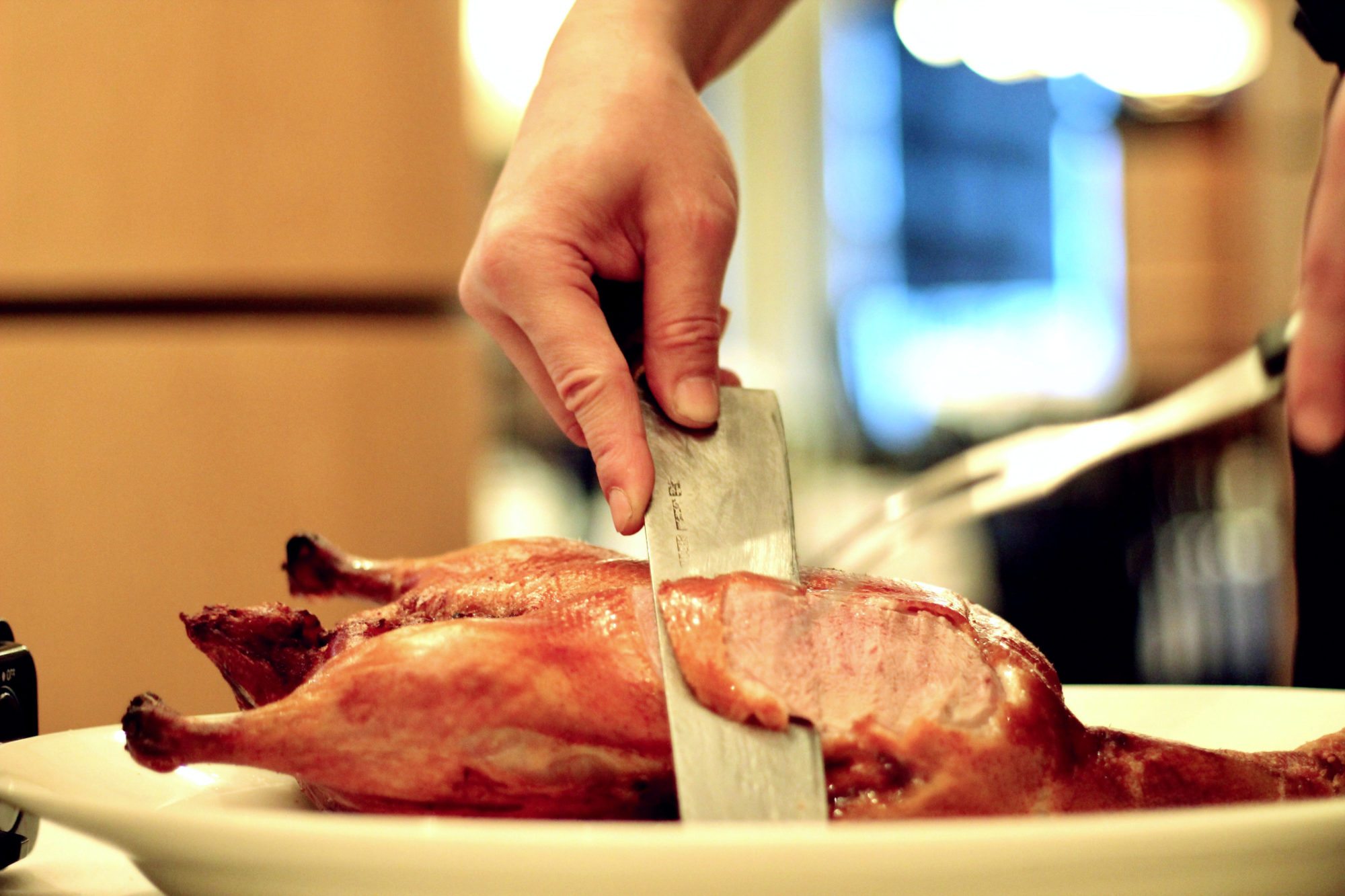 For a brief period in the 1990s, wealthy Hong Kong residents, nervous about the handover of their territory from the British over to China, whooshed into Toronto. Lai Wah Heen was made to cater to them.

“At that time, all the richest people in Hong Kong went to hotel restaurants,” says Canson Tsang, who was the food and beverage director at the hotel where Lai Wah Heen is located, before buying the restaurant four years ago. “Building this type of restaurant in a hotel is related to the history of the Hong Kong handover in 1997.”

But the anxiety didn’t last. And the demographic of Tsang’s clientele has completely changed in the last 20 years.

“In the 1990s, all the Hong Kong money comes in,” says Tsang as he carves Peking duck tableside. “The reason they were coming is that they were not willing to be ruled by the mainland Chinese government. But then they saw that not much had changed and the opportunity was still there. So most of them went back to Hong Kong after the first 10 years. This group has been replaced by mainland Chinese in the past 10 to 15 years.”

Tsang’s knife weaves through the duck like he’s crocheting. With every flash of the blade, he removes a slice with an equal portion of meat and crispy skin. Each one is mounted on a warm crepe, garnished with a few slivers of scallion and cucumber and a dollop of hoisin sauce.

“This is what Richard Nixon did for Chinese food,” Arlene says. “You have to give a lot of credit to Richard Nixon, who visited China in 1972. He talked about this great banquet meal he had and within 24 hours … ”

Leo picks up the thread.

The Chans see the Nixon moment as the catalyst for the acceptance and embrace of Chinese food in North America.

“Everyone has woks and chopsticks at home now. You used to have to go to Chinatown to buy Chinese food. Now you can go to Loblaws.”