Inside a gigantic new Riverdale bar, with a nine-hole bocce ball course and gourmet restaurant

Inside a gigantic new Riverdale bar, with a nine-hole bocce ball course and gourmet restaurant

Five years ago, Ryan Dolan was a banker living in Brooklyn, who noticed a playful trend in his neighbourhood: local watering holes that doubled as bocce ball courts. “There was this vibrant bocce culture in bars,” he says. “It was a ton of fun.” The Burlington native eventually decided to move back to Toronto, and started thinking about launching a place of his own—only on a much larger scale. To him, the sport, at its best, is played outdoors in the backyard or at the cottage, on rolling, inconsistent terrain that may have a rogue boulder in the way, or an annoying drop at the end. So, he set out to break the typical bocce ball bar mold, with groups playing back-and-forth on a few single courts crammed into a corner.

He spent a few years developing his ideal version of the sport—a blend of bocce ball and mini golf—and finding a downtown space large enough to bring his vision to life. Lob opened at the end of summer in a sprawling, 10,000-square-foot basement space at Queen and Broadview, and is an indoor paradise for lawn game enthusiasts. 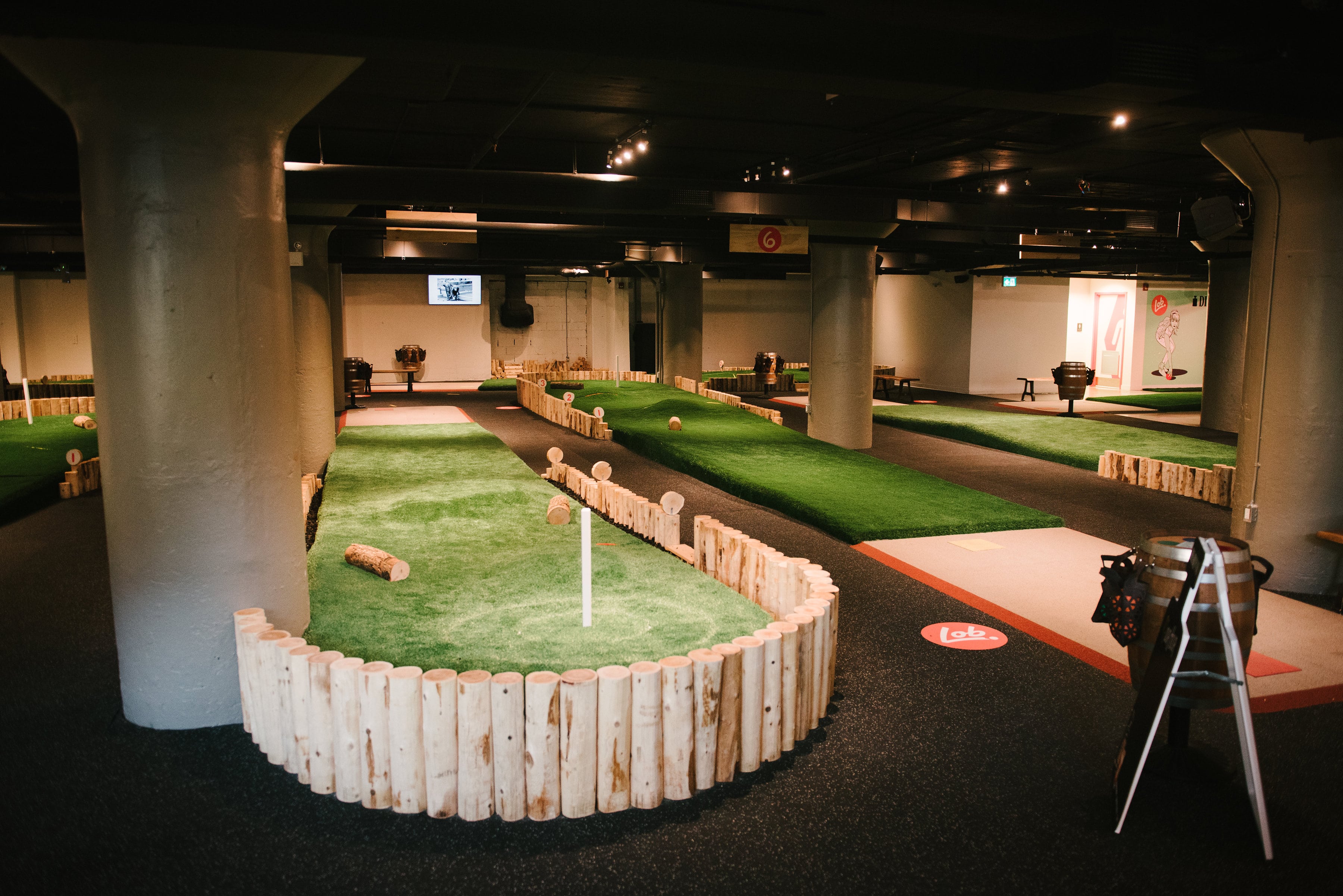 Dolan partnered with Vantage Venues, a Toronto events firm that’s has always prided themselves on innovation. Vantage Venues was the first company to transform commercial real estate into a downtown conference centre, and offer a ton of options for meetings and events. They wanted to bring something new to the market, and recognized the uniqueness of Lob and the potential for awesome corporate events.

Before moving in, Dolan renovated extensively, adding a state-of-the-art kitchen and opening up the space by tearing down any interior walls. He enlisted a local designer working in Hong Kong to create a prototype of the course, and sourced 3D-printed turf greens from a company in Etobicoke. “There was a lot of mechanical work involved,” he says. “Some might say it was crazy.” Now, there are nine totally unique holes, each with their own nuances and challenges, onto which players toss a specially made, extra-grippy bocce ball. “We call it the Goldilocks ball,” says Dolan. “It’s the perfect size and weight, and surface is a little easier to handle.”

Vantage Venues manages the food and beverage portion of the space. Dolan and Vantage’s Managing Director, Andrew Hodd, have been friends for over 20 years, and collaborated on an 80-seat kitchen concept called Track 10 that puts a local, handmade spin on elevated pub fare. “We knew people would want traditional snacks like burgers and nachos, but we wanted to deliver the best-quality version of those things,” says Hodd. “Everything is made from scratch, down to the potato chips for the nachos, which are fried and toasted here.” Kyle McClure, Executive Chef of Vantage Venues who previously worked at Opus and the Four Seasons, developed the menu and will be overseeing all kitchen operations. He’s keen to give Lob’s comfort food his signature elegant twist.

The owners wanted the vibe to feel like a Canadian backyard, and there are plenty of sharable dishes for teams to fuel up on before a round, or dive into afterwards. For apps, pretzel bites are served with beer cheese and smoked mustard, and a sausage board comes with pickled vegetables. Main entrées include dishes like crispy shitake mushroom tacos and chimichurri sous-vide flank steak with sautéed greens. 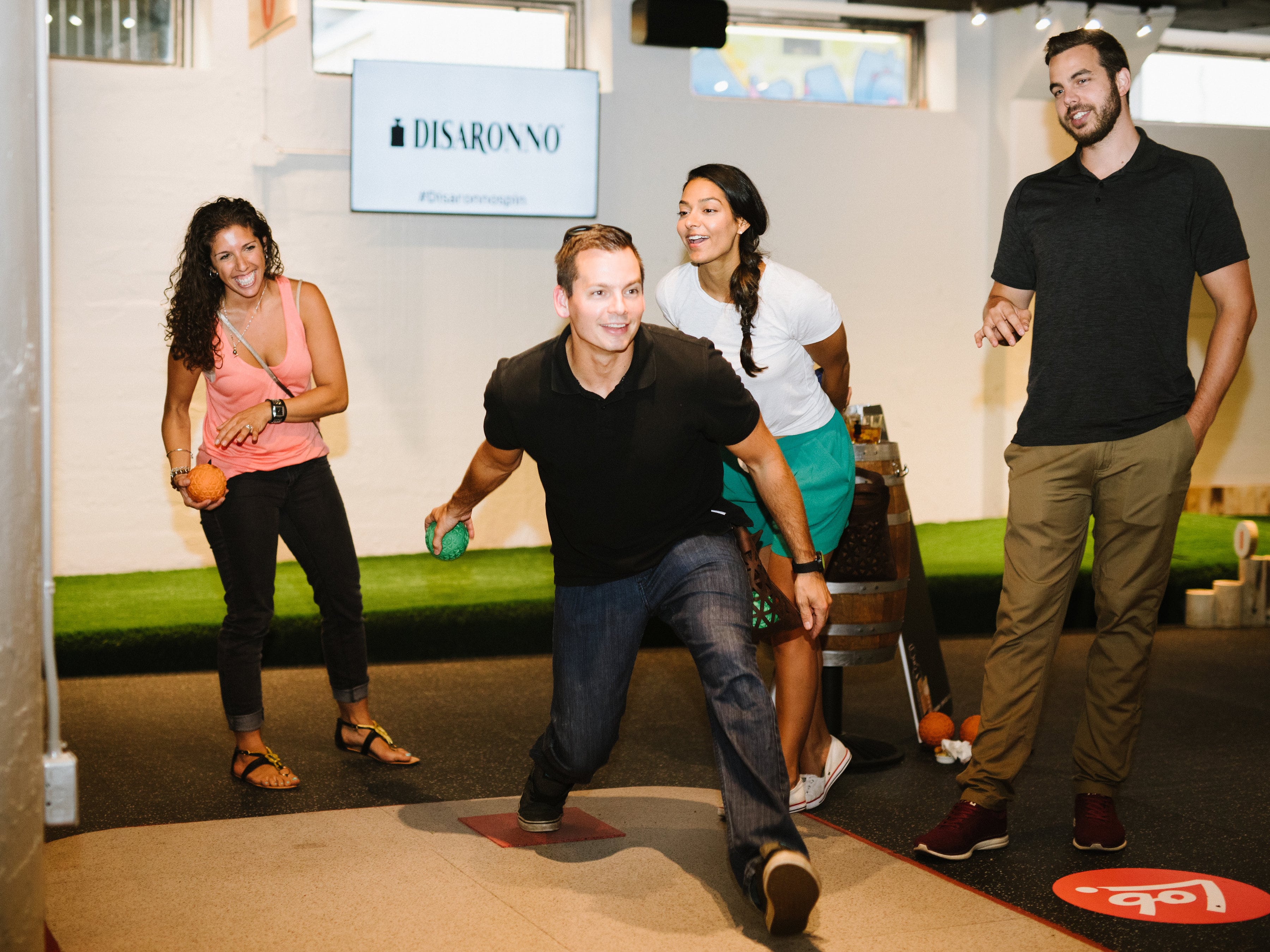 The beverages are also as local as possible, and come from east-end breweries as close as a block away. Right now, there’s Yuzu Pale Ale from Radical Road, Riverside Pilsner from Saulter Street Brewery, and Greenwood IPA from Left Field Brewery. As for cocktails, the restaurant uses gin and vodka from nearby distillery Spirit of York to make drinks like the Leslieville mule, with rosemary-infused simple syrup, lime juice and ginger beer.

Overall, what makes the place especially appropriate for casual gatherings and corporate entertainment is its welcoming, playful atmosphere. Dolan chose bocce ball specifically because of its inclusive, social nature: “It doesn’t demand that you’re 6’5 or super-strong,” he says. “It’s all about the joy of simple competition.”