Barclay Robinson talks about what makes the wine so special

Foreign Affair Winery is known for its big Italian-style reds. One bottle of theirs, the Dream 2015, is particularly popular, and won a gold medal at the Ontario Wine Awards this year. This Bordeaux blend just sold out at the winery but luckily has a release coming up at the LCBO on November 10. We caught up with the winemaker, Barclay Robinson, to chat about what makes the wine so sought after.

Can you give us a synopsis of how you ended up the head winemaker at Foreign Affair?
My passion was always the European styles—French, Italian, Spanish, but specifically the Amarones. After doing my sommelier training in the mid-90s and my oenology degree at Brock University, I met Len and Marisa [Crispino, the founders of Foreign Affair] in 2013. They were looking for a winemaker and were already making Amarone-styled wines, the Italian-inspired winemaking that sets us apart from other wineries. It was serendipitous.

What don’t people get about your job?
Most people just think I taste wine. But the reality is that it’s basically fancy farming. You’re in the vineyard throughout the growing season. It’s a lot of hands-on, active work.

What makes the Dream 2015 so special?
It’s an interesting vintage because we had a very cold winter, so there was a reduced crop. But it was also a very even ripening year. The berries weren’t as big, but they gave this wonderful complexity and concentration of flavours, because you had more skin to juice. There just wasn’t a lot of it!

Is there a story behind the name?
Foreign Affair Winery started with a dream and was conceived by Len and Marisa while they were going through a health crisis. Though winemaking was completely different from what they did for their working lives, they decided to go after their dream no matter what.

If we wanted to sound like a true oenophile, how would we describe the taste?
On the nose you’re going to get black cherry and blackberry, plus a little bit of eucalyptus on the edges and a subtle hint of leather. On the palate, you’ll get all those big berry notes as well, plus some fig and spices. As you move to the finish, you’re going to feel the oak, but it pops up only in the background. I tend to make wines that promote harmony and balance. Of course you’ve also got these big tannins, but they’re subtle, complex and elegant.

To maximize enjoyment, in what situation should it be sipped?
I think all wine should be enjoyed with friends and family. The cool thing about wine is you want to share what you enjoy about it with the people you care about. That’s what it’s all about: connecting people and connecting flavours.

Let’s say we want to serve the wine at a dinner party. What should I cook?
I like a big prime rib roast with a nice béarnaise sauce.

What are some more unexpected food pairings for this wine?
It’ll also go really well with grilled portobello mushrooms or wild mushroom risotto. But the one pairing that really surprised me was after Christmas dinner one year, when I made a leftover sandwich from stuffing, turkey and cranberry sauce. It went exceptionally well with that.

If this wine were a celebrity who would it be and why?
I’d have to say Bradley Cooper. At first glance, he seems like just another Hollywood guy. But the more projects I’ve seen him in the more complex and versatile I realize he is. There’s more than meets the eye, and it’s the same with this wine. At first sip it’s a big full red wine, but the more time you spend with it the more surprises you’ll experience. 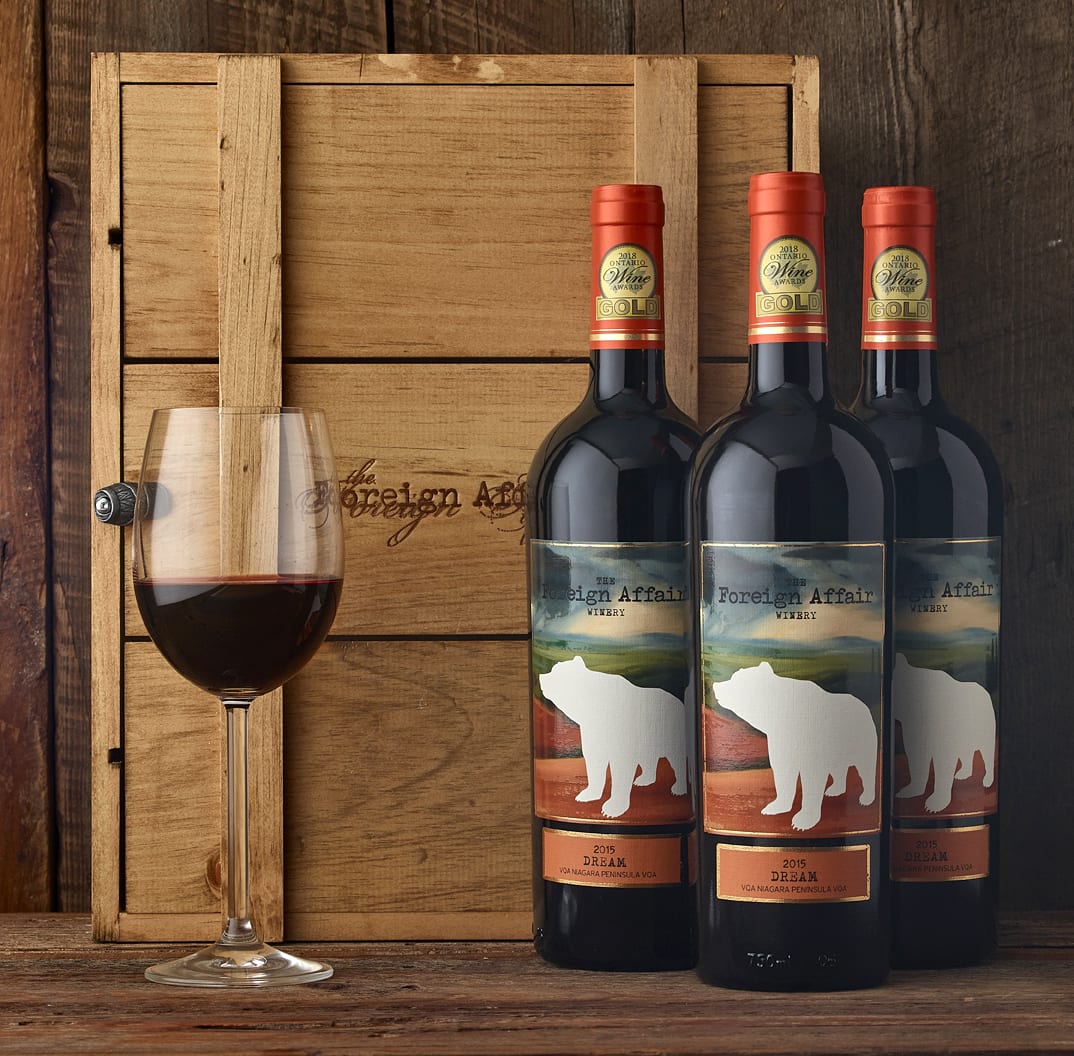 The Dream 2015 is blend of Cabernet Sauvignon, Cabernet Franc, Merlot and Petit Verdot, with 15% coming from grapes dried for 60 days after harvest. This wine spent 16 months maturing in oak barrels. Enjoy now or continue to cellar through to the year 2025.